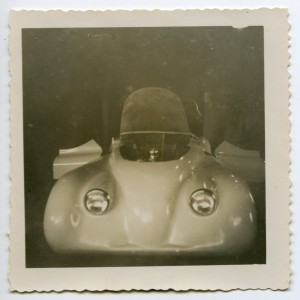 Recently I was lucky enough to be contacted by another relative of James F. Craig who, along with John “Buzz” Buzby, designed and built the “Gazelle” sports car.  Here’s the note I received:

I happened upon your website while researching a fiberglass body design, originally named the Gazelle, made by my late grandfather, James F. Craig.

It’s a really neat piece of family history to explore and I am very excited to have found so much information about it on your website.  I appreciate the kind welcome to your forum!

Great to meet you, too, Laura 🙂

Laura had been researching her grandfather’s car and found the article that is the subject of today’s story.  It was published in the Red Bank Register Newspaper of New Jersey in February ’53, and has more detail about the Gazelle and its development than I’ve ever seen before.

Way to go Laura!  What a great find to share with us.

Laura also has at least one picture of her mother with the Gazelle, so we may be seeing some more info about this special car and the men who built it soon – and their families – too.  Let’s see what the newspaper article had to say about James F. Craig and his sports car – the Gazelle.

Rumson New Jersey: When the World Sports Car show opens February 21st 1953 in Madison Square Garden, New York City, probably one of the most unusual models on the display floor will be the Gazelle, custom made fiberglass body being produced by James Craig, operator of the Rumson Auto Body shop on the Avenue of Two Rivers, here.

The first of the new bodies was turned out this week.  Its completion culminates years of planning and work by Mr. Craig, who long has been associated with the automobile body business.  He expects to have the cars in full production by March 1st, 1953. 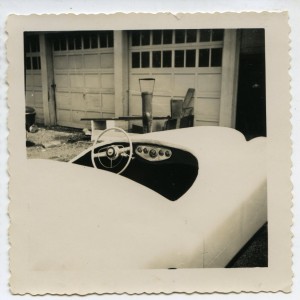 The Gazelle, which features the long low lines of foreign made sports cars, resembles in some aspects the British Jaguar.  However, it embodies the family car practicality of the American made car in that its full width front seat can comfortably carry three persons.

Use of the rear trunk compartment as a rumble seat can increase the passenger capacity.  The plastic body is made to fit over a rebuilt frame of 1942 through 1948 Fords.  These frames, explains the producer, are best adapted to the sports car field because of the solid front axle and ability to hold the road.

The Gazelle’s “souped up” Mercury engine develops 170 horsepower which gives the 1500 pound car exceptional acceleration.  The plastic body is produced in a single molded piece.  The doors, trunk lid and hood are then cut out by hand.

The car is fitted with a “hard” convertible top which slides out of sight behind the rear seat.  The doors, equipped with eight-pound loaded springs, telescope into the fender at the touch of a button.  When ordered complete, the Gazelle comes with the Ford frame, Mercury engine, a single piece curved windshield and custom made leather upholstery.

Price for the complete car will be approximately $2100.  Optional equipment, which may be acquired at additional cost, includes wire wheels, continental type spare tire mounted on the rear and extra equipment on the dashboard. The cars will be available with the new frame and engine at higher price.

The car, which evolved from the drawing board through a full size plaster mold to the finished product, is the realization of Mr. Craig’s desire to create a modern sports car which will be within the reach of the average sports car enthusiast and capable of fulfilling the needs of the American family which wants “something different” in an automobile.

Mr. Craig, who already has taken several orders for the Gazelle, expects to turn out eight or ten complete cars a week once in production.  The cars are fitted in most cases with stock parts from American manufacturers to make for simple replacement.

Pointing to the advantages of the plastic body, the producer explains it is lighter than metal, will not dent, will stand up well under normal conditions, will not be affected by the weather and is impervious to acids and other destructive agents. 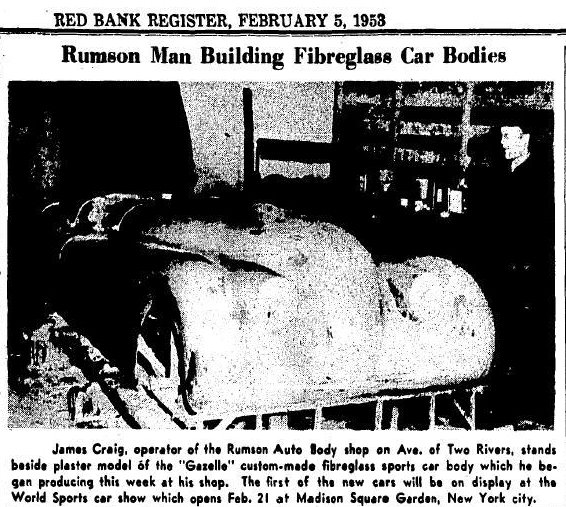 In case of an accident in which part of the body is torn, repairs can be made by the owner with a repair kit which comes with the car.  In case of a rip in the body, according to Mr. Craig, a piece of fiberglass material is placed over the damaged area and painted with a plastic solution.  This is sanded smooth when hard and painted.

Mr. Craig believes he is the only producer of a plastic automobile body on the East Coast.  Fiberglass bodies have been in production in California several years and, according to Mr. Craig, are gaining steadily in popularity.

A resident of 160 East River Road, Mr. Craig has had 30 years’ metal working experience including 25 years as an aircraft loftsman.  For six years he was in charge of “mock up” work at the Republic aircraft company plant, Farmingdale Long Island.

He has operated his own shop approximately a year prior to which he was associated with the Wildanger Company in Red Bank. 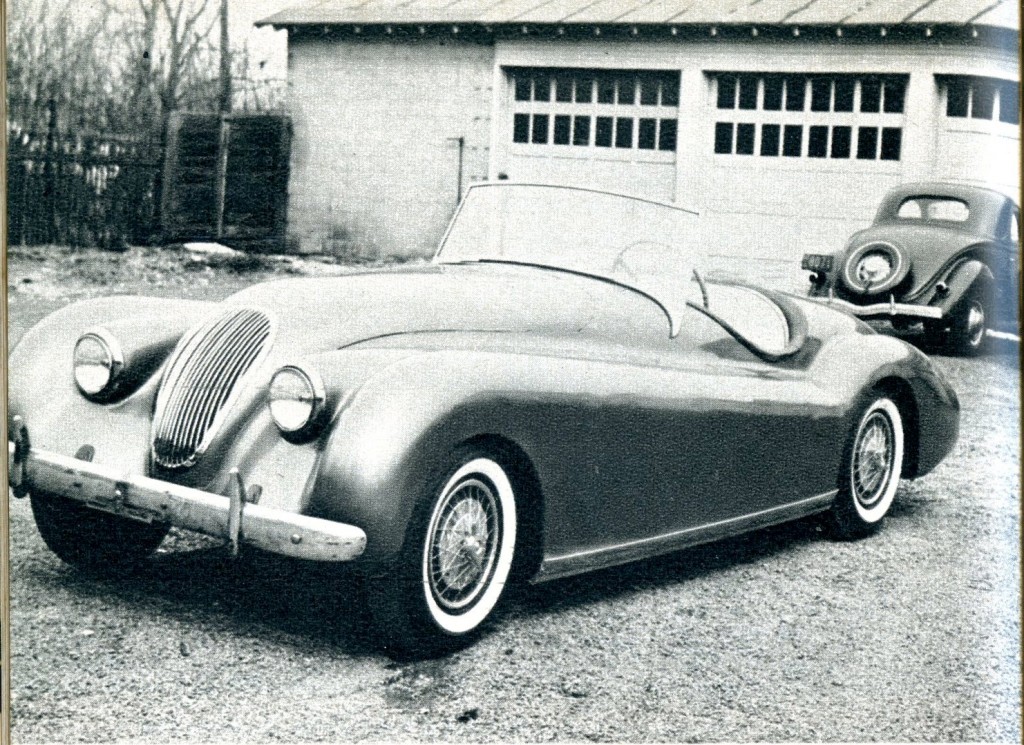 What a great piece of history that Laura found, and I’m very appreciative of her sharing this information with us today.  Let’s hope she finds one or more vintage pictures too!  How cool that will be….

Here are some thoughts on the article and its content, based on interviews with Jim Craig’s partner who co-built the car – John “Buzz” Buzby:

* The “sliding hardtop” and “telescoping doors” did not make it into the prototype – or subsequent cars either.

* James Craig’s partner, John “Buzz” Buzby, in building the Gazelle, was 23 years old when he read this article (he was born on April 15, 1929).  After reading it, he drove straight away to see the car and Jim Craig.  Jim immediately offered “Buzz” a job and Buzz helped complete the car in the Summer of  ’53.

* The wheelbase of the car is interesting.  Although it looks like the Jaguar XK 120, it is much larger.  The Jag has a wheelbase of 102 inches while the Gazelle’s wheelbase was 116 inches.  The Gazelle was designed to fit on an unmodified Ford chassis, and as such would have been one of the largest fiberglass bodied sports cars built in America in the early to mid ’50s.  The only car that would have beat it in size was the Maverick Sportster tipping the wheelbase scales at around 127 inches. 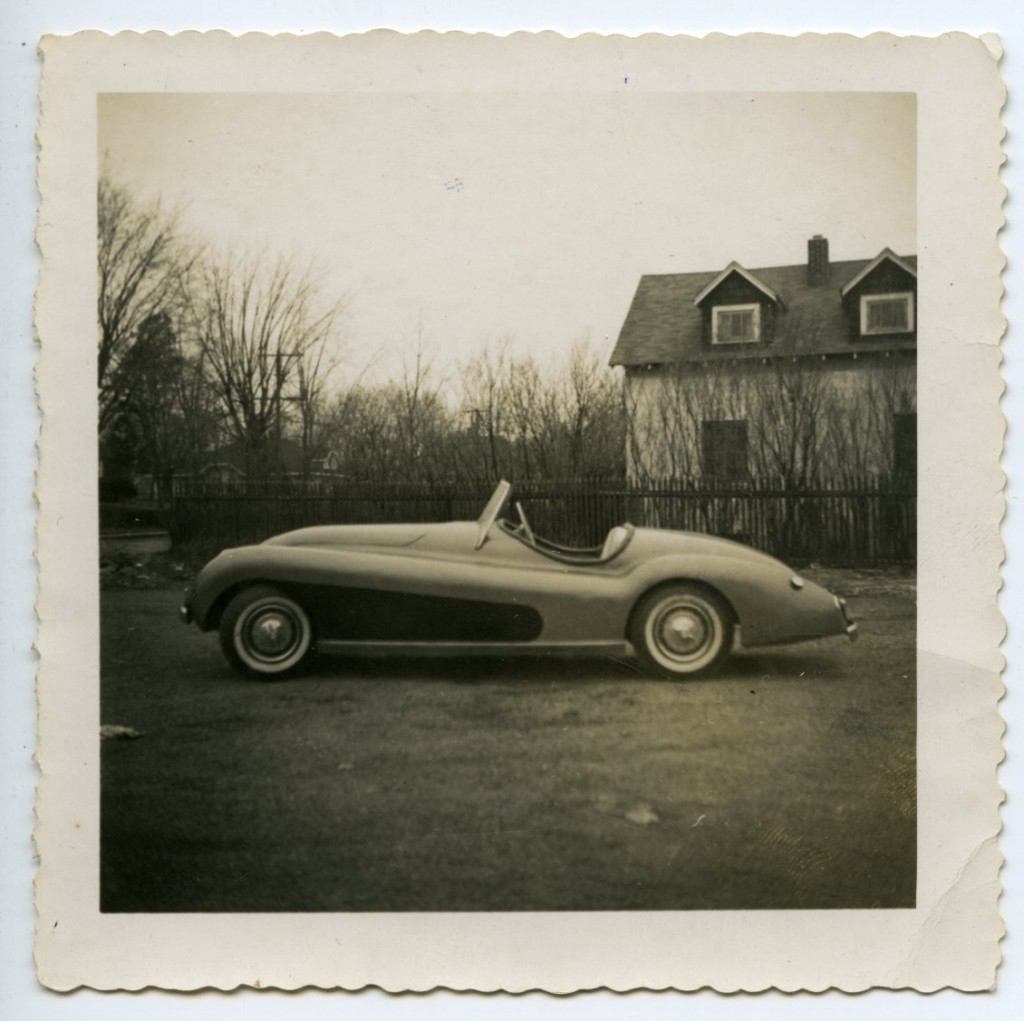 Thanks again to Laura Cassell for her help in putting this story together, and to John “Buzz” Buzby for his help with his review of his memories of the times and this fascinating long-lost sports car. 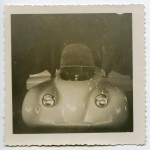 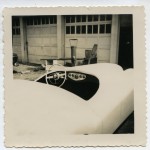 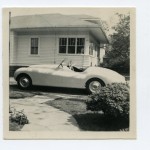 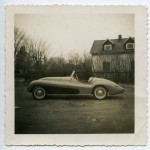 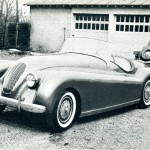 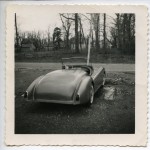 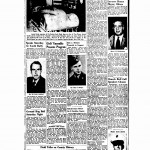 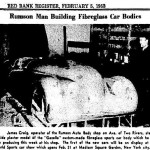 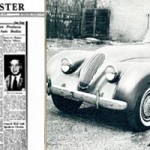