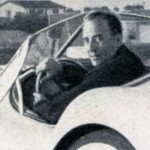 Sorting out history.  Sometimes it looks like the game of 52 card pick-up.  You gather everything from everywhere and see what you’ve got.  Which stories are true?  Which ones are false?  Which ones are interesting?   Which ones make you laugh.  I remember sharing a story with Bill Tritt and his son Greg that someone had written about the history of Tritt and Glasspar.  It made Bill and Greg laugh so hard, I thought I might have to visit them both in the hospital!

Much has been written about fiberglass cars from the 50’s – and there’s a lot to correct, extend, and set straight.  Rick D’Louhy and I are doing this one car at a time – and with the help of each and every one of you.  To this end….we’re indebted by your support and interest in each of these stories. 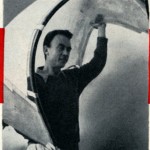 To us, the history of fiberglass sports cars starts with the first Glasspar G2 – the Brooks Boxer.   It may not be the first fiberglass/plastic car produced – Ford’s 1941 concept beat it out by a bit and so did Darrin’s 1946 convertible, and the Project Y Stout car too.  And…from what Steve Cowdin and I can tell, the Wasp (and maybe the Skorpion) was built earlier than the Glasspar Boxer or the Lancer – but more about that in a later story.

Rick and I start with the Glasspar G2 for many reasons: 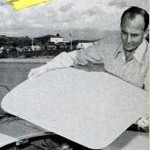 To us, the Glasspar G2 is the father of all fiberglass sports cars for all of these reasons, and Bill Tritt is the person who made this happen.  But how did this happen?  Was it a business decision from the start or an opportunity that presented itself to a smart entrepreneur?  And how do you go about researching something that happened about 60 years ago or more that is sparsely reported – at least in terms of the very first car – the Brooks Boxer?  All good questions.

We assumed it would be easy to learn about the first G2 – the Brooks Boxer – right?  We just have to find this information, and figure out where to look and who to ask.  But there’s often no road map.  What I would give for a GPS – if it would aid in our research in any way.  So let’s explore what we know and have learned about the Brooks Boxer – piece by piece.  This will be the first in a series of stories about Bill Tritt, Ken Brooks (who commissioned the Brooks Boxer), Glasspar, and of course the Brooks Boxer. 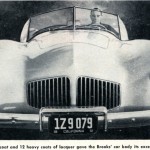 Who was Ken Brooks?  Unfortunately Ken is most likely not with us anymore.  If he was, he would be somewhere between 110 and 120 years old as of 2010.  So we have to search elsewhere for this answer.  Luckily, we have our good friend John Knebel.

John Knebel is a Glasspar G2 builder from back in the 1950’s and was good friends with “Kenny” and Dorothy Brooks from 1953 to around 1956.  John is a sprightly 90 years old this year and it can be hard to get ahold of him.  Why…you might ask?  Well John and his wife Marie still travel, still vacation, and in every way stay busier than most of my friends.  He’s always a pleasure to talk to and impressively uses the computer like a master and e-mails like a pro.  John Knebel is one special guy, and has always been kind in helping with questions about Glasspar and sharing his memories (thanks John!).  We discussed John’s Glasspar G2 in an earlier story on our website (click here for that story).

John remembered that “Kenny” was about 50 years old in the early 1950’s – when his Brooks Boxer was built.  Hot rods may have appealed to kids and young adults, but sports cars appealed to all ages – and Ken Brooks was looking to create one hot sports car.  Bill Tritt called the car Kenny was trying to build a “hot rod” but in reality what Ken and Dorothy wanted was a stylish fast sports car to drive. 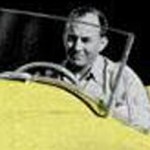 The June 1952 issue of Popular Mechanics reports Ken Brooks and his wife living on Lido Island in the Newport Beach area of California.  Matt Tritt and John Knebel confirmed this as well (personal conversation, 2010).  Knebel also remembers that after leaving Lido Island, Kenny Brooks and his wife bought an Avocado farm in Southern California in the mid to late 1950’s.  After that, we don’t know what happened to them.

There are pictures of Ken Brooks and his car in Popular Mechanics June 1952, and Popular Science March 1952, and I’ve attached some close-ups of Ken in this article too.

We don’t know if Ken and Dorothy had children.   That’s one of the issues Rick and I are continuing to research and with luck will find them – and perhaps a stash of pictures of the car.  And maybe the Brooks Boxer too.  You never can tell…

Ken Brooks – The Challenge of Building a Sports Car

In 2007, Bill Tritt discussed the Brooks Boxer in the following way:

“Ken Brooks was building a hot rod – something to go fast in and have fun.  The first time I went for a ride in it – it was too exciting for me.  It was a fast car, and had no floor – or body yet.  I just saw the ground rushing by.”Bill went on….”Ken was a wonderful mechanic but didn’t have an eye for design and the chassis and drivetrain was from the hot rod he was building. Ken was going to have the body built out of aluminum which was going to be expensive.  I was  already building fiberglass boats, and convinced him that fiberglass would be durable – and much more cost effective – for a car body.” 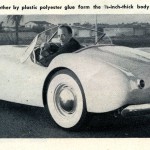 Matt Tritt remembers going with his father to Lido Island and seeing the chassis for the first time, as follows…

”I was 8 years old and I went with my dad when he visited Ken Brooks on one of his very first meetings.  The chassis was in the garage, and was intact – with engine, drivetrain, and suspension.  This was the first time I had seen a car without a body and I was absolutely fascinated with it as a kid.  That’s part of the reason I remember it up thru today.”

What Year Did Ken Brooks Start on the Chassis:

From interviews and articles, Ken Brooks started working on creating his sports car in 1949 or 1950 – before Bill Tritt got involved.  Here’s our research on the initial build year (when it was started) based on interviews with Bill Tritt and articles from that period: 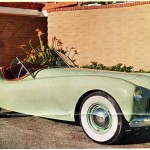 So Ken was going to build his own sports car.  This was the normal course of action for anyone who wanted an American Sports Car in 1950.  If you couldn’t buy an American sports car like a Kurtis (and there were no others..) you built one yourself.  Creating a body for your car was the next logical step.

During our interviews with Bill Tritt, he remembered the following…

“Ken was a marvelous guy.  The name “Boxer” came from his wife.  She loved Boxer dogs and wanted to call it by this name – even if they drool.”

In a November 1952 issue of Modern Man, author Joseph H. Wherry discussed the Glasspar G2 and its heritage.  He also reported that the car was named “Boxer” by its owners: “Ken and Dolly Brooks”.

That gets us to how the project was started and a bit about Air Force Major Ken Brooks.  In the next article I’ll tackle the story of the chassis and drivetrain, and share reasons why it was a logical and excellent choice for the time.

More to come on the sleuthing gang, and hope you enjoy.  For now…a tip of the fiberglass hat to Air Force Major Ken Brooks and his wife Dolly for their involvement and commission of America’s first fiberglass sports car. 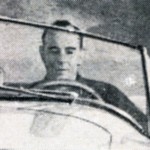 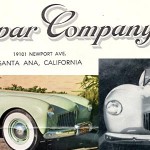