This car has fascinated me since being turned on to it many years ago by Guy Dirken.  It’s a small sports car with a wheelbase of less than 90 inches, but the styling of it is superb and the story about its inception and how it was built keeps getting better and better.  Not only was more than one built but a GT coupe was planned – as you’ll soon discover in this article.

I had been on the track of finding the families that built the Bohada ever since Tony St. Clair posted a photo of the car in our Forgotten Fiberglass Forums.  At the time, it didn’t click which one it was to me – but it did for Erich Schultz.  Erich nailed the “match” instantly, and our research began into finding the families.

But sometimes they find us, and that’s what happened when H.M. Steiger – son of Hank Steiger who was one of the original builder’s of the Bohada – contacted me after finding previous stories we had posted on his father’s car (click here to review earlier stories on the Bohada Sports Car.)

H.M., as he is called, shared with me several newspaper articles and a magazine article about his father’s car and the team of people who built it.  Each participated equally in the build and what a great project and achievement it was for the mid 1960s.

Thanks to H.M. Steiger, we’ll feature all of these articles here at Forgotten Fiberglass.  For today, let’s start with one of the best – an article that appeared in the Foreign Car Guide Magazine, March, 1965. 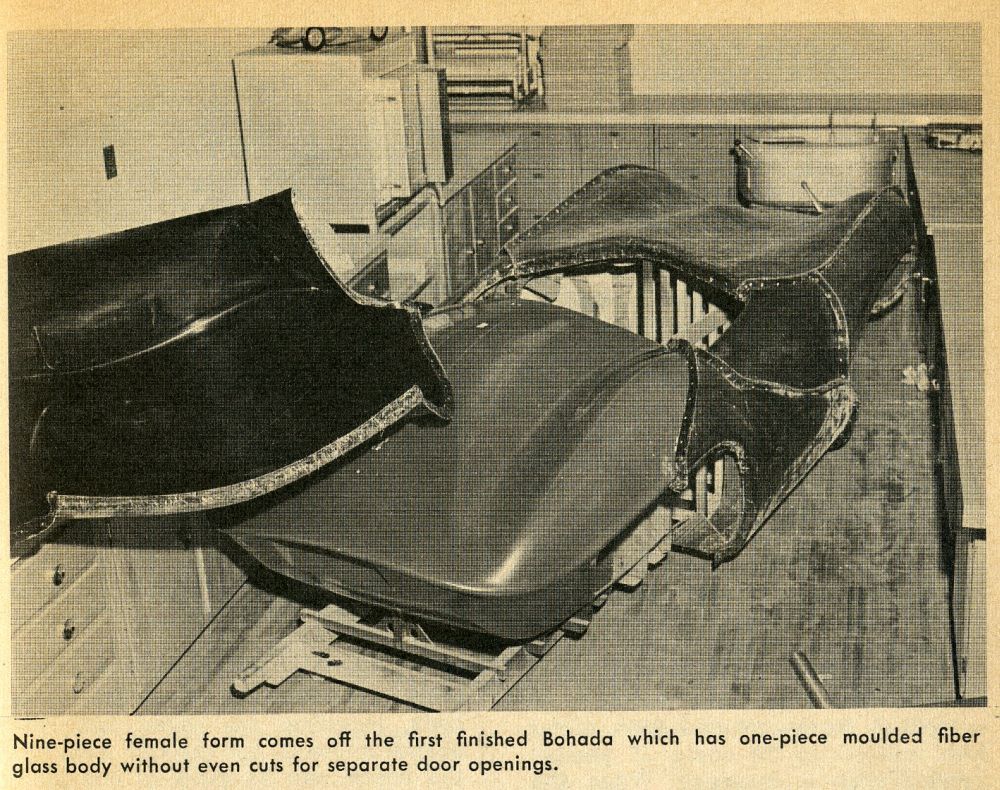 Recently, the citizens in the Buffalo area have been set agog by the appearance of an exceptionally attractive sports car called “Bohada”.  Actually, the name Bohada should be applied only to the body as other components may vary from car to car.

It derives from the first two leters of the nick names of three Industrial Arts teachers in that area: Bob Jones, Hank Steiger and Dave Timm, co-builders. The idea of the Bohada had its inception several years ago when Bob Jones was driving a Jag. 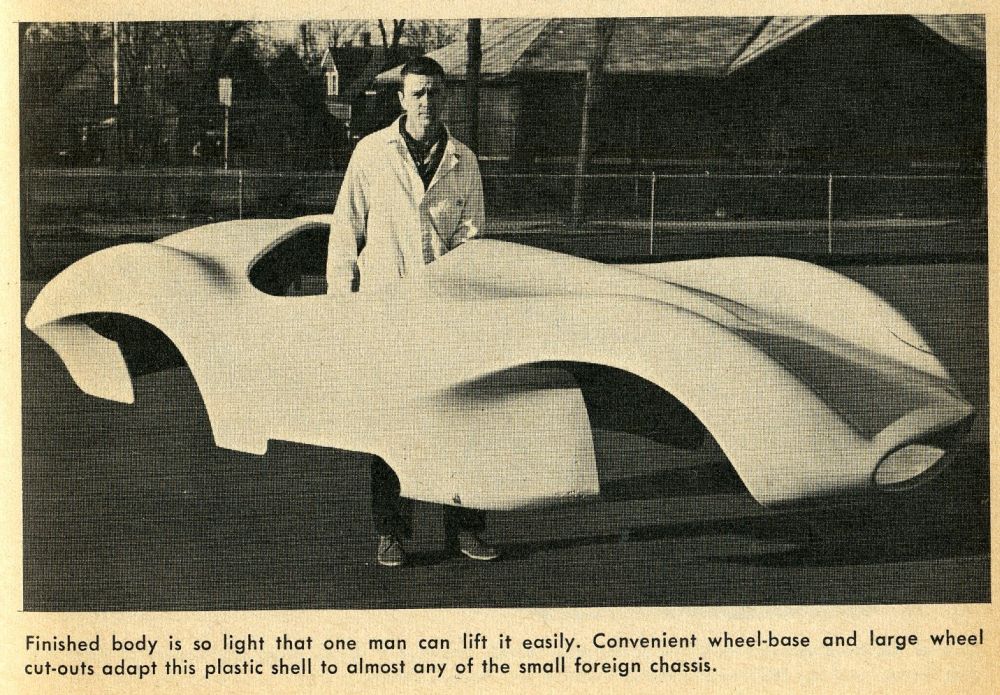 He felt the Jag was unnecessarily big and powerful and he began thinking of a design for a smaller, more agile car which would accommodate engines and suspension components from any one of a number of small cars.  Bob soon had his ideas down on paper in the form of a set of plans.

The chassis for the first Bohada was built jointly by all three men as a welding workshop project while they were attending summer school.  This chassis is based on a tubular space frame designed to accept the running gear and engine from an Austin A40.

The mildly souped Austin engine is located so far back in the frame that it is nearly in the midship position.  Viewed from the side, the front of the engine is several inches behind the rear edge of the front tire.  Two Harley Davidson carburetors, a milled head, oversize pistons and equal length exhaust header pipes dumping into a hand-made straight through muffler, all help boost the engine performance to a level more appropriate for this type of car. 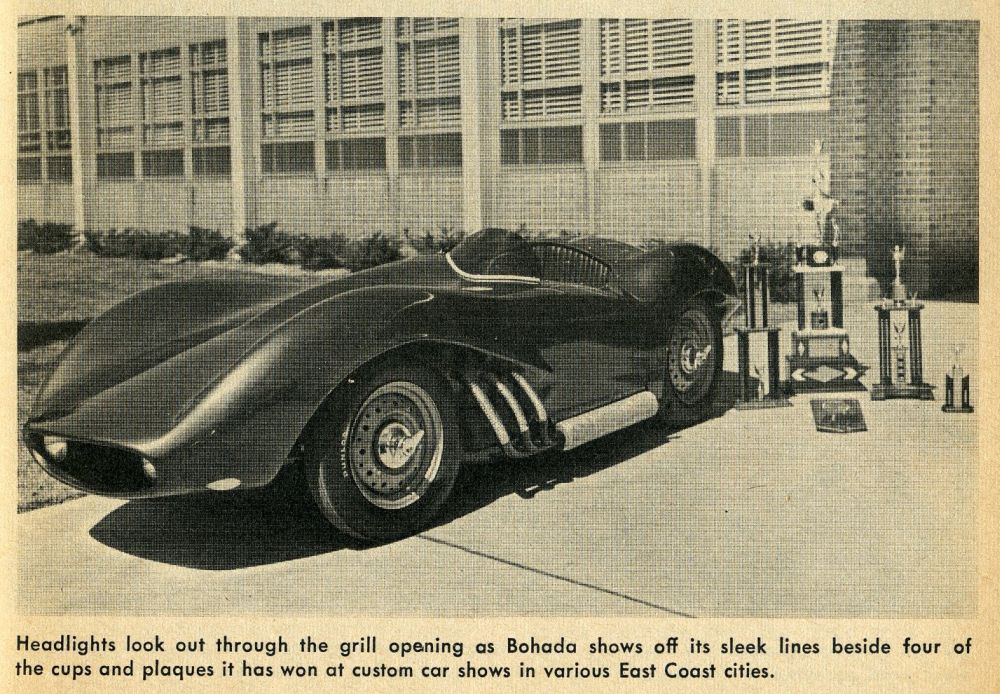 The radiator is slanted backwards so as not to interfere with the low hood line and hot air from the engine compartment is ducted back to exit in front of the rear wheels.  Dave and Bob made a small clay model in order to determine the body styling.

After finalizing the shape on this model, they made up a larger model (one quarter size) of wood and clay using the small one as a pattern.  From this they made a set of full size templates.  These were turned over to Hank.  Hank proceeded to build a full size male mold.  This mold consists of a wooden frame covered with metal lathe and 60 to 70 coats of plaster applied with a squeegee.

When the plaster was shaped and smoothed to his satisfaction, he built an eleven piece female mold for the fiberglass body.  The lines which divide these sections are located so that the entire body, including the rolled tail, rear license plate binnacle, the cockpit rolls and the beads, can be made in one piece for greater strength and better appearance as it allows an absolutely unbroken line. 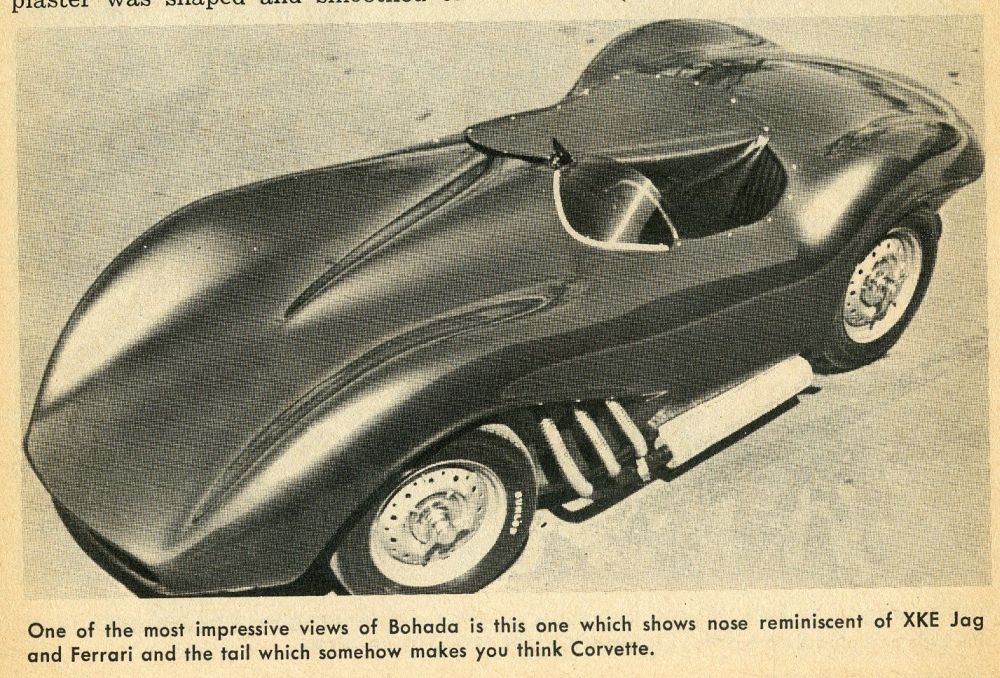 The first Bohada has no doors and obviously is not for the crippled or the halt, but doors can be cut if desired or if required by rules for racing.  Half-inch tubing is laid in the inside of the body for additional strength and rigidity.  Several of these bodies have already been made up – some by the usual method of pasting in the fiberglass mat, and some by spraying, using equipment designed for building fiberglass tanks.

The body shell weighs approximately 72 pounds.  In keeping with the idea of maximum versatility, the body can be raised or lowered over the frame as there is plenty of room over the wheels.  The first Bohada had maximum height of 29 inches.  It is attached to the frame with quick release fiberglass hangers and wing nuts which permit the entire body to be removed in about 15 minutes for major work.

This should seldom be necessary, however.  An engine access door which also serves as a glove compartment permits such service as adding oil, changing plugs, points, etc.  Additional engine maintenance can be performed by removing either front wheel. 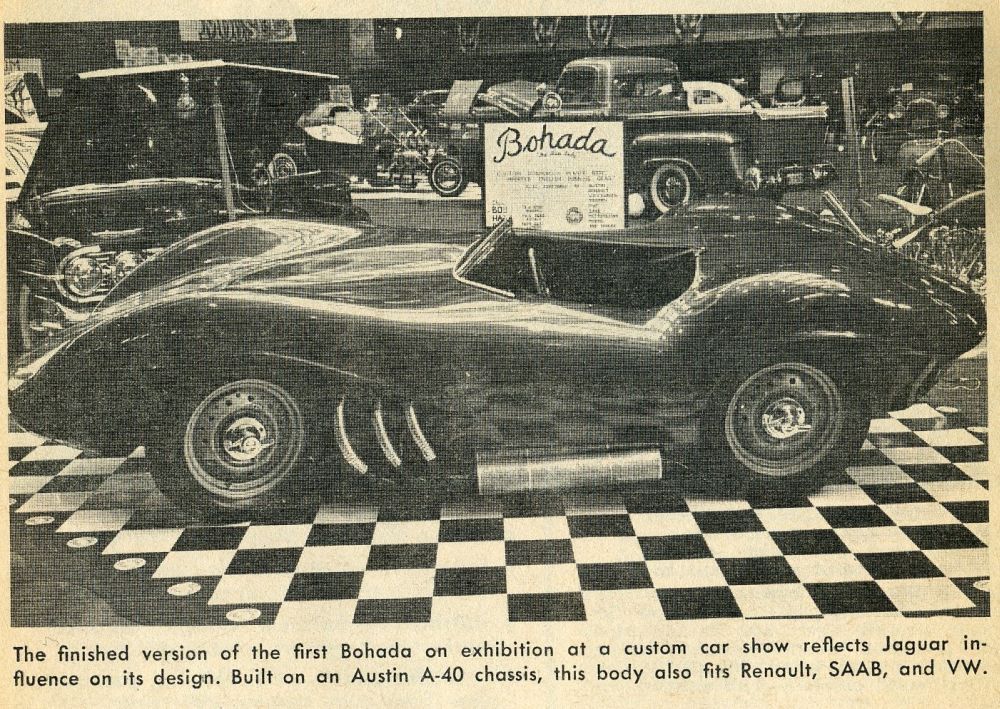 As soon as the first Bohada was ready for the road, work began on another which has an entirely different chassis built around Volvo components and powered by a Volvo engine.  Based on a comparatively simple frame fabricated from 2 and ½ inch tubing, it employs a shortened Volvo front cross member with its suspension components and a shortened Volvo rear axle.  As in the first Bohada, the engine is located well back in the chassis for approximately 50-50 weight distribution.

Bob and Dave have started work on another chassis designed to go with a GT coupe model of the Bohada.  This chassis embodies a particularly interesting engineering innovation.  Taking the place of the tubing frame normally used with this type of body will be a stressed plywood structure covered with fiberglass. 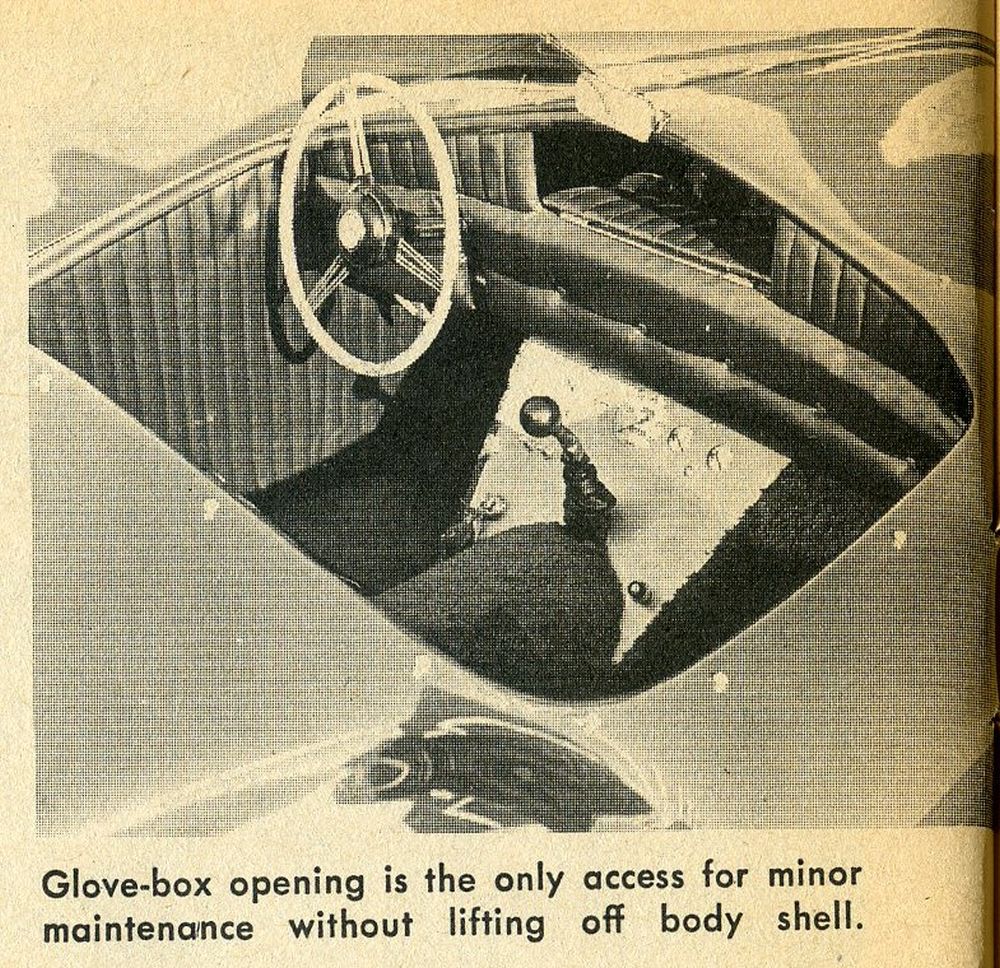 Power will be supplied by a Renault Dauphine engine mounted in the rear and the suspension components are from the same Dauphine. The type of construction should provide the answer for those who live where salt is used on the roads in the winter for, with a wood fiberglass chassis and a fiberglass body, there is little steel to rust out.

Other advantages would seem to be vibration and sound damping and light weight.  Bod, Hank and Dave plan to market the Bohada bodies, both in roadster and GT form and the price is reasonable.  This should be the answer for Sports Car builders who prefer not to make their own bodies. 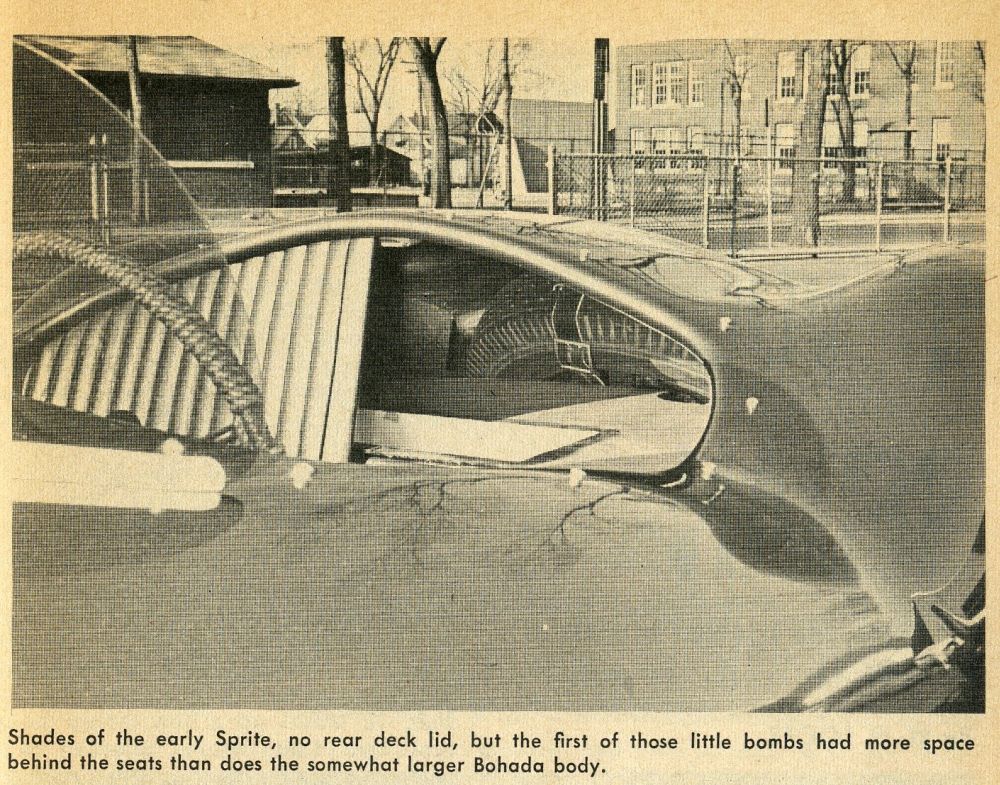 Thanks again to H.M. Steiger for sharing with us the article for today’s story.  And…wait until you see what more we have to share from his collection about the Bohada.  Some definite surprises await you in the future here at Forgotten Fiberglass. 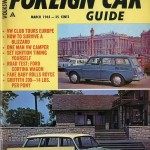 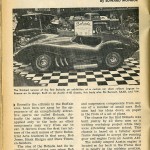 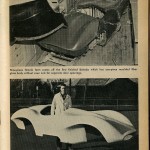 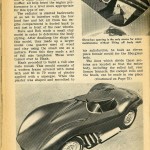 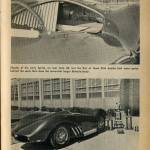 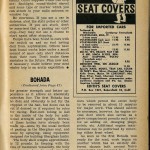 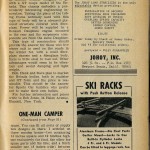 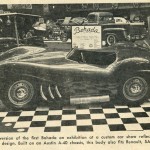 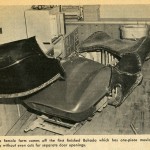 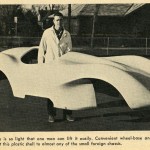 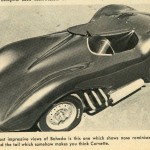 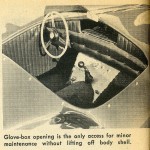 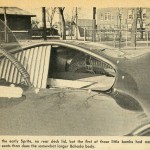 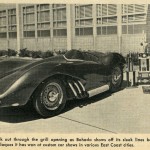