Amelia Island Concours d’ Elegance is right around the corner – less than 3 months away.  Barely enough time to get ready, for some of us – including me.  As a reminder of the event next year featuring a “Forgotten Fiberglass” class of cars, here’s the website for your review:www.ameliaconcours.org

We will have many wonderful cars at the Concours and one of the cars that will shine there will be Phil Fleming’s Devin.  I recently asked Phil to tell me a bit more about his Devin.  His review appears below.  Thanks to Phil for taking the time to do this for us and hope to see you at Amelia…

This 1958 Devin Special was originally constructed by an unknown independent enthusiast.  Using a Devin Fiberglass body, he combined attractive styling with the superior handling of European suspension, and the significant horsepower of an American V-8.  The current owner, Phil Fleming of Flemington, New Jersey, purchased the car in March, 1995 and faithfully restored it to its original condition in 2001. Its VIN number is DH12F425S.Bill Devin began building this style of lightweight fiberglass bodies in 1957 at a new production facility in Lancaster, California.

The design of the body emulates a 1952 Ermini designed by Scaglietti. This car body was ultimately offered in 27 sizes for cars with various wheelbase and track combinations. The overall length of this car is 13’ 7”.  A headrest … offered by Bill Devin as an accessory … is included on this car.  It may be a WWI fighter plane design element, where support for a pilot’s head was essential … European race cars of the period (notably Ferrari) had headrests in the late 1950’s before they fell out of vogue. 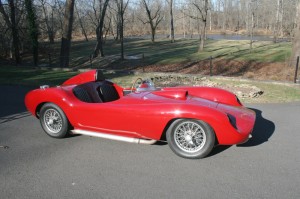 This Devin Special is built on a 1954 Austin-Healey chassis, serial #BN1C155904.  At the time, the BN-1 chassis was known for being lightweight, yet strong … as it is of an “X” design and is “boxed” for extra strength.   This car has standard Austin-Healey suspension, knock off wire wheels and drum brakes.  Tire size is 5.90 x 15.

The front suspension is independent, with coil springs and lever dampers. The rear suspension is a live axle, with half elliptic springs (modified with Traction Masters to eliminate “wheel hop”) and lever shock absorbers.  The wheelbase of the car is 90” with front track of 49” and rear of 50 and 3/4”.  The stock rear axle has a ratio of 4.125:1.

People doing “engine swaps” at the time discovered … much to their surprise …that the Austin-Healey 162 cu. In. 90 hp (@ 4,000 rpm) 4 cylinder engine and transmission weighed only 23 pounds less than a 283 cu in. Corvette V-8 and a Borg-Warner T-10 synchromesh 4 speed close ratio transmission.  The Small Block Chevy (“SBC”),” as it has come to be known, can easily be modified, as is the case with this engine, to generate 300+ hp @ 7,000 rpm.  In this case, the engine was bored .020, resulting in 301 cu. in. displacement. The car has fuel injection cylinder heads with 11:1 compression ratio.

A high lift Duntov camshaft and solid lifters ensure efficiency at high rpm. Ignition is provided by a correct Mallory MagSpark Dual Point distributor. This Devin Special features the only known “3×2” intake manifold with Bill Devin’s logo (he produced several variations of an intake manifold for the SBC), with 3 Rochester carburetors. As a result, a massive improvement in the car’s power to weight (est. 1800 lbs.) ratio results with the infusion of +235% more horsepower.

This combination of European running gear and “Detroit” horsepower exemplifies 1950’s sport racer design and construction in America. The Cadillac Allard … with a 331 cu. in. American V-8 in a British car … is another example of this approach.  Carroll Shelby followed suit in the mid-60’s with his famous Ford powered AC Cobras. Bill Devin offered other items for sale, in addition to car bodies and intake manifolds.  This car features Devin valve covers, gauges and gas cap (possibly sourced from Aston-Martin). 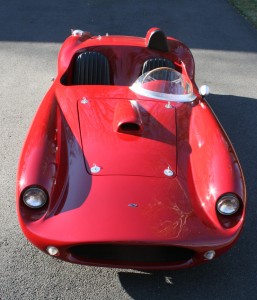 Independent constructors were innovative.  They had to be, in order to meld a large number of disparate parts together to result in an effective, competitive car. For example, in order to fit under the hood, this car has a generator that has been wound backwards so that when run backwards, it generates electricity as a normal generator would.  Such innovations reflect American sports racers’ creativity and ingenuity of the period. 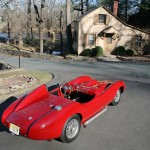 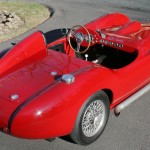 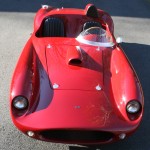 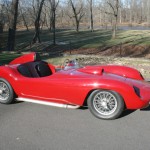 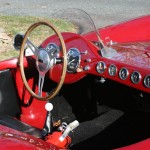 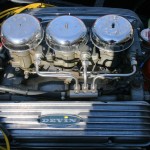 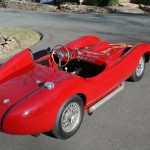