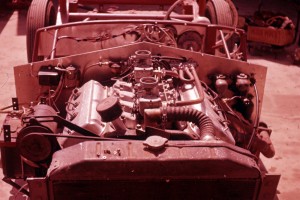 Here’s your “Forgotten Fiberglass” question for the day:

How many people who built a Victress Sports Car are still with us today?  And of those, how many of their original cars might exist?

Let me count the ways (or people….in this case).

The Victress that Dick Built:

This was the first car – and only car – that Dick ever built.

He was inspired by sports car racing, and wanted to build a sports car, like many young men of his time.  Dick was born in 1931, and in ’53 he was 22 years old and off at college studying electrical engineering at El Camino Junior College in Gardena, California.  Many of the folks who built cars back then were in “engineering” in one area or another, and it’s not surprising that he wanted to get his hands busy building a sports car.  But what one would he build and what would it look like?  Time would tell, and he began his project in the summer of ’53.

For the first 8 months, Dick worked on a mold for a custom body based on Ferrari design.  He never could get the buck smooth enough to take a mold off of it, and after 8-12 months….he gave up.  He decided, instead, to go with a Victress S1A roadster body.  He went to the Victress Manufacturing factory in North Hollywood, California, and picked up his body personally.  Then, he moved to the next step – building a chassis. 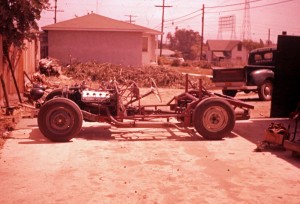 Dick was first in his group of friends to build a sports car special, though he had a buddy, Ron Pellet, who bought a used glass bodied car on, Dick believes, a Triumph chassis.  He spent time gaining experience at Chuck Meyers machine shop (North Redondo Beach, California), watching them build an MG racecar from scratch – and other projects they were doing and building too.

He also watched a Porsche race car being built at a machine shop at Hermosa Beach, California.  It was now 1954, and when he started building his Victress, he began working on it at his home in North Redondo Beach, California.

The car evolved.  He first started by shortening a mid ‘40s Ford chassis with a transverse leaf spring front end – the rear end was originally a ’50 Ford.  He didn’t like the setup, so he made changes.  He moved to an independent front suspension and strengthened the center of the chassis by eliminating the original framework altogether.  Instead, he went with a round tube chassis for the center portion of the car with double-trusses.  This worked much better.

Dick spent three years working on the car.  He was nearly finished with junior college in 1956 when he finished the first iteration of his Victress Special, and that’s what we’re viewing in this story – many of the original pictures he took resulted in the Victress on the modified frame discussed above.

Dick chose a real meaty drivetrain for his Victress – a Dodge Red Ram Hemi 270 with ’49-’50 Mercury 3 speed with overdrive.  This car weighed just over 2000 pounds, and what a powerful motor that must have been.  Dick remembers:

“It had a ¾ cam, slightly higher pistons, and, at one time four Stromberg 97 carburetors.  It would go fairly good as long as second gear would stay in one piece.” 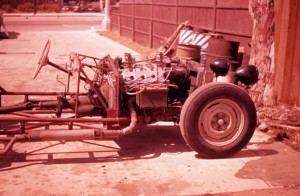 Dick also remembered using Lincoln rear brakes and drilling “lightening holes” into the backing plates of the front brakes – which are still there today.

Leading up to the completion of his car in ’56, Dick made many modifications to the Victress body.  His original body didn’t have doors cut into it, so he cut them himself and hinged them on the downward side of the door.

This was an interesting idea, but didn’t last long, and Dick fiberglassed the doors back into the body.  Another feature looked great and that was the side vents he cut into the fenders just forward of each door.  These were nicely done and attractively sized and completed.  However, these were later fiberglassed in, as well.

But the most interesting feature of his Victress was the clamshell front end he built – the only known Victress from the era where the entire front of the car tilted forward like a Jaguar XKE.  Pretty neat feature.  This gives ready access to the drivetrain and mechanicals – especially during a race – if needed.

But Dick wanted more, and like many young men at the time, his plans evolved as he raised the standards to which he wanted to build his car.   By 1958, he was working at Northrop Aviation and attending engineering classes at California State University, in Los Angeles, California.  It was then that he went back to the drawing board, and drew up chassis plans based on the Kurtis 500 KK chassis.  And we still have his original plans from 1958, and these are shown below. 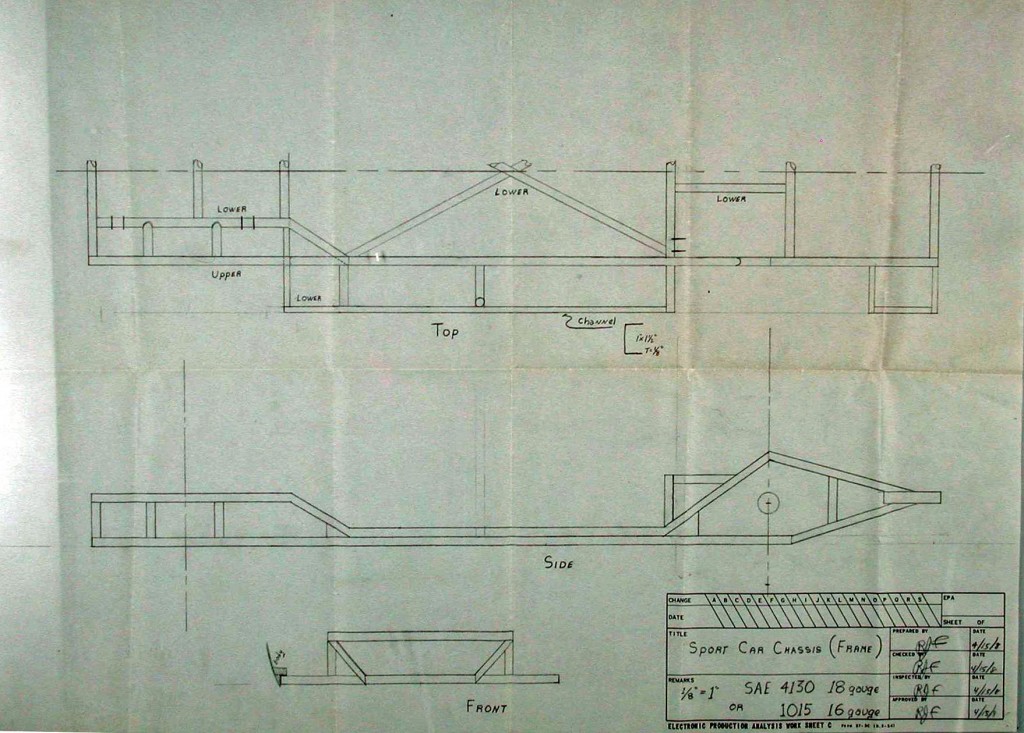 The chassis was a clean, strong, and intelligent design for a performance sports car, and Dick got to work converting the entire chassis to tube frame construction – which it still is today.  He drove it to races such as Torrey Pines and Riverside in California but never raced the car.   Dick kept the car thru the mid 1970’s, and later retired from a career as an aerospace engineer to the beautiful countryside of Mariposa, California.

What’s also remarkable about this car is the fact that the original title still exists from 1956 – and the envelope it came in.  We often wonder how cars were titled back then, and he’s one great example.  This car was titled as a “Special Construction Dodge” showing Dick Foster’s heritage of using the Dodge Red Ram Hemi as his drivetrain.  Since the chassis was purely custom (tube frame) this makes even more sense and ties closely to the concept that a fully-built fiberglass sports car from the ’50s was a true ground up build.

Remember…back in the ’50s a handcrafted fiberglass sports car took approximately 2000 hours to complete (as reported in vintage magazines of the day.)  In modern dollars at $50 an hour, the labor cost to build one would exceed $100,000 before the first part was purchased.  Cars like the “Dick Foster Victress Special” represent in build and title – the craft of coachbuilding an American Sports Car in every way. 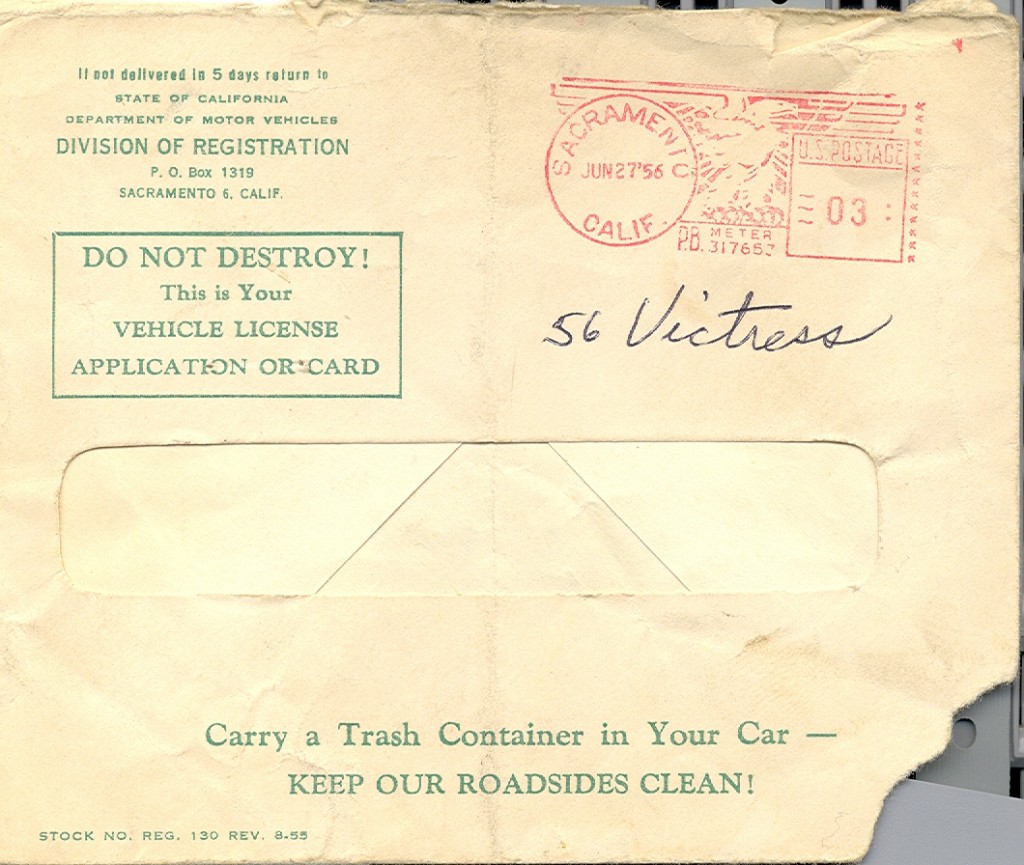 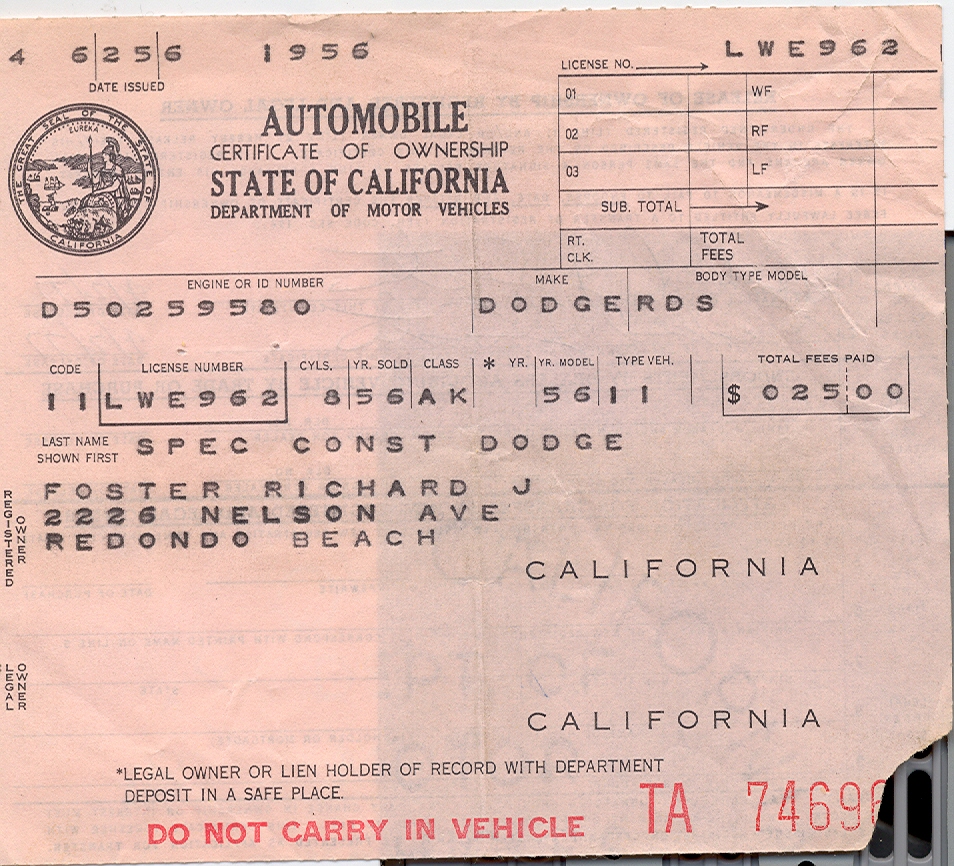 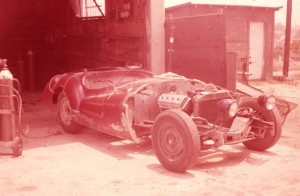 “I built it initially in 1954-1956, and did lots of additional mucking around up until about 1960.  In between I drove it to work and occasional trips to here and there.  I was still driving it into the mid ‘60s, but it had a rod bearing going out and I parked it.

I did the tilt front end, the head rest (now missing from car), the square shaped scoop, and shortened rear end.  The original two panel windscreen was made using Victress components (their castings) of aluminum which I had welded together and glass cut to fit.  It consisted of 5 pieces, three vertical and two channels across the top – just a piece of rubber molding across the bottom.

Except for the big rear wheels, your pictures show it pretty much as I left it.”

The original engine was seized when the previous owner purchased it about 25 years ago.  They located a suitable replacement and found a drivetrain that was fast and reliable – an Olds 350 with a 3 speed turbo automatic transmission.  Today the Dick Foster Victress is lightning fast and easy to handle.

The shortened rear end (body behind the rear wheels) that Dick Foster built is an interesting feature.  When I discussed that with Merrill Powell, co-owner of Victress from ’53 to ’61, he shared with me a memory.  Merrill recalled that they (Victress Manufacturing) had considered shortening the long-tail of the Victress S1A around 1955.  They wanted to bring the body size down a bit to a more suitable size for racing, but never acted on this thought. 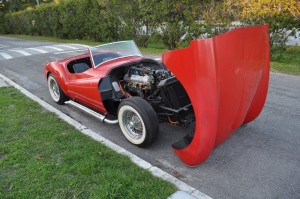 So the Dick Foster Victress represents what that shortened Victress S1A Roadster body would have looked like had Victress Manufacturing ever gone thru with their intention.  A neat occurrence here gang.

Thoughts on the Chassis:

Although Dick never raced the car, it seemed like it was built to do just that.  Lightweight hemi, tube frame patterned after the ’55 Kurtis 500 KK chassis (double truss), independent front suspension, lack of doors forcing quick entry/exit, clamshell front giving quick and ready access to suspension and engine up front, everything adds up to a very nicely designed sport/race car.

I asked good friend Erich Schultz for his thoughts on the frame Dick Foster designed and built.  After viewing some pictures of the car, here’s what he had to share with me:

“I would describe this chassis as a round tube deep truss type that is fully braced and triangulated.  It has a custom made independent double A-arm with king pin front suspension with what looks like Pontiac or other American A-arms welded to a plate that supports the king pin.

The engine is mounted well behind the front axle center line for excellent weight distribution and handling.  The chassis represents the “state of the art” of chassis design for its time.  This type of chassis design became most popular in the late fifties, so it would have been quite advanced for its time.”

Over the years, there have been other changes to the Victress as well such as an updated dashboard, but as Dick mentioned above, the body and suspension – the major components of the car – are nearly identical to how he left it back in the ‘70s when it was sold. 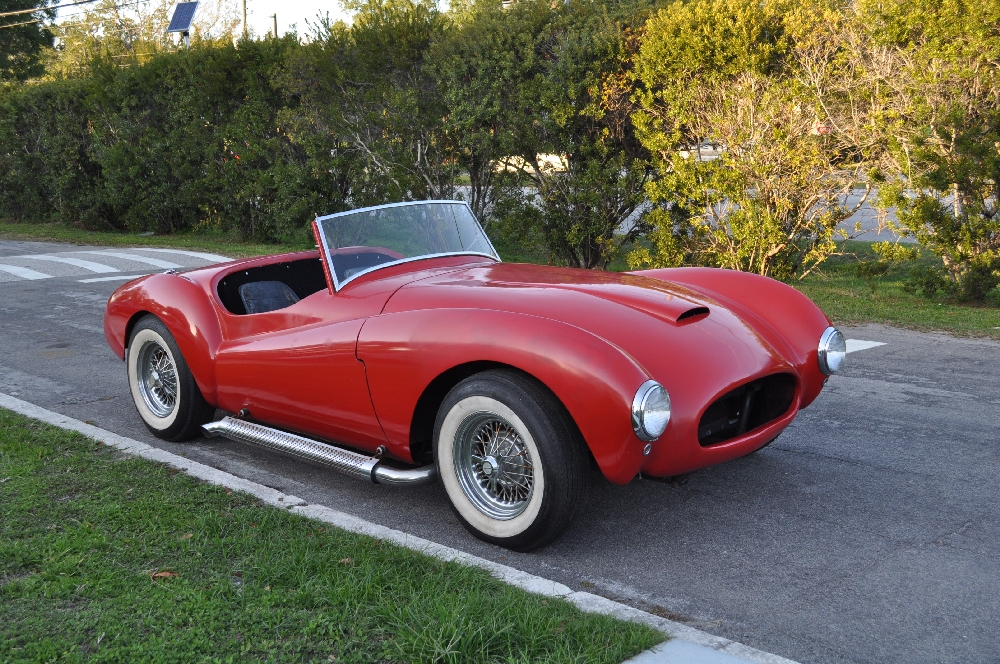 Just 20 Victress S1 and S1A roadsters have survived which makes this car rare – even among Victress sports cars – given its owner/builder/survivor history.

This concludes part 1 of the Dick Foster Victress story.  In the second part of the story, I’ll discuss how we got the car back from Canada and the cross-country adventure we went on with the car back in the Summer of ’08. 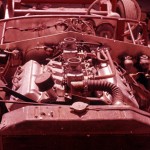 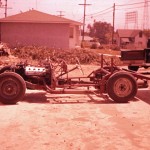 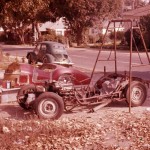 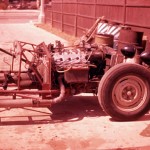 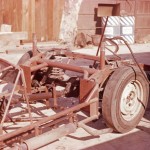 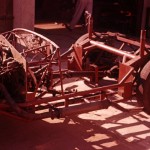 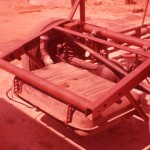 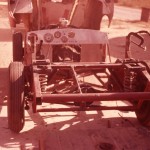 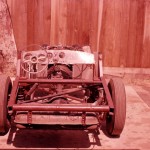 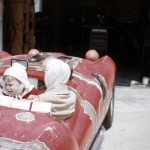 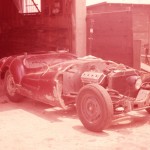 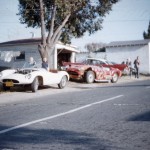 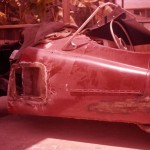 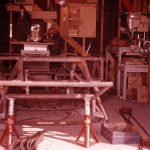 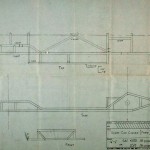 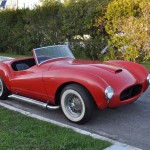 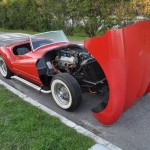 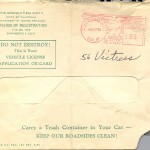 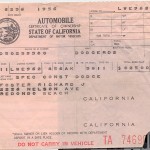 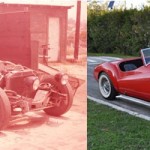