Another fiberglass sports car on the front cover of a major automotive magazine from the ‘50s.  How impressive is that gang!

Howard “Dutch” Darrin still had it, and the world would always focus when he had something to say or a new design to rollout.  This is another Darrin design for a fiberglass sports car  – uniquely his own – fresh and creative in every way.

Let’s have a look at what Motor Life had to say about the rollout of this car – a car that had debuted at a Los Angeles Automobile Show in December, 1956. 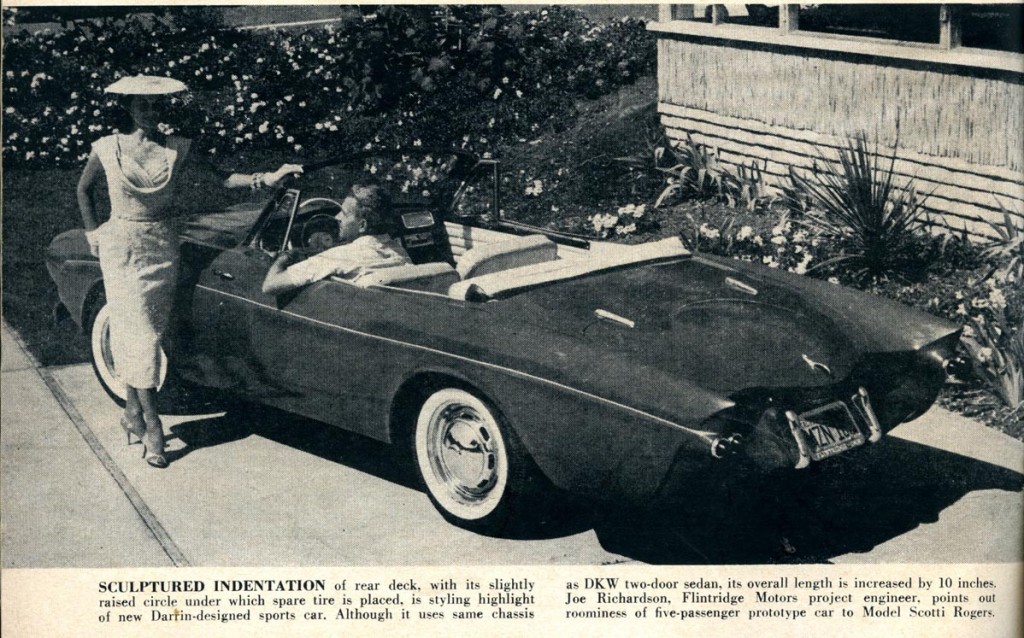 A New Darrin Design For Production

Inside Cover Note:  The new Darrin car (on cover) is the first color cover ever shot by veteran freelancer Jim Potter, who did the complete story.  Background (of picture) here is the plush Jamaica Inn at Costa Mesa, California.

Since the success of the Corvette and the Thunderbird, there have been literally scores of small organizations attempting to enter the market with similar machinery.  It’s been a rough field to crack, however, and most of these ambitious outfits have fallen by the wayside.  The question:  why is it that a small-scale automobile manufacturing project always seems doomed to failure?

The universal answer, obtained by talking personally to a good number of these operators, is the “high cost of manufacture.”  Their procedure by economic necessity, was the use of an automobile design that called for detail parts and assemblies that were available either from dealer’s stocks, parts houses, or, in some cases, from used vehicles. 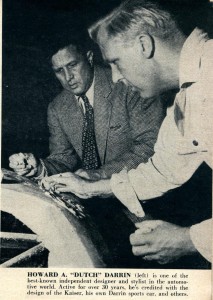 Availability of suitable chassis from American factories for a truly small car has been zero, so it has been necessary for these small firms to either design a chassis of their own, or take an existing Detroit chassis and cut it down to the desired size.  A better method would be to use a chassis of one of the small foreign cars, but availability of the latter is also limited in this country.

One small-production sports car that had interesting possibilities was the Kaiser-Darrin.  The low sportster was designed by Howard A. “Dutch” Darrin, well-known in the automotive world for over 30 years as one of the world’s top coachbuilders.  The Kaiser-Darrin probably would still be in production today had it not been for the death of the Kaiser car itself, which was the basis for most of the running gear and chassis of the sports car.

Darrin, who has never been known to sit back for long from the automotive scene, was approached in the spring of 1956 by two foreign car parts suppliers, Robert Heidreich and Milo Reckow, who saw a challenge in Auto Union’s DKW, a German car with unusual engineering features but conservatively styled.

At the outset, Darrin told Heidreich and Reckow that to transform the DKW into a sports car by building a new body would “cost more than it’s worth.”  He further pointed out problems that he had had with the production of his Kaiser-Darrin.

Thinking that he had thoroughly discouraged them from any further consideration of their project, Darrin was impressed with their determination when they returned the next day with an offer of $1500 if Darrin would only “study” the possibilities and come up with a clay model of a new DKW-based boulevard sports car.

Darrin, not one to turn down anything that had even remote possibilities, especially when such a project showed signs of financial support, immediately began work on a one-fourth scale clay model.  With the assistance of Bob Darrin, his son who has taken a liking for things automotive, Dutch came up with a new body design which utilized the old body’s basic dimensions, for the most part.

Clients Heidreich and Reckow were pleased with Darrin’s efforts and immediately put up $10,000 with which to build a full-scale prototype car.  It was at this point that Peter Satori, the West Coast distributor for DKW, was approached for a DKW chassis and assistance in the project. 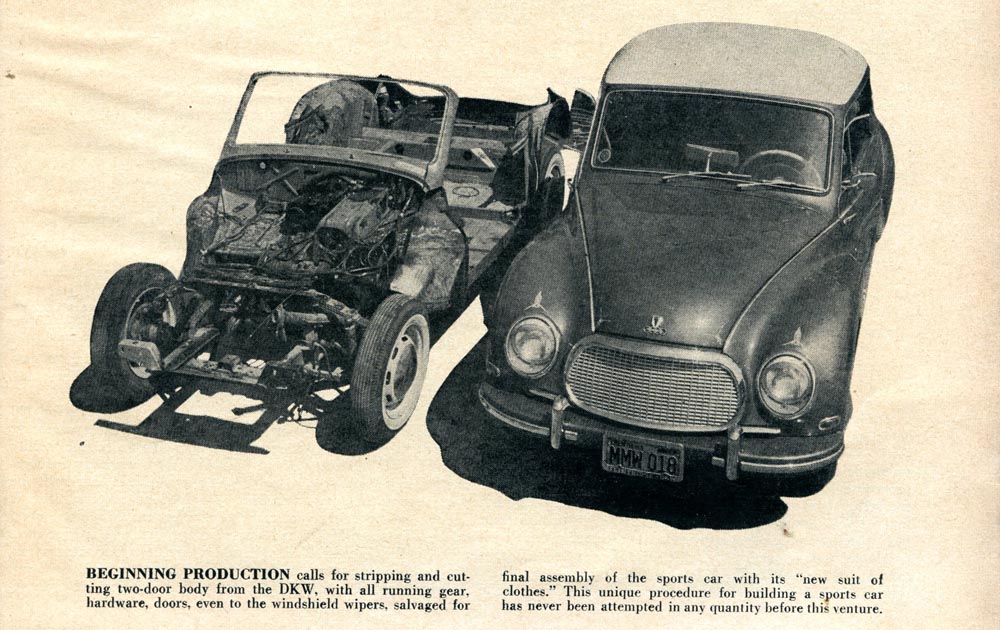 Satori referred Darrin to Flintridge Motors of Montrose, Calif., who under the direction of owner Henri Lindsey and son Keith were busy building a “Caravan” vacation-type body for the DKW chassis.  The Lindseys became interested in the sports car project and provided a completely assembled DKW two-door passenger sedan, since no bare frame chassis of the DKW was available at that time in the U.S.

Darrin proceeded to cut the old body away from the chassis.  In stripping down the body, however, all parts were salvaged for later use in the sports car, including instruments, lights, wiring, doors, etc., and wherever possible, only the skin was removed, leaving the inner body shell intact.

Onto this inner shell, the clay mockup was shaped and sculptured in accordance with the one-fourth scale model previously designed.  From an esthetic standpoint, the low, streamlined prototype that resulted from this unique procedure had a far wider appeal than the rather boxy appearance of the original DKW.  Although using the same 92-inch wheelbase of the two-door sedan, the sports car was longer by 10 inches, or a total of 180 inches overall. 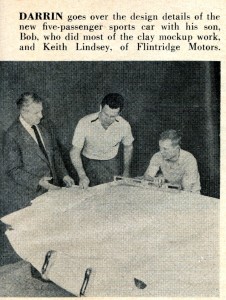 Width was the same 67 inches, but the height at the top of the windshield was lower by 5 1/2 inches, to 52 inches.  This was accomplished by moving the windshield back six inches and down four inches, giving it a slightly greater rake to improve and streamline the appearance.

With the completion of the prototype early in December of 1956, it was shown at the Los Angeles Motor Car Dealers Auto Show, held at the Pan Pacific Auditorium, to obtain public reaction to the Darrin design.  According to Henri Lindsey, president of Flintridge Motors, “Retail sales of the new Flintridge DKW Darrin Mark II sports car were made as early as three hours after its unveiling at the auto show.”

The outstanding feature of the new sports car is its five- to six-passenger capacity, unique in sports car models, which makes it practical for use as a family car.  The new car, although 4 1/2 inches lower than the standard F93 DKW two-door sedan, retains full headroom.

After its initial appearance at the auto show in December 1956, the necessary tooling was developed by Flintridge Motors and subsequently by the Woodill Fiber Glass Body Corporation of Santa Ana, Calif.  While the sports car was to have inner steel construction, the “skin” was to be made out of fiberglass.

Herein lies the secret that is solving the production problems of a comparatively small-scale automobile manufacturing operation.  Instead of literally hundreds of small parts (992 in the case of the DKW) to contend with, only eight major reinforced plastic parts are required to do the conversion, since all of the wiring, hardware, windshield wipers, instruments, and even the doors and door latches are retained.

As far as is known, no organization or individual has attempted to produce automobiles by this simple method of “skinning” the vehicle and providing “a new suit of clothes” as described here; it’s a revolutionary idea and it works!  Current production plans call for 300 per month, with a production assembly line being set up at the Santa Ana facility of the Woodill Fiber Glass Body Corporation.

Distribution of the car will be handled by Flintridge Motors, through already established DKW distributors and dealers here in the United States.  The standard five-passenger sports car, with a fixed hardtop, reportedly will sell for $2995, while the deluxe job with removable hardtop, radio, heater, and white side wall tires, is expected to retail for $3295, at the factory. 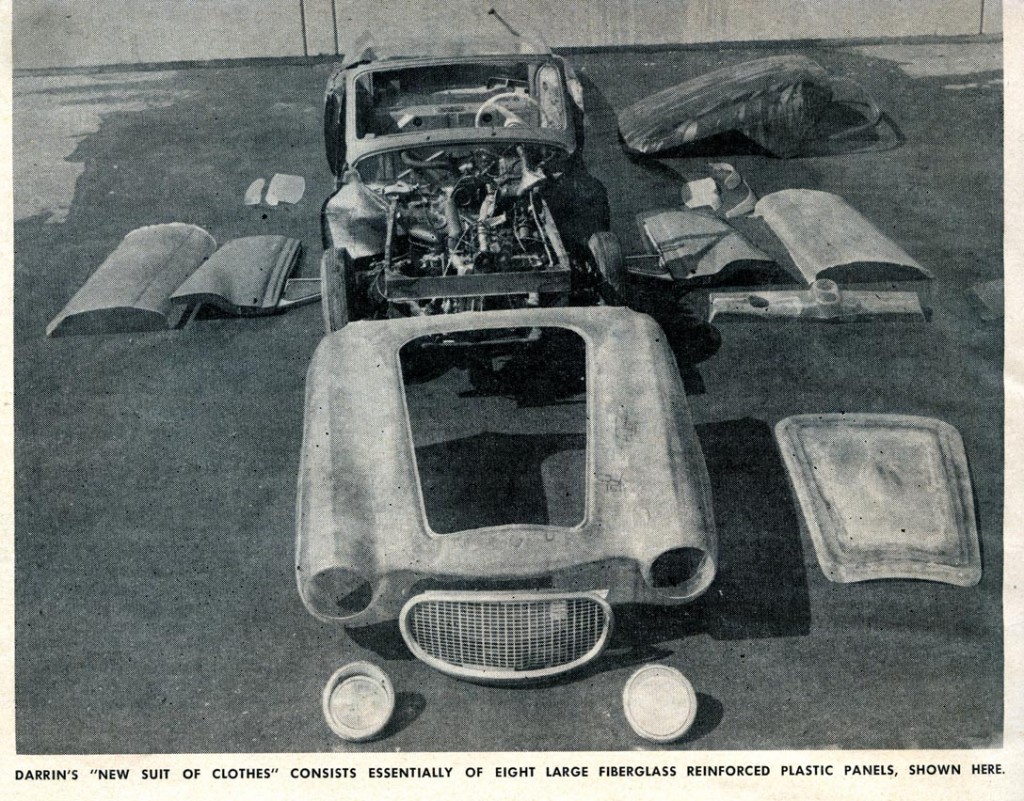 Standard equipment of this sports car will be the diminutive, three-cylinder, two-cycle engine which has as many power strokes as a six-cylinder power plant of conventional design.  With an advertised horsepower rating of 45 bhp at 4250 rpm, the car will probably give a fuel consumption figure of around 28 miles per gallon, which puts it into the economical sports car operating class.

Because of its design, the engine is advertised as having only seven moving parts, with no camshaft, drive train, valves, tappets, and sundry other parts to worry about.  The DKW is a front-wheel drive, thus no drive train hump on the inside of the car to cramp long-legged passengers is to be found.

One interesting point well worth mentioning to prospective purchasers of this new sports car:  Auto Union, manufacturers of the original DKWs in Germany, will extend a new car guarantee to the Flintridge DKW Darrin Mark II, indicating that the home plant is in accord with the DKW’s “new suit of clothes!”

Just at press time, Cy Olbrich, general manager of Woodill Fiber Glass Body Corporation who is in charge of the production of the DKW-Darrin at their Santa Ana facility, announced that B. R.Woodill, president of the firm, had successfully completed negotiations in Puerto Rico for a manufacturing plant to be built in that country.

Big advantage of such an operation is that there are no taxes whatsoever for 10 years on the project, enabling the firm to set an even lower sales price on the finished cars. 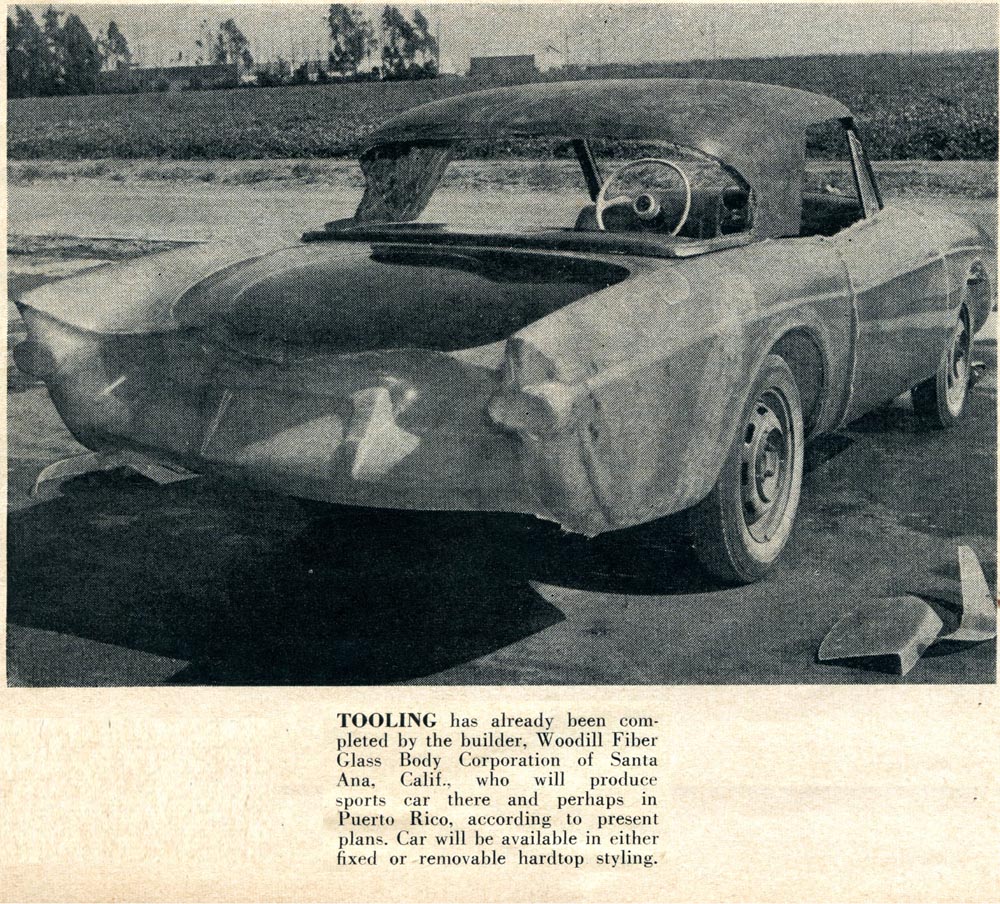 So gang….where are the DKW Flintridge sports cars?   Very few have been found, and none restored.  What a great addition to any Concours d’ Elegance this Darrin-designed sports car would be!

If anyone is up to the research task, I’d like to find the principals who were part and parcel of making this project happen.  The Darrin family is already on board, but the folks that were part of Flintridge Motors would be wonderful to find.  If found, I would hope they might have photos and stories to add to the legacy of this car and the impact of their automobile ideas and dealership on the Southern California sports car community of the ‘50s. 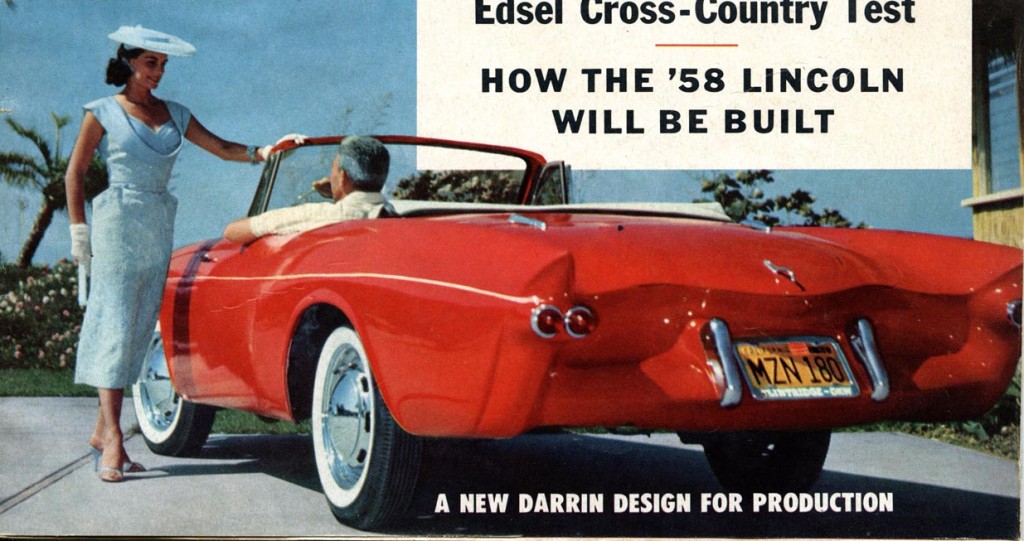 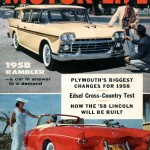 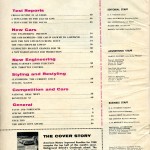 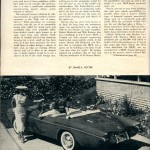 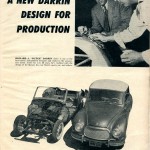 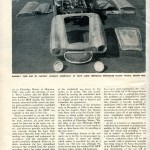 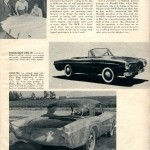 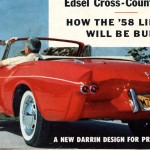 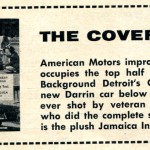 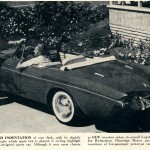 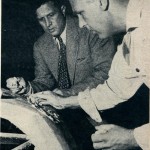 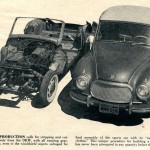 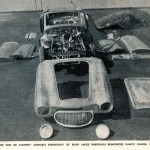 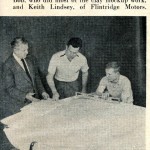 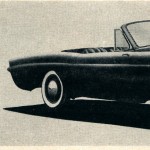 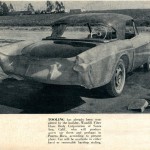 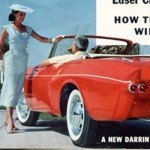