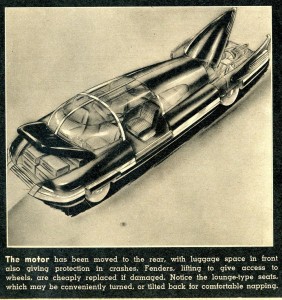 How promising and “futuristic” the “future” must have seemed back in ’42.

Today’s story came in from a good friend in Arkansas – Mike Wittman.  Mike has been a friend of fiberglass ever since he saw the first ad for a Meteor SR-1 back in ’56 from Dick Jones.

A few years earlier, he was friends with Hal Brown who built the Citroen based Allied sports car (click here to review the Hal Brown Allied story).

Mike is one great sports car guy with fiberglass running throughout his veins.  So when he sent this article to me, it was something I paid close attention to.  And it turns out, it was for good reason.  In fact – two good reasons:

By the time this article was printed in ’42, only two fiberglass cars had been produced:  the 1941 Ford Soybean car and the Kaiser Fiberglass prototype car – but only the Ford car had been shown to the public – the Kaiser car was still under wraps as a developmental project, so the idea of plastic bodies in this article was futuristic in every way.

And with World War II starting less than one year earlier, the future must have seemed further away then ever – hence the need to renew the optimism and look forward to better times.

Let’s see what Spot Magazine had to say about what was coming down the pike in terms of futuristic automobiles – in plastic – to a postwar American public. 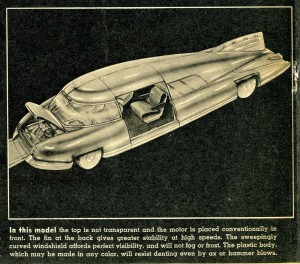 Here It Predicts, “The Plastic Body, Which May Be Made In Any Color, Will Resist Denting Even By Ax Or Hammer Blows.”

When, after the present war is over, your first new car is driven up to your door, you’ll be in for a lot of surprises. Some will be startling and all will be pleasant.

Unless you are one of the stand-pat conservatives who will buy the small number of 1942-type cars that will at first be made from old dies that have not yet been scrapped, you will be driving an automobile such as you may have imagined for your grandchildren, but never for yourself.

It will be lighter, stronger, safer, more comfortable and more economical than any car now made.  It will probably be air-conditioned, will be immune to damage from minor bumps and scratches, and will in inexpensive to repair.

Best of all, if it is a light car you have ordered it may nick your pocketbook for no more than $700.  At that price it will be a million-dollar value.

The first model of your postwar car has not yet been built.  But you can bet it’s already on the drawing boards of the manufacturers, and all of its component parts now exist.  The plastic which will make up the body is in wide use.  The shatter-proof, fog-proof and frost-proof Plexiglass which will be used in windshield and windows is being used now to cover forward compartments and rear-gunners’ “blisters” in our big bombers.

The light-metal alloys which will replace steel in frames and structural members are going into bombers and fighters now, but in improved form will be available for automobiles after the war.  The reduction in weight in frames and bodies will make your car 1000 pounds lighter.  And that will increase both your gasoline and tire mileage.

Air-conditioning units will keep you comfortable, Summer or Winter; Polaroid body tops will permit passage of ultra-violet rays so that you can get a healthful, open-car tan; except for the driver’s seat the seats will be adjustable, easily tilted back for napping or turned to permit conversation, as well as capable of being moved out of the way to give room enough for sleeping in the rear of the car.

Safety belts incorporated into the seats will materially reduce injuries in crashes.  Here are a few of the innovations to expect: 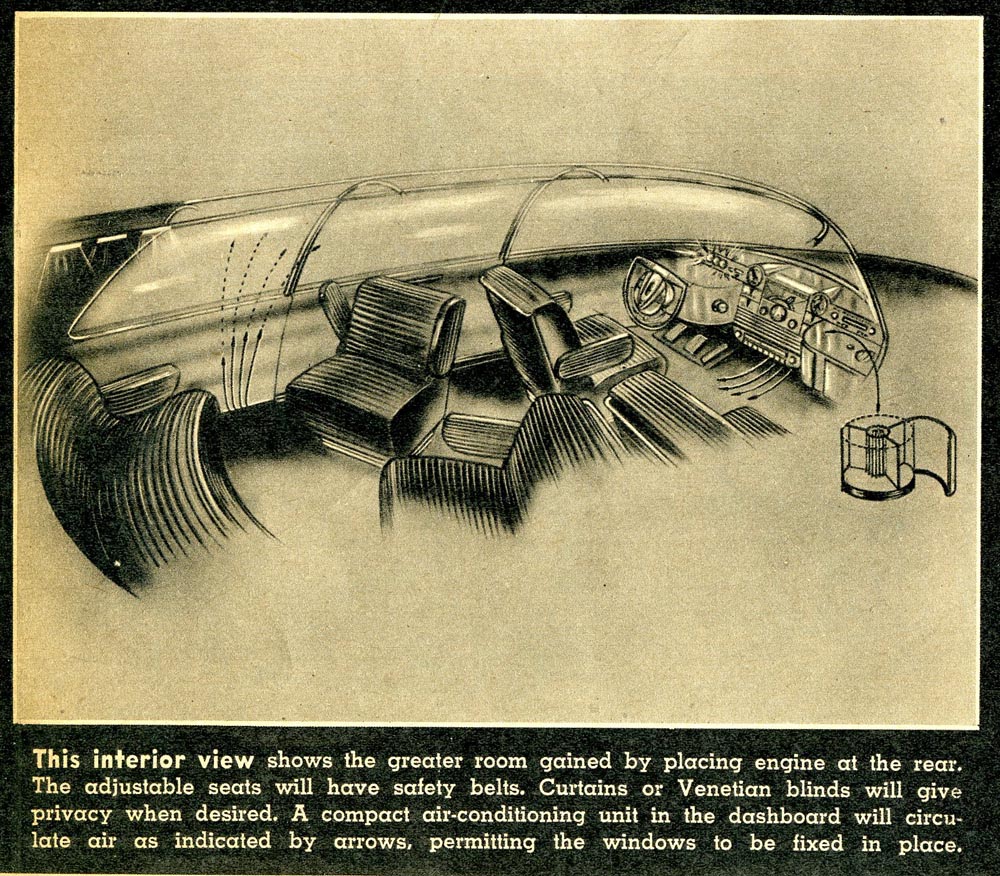 BODIES:  Part or all plastic, unpainted because color is incorporated into the plastic, highly resistant to dents and scratches.  Overall aerodynamic design, reduction of the fore and aft overhang to make handling and parking easier.  Wider windshields, greater vision, top optionally transparent.  Added roominess.  A metal bumper around entire car, and possibly a fin on either side of the top to increase stability at high speed.

ENGINES:  Located in the rear, with luggage space in front.  Lighter engines, possibly air-cooled, with superb performance.  With higher compression, they will use new high-octane fuels, perhaps a mixture of two-thirds gasoline, one-third alcohol.  Influenced by Diesel experience, they may even burn solid gasoline injected without use of a carburetor and ignited by compression.  Greater mileage – at least 30 miles per gallon for light cars.

EQUIPMENT:  Instrument panels will be reduced in size, making room for air-conditioning apparatus.  New generators giving far more juice will make possible built-in radio telephones enabling drivers to talk to anyone having a receiver, although these will probably wait for awhile.  Traffic lights may be done away with in time, in favor of red and green lights on the dashboard, operated by radio signals which will also give warning of cars approaching from side streets.

All these and many more innovations will feature your postwar car.  The accompanying drawings give you a preview idea of what it will look like.  The designs are by Martial and Scull, Industrial Designers, for Mechanix Illustrated. 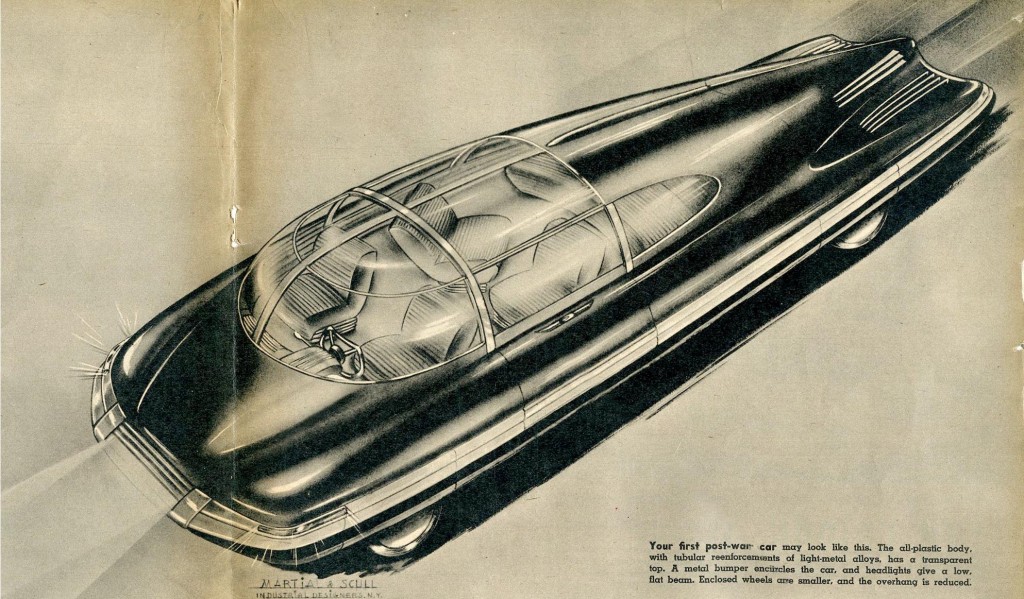 Look at the size of the interior shots of the car – this must be every bit of 20 feet long – or more.  I think the industrial designers “Martial & Scull” who designed this car did a great job and it sure represents what the future looked like from the ‘40s looking forward.

I did a bit of checking around on this design team and it seems like Martial & Scull did quite a bit of design work that was published in the ‘40s and ‘50s.  I wonder if some of their families are still around…no doubt it would be great to learn more about who these men were, and what other futuristic ideas they brought to the design table. 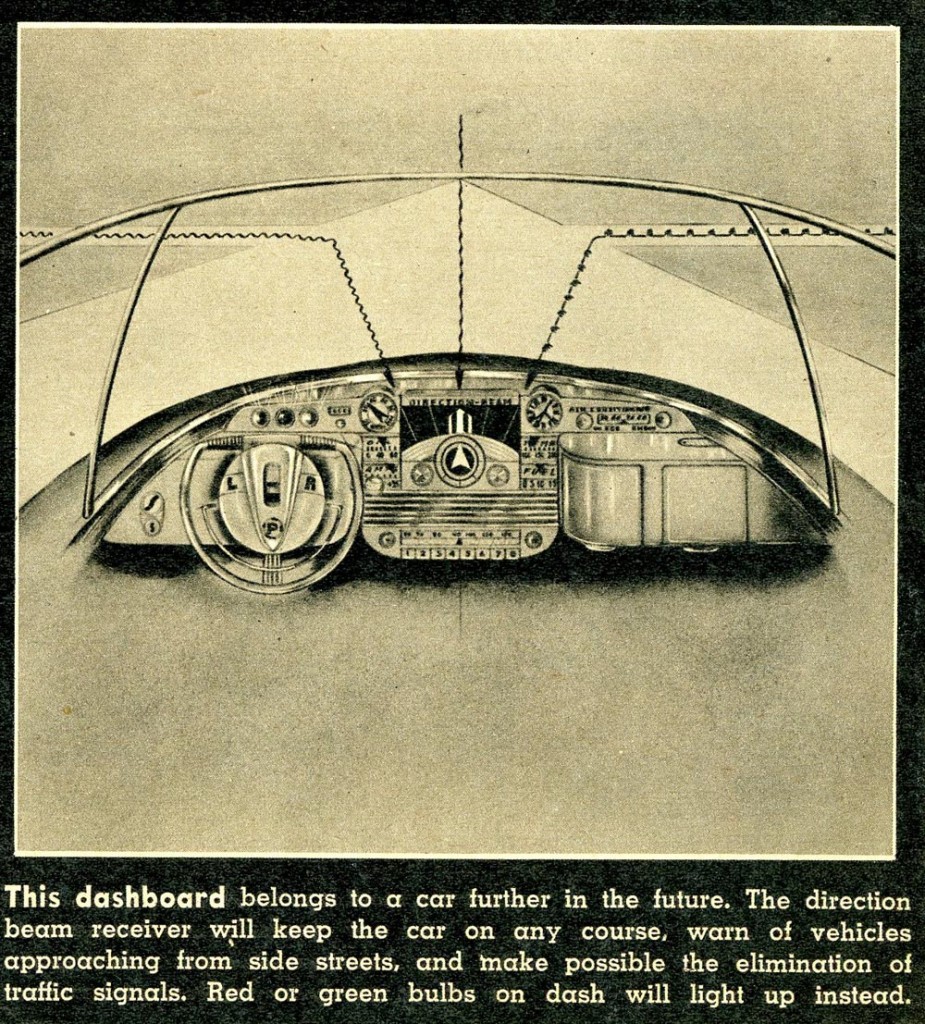 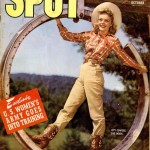 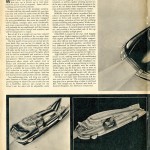 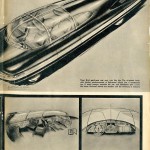 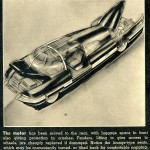 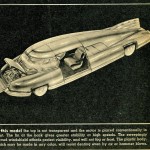 Here It Predicts, “The Plastic Body, Which May Be Made In Any Color, Will Resist Denting Even By Ax Or Hammer Blows.” 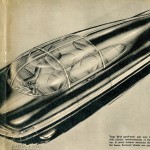 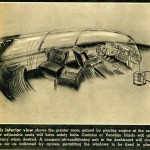 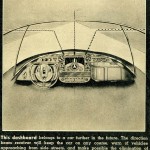 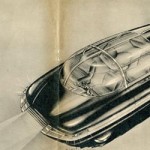