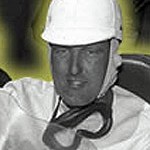 This is the second installment of  a 3 part series of articles on the Johnny Dark Victress, Virgil Rice, Mack Hellings, Bob Stelling, the Hellings Company, and Stelling and Hellings.  Here are links to the other parts of the story:

I know…. You’ve been waiting on the edge of your seat for part 2 of the story.  Let’s talk about the movie and the Victress.

While the movie debuted in America in June of 1954, the racing segments were filmed in September 1953 near Reno Nevada.   As reported to me by Chuck Tatum who drove his own race car during the film (The Tatum Special), most of the race scenes were filmed coming down off Mount Rose near the ski area in Nevada, some were filmed from Carson City coming back to Reno, and filming also was done at Pyramid Lake.  Chuck also remembers that the helicopter shots in the movie – some of the first in racing film history – were filmed in the Carson City area.

Choosing the Victress for the Movie:

How the Victress was chosen isn’t known, but I can guess how it might have happened.

The first advertisement for Victress that Rick D’Louhy and I have found appeared in the July 31st1953 edition of Motor World.  The “Hellings Victress” by Virgil Rice is shown as completed, and in the ad the public is invited to stop by Hellings and see the car.  The next month, the Guy Mabee special set the speed record at Bonneville in August of 1953 and was soon to be known as the “World’s Fastest Sports Car.” 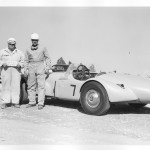 Race Car Builder, Race Car Driver, and Good Friend Chuck Tatum Drove His Own Car, the Tatum Special, in “Johnny Dark”. The Name of His Car in the Movie Was The “Antelope Special”.

We know from direct interviews with Chuck Tatum that they were still choosing cars for the movie when they brought Chuck Tatum on board via his first meeting with Universal Studio Execs at the 1953 Labor Day race at Santa Barbara (early September, 1953).  So if the selection time frame for the car was August and early September 1953, the Hellings Victress would have been seen at least twice in magazines (we’re still searching for more early ads), and the Victress bodied Guy Mabee special would have received acclaim during the same month (August 1953).

Plus, Victress and Hellings were close by to Universal Studios making the choice for the Victress to be included in the movie an easy and excellent decision.  The Victress Manufacturing Company of North Hollywood California was gaining fame across the country.

No doubt, Victress was the new company to watch in 1953!

In the movie, the Victress was driven by “Duke Benson” played by actor Don Taylor, and was the favored car to win.  Only the talents of “Johnny Dark” and his Idaho Special (Woodill Wildfire) could beat this car in a surprise / not so surprising ending where Johnny Dark wins the Canada to Mexico race to fame and edges out the Victress for the victory.

In the movie, actor Don Taylor was at the wheel.  However, the actual driver for the race scenes was Don Freeland, as told to me by Pat Boyce Smith, wife of Doc Boyce Smith, and Merrill Powell.  Don Freeland was a race car driver and friend of Doc Boyce-Smith who raced in his first Indianapolis 500 in 1953, and continued at Indy 7 more times with his best finish in 1956 in 3rd place.  Quite a talented driver!   Merrill Powell also relayed to me that Doc Boyce-Smith owned 2 track roadsters, but did not drive them.  Instead, Don Freeland was one of the drivers Doc used during the time he was interested in racing. 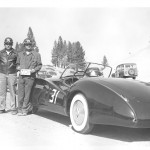 Great Behind the Scenes Shot of Driver and Co-Pilot Who Drove and Navigated the Car During the Movie. The Victress (Thunderbird) Would Have Won 1st Place if not for the Excellent Driving of Tony Curtis and His Idaho Special (Woodill Wildfire).

I found the following information about Don Freeland on www.lifeinlegacy.com

Don Freeland was a racer who drove in the Indianapolis 500 eight times (1953-60) and finished third in 1956. Freeland began racing roadsters shortly after the war and moved up to AAA and USAC competition in 1952. He had 36 top-10 finishes and was third in the 1956 USAC championship points. He died in San Diego, California on November 2, 2007 at age 82.

Additional information can be found about Don on Wikipedia:  Click Here to Review this Information on Don Freeland

An interesting fact about the Johnny Dark movie concerning the drivers of the cars:

This was one serious approach to a 1950’s sports car movie, and this important fact is often overlooked today.

Meet the “Thunderbird” – A Studebaker Sports Car Bar None.

Each of the cars had “movie names” in Johnny Dark, and thanks to the help of the archivists at Universal, we now have pictures of each of the cars and their movie names too.  In the movie, the Victress was called the “Thunderbird.”  This was interesting because as I tracked down the source of this name, a Studebaker Historian reported to me that Studebaker had plans on using this name for one of their cars from the late 1940’s thru the early 1950’s.  In fact, some of the Studebaker shields on cars during this time period (1950 and 1951) actually have a picture of a “Thunderbird” as part of the shield/logo. 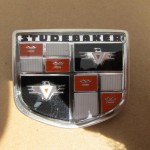 The Current Owner Has Begun Restoration of the Johnny Dark / Hellings Victress. Here the Front Nose Badge Is Shown and is Recently Restored.

In researching the history of Virgil Rice, we know that he was a consummate Studebaker enthusiast and later owned at least one Avanti and other Studebaker cars too.  No doubt he was aware of the use of the logo, and in fact used the 1950 and 1951 badges on his car (front nose and dashboard).  The full story of the Studebaker name “Thunderbird” appears in the publication “The Studebaker Almanac” in a column called “Turning Wheels” by Richard Quinn.  It was printed in July 2006, and a scan of this article is shared below.

This leads to another interesting question as to whether or not the Hellings “Studebaker powered” Victress was being touted as a possible sports car for Studebaker to consider.  No evidence, though, has ever been found to substantiate this point, but it is interesting to note that Studebaker parts were used in other cars most notably the Victress S4 and the Glasspar Ascot.  And there was some talk of this with the Glasspar G2.

More about these cars and their relationship to Studebaker in future stories.

The car was found back in the early 1960’s by a collector who already had one Victress S1, but now was looking for another one that was a better build.  However, the Johnny Dark Victress he found was in sad, sad shape.  It’s still owned by the same person, and he remembers finding it in the following condition:

The car was sitting half in and half out of a car port, the dash right at the roof edge. It did not have a top on it and had been sitting in that position for more than a year since the guy that bought it died. The seat material was dry and cracking from the sun and rain, the carpets were ruined. Rats had been in it since the property had a number of fruit trees.  Not in great shape but a fantastic car in every way. 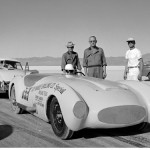 At Bonneville in August 1953, Guy Mabee Made History with the Guy Mabee Special Making the Victress the Fastest Sports Car Body in the World.

In addition, he learned a few tantalizing details:

When the new owner bought it, he decided to get it running where it was and drive it home.  On his drive home, he got a ticket – the headlights were too low for California law (this happened to a lot of the folks who built fiberglass sports cars back in the 1950’s).

Click here to read the recent article on our website about this very problem published by Eric Irwin in Motor Trend in November 1951.

All of this activity sent sales spiraling upward for Victress.

While 27 Victress S1 bodies had been produced by late November, 1953, Merrill Powell estimates another 50 S1A bodies were made in 1954, and about 25 more from 1955-1961.  In 1961, the Victress company was sold to LaDawri along with the molds for each of the cars giving us a production estimate of Victress S1/S1A bodies of around 100 for these years (1952-1961).   These are Victress only production figures and do not include LaDawri production figures who built additional Victress bodies under a different name from 1961-1965.  More about that in a future story.

I’m pleased to say that the current owner of the Hellings built “Johnny Dark Victress” has begun the restoration of his car, and plans to have it ready for show in the summer of 2011.  No doubt 2011 will be another stellar year, once again, for the Victress name – and Stelling and Hellings too!

Until next time gang….Glass on….

Race Car Builder, Race Car Driver, and Good Friend Chuck Tatum Drove His Own Car, the Tatum Special, in “Johnny Dark”. The Name of the Car in the Movie Was The “Antelope Special”.

The Current Owner Has Begun Restoration of the Johnny Dark / Hellings Victress. Here the Front Nose Badge Is Shown and is Recently Restored. 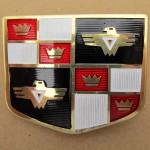 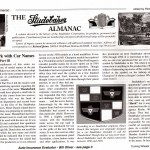 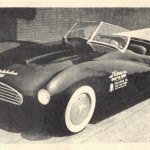 Great Behind the Scenes Shot of Driver and Co-Pilot Who Drove and Navigated the Car During the Movie. The Victress (Thunderbird) Would Have Won 1st Place if not for the Excellent Driving of Tony Curtis and His Idaho Special (Woodill Wildfire).

At Bonneville in August 1953, Guy Mabee Made History with the Guy Mabee Special Making the Victress the Fastest Sports Car Body in the World. 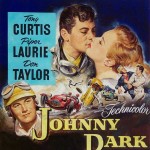 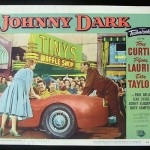 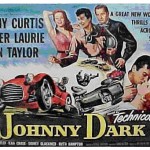 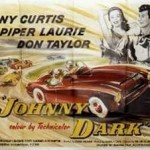 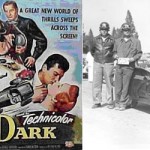