As you know, I’ve been collecting more stories from each person who either has a vintage fiberglass car or built one back in the day.  Recently, I asked my good friend, Jean Poirier, about writing up a story on his Glasspar G2 and the story of how he found it and brought it home.  He was gracious to do so and agreed to share it on our website.  His story is below.

But Jean is not the average Glasspar G2 owner.  In fact, Jean is the person who put together the initial Glasspar G2 Enthusiasts group back in 1994 which grew to include all known Glasspar G2 owners at the time, and the Tritt family too.  This wasn’t an easy time to create such a club. The Internet was just getting started, and finding the actual owners of G2 cars was like finding the proverbial “needle in a haystack.”

Hats off to Jean Poirier and his tenacity in making this club a reality at that time.  Several years later, Bill Hoover would take over the reins and bring the G2 club into the digital age as well with website support from Hemmings magazine.  For those of you who are interested in seeing the Bill Hoover Glasspar G2 newsletters, click on the following link:

So that’s the back story.  Let’s learn a bit more about the Glasspar that Jean owns, and how that car fanned the flames of his interest in vintage fiberglass sports cars.

Jean’s Glasspar G2 is a Real Solid Car. I Can’t Wait Until He Takes the Final Steps and Is Ready to Debut His Glasspar.

In Jean Poirier’s Own Words:

“It was the summer of 1968 my Dad and I made a short trip to the local grocery store for hot dog rolls or something, We drove by a body shop some two miles from my house, and there she was – the most beautiful car I have ever seen. I begged my Dad to turn around like a six year old begging for an ice cream cone. He smiled at me as we turned around to go back. In about three minutes I had gone all over the car determining it had a Chevy V8, 1953 Buick headlights, bucket seats and no top.

As I continued to dissect the treasure, the owner (Clyde) came out and told me he didn’t know what the car was but it had a 55 Chevy frame and running gear. Clyde said he had bought it at a police auction that morning, and it had been a stolen car.

Even though I didn’t buy the it, I kept my eyes on the car all through my years at trade school where I was learning to be a auto mechanic.  As I watched from afar, the car underwent many changes – some good some not so good.  The four small round tail lights were changed to two, the engine was detailed and the car was primed.  Bucket seats from a GTO were installed but were too big, so out came the jig saw.

Four years had gone by and I heard the car was for sale, I couldn’t get there fast enough!.  We made a deal and I agreed to buy the car for $175.00 without the mag wheels.   I even took my three month pregnant wife for a test ride in it.  Then, I went over to my parent’s house to tell them the great news.

They just looked at each other and asked me questions, like “how are you going to bring your new baby home from the hospital? How are you going to do food shopping”.  I could only afford one car and one insurance payment.  Reality had set in!!!  I had to go back and tell Clyde I couldn’t buy the car. 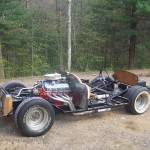 Jean’s Done an Excellent Job at Restoring the Frame and Running Gear. This is Going to Be One Heck of a Ground Pounder!

Soon I heard it was sold to someone else in town – a kid I went to school with.  The 283 came out and a 350 went in.  Somehow they broke the windshield changing the motor and had installed a huge flat glass windshield like you would see on a dune buggy,

Years went by I would always read the classified ads in hopes of finding the car again, which by this time had probably changed hands many times. Then one day it happened!  “No” not what your thinking, but something better.  The ad read “Kit Car for sale – possible Kaiser Darrin prototype.

I drove an hour and a half across Connecticut to see a beautiful unmolested Glasspar G2.  The paint was peeling, the Henry J engine had a broken timing gear, and the kids in the neighborhood called it…”the car that never ran.”  It had a flat head six with a three speed on the column. The owner told me how much he loved the car and wanted it to get a good home.

I had been building and rebuilding it ever since.  I’ve tried three different engines in it and two front ends.  I’ve had the body on and off at least twenty times. A dozen hot rods have come and gone but I have never considered selling the Glasspar.  It’s a family member now, but years of other projects, raising kids, owning three different homes, and seven years of taking care of elderly parents have meant delay after delay.  But I still get goose bumps when I look at her.

The one thing I see in Glasspar G2 owners is a true love for the style and grace this car exudes.  It looks fast, elegant, and sexy – all at the same time. I don’t understand all the fuss over Picasso’s or Rembrandt, but the beauty in a Glasspar – I really get it!!!

Thank you Bill Tritt for bringing this into my life.” 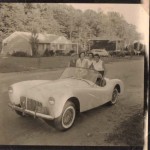 Here’s the Only Vintage Picture of the Glasspar G2 That Jean Owns. Rodney Packwood and I Will Have to Go Thru Our Vintage Photos and See if We Can Find More History On This Car.

I asked Jean if he had learned any of the history on his specific Glasspar G2.  He had, and you can see the early photo of his car in the gallery below.  In addition, he provided the following information:

I purchased it from Mr Lloyd Finnie of Connecticut and he bought it from his boss who came from California with the car. His boss, Karl K. Rauch had sold the car to Lloyd and then moved back to California.

Thanks again to Jean Poirier for the detail of the car and the wonderful story of how he got involved with Glasspar.

Anyone else have a story of their car they would like to share?  If so, let me know and I’ll be happy to feature it on our Forgotten Fiberglass website.

Until next time gang….Glass on….

Jean’s Done an Excellent Job at Restoring the Frame and Running Gear. This is Going to Be One Heck of a Ground Pounder!

Jean’s Glasspar G2 is a Real Solid Car. I Can’t Wait Until He Takes the Final Steps and Is Ready to Debut His Glasspar. 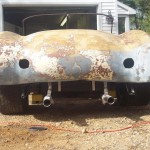 Here’s the Only Vintage Picture of the Glasspar G2 That Jean Owns. Rodney Packwood and I Will Have to Go Thru Our Vintage Photos and See if We Can Find More History On This Car. 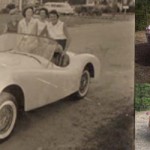