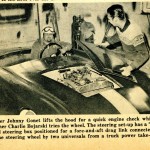 Caption: Johnny Gonet lifts the hood for a quick engine check while partner Charlie Bojarski tries the wheel. The steering set-up has a ’41 Ford steering box positioned for a fore-and-aft drag link connected to the steering wheel by two universals from a truck power take-off.

Meteor SR 1 articles are coming out of the woodwork!  Dick Jones, Meteor SR1 designer and builder would be proud 🙂

This article will be new to most of you.  It’s from some super-sharp builders from back East – Long Island to be exact – and that’s pretty rare to hear of one of these being built on the East Coast.  Heck, most of the magazines covered only West Coast builders, so finding this article is like finding the proverbial “needle in the haystack.”

So…let’s get your “glass-on” gang and dig in.  This is one really cool build and a very special Meteor too!

Bolt On A Fiberglass Body

No, It Isn’t Easy And Don’t Believe Anyone Who Tells You That It Is!
But If You’ll Use A Little Foresight, You Can Build An Outstanding Lightweight Speedster
Story and Photos By Al White

Let’s face some hard facts!  The ads, articles and instruction books you read every day can be extremely helpful – and they can also be extremely misleading.  You may have read, for instance, that it’s a simple, twist-of-the-wrist matter to buy a complete new fiberglass body and bolt it on any old chassis that’s handy.  It would be nice if this were true, but unfortunately it isn’t.

You can, of course, buy a fiberglass body, and you can bolt it on.  But in between those steps, there is a great deal of work involved – work that the ads don’t mention.  It isn’t a good idea to undertake such a project unless you’re prepared to put some sweat and elbow-grease into it.

As an example, take the rig pictured here.  It belongs to Johnny Gonet and was built by Johnny and Charlie Bojarski, co-owners of Charnet Automotive on Long Island.  Johnny has been tinkering with rods since he was old enough to lift a wrench.  Being a confirmed rodder, but still having a desire for a sporty type of car, John decided to buy a ready-made Meteor fiberglass body. 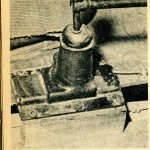 Caption: One problem Johnny encountered was setting up a remote-shift arrangement. He used a shift head from a 1939 Ford transmission screwed to a wooden frame bolted to the floor over the drive shaft.

The Meteor, of course, is only one of many bodies available, at prices ranging from about $200 on up.  Most of them are styled to resemble the last word in sports cars, and any one of them would be a good choice for the fan who likes this school of styling and is willing to do the work involved.

When one of these bodies is purchased, all you get is the bare shell.  Thus, the first step for Johnny was to procure a suitable chassis.  After extensive searching, it developed that there were none available of exactly the length he needed.  However, John had a set of ’34 rails just gathering rust, so he decided they’d have to do.

He had to cut 15 inches out of the frame and weld the shortened result back together again, but when that was finished, a major part of the labor was behind him.  Next, outrigger-type brackets made of angle iron were welded to the frame and the body fitted.  That may sound simple, but it too involved plenty of sweat.

The actual connection of the body to the frame was accomplished by drilling holes in the casting lip on the inside bottom edge of the body, and running bolts through them down into the frame and the added brackets along the frame.

With the body substantially mounted, Johnny had to turn carpenter and fabricate plywood sections for the interior of the cockpit compartment.  He also had to find and fit all items of hardware, since none of these are supplied with the body.   At this point, the job called for plenty of ingenuity as well as plain hard work.

All told, bolting on a fiberglass body involves as much time and effort as any other kind of automotive build-up.  But the result is unusual, sporty, and also lightweight and durable.  It’s worth the work!

What a great story that really showed us what it was like to build what Rick D’Louhy and I call a “Generation 1: 1951-1956) fiberglass sports car, back in the 1950’s.  The pictures are spot on and give you close-ups of key parts of the build and the challenges they had in putting it all together.  And as I mentioned before, it’s neat to see one of these documented and built on the East Coast.  This magazine is also an East Coast product, so they were covering “one of their own” – so to say. 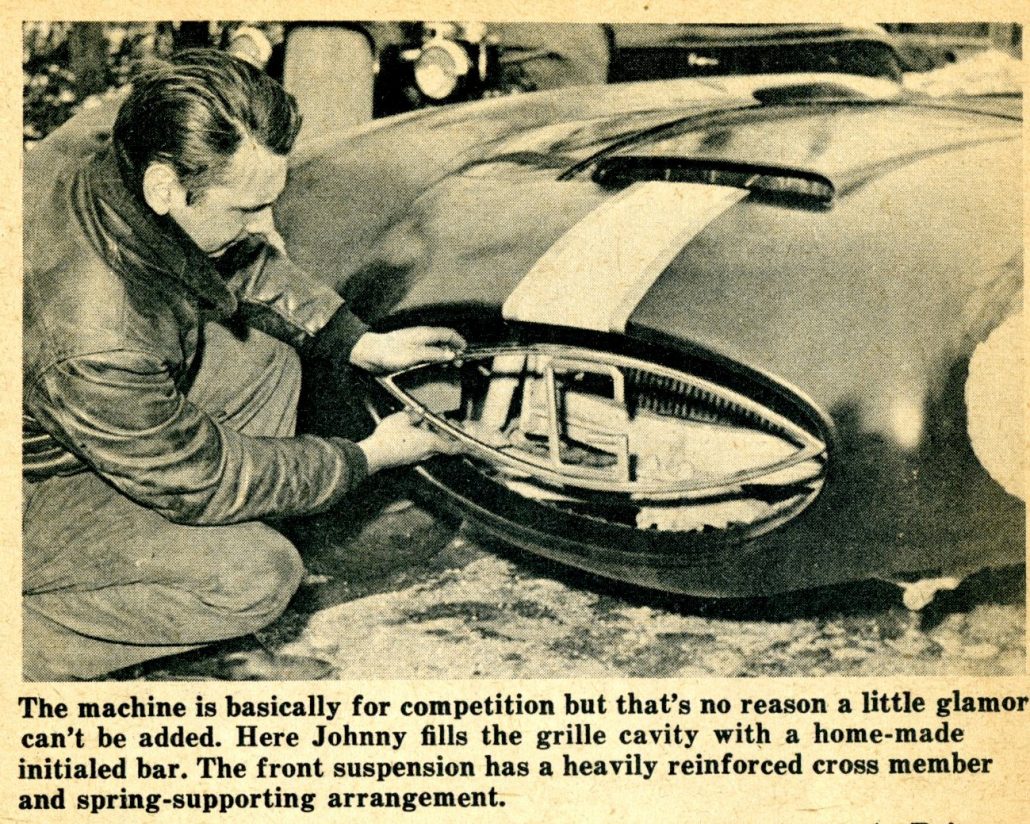 Caption: The machine is basically for competition but that’s no reason a little glamor can’t be added. Here Johnny fills the grille cavity with a home-made initialed bar. The front suspension has a heavily reinforced cross member and spring-supporting arrangement.

What a great car this would be to find.  I did a preliminary search for some of the names in the story, but came up short.  I love the fact that Johnny Gonet added a signature “G” for his name in the grill of the Meteor.  That would stand for “Geoff” nicely – but also “George” and “Gary” and any other “G-Men” we have out there.

So go forth and find.  Search and seek and let us know what you uncover.  This would be one wonderful car to bring back to the forefront of automotive enthusiasts – the Johnny Gonet Meteor SR1 Special.  And we would love to feature your find, here at Forgotten Fiberglass. 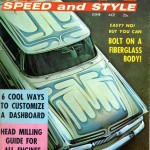 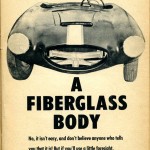 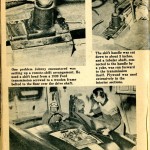 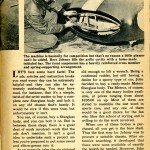 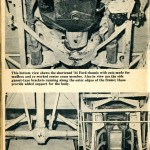 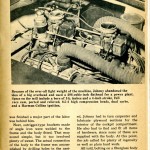 Caption: One problem Johnny encountered was setting up a remote-shift arrangement. He used a shift head from a 1939 Ford transmission screwed to a wooden frame bolted to the floor over the drive shaft. 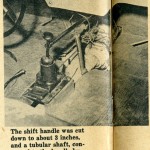 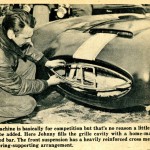 Caption: The machine is basically for competition but that’s no reason a little glamor can’t be added. Here Johnny fills the grille cavity with a home-made initialed bar. The front suspension has a heavily reinforced cross member and spring-supporting arrangement. 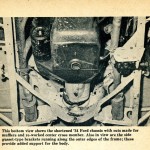 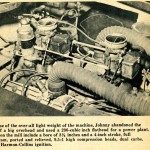 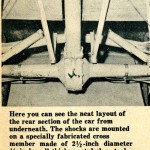 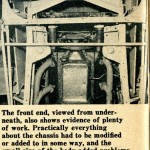 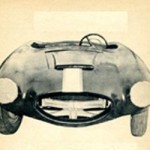