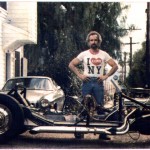 Here’s Norm Proudly Showing Off His Completed Chassis In The 1980’s.

Another research story for you gang – and a car for you “Los Angeles” guys to find.  I’m sure the owner would appreciate being found too!

“In this month’s newsletter, I feature Norm Jensen’s Glasspar G2.  Look very closely at the pictures and compare the height of the front and rear decks to the fenders.  The longer you look, the more you discover.  This G2 has it all, beauty, and muscle.  I would love to see this baby go down the quarter mile.  Thank you for your contribution to the Newsletter Norm.  Your friend, Jean Poirier.”

Then, in a series of 3 color photos, Norm himself explains in the newsletter about his G2: 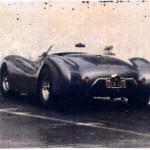 “This is mine (Glasspar G2).  Virgin body found in March 1965, took 4 years to build, but was destroyed in 1977.  Found another wrecked body, grafted 16 pieces together and fabricated a new nose.  I sculpted the cowl to windscreen line.  There were no doors.

The fresh chassis was built in 1965, it now has a Cadillac engine, TH400 GM Hydramatic transmission, and Oldsmobile 3.08 rear end.  All the fabrication was done by me including body, paint, leather, chassis, wiring, drivetrain, dash, trick stuff – everything.  It runs in the low 10’s, 130 mph, and in the quarter mile exceeds 160 mph on the speedometer.

It still gets my attention.

Continuing my research, I became friends with Bill Craddock who in the early 1990’s started the “Vintage Kit & Custom Club.”  This club was short lived and only produced two newsletters, but kudos to Bill and his enthusiasm for starting such a club so early on when information was impossible to find, cars were hidden and unknown, and interest was lukewarm from the automobile community – at best.

Bill…you were a gutsy guy to do this at the time – hats off to you! 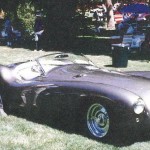 We’re lucky to have had Norm Jensen’s story told again in one of Bill’s two newsletters.  Here’s what Norm had to say:

“When I spotted a (Glasspar) virgin body on a lawn in Bell Flower in 1965, I grabbed it.  It was 3 years to running.  Then in 1977 I decided (it was decided for me) to totally redo the car.  I don’t drive it much now, but it’s there when I want it.  Power is a nasty 429 cid 1965 Cadillac with an TH400 transmission.  I did all the fabrication, from modifying the 1951 Ford frame to stitching the leather.  I modified the body, painted it, made the dash, built the engine – everything.

Mine is one of the best, oh hell, it is the best, partly by virtue of being so recently built as to benefit from the modern fanaticism for quality.  They weren’t so detail conscious in the 1950’s – believe me, I was there.  I’ve had offers from across the water that you would not believe.  I’ll never be able to do this again, so I don’t want to sell at any price.

Sort of a life’s work after all the time and it really did come out nice.

In the late 1990’s, Bill Hoover took over the reins of the Glasspar G2 club, and was in contact with Norm Jensen.  Norm was one busy guy, and he must have loved his Glasspar G2 quite a bit!  Here’s what Norm had to say to Bill about his car: 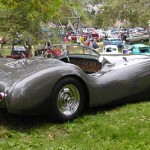 This Photo Of Norm’s Car Was Taken By Fiberglass Friend Tony Miller – Not Too Many Years Ago At A Los Angeles Car Show.

The 12 year restoration was completed in 1988.  I’m the original builder both times.

I modified the body thusly: I fabricated a new “nose” (hood line forward), frenched the headlights, installed a Jaguar gas cap in it’s own frenched well, glassed in the passenger side door (each of the bodies I owned had just one door), swept the cowl up to meet the windscreen which was a very laid-back MGA on my own fabricated brackets.

The dash is Carpathian Elm Burl with my own gloss finish.   It’s 10 years old and no cracks yet.  It has a full set of Stewart-Warner instruments in the dashboard – which I built.  The interior is light grey leather with black pica carpets – I designed and stitched it myself.

The engine is a healthy 429 CID (bored over to 437) 1965 Cadillac with (high performance) cam and pistons, headers, intake manifold, and cylinder head modifications and porting.  It has an HEI ignition, and 800 CFM Quadrajet Carburetor. 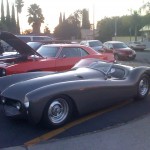 Last Sighting Of Norm Jensen’s Glasspar Was Just Months Ago – In The North Hollywood Area.

The car is painted base coat, base coat, clear coat, acrylic enamel with mix of metallic grey over purple base.  It has chrome wheels with knock offs and special offset rims of 8” rear and 7” front.  The car hauls ass like Madonna’s “undies” and gets more attention than a Lamborghini on fire.

Finding Norm And His Glasspar G2

I have more information written by Norm and he was quite a writer.  Much of what he said is on target, but much of what I didn’t share in the story today is exaggerated.  That is, it’s fun to read, but not historically accurate.  Norm did his best for remembering details, but as I said before, there wasn’t as much information available back then, so he filled in some “gaps” with information as he could best remember.

Norm was 54 years old back in 1994, and I began tracking him and his car down several years ago.  I was able to find his father, Otto Jensen, and he told me the sad news that his son had passed away on June 29th, 1998, and that the car was sold to a collector.  It hadn’t been seen since.

However, in 2010 there was a sighting in the Burbank area and Glasspar Aficionado Rodney Packwood jumped right on it.  Tony Miller also saw the car in the same area several years ago, so it still appears to run around Los Angeles – at least secretly as far as our group is concerned.

So…if you know the owner of this fine Glasspar out there, have him get in contact with our group.  He’s got a great car and we’d be honored by his addition.  And…we have more information about the build of his car too!

Here’s Norm Proudly Showing Off His Completed Chassis In The 1980’s. 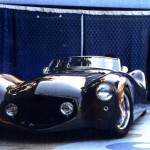 This Photo Of Norm’s Car Was Taken By Fiberglass Friend Tony Miller – Not Too Many Years Ago At A Los Angeles Car Show. 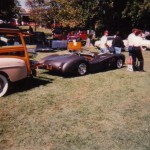 Last Sighting Of Norm Jensen’s Glasspar Was Just Months Ago – In The North Hollywood Area. 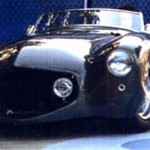