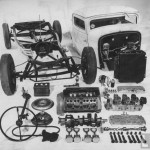 Here We Have Here A Nice Layout Of Parts Needed To Build A Hot Rod In The 1950’s – Most Of These Parts Are Needed For Building A Sports Car Too.

Note:  This is the first in a series of articles on the Robert Jackson sports car.  Click here to review all articles in this series

The answer, unless you had a lot of money, was……”build it yourself.”  If you could afford a sports car, you might be able to buy an early Jaguar XK120, maybe an MG, or perhaps a Porsche.  But to buy them required “fancy” dollars gang, and most folks who wanted a sports car would have to consider building one.

So if you peruse the magazines of the 1950’s, you’ll see articles which I’ve been sharing of sports cars you could build.  You could get your chassis plans from Hellings or buy a Mameco frame, for example.  You had different engine choices depending on the year, and of course you could build or buy your fiberglass (or steel/aluminum – if you were ambitious) body too.

But people wrote in to magazines for help on simple and complex questions.  That’s just the case when Robert Jackson from Freeport New York wrote to Hop-Up Magazine with a question back in April, 1953.  Here’s his letter and the response – for your review.

“Your magazine has given me the courage to attempt to build my own sports car.  I need good advice (as follows): 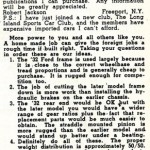 Here’s The Original Letter And Response From Hop-Up Magazine, April 1953

You can understand the need I have for correct chassis information.  I am more concerned with suspension, frame, brakes, engine mounting and differential, transmission, installation than body work.  I am confident about the body design.

Please advise or suggest correct plans or publications I can purchase.  Any information will be greatly appreciated.

P.S. I have joined a new club, the Long Island Sports Car Club, and the members have expensive imported cars I can’t afford.” 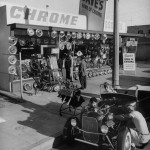 What A Great Period Photo Of A Chrome And Speed Shop From The 1950’s – Ford Flathead Engine Out Front To Boot!

And….here’s the response that Hop-Up provided by the Technical Editor (not identified in this issue by name):

“More power to you and all others like you.  A home made job can give the foreign jobs a rough time if built right.  Taking your questions in order, these are our ideas:

1: The ’32 Ford frame is used largely because it is close to the correct wheelbase and tread proportions and is generally cheap to purchase.  It is rugged enough for competition too.

2: The job of cutting the later model frame down is more work than installing the hydraulic brakes on the earlier chassis.

3: The ’32 rear end would be OK but with the later model you would have a wider range of gear ratios plus the fact that replacement parts would be much easier to obtain.  The straddle mounted pinion is more rugged than the earlier model and would stand up better under a beating.

4: Definitely do all of these.  The proper weight distribution is approximately 50/50.  You have to move the engine back to achieve this.

5: It would be a good idea to lower the frame in the rear and you could do this by kick ups, or Z-ing as shown in the April 1952 Hop Up (custom hints)

6: Dropped axles are used on most roadsters or coupes to get the front of the car down lower.  By moving your engine back, you will have room to reposition your radiator and can get the overall height down without resorting to this method.  I would recommend leaving the axle and springs stock (no heated springs or long shackles.) 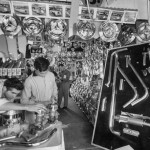 Inside Picture Of Same Chrome / Speed Shop Shown Earlier – These Types Of Stores Were Common Back In The 1950’s.

Your concern with chassis problems before the engine seems to us a start in the right direction.  Too many people starting out to build a car have a red hot engine first and then try to make their car handle.

For plans for a home built job using mostly stock components, you can write to Charles Manning, 7917 Vicksburg, Los Angeles, 45, California.  The price is two dollars.”

For those of you building / restoring a “period-correct” sports car, information contained in stories like this is critical.  Both to understanding what was used and how to do it as well as “being one” with the mindset of the times and how they built their cars.  This is one true way to really understand – and appreciate – your fiberglass bodied American sports car.

So…anyone want to go out and find Robert Jackson of Freeport New York from 1953?  People are like fish and don’t often swim far from the reef.  Using that assumption, that’s how I begin my research.  Anyone want to help?  Robert Jackson might have one interesting story to share with us gang…. 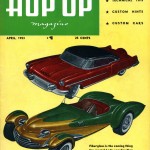 Here’s The Original Letter And Response From Hop-Up Magazine, April 1953

Here We Have Here A Nice Layout Of Parts Needed To Build A Hot Rod In The 1950’s – Most Of These Parts Are Needed For Building A Sports Car Too. 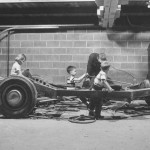 What A Great Period Photo Of A Chrome And Speed Shop From The 1950’s – Ford Flathead Engine Out Front To Boot!

Inside Picture Of Same Chrome / Speed Shop Shown Earlier – These Types Of Stores Were Common Back In The 1950’s. 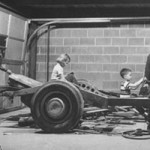