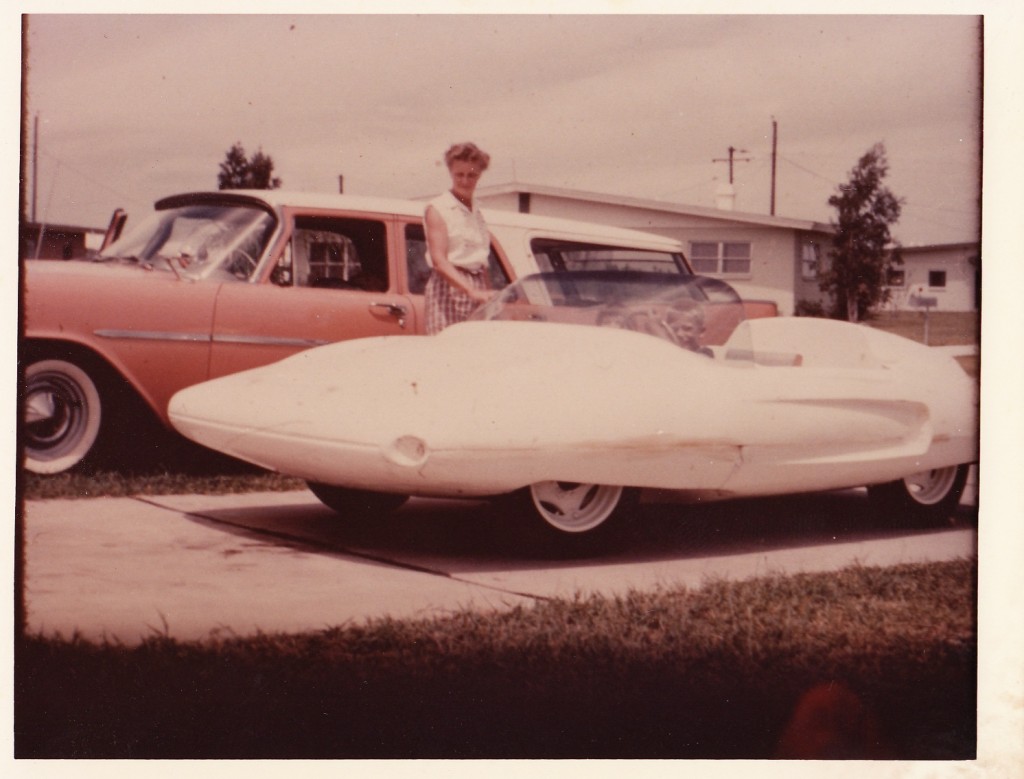 Here the prototype of the Shark Roadster is Being Tested By The Families Involved. The prototype was built in the summer of 1961. The production roadster wouldn’t be ready until early 1964.

Although I have had a copy and associated picture of the article that is from today’s story for over 30 years, I never thought I would find any original photos from the press releases and the Shark.  Well I was right.  I never did find the photos.  Bob and Glenn did – on eBay about a week ago.

So…in honor of their exciting find, I thought I would share this long-lost article and never seen before picture with you today.  This is another “Renault” based fiberglass sports car, and the story how I found 3 lug cosmic rally wheels for both my Renault-based Shark roadsters merits a story in itself – but not today.

Off we go….back in our time machine to 1965 when the “Shark Roadster” was about to hit the streets.  And “hats-off” to both Bob Cunningham and Glenn Brummer for their tenacity, friendship, and one exciting “find.”

Church steeples and sporty-looking cars do not have much in common, except at Glenn Industries, a St. Petersburg firm which used fiberglass to manufacture them, as well as filter screens, chain chards, and phosphate mining valves.  The 25 foot high church steeple was completed by Glenn Industries the other day and picked up by Barker Manufacturing Company employee for delivery at the church site.

The steeple is made entirely of fiberglass on a mold constructed at Glenn Industries, 4523, 35th Street North, under the direct supervision of Glenn W. Gums, president.  But more intriguing than the steeple are the sporty looking car bodies Gums and his employees can make to provide any car with an entirely new look.

Gums’ product is the result of many years of experimenting.  He gives much of the credit for the idea of the molded fiberglass bodies for cars to the late Henry B. Covington, a designer and vice president of Pardoll Associates, Inc., also of St. Petersburg, at the time of his death May 6th, 1962

A native of North Carolina, Covington had been a designer with Gruen and Elgin watch companies before coming to this city from Cincinnati to join the Crest Leather Manufacturing Company.  Later he left Crest to join Pardoll.  Covington and Gums become associated in the manufacture of the molded-body cars which cannot rust, rot or crack and eliminate the fender – bender type of collision. 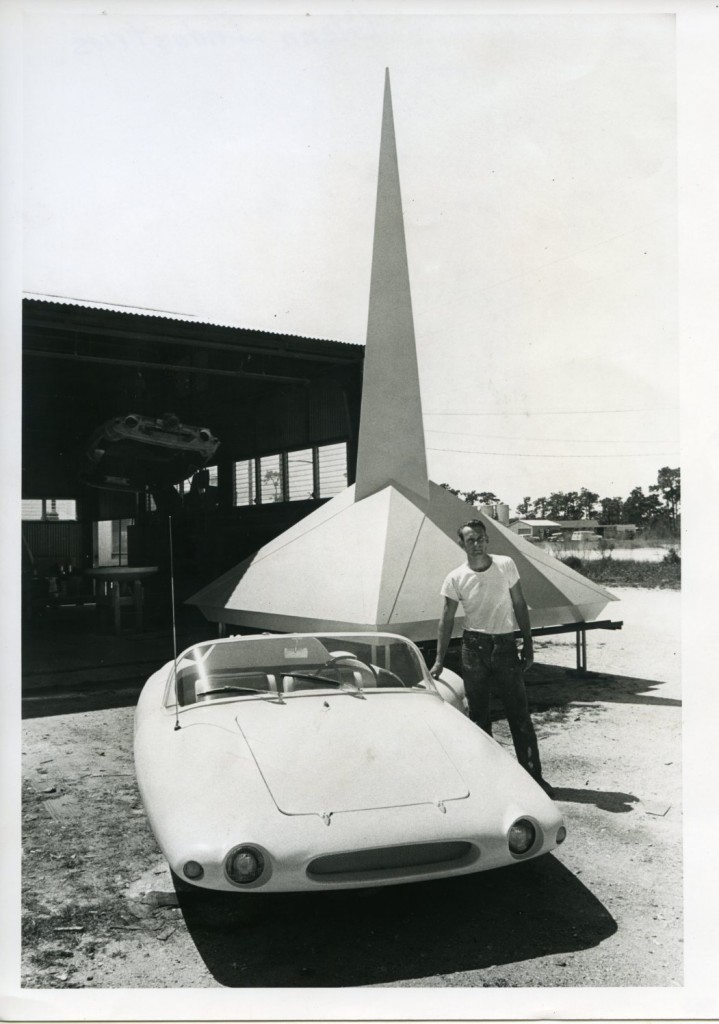 Anyone Notice The Shark “Mold” Hanging From The Building At Back? Jean Poirier Did (I didn’t….).

After Covington’s death, Bums continued experiments with molding the bodies and through refinements, has produced a standardized molded body that will fit the chassis of a Volkswagen, Renault, Fiat, or other cars of that type.  The molded body also includes a fastback to give the car an even more appealing appearance that makes it the center of attention wherever it is seen.

Bums, a native of Merrill, Wisconsin, has been in plastics for 20 years, first in his native state and, for the last eight years, in St. Petersburg.  He was associated with his brothers, Gerald and Robert, in both Merrill and Rib Lake, Wisconsin.  The brothers owned or controlled EverLite Laminates, Lakesite Plastic, and Glenco Plastics Company in Wisconsin, and since coming to Florida, Gums has been associated with Pli-Glas Products Gompany, Inc., and now Glenn Industries.

Gums takes an old Volkswagen, Renault, or Fiat, strips off the body and winds up with nothing more than the chassis.  The engine is overhauled, brakes relined, and everything possible to bring the chassis and engine back to its original state. 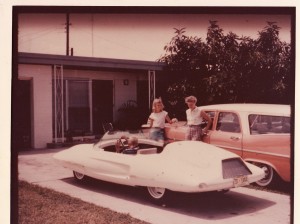 Another picture of the Shark Roadster prototype – circa 1961.

“The chassis never wears out,” Gums says, “and you can build on that easily.”  After the chassis is renewed, the body of the car is molded and fitted into place.  Presto!  It looks like a new car.  But its body is 10 times stronger than steel.  The molded fiberglass can take a lot of beating.

To prove the point, Gums will demonstrate by striking the body with a hammer and leave nothing more than a rust mark from the head of the hammer, to show that the blow was struck.  Gums has made seven of the molded bodies for various people since he came up with a satisfactory mold.

Two of them are in St. Petersburg.  There is one owned by a Clearwater resident, and one by a resident of Tampa.  The other two are in Chicago and Bakersfield California.  He has the seventh.  The cost for a sporty looking molded body on an old chassis?  About $600, possibly a little less.  It costs approximately $175 to prepare the chassis and engine for the mold.  The molded body costs approximately $400.  It takes about three weeks from start to finish of the job.  There is no limit to the use of fiberglass, Gums claims.

“We have made 12 x 12 x 3 screen filters for Tampa Electric, Company” he said, “and we are experimenting now with plane wing tanks.  We have made caskets that will not rot, crack, or rust.  We make boxes for tools, the ‘buckets’ for snorkels, chain guards for Florida Power Corporation, and many other items.”  Gums, now 42, attended Plastic Technical Institute in Chicago.  He graduated in 1945.  The president of Glenn Industries is a tobacco-chewing workman, who shoulders a share of each work day’s load.  He isn’t the executive type; he’s more the workman.

I started my research on the roadster version of the Shark back in 1980 and found two existing roadsters then – none since.  I interviewed Glenn Gums, Sr., many times back then, and still visit his son, Glenn Jr., of St. Petersburg, Florida.

There has not been even a wisp of mention that any other “Shark Roadsters” survived.  Five fully running roadsters were built, and I have pictures of each. One of these may have been the prototype – rebodied – so either 5 Shark roadsters were built plus a prototype giving a total of 6 separate cars – or the chassis of the prototype was repurposed bringing the total built for production to five.

In the article, Gums mentions one of the cars being in Bakersfield, California.  He was referring to the coupe that Les Weber had.  He was also referring to the original prototype being in “St. Petersburg,” so this is how the number “5” came to be for the Shark Roadsters (from the “7” he mentioned in the article).  The actual number of coupes built were two prototypes (since destroyed) and 6 coupe bodies.  Of these six production coupe bodies, at least two were fully built into cars, and the status of the remaining 4 coupe bodies is unknown.

In the article above, Glenn mentioned a “car in Chicago”  That was a Shark Roadster, and it has been found and still exists – more about that car in a future story here at Forgotten Fiberglass. 🙂

All Shark Roadsters were initially Renault based cars, but one was later converted to a Corvair drivetrain – probably influenced by the wonderful “build” by Les Weber and his coupe in Sacramento, California which utilized a supercharged Corvair / Corsa engine.  Only one coupe was built on Henry Covington’s originally intended platform – a 356 Porsche, and that’s the one built and customized by Gene Winfield – the one we recently shared on the field at the Milwaukee Masterpiece Concours d’ Elegance.

So….three or four missing Shark Roadsters exist out there gang – and four coupe bodies remain unaccounted.  Find them if you can – I’ll be cheering you all the way.  After 30+ years, I’m ready to relinquish the reins and my title of “President of the Tiburon (Shark) Coupe and Roadster Club.”  😉 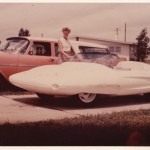 Here the prototype of the Shark Roadster is Being Tested By All. The was built in the summer of 1961. The production roadster wouldn’t be ready until early 1964. 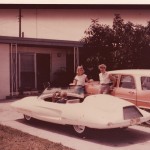 Another picture of the Shark Roadster prototype – circa 1961. 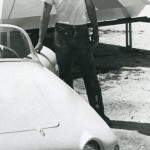 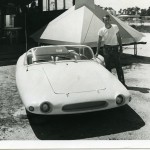 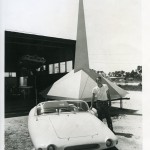 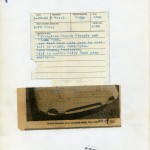 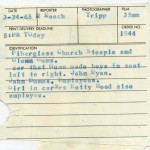 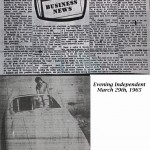 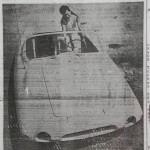 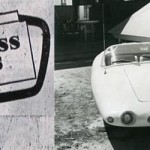