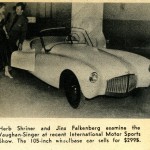 This Photo of the Vaughan Singer Glasspar Special appeared in the August 1952 Issue of MotorSport. It Says, “Herb Shriner and Jinx Falkenberg Examine the Vaughan-Singer at Recent International Motor Sports Show. The 105″ Wheelbase Car Sells for $2995. (note: wb dimensions should have been 100”)

I feel fortunate to be blessed with so many good friends – even outside of our own fiberglass fanatics (since you are reading this….each one of you is one of these..).

In the past few years I have become good friends with two historians from the Singer Club of North America – Peter McKercher and Phillip Avis.  Both have offered to write about the fiberglass specials of the 1950’s built on Singer chassis’.

Thanks to both Phillip Avis and Peter McKercher for supporting us in this way.

Today’s article is about a Singer Special built / sponsored by William Vaughan of Vaughan Motors in New York City.  This is a car we’ve mentioned before, but never in detail.  I had also discussed this car with Bill Tritt back around 2007, and I shared my notes with Peter for his article today.

Let’s turn the story over to Peter and learn a bit more about this interesting Glasspar G2 bodied Singer Special.

From the Desk of Peter McKercher

One of the more intriguing stories of Singer’s foray into the world of fiberglass was the mating of the Glasspar G2 body to a Singer Roadster chassis, badged simply as the Vaughan Singer. What makes it so interesting is the nature of the man who commissioned it, namely Bill Vaughan.

Unfortunately, any concrete information we have on the Vaughan Singer is extremely sparse.  Early in 1952, Bill Vaughan became aware of Bill Tritt’s Glasspar G2 project and felt it would be a good fit for the Singer Roadster. He contacted Tritt and had him ship a G2 body by train to New York City from Costa Mesa.

According to Tritt, the car was brought up to a 2nd or 3rdfloor garage loft by service elevator, where he and a welder adapted the chassis to accept the Glasspar body. One assumes that the modifications involved lengthening the Roadster’s 91” wheelbase to accommodate the Glasspars’s 102” dimension, although no details are available with respect to what was actually done. 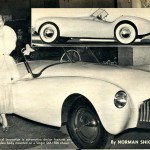 This “Glamour Shot” Appears in the the July 1952 Issue of Auto Sport Review. It Says, “The Radical Innovation in Automotive Design Features an all Fiberglass Body Mounted on a Singer SM-1500 Chassis.”

The assembled car was lowered to ground level, once again using the service elevator, and pushed by Vaughan and one of his employees to the Grand Central Palace. This was where the car was to be displayed at the First Annual International Motor Sports Show. According to Tritt, the car did not run as it was “not wired and a few other small things”.

He added that Vaughan “had hurriedly printed pamphlets that suggested the excellence of the car including the Singer components”.  The purchase price for the car was advertised as $2995.

The car’s appearance seemed to be well received.  In the July 1952 edition of Autosport Review, Norman Shigon wrote:

Essentially, that is the extent of what is known for certain about the one and only Vaughan Singer Roadster ever created. However, even though there was but one built, and it may or may not have ever actually run, a lot was said about it. Perhaps that also said a lot about its creator Bill Vaughan.

Taking a step back for a moment, little more is known about Vaughan than about his Vaughan Singer.  The 41 year old (in 1952) gave up an acting career, after featuring in 55 Broadway productions, to get into the car business. According to a recent interview with Monroe Gretske, Vaughan’s business partner, he was not a man of substantial means, but simply a used car salesman with a love of sports cars, a service centre and a showroom in Manhattan.

While he was sufficiently glib to garner sole distribution rights for Singers in the United States, he was horribly disorganized as a manager and businessman.  This weakness, Gretske said, nearly cost him his distributorship with Singer, when he failed to fulfill a large order from a customer in California. (It was this event, however, that led Gretske to secure the Vaughan Singer Motors franchise to service the 11 Western States). 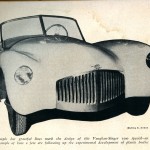 This is the Third and Final Photo / Reference I’ve Found Published On The Vaughan-Singer Glasspar. It Appears In The 1953 Edition of the Trend Book “Dream Cars.”

Although an ineffective manager, Vaughan appeared to be a superior tactician and a visionary who had no difficulty convincing an eager press to report on his sometimes hyperbolic musings.  In his interview with Shigon, he explained that the car on exhibit had been driven 3,000 miles across the country from Costa Mesa, California as a test to determine how well it would withstand road service.

The car, of course, had actually travelled by rail. He elaborated on his plans to open manufacturing facilities for the licensed production of the G2 body shell in New York, California andFlorida. Rubber components necessary for the assembly of the car would be supplied by Anchor Rubber Products of Cleveland.

“the exceptional performance of the new plastic bodied car was recently demonstrated by Bill Vaughan in a trial run on the track at Bridgehampton. With a special differential, Vaughan was clocked at 102 miles per hour, with cornering speeds as high as 85 miles per hour”.

In the August ’52 issue of Motorsport Magazine, Vaughan received further positive coverage on the car and his plans. In an article discussing the promise of fiberglass in the construction of car bodies, Bill Schroeder, Associate Editor, wrote:

“Bill Vaughan of Vaughan Motors, New York City, has probably gone the greatest distance along the plastics road with cars…Vaughan’s three body factories on the West Coast, in Massachusetts and Florida are currently producing plastic bodies for the 105-inch (Sic) wheelbase Singer”.

In retrospect, there is little evidence that these plants were any more than part of Vaughan’s grand vision. In fact, Tritt confirmed that the mould for the body shell was never released to Vaughan to begin production. 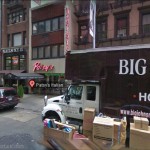 Here’s A Current Photo Of The Location Of Vaughan Motors in New York City in 1952. Patsy’s Restaurant Is Now In This Location and It’s 3 Stories Tall – Just As Bill Tritt Reported It Was Back In 1952. Could A Missing Vaughan Singer Glasspar Be Lurking On A Dusty Unused Third Floor???

Interestingly, Vaughan’s grand vision included a triumvirate of sports cars that he wanted to deliver to the American public. In the same article, Schroeder wrote:

“Not content with a single plastic body mounted on a 105-inch (Sic) wheelbase Singer that was displayed at the recent International Motor Sport Show in New York, he has been instrumental in creating a complete line of models that includes sports and strictly-competition cars”.

Schroeder went on to describe in detail a competition car with a magnesium block engine developing 129 horsepower in tuned version, mounted in a special chrome-moly steel tubular  91-inch wheelbase chassis, with either transverse or torsion bar springing. An untuned version of the car would use a box frame and develop 100 horsepower. Vaughan also claimed:

“A completely new body, with distinctive Continental flavor, is in the prototype stage in Italy and will shortly be available here in fiberglass”.

Despite all of his grandplans, nothing seems to have transpired with the Vaughan Singer beyond its appearance at the International Motor Sport Show and a trial run at Bridgehampton.  Perhaps he couldn’t raise sufficient funds to proceed with the manufacturing facilities he envisioned.

Maybe he determined that it was simply too much effort to make the necessary chassis modifications to adapt the Singer chassis to the G2 body. In the absence of any further documentation, we’ll never know. Certainly Bill Tritt offered no reason on his part for suspending the project.

Like all of the Glasspars, it was a pretty car and I’m sure reasonably finished for the one and only show in which it appeared.  One can only hope that it remains stored somewhere on the East Coast waiting to be completed and put on the road once and for all.

Thanks again to Peter McKercher, Singer Historian, for his efforts in writing this article and sharing it with us.

This “Glamour Shot” Appears in the the July 1952 Issue of Auto Sport Review. It Says, “The Radical Innovation in Automotive Design Features an all Fiberglass Body Mounted on a Singer SM-1500 Chassis.”

This Photo of the Vaughan Singer Glasspar Special appeared in the August 1952 Issue of MotorSport. It Says, “Herb Shringer and Jinx Falkenberg Examine the Vaughan-Singer at Recent International Motor Sports Show. The 105″ Wheelbase Car Sells for $2995. (note: wb dimensions should have been 100”)

This is the Third and Final Photo / Reference I’ve Found Published On The Vaughan-Singer Glasspar. It Appears In The 1953 Edition of the Trend Book “Dream Cars.”

Here’s A Current Photo Of The Location Of Vaughan Motors in New York City in 1952. Patsy’s Restaurant Is Now In This Location and It’s 3 Stories Tall – Just As Bill Tritt Reported It Was Back In 1952. Could A Missing Vaughan Singer Glasspar Be Lurking On A Dusty Unused Third Floor??? 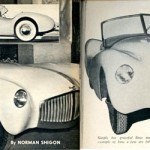