JR’s Speed Shop is Creating a Fantastic American Special Down in Venice, Florida

Tom Kubinec and I have known each other for nearly ten years.  Our friendship started when he bought his Almquist Sabre out of Morehead, Kentucky via eBay around the end of 2011.  He got it home to Syracuse, New York in fairly quick order and started to work on it during his spare time.  The body had been modified in a very appealing way as you’ll see in the photos below.  An extra piece of fiberglass was fabbed in to the cove area just behind the front wheel.  It really gives the car a distinctive and beautiful look.  Check out the photos below from Tom’s first year of ownership in 2012 and 2013: 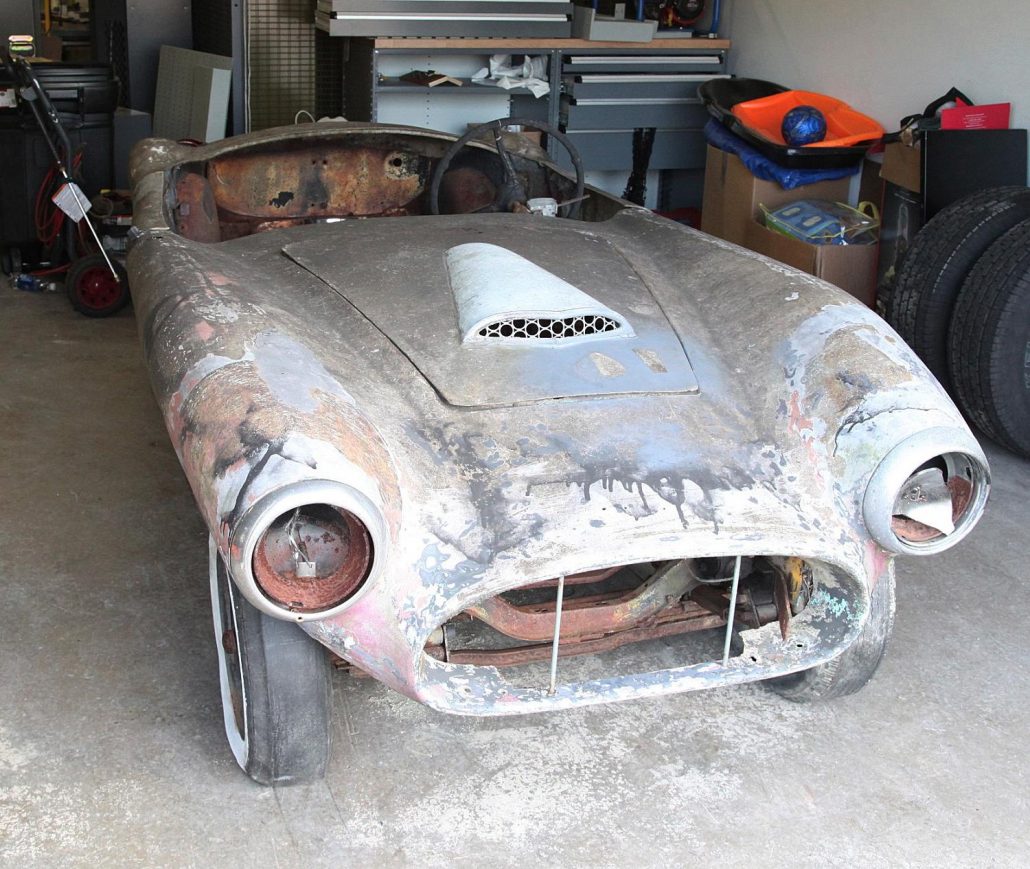 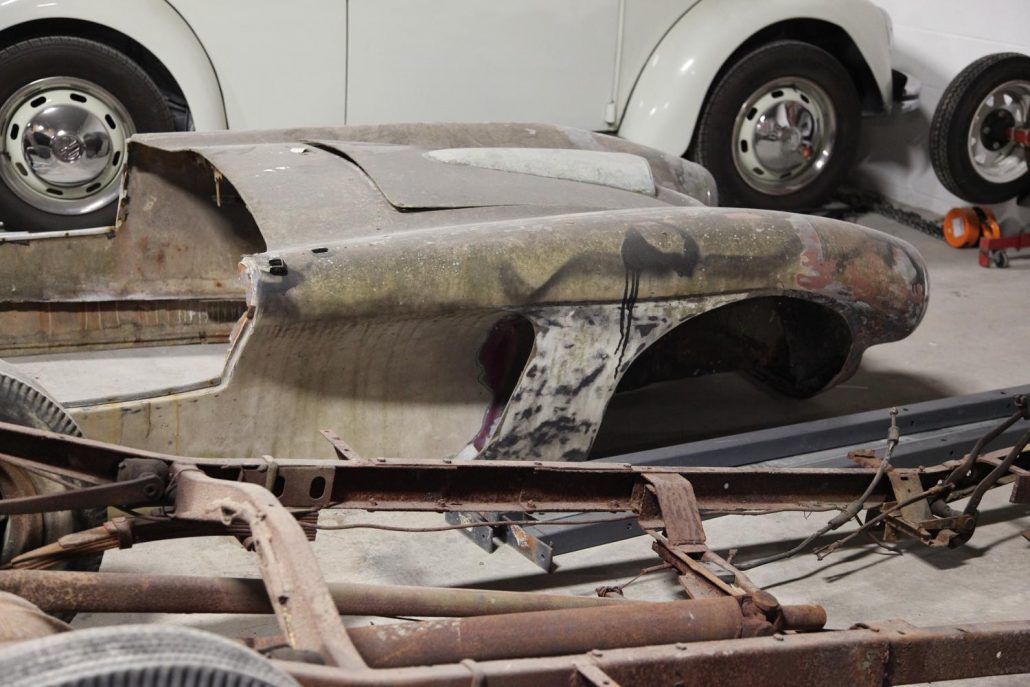 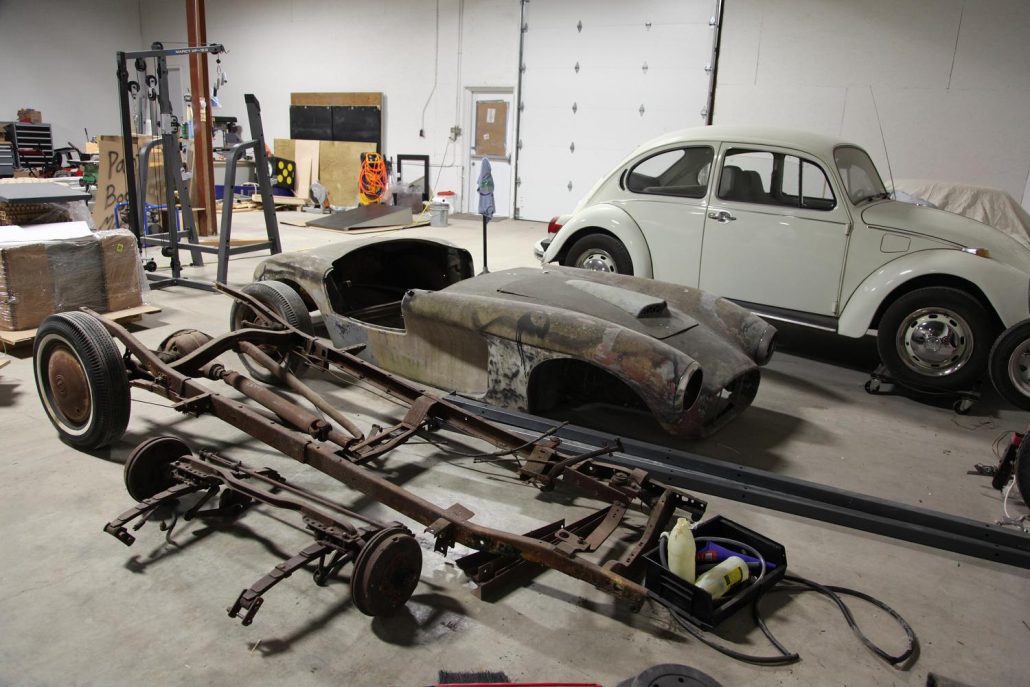 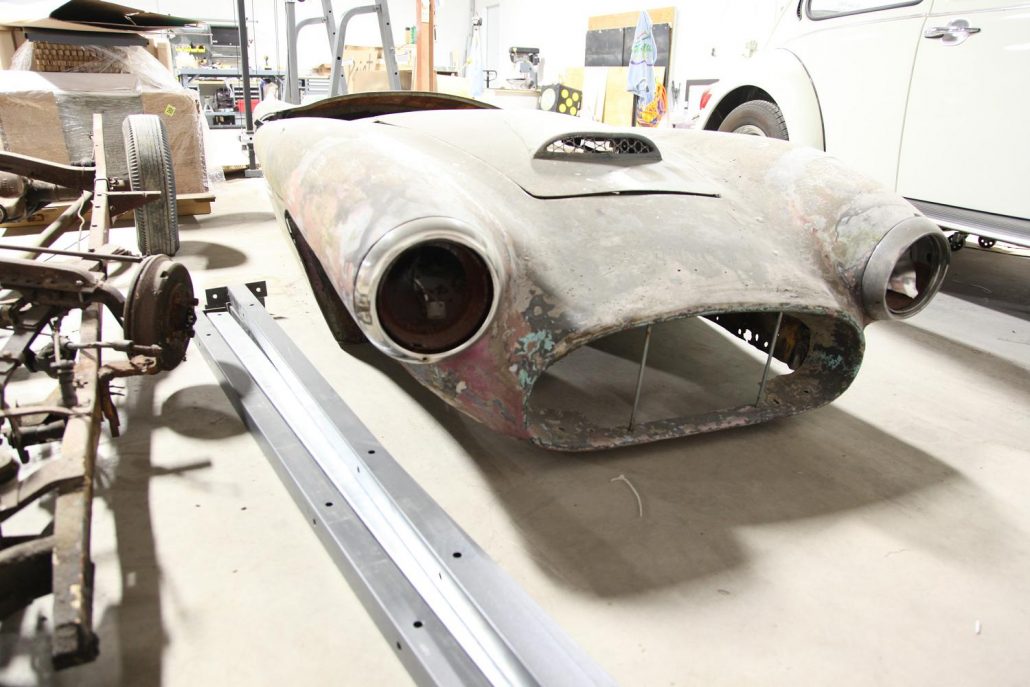 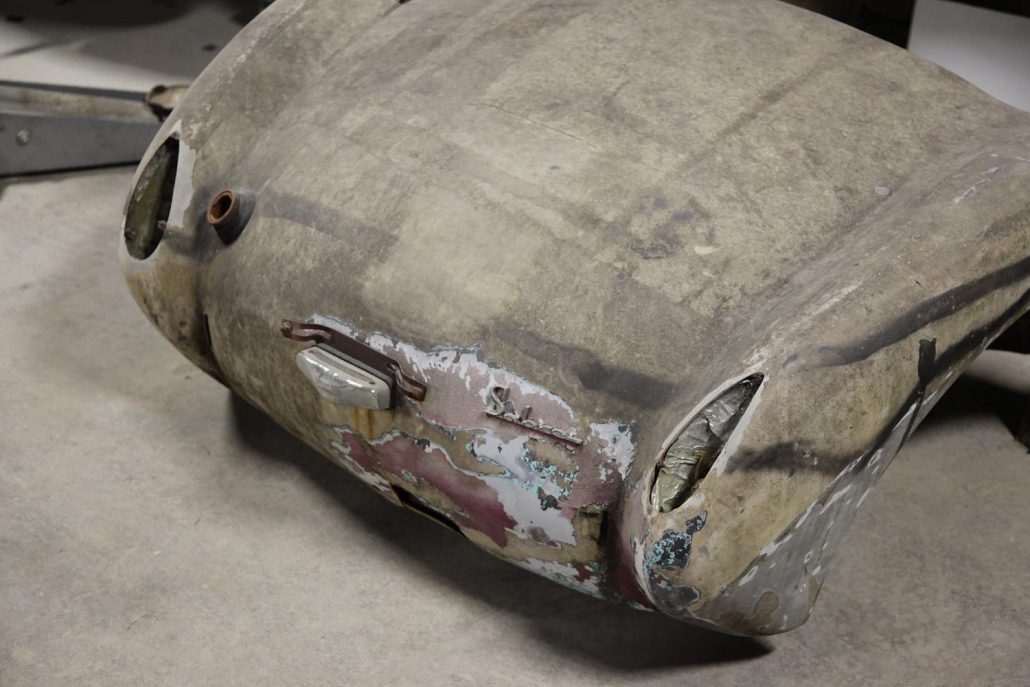 One of our good friends was responsible for the design of the Almquist Sabre – Clark Mitchell.  Clark was friends with Harry Heim and put pencil to paper in 1955 with Harry Heim and designed the Clearfield Sabre.   Harry Heim took his company about a year after it started to Ed Almquist where he continued producing the Sabre and other models in various sizes.

Back in 2013 I showed Tom Kubinec’s Sabre to Clark Mitchel and pointed out to him the modifications made to the body.  His reply appears below. 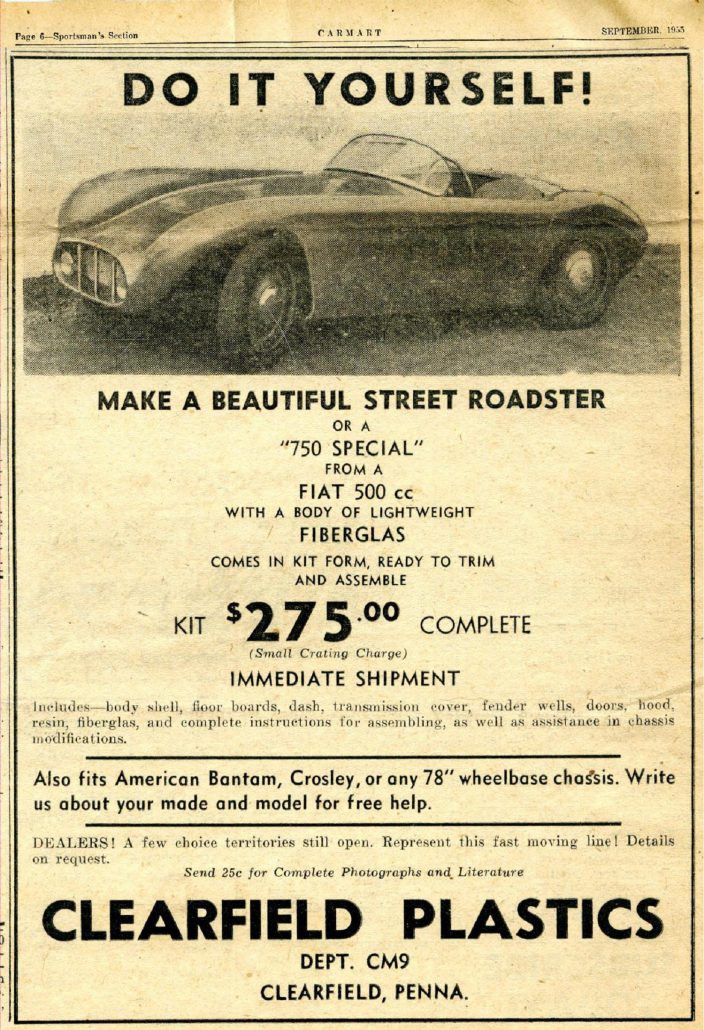 This is a very interesting iteration of this SABRE . . . . Harry Heim pointed out to me and to Roger Adam (lifelong friend who helped built the first Sabre), that once someone owns one of our bodies, they can do almost anything with it.  If they plan to use it on the street, state and federal laws will govern their modifications, primarily for safety purposes.

In terms of preparing the coachwork for racing, safety rules of the particular track, regulations re weight, height, width, length and other stated requirements will effect the ‘legality’ of the completed vehicle to be eligible to race.  Not all tracks have the same regs. . . .

Heim further explained to our primarily teen age male group, that, as with any vehicle that a person owns, he or she has the right to customize the coachwork.  The person or persons who were/are re-configuring Tom Kubinec’s Sabre had, in my opinion,  some very good ideas in terms of adding their personal signature.

Their modifications to our full scaled/molded in polyplastic body/shell compliments/integrates well with the aerodynamic shape that we  had originally drawn/clay modeled.  Our body was intended as a ‘one-off’ for a racing buddy of Harry’s.

His friend commissioned him to design a body shape that would allow maximum air for brake cooling, to travel past the frontal area bodywork, pass over the front drum brakes, travel to the rear wheel area in a vortex, and enter through the rear wheel spokes, and also exit via the sculptured indentation behind the rear wheel that functioned as an escape passage for air that helped to cool the rear brakes.

When we completed our first body on a Stanguellini chassis as a replacement for a damaged body, Harry suggested that we make a few more bodies for ourselves (and for interested friends and associates).  Then mount them on FIAT Topolino chassis and license them for the street.  Perhaps, later on, we could run them in SCCA events.

Meanwhile, as part of Clearfield Plastics (Harry’s Company), Harry was turning out fiberglass tenders for the U.S. Navy, burial vaults, rear doors for trailers that carried frozen foods, and myriad other products for individuals and for industry.

When we attended sports car events, our little cars caused much interest. People requested a larger body that would fit a larger, more available chassis .  Hence, Harry expanded the tiny concept to a size that would fit most domestic mid-sized automobile frames.   Both of these body styles were the major sports car coachwork that Harry Heim and Associates produced, even after he moved his factory to Milford, PA, which is where Ed Almquist developed, produced and and marketed automotive performance equipment.

Tom and I stayed in contact through the next several years and in 2018 Tom and I talked about bringing his Almquist down to Undiscovered Classics and having our teams complete the restoration.  The car is now at JR’s Speed Shop in Venice, Florida and the work they are doing will take this car to a completely new level.  Below you can see the car when it arrived in 2019 ready for work to begin: 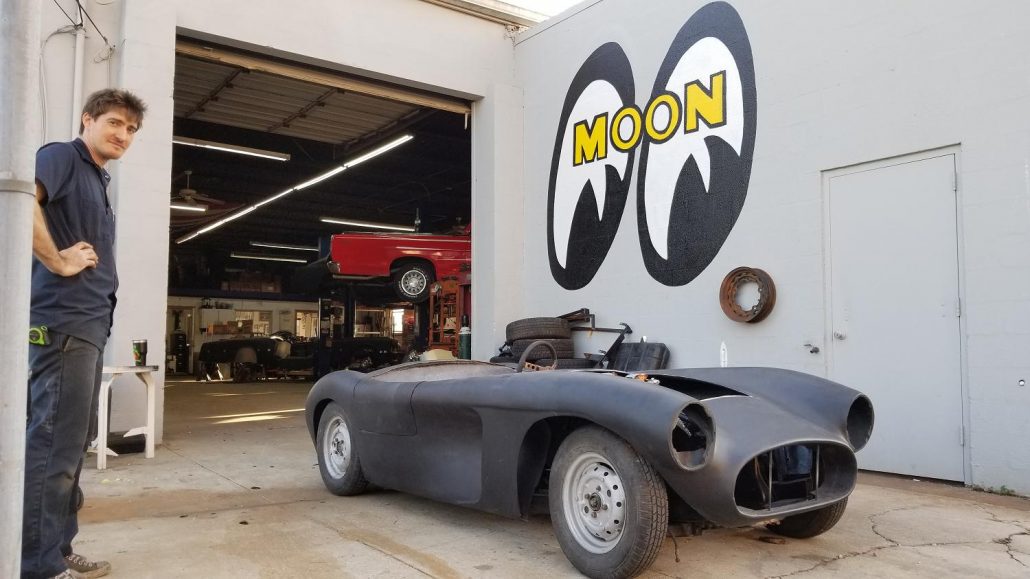 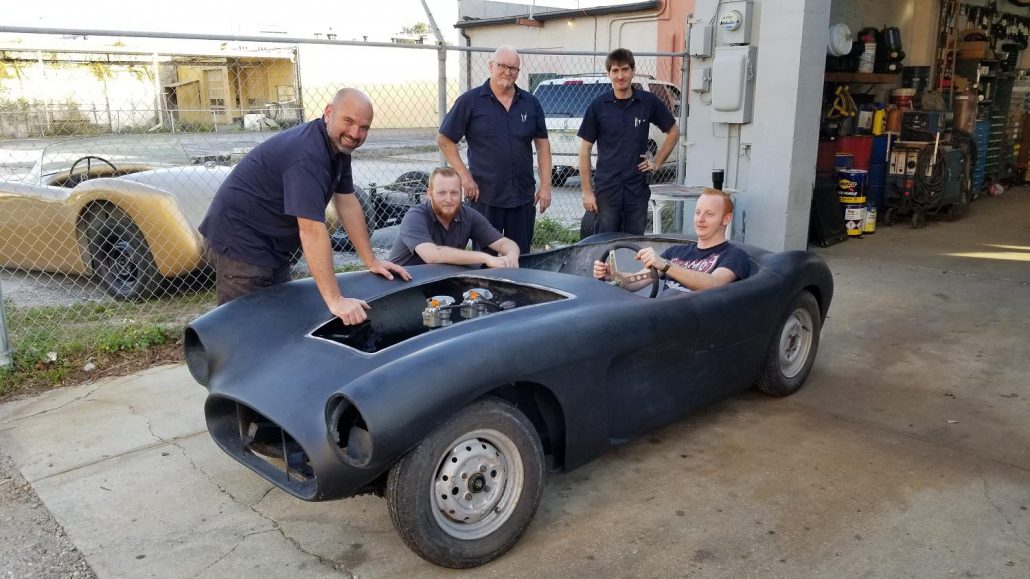 John Pascucci and Tom Kubinec wanted to rethink the restoration plans for the car and they did so from the bottom up.  In the photos below you’ll see the Almquist body on the newly created modular fixture table.  Why was that needed?  Because Tom and John wanted a Kurtis-style chassis with torsion bar suspension under the car.  JR’s Speed Shop was the right place for the job. 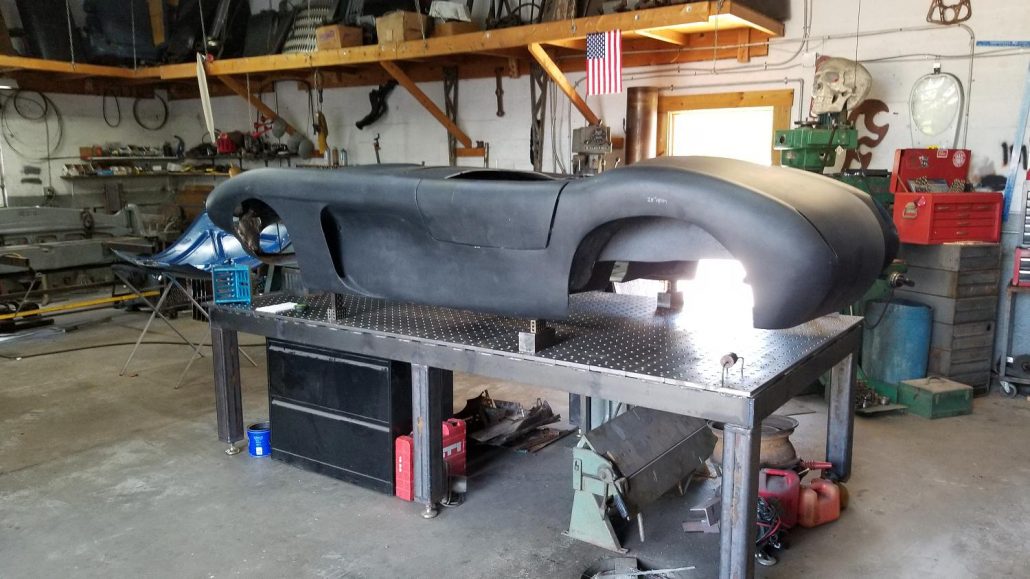 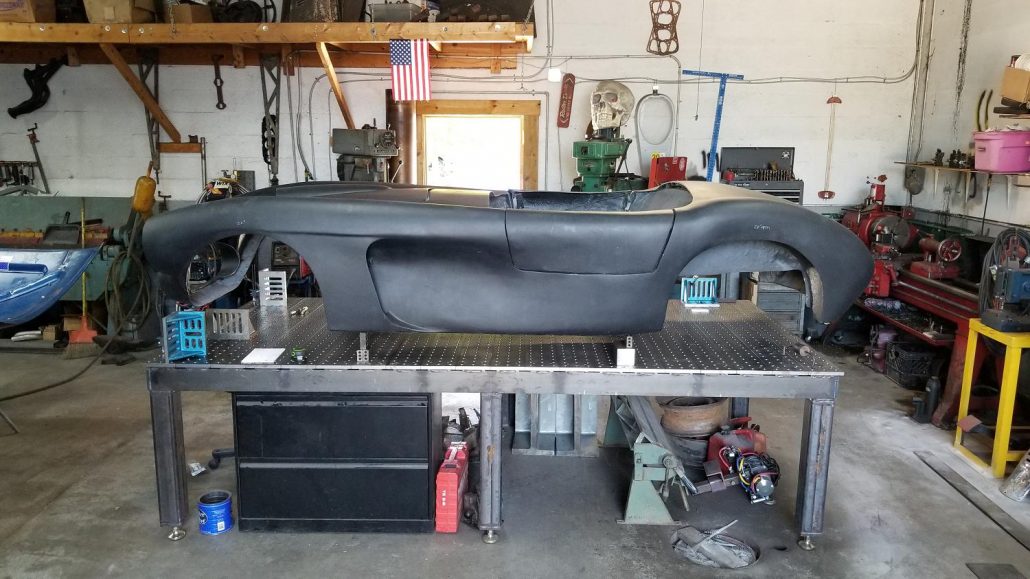 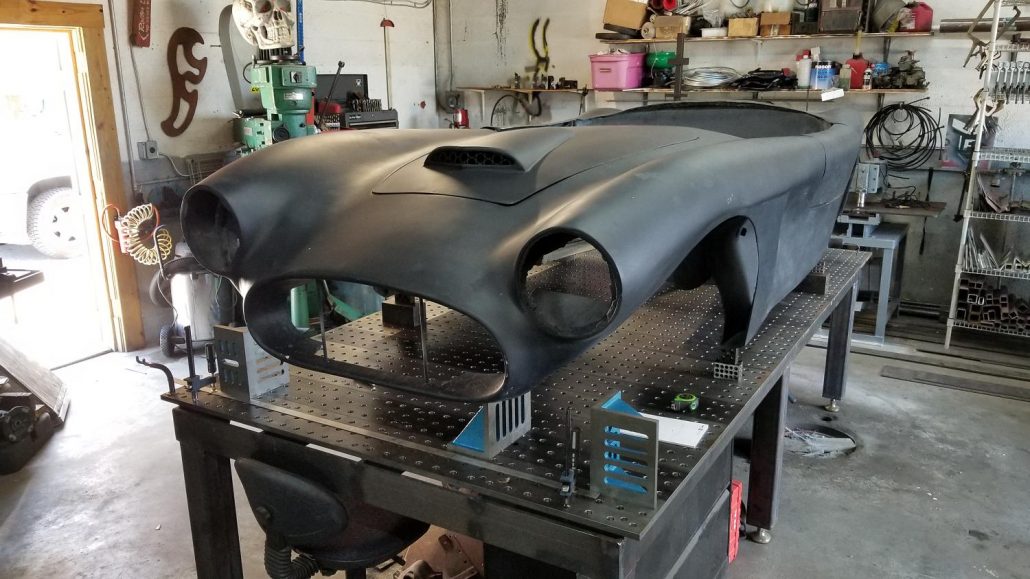 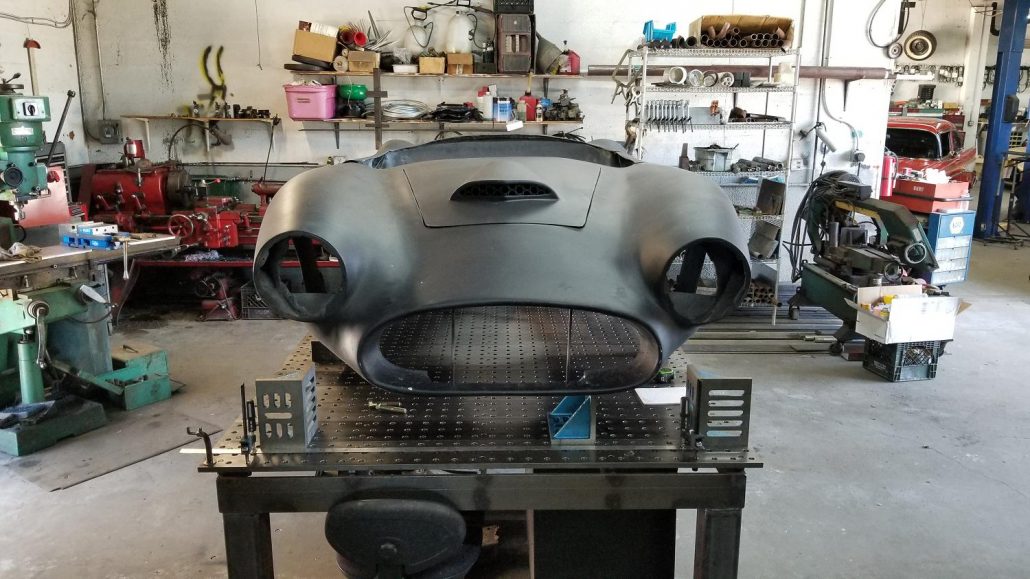 The chassis started taking shape earlier this year and I got my first chance to see the custom-built chassis and progress on the body for the first time last month.  The engine in the chassis in the photos below is not the engine planned.  The engine that is built and ready to go is a Ford V8-60.  You’ll love it when you see it in the future stories.  For now, here are photos for your review: 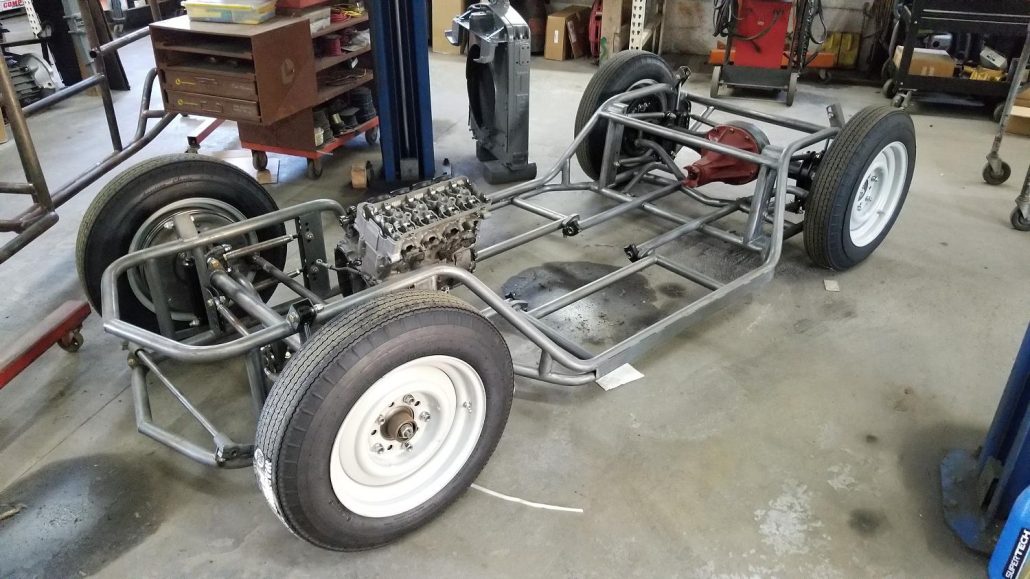 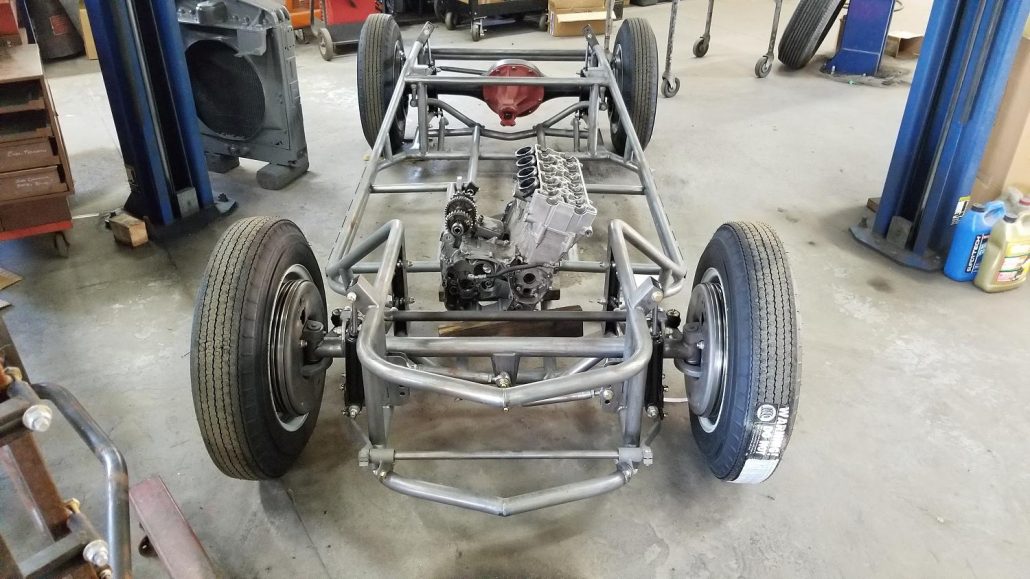 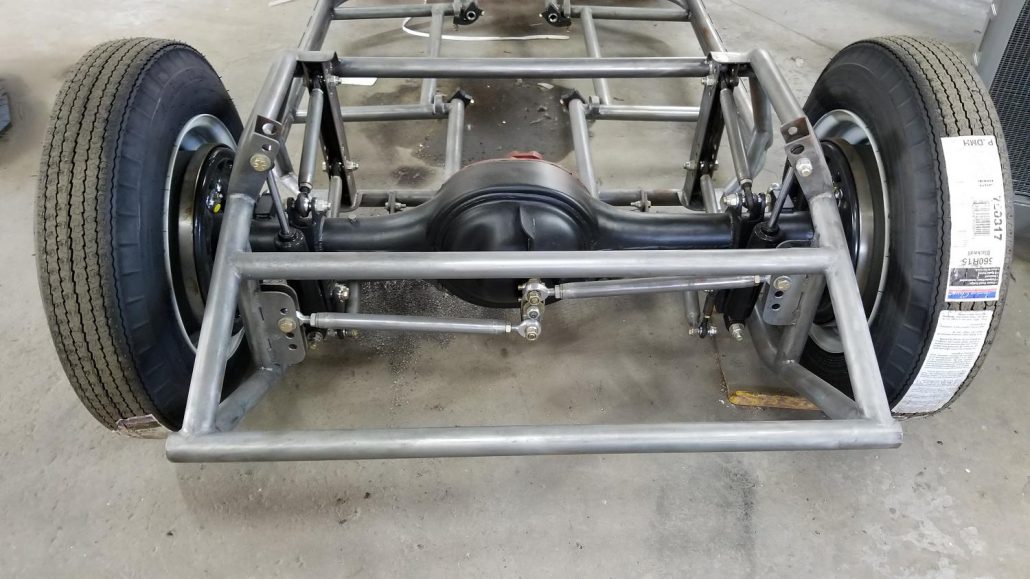 All fiberglass work on Kubinec’s Almquist is being steered by Dean Meglio.  Dean’s in the first photo below and in the remaining photos you can check out the progress them are making.  Great job Dean – the body is looking excellent :-: 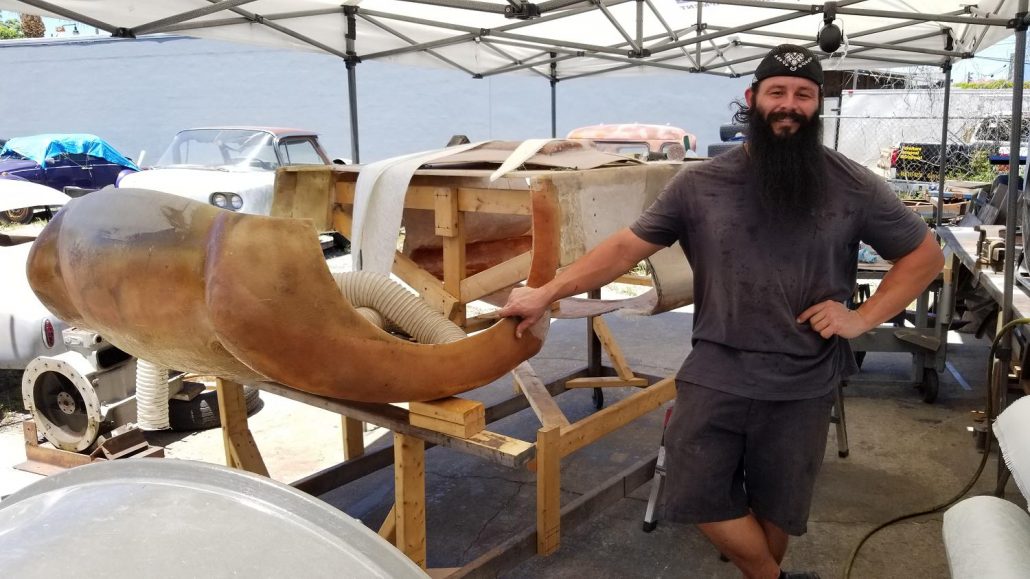 Fiberglass Chief at JR’s Speed Shop is Dean Meglio.  Dean is a recent addition to JR’s Team and brings expertise to bear not just on fiberglass but with upholstery, fabrication, mechanical skill and other areas too.  Great to have you on board Dean and we wish you continued success. 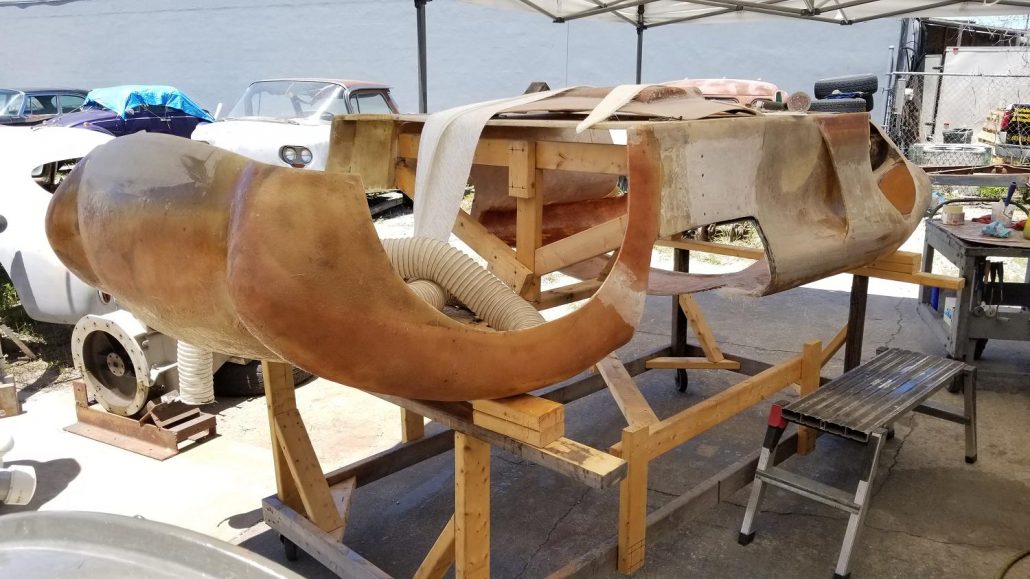 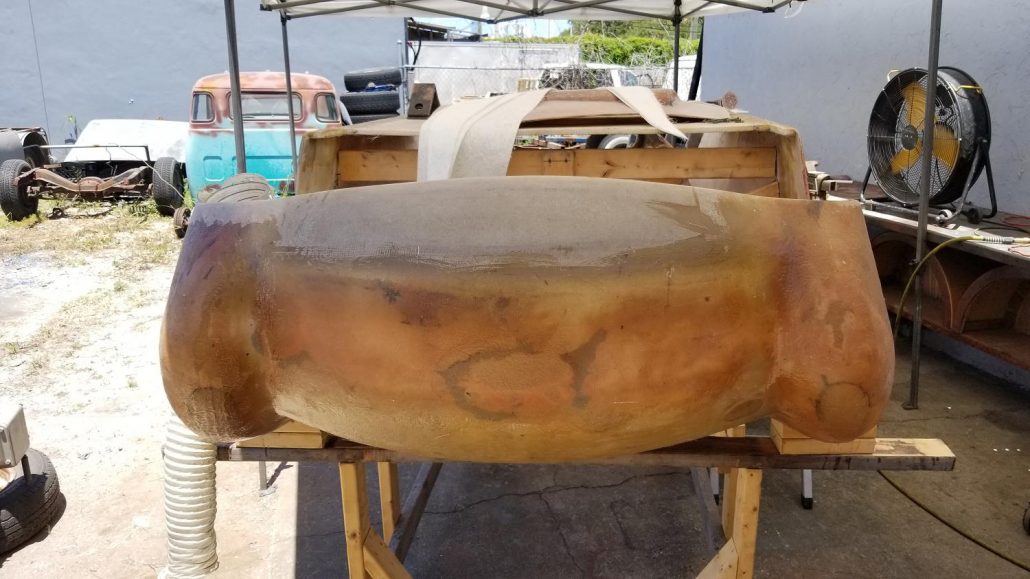 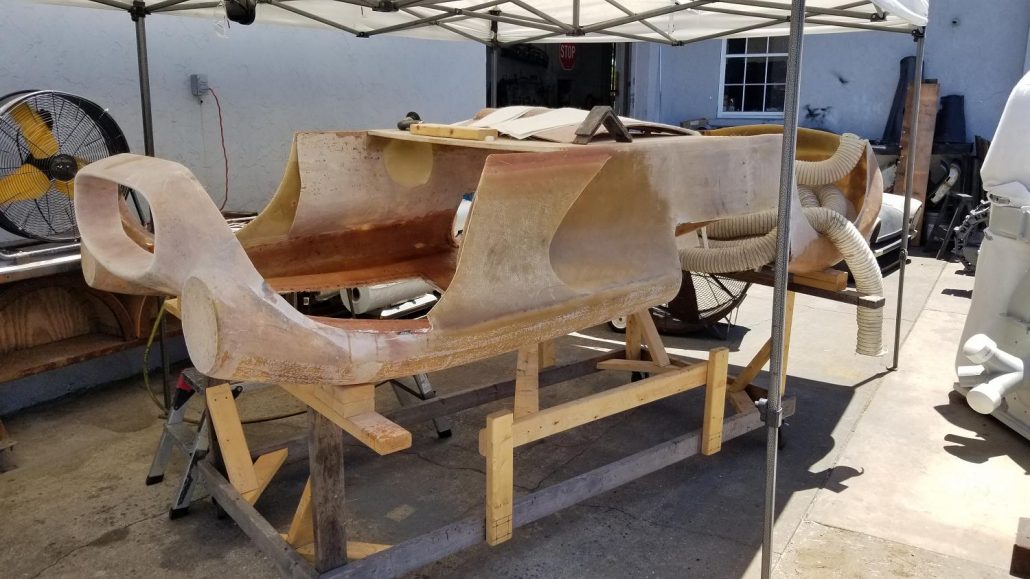 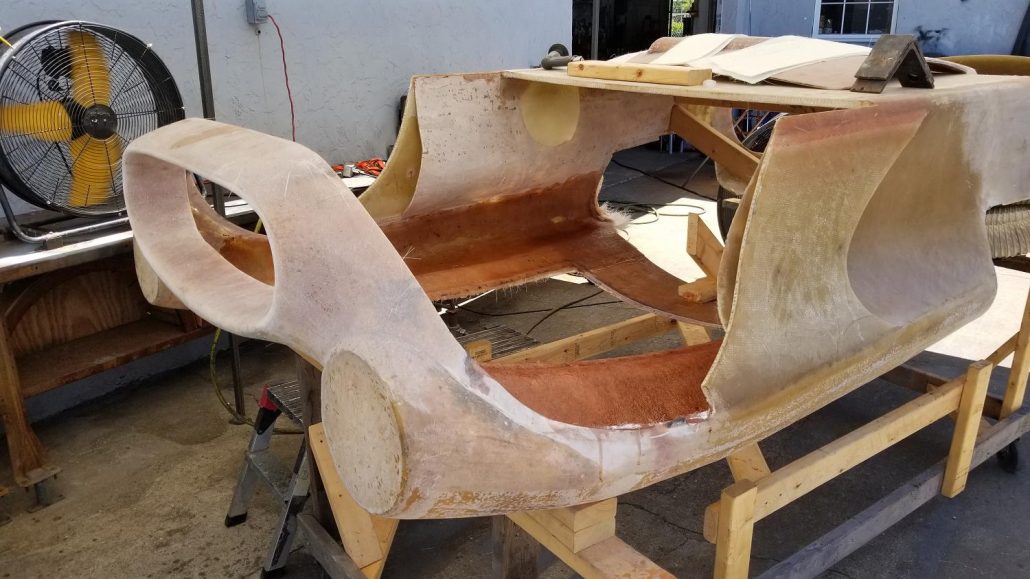 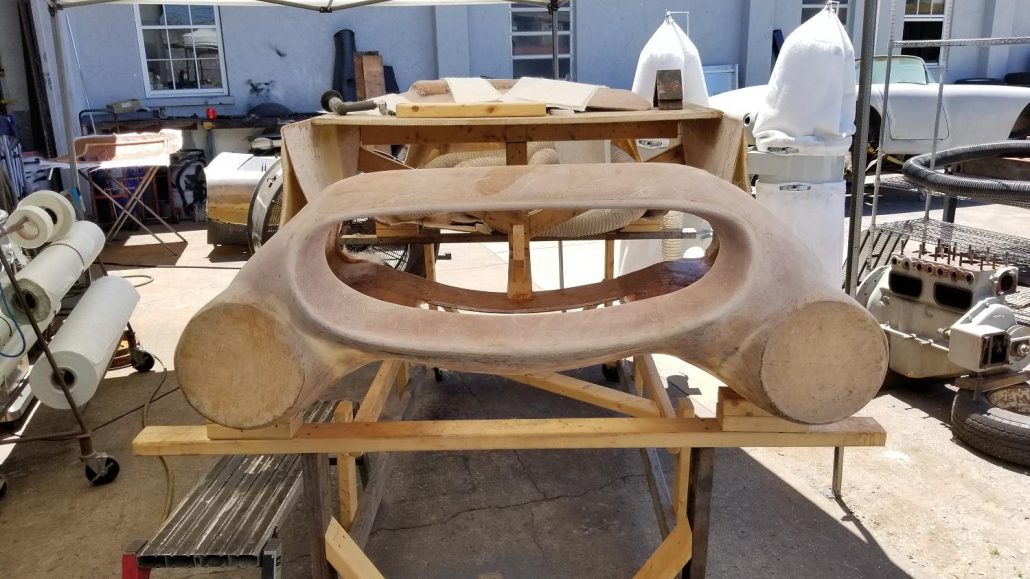 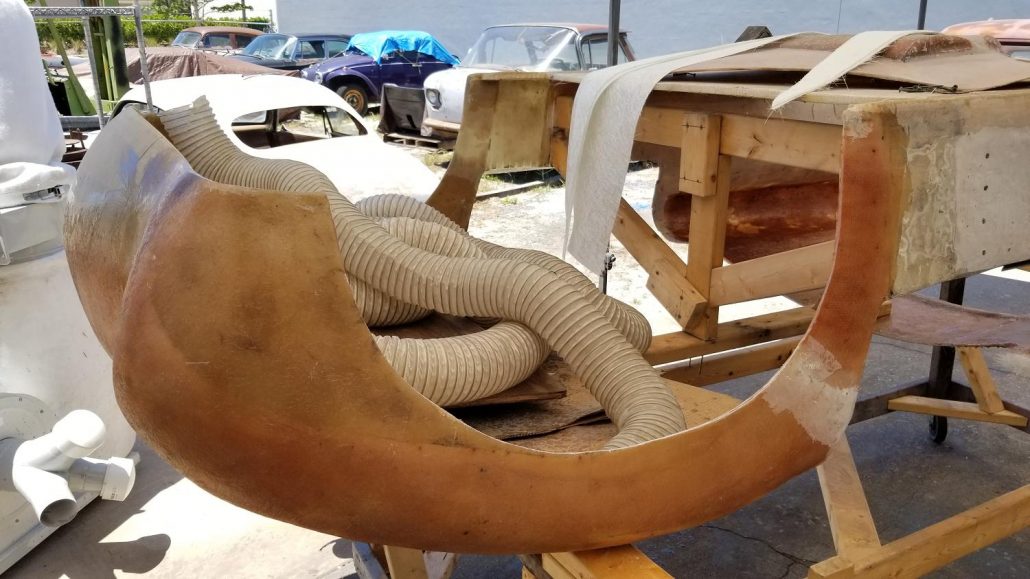 For those of you interested in the chassis that JR’s Speed Shop has built, you can learn more via a Hemmings article that appeared earlier this year:

JR’s team is pushing forward on restoring and building several cars simultaneously and it’s great to see such progress being made on each of these cars.  We hope to have another update on Tom Kubinec’s Almquist Sabre soon with some photos and another story.  And I’m looking forward to our first test drive at JR’s in the Sabre.  Will be fun in every way.