In one of our last stories back in early May, Rick D’Louhy and I were prepping for our trip to participate in the Import and Kit Nationals held yearly in Carlisle, Pennsylvania.  Once again, we were looking forward to being a part of the show’s activities, and we were most pleased that Merrill Powell – vice-president of Victress Manufacturing in the ‘50s – was going to be there with us too. 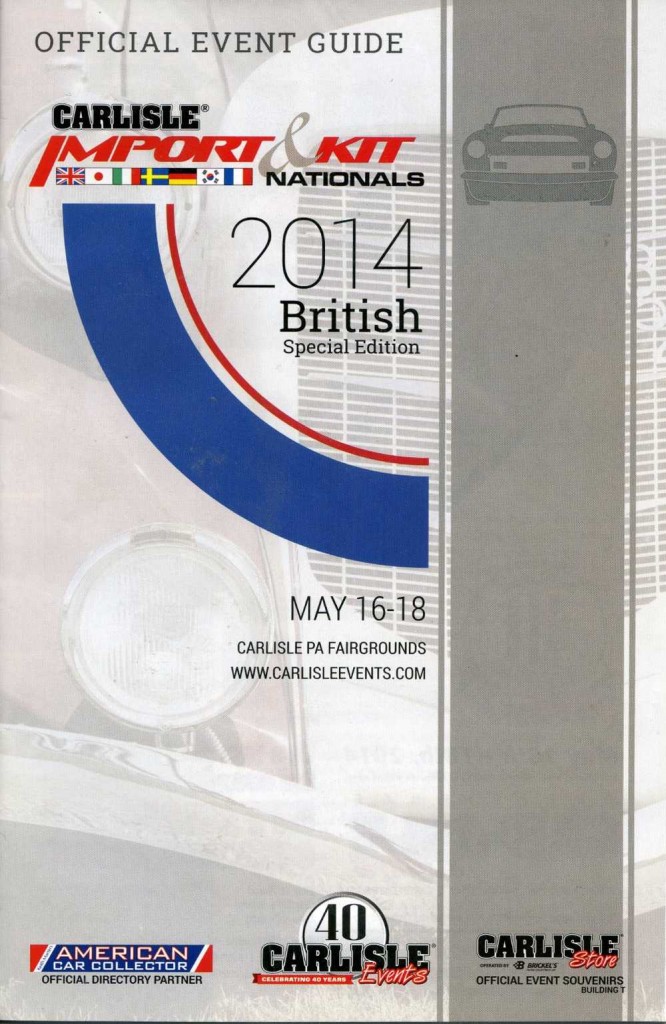 The Carlisle show was held on May 16-18, 2014 and we were looking forward to participating, seeing old friends, and meeting new ones.  An event like this is exciting and exhausting but worth the effort in every way.  What a trip this would be!

Rick and I geared up and with Rick at the wheel we were there in no time flat.  When I drive across the country it tends to be a leisurely trek with stops at Steak & Shake, rest stops, scenic overlooks, and roadside attractions like the biggest frying pan.  But with Captain Rick in charge, we make our destination nearly as fast as a plane would take.  I’ve learned to sleep well in the car – while not driving, of course.

Arriving at the AACA Museum:

Our first stop was the AACA Museum in Hershey, Pennsylvania.  After our 2013 visit to Carlisle, we left our 1962 Shark Roadster there for a great display called Pop Culture & Cars.  We were honored by the Shark’s appearance as part of this exhibit and great thanks to both Mark Lizewski and Paul Sable for making this happen.  Click here for more detail on this exhibit.

And luckily, our first “roadside attraction” was waiting for us at the museum – the Hershey Chocolate Kissmobile.  Most people know of the famous “Productmobile” – the Oscar Meyer Weinermobile – so seeing the Hershey Kissmobile is a surprise to most everyone. 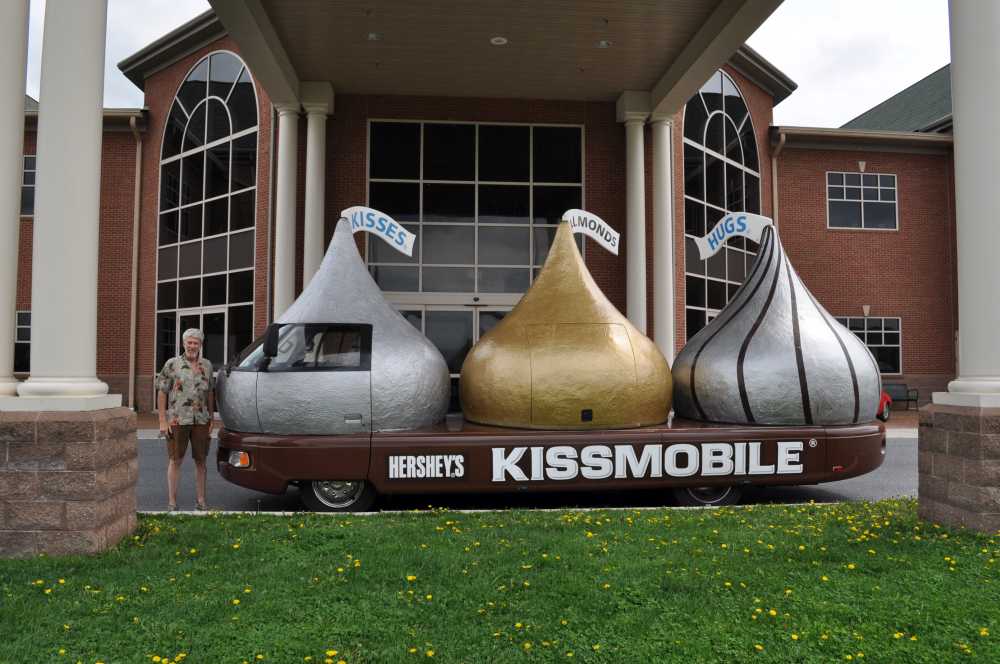 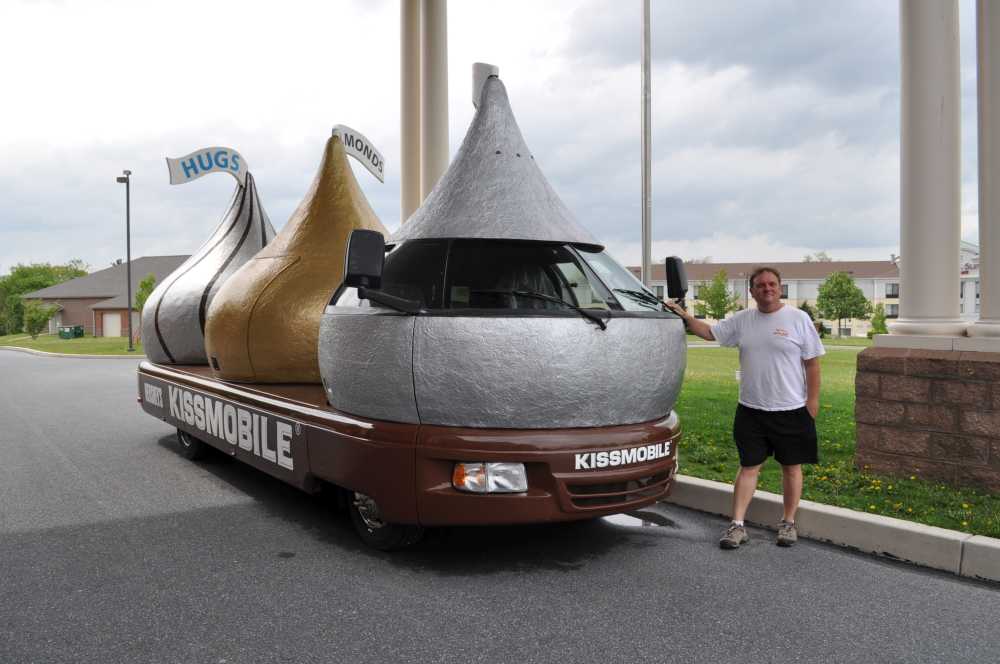 But productmobiles are not new and there are many out there for us to see.  Click here to see a website for these vehicles.  If you really like these kind of cars, be sure to check out the book by good friend James Hale called The Wonderful Wacky World of Marketingmobiles which is the name given to these types of vehicles over in the UK. 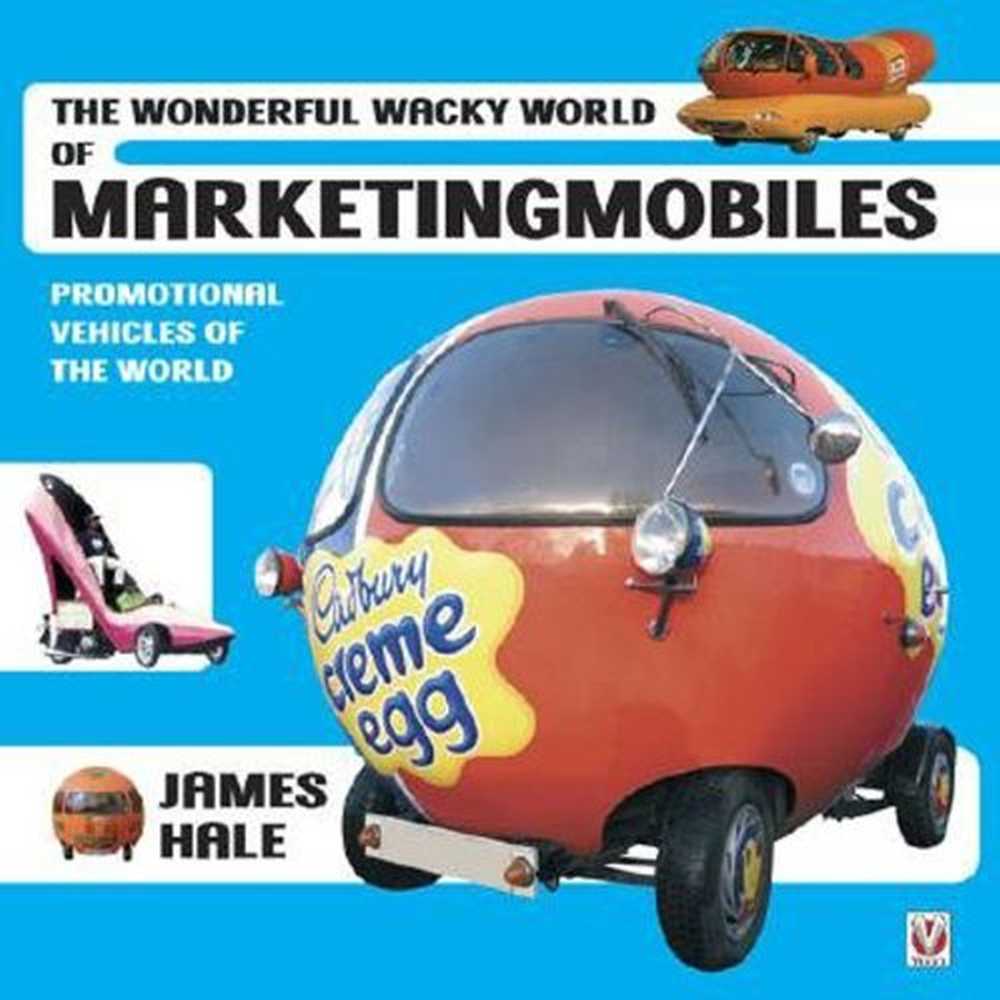 Once we got inside, we had to look around (again) and quickly met Mike Reilly – Catalog Librarian of the AACA Museum and fellow Nash Dealership literature enthusiast. 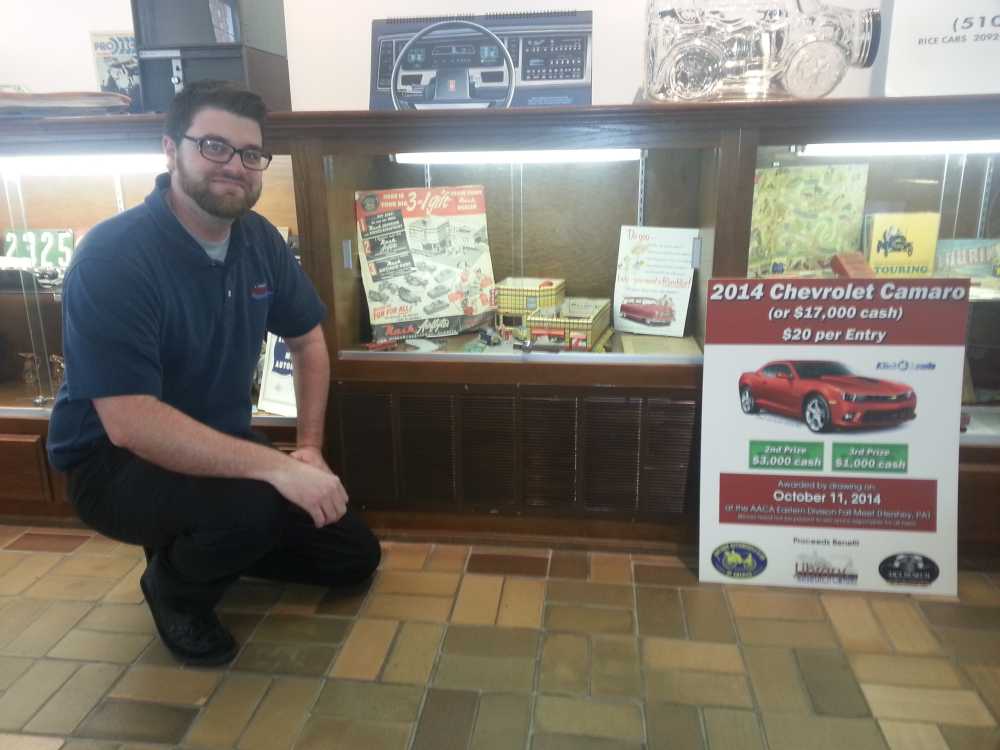 You may remember that earlier this year I ran a story on a great piece of literature introduced to me by historian Alden Jewell – a 1953 Nash Dealership “kit” that you could assemble yourself as a display.  Click here to review that story.  Built primarily for kids, it was wonderful and I found one on ebay and posted a story about it.  However, Mike Reilly beat me to the punch by assembling one he had found for the museum, and you can see Mike and the finished Nash Dealership on display in the above photo.  Thanks for the inspiration Mike!

We bid our farewells, left the AACA Museum for the short drive the Carlisle Fairgrounds with the Shark now in tow, and looked forward to the start of Carlisle 2014.  The first thing we did on arriving is check the schedule, and we quickly found out that Merrill was going to be one busy guy.  Merrill would be signing autographs and was available to speak with across all 3 days of the event.  And he had a speech to give too! 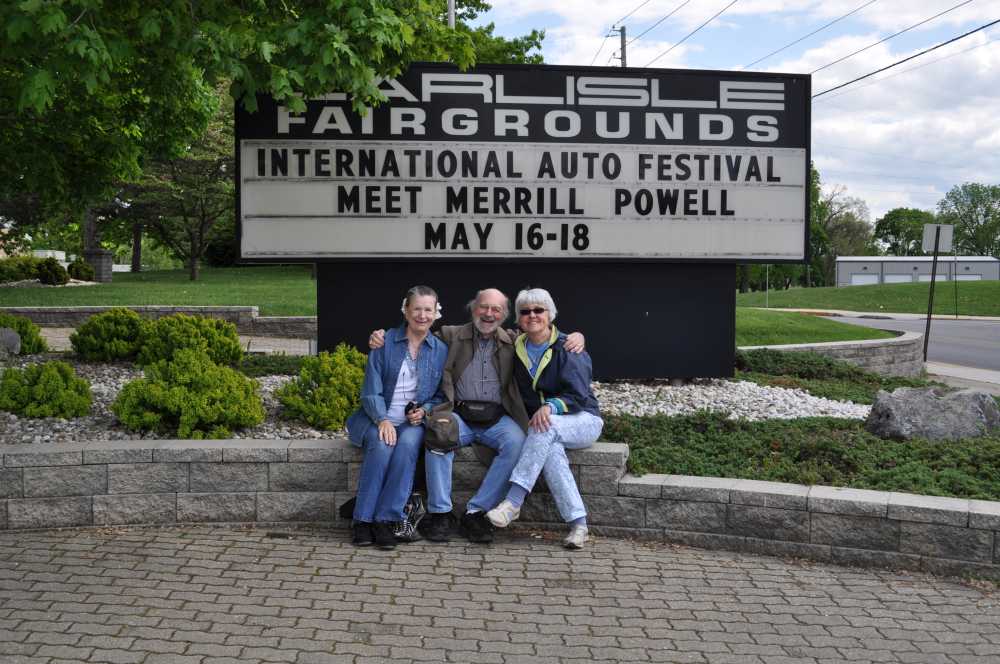 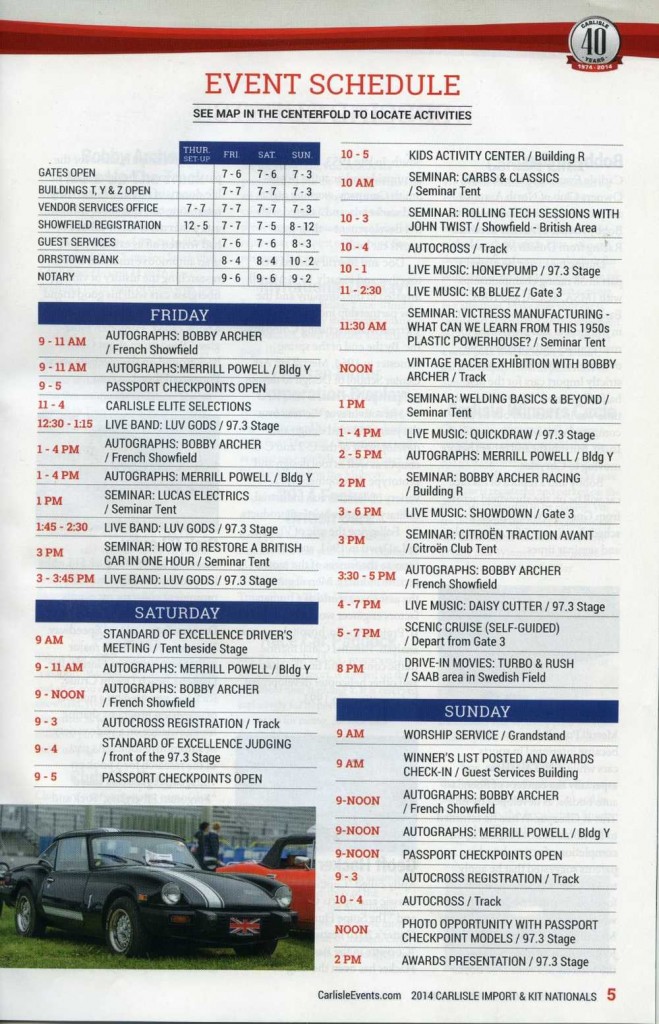 And Ed Buczeskie of Carlisle Events did a great job at putting together everything to make a successful weekend for all.  The program did a nice job of reviewing the seminars, showing the cars that would be on display, and giving background of each of the presenters.  See the detail on Merrill’s seminar, below, on:

The History of Victress Manufacturing – What Can We Learn From This Plastic Powerhouse of the 1950s. 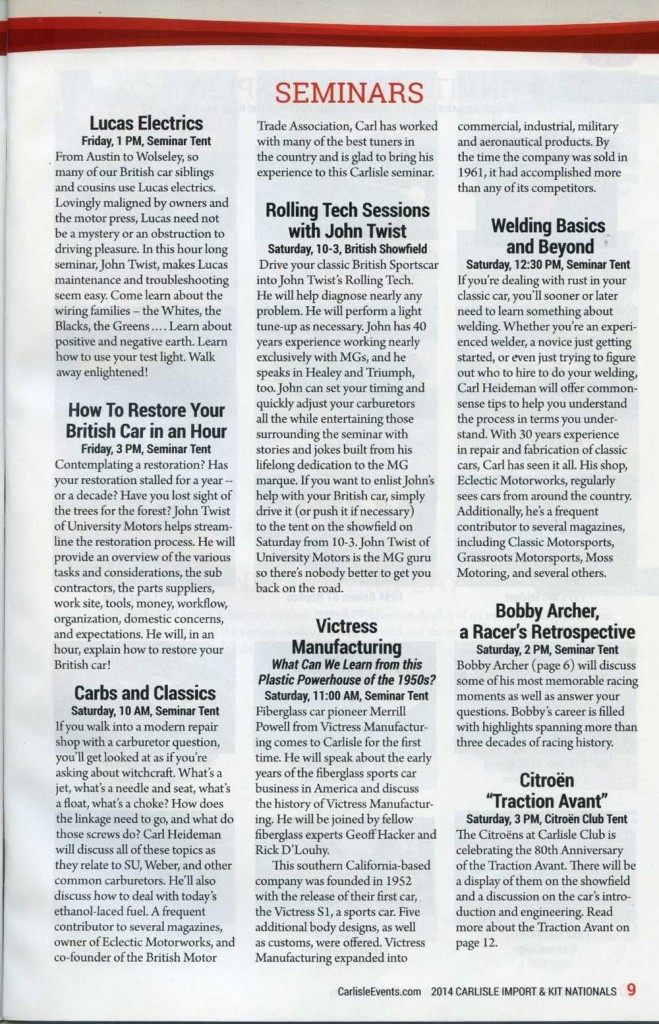 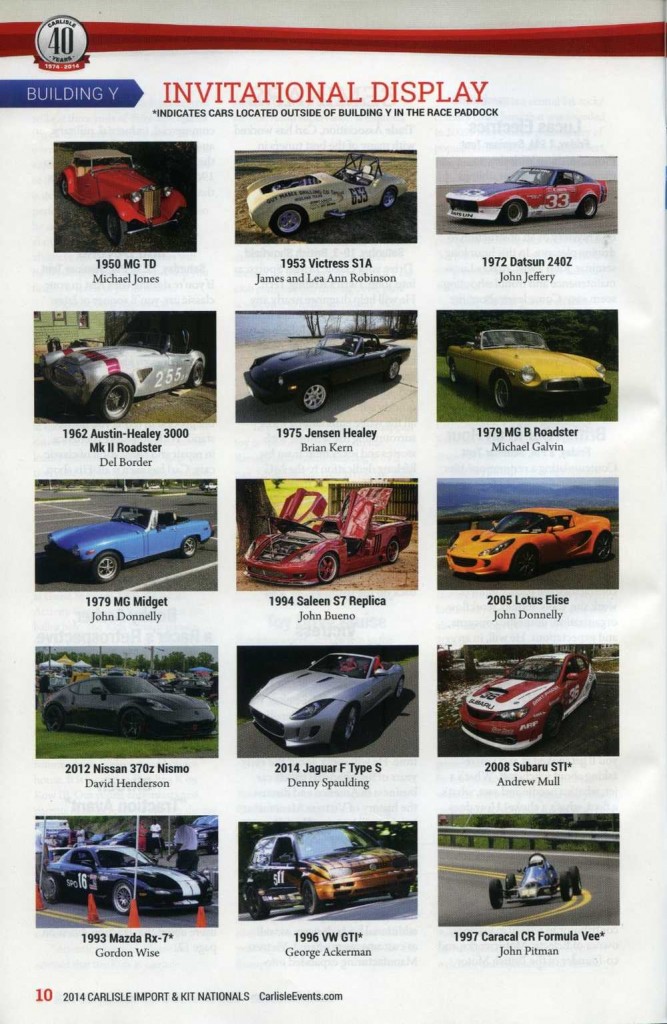 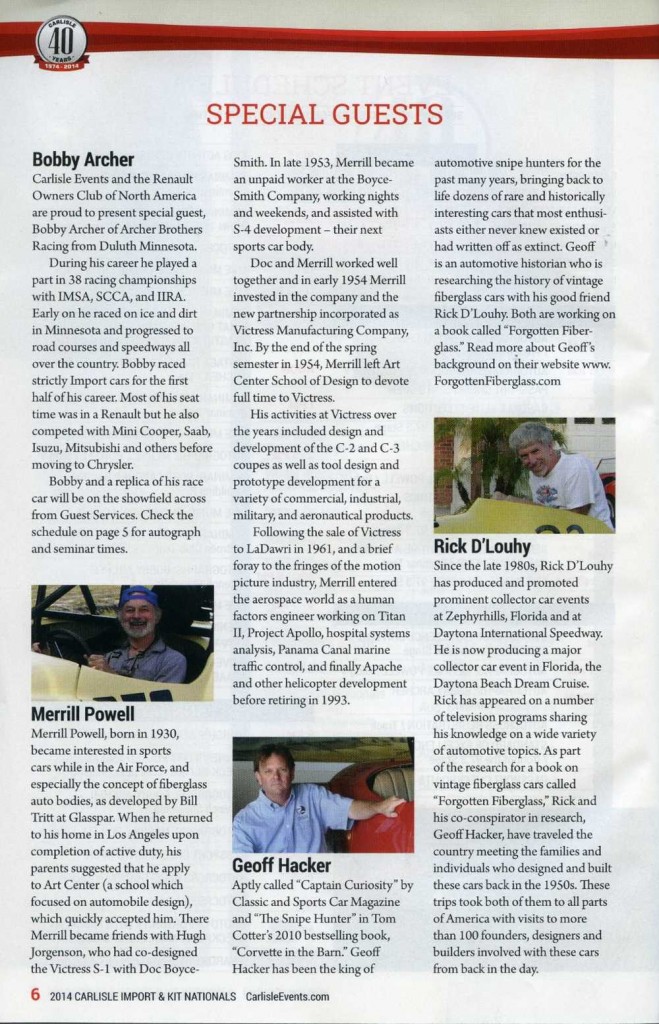 On arriving at the Carlisle Fairgrounds, we went straight to the Invitational Building and was immediately greeted by friends Jim and Lea Ann Robinson – owners of the Guy Mabee Victress S1 Roadster.  And they had an excellent idea to set up the area for Merrill Powell and company next to their Victress.  Check out these photos with Merrill “working the crowd” at the table next to the Guy Mabee Victress throughout the 3-day event: 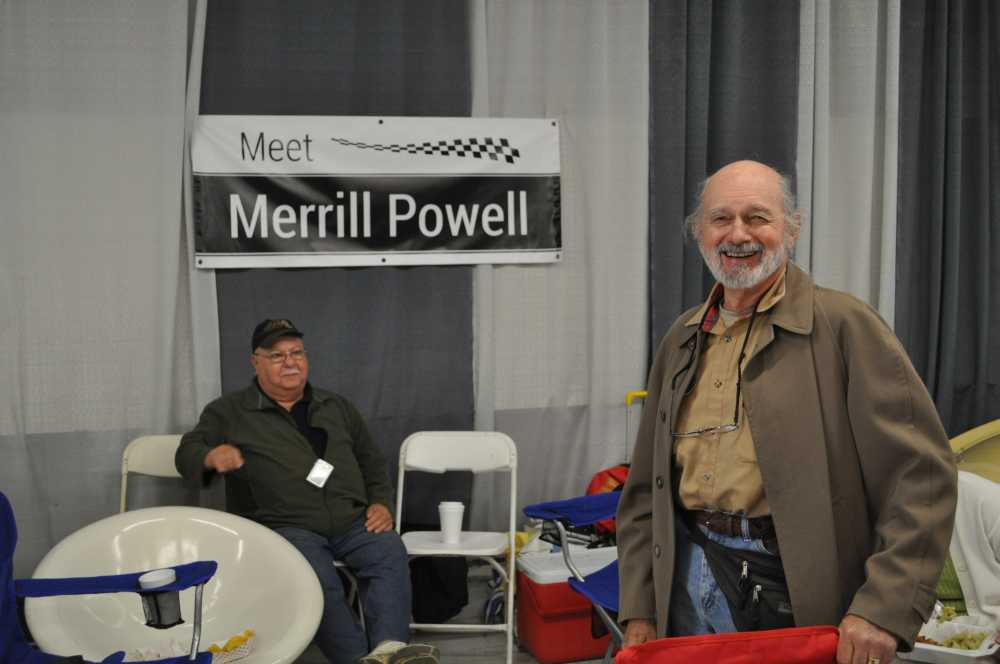 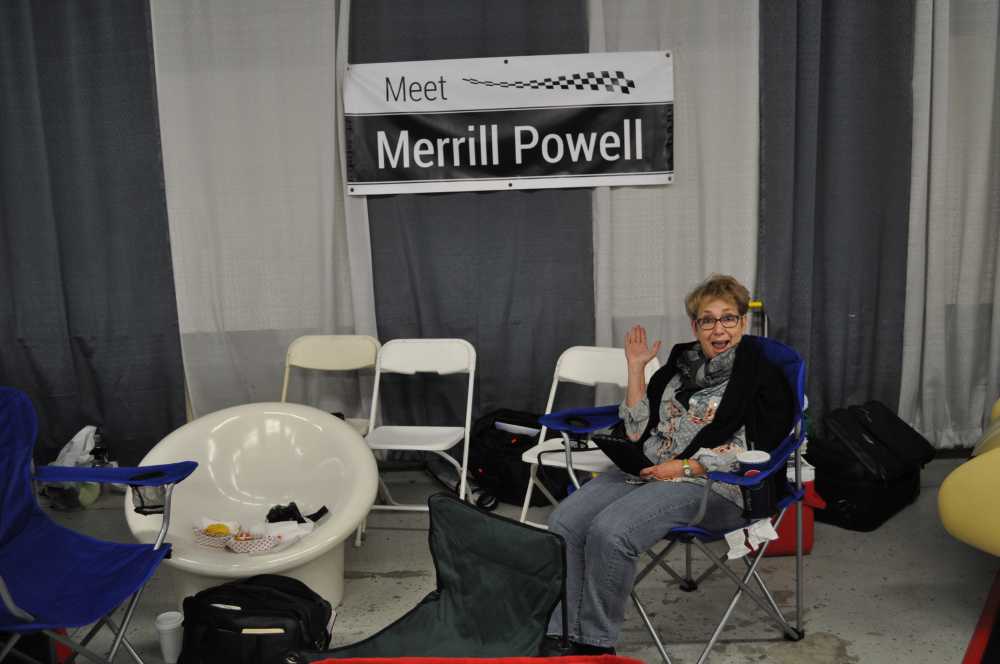 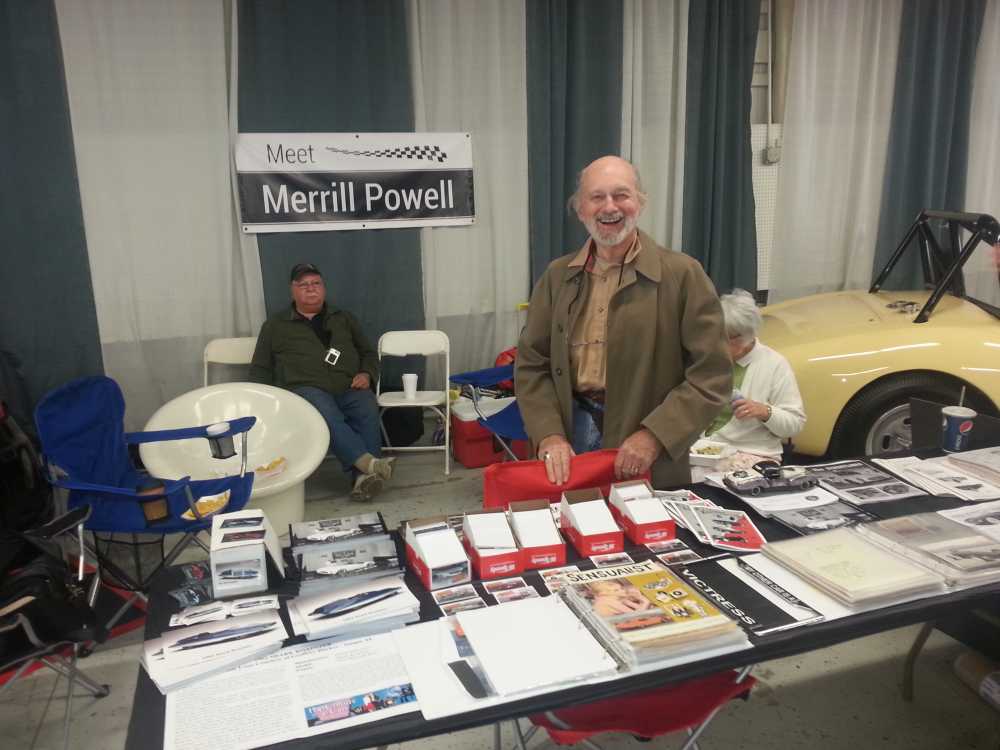 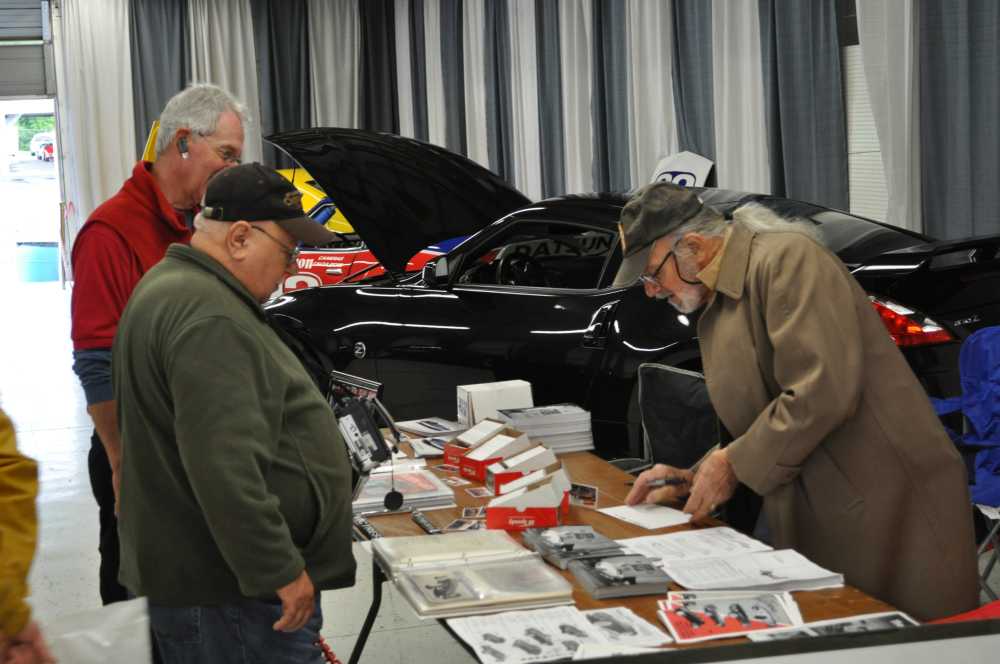 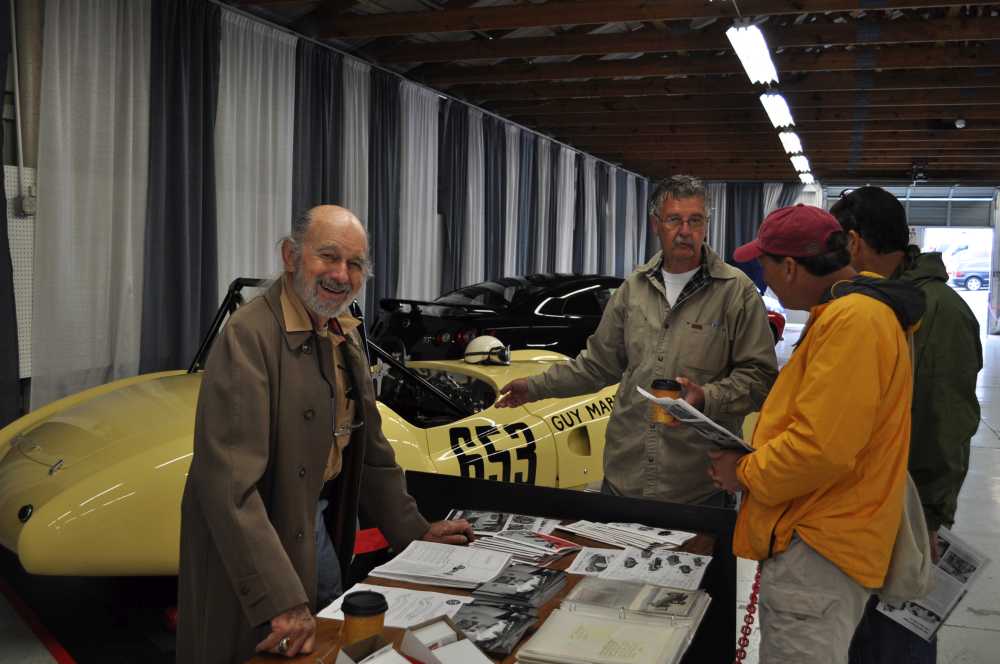 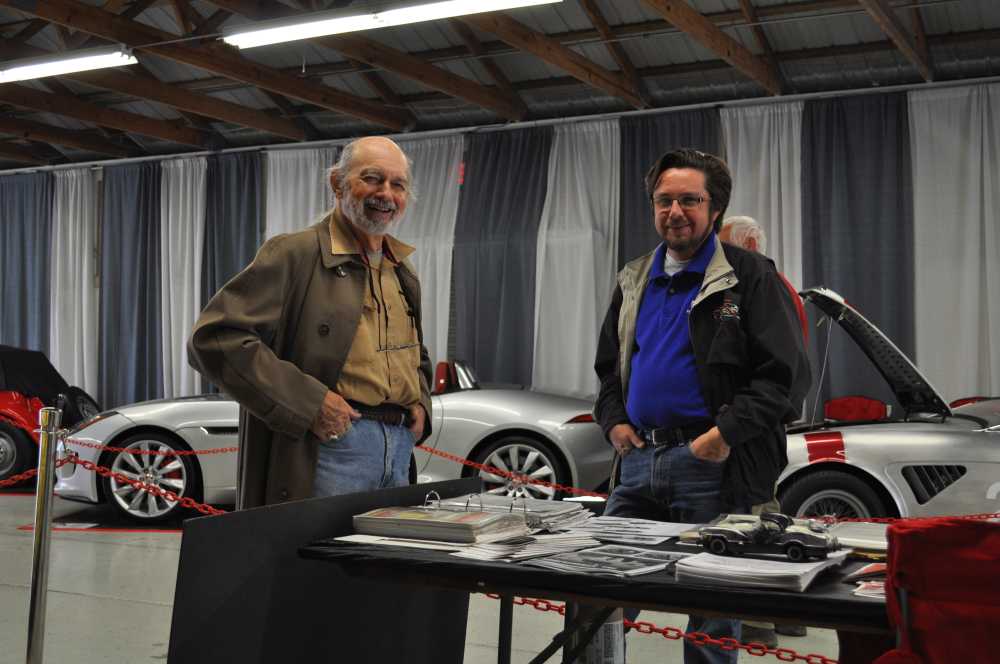 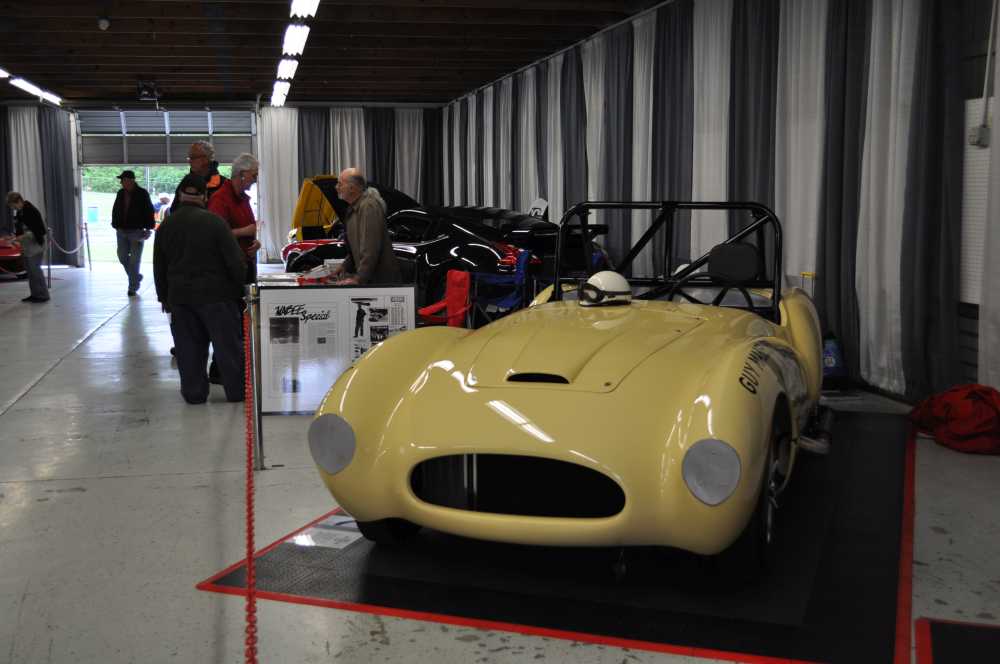 After Merrill finished one of his first autograph sessions, Ed Buczeskie arranged a tour for Merrill, his wife Gerianne, and Lea Ann Robinson of the fairgrounds, car show, and other interesting aspects at Carlisle: 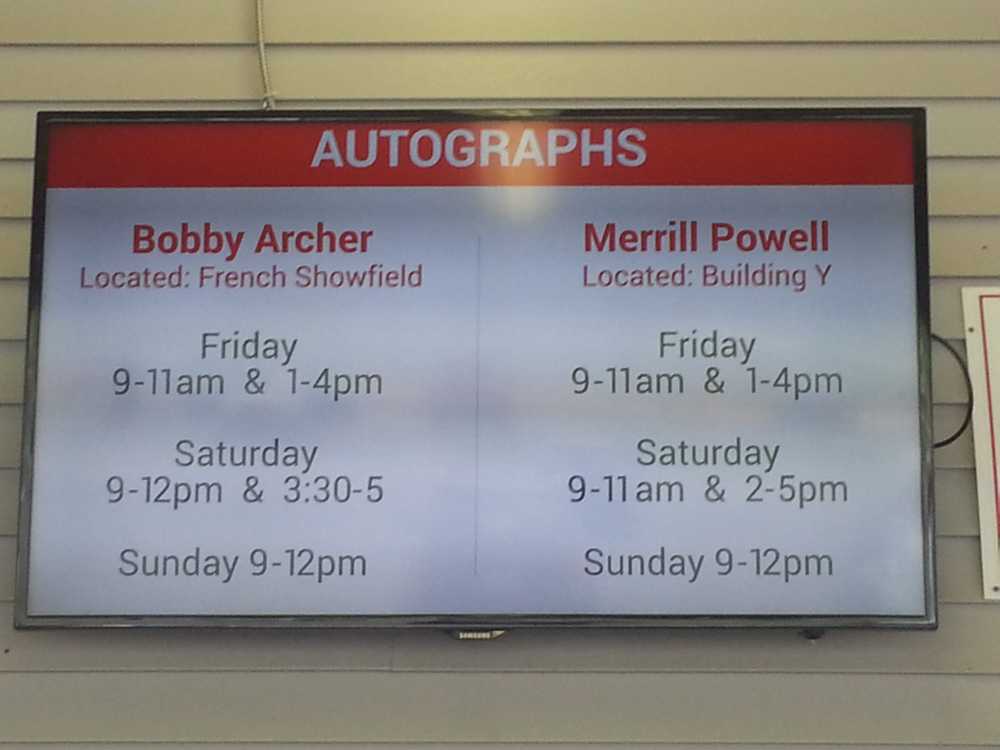 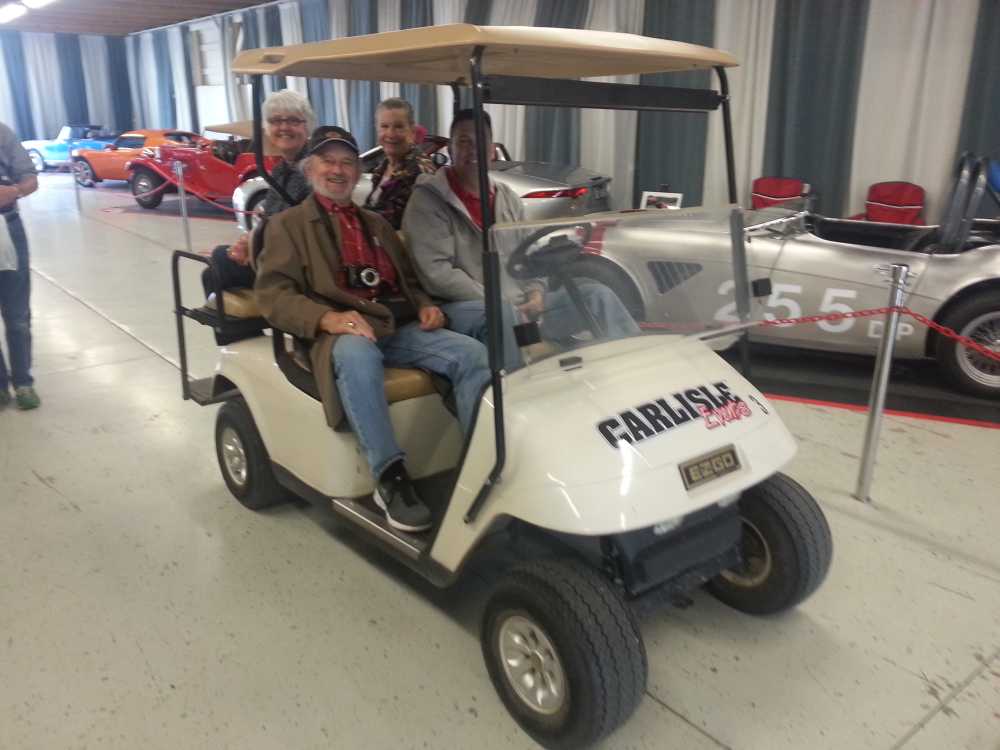 We met many good friends that weekend and one special friend that stopped by was Jean Poirier shown below at the wheel of the Guy Mabee Victress Special: 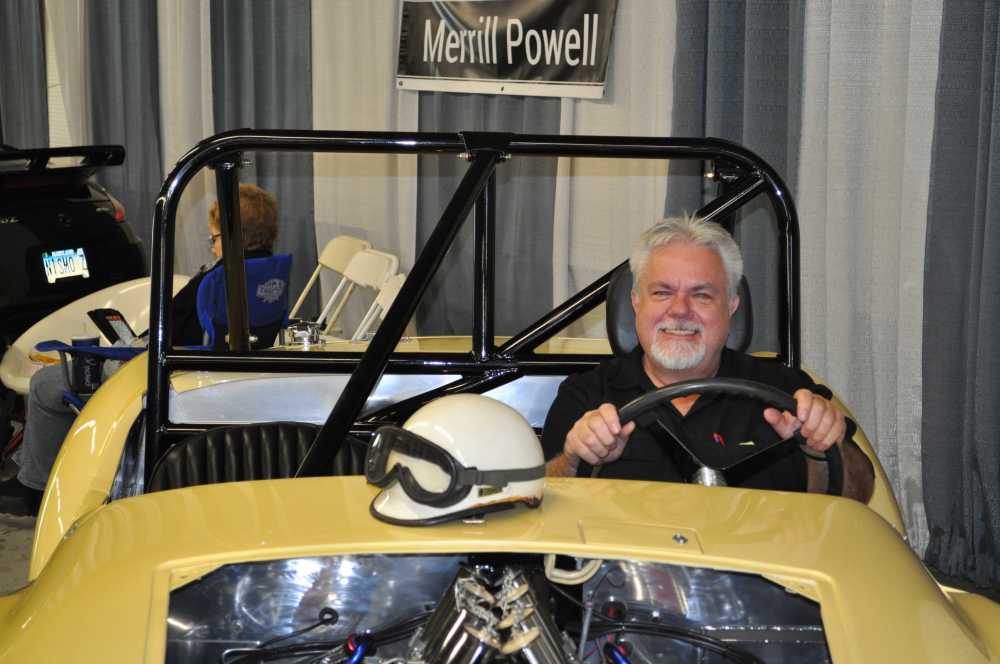 And we had the Shark on display in the Invitation Building too: 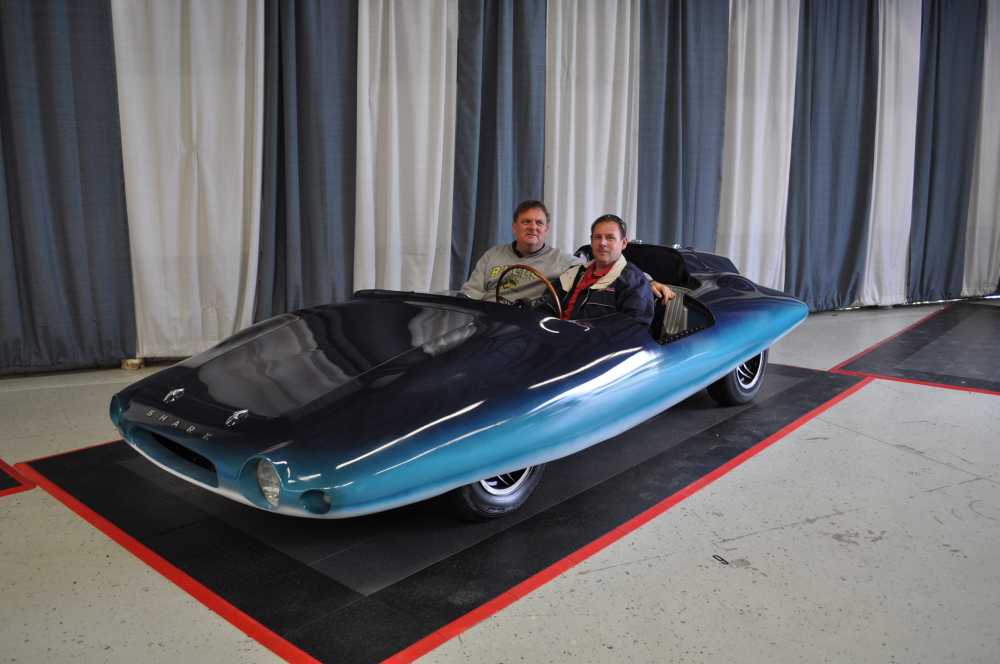 And you’ll see some video in our stories about Carlisle this year.  We’re embracing more multimedia to give each of you a better sense of the cars, their story, and the sights and sounds of an event.  Here’s a short video on Jim Robinson taking Merrill Powell for a quick spin in the Guy Mabee Special:

And here’s a short video of us starting up my Shark so you can hear how it sounds:

And of course it sounds just like the Guy Mabee Victress – that’s just a coincidence though….*wink*

In the next few weeks, we’ll share more stories and photos of Carlisle, 2014.  In the meantime, I hope you enjoyed this story, and until next time…