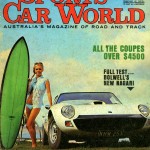 This Article Appeared in Australia’s “Sports Car World” in February 1970.

Beau Hickory is one cool guy.  Rick D’Louhy and I tracked him down in Arizona a few years ago, and we haven’t been the same since.  Beau doesn’t look at things the way others see them – he sees and designs everything including cars – to their full potential – and beyond.

In speaking with Beau, I found that he had designed many different automobiles over the years – and restored historic ones too.  As for today’s car, it’s one of my favorites – it’s called the Virgo and if you find one, you’ll instantly own two cars – not just one.  You’ll learn why later in our story.

In the late 1960’s, Beau lived in the San Francisco area and had been involved in racing and sports car design.  Toward the end of the 1960’s, he created a company called “Zodiac Motors” – a division of “Barbary Coast Enterprises.”  His hope was to design, create, and build 12 different models of cars – one for each sign of the Zodiac.   Remember gang….this was the 1960’s, and Beau was exactly in tune with the people and the times.

Beau designed and built the Scorpion, the Taurus, and today’s car called the “Virgo.”  That’s as far as he got in terms of cars along the Zodiac, but that’s more than impressive to me – and I think you’ll be impressed, too.

Today’s story appeared in “Sports Car World” magazine in February 1970.  It was published in Australia, so not too many copies of this magazine are around.  In fact, it took me awhile to find this one.  But once I found out that fiberglass friend Michael Lamm wrote the article in 1970 – I had to find an original copy 🙂

So….let’s see what Michael had to say about Beau Hickory’s Virgo back in 1970.

Do you need music for this story too?  Click on the button below to listen to “The Age Of Aquarius” which seems appropriate for Beau’s achievement with this car. 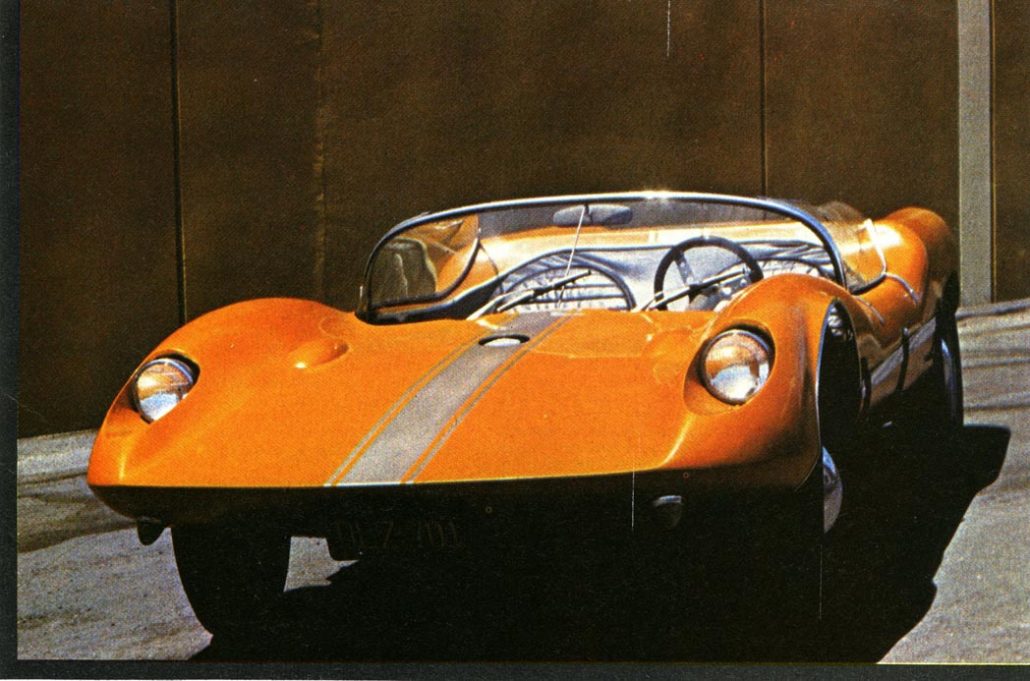 Whip off the front and rear body sections of the new VW based Virgo street sportster and you’ve got a dune buggy that’s ready for off-road sandstorming.  This dual-purpose fun car comes in the States either in do-it-yourself form or ready to drive. 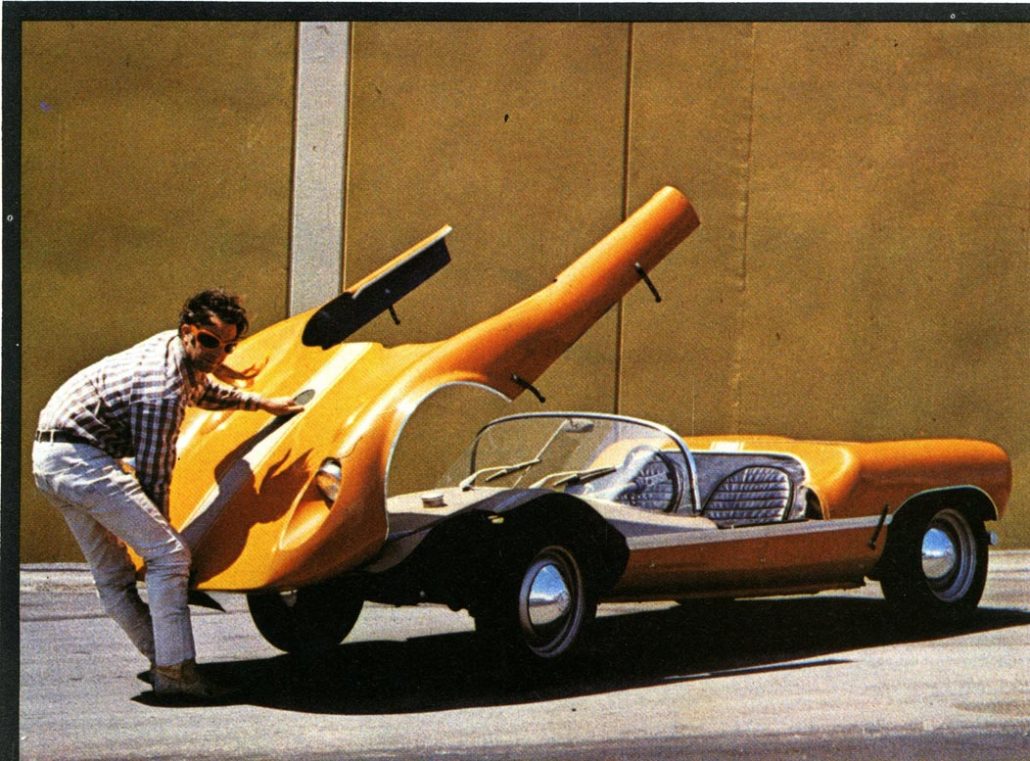 The Virgo uses stock Volkswagen Beetle components, including an unshortened chassis.  After discarding the standard body and beefing the platform with square tubing, the dune buggy underpinnings are merely bolted on.  These include a new gas tank, seat frames with upholstery, dashboard, and miscellaneous fixtures.

That done, it’s a simple matter to lift on the front and rear body sections.  Each one weighs about 45 lbs Voila!  Instant sportster.  The nose and tail pieces carry regular headlights and tail lamps.  These plug in or disconnect with bayonet fittings.  It takes about 30 seconds to convert from street to beach clothes or back again, because only six rubber straps hold the fiberglass front and rear body sections in place.

These slip down into U-shaped metal trim strips on either side of the car.  The stainless trim holds the panels snugly in position.  I drove the Virgo shown – the second one made – and found it sheer delight.  It’s quite comfortable and roomy considering its 39.5 inch overall height. 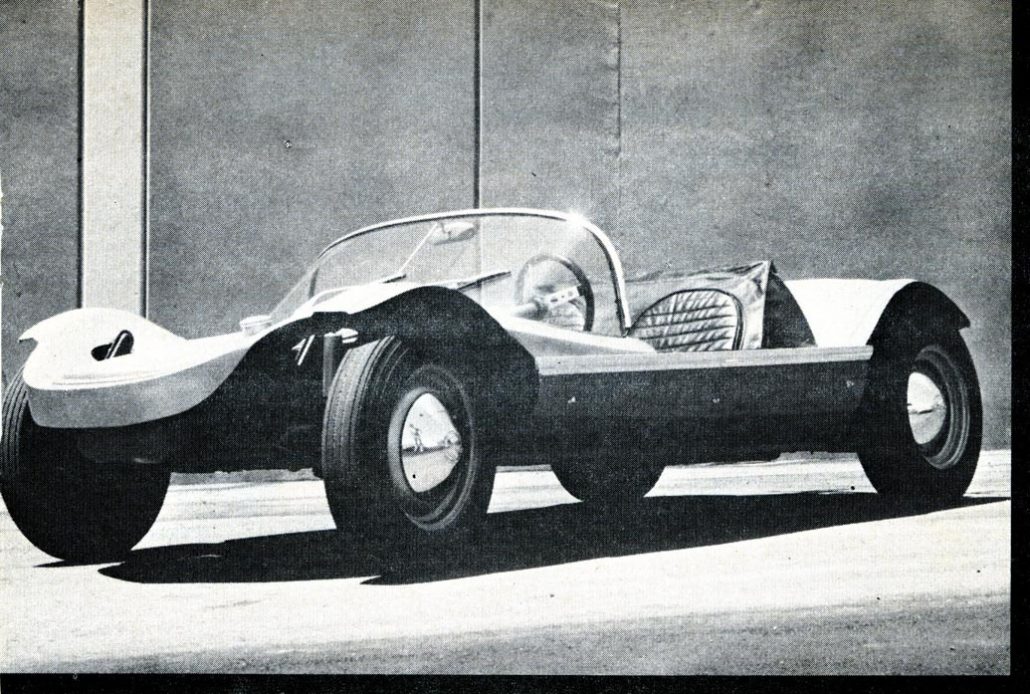 Here The Dune Buggy Body Is Revealed – Hiding Underneath The Sports Car Body.

The car accelerates briskly, corners like a VW without a body, and makes very little more noise than one.  Minus its outer skin, there’s a cargo deck for luggage in the rear of the dune buggy.  Driving feel in this state, though, is unchanged.

Optionally available are special wheels, side curtains, rear bumper-cum-muffler, adapters for headlights on the dune buggy version and a fabric top.  Locals may order the Virgo in various colors and upholstery patterns; also with a choice of engines ranging from the stock 40-bhp VW to a full-race Porsche or Corvair.

Editor’s Note:  With the popularity of buggies growing in Australia, it shouldn’t be very long before an on-the-ball manufacturer copies this idea and builds up a locally made special.  With the advantages of the lift-off body it would then become quite an attractive proposition.  During the week the unit could be used for everyday running about and at the weekend off comes the body and you have an out and out buggy.  Not a bad idea…..How about it?

Quite a car that Beau designed.  Several were built, but none have been seen since the early 1970’s.

Where are the Virgos?  Might you be the first person to find one?  Remember….a Virgo without its sports car body looks different, so to find one car – you have to be on the lookout for two different cars.

Beau and his wife Tinell have provided tremendous amounts of information on the Virgo and other cars that Beau either designed and built or had a hand in their restoration.  I look forward to sharing more stories with their help in the near future.