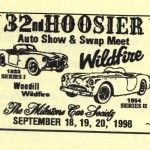 Glenn Brummer Tells Me That This Is A Copy Of The Dash Plaque Given Out For The Milestone Car Society Show in 1998 – Great Looking Wildfires On The Plaque!

Click here to read other parts of the story

I’ve wanted to meet Glenn Brummer for years.  And finally last year it happened.  Good friend Gregg Griffin put me in touch with Glenn, and Glenn’s e-mail inbox has never been the same 🙂

I wanted to meet Glenn because he wrote one of the best articles on the history of Woodill Wildfires in 1998.  This was one of the first retrospective reviews of the history of Woody Woodill, and it remains an excellent source of information on these cars today (Michael Lamm has also written an excellent article in Collectible Automobile about this car, and we’ll discuss that in future stories).

Glenn has turned out to be a great friend and even a more impressive historian than I could have imagined.  He continues to share with me his knowledge of Count Alex de Sakhnoffsky, Teardrop Cars, and other impressive points of knowledge.  He even recently found 3 original pictures I had not seen of my 1948 Kurtis Omohundro Comet!

Glenn is one amazing guy and someone all of you should know.

And that’s what I’m doing today – introducing you to our “friend of fiberglass” Glenn Brummer and the second part of his excellent story on the Woodill Wildfire published in 1998. 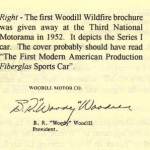 Caption: The first Woodill Wildfire brochure was given away at the Third National Motorama in 1952. It depicts the Series I car. The cover probably should have read “The First Modern American Production Fiberglass Sports Car.”

The second series Wildfire was featured on the cover of the August 1953 issue of Motor Trend.  The article inside shows a factory built Wildfire being prepared for shipment to the Paris Auto Show on the Norwegian freighter, Risanger.  The car also was in the spotlight at a chemical industry exposition, while in Paris, because of its use of fiberglass for a production automobile body.

Some of the production cars used the stock 90 horsepower Willys six, but Woodill also offered a “hop-up” kit with a tri-carb custom-case intake manifold inscribed “Wildfire”, headers, special camshaft, etc., boosting horsepower to 135; however, many of the factory assembled second series cars were built-to-order and they varied in trim and components.

At least one roadster was built for a Buick dealer with Buick V8 motive power and 1953 Buick teardrop headlight assemblies; another for a Cadillac dealer with Cadillac power.  That car may be the 1953 Wildfire shown in the February 1952 issue of Collectible Automobile.  It now has Chevy V8 power.  Another factory assembled series two car exists in the hands of Indianapolis Milestone member, Joe Sexton.  His is a 1953 version, S/N 9911, and is powered by a DeSoto Firedome Hemi V8.

Another early 1950’s automotive publication shows six grown male adults standing on the hood and front fenders of a series two Wildfire, graphically illustrating that the Glasspar body was as strong, or stronger than steel.  An accompanying photo shows a sledge hammer test – leaving the hood and fenders undamaged.

By 1956, Woodill had added a very unique “Kamm-Tail” hardtop coupe to the roadster line.  Apparently, only one was constructed and it was powered by a 305 horsepower Cadillac Eldorado engine.  Another second series production, a roadster was seen by the author at Hershey, a number of years ago, for sale, with original Oldsmobile V8 power.

Most accounts seem to indicate that at least seven of the factory built series one Wildfires and about fifteen of the series two cars were assembled, as production cars, from 1952-1958.  Approximately eighty kits were shipped throughout the country for assembly by private owners.  A 5/8 scale Wildfire called “Brushfire” was constructed on a 62 and 1/2” wheelbase chassis – a micro sports car for children ages six to twelve.  A 2 horsepower Continental engine was used.  It was priced at $495 in kit form or $670 fully assembled. 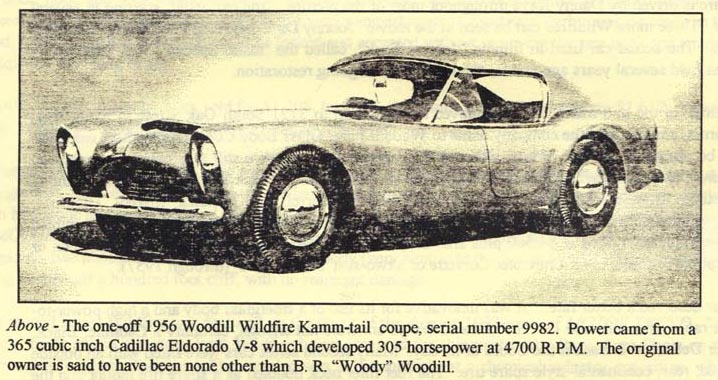 Caption: The one-off 1956 Woodill Wildfire Kamm-tail coupe, serial number 9982. Power came from a 365 cubic inch Cadillac Eldoado V8 which developed 305 horsepower at 4700 rpm. The original owner is said to have been none other than B.R. “Woody” Woodill.

The story of America’s first production fiberglass sports car would not be complete without mentioning its role in motion pictures.  The Wildfire appeared in “Written In The Wind,” starring Robert Stack.  Three Wildfire sports cars were used in “Knock on Wood” starring Danny Kaye and Mai Zetteling.  A Wildfire is driven by Danny Kaye throughout most of the picture…the car, itself, starring in several scenes.  Three more Wildfires can be seen in the movie “Johnny Dark” starring Tony Curtis and Piper Laurie.  The actual car used in filming “Johnny Dark”, called the “Idaho Special”, was found in an Indiana field several years ago and is, supposedly, undergoing restoration.

Sometime, in the mid fifties, Woodill moved his operation to 3121 South Oak Street in Santa Ana, California, and changed the company name to Woodill Fiber Glass Body Corporation where emphasis could be placed on the sale of kits, although fully assembled cars were still available.  The roadster, body only, was priced at $935 and the coupe, with windows, was priced at $1,135.

By 1958, mounting competition from other kit car manufacturers (Victress, Sorrell, McCormack, meteor, Glasspar, Devin, Almquist, and others) forced B.R. Woodill to look for other markets.  The factory assembled Wildfire was now priced at $4,500 plus and, if sports car buyers had not already chosen an M.G. or Triumph, they could buy a Chevrolet Corvette or a two-seat Thunderbird (through 1957).

The car deserved a better fate….it was innovative for its use of a fiberglass body and a high power to weight ratio.  If a full race 135 horsepower F-head Willys six were not enough, certainly a Cadillac, Buick, Ford, or DeSoto V8 made it the Cobra of its day.   Many second series cars were fitted with an outside mounted, rear, continental-style spare tire.  The fuel filler neck doubled as a spare tire mount and the wire wheel cover center spinner / knock-off served as the gas cap.  The only major fault with the car was protection from the elements.

Caption: The Woodill Wildfire used in the 1954 motion picture film “Johnny Dark” was one of three used during the production. The Idaho Special, driven by Tony Curtis in the film, was a Fielding sports car developed by test driver and engineer, Johnny Dark – he wins a race from Canada to Mexico, competing against prototypes from other manufacturers. The Fielding production coupe, in the backgrond, is a modified Willys Aero. Many of the scenes in the movie were shot at the Willys Motors plant in Toledo, Ohio.

One 1953 sand color Woodill Wildfire was spotted in Bakersfield, California, with a factory fitted removable fiberglass hardtop and several others were so equipped, as well; however, most owners were left to their own devices for protection from the weather.  A few owners opted for the molded Plexiglas “double-bubble” style racing shield in lieu of the one-piece (upside down, trimmed, Willys Aero) windshield.  Early brochures illustrated two-piece “Brooklands” style wind screens were available also.

“Woody’s” automotive endeavors did not end with the Wildfire.  He built a “universal” car prototype and attempted to market it in South America and almost got the people of Australia interested.  His California fiberglass body corporation did build bodies for Howard “Dutch” Darrin.  “Dutch” had conceived a fiberglass body for the imported FWD DKW.  Woody helped to redesign the car, called a Flintridge – Darrin, but only about twelve were built.

“Woody” Woodill died in November of 1989 and his Production Manager, Howard Miller, died in June of 1997, but their products live on in the hands of collectors who appreciate ownership of “The First American Production Fiberglass Sports Car.”

(Author Glenn Brummer’s Note: Thanks to Darwyn Lumley and Frank Cornell for their assistance in providing information used in preparation of this article.)

That’s the end of the second and final part of the Wildfire article by Glenn Brummer – and what an excellent article it is for all of us Woodill Wildfire enthusiasts out there.

Some updates on Glenn’s article:

And…by the way….none of the cast aluminum intake manifolds have ever been found.  No doubt they are on the wall of some collector’s garage – maybe one of you.  If you know where one is, take some pictures and send our way.  It will make “above the fold” news here at Forgotten Fiberglass and celebrations will ring out across the land.

Hope you enjoyed the story, thanks again to Glenn Brummer for his excellent article about “Woody” and his Wildfires, and until next time… 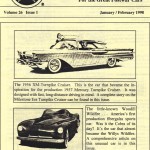 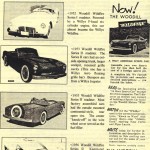 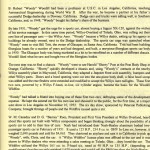 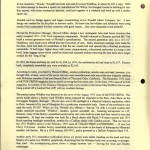 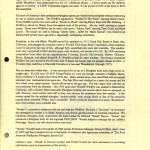 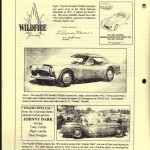 Glenn Brummer Tells Me That This Is A Copy Of The Dash Plaque Given Out For The Milestone Car Society Show in 1998 – Great Looking Wildfires On The Plaque! 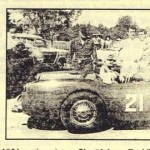 Caption: The Woodill Wildfire used in the 1954 motion picture film “Johnny Dark” was one of three used during the production. The Idaho Special, driven by Tony Curtis in the film, was a Fielding sports car developed by test driver and engineer, Johnny Dark – he wins a race from Canada to Mexico, competing against prototypes from other manufacturers. The Fielding production coupe, in the backgrond, is a modified Willys Aero. Many of the scenes in the movie were shot at the Willys Motors plant in Toledo, Ohio. 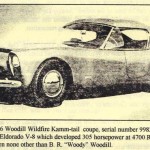 Caption: The one-off 1956 Woodill Wildfire Kamm-tail coupe, serial number 9982. Power came from a 365 cubic inch Cadillac Eldoado V8 which developed 305 horsepower at 4700 rpm. The original owner is said to have been none other than B.R. “Woody” Woodill.

Caption: The first Woodill Wildfire brochure was given away at the Third National Motorama in 1952. It depicts the Series I car. The cover probably should have read “The First Modern American Production Fiberglass Sports Car.” 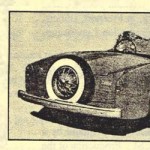