Back in 1952 when Bill Burke took a mold from Robert Petersen’s Cisitalia 202 coupe, who would have guessed that the entire process would be repeating itself nearly 70 years later.  But it’s a good thing to still have some “adventures” left in life.  The process of giving future generations a chance to experience a vintage 50s American Special “build” in person has always been one of our goals at Undiscovered Classics. 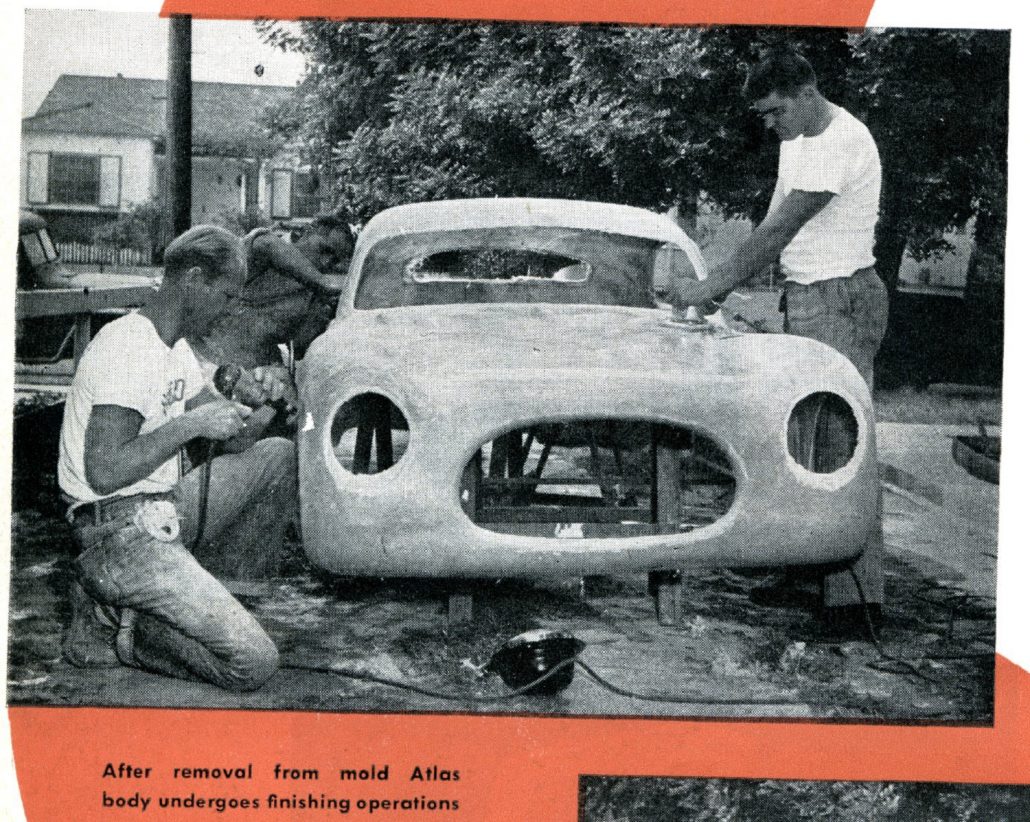 I was fortunate to call Bill Burke a friend.  We first met in 2007 when he was around 90 years old.  I was visiting Bill in Whittier, California to discuss the history of the Allied Swallow.  During that discussion I showed him a vehicle we had just acquired – the Moon Transporter – and we needed a cool car to put on the back of it.  He suggested doing a re-creation of his first belly tank.  And so we did.

Burke guided our team (the build was led by Ted Kempgens) in the recreation of his first belly or “wing” tank that he built in 1946.  We were honored to take this completed tribute tank to Bonneville Speedweek in 2009, with a subsequent article published by the Rodder’s Journal in 2010.

Bill Burke, Don Francisco and his team went on to built a second tank based on what they learned on the first tank and this became the World’s Fastest Hot in 1948.  Subsequently, their achievement appeared on the cover of Hot Rod Magazine in February, 1949. 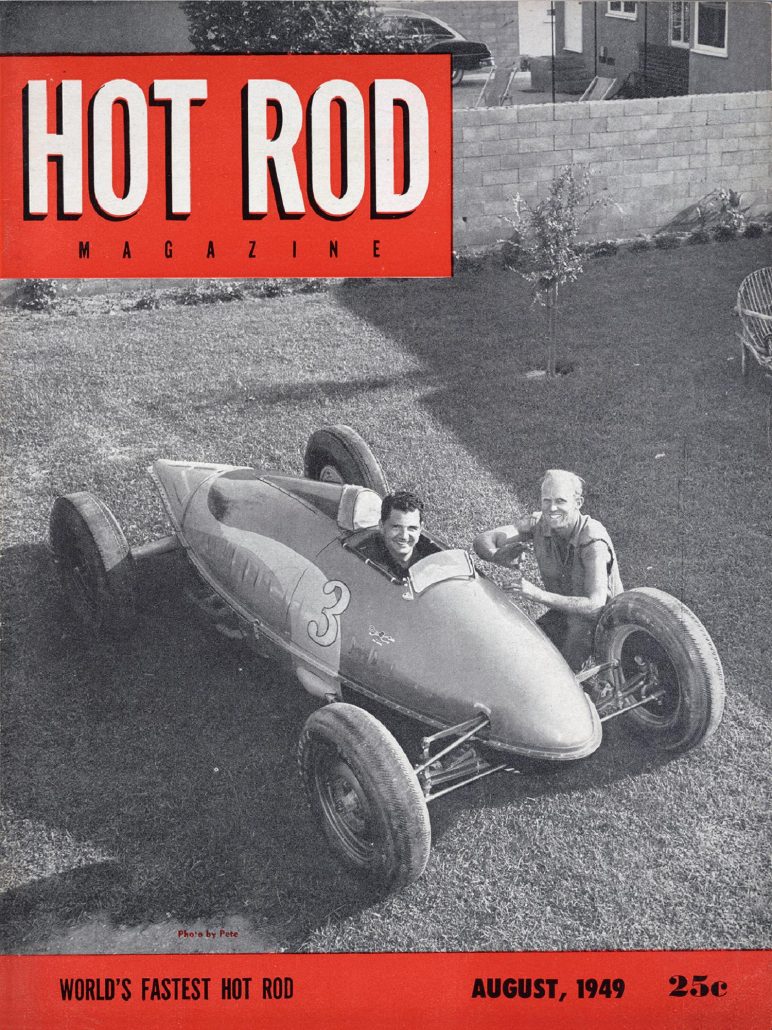 The American Cisitalia – Coupe and Roadster:

After his first world record, Burke wanted to do it again and when he saw his boss’s acquisition (Robert “Pete” Petersen who published Hot Rod Magazine and others) of a 1948 Cisitalia 202 coupe for an upcoming Motorama show he knew he had a way.

Click Here To View How Petersen Acquired the Cisitalia in 1952 and got it to Los Angeles, California

Bill Burke told me that he saw was the streamlined shape of the Cisitalia body as a new way to claim another speed record – but first he needed to find a way to get a body.  Since fiberglass was the new “wonder material” being touted in the press, he and his team became one of the first to use it to produce a sports car body in America.

Remember gang….fiberglass was the “carbon fiber” of its day.  Fiberglass sports cars were the stars of any show.  Fiberglass allowed one to create lightweight bodies which were easy to reproduce when compared to aluminum bodies.  This represented the best way to create a new shape or in this case copy an existing one.  Check out the images below from the February 1953 issue of “Modern Plastics” showing Bill Burke, Mickey Thompson and Roy Kinch with the mold and one of the first bodies and an Allied Swallow sports car produced. 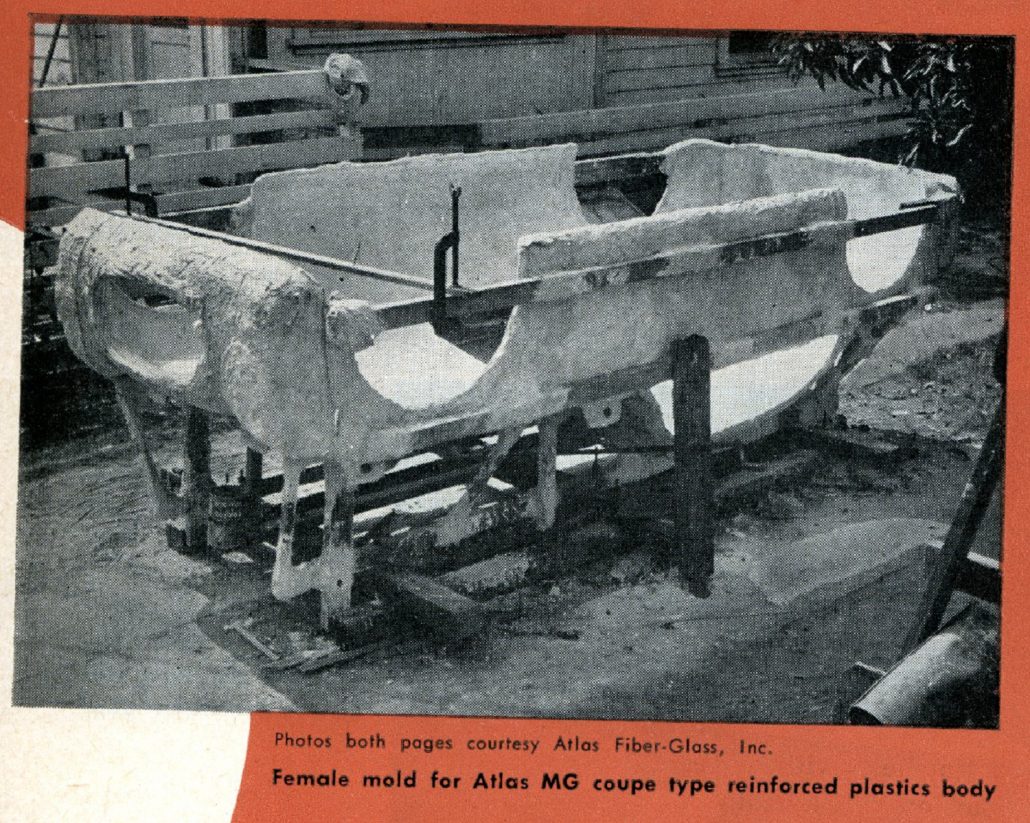 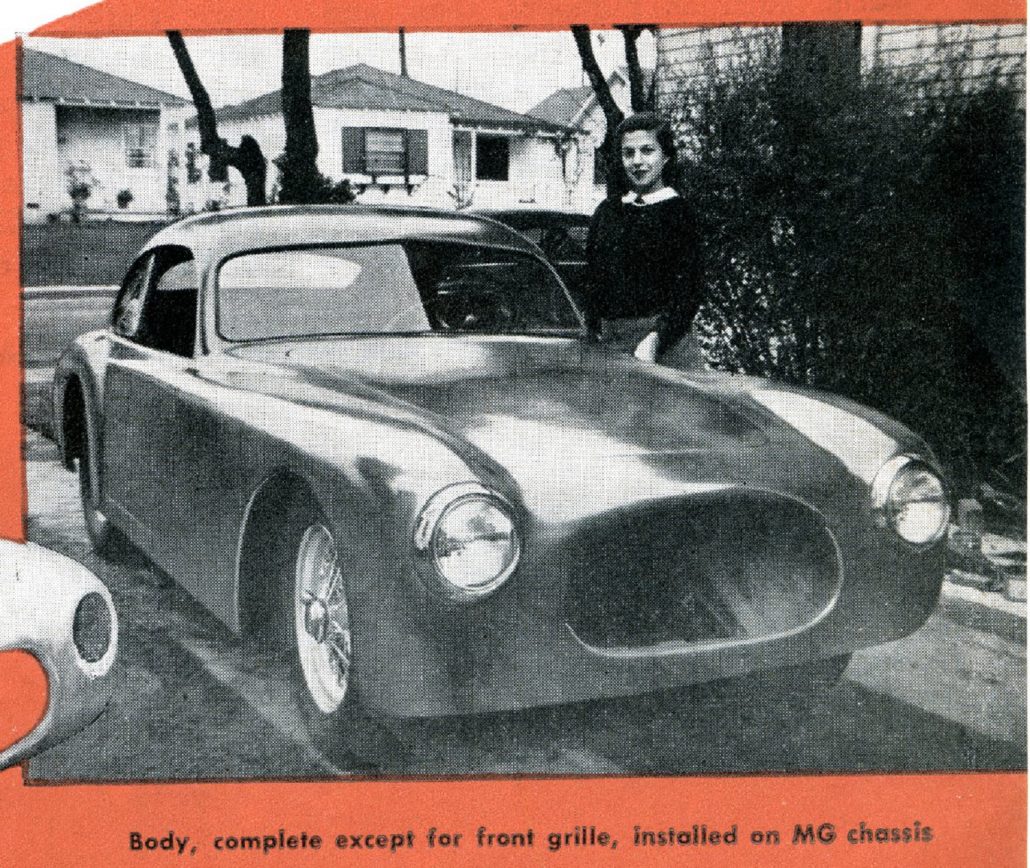 From the time they did the mold until setting his second world record in the fall of 1953, about one year transpired.  That’s record speed for a record car!  Bill Burke was an extraordinary man, and set the world’s record in his Allied “Cisitalia” Swallow in 1953 at 167 mph at Bonneville for a closed sports car.  Way to go Bill! 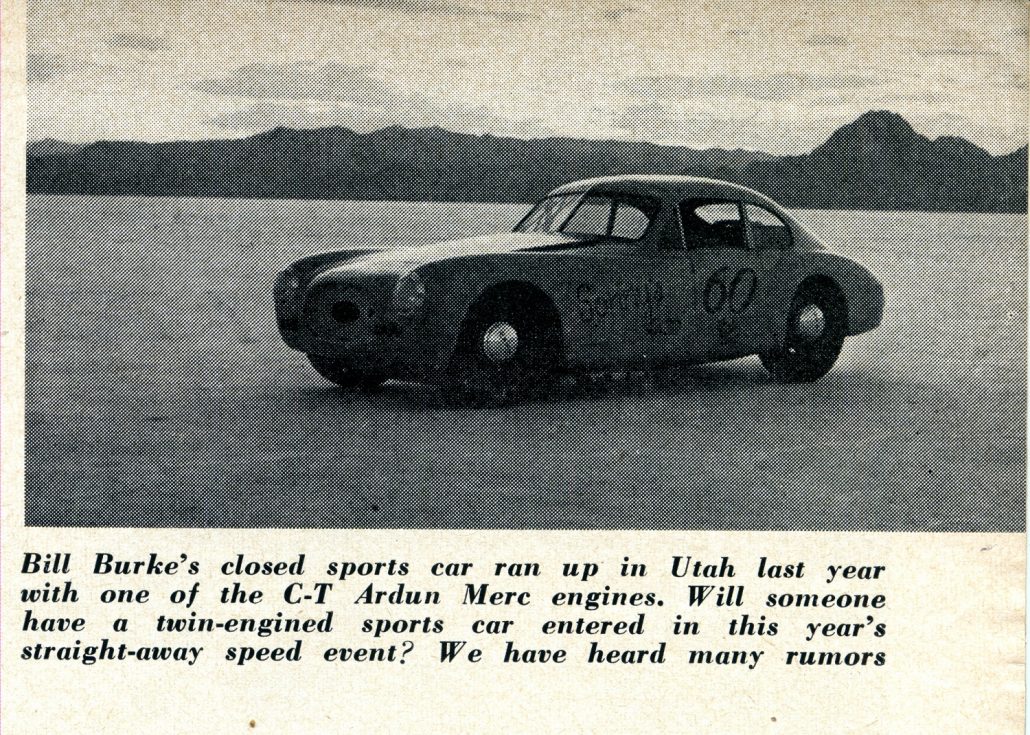 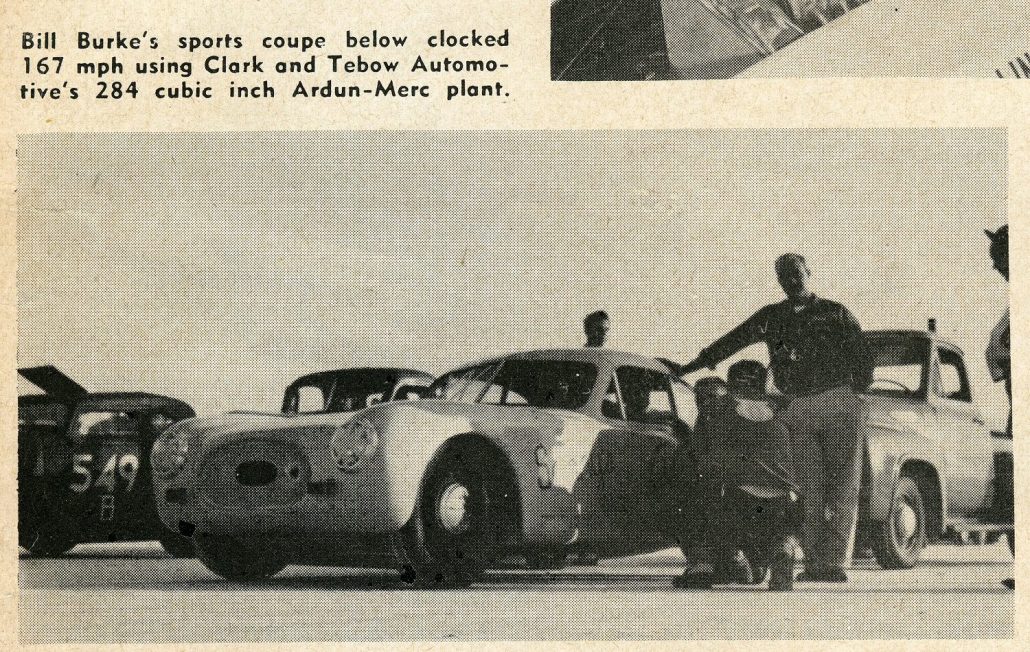 So let’s compare an Allied Swallow to a Cisitalia.  Back in 2010, we had an opportunity to bring together a field of American Specials on the lawn of the Amelia Island Concours d’Elegance.  By good fortune, we had both an Allied Swallow on the field with a Cisitalia 202 coupe.  Check out some of the photos of these cars below. Red = Cisitalia / Silver = Allied Swallow 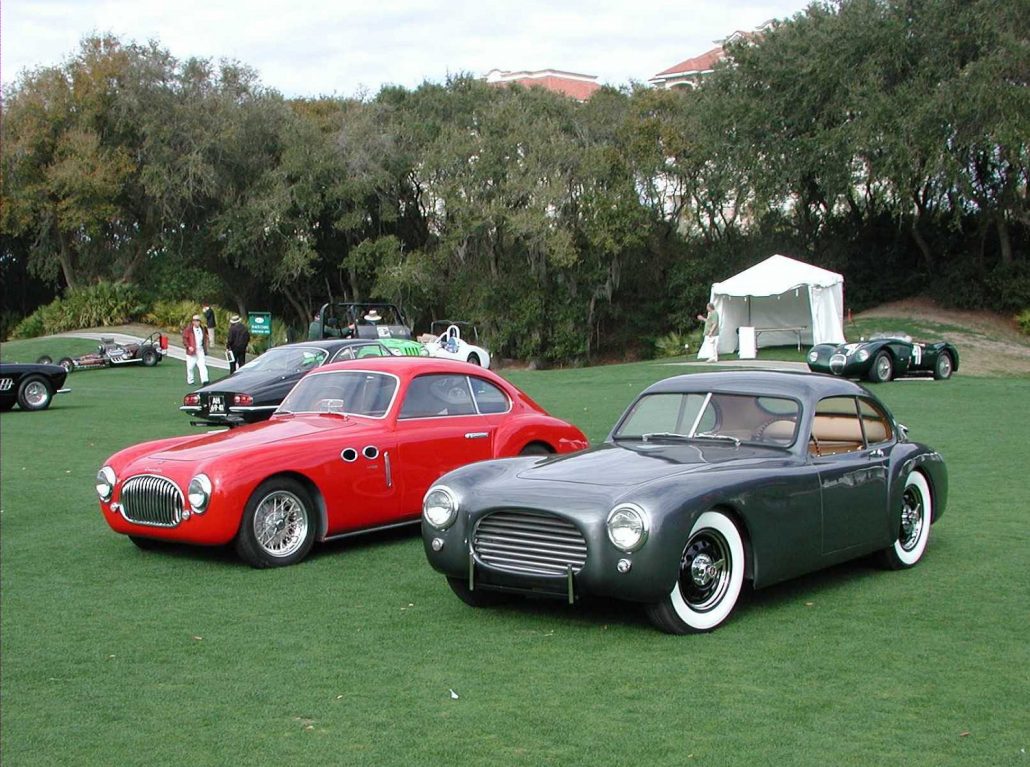 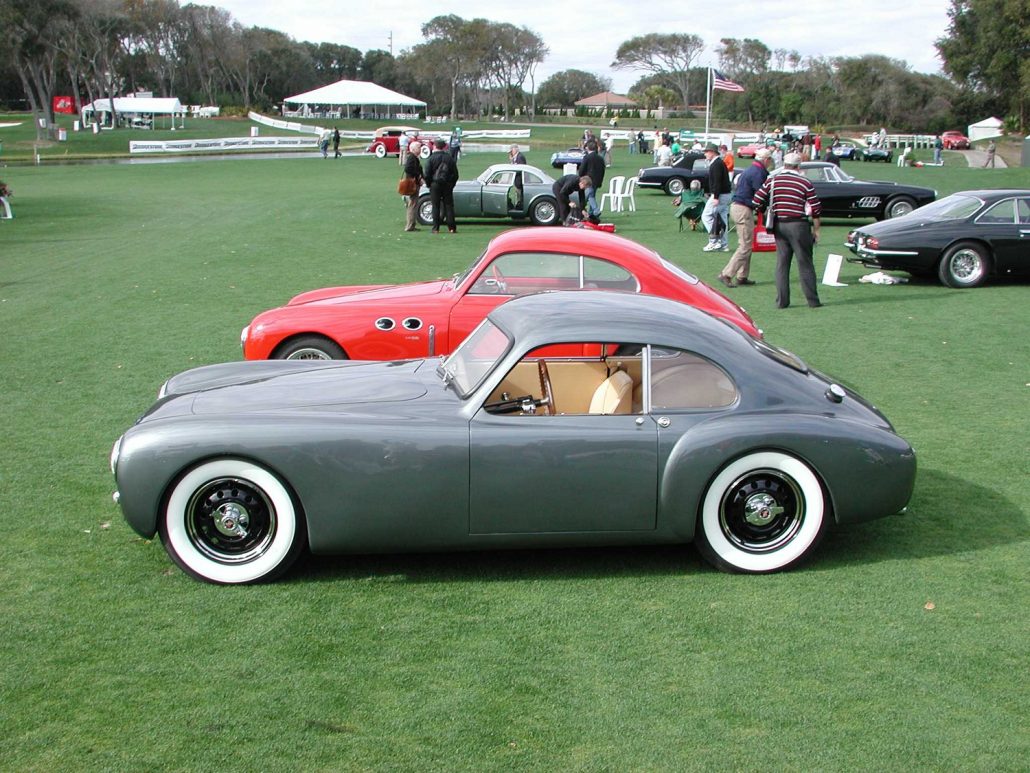 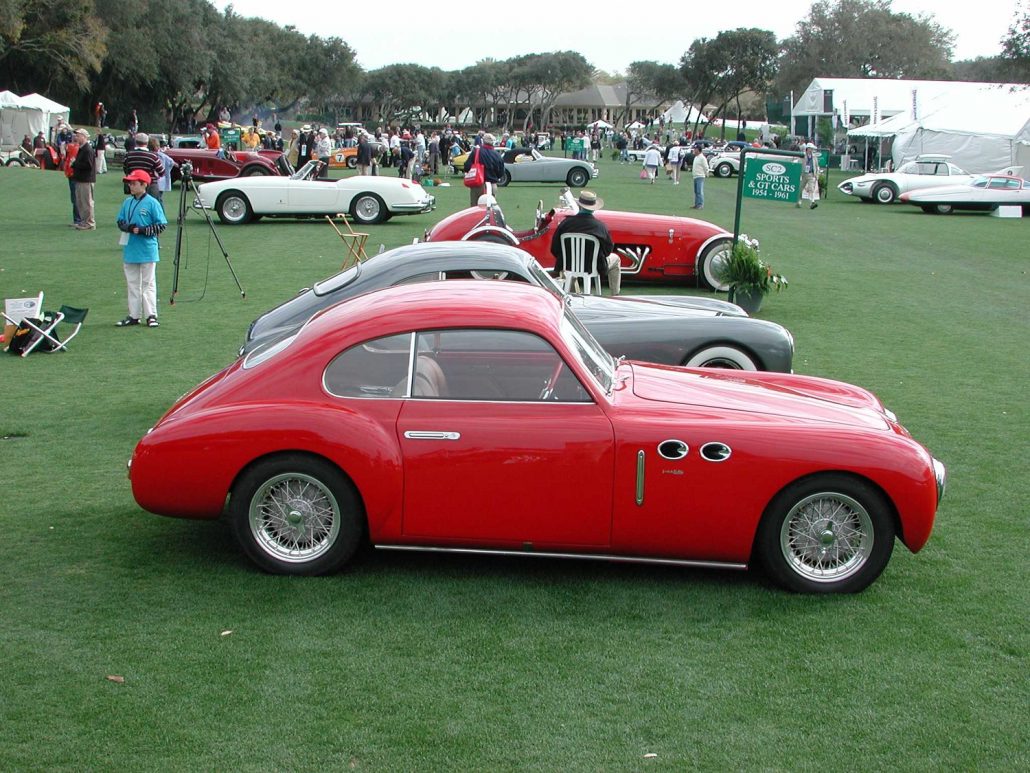 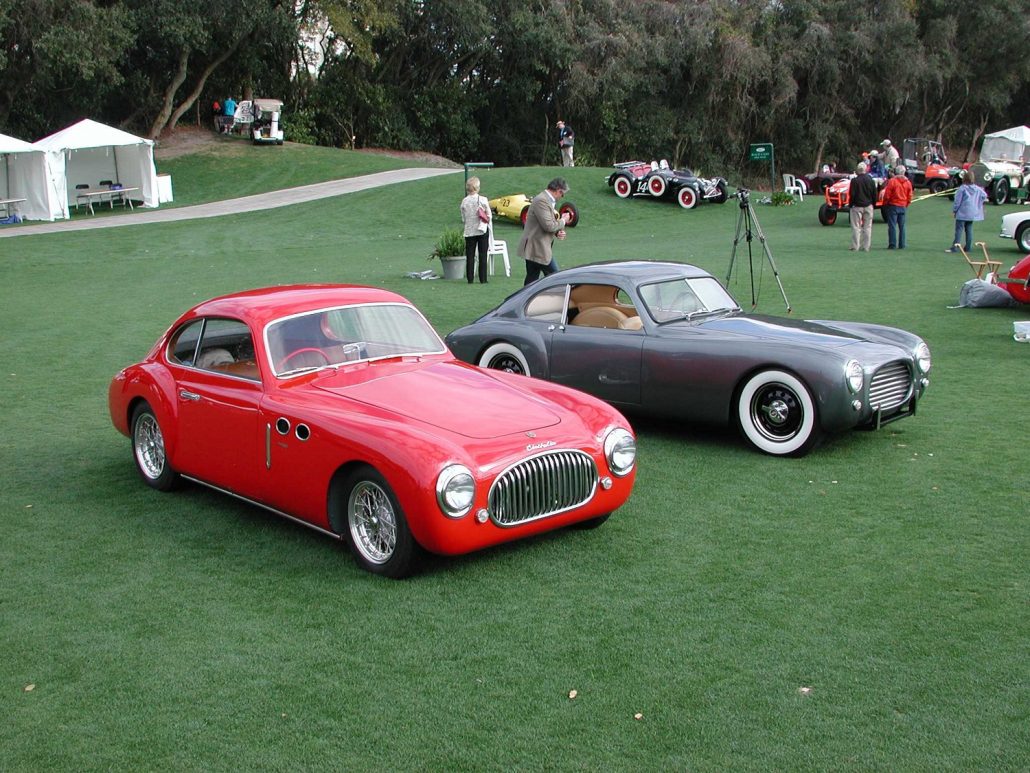 We asked Dan Palatnik to help guide our work with his renderings – as we’ve done on most of our restorations.  As usual, Dan hit the ball out of the park and beautifully shows the lines of the car – perfect for our upcoming brochure. 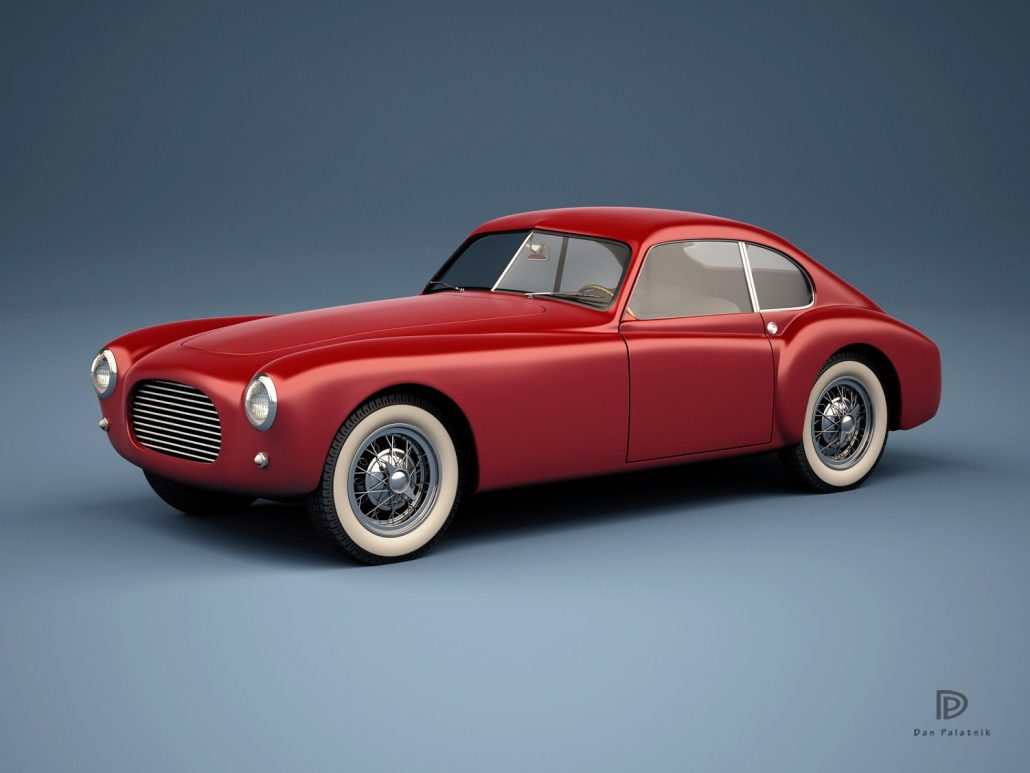 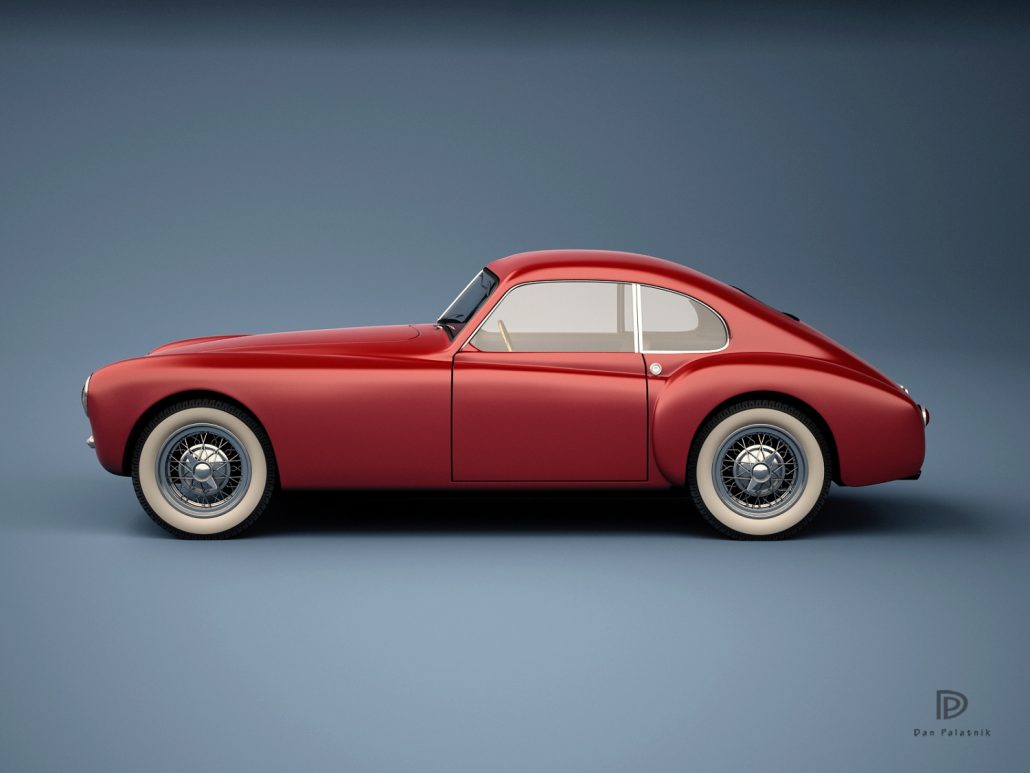 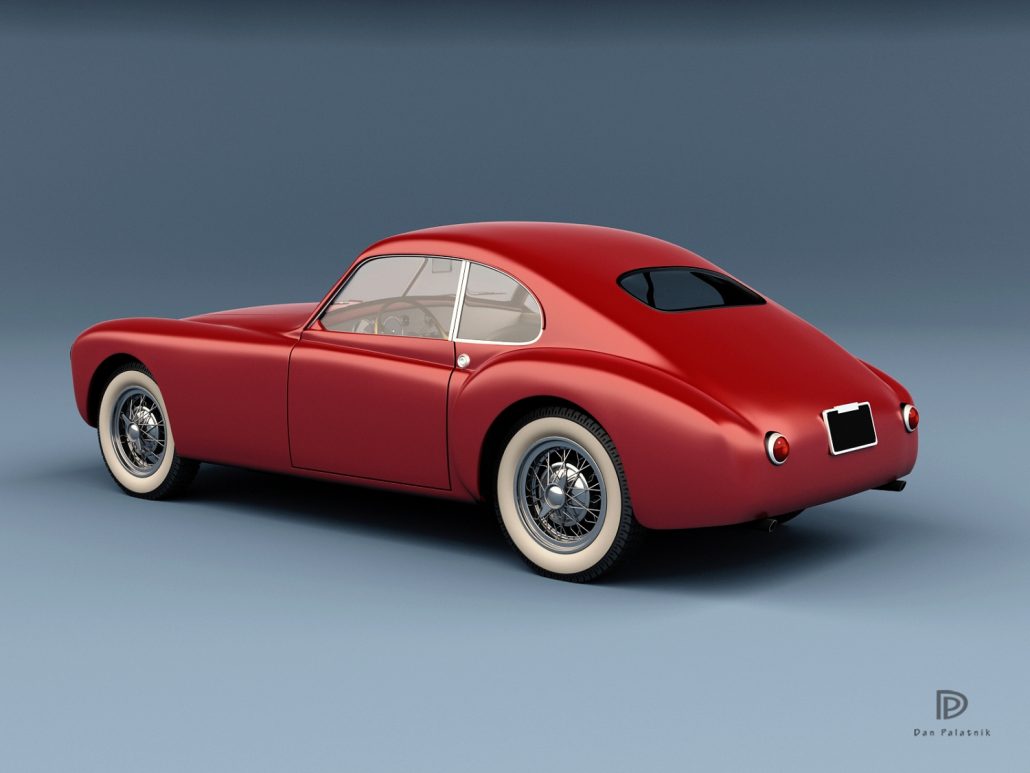 We’re also planning to create a second version of the Allied as did Burke and his team – a roadster.  See below for a vintage photo of an Allied Swallow roadster and Dan Palatnik’s renderings of a finished car. 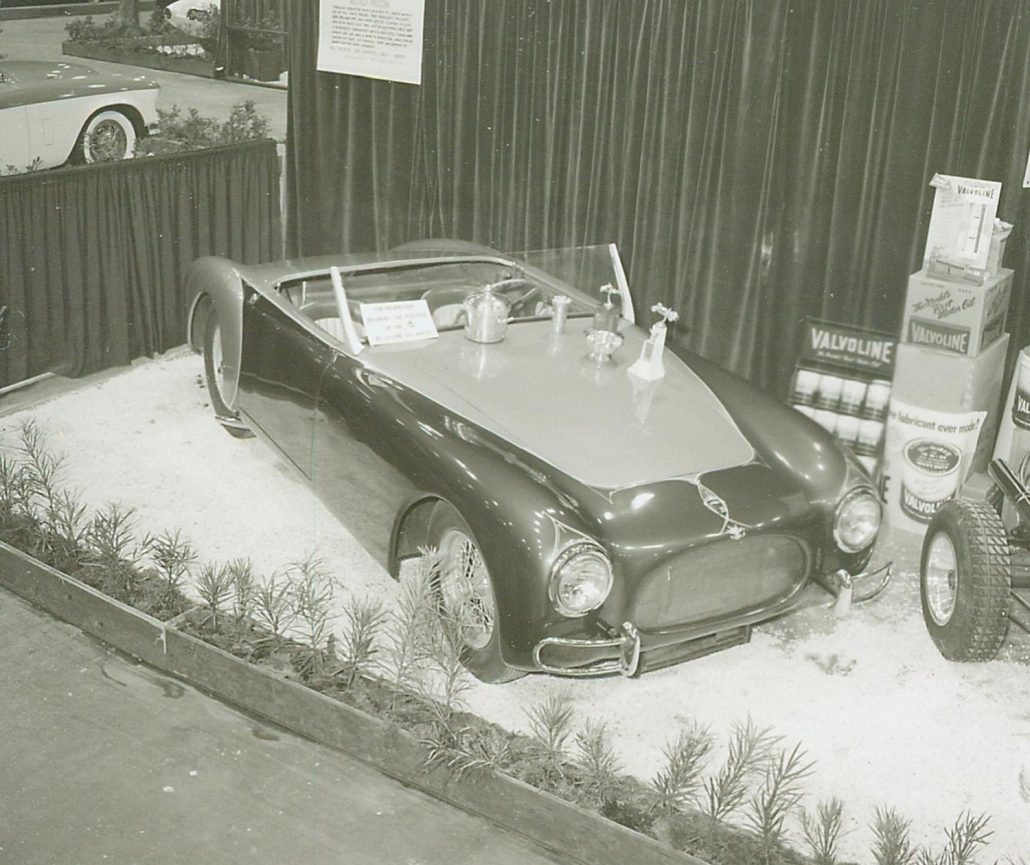 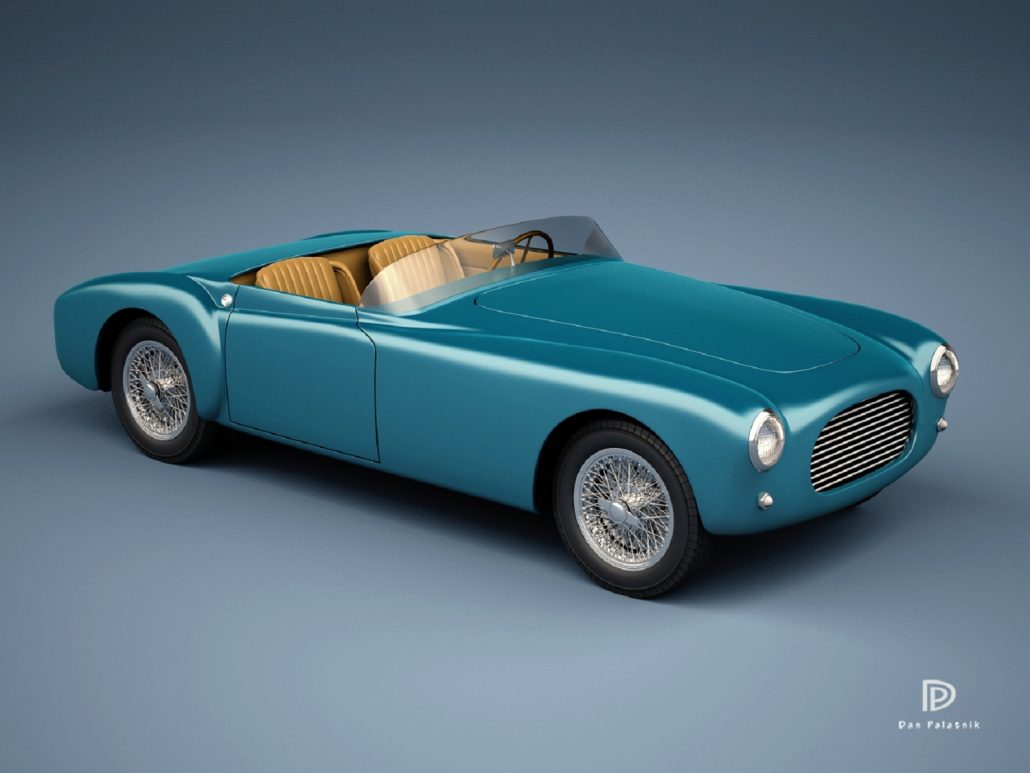 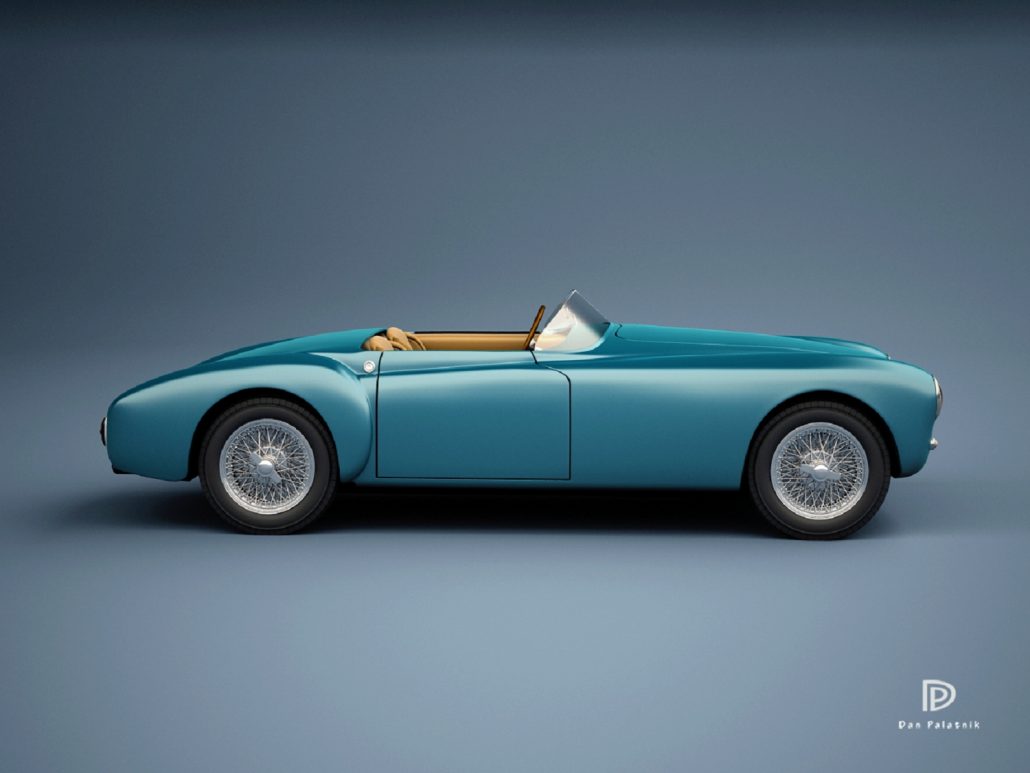 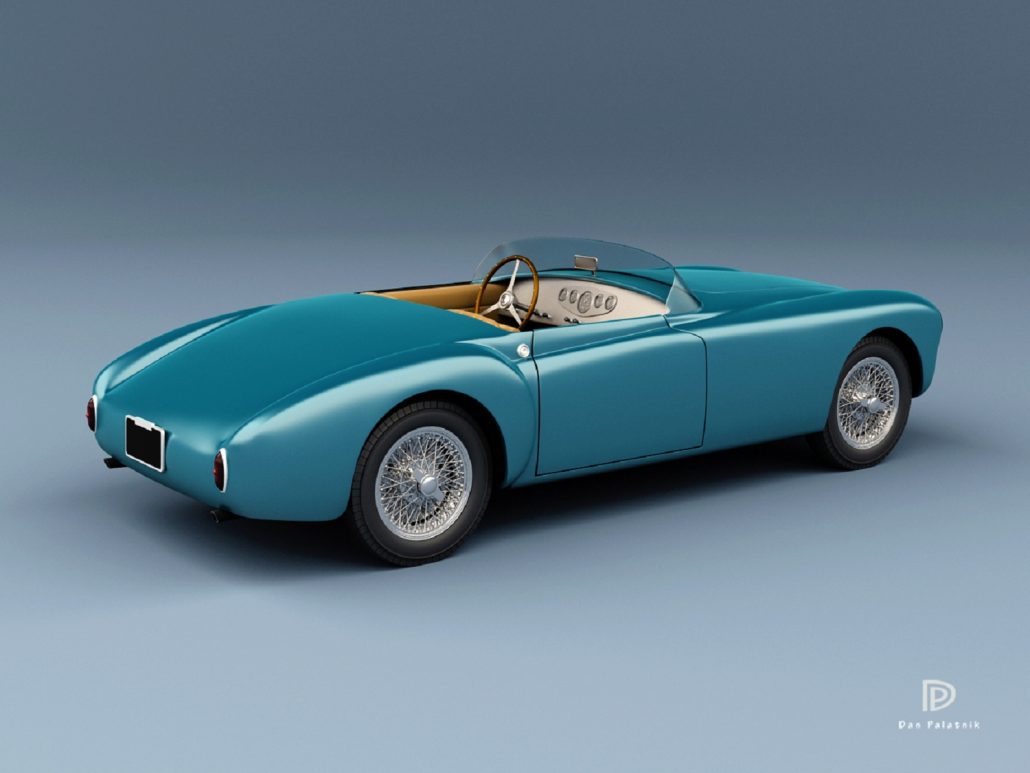 When we finish the mold for the Allied Swallow, we’ll have molds for 7 vintage bodies in the can.  Currently we have 4 bodies which have a 99″ wheelbase (about the size of a vintage Jaguar XK 120).  These include the Byers SR-100, Sorrell SR-100, Bangert Manta Ray and Allied Blackhawk.  Our other 2 bodies are about the size of an MG and include the CRV Piranha and the Covington Tiburon Coupe. The 7th mold will be for the Allied “Cisitalia” Swallow we’re discussing today.

Here are some related articles about some of the new bodies and sports cars we’ve brought to market:

The Allied Swallow body has a 94 inch wheelbase and fits nicely on a vintage MG chassis or similar, and we’ll post additional information to share as we make progress.  And for those of you wanting to learn more about the history of Allied Swallow sports cars in America: