A Woodill Wildfire with Buick body modifications?  Headlights, taillights and perhaps even more.  And we’ve found several of these.  How could they exist and what does it mean?  Let’s dive into a bit of history with a recent question sent to us at Undiscovered Classics.  As with most research questions, it’s best to start at the beginning.

When you look at the early history of fiberglass sports cars in America, the path is far more complex and in many ways – exciting – than you might image.  Recently I was contacted by Michael Rhodes, Automobile Portfolio Director of Evergreen Historic Automobiles in Lebanon, Missouri.  Michael was asking for help researching one of the cars in their collection – a 1954 Woodill Wildfire that used Buick headlights, taillights and drivetrain.  Check out the photos below. 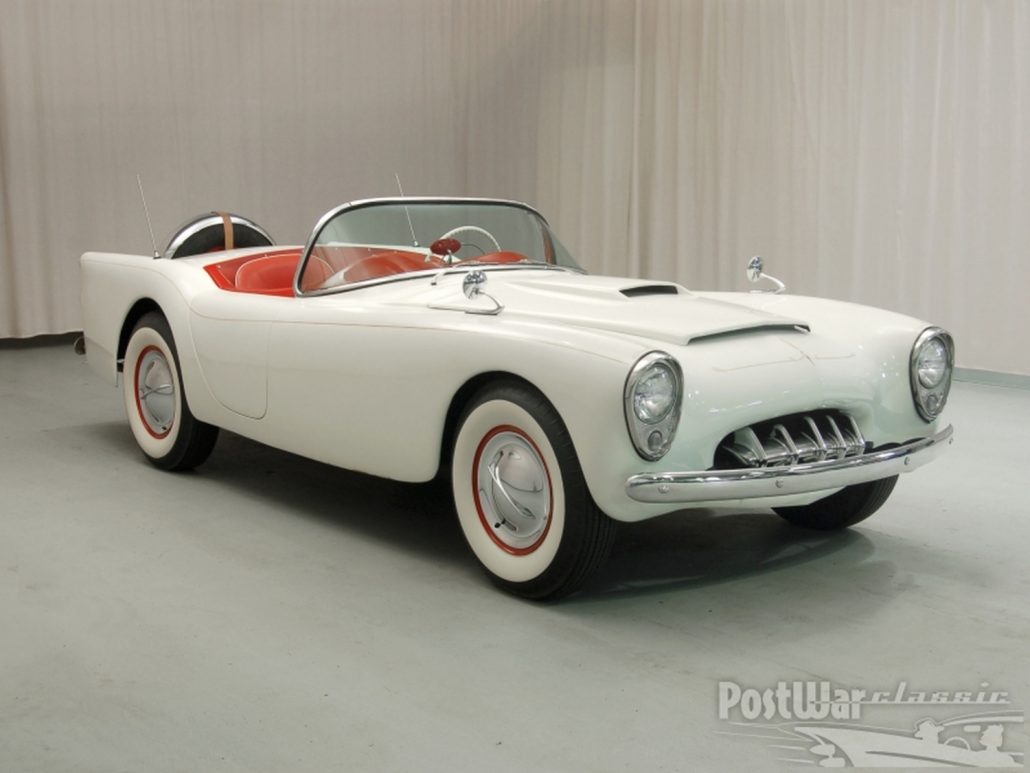 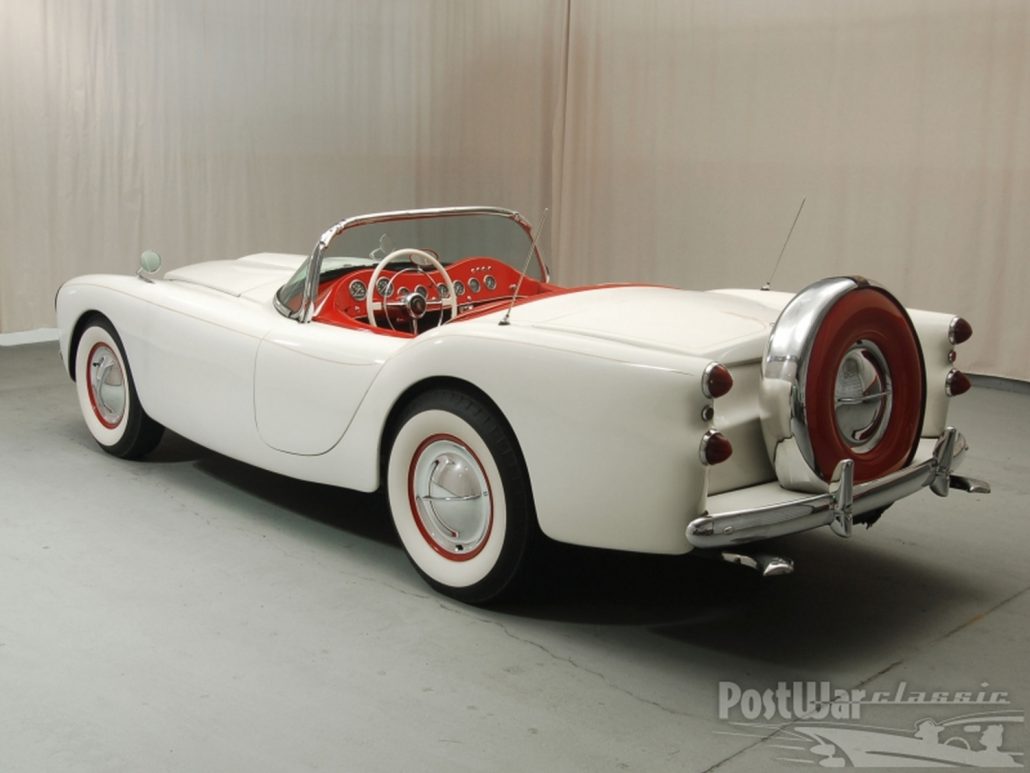 I had seen the car before when it was being marketed by Mark Hyman, and I was always impressed by its condition and its history.  Michael’s request for help with research got the wheels in motion, and in order to understand the potential history of this Wildfire, it’s useful to dig a bit deeper and share some of what was happening with these American fiberglass specials back then.

When Bill Tritt gained notoriety for producing one of the first fiberglass sports car in America, opportunities around this new market “niche” abounded.  Tritt was called upon by Harley Earl of GM note to consult in some aspects of the production of fiberglass car bodies, and  below is a photo of Bill Tritt (center) talking to Automotive writers during one of these Detroit visits about his fiberglass sports car.  Exciting times for those involved indeed! 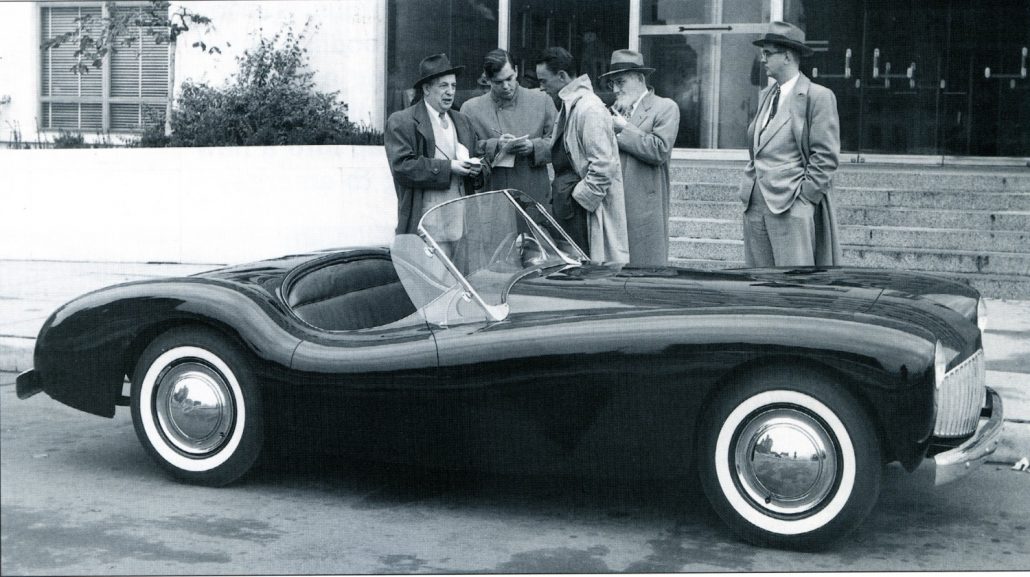 But it wasn’t just Detroit that was interested.  Other companies looked at using the Glasspar bodies to create their own line of sports cars.  Some using the body exactly as built and others with modifications.  Some of these companies included Paul Strassberger and the “Yankee Clipper,” Gerald Banning and the electric Mota and Ferro Corporation and “Fiberflash” to name just a few.  Tritt also had ongoing conversations to produce a fiberglass sports car with Studebaker (Glasspar Ascot was planned to be the Studebaker offering) and Healey (mostly automobile parts).   See photos below. 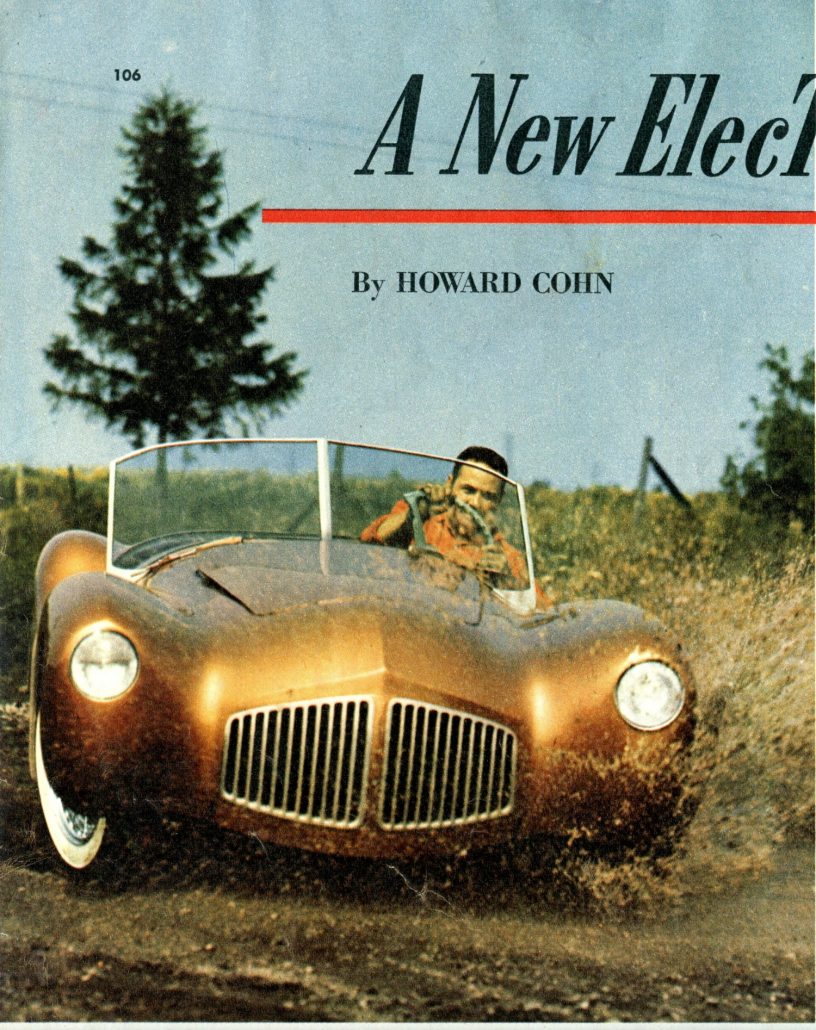 Shown Here is Gerald Banning and his Bronze “Mota” 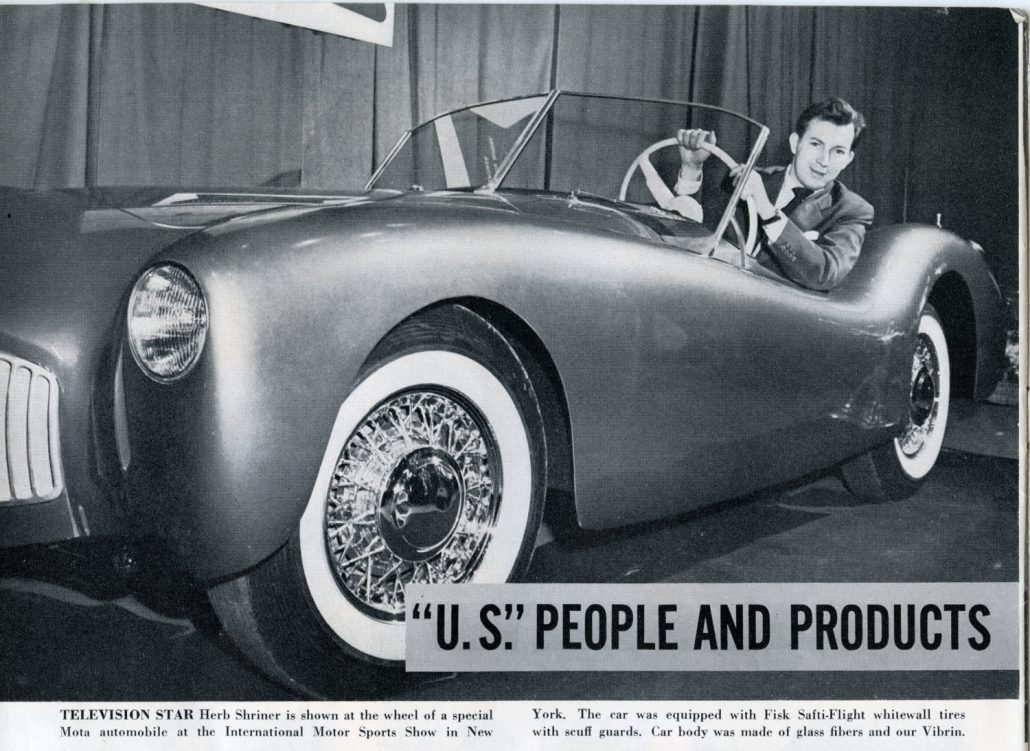 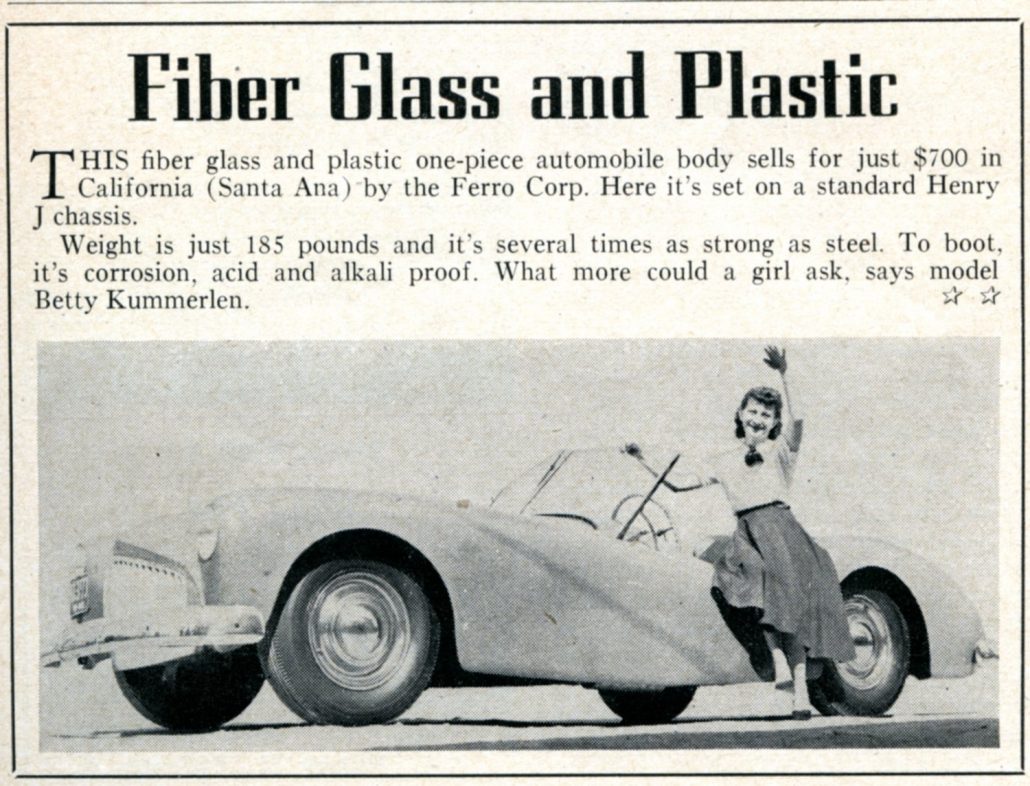 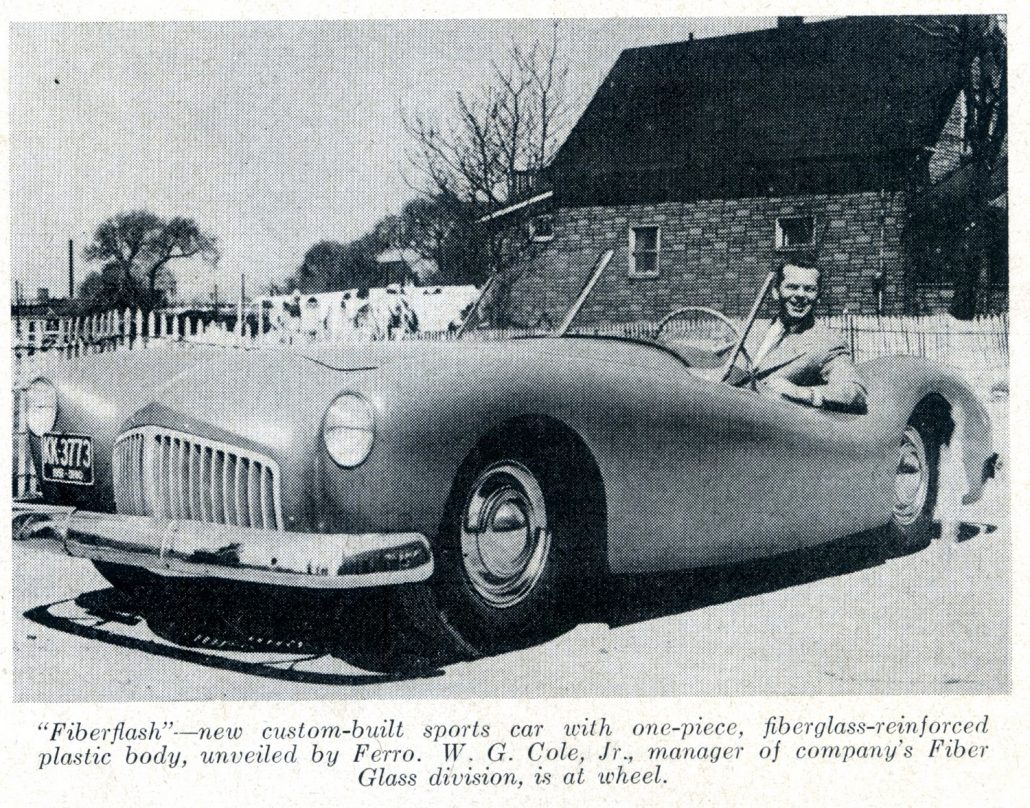 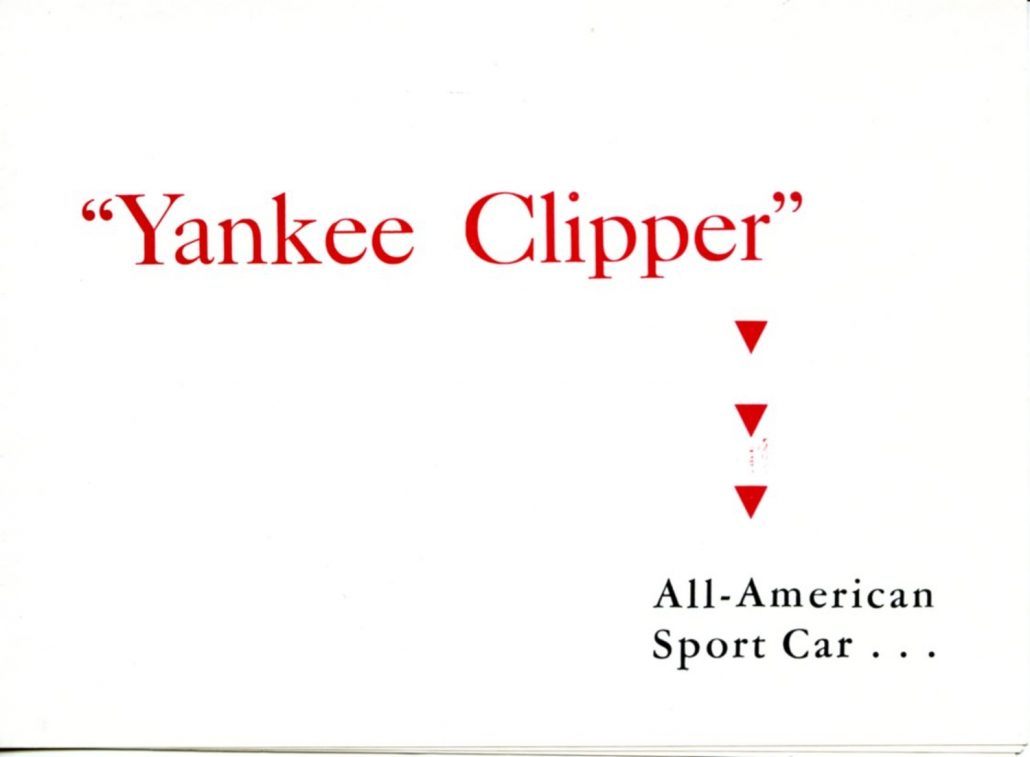 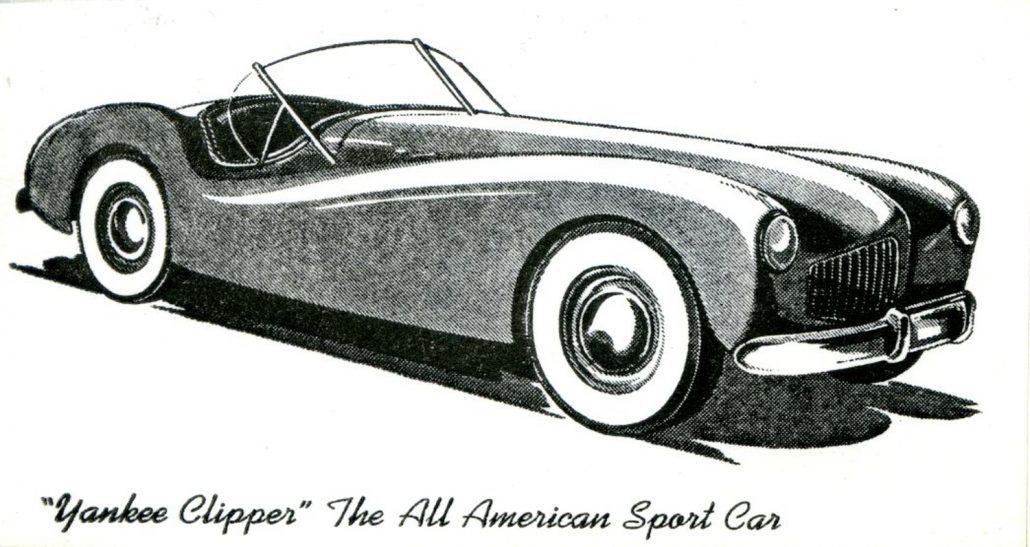 Automobile Dealers also promoted and built their own Glasspar G2 sports cars.  Some built more than one, as you’ll see below.

And several Glasspars were built with Nash grilles – perhaps initially intended for Nash dealers such as the one shown below built by Mike Ricker who owned a Nash Dealership in Whittier, California. 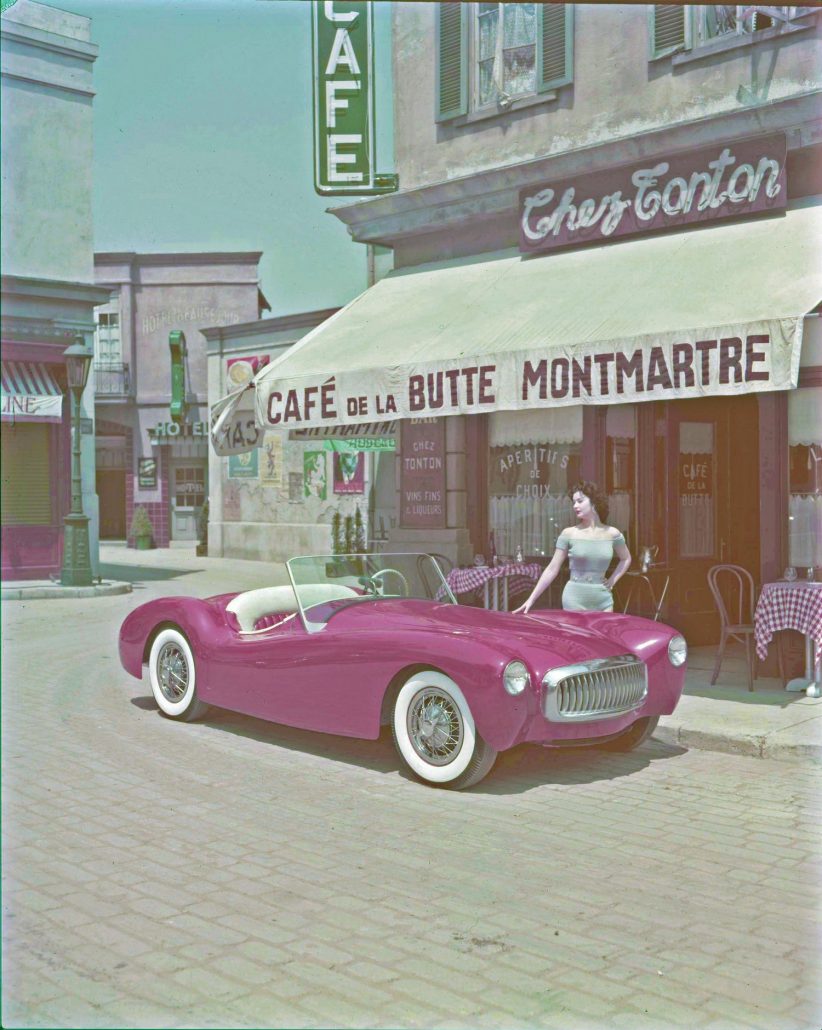 The Woodill Wildfire has a similar legacy as Glasspar.  The Wildfire was designed and built by Bill Tritt of Glasspar for B.R. “Woody” Woodill of Downey, California who was a Dodge/Willys dealer. Initially in 1952, Woody used a modified Glasspar body and Shorty Post frame with Willys mechanicals to create a proposal for Willys to adopt as their own sports car.  See three photos of this car below. 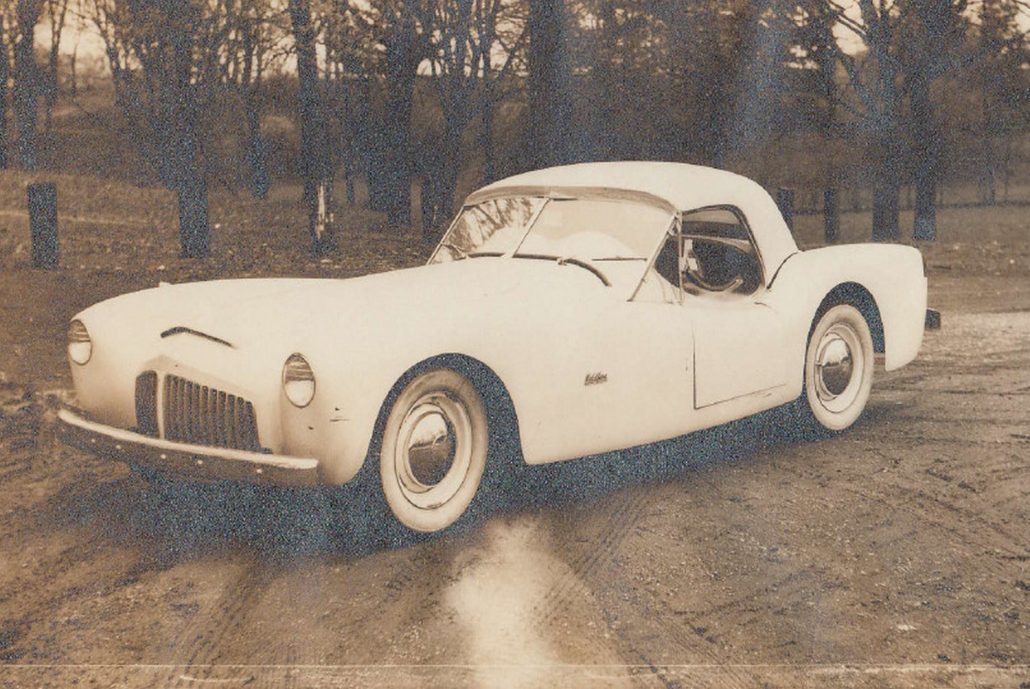 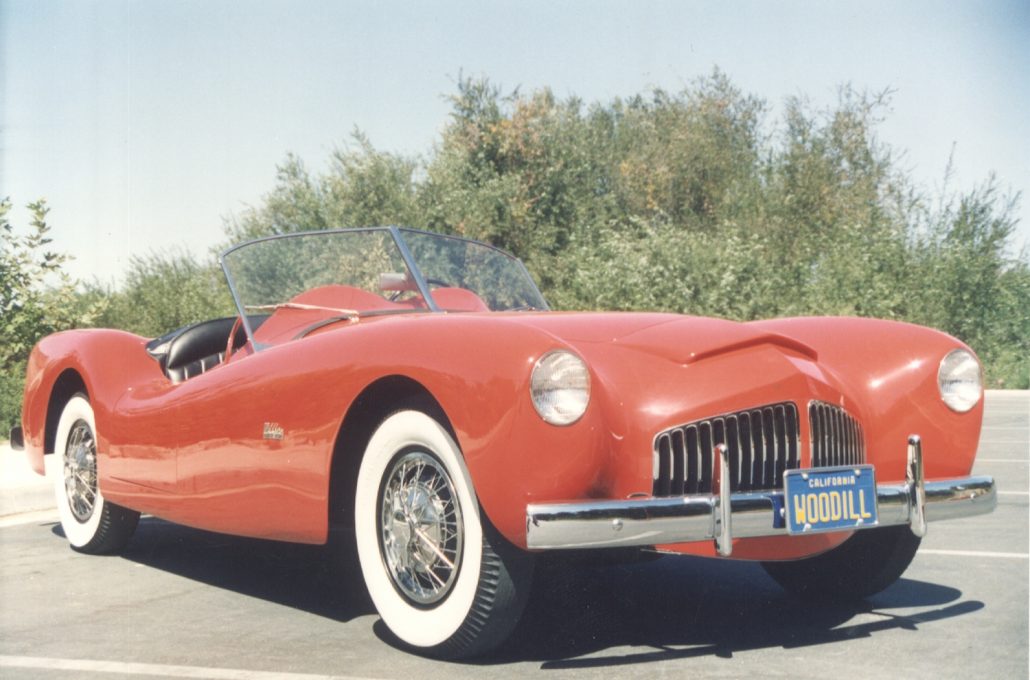 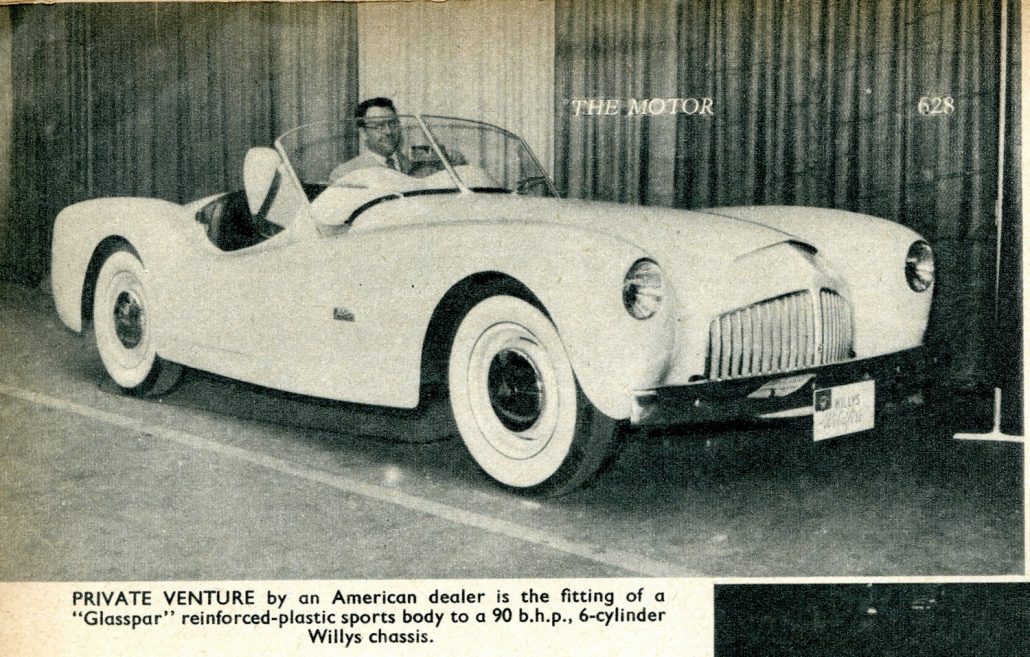 When Kaiser and Willys merged and went with the Kaiser-Darrin as their sports car, Woodill switched gears and began to rollout the new Bill Tritt Wildfire design in 1953 as shown below.  It went to to be used in movies such as the “Johnny Dark” released in 1954 and other movies too. 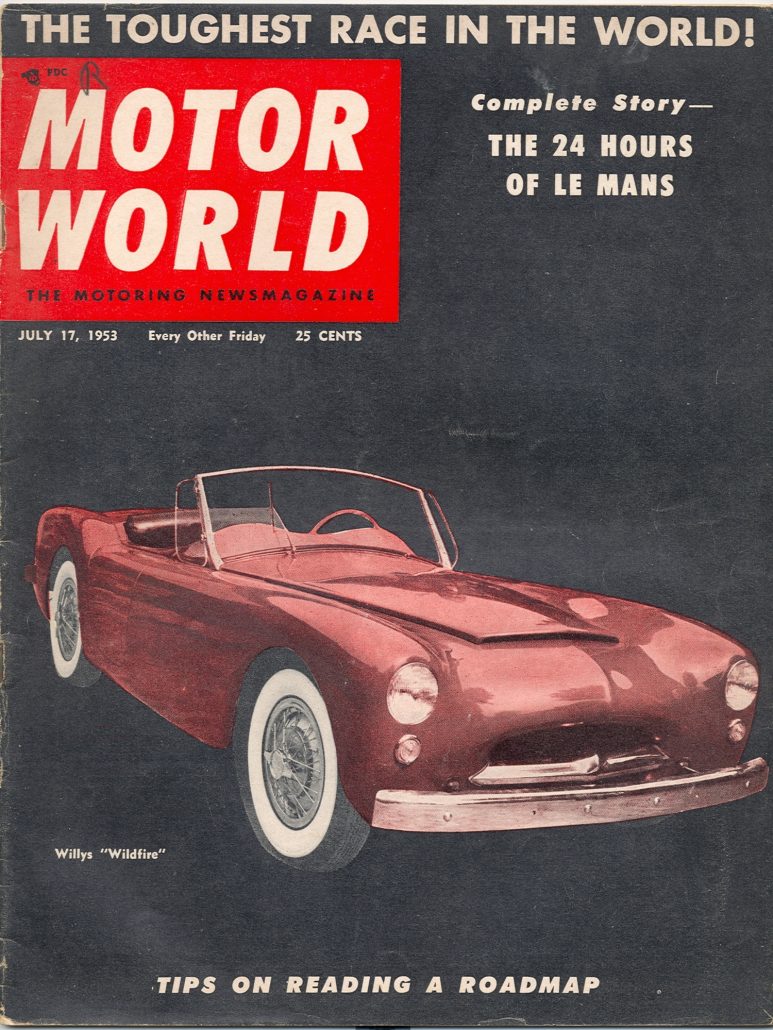 As with Glasspar, Woodill had a similar history and several dealers started to look at building their own Woodill Wildfire sports cars using the Wildfire body.  One such dealer may have been a Buick dealer near Los Angeles in Compton, California.  Let’s take a look at more detail on this car.

The first Woodill Wildfire we’ve found in vintage magazines that was modified with Buick parts was featured in a two-page article that appeared Motor Life Magazine in October, 1954.  A teaser photo of it appeared one month earlier in the magazine, and appears below. 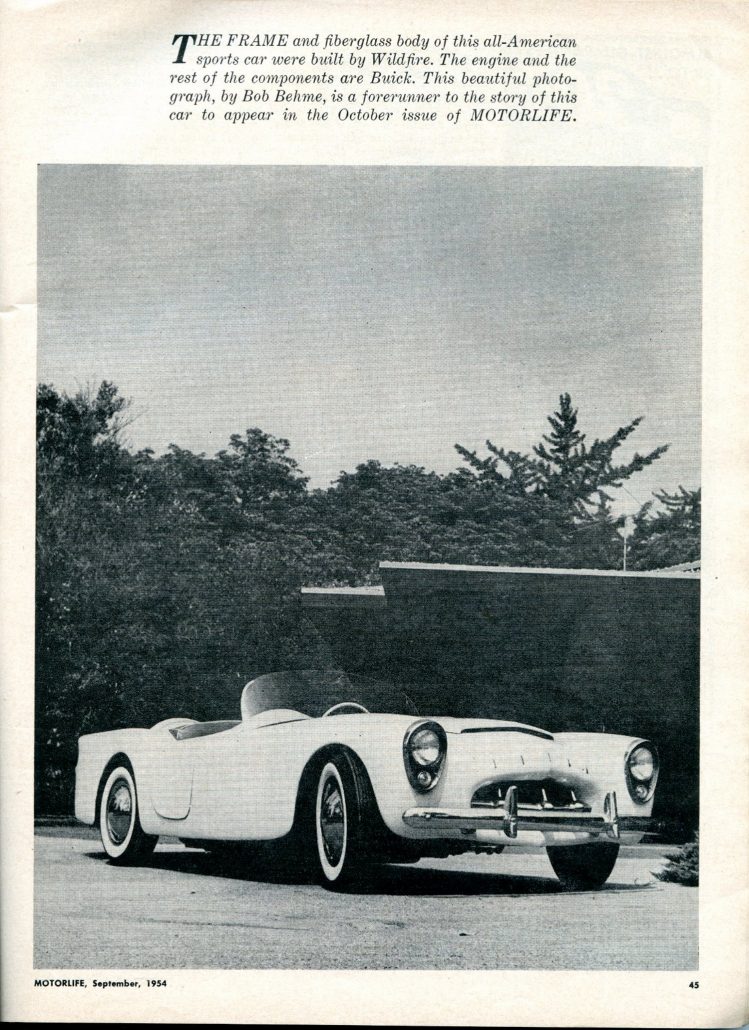 The full article with more photos can be seen with a discussion of the Wildfire on our website.

To make it easier, let’s take a look at the seven captioned photos that appeared in the article.  And by the way, I love the first image – a drawing of the same Wildfire.  Very cool. 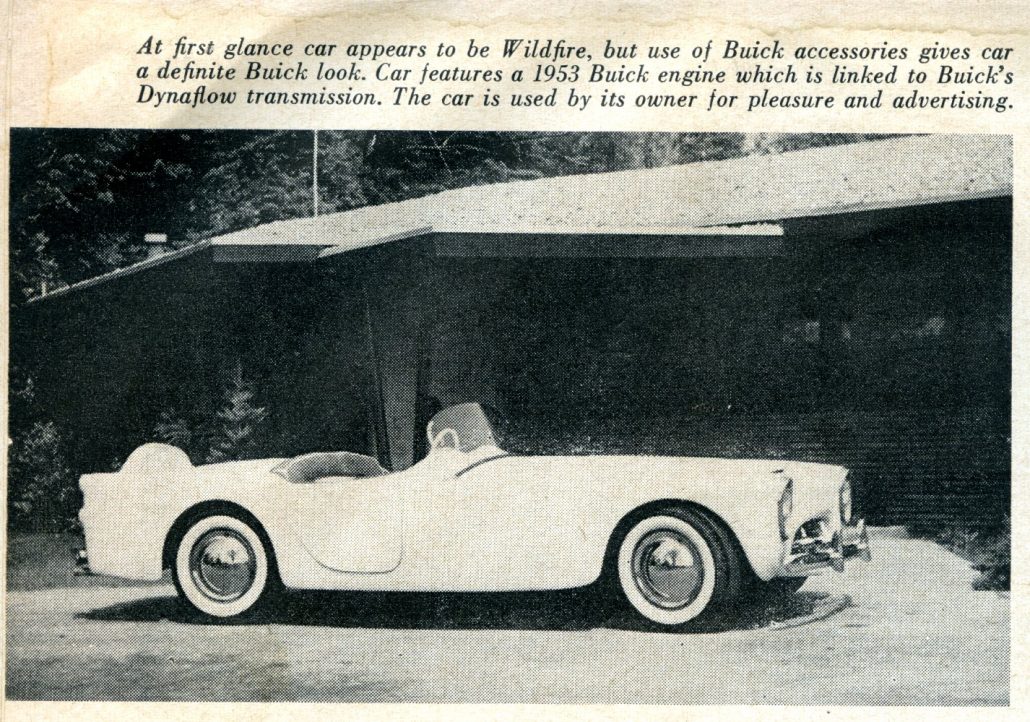 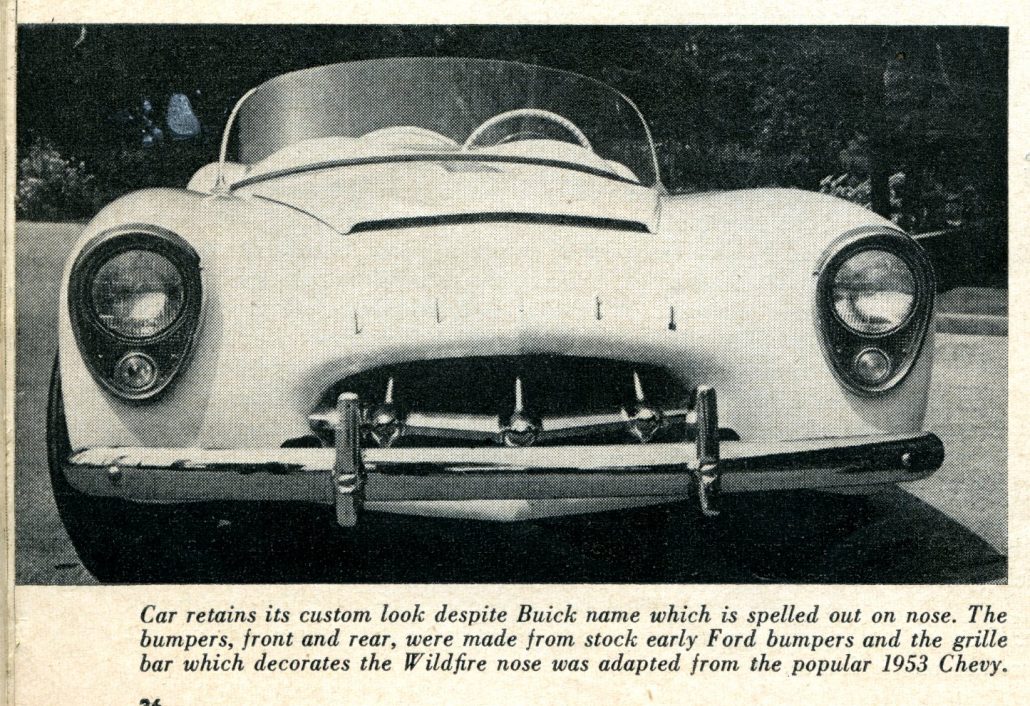 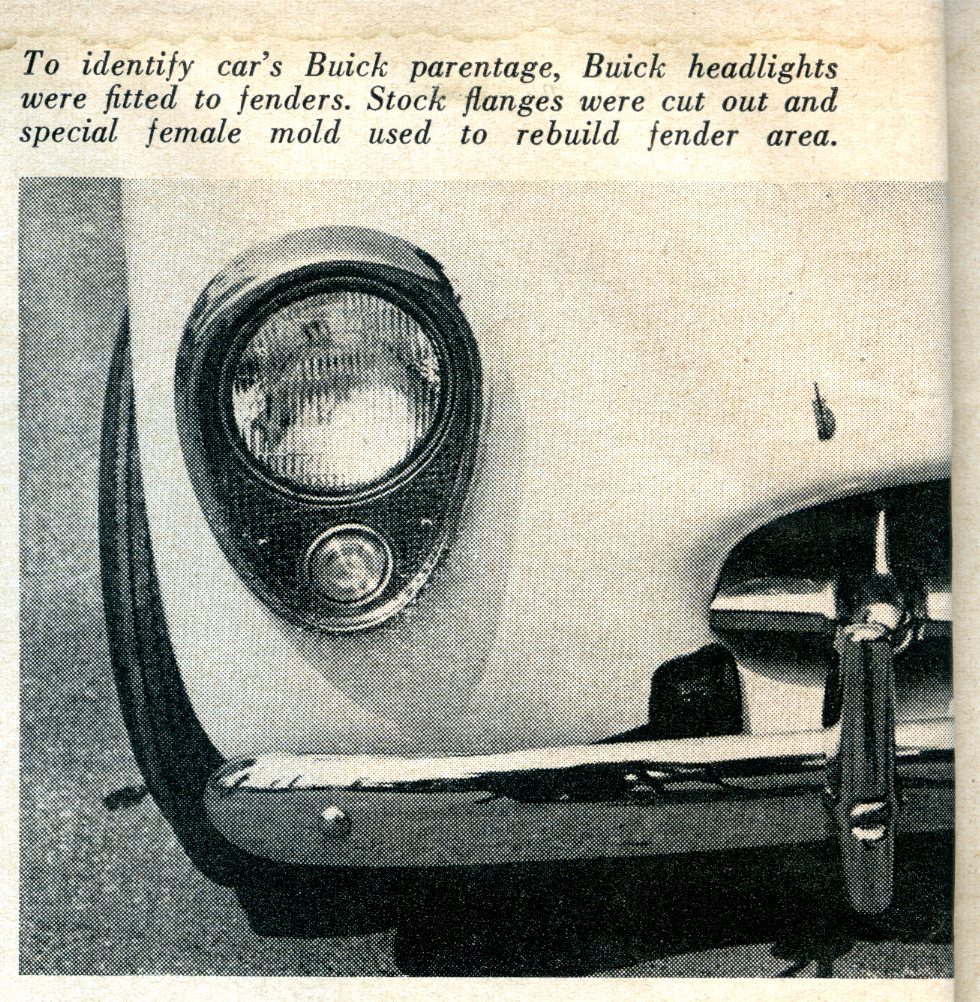 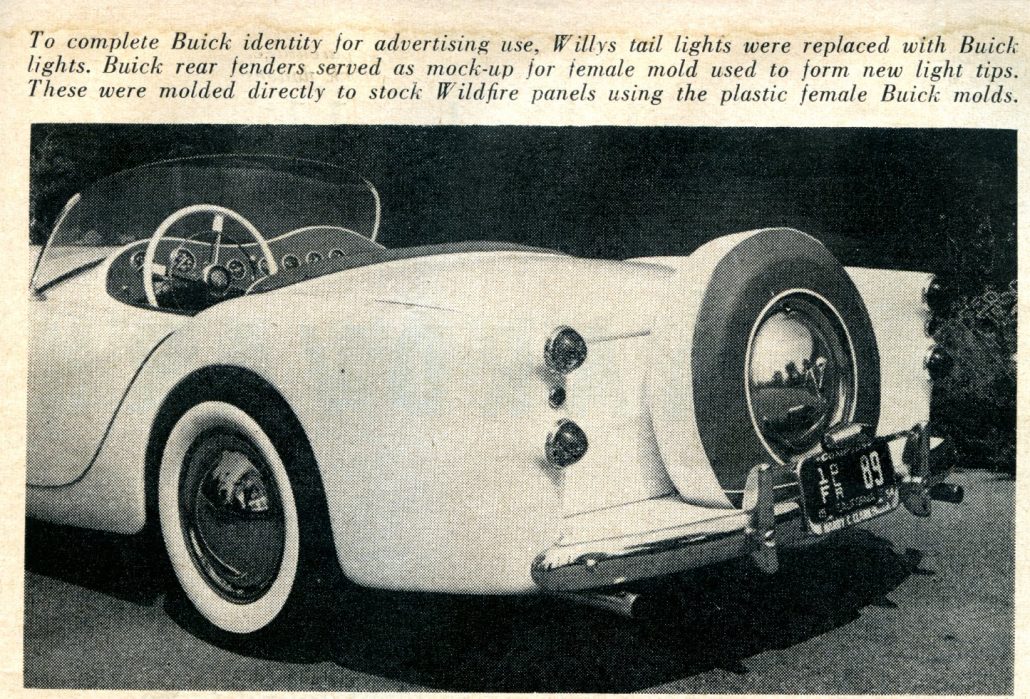 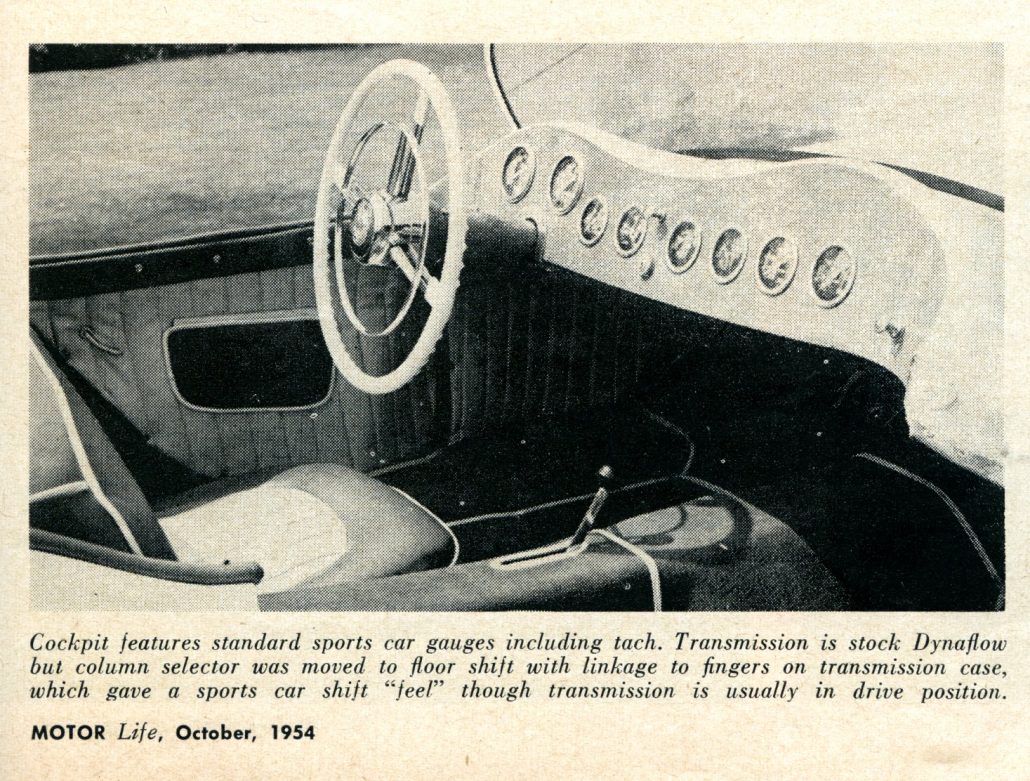 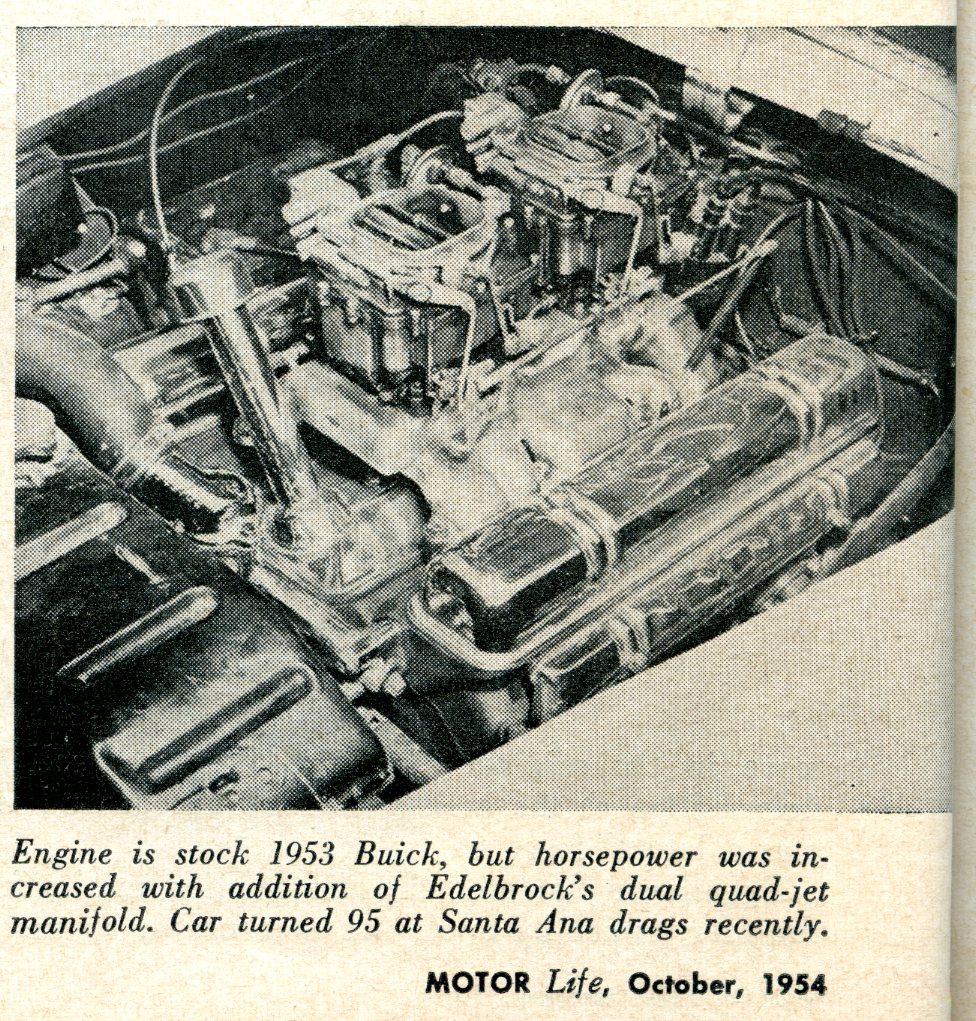 It’s worth taking the time to read each of the captions on the photos above – especially the last photo caption which shares that the “car turned 95 mph at Santa Ana drags recently.”  That’s interesting because we have access to those race records and many of the photos. I bet with a bit more work we can find some photos and confirmation too 🙂

Confirming the identify of a car that exists now in 2019 to a car shown in 1954 requires a series of comparisons and confirmations.  No doubt that many things can change over 60+ years so we always hope there is evidence (sometimes under the bodywork) of what was there to confirm original identities of cars.  We’ve done this several times including the validation of both Woodill Wildfire sports cars that appeared in the Johnny Dark film.  It’s never easy, but it’s always worth the effort.

On this car it looks like much has remained identical assuming the modern and vintage cars are one and the same.  The dash has few modifications, the shifter is located exactly as in photo – even the seats and the door panels appear the same.  I wish that was always the case to confirm, but it looks like this car has been kept in very nice condition all of its life.

From photos it appears that parts of the engine (valve covers) may have changed, but the radiator is still massive and still there.  I always look for a “convergence” of data and in this case, many of the unique characteristics of this car are found in exact or near exact condition when compared to the vintage photos.

Who Is Jim Twombly?

In the previous article on this car, you’ll see that I assumed that Jim Twombly was the name of the Buick dealer in Compton, California.  Well….a bit more research and I found the following information on an “ancestry” board.  Click here to see this link/information.  Here’s what the link says:

Did you know my uncle Jim Twombly of the Harry Clark Buick Agency?
He was born in Compton and was very active there for years….

So…the name of the Buick dealer in Compton was “Harry Clark Buick Agency.”  Armed with this information we went thru some of the Wildfire records (I call these the Frank Cornell archive after our Woodill Wildfire leader who researched Woodill Wildfire sports cars for decades) and I found this:

And while this helps to clear up some of the questions… it raises some questions too.

So….much has been confirmed yet questions remain and research too.  Such as:

And by the way….there are differences between the cars too:

So it could be two very similar Buick Wildfires were built – maybe at Harry Clark Buick.  Or maybe more.

So we’ve answered some questions but raised others.  That is the usual process of research gang.  It keeps us busy and believe it or not we often find it fun 🙂   We’re going to run some more stories about these “Buick Wildfires” since we have found several.  And I’ll plan on doing stories on the “Nash Grille” Glasspar G2s.  Perhaps by looking at these cars as two groups, we’ll learn more about them and their history as part of the larger marques of Glasspar and Wildfire.