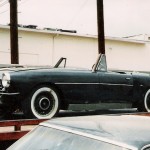 Beautiful Profile of the Gisler Special

Scott Perrot is the friend…..  I almost never had.  About 2 years ago, I started making trips across the country – both with my research compadre Rick D’Louhy and without him -when my adventures might turn into a walkabout.  The average number of days for a trip when Rick and Geoff collaborate on driving is 7 to 10 days, with an average mileage count per day of 300 to 500 miles.  When I go on my own, I think I make an average of 50 to 100 miles a day, and the number of days is measured in weeks – sometimes months.  Rick and I certainly bring together different styles of driving.

So…. my first cross country, fiberglass researching, people meeting, car finding, museum visiting trip by myself was in the summer and early Fall of 2008.  I started from Sacramento California and headed north (that’s a whole different story), but I was going to meet the Dawes family (again) from LaDawri, Don Edmunds who designed the Cheetah and other race cars, and a cool group of car guys in the Northwest / Portland Oregon area.  Scott Perrott was one of those guys. 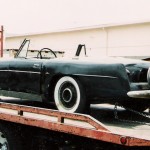 Back end is Styled Gracefully Too

My time in Portland was about 5 days.  I was visiting with the Powell family (who were on vacation visiting family), picking up a car, meeting a fellow historian about early hot rod catalogs and brochures, and reviewing parts of the Strother MacMinn photo collection which is owned by Bob Ames and managed by Dale LaFollette.  Lots to do.  Although I’ve gotten better at time management along the way, I certainly was at my infancy at how to do so then.

Scott was very patient as I rescheduled and rescheduled and rescheduled our visit.  But when the time finally came, he was gracious and welcomed me as graciously as anyone could expect (but he did tease me for my less than perfect time management skills…which I did deserve).  When I finally had a chance to visit with him and review his cars, collection, and memorabilia – it was absolutely wonderful.   Scott has a collection of unique and interesting cars – like none I’ve ever seen.

Scott owns some historically significant hot rods, sports cars, and drag cars.  One of these uses a Bangert Manta Ray body – one of only 3 known bodies to exist.  The car is a famous drag car from the Northwest called the “Kennedy Special”.  It’s one cool car!  He has other neat cars too, but the reason for the story today is to share another “Mysterion” with you.  One of you may be able to help with its history. 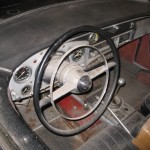 As we continue to develop the “Mysterion” name for the class of cars whose heritage remains unknown, it’s probably good to expand it to cars that are more than just fiberglass.  There are plenty of mystery race cars out there, but the cars I see called Mysterions by our website are of a relatively ignored genre – the mystery sports car genre.  So, with the introduction of Scott Perrot’s aluminum “Gisler” Special – based on a Kaiser platform – we expand our “Mysterion” classification one notch forward.

As you peruse the pictures in the gallery below, you’ll find that most of the components from drive train, chrome, and accessories are Kaiser.  Scott and others have checked with the Kaiser Enthusiasts Group and no one has seen or heard of this car before.  The car was found in the Los Angeles area and was in a garage for years without any additional information stored with the car.  When Scott bought the car, there was an intriguing trophy or two that came with the car, but again no stories, names, or heritage.  Only the name on the nose of the car that says “Gisler”.

Based on the design lines of the car and similarity to the Victress S4 design, I would estimate the design occuring in the 1953-1954 era and the build between 1954-1956 – but that’s just a guess on my part.  There are far more educated and sophisticated designers out there in our group, and we would all appreciate learning from your thoughts on this car.

So…. the call goes out to all the historians and researchers out there.  How could such a beautifully appointed sports car, in a Kaiser theme, have lost its heritage?  It’s the reason why we created the new marque “Mysterion” to capture these historically relevant but ignored sports cars.  These are often beautiful sports cars in need of research and historical review. 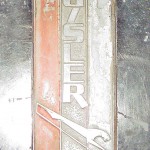 I should note that Wayne Graefen remembers seeing the car – in exactly the same spot that Scott later found it, so I’ll have to leave it to Wayne to post in the discussion forum for this story what his memories are.  And thanks very much to Wayne for sending the 3 pictures of the Gisler on a trailer – these are the only pictures I have from a distance where you can more easily appreciate the design of the entire car.

Scott….you’ve got a great car there in your collection, and a thankful new friend (me) that still appreciates the patience you had with me on the first week of my trip in the not too distant past.

Go get ’em gang, and let’s hope we can find some history for Scott on his car. 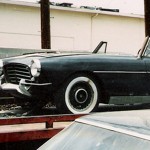 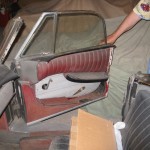 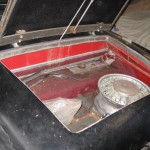 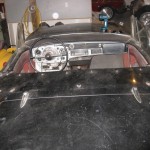 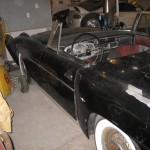 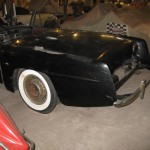 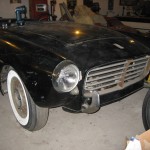 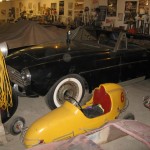 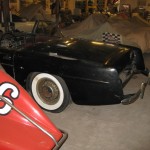 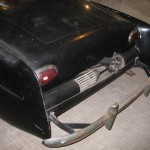 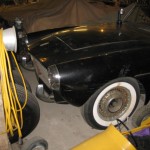 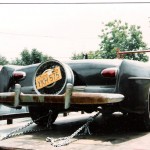 Back end is Styled Gracefully Too

Beautiful Profile of the Gisler Special