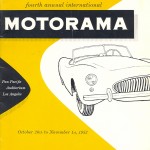 One of the best kept secrets of the 1950’s is that there were actually two different Motorama’s making news across the country.  When we hear of the 1950’s Motorama – we think of GM’s Motorama.  Concept cars, new models….fun fun fun.  But the best kept secret is that another really cool Motorama was actually being held in California and other locations across the country by Petersen Publishing.  I’ll share with you my reasoning, in just a bit.

Robert Petersen started his Motorama series in 1950 at the Shrine Auditorium.  It was held there just one year, and from 1952 thru 1955 it was held at the Pan Pacific Auditorium in Los Angeles.  The location choice caused confusion and this is part of the reason that the Petersen Motoramas are not remembered well today.  First, both events were called “Motoramas”, and they were held at a similar time of year – the Petersen Motorama in November and the GM Motorama very early in the new year.    What further caused confusion is that after 1950, both were held in the same location – the Pan Pacific Auditorium. 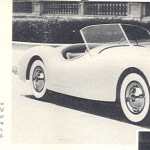 For those of you interested in the GM Motorama, here’s a website to give you a bit of an overview of the locations and name changes it went thru:  GM Motorama   The Petersen Motorama was held each year from 1950-1955, with a name change occuring in 1954 and 1955 to the “International Motor Revue.”  So…there were two Motoramas…..what’s the big deal – just twice the fun…right?

I love the history of the GM Motorama.  The concept cars and pictures and events were world class in every way.  But they were created by one company with one vision – GM and Harley Earl.  What a visionary he was and created some of the most exciting cars ever seen.  For those of you who enjoy his work, here’s a great website that celebrates Harley Earl’s vision: Click Here

But what if you weren’t Harley Earl – but had a fabulous concept as well?  What could you do?  Debut your creation at the Petersen Motorama – that’s what!  The Petersen Motorama celebrated individual accomplishment.  I think of it as the “People’s Motorama”.  Sports cars, custom cars, hot rods, lakesters, belly tanks, boats, motorcycles – anything and everything that a competent designer and a creative builder could create.  And California was not wanting for creativity and enthusiasm during this era either. 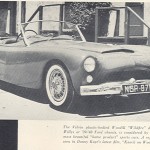 Woodill Wildfire Made an Appearance – and Gave One Away!

From 1951 thru 1955, the Petersen Motorama was the best friend of the fiberglass car creator.  Glasspar, Woodill, Allied, Skorpion, Wasp, Sorrell, Grantham Stardust, and Victress – these are just some of the names that appeared and debuted each year at the Petersen Motorama.

I’ll be sharing more stories of each of these events as we move forward on our website, but our first story comes courtesy of Terry Baldwin of Ventura California.  Terry contacted me not long ago and shared his memories of attending the Petersen Motoramas on several occasions.  On one occasion, he mentioned they gave away a Woodill Wildfire during the event.

What?  I’ve not heard that before.  How interesting… 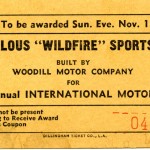 Wow! One of the last Free Giveaway Wildfire Tickets from the 1953 Petersen Motorama

And then…days later he shared the tickets he still had from this event – 3 tickets – that might have resulted in him winning a Wildfire as part of the 1953 Motorama.  And… a business card from Bill Grantham of Grantham Stardust fiberglass sports cars.  Very very cool.  I’ve looked for more evidence of this event happening and bingo, this year I found it in the November 1953 issue of Motor Trend – an article about the Motorama discussing the intention to give away a Woodill Wildfire Sportscar.  And a mention of Victress building a fiberglass S1A during the event.  The research hunt goes on.  What a show this must have been…

I hope you enjoyed the short review of the show, and look forward to posting more stories and information about each of the Petersen Motoramas in the coming year.  And, thanks again to Terry Baldwin for sharing such neat items from a time so long ago.  Way to go Terry!

And who did win that Woodill Wildfire gang?????  Anyone want to help on a bit more research??? 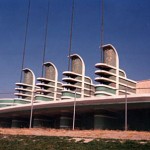 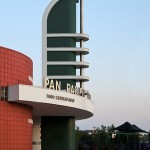 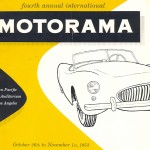 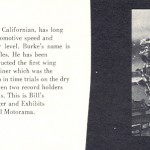 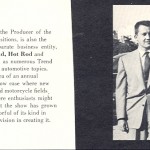 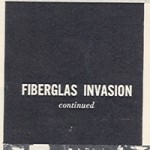 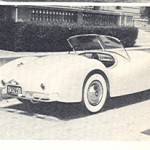 Woodill Wildfire Made an Appearance – and Gave One Away! 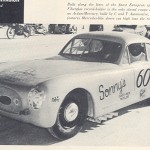 Wow! One of the last Free Giveaway Wildfire Tickets from the 1953 Petersen Motorama 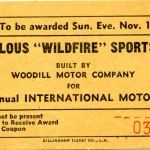 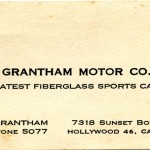 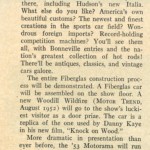 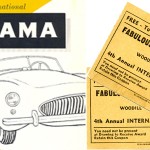