Today’s story is a follow-up article about a very interesting car we wrote about back in 2011 – the Kelly Buchanan Singer Special.  Back in 2011 we outlined what we knew about the stylish Singer Special and shared a 1954 article on the car from Car Craft Magazine.

Today’s article comes from good friend and Singer historian Peter McKercher.  Peter has been tracking information about this car for many years and perhaps some of you may know more that you can add to this story.  So….away we go 🙂

Where is this car today?

In the early days of sports car racing on the West Coast, there was considerable rivalry in the under 1500cc class between Singers and MGs. While Singer had some advantages in power to weight ratios, MGs tended to figure more prominently due to better marketing and dealer support. Hence, MG Specials like Ken Miles’ MG R1 and R2 Flying Shingle usually stole the show.  Against these considerable odds, Kelly Buchanan and Bob Arnt, students at Southern California University, developed a Singer Special that had the potential to crucify the competition. 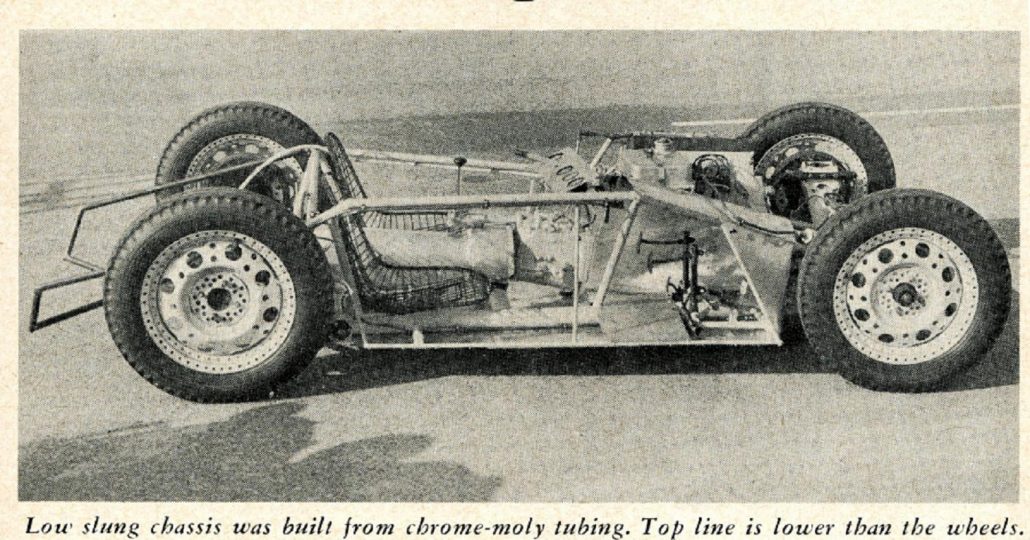 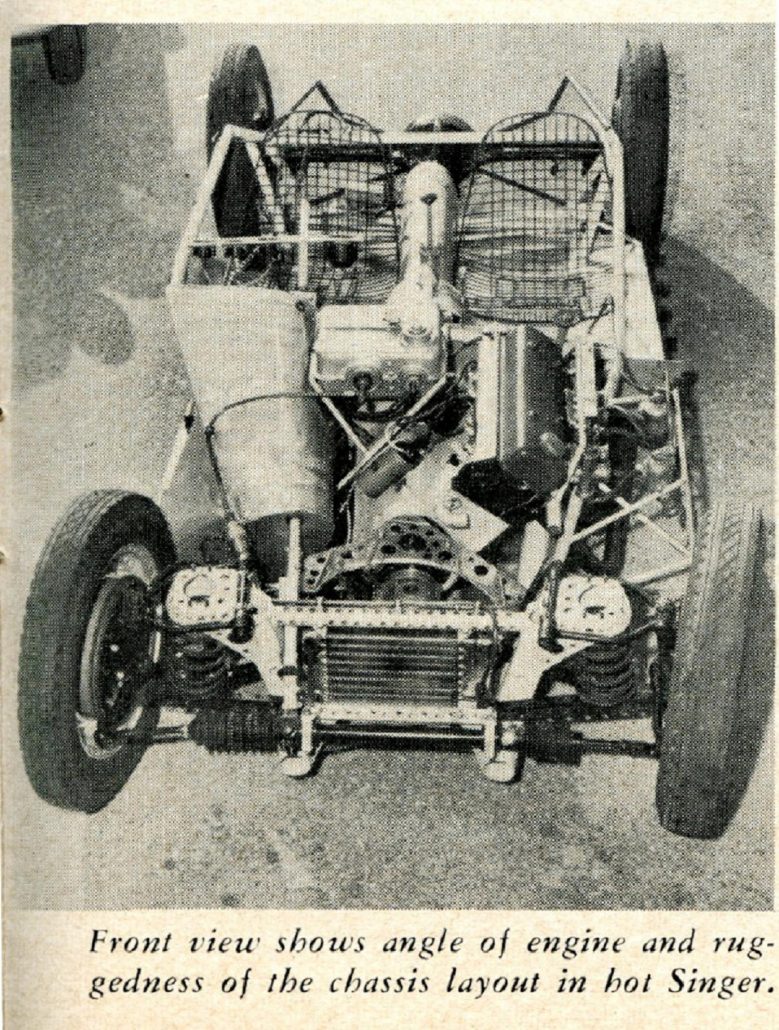 The chassis was a truss-type tubular frame formed of 2½ inch 4130 chome-moly. Major support tubes were 1 1/8” tube and minor trusses of ½ inch tube, all .063 wall thickness. Total wheelbase was shortened to 84 inches from the stock length of 91 inches. Adapted to the front end was the suspension from a wrecked ’52 Singer 1500 Roadster fitted with a Morris Minor rack-and-pinion steering coupled to a U-jointed ’40 Buick steering column.  Swanson-rebuilt 50-50 Gabriel shocks were also installed. 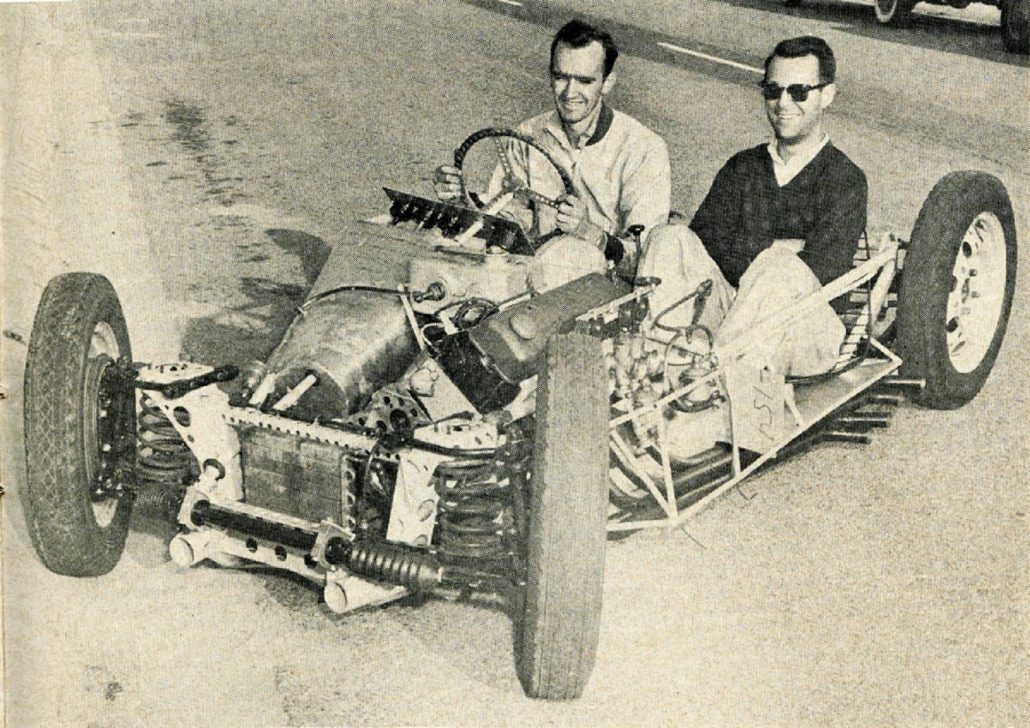 The rear end was equipped with Morris Minor torsion set laterally across the chassis, instead of longitudinally as in the Morris.  The rear axle, also from the wrecked Singer, was adapted to include a torque reactor, similar to that on the C-type Jaguar, to keep the right rear wheel on the ground.  For stability, a Panhard rod anti-sway bar, also from a Morris front end, was installed. 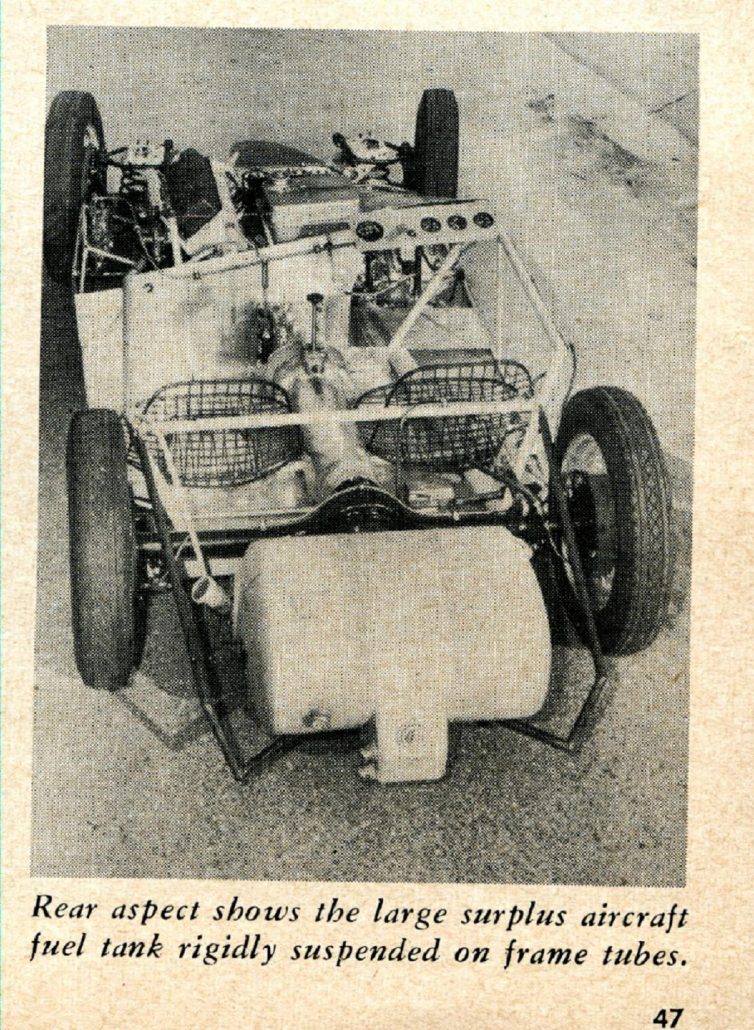 For brakes, the Singer units were used, but were modified to accept ’37 Dodge shoes and linings.  The backing plates were not merely drilled, but were cut away entirely for the utmost in brake ventilation.  Also used from the Singer were the disc wheels which were liberally ventilated by riddling them with holes. 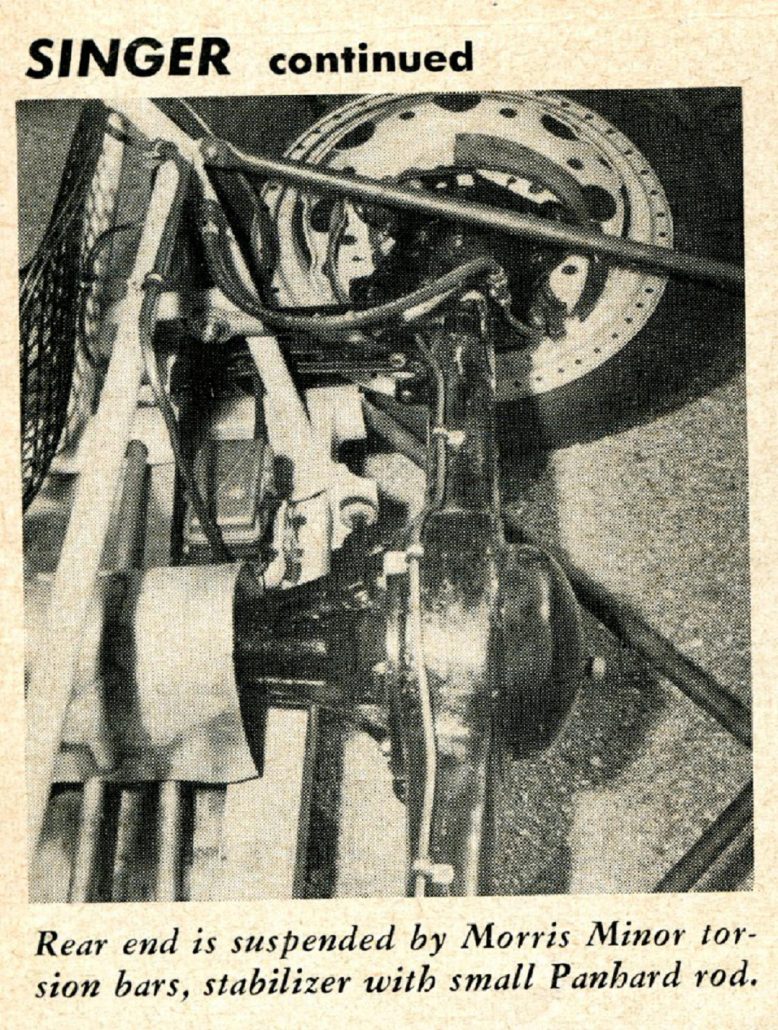 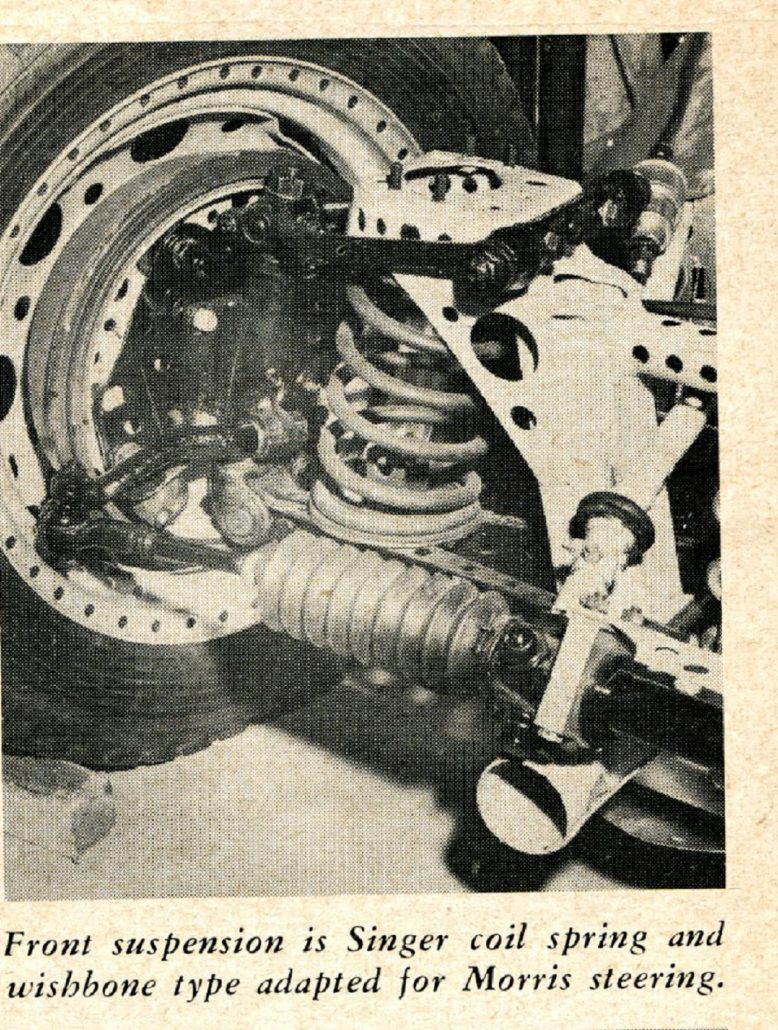 For the engine treatment, crank, rods, pistons and flywheel were taken to Vic Edelbrock and balanced both dynamically and statically.  The head was milled .050 of an inch and then given a full port treatment including 30 degree intake valves and 44 degree exhausts.

To accommodate four 1 and 3/32” Amal carburetors, Buchanan bored four 1 and ½ “ I.D. holes in the head adjacent to the intake ports and through the internal log manifold.  To these he fitted four flanged tubes to hold the Amals.  No balance tube was used. 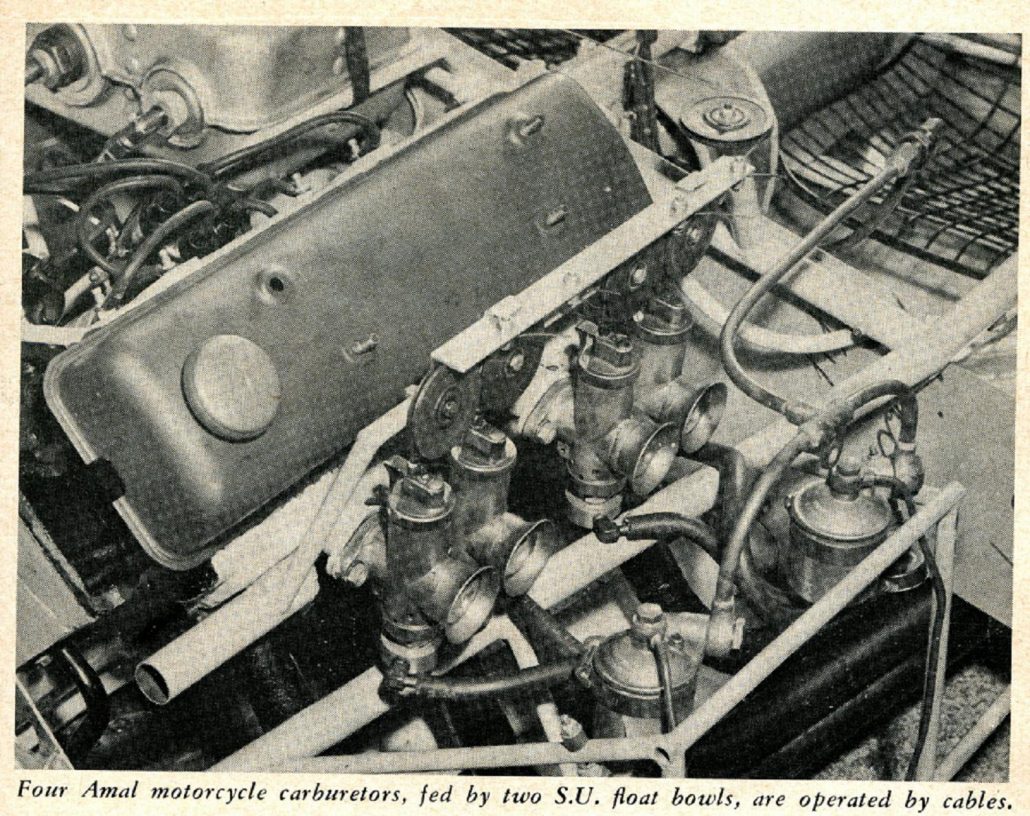 Triumph motorcycle springs were used in place of the stock Singer valve springs.  To finger the valves a Harman-Collins #6327 track grind cam was used.  This cam had a .335-inch lift with intake opening 19 degrees before top dead center and closing 63 degrees after bottom dead center.  The exhaust valves were just the opposite, opening at 63 degrees BBDC and closing 19 degrees ATDC.

Both cam lobes and rockers were hard faced.  For more compression than the head-milling allowed (.070 is maximum recommended for the Singer) Buchanan also milled the surface of the block .075 of an inch.  A standard Singer Lucas ignition with a heavy duty coil was used. 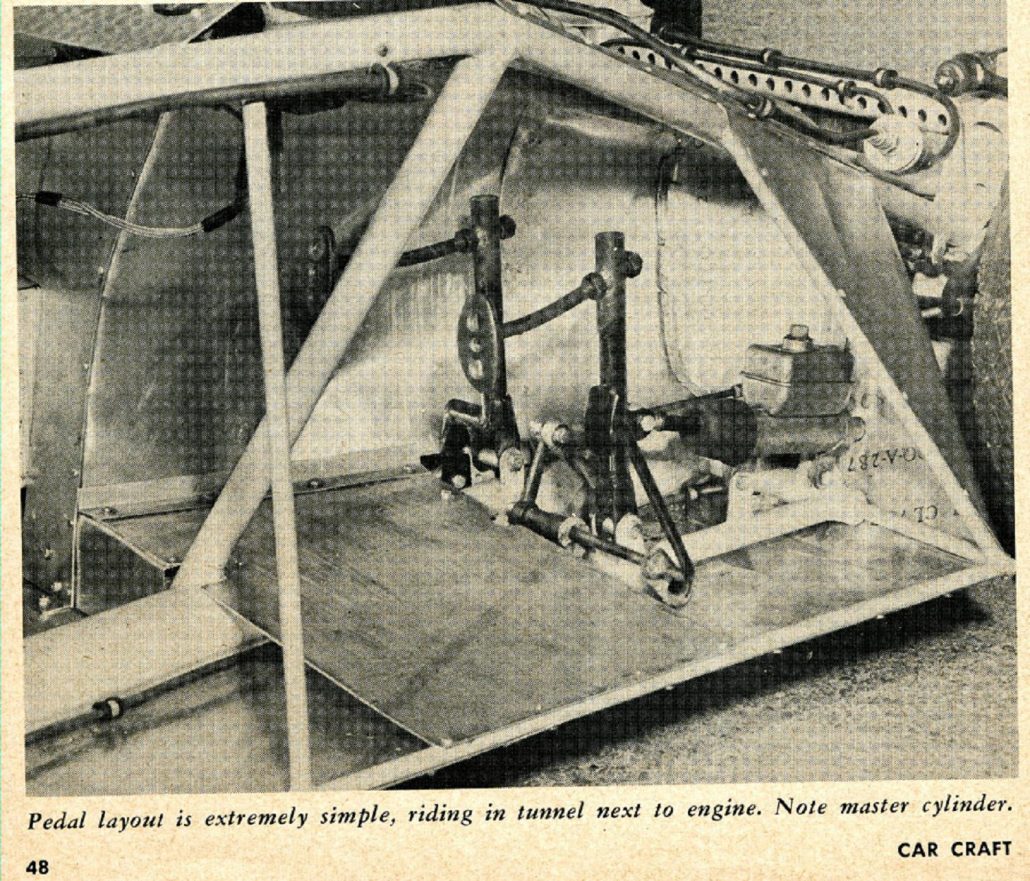 To achieve a low hood line, the engine was rotated approximately 45 degrees on the bell-housing.  This necessitated the use of a dry sump oil system.  For a scavenger pump to draw oil out of the slanted sump, a Chrysler pump was externally mounted.  This unit was designed to force the oil through a cooler made from a refrigerator coil and an aircraft filter to the main reservoir made out of a two-gallon de-icer tank. From there, the Singer pump pulled the oil to the engine.

North American Aviation wind tunnel modelers, Dick Snider and Dick Sigfried proportionately lofted a C-Type Jaguar body design to fit the 84” wheelbase and built a plaster mold. From this, they pulled an all epoxy body, with 3 layers of cloth and no matting, to form a very light weight shell. The cost to Arnt and Buchanan was $300. In all, 15 shells were created, with two being used on the Singer and one on a Jowett Jupiter Special raced by Ray Stevens at Torrey Pines in 1954. The whereabouts of the rest are unknown.

Bob Arnt drove at Palm Springs and spun out. Kelly Buchanan drove at Torrey Pines, but did not finish. Dick Van Laanen, who was a young sales man with Vaughan Singer Motors in Hollywood and notable Singer racer, was the principle driver. He raced the Special at Torrey Pines, Palm Springs and Santa Barbara, several times, finally crashing through some hay bales and flipping the car end over end. The broken Singer was put back in running order with a whole new chassis and body. 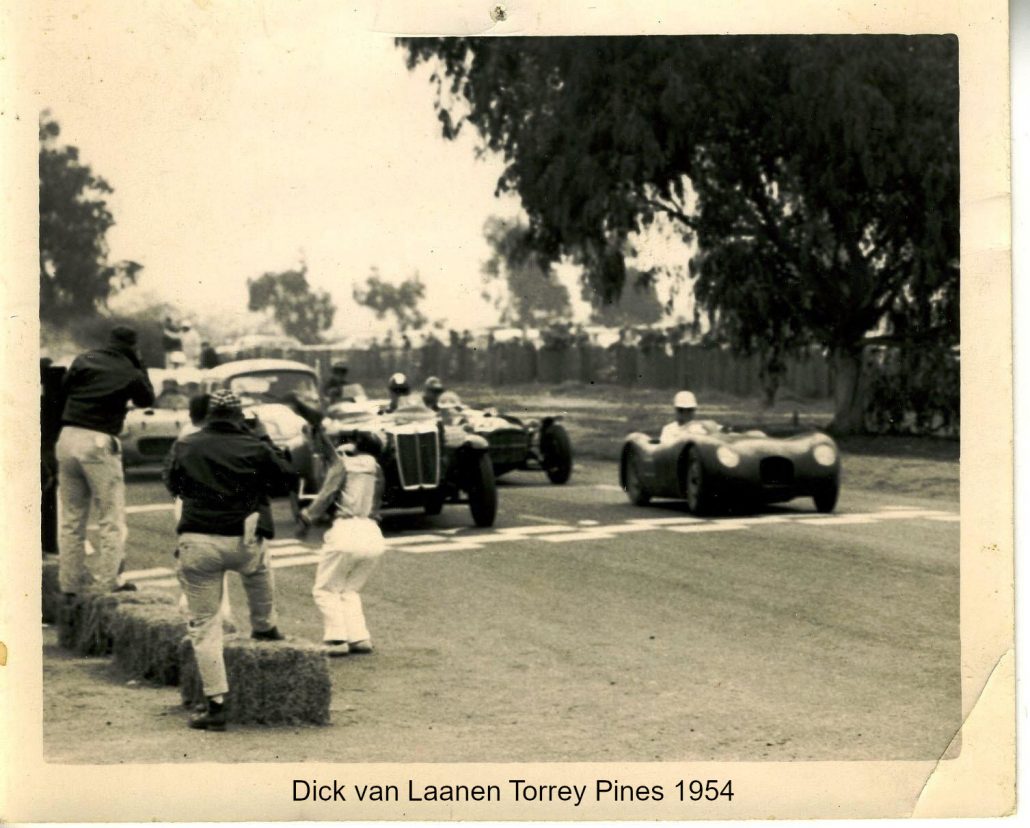 The car’s claim to fame was that it was on the pole five races in a row. It had stellar performance usually 5-6 car lengths ahead of the competition, and in the case of its Palm Springs appearance, laps ahead. Regrettably, the car was never properly sorted.  At Torrey Pines the car spun out on the 1stlap, then passed 15 cars in 2 laps.  It was running about 6th when the gear box packed up.  At Palm Springs, with Van Laanen driving, it was two laps ahead of the nearest competition when ignition problems developed from an overheated coil that was bolted to the block.

The car was sold around 1960 in Orange County and has not been seen since. 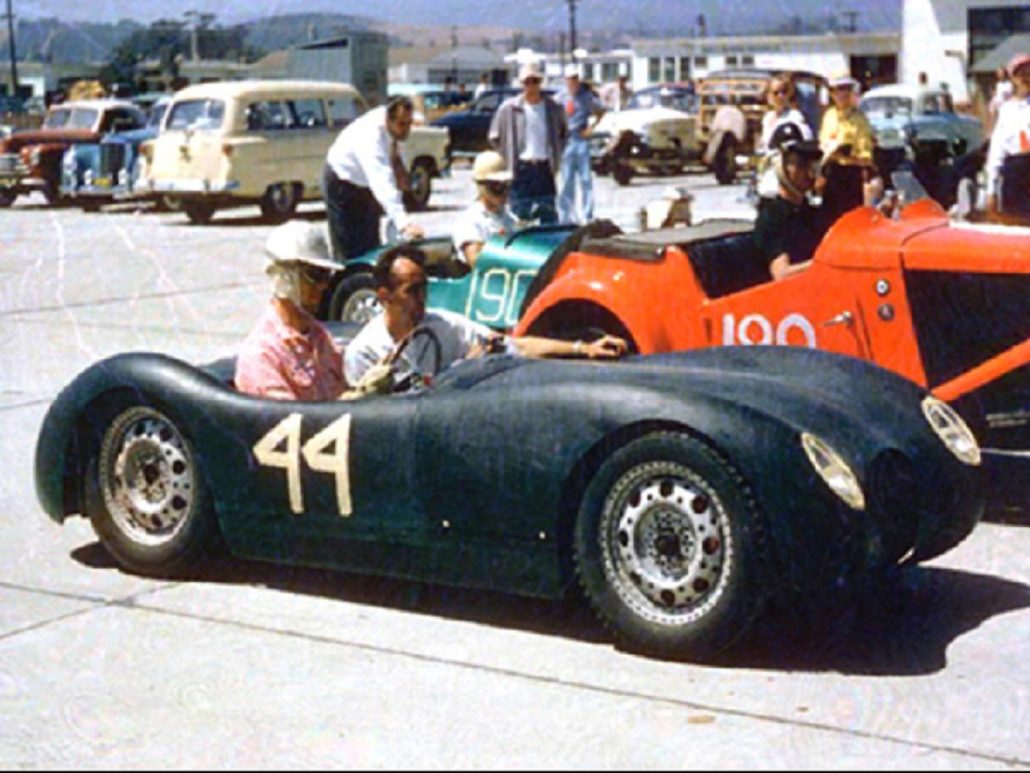 This is such a beautiful sports car that I hope its been tucked away for decades for others to find it and bring it back to be seen.  Perhaps one of you on the west coast may know more of the history and what became of the car?  As always, time will tell.

Thanks very much to Peter McKercher for sharing today’s story.  Those of you wanting to read other articles penned and shared by Peter for Undiscovered Classics can click on the link below: