The story of DM Nacional is one of the early postwar custom and coachbuilt cars in America – actually North America.

Custom sports cars, custom cars and sport customs were being built across America.  An entrepreneur and business owner, Ruiz Galindo, and his company, DM Nacional of Mexico City, Mexico, noticed.  In the early postwar years, the story of DM Nacional and their custom cars was carried by nearly all automotive magazines and trade journals such as Motor Trend, Ford Times, Auto Sport Review, Auto Sportsman, Speed Age, Trend Books, Science and Mechanics and more.

From the late 1940s thru the early 1950s five cars were built by DM Nacional.  Each one coachbuilt and tailored to their customer’s desire.  Over a series of stories here at Undiscovered Classics, we’ll discuss each one of these coachbuilt cars as well as additional supporting detail.  In today’s story, we’ll begin to explore the history of one of these cars – the 1950 Chrysler “Sedanca deVille”.

Down The Rabbit Hole

Learning more about this company would prove a 10+ year challenge, but one of the first out of the gate to assist was good friend, automobile historian and literature collector Alden Jewell.  Alden was born in 1937 and started collecting automobile literature before he turned ten years old.  By the early 1950s Alden was writing to companies and requesting literature and information – much of which he still has today.  I called Alden and asked if he had any information on DM Nacional, and a day or two later I heard back.

Alden had written DM Nacional requesting information on October 7, 1951 and he heard back from them on October 20, 1951.  What good memory you might be thinking – and you would be right.  But he also had a log book of all communications that he started in late 1951 of his writing to companies and when he received information back.  Part of that log book is shown below concerning DM Nacional

The letter Alden received from DM Nacional was courteous and detailed.  They acknowledged that Alden was collecting literature and they provided information to help.  The letter dated October 17, 1951 was from the DM Nacional General Manager Armando Ruiz Galindo, and in it he discussed three cars they were finishing.  The letter is shown below. 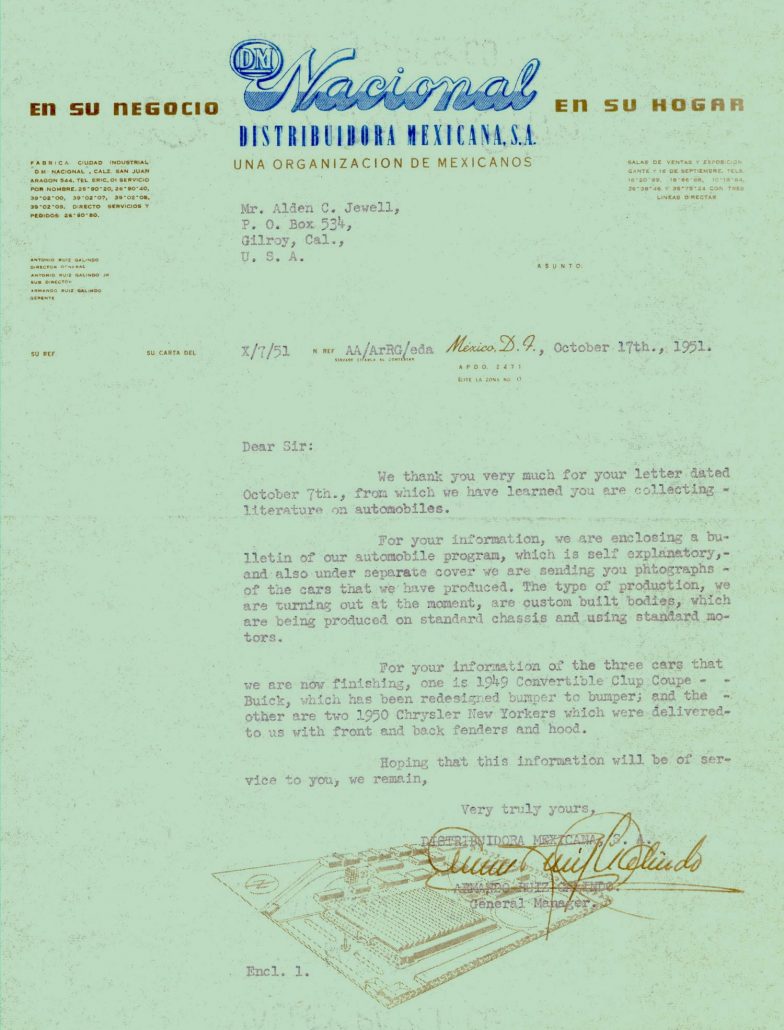 Another piece of information shared by DM Nacional with Alden was a description of the background of their company and what their focus was on for building coachbuilt automobiles.  I’ve re-typed this information below and it is followed by a scan of the same letter.

“After studying existing facilities and the skill of the Mexican workers for the manufacture of automobiles, DM Nacional has begun the following program.

A division has been set up within the Industrial City DM Nacional that will be dedicated to the construction of automobiles.  This division is now equipped for the manufacture of custom built bodies and has been set up on the same basis that custom built bodies manufacturers in Europe are, like “Pinin Farina, Touring, Figgoni & Fallachi, Sautchik, etc.”

It is equipped with modern machinery plus the natural skill of our workers, the manufacture of special DM Nacional cars has been definitely started and they can be compared, without any reservations, with the production of the best European automobile body builders of this type.

It has been studied and designs and tests have already been made for the construction of an economical car body, and in combination with foreign manufacturers of motors and chassies, by the middle of next year production of an economical Mexican automobile will begin, continuing in the meanwhile, with the construction of custom built bodies of which several have been produced with great success, not only in our country, but abroad.” 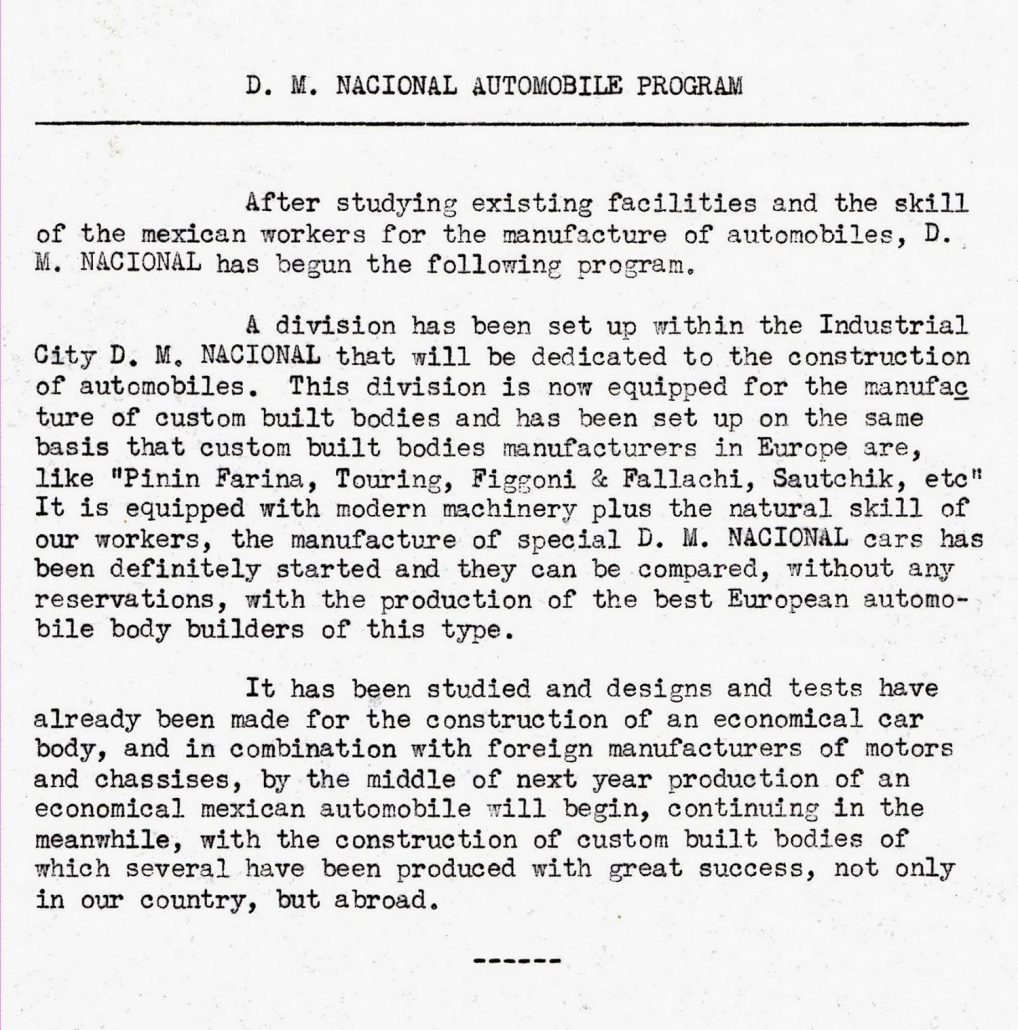 Those of you who read the letter to Alden above, will remember that Armando discussed the delivery of two new Chrysler New Yorker chassis delivered with front and back fenders and hood. One of these ultimately became the “Sedanca deVille” which is the focus of our story today.  Why not call it a limousine you might ask?  That would be a good question so let’s explore.

Typically limousines are on stretched wheelbase cars.  This car built by DM Nacional was on a standard Chrysler New Yorker chassis and while “big” it was not stretched.  Within the industry, these cars which you and I would call “smaller limousines” are often referred to as a Sedanca de Ville.  Wikipedia defines this type of car as the following:

“The Sedanca de Ville, or Sedanca deVille, is a body style with a closed rear passenger compartment and an open front section for the chauffeur. It is also known as a town car or coupé chauffeur or coupé maître.”

I first saw a photo of the Sedanca deVille in a clipping from the trade journal “News of the Automotive Industry” dated May 15, 1951.  This gives us a good “finish date” for the car, and the caption read:

“Texas Bound: Built by the Mexican National Distributor company on a 1950 Chrysler chassis, this custom-built automobile was exported from Mexico to San Antonio, Texas.  It is to be displayed in several US cities.” 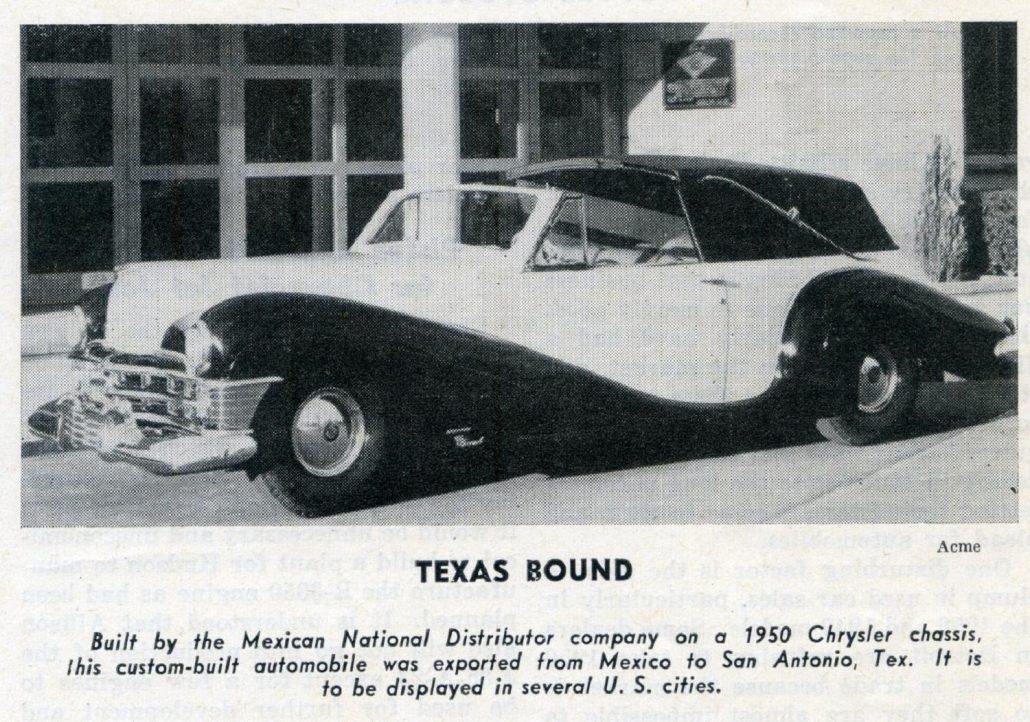 Years later I would learn that this was the only car that DM Nacional exported out of Mexico and it went to San Antonio, Texas.  In October, 1952 Speed Age Magazine in an article about DM Nacional coachbuilt cars added a bit more detail about this car as follows:

“A lady ordered a limousine with a special shopping compartment so that her daily purchases of clothing would not get wrinkled on the way home.”

Only two photos of the Sedanca deVille have been found over the years, and both are shown below.   In one of the photos the top has been removed from the driver’s compartment. 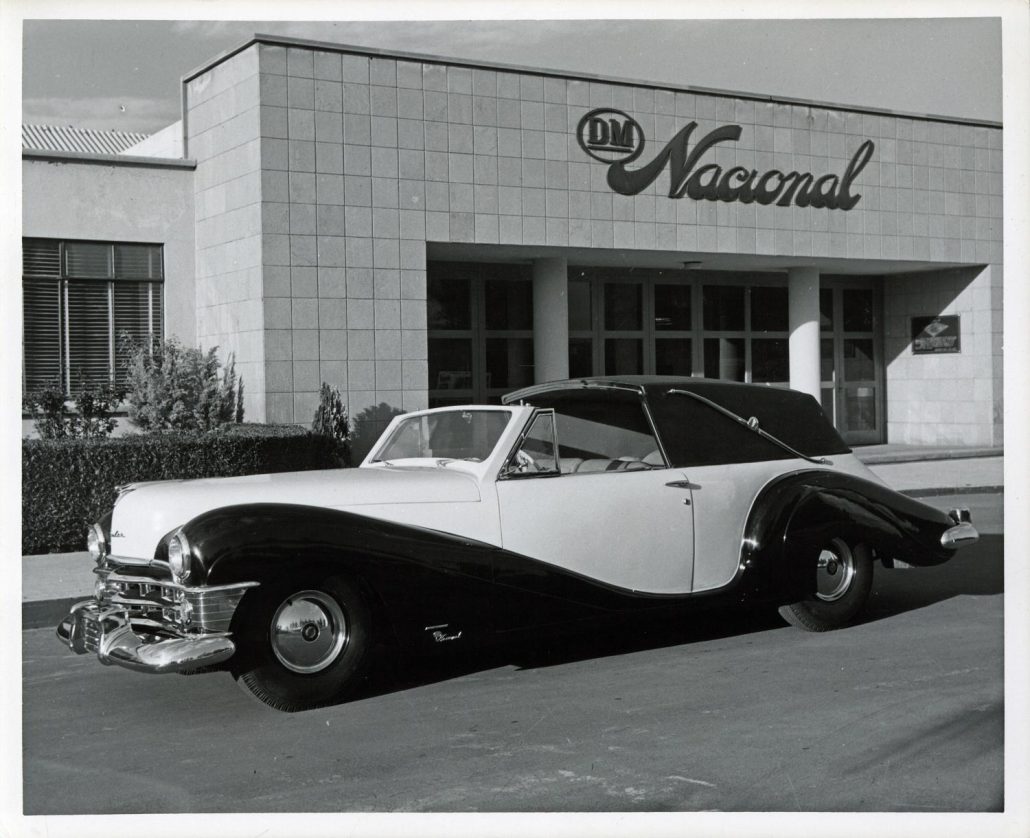 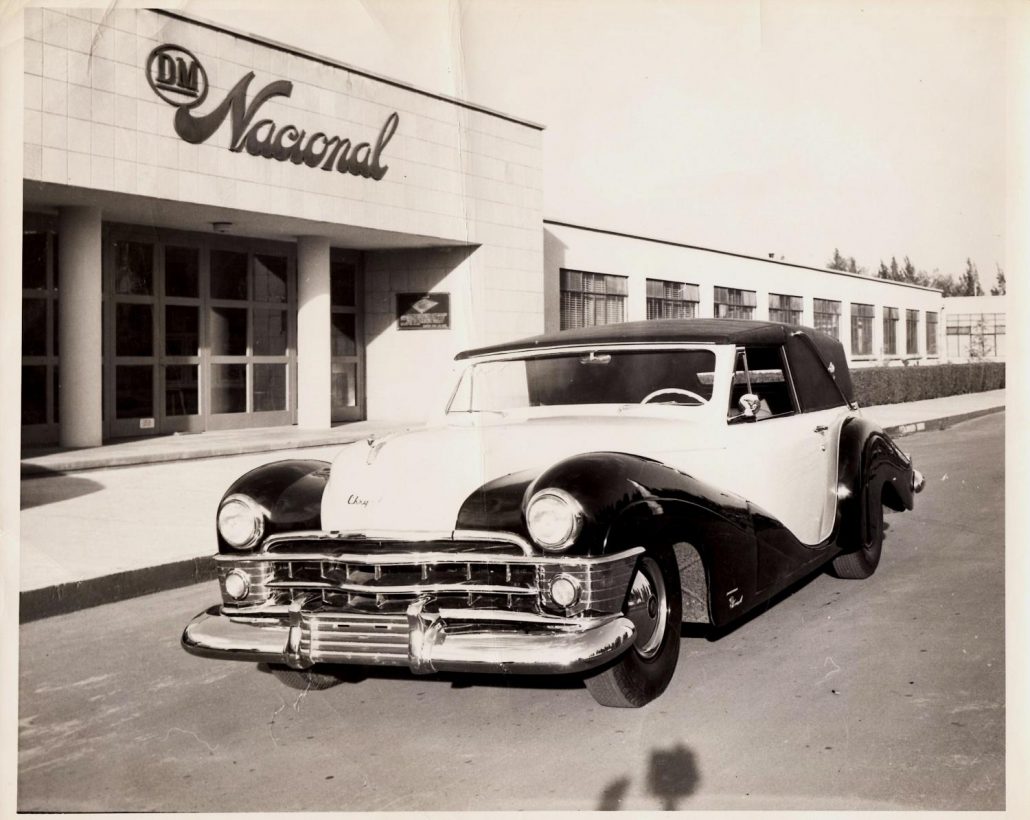 Over the years, additional information surfaced on all five of the DM Nacional coachbuilt cars.  People and sources which have helped include the following sources: 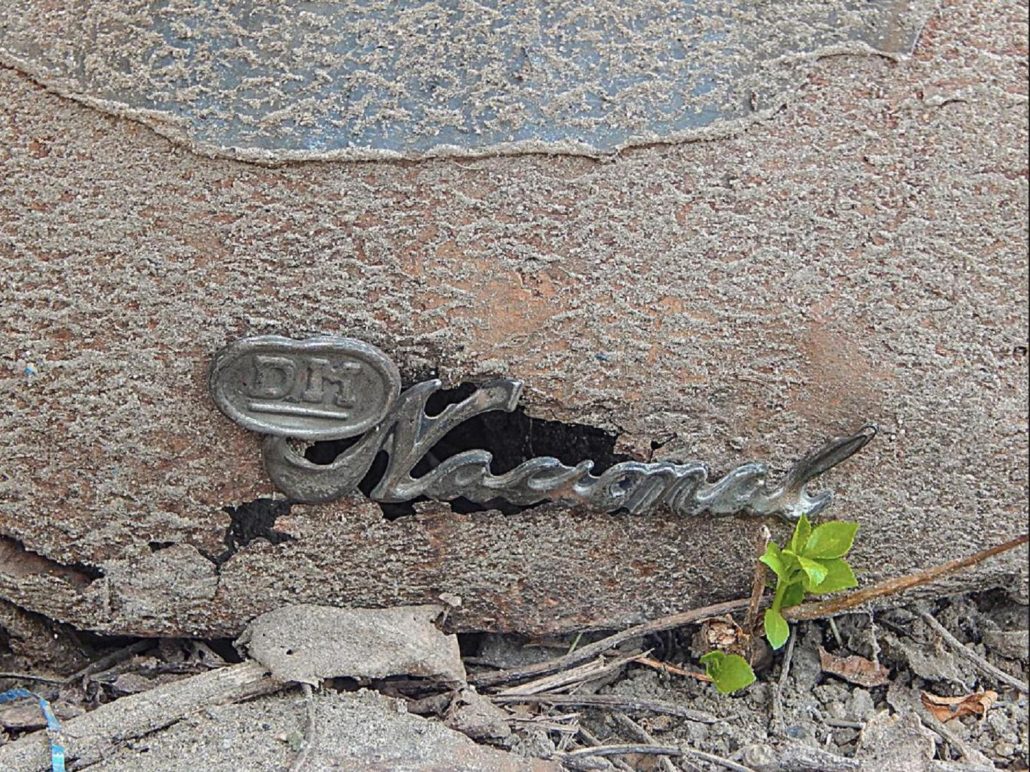 Do you want to guess what the photo above means?  Stay tuned to find out gang 🙂