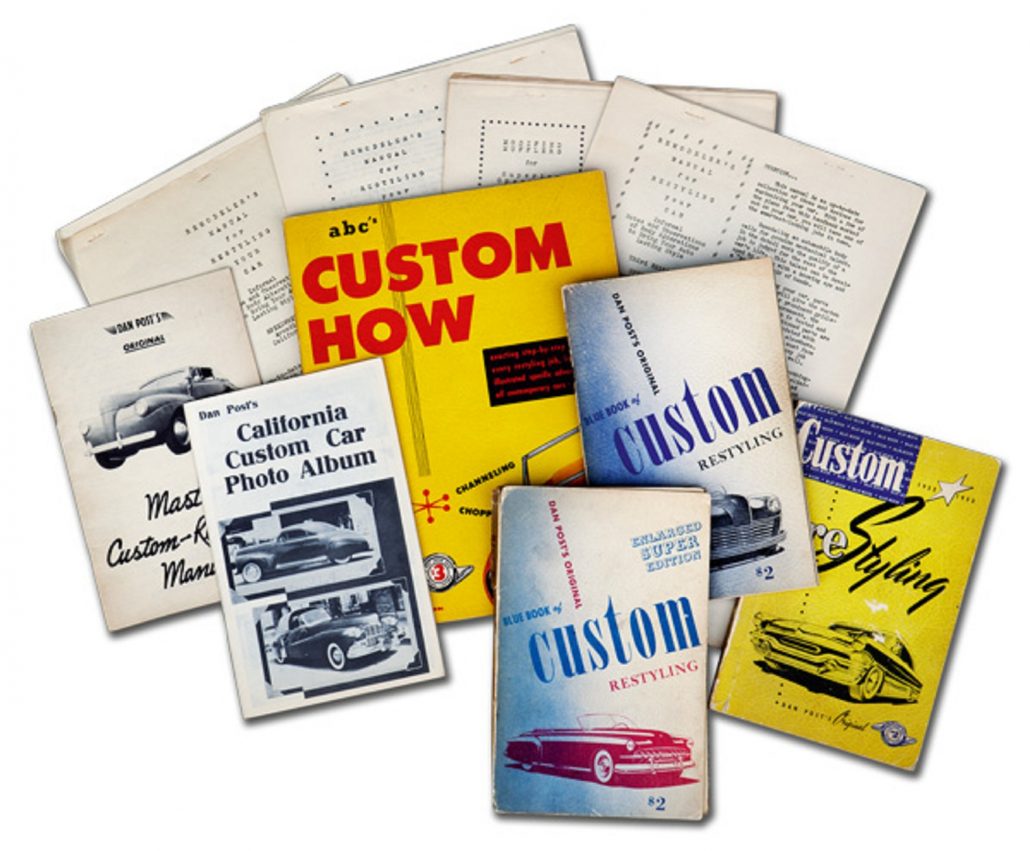 When Did It Start, What Did They Publish, and Why It Was Researched

Dan Post was the first to document in great detail how to build a custom car in postwar America.  Being “first” is an impressive thing to say – especially when the field of customizing a car was a fledgling enterprise in the mid 1940s and cars to customize were few and far in between.  Remember…during the wartime years new cars weren’t produced and those that were new before the war were treasured commodities.

Cars in the prewar era were mostly designed with open fenders.  Only in the early 1940s and then in the postwar years were the designs “modern” enough to consider customizing cars in many of the ways we think of today.  And it was during this time when Dan Post was there to capture, document and share what he was seeing with America at large.  Dan Post was there at the beginning – writing and learning about what he saw – and sharing it across the country.

He started in 1944 – that was the first year he started writing and sharing what he learned about customizing cars – and this was about a year before World War II ended.  Dan Post witnessed the best of what was happening at the time, and the genesis of this movement was in California where he lived.  Dan Post was friends with the Barris brothers and other who were soon to be legendary customizers in Los Angeles, California.  These individuals were learning their craft and shaping what would become a national passion in the years to come.

His first ads appeared in July, 1944 in both Popular Science and Popular Mechanics – almost a full year before World War II ended.  Initially in 1944 his company was called “Speedwheel”, but the name changed based on the type of document he was writing.  The company name was “Mellowtone” when writing a piece about mufflers and when writing a booklet on how to buy a used car, he used the company name of “Truvalu.”  By 1947, for Post’s Custom Car literature, he would begin using the company name “Post Publications.”

Above: One of the First Ads For Dan Post Custom Car Literature – Popular Mechanics: July, 1944 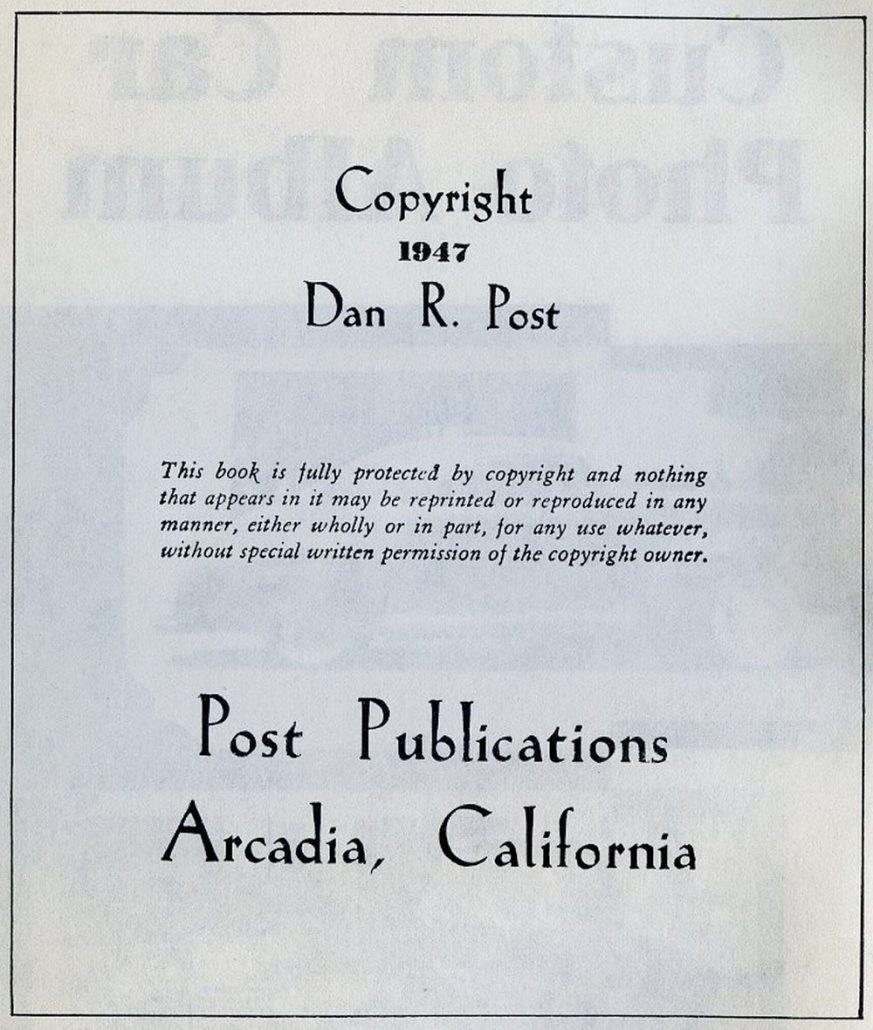 From 1944 thru 1946, Post advertised in Popular Science, Popular Mechanics and other booklet sized magazines. Why not car magazines?  Good question.  They didn’t start until Speed Age magazine came out as a monthly edition in May, 1947. In June, 1947 Road & Track started but printed only 5 issues between its start and December, 1949.

Remember….coming out of World War II the country was beginning anew.  Money and resources were moving from wartime industries to the home economy and this took years – not weeks – to take effect.  There was not a lot of money or resources to create a new company, and Post was challenged by this as anyone would be at that time.

From 1944 thru 1946, Dan Post sold 4 different items in mimeograph form – we would call them photo or xerox copies.  He published the “Dan Post Remodeler’s Manual in 1944, 1945 and 1946 and a “Modified Mufflers for Superior Operation and Mellow Tone” in 1946.  These were the only mimeograph sheets (stapled) he would produce and all were on legal size paper – 11×17.  In 1947 he would begin printing booklets.

These early documents capture word choice that are unfamiliar to us today in customizing a car.  Discussions on “plaining a hood” refer to what we now call dechroming and other terms.  “Turtle-Back Doors” is another term rarely heard today which had to do with welding in the trunk lid to make the rear car shape look more like a “turtle back.” 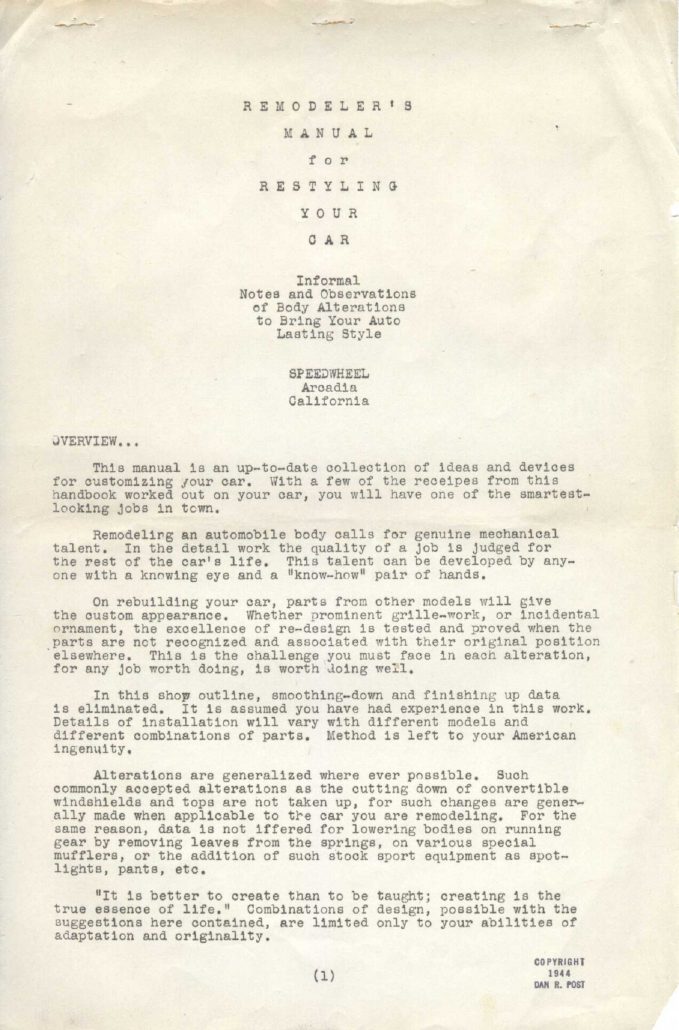 Here’s the first page of the first book published on customizing cars in America. It was published in 1944 and the booklet was 16 pages long – legal size and stapled. 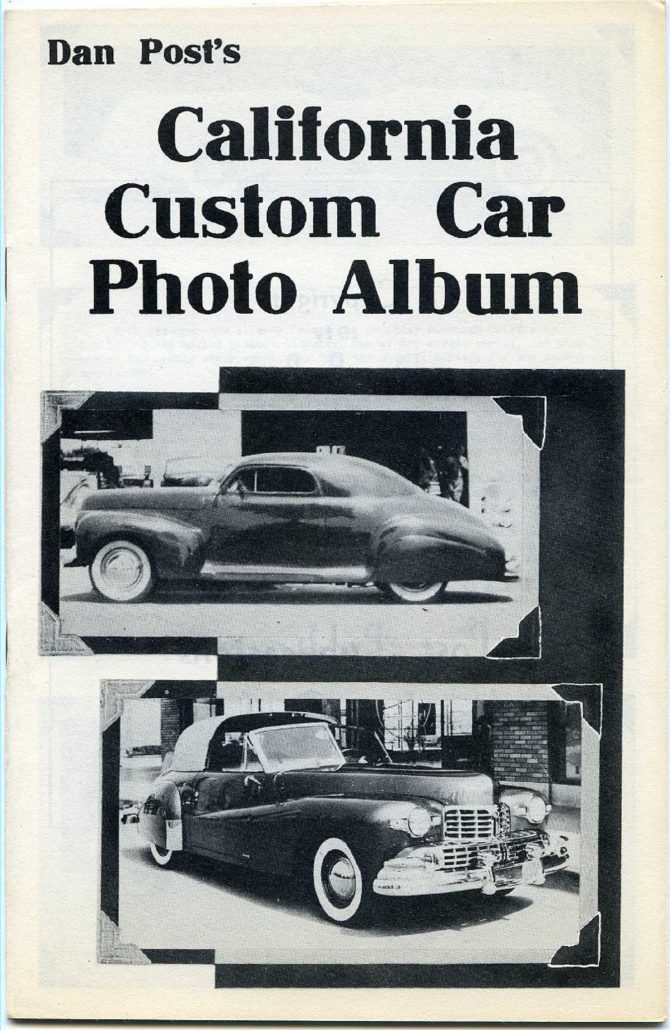 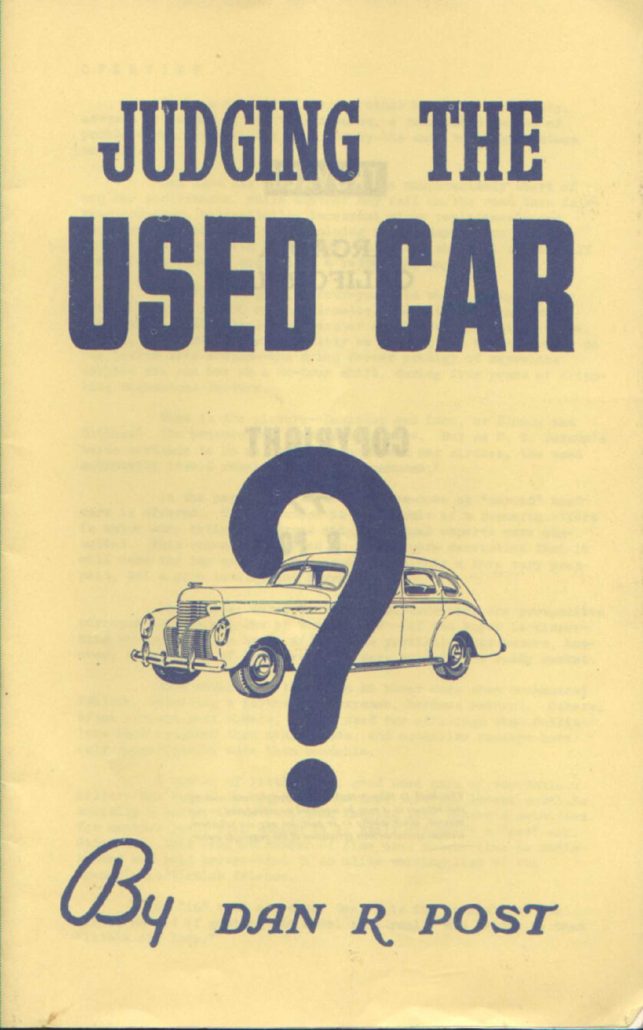 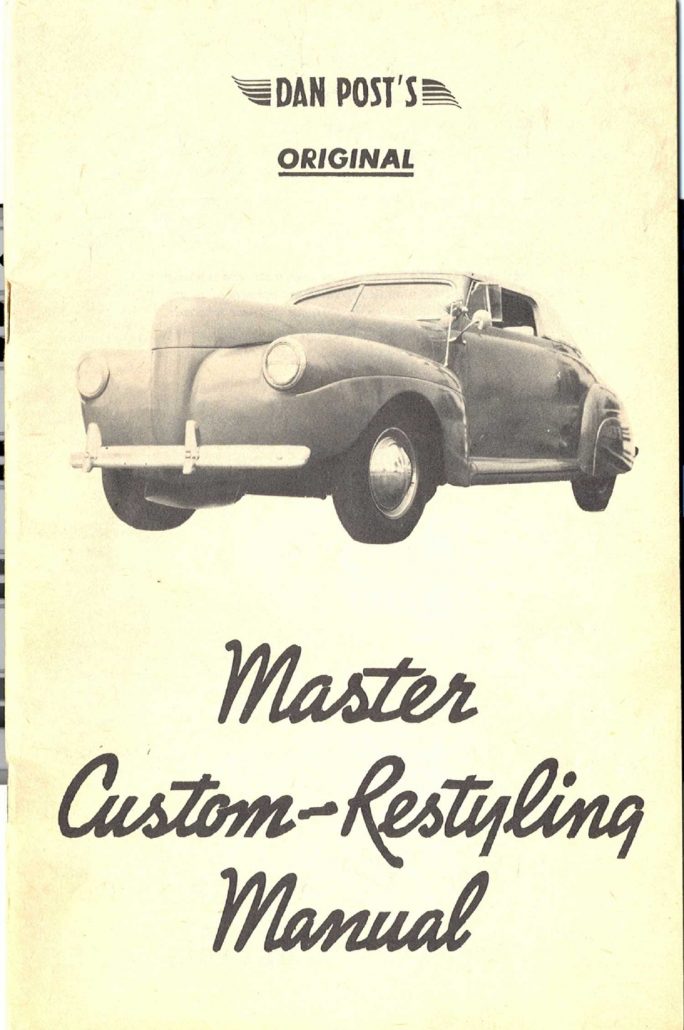 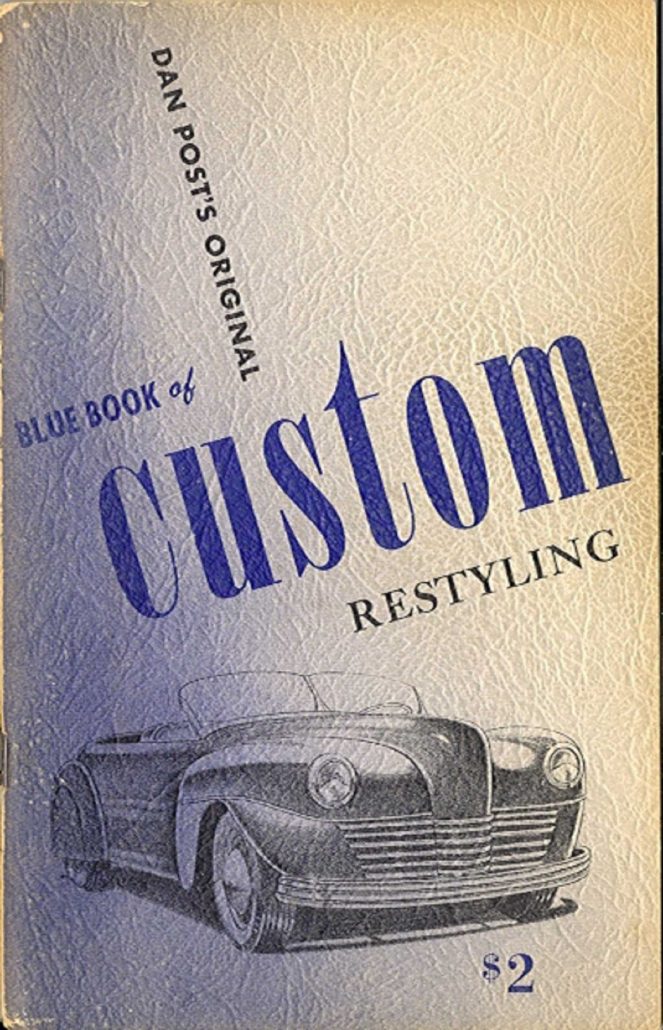 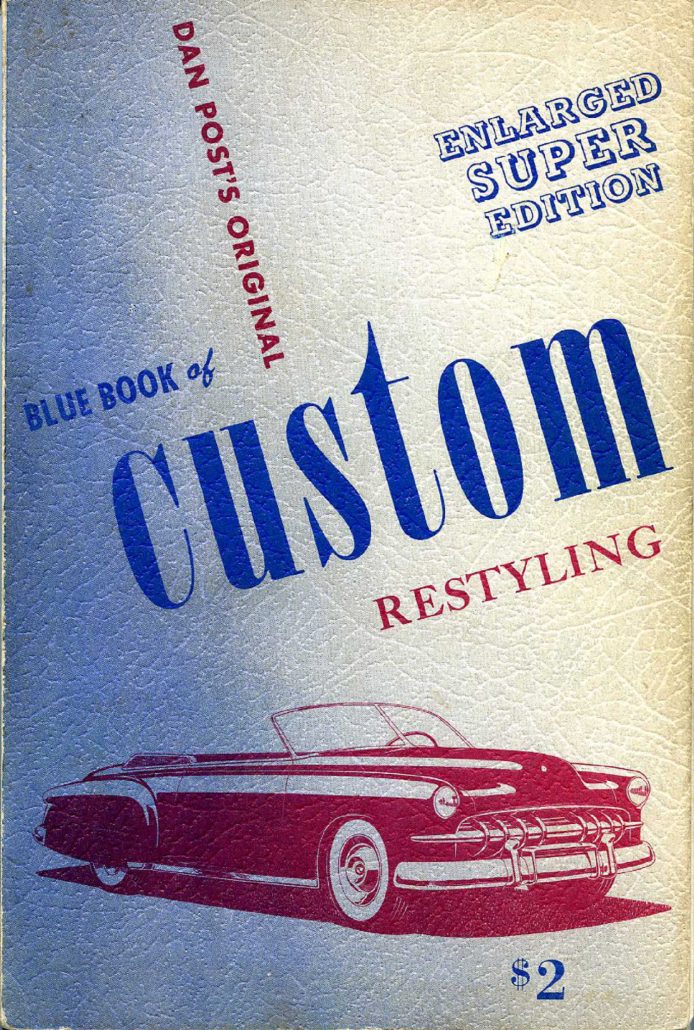 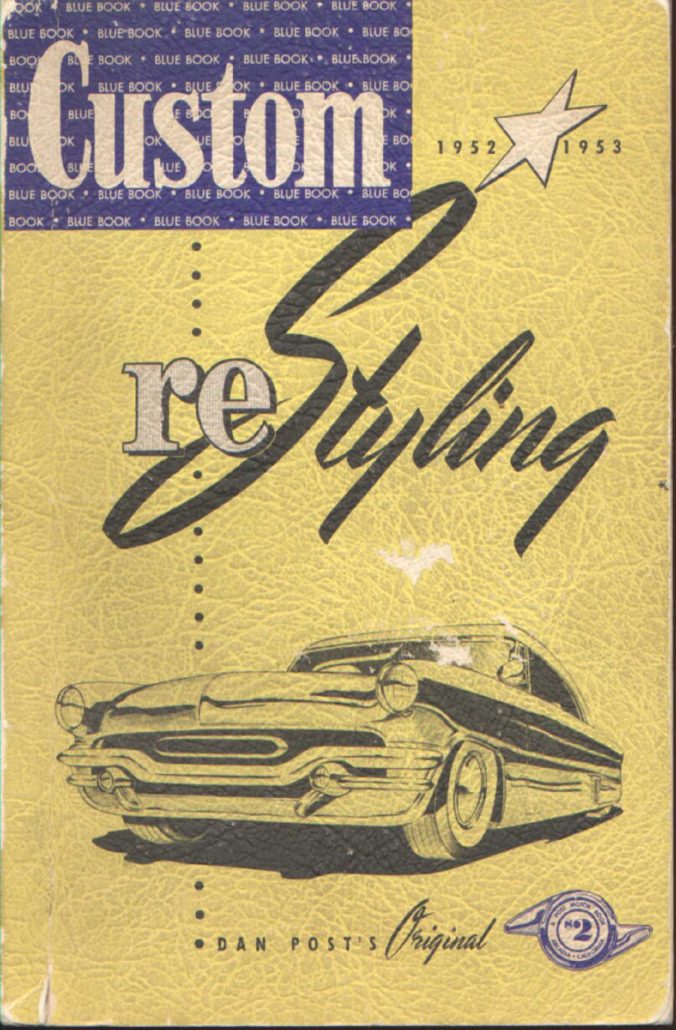 Dan Post’s final published book on customizing cars – his piece de resistance – appeared in 1954 and was written by Bob Gurr.  It was a “how to” guide and showed how the best customizers did their work.  If you want to build a custom car today using “old-school” methods, this is the book to use. 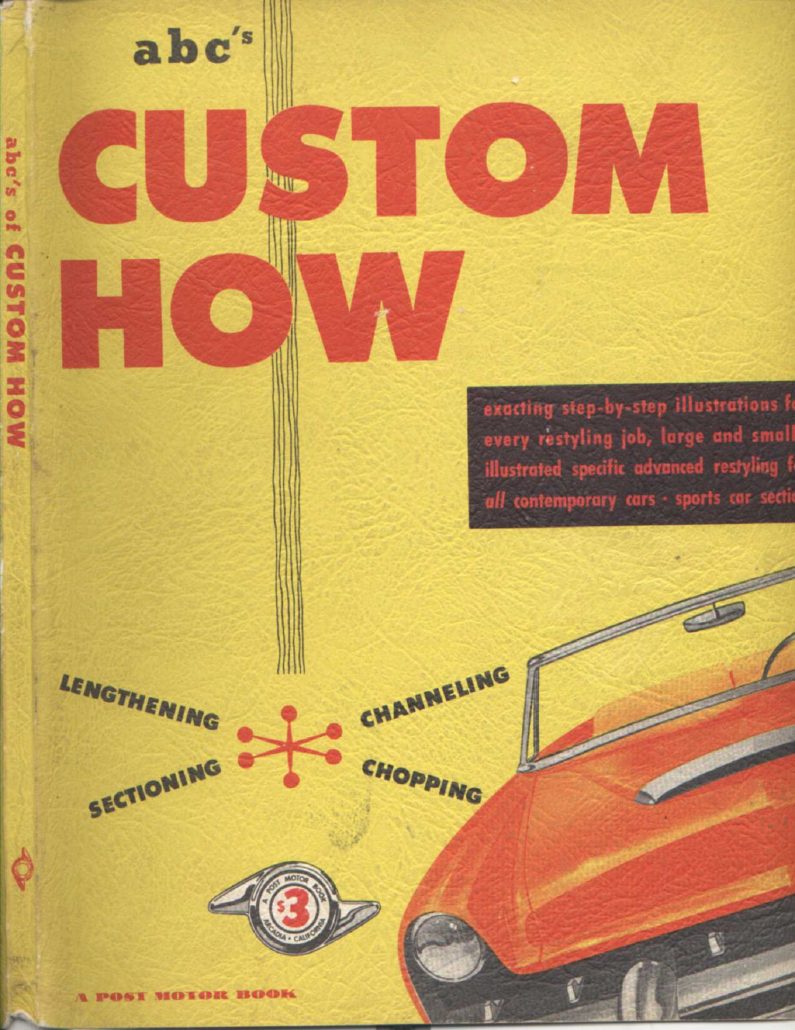 The Dan Post Custom Car Publications captures the birth of customizing a car in early postwar America.  There were other publishing companies that produced a limited number of documents such as Almquist and Clymers, but Dan Post was first, he produced the largest number of documents from 1944 thru 1954 and was involved and showed some of the best work done by Sam/George Barris, Jimmy Summers, Coachcraft, Gil Ayalo, Valley Customs, Jerry Huth, Frank Kurtis and others.

Post was in a league by himself and his body of work represents the birth of customizing cars in America.  Young men bought his publications and used them along with magazine articles to further their interest and skills in customizing.  We owe a debt of gratitude for such perseverance in capturing this genre of cars and techniques used to build them in real-time and sharing them with the America public at large. 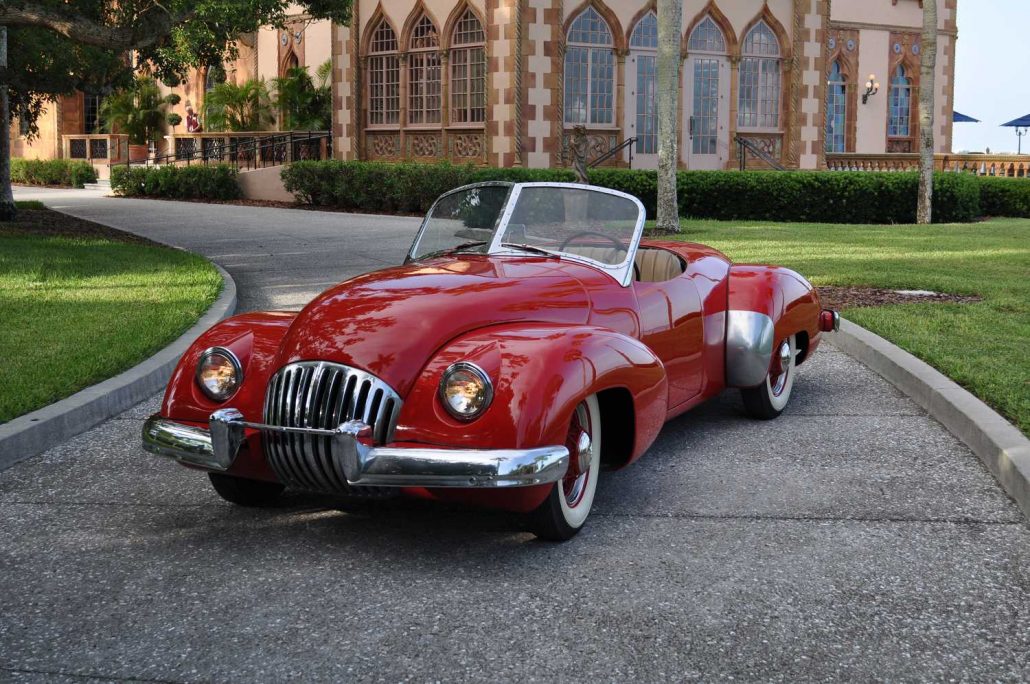 In 2007 I acquired the 1947 Kurtis-Omohundro Comet.  In subsequent research we learned that it was one of the first coachbuilt sports cars in America and was designed and built before the first magazine was printed in the postwar years.  Very little was known about this car at the time we acquired it, and that’s when we started researching the early postwar history of custom cars in America.  But we did find a page showing three photos of our car in the 1947 Dan Post California Custom Car Photo Album shown below.  That piqued our interest. 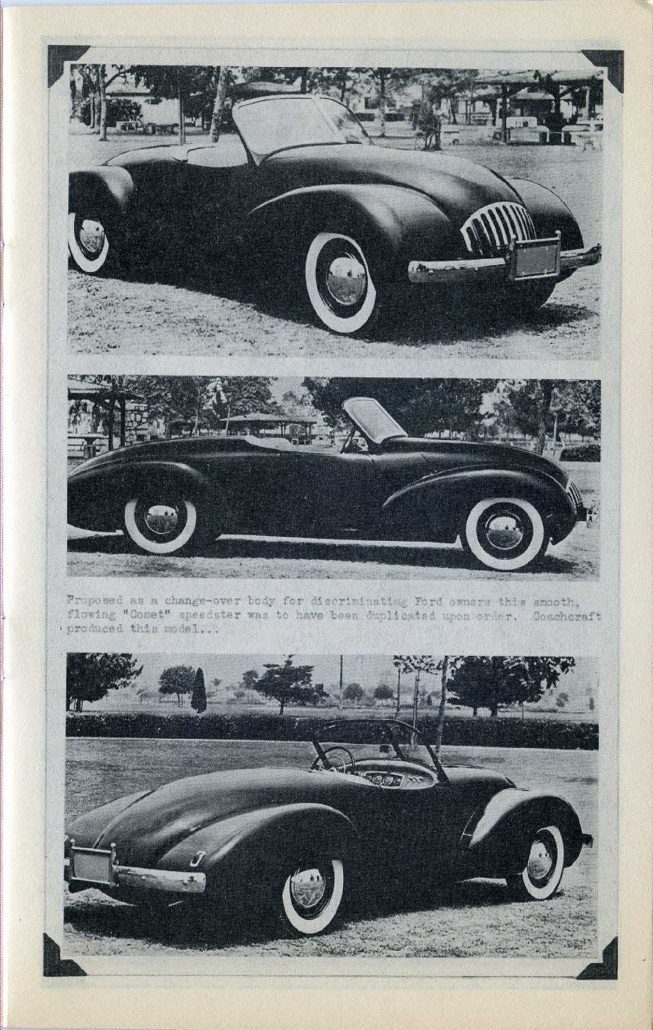 As I was interviewing people, I was given the article “Taildraggers On the Lawn at Pebble Beach” written by Ken Gross.  This article referenced Dan Post materials and over the course of the next 3 years, our research intensified.  We contacted and became friends with the Post family, the Almquist family, the Kurtis and Omohundro families and a number of other families and more.  We wanted to learn more about the history of customizing cars in America in the late 1940s – a topic little to no information was about in detail.  Up to this point, customizing cars was detailed in the 50s but not the 40s.  What happened in the 1940s which was essentially the birth of customizing a car in America?

By 2009 our research into Dan Post materials was complete and we worked with Rodder’s Journal to share this history with the custom car community.  You can read this article by clicking on the link below:

At the time of the publication of the article in the magazine above, we were taking our freshly built 1946 Bill Burke Belly Tank Tribute Streamliner to Bonneville for a photo shoot with Peter Vincent for The Rodder’s Journal.  Driving a bit further west after the shoot brought us to the Rodder’s Journal headquarters in the San Francisco, California area were we took the photo of Geoff Miles of The Rodder’s Journal below and gifted the full Dan Post Archives to them.

We had hopes that they would make this important archive of custom car literature available to others who were interested in learning the detailed history.  And we were right – more on that later. 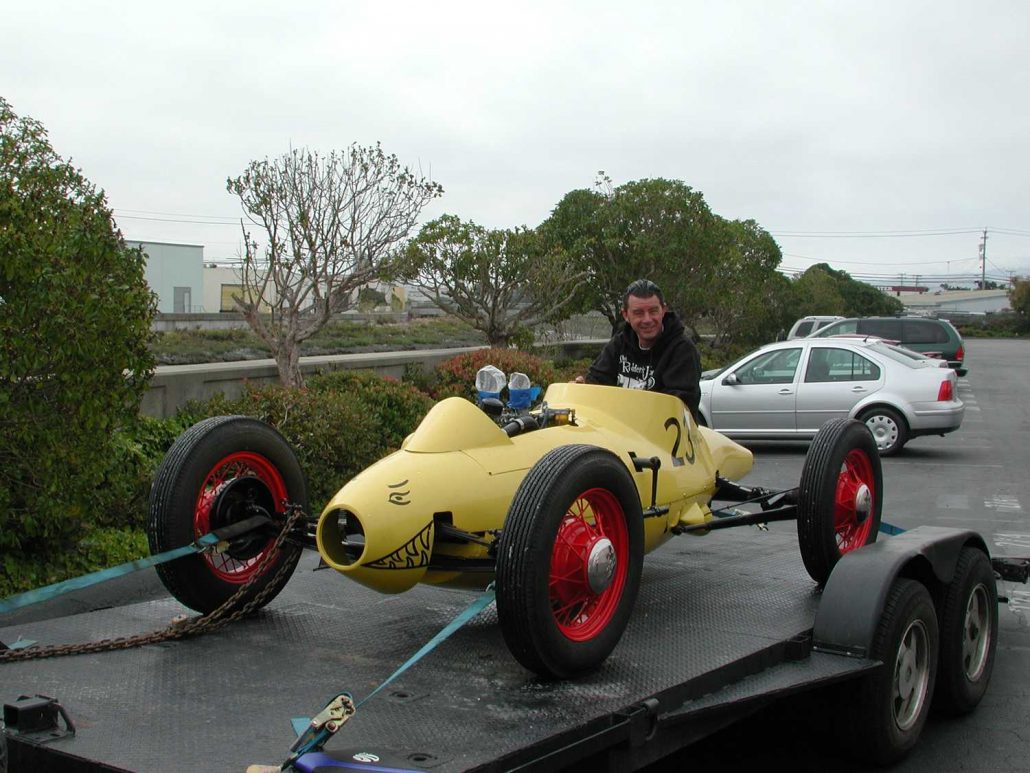 Geoff Miles of The Rodder’s Journal takes the reins of the Bill Burke belly tank which would appear within a year in their magazine as a feature article.

After leaving TRJ Headquarters, we were fortunate that Dan Post’s son lived close by, and we stopped to see him.  We were able to gift a full box of the magazines featuring his father’s work in The Rodder’s Journal as shown below in the photo.  Thanks for sharing your families history Dan. 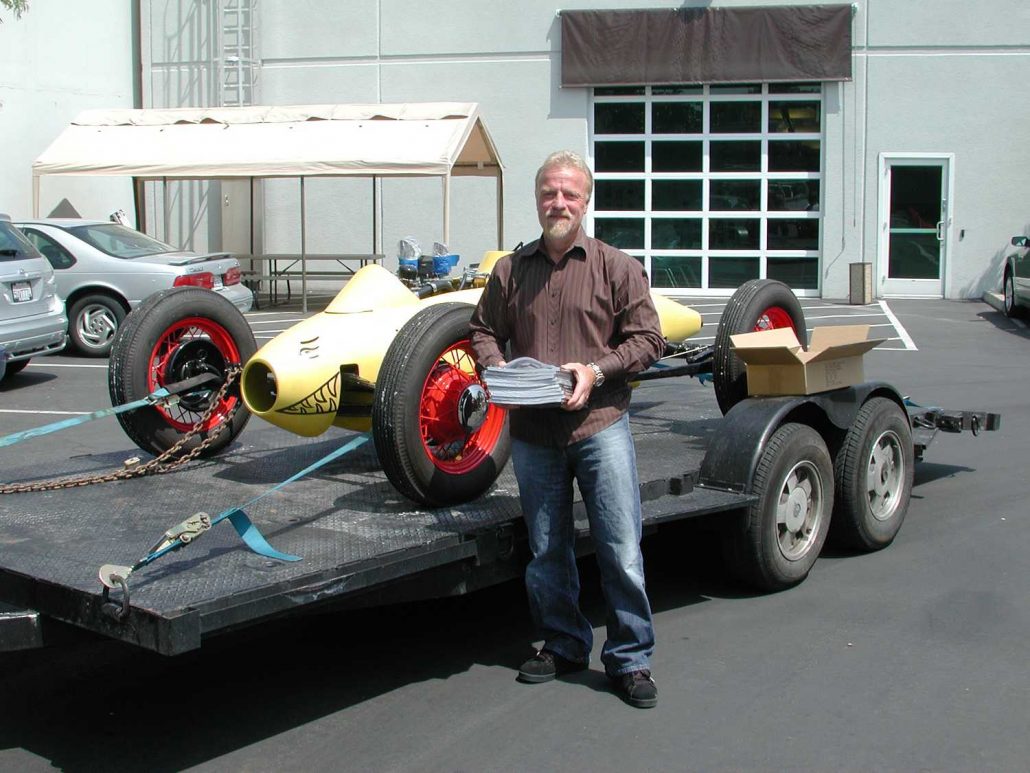 In 2013 our wish came true and The Rodder’s Journal released a box set of Dan Post’s Custom Car materials from 1944 to 1954 to an enthusiastic audience.  They were kind enough to recognize our efforts and you can click here to see their comments concerning our role in making this happen.  You can read more about the re-issuing of these materials via the link below:

It took some time and lots of coffee (and maybe loud music playing in the background) but the full breadth of Dan Post’s custom car literature is now online at Undiscovered Classics.  And more.  Many of the pieces, stories and photos we acquired from Dan Post’s son, Jim Sitz, Marcia Campbell, Bob Gurr and more are included in this archive and you can access and read about them in detail.

Our goal in posting the Dan Post’s full custom car library is to ensure that the work he did documenting the birth of the era for customizing your car can be shared with all to enjoy.  Dan Post custom car materials are hard to come by – even after the box set was released in 2013.  By sharing all online we hope that others can read through these materials and seek out printed copies if so desired.  We are still working on listing other books that Dan Post published, but our plans at this time are only to provide access to the early custom car materials Post published.

But I bet finding those printed materials will be a lot easier knowing the history and detail of what was printed and when, where and why.  And I hope that those of you who go down this path have fun reading the custom car materials – as I did – and watched history unfold before my eyes.