The first Jabro….so much different than the later Jabro sports cars that James P. Broadwell was best known for.  But it all started in 1952 with a sport custom also called the “Jabro.”  The wheelbase of this car is 106″ so it’s a bit bigger than many of our favorite handbuilt sports cars (Glasspar, Wildfire, Victress S1A, Allied and so on) and it’s built using steel – not fiberglass.

Let’s learn a bit more from an October, 1952 article in Popular Science. 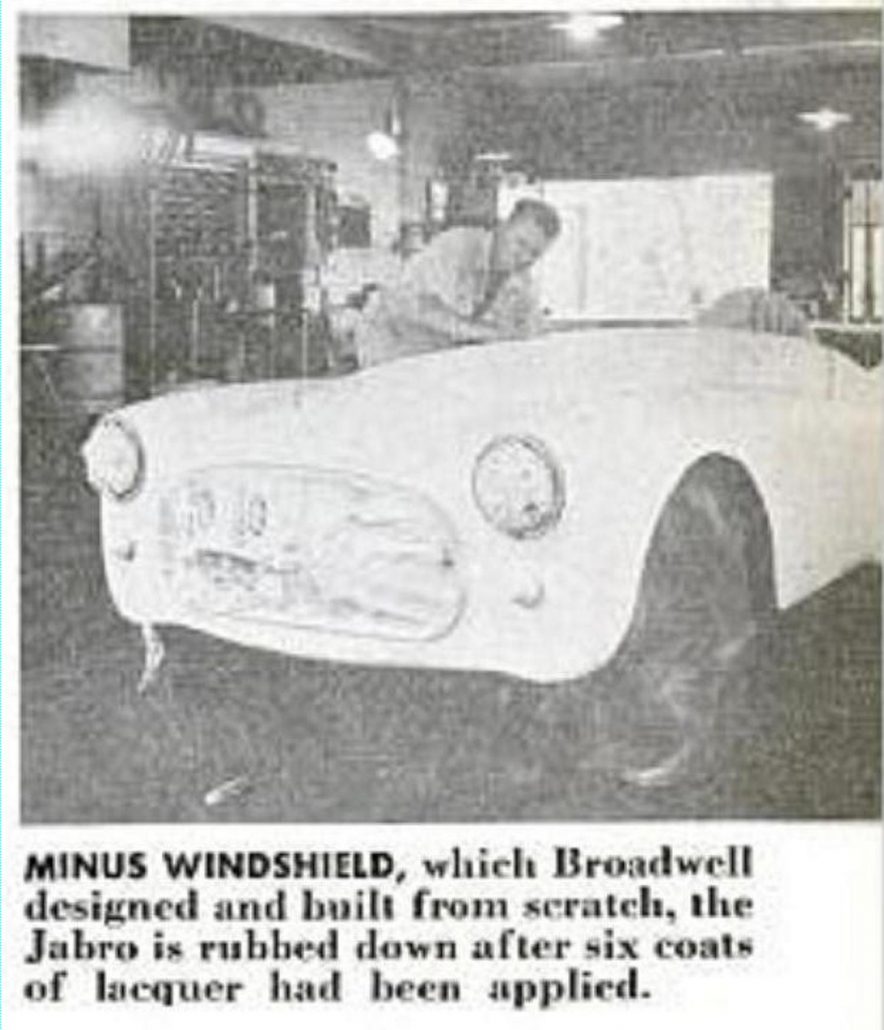 “One of the smartest looking new cars on the road this fall (1952) is a crazy quilt of parts from six other automobiles, ranging in date from 1940 to 1951.  Its owner and builder, St. Louis sports-car fan James P. Broadwell (shown above leaning over his handsome creation) put it together without help, model or drawings in his basement workshop.

The fact that his shop is stocked with $10,000 worth of tools came in very handy.  Fortunately, also, he had had the fore thought to provide the basement with a door wide enough to move the car through when it was finished.  Building the car took most of his spare time for three and a half years and used up about $3000 worth of materials.

Starting out with the wreck of a 1942 Studebaker Champion, Broadwell saved only the chassis.  This he lowered, shortened and re-welded before clamping to it the front fenders of a 1946 Chevrolet, the rear fenders of a 1940 Buick and the trunk lid of a 1941 Buick.  He then built a frame to support the fenders and lid in their proper positions. 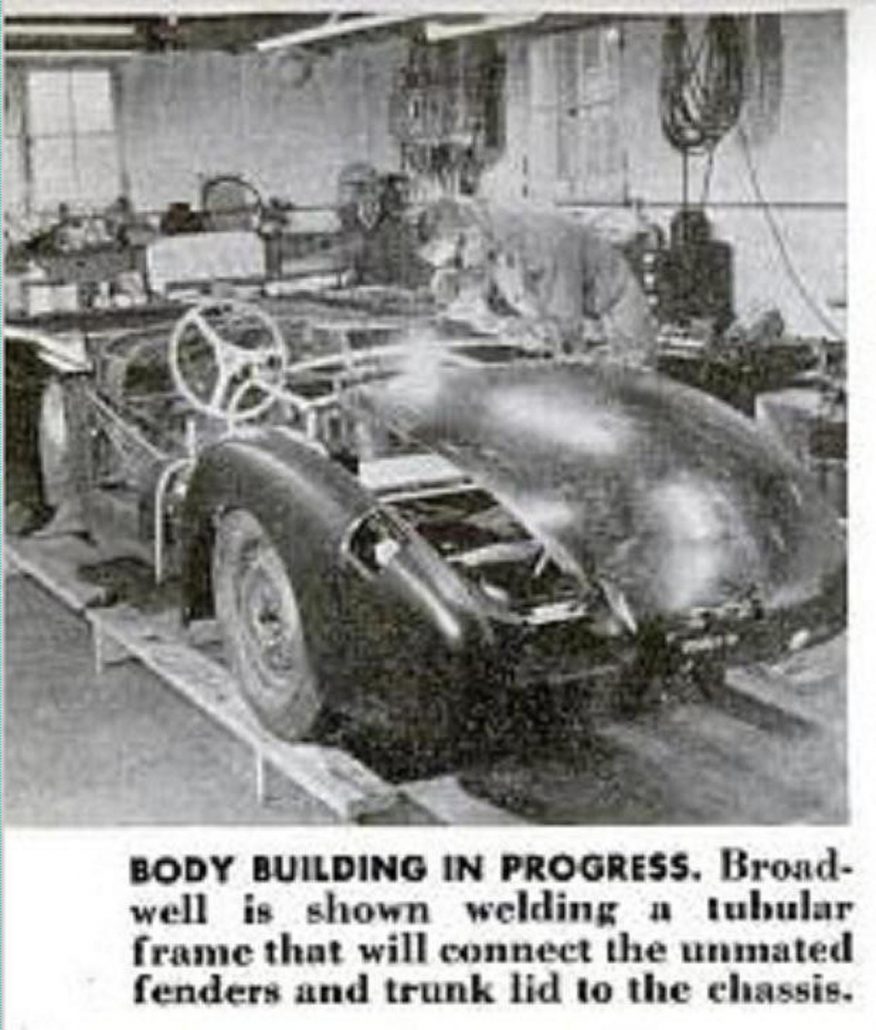 “The rest of the lines,” he says, “just fell in.”  Broadwell hand-shaped most of the body contours from cold-rolled sheet steel on a homemade metal-curving machine.  He shaped the hood from aluminum.  The engine, which develops around 125 horsepower and can drive the car to 115 miles an hour, is a Broadwell product, too, from the bottom – the original Studebaker block – up.  He re-bored the cylinders, changed the angle of the intake valves, installed a special camshaft, aluminum cylinder head and two synchronized carburetors.

Broadwell gave his low-slung hybrid a name, too, made up of parts of others.  He calls it the “Jabro,” a combination of letters from his own first and last names.”

The full article appears at the bottom of this story.  Scroll down to review. 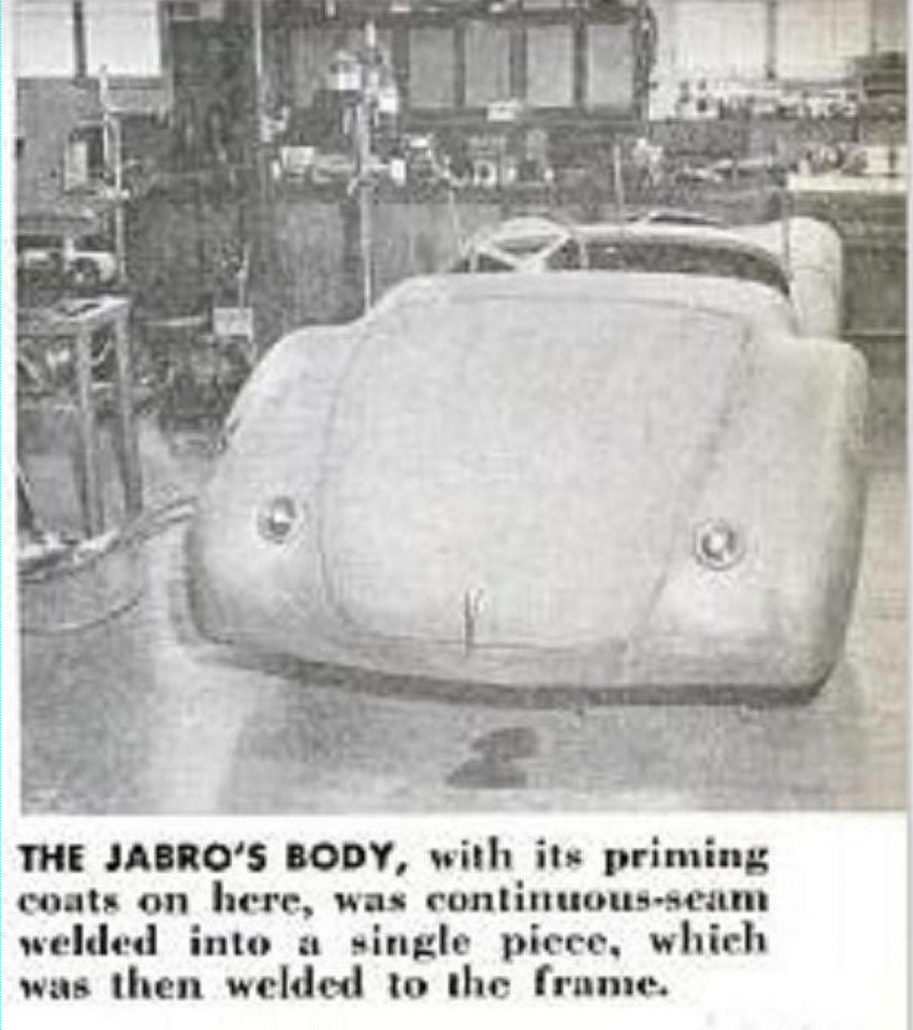 Where is this car today?  It was nicely designed and built, and there were several articles about it back in the early 1950s.  So if it still exists, perhaps one of our Undiscovered Classics aficionados will know where to begin the hunt.  What a great car with history this would be to find.  Let me know who’s up for the challenge.

And to make it more interesting, I’ll be running more articles about this car In the near future.  As I mentioned, there were several articles about the 1952 Jabro Sport Custom so let’s share them here and see what all of us can find. 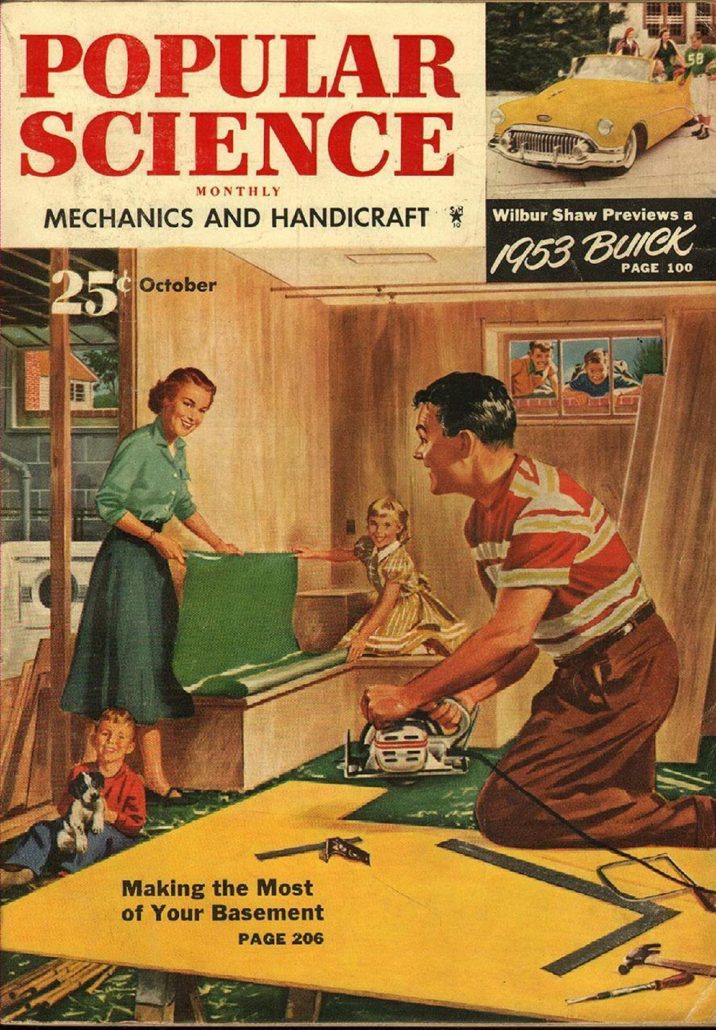 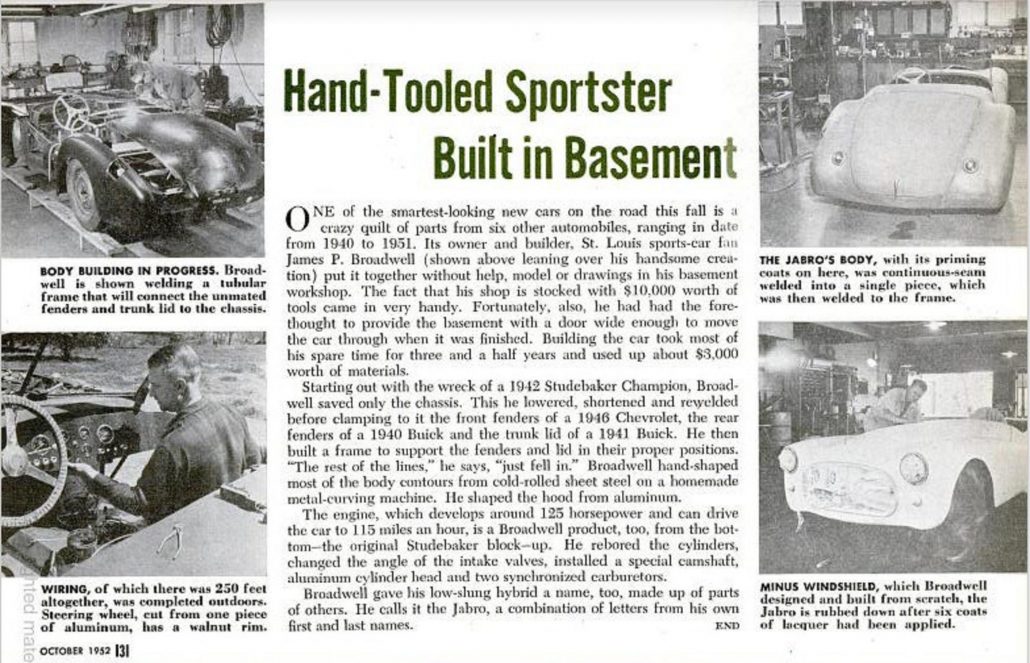 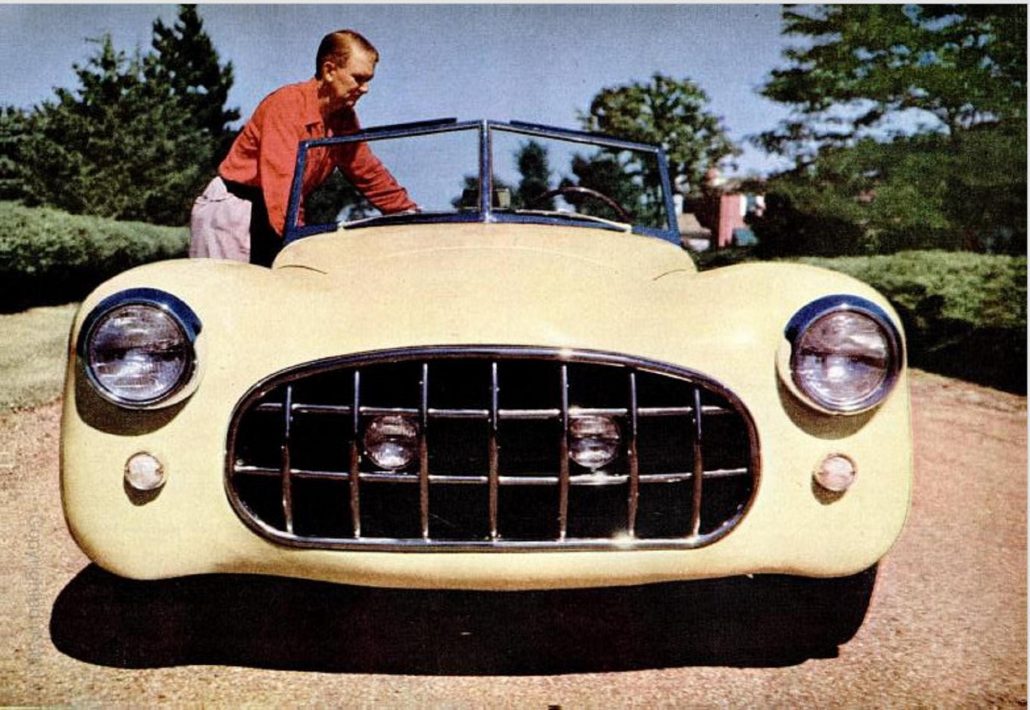 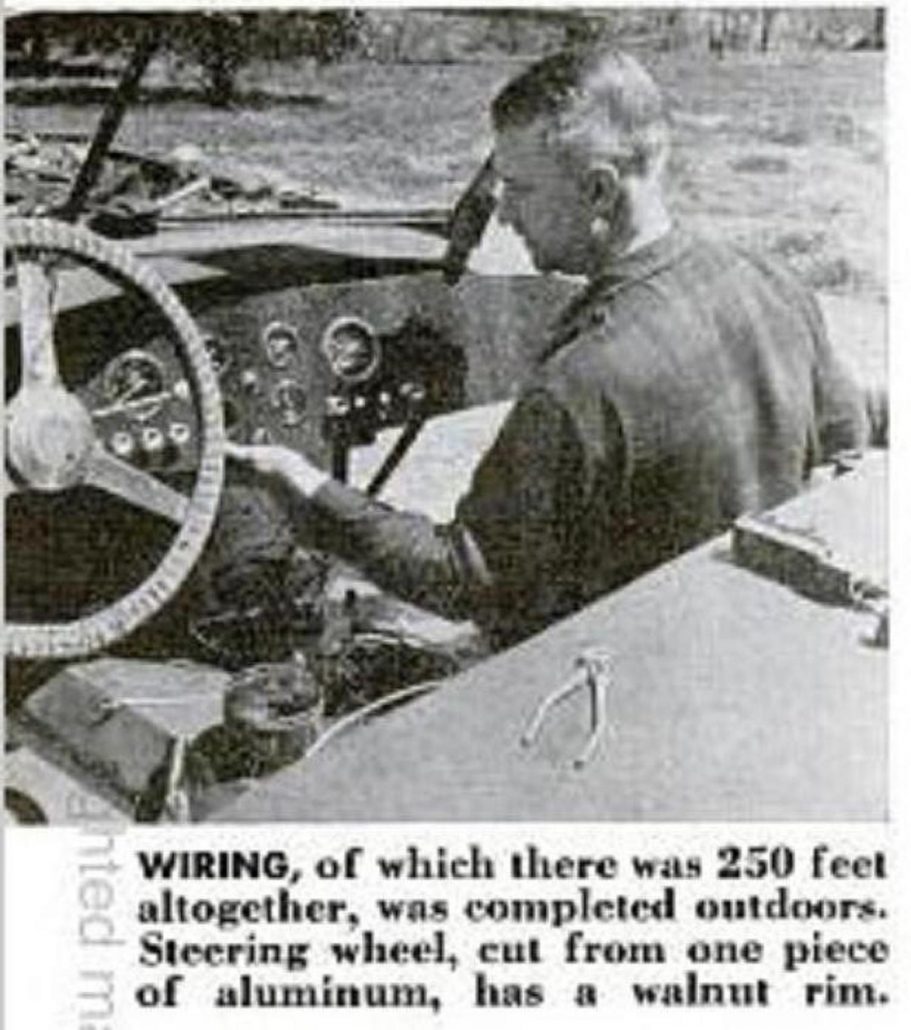