Auto Maniacs of America started in 1948 and lasted through the late 1970s.

I consider myself fairly knowledgeable about vintage automobile literature and the history of collecting it, and much of what I’ve learned has been through good friend Alden Jewell – 82 years old this year and going strong.

Alden has been collecting automobile literature since the late 1940s, and his interest in the handcrafted car marques of America has aligned with mine – albeit he collected these pieces many years before I was born.  Those of you wanting to learn a bit more about Alden’s expertise can click on the link below about the DM Nacional car.  His role in researching this car not only involved his extensive automobile literature collection, but his own direct communication and correspondence researching the marque in the early 1950s.

Recently, one of our Undiscovered Classics aficionados, Bill Grossi, posted the following question to us in the comments area of our website:

When I was a kid back in the middle 50’s I saw an ad in I think Popular Mechanics or a car magazine (I subscribed to R&T in 55) for a club called “Auto Maniacs”.  I wrote to them and received a letter back (still have it) of how to join and their benefits of providing a newsletter, brochures and other perks. I think it was $5 to join for the year. I didn’t join and am still sorry about it.  I’m still an auto maniac. Have you heard of it and know any more?

Thanks for your site.

I wrote to Bill as well as my friend Alden Jewell, and I heard back from Alden immediately.  Here’s what he had to say:

I not only have heard of Auto Maniacs.  I belonged to it for years and bought a lot of literature from them.  The name was later changed to Auto Enthusiasts.  I still have many newsletters under both names although most of the literature I bought has since been re-sold or traded.

The oldest issue I have is from February, 1956.  The last issue of Auto Maniacs of America Official Bulletin I have is March 1961.  Then there’s a gap until my next issue which is The Auto Enthusiasts Bulletin of August 1964.  This, not coincidentally, coincides with my stint in the Army.  So while I was serving Uncle Sam, the name changed to Auto Enthusiasts.

Alden went on to explain to me that he was belonged to Auto Maniacs because it helped him collect automotive literature.  But they didn’t just sell literature.  In some of their bulletins they featured short articles or notes on what was happening across America in the automotive world.  For example, in the 1961 newsletter you’ll see below, they discussed the show held in Detroit by Ford called “Sports Cars in Review.”  This is a show that I study and research that started in the early 1950s and always featured American hand built specials in their shows.  The Auto Maniacs bulletin also advertised historic and special interest cars for sale.

While Alden set about scanning some of the newsletters that I’m sharing with you in today’s story (below), I did a bit of research on the internet concerning Auto Maniacs of America.  What’s neat is that I found references to them in club magazines and other literature from 1950 thru the late 1970s.  And from what I found, it looked like they changed their name in 1962.  Alden confirmed with me that the organization started in 1948.  He believes that it disbanded in the late 1970s.  Check out one of the early ads I found for Auto Maniacs from March, 1950 below.

This advertisement was the earliest I found and appeared in the March, 1950 issue of Popular Science

So let’s have some fun and review what Alden was kind enough to share with us – three issues of Auto Maniacs over the years – with the last issue being from 1976-1977 and under their new name of “Auto Enthusiasts.”   And away we go. 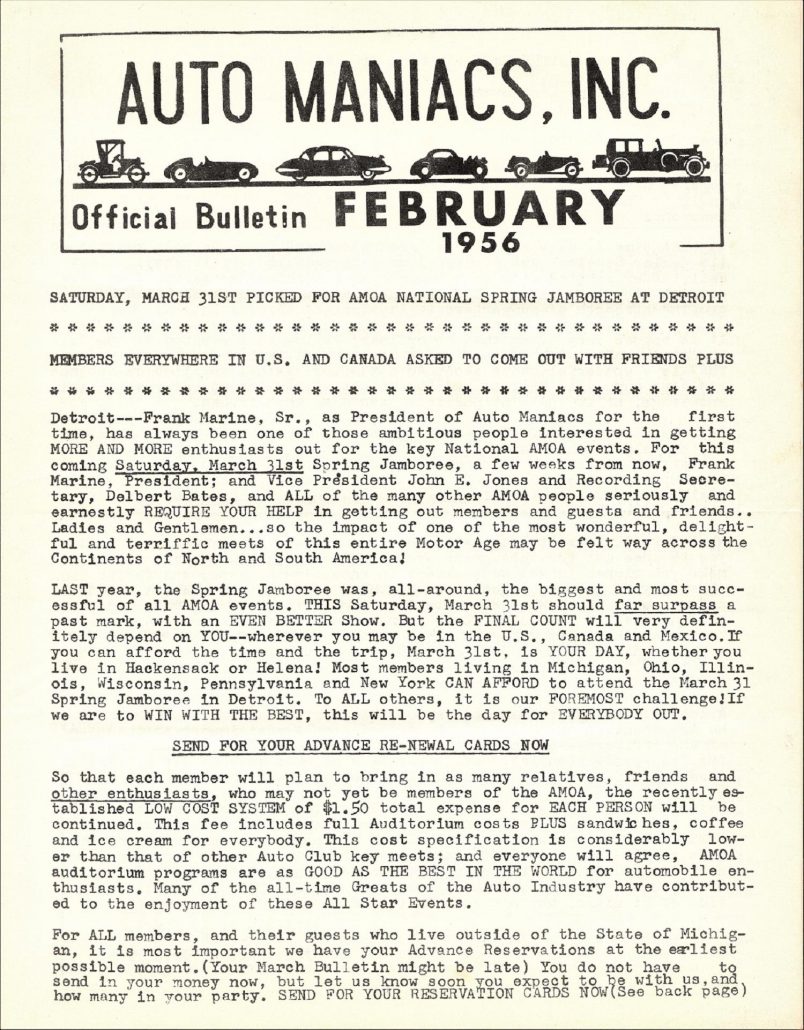 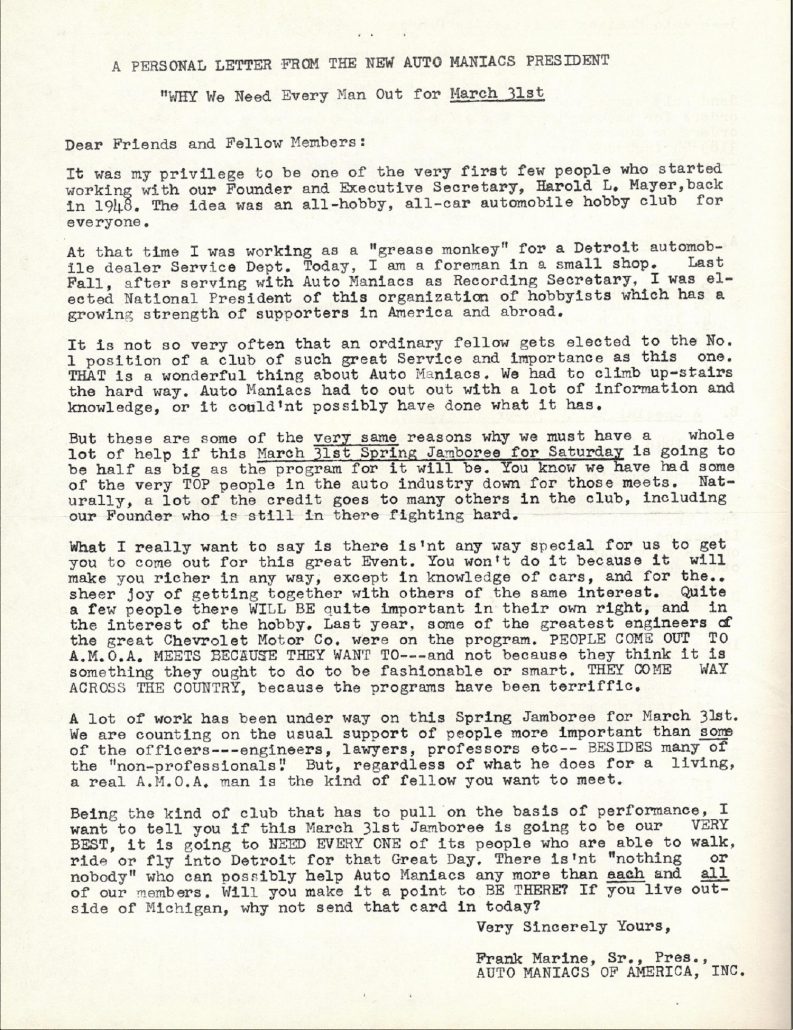 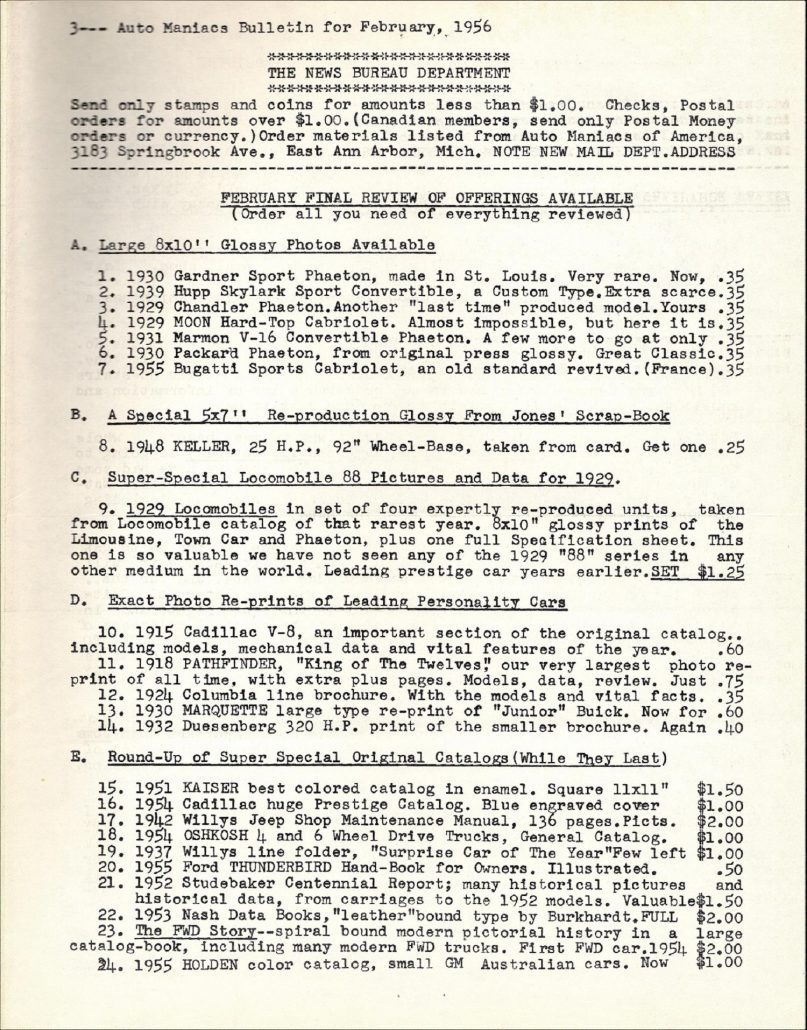 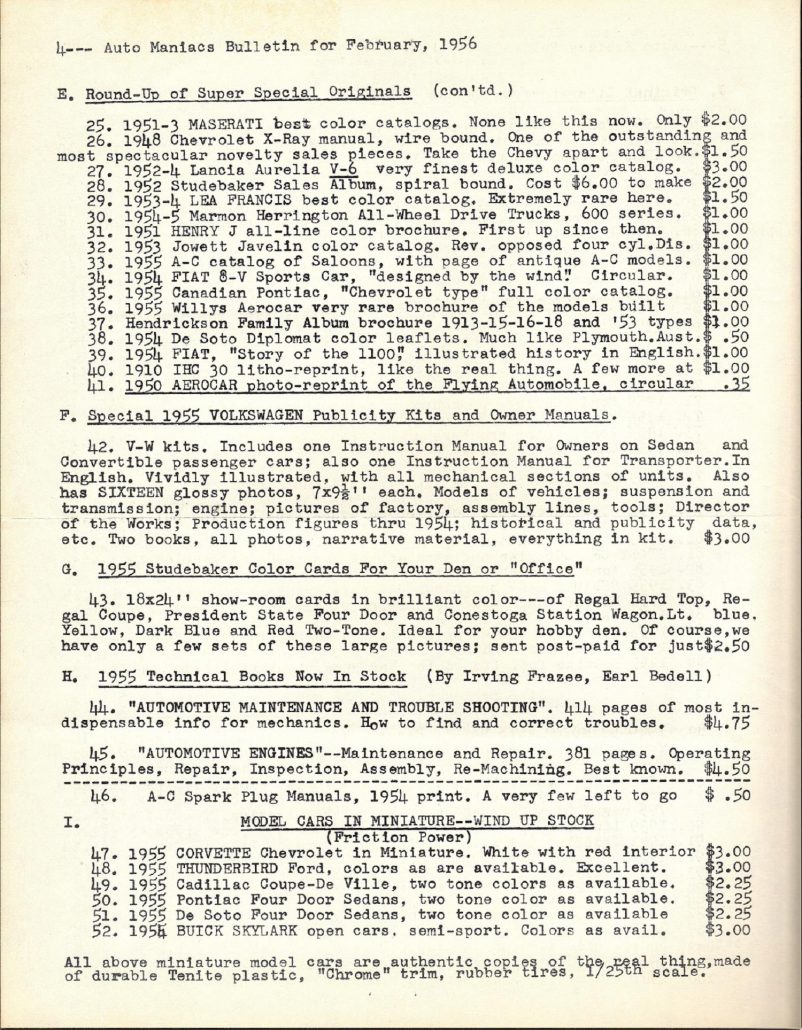 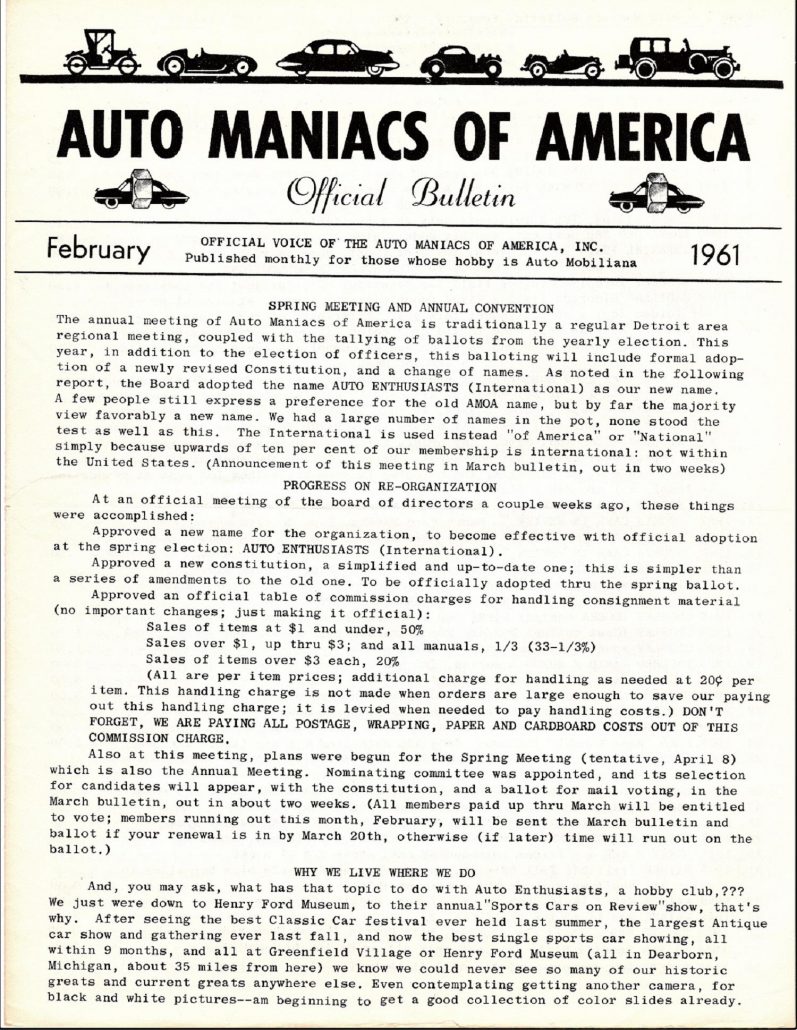 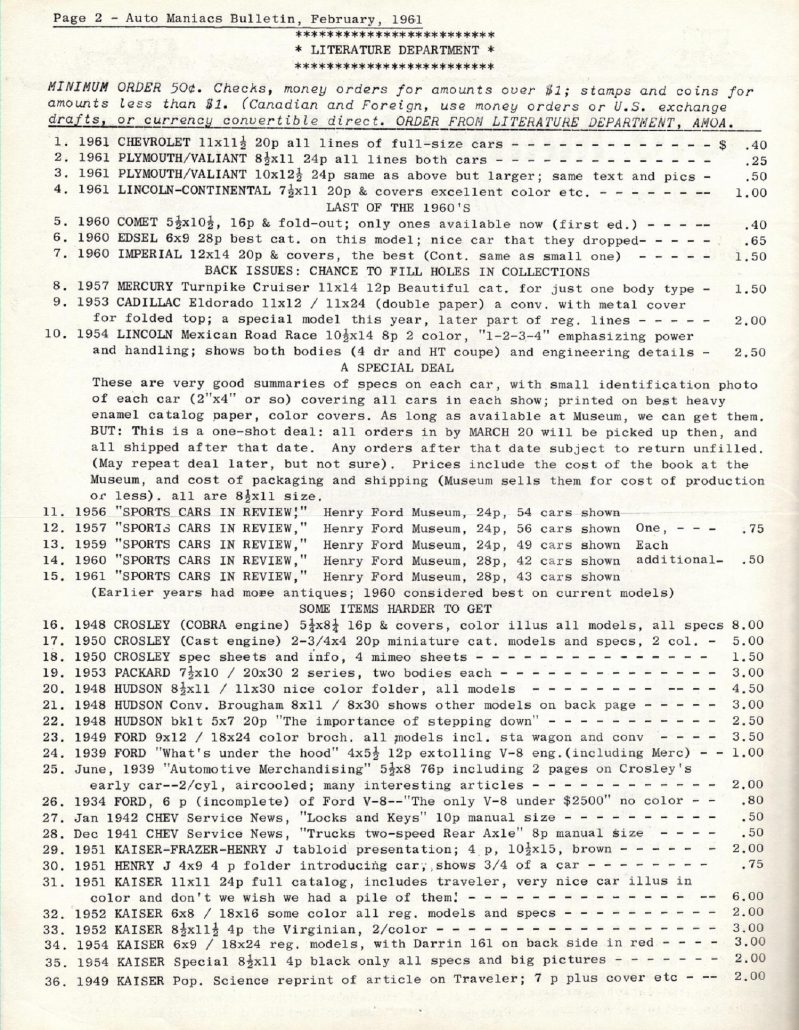 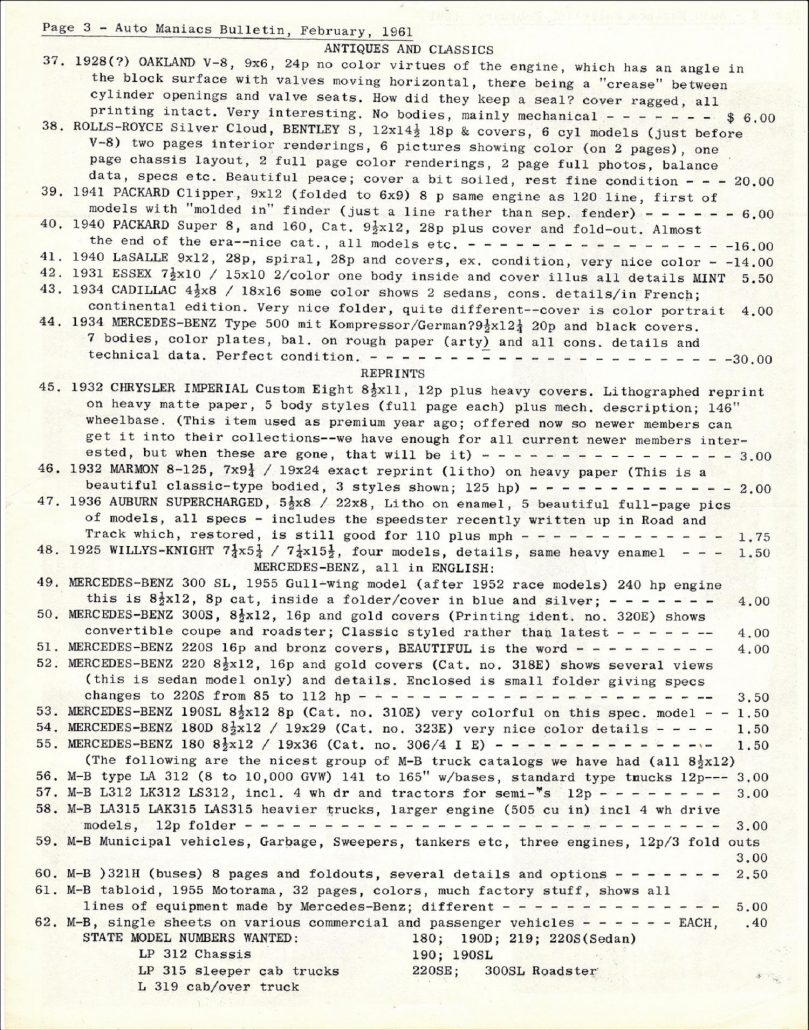 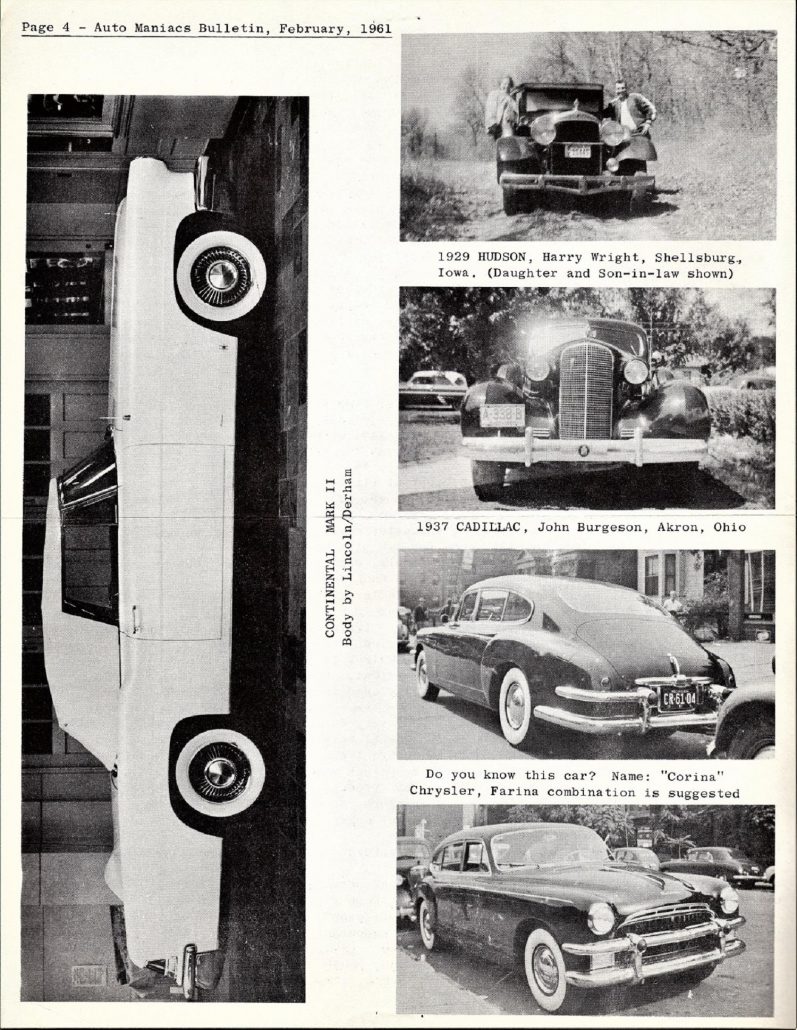 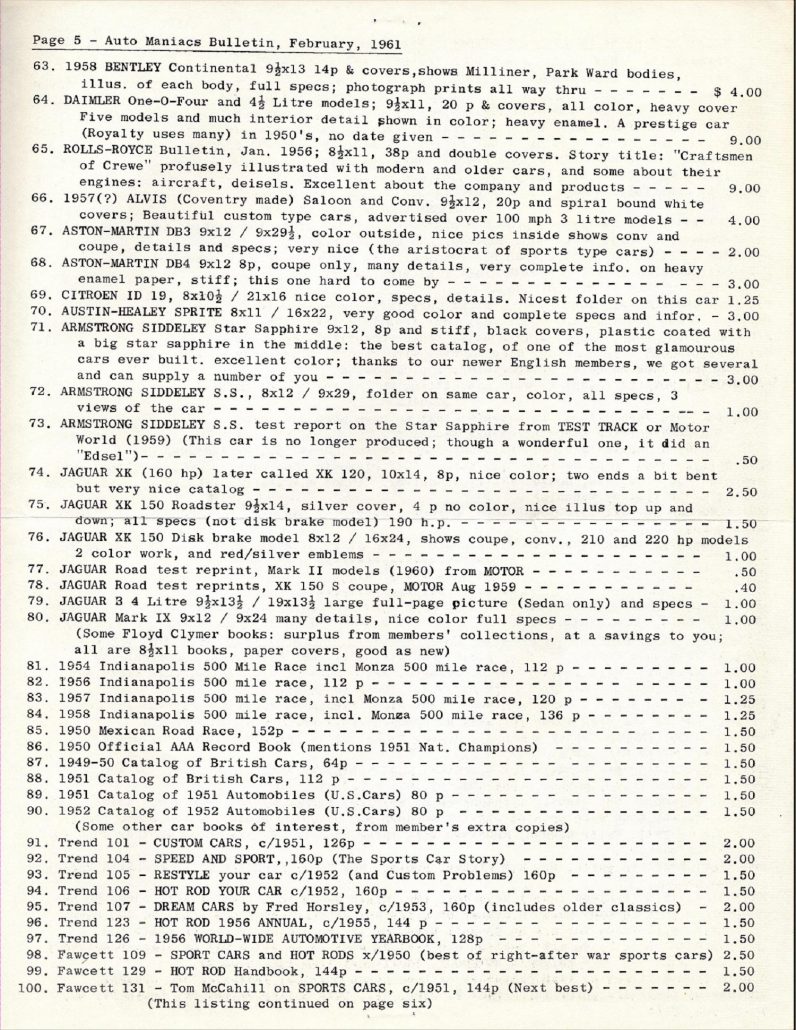 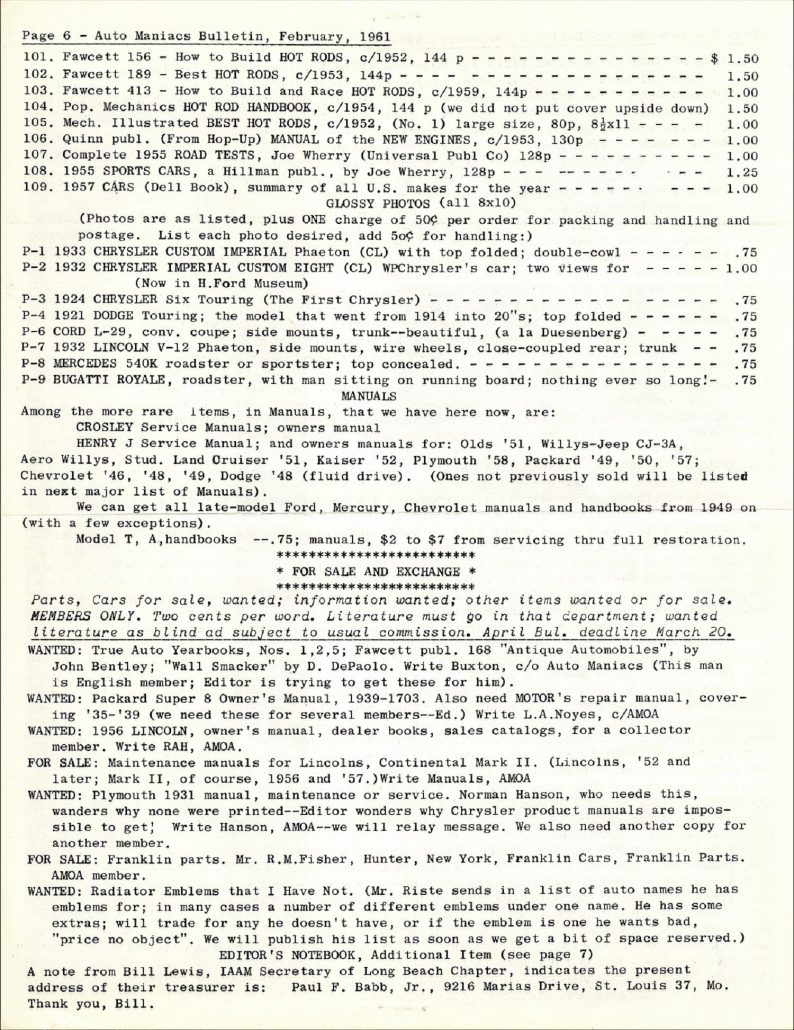 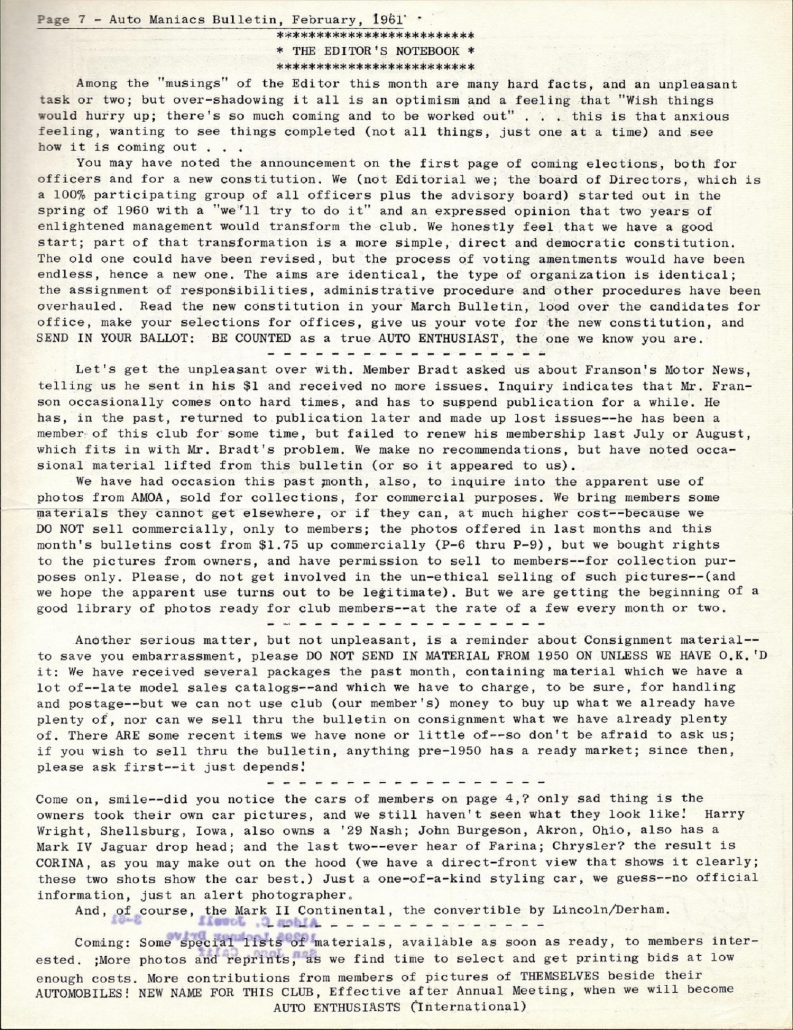 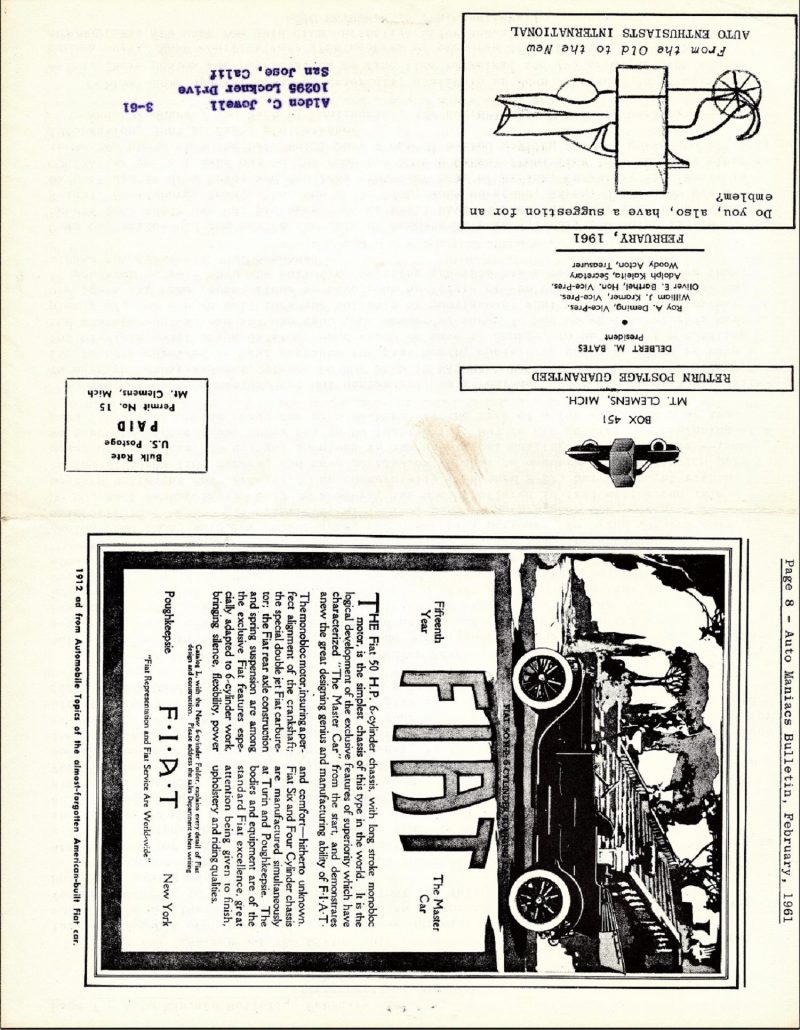 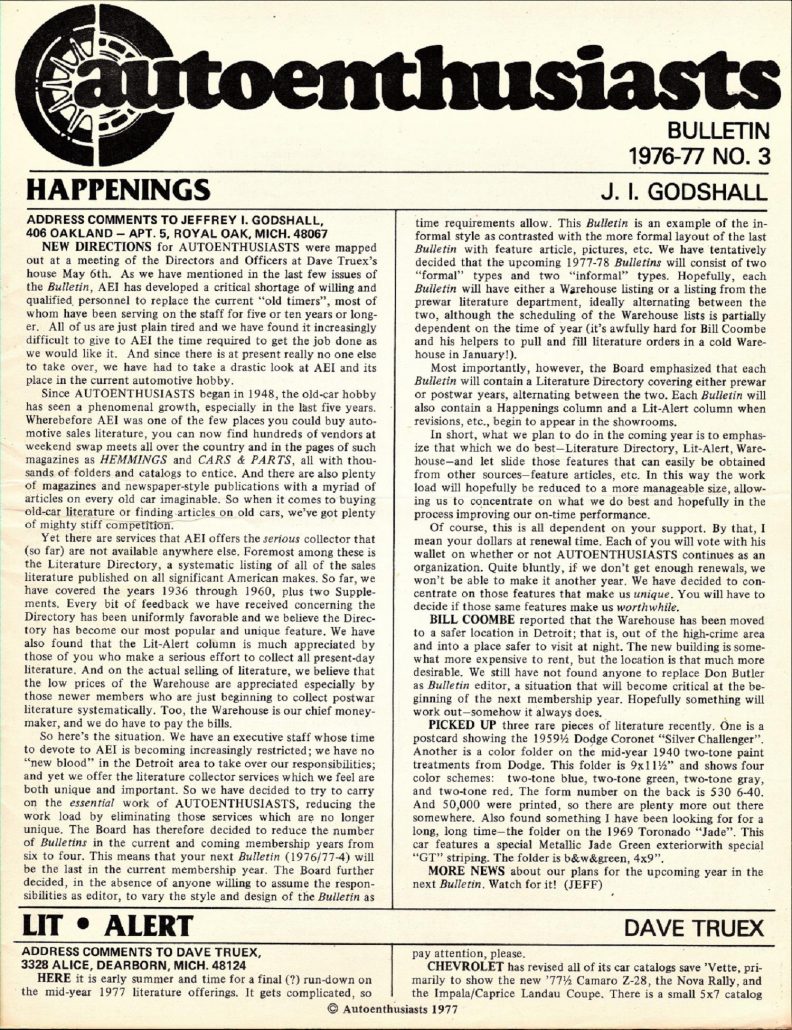 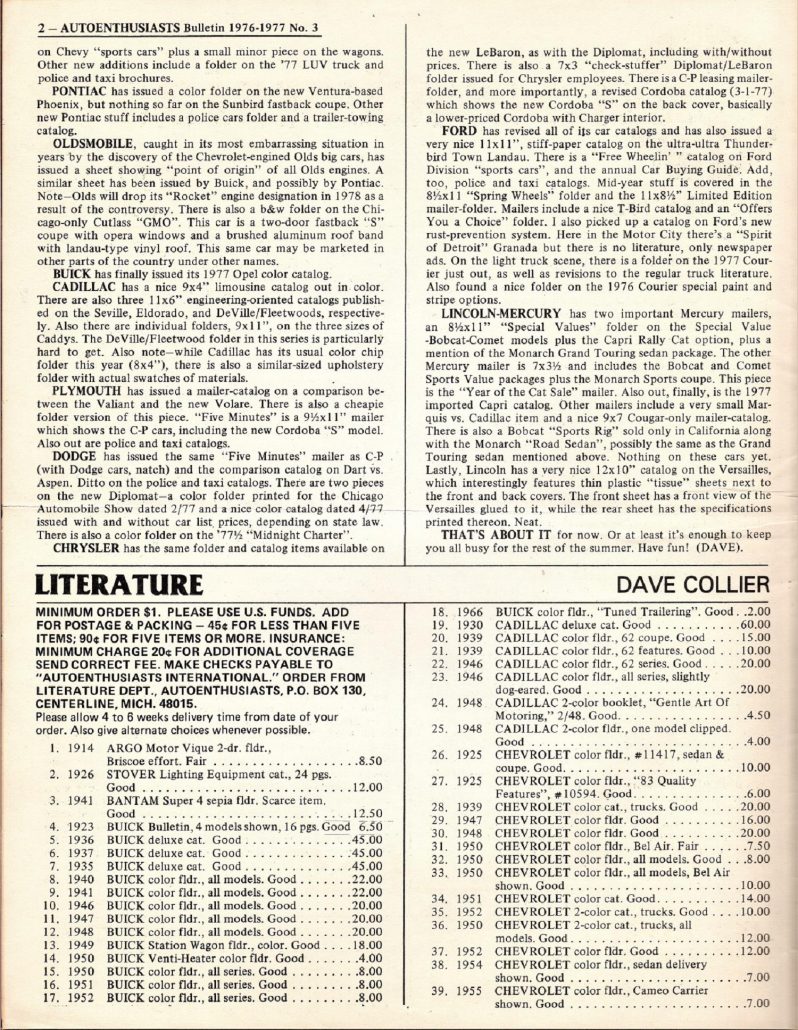 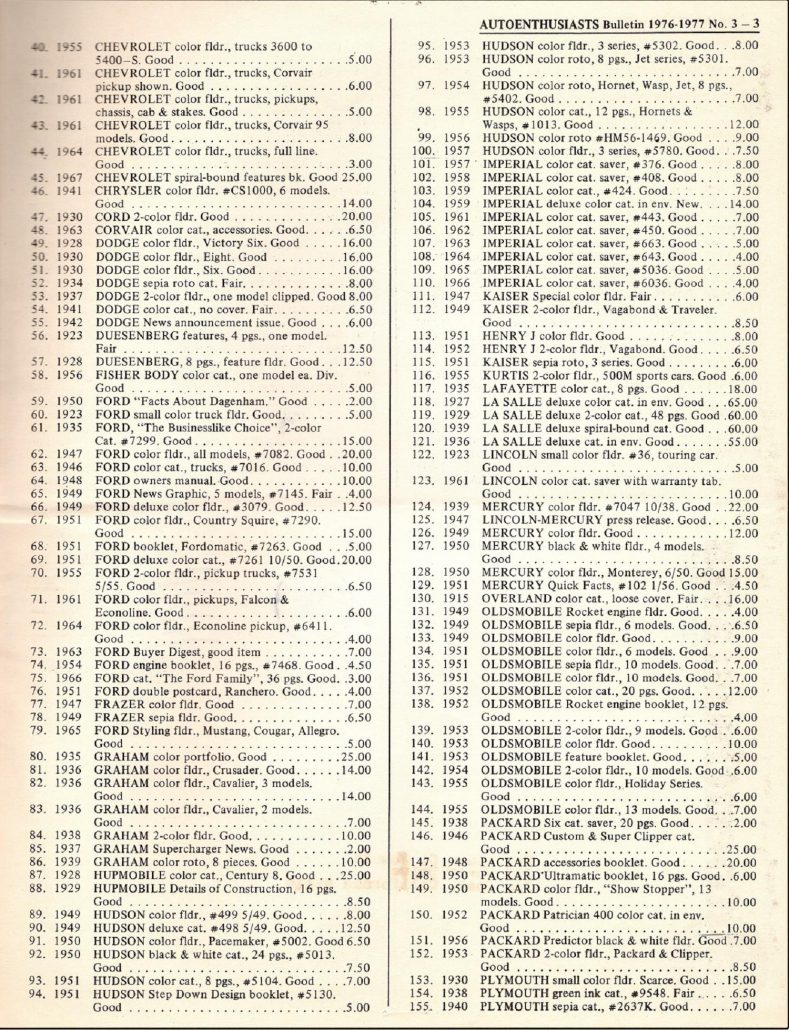 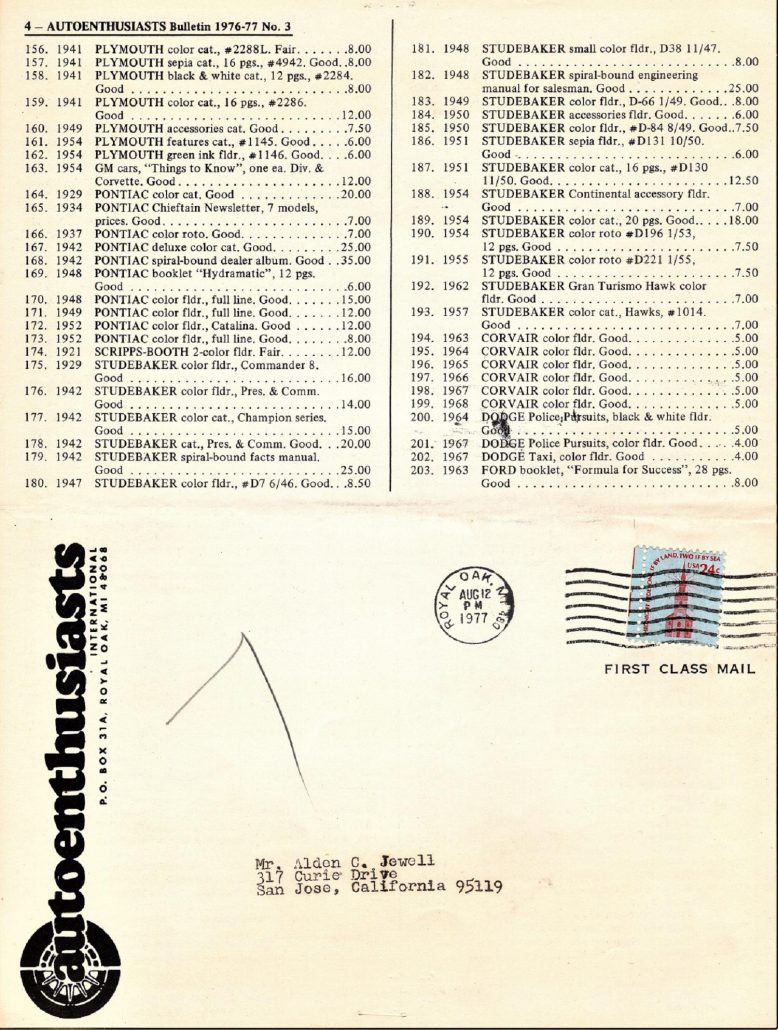 Great thanks to Alden Jewell for sharing part of his collection with us today as well as his memories of this group.  And I look forward to learning more about Auto Maniacs – an organization I definitely would have joined had I had the chance so many years ago.