I’ve known Jim Scudder since 2013 when he acquired his first Byers SR-100 out in California.  But Jim reminded me recently we actually met in 2012 at the Pebble Beach Concours d’Elegance when I was showing my 1947 Kurtis-Omohundro Comet.  I guess the meeting was meant to happen because within a year he had his first “Undiscovered Classics” sports car and we were becoming fast friends. 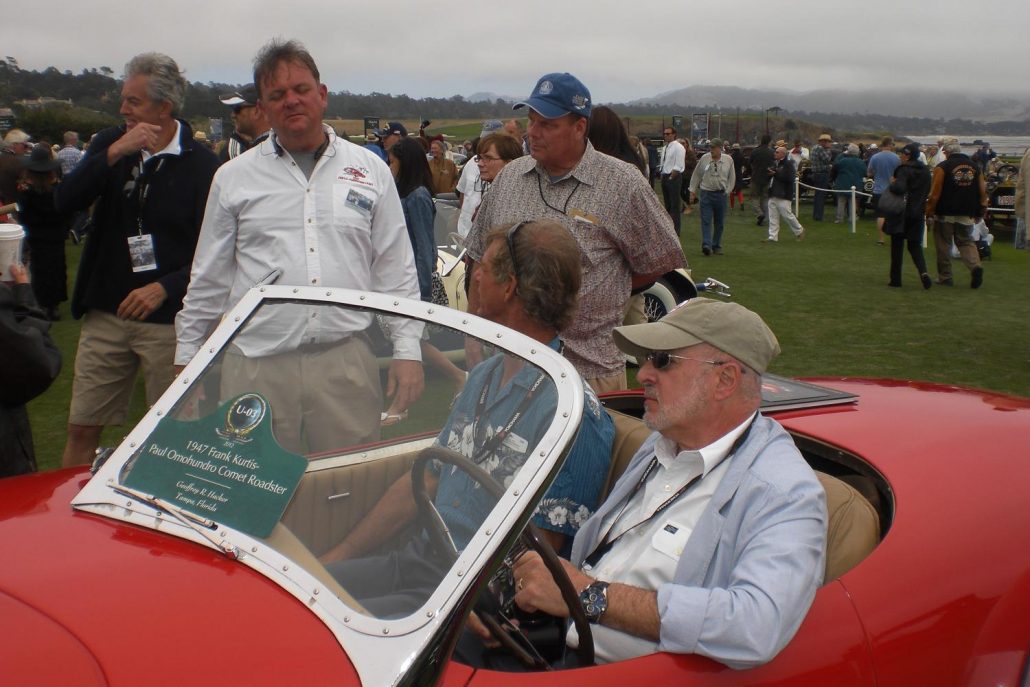 Standing Outside the Kurtis from Left to Right: Geoff Hacker and Jim Scudder at the 2012 Pebble Beach Concours d’Elegance – we meet for the first time.

Back in 2013 Jim sent me photos of the car that he had just purchased – and it was in great shape.  Let”s check out some of the photos of his car 7 years ago – before the restoration began: 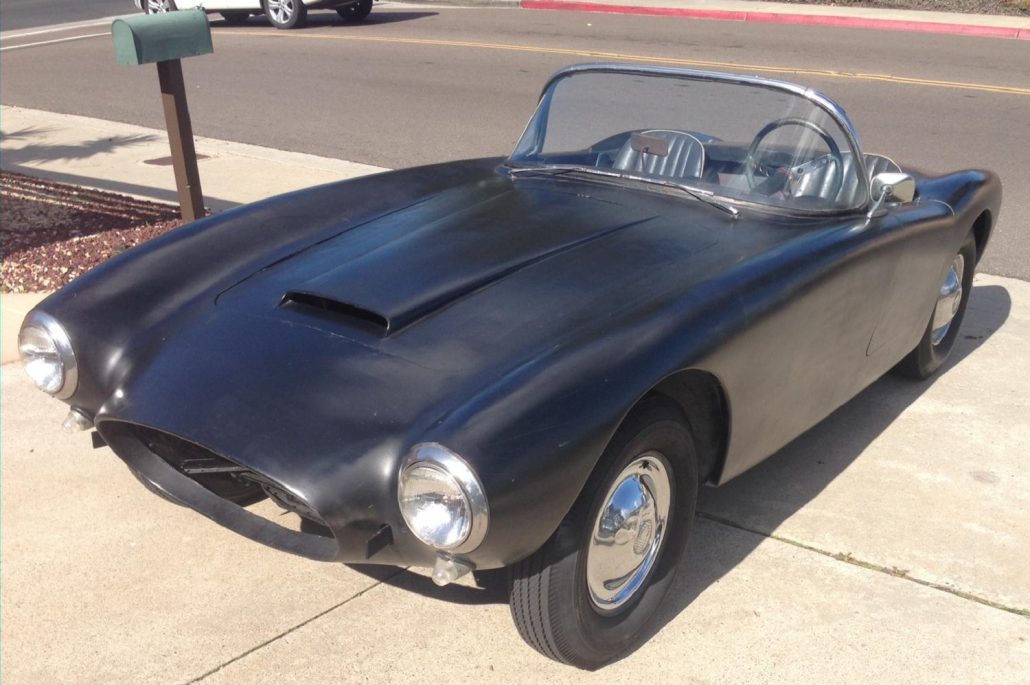 Jim’s Byers is fitted with a 1956 Corvette Windshield and Looked Great! 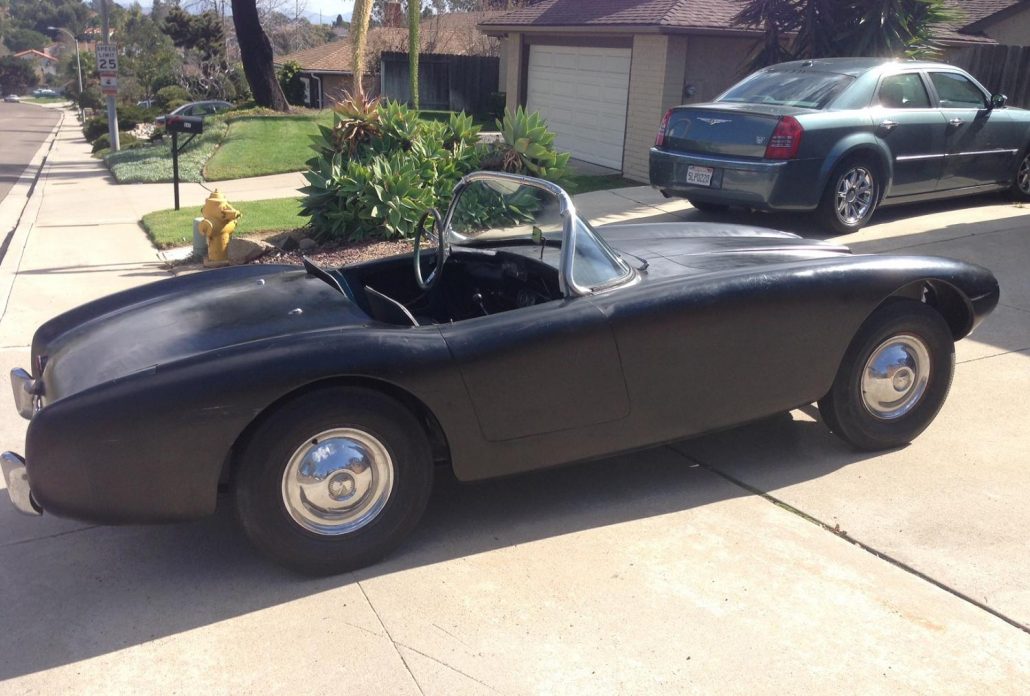 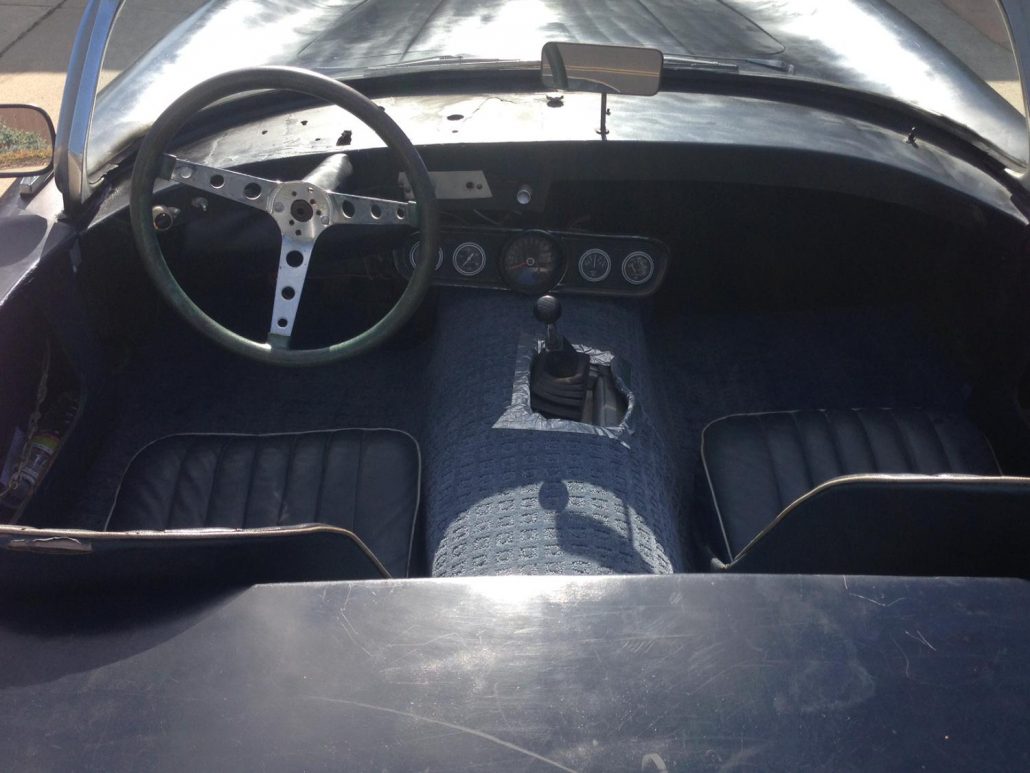 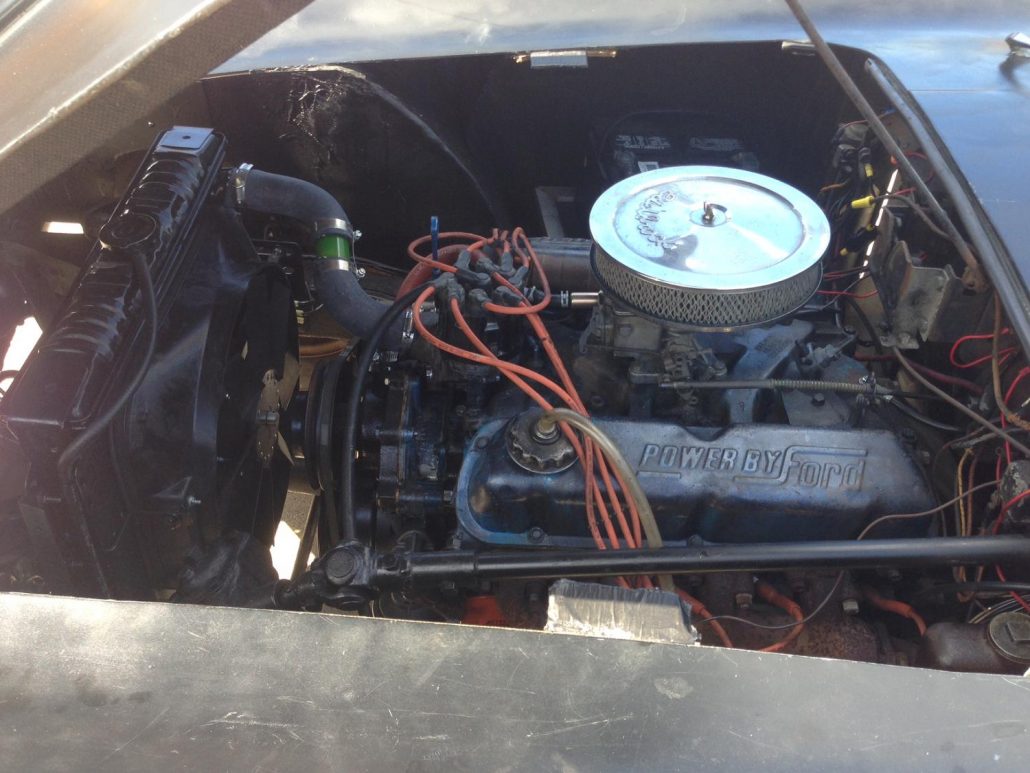 What a great looking car.  Within a few years, Jim finished the restoration of his Byers and here’s how it looks today: 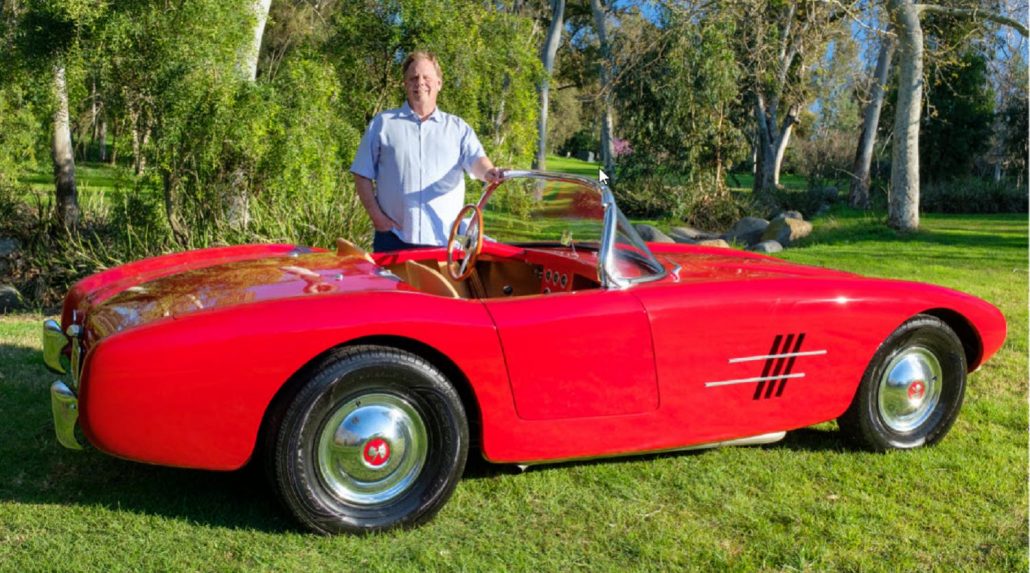 Withing months of finishing his restoration, Jim was invited to present his car on the lawn of the 2019 La Jolla Concours d’Elegance.  This really speaks to the attention that Undiscovered Classic cars receive these days – very quick acceptance and celebration at all concours.  The cars we cover are usually so rare – as with the Byers – that few if any concours audience attendees have ever seen one in person.

Autoweek noticed Jim’s Byers at the concours and photographed Jim and his Byers SR-100 as the lead car on the 2019 tour for the La Jolla Concours d’Elegance.  They posted this photo and a short story in Autoweek Magazine: 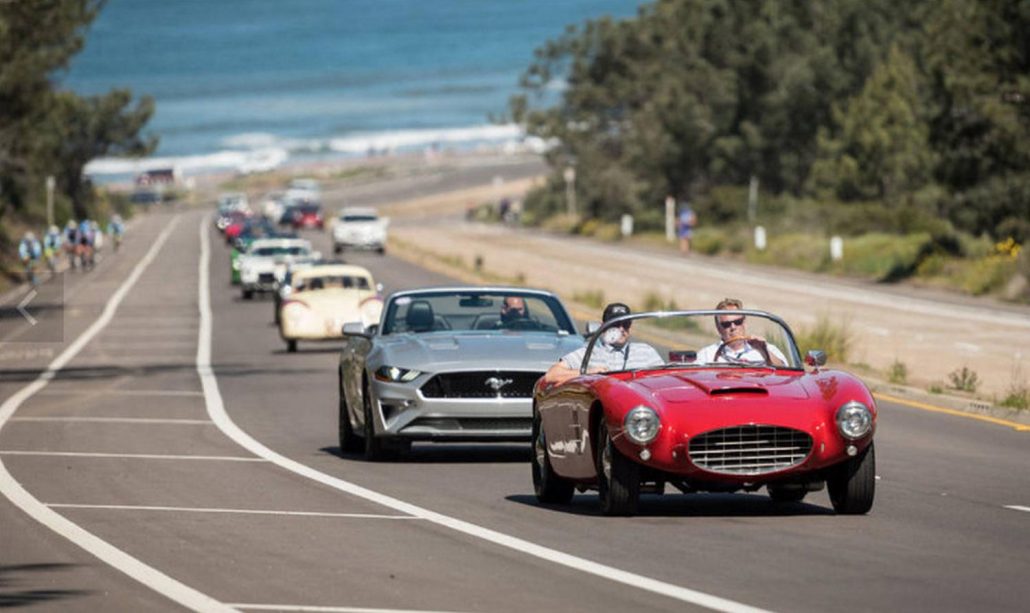 I asked Jim if he would be willing to write a story about his car – from start to finish – and his article appears below.  I’ll include additional photos of his restored Byers SR-100 sports car in the article including photos of the unique Byers badge he built and installed on the steering wheel and at the center front of the car.  Take it away Jim 🙂 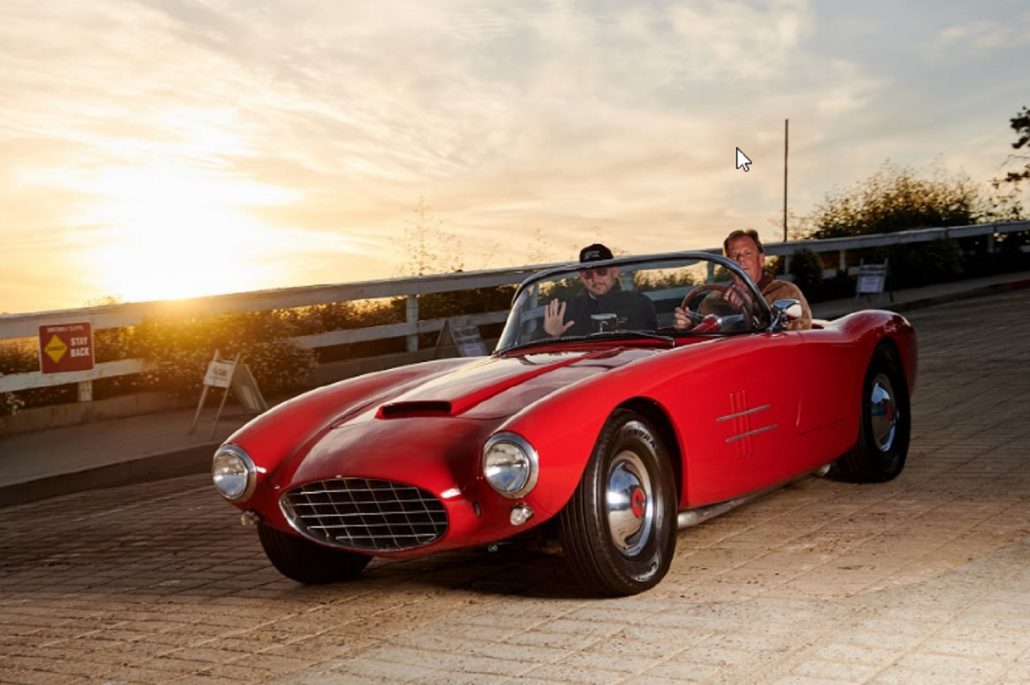 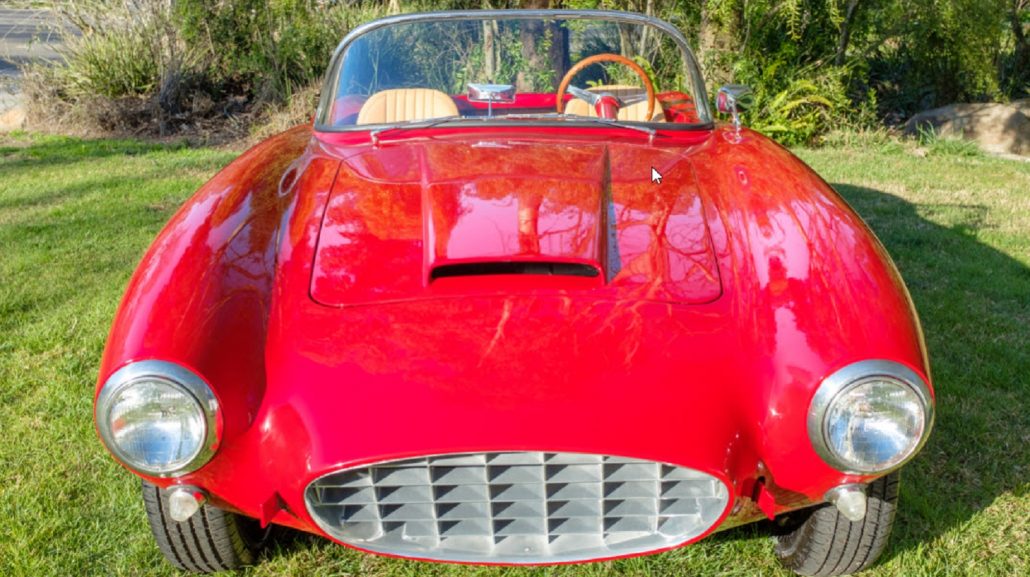 The original owner of my Byers SR-100 Roadster, Thomas White purchased this car body in 1959 after reading another story featuring the Byers SR 100, along with a 2-page cut away of the car.  Mr. White choose to put the SR 100 body on a 1953 Kaiser Henry J. chassis.  In 1968 he purchased a wrecked Ford mustang with a 302 ci motor, 3 speed manual transmission and installed it in the car.

Mr. White built the car mostly by himself.  After installation of the 302 ci he had a cooling issue with the motor and was not successful in fixing it. Mr. White decided to then park the car on the side of the garage in 1973 and was going to get back to fixing down the road.  He never finished it.  All Byers SR 100’s were built to allow 1953-1955 Corvette windshields to be easily fit to the body.  Later Corvette windshields, 1956-1962 can often be made to work.  Mine has a 1956 Corvette windshield fitted to it. 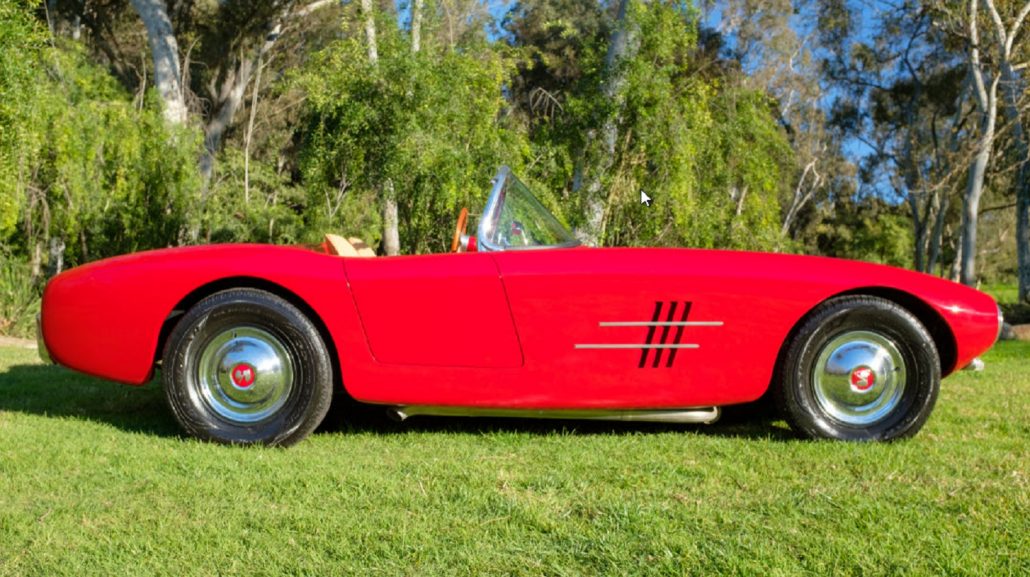 In 2012 I came across the unfinished car sitting under tarps on the side of Mr. White’s garage.  My wife and I were there to look at the house to buy, we were living about 25 miles from the coast and wanted to move to the coast.   While walking around any property you are considering buying, If you see tarps and a bit of a wheel poking out, you want to look to see what it is.  I lifted up the front part of the tarp and saw the front of the car looked something like an old AC Cobra, Ferrari, Maserati or something else.  I wasn’t sure, but the European styling was very appealing.

At that time, my wife wanted us move on to the next house to look at.   I use to do club track days and weekend events on road courses for several years and missed it, and coincidentally, I was starting to look for a car to build into race car for track events.   About two weeks later I was in the area and was thinking that if they are selling the house maybe they would sell the car too.  But what was the car? 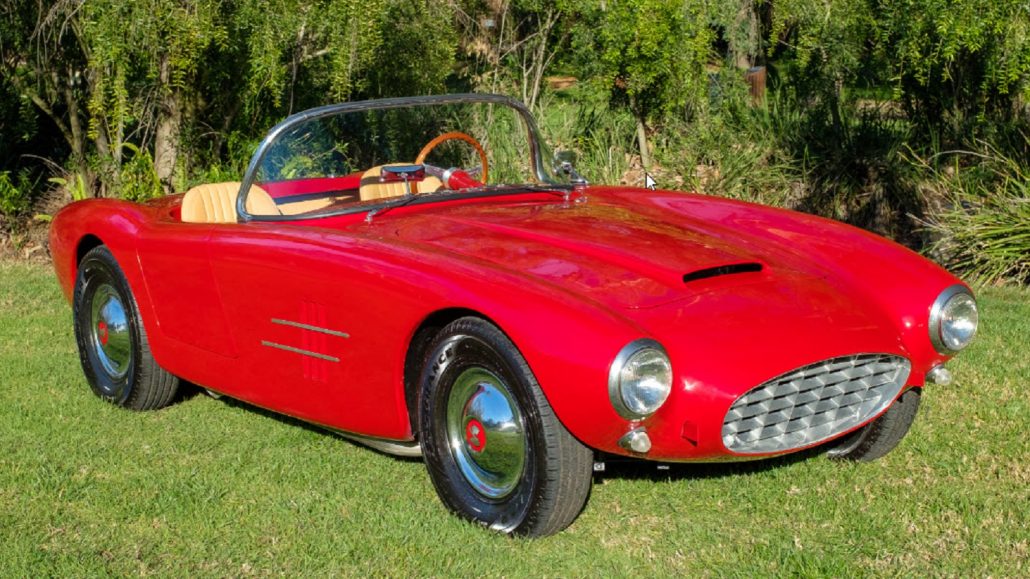 I drove down the street and pulled in the driveway.  I stopped and mentioned we saw the house and I was wondering about the car under the tarp.  We started talking and over the next hour and half, I learned something about the Byers SR-100 and a bit about the history of the car.  The person I was talking to, Thomas White, was the original builder/owner.  Still not knowing what this car was a Byers RS 100, I liked the lines and thought I might buy the car and cut the body off and put it on a race car chassis.

He said his kids did not want the car so we worked out a deal for me to purchase the car.  I went to the bank and came back, paid for the car, and got the title, and told him I would come back for the car another day.   I went home that night and started to research exactly what I had bought.  I quickly found that the Byers SR 100 Roaster was an interesting car, an all-American Sports car in built in mid to late 1950’s and through the 1960s. 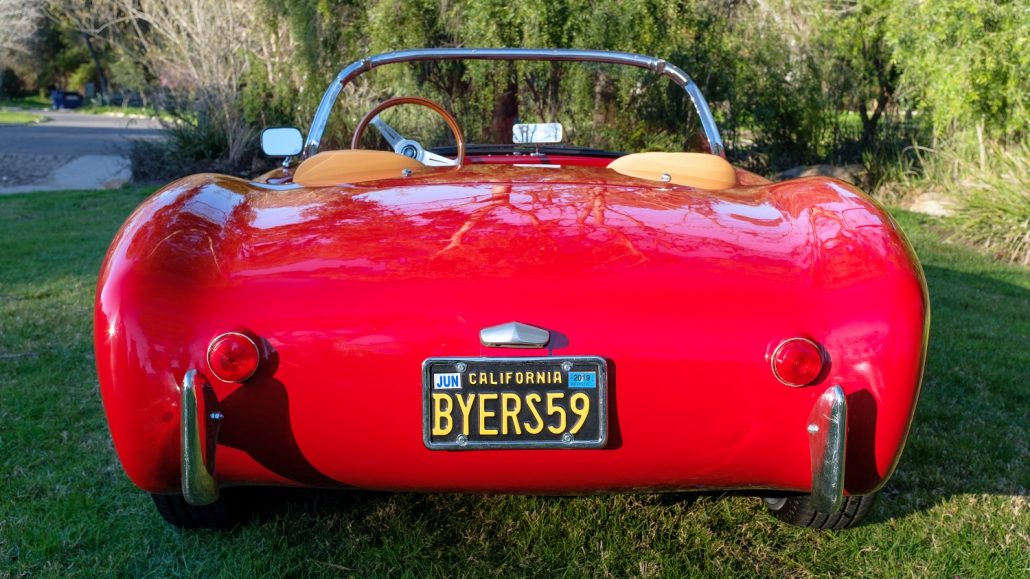 After a few weeks of finding information on the car I came across Geoff Hacker and Undiscovered Classics and decided to reach out to him.  During the next few weeks, we talked several times on the phone about the car and its history.  He had an amazing amount of information and knowledge on this small California company that built fiberglass Sport Car bodies in El Segundo, California.

After talking with Geoff several times, he urged me not to cut the body off and make a race car, and he persuaded me to finish building the car as it would have been in its day and keep it as original as I could.   I’m very glad I listened to him.  My family loves the car.  The restoration turned out great and it gets full attention wherever we go. 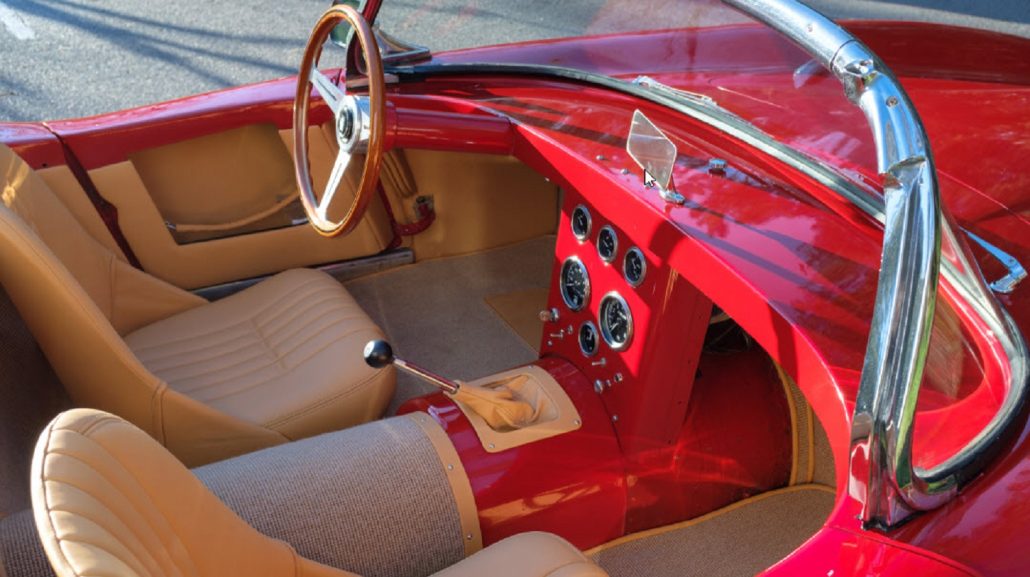 It took me about six years to rebuild the car back to as original as we could.  We followed th style of sports car for the late 50’s and early 60”s   The internet was a great source of parts and information.  Finding new taillight lens took a very long time, at a RV parts company on Las Vegas an elderly guy behind the counter said those are from old 1950’s RV, campers and semi-trailers also.  He asked the young guy to move and he jumped on the computer and within 10 minutes he found some company that had older camper lens.

This car is now a great pleasure to drive.  We plan to drive it around and up and down the coast and just cruise with it.  We have been driving it when we go out to dinner, and my wife is getting a little bit tired that we cannot go any were without some coming up and asking about the car and taking some photos.

At first she thought it was really cool and they would ask her about the car.   Now we just take our other car just go to dinner.  She really loves cruise along the coast.  I’m not a big car show guy.   Will do three shows in 2019. The first car show was in April, the La Jolla Concours d’Elegance on the grass and that was very nice.  We also did two other smaller shows with our local car club.  The main plan with our Byers SR-100 is to enjoy driving this rare and amazing All American sports car all along the south California coast with family and friends. 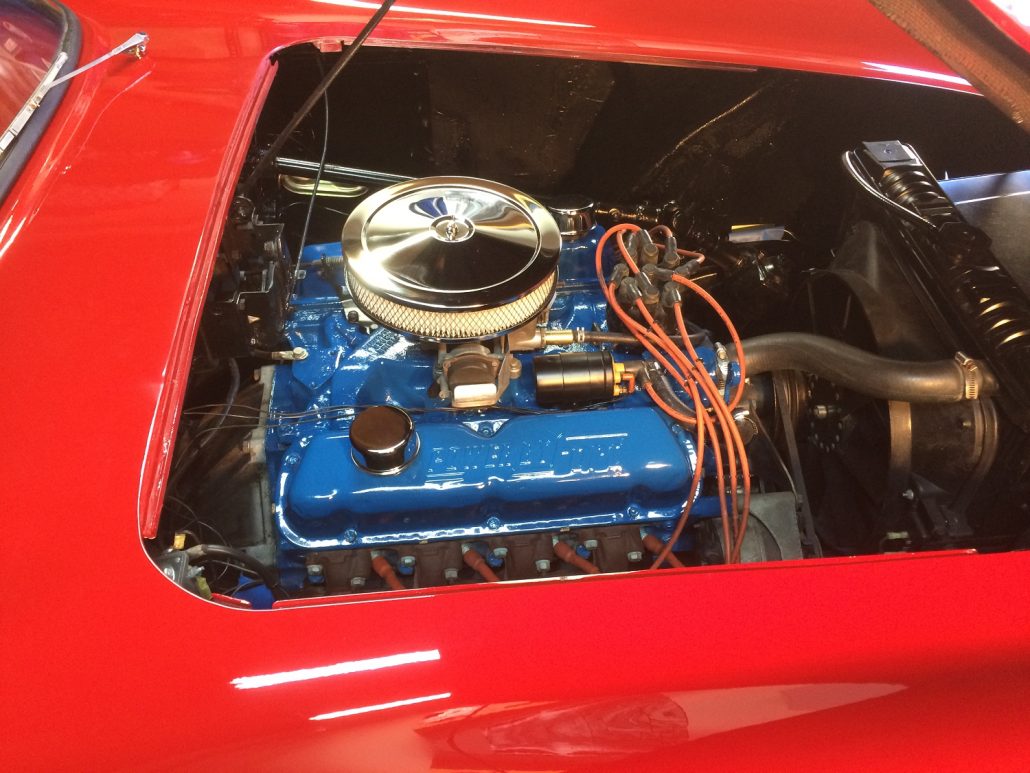 Jim also had a custom Byers badge built for the front of his car and the center of the steering wheel.  Great thinking Jim and the final result looks beautiful.  See photos of both below. 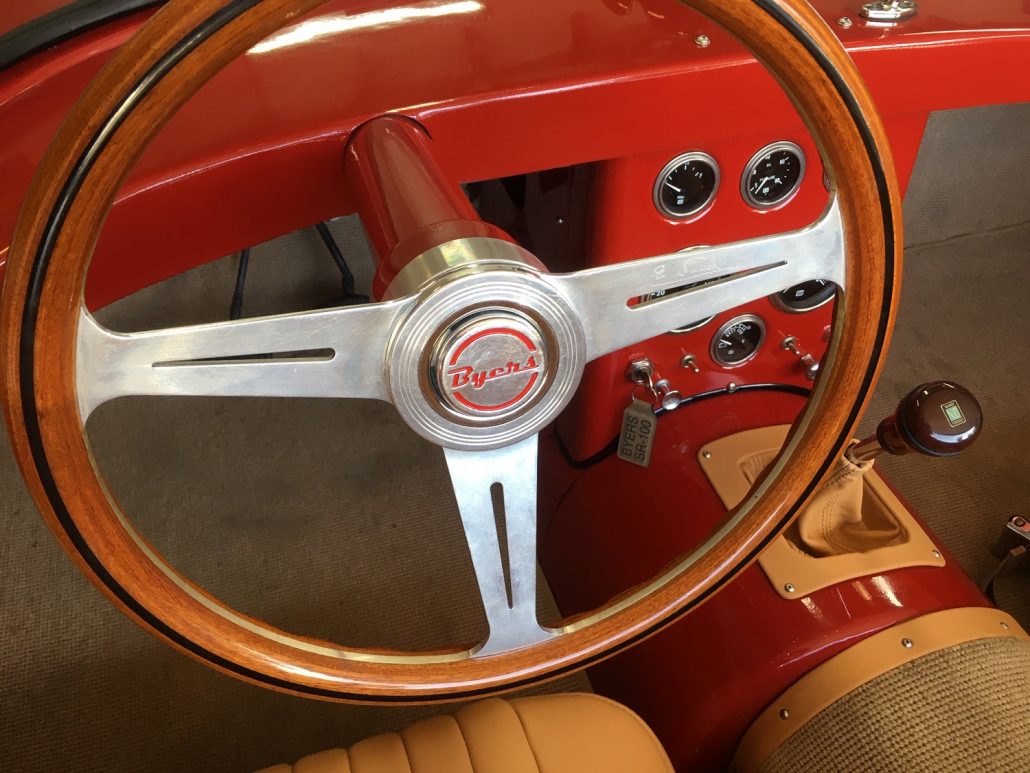 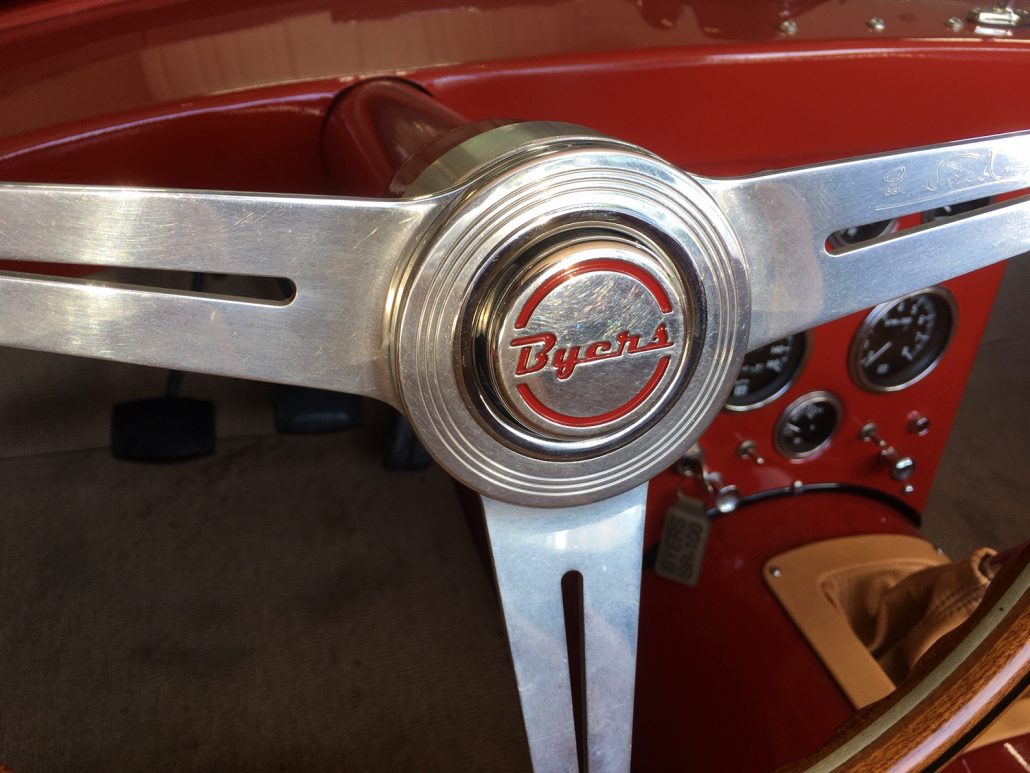 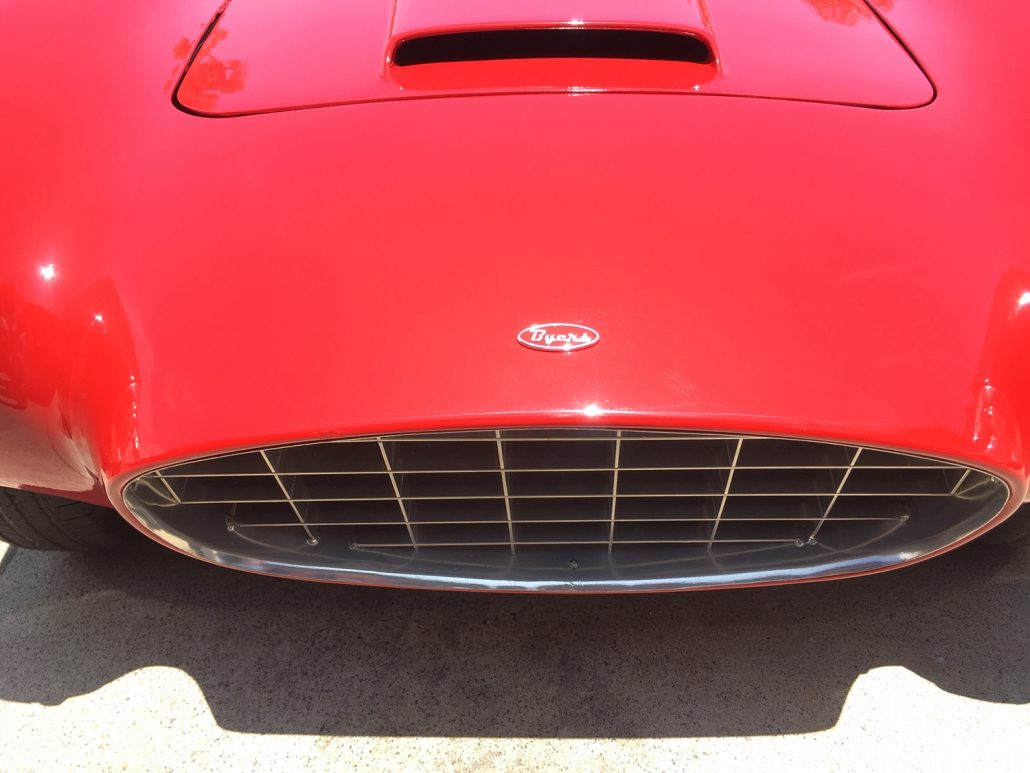 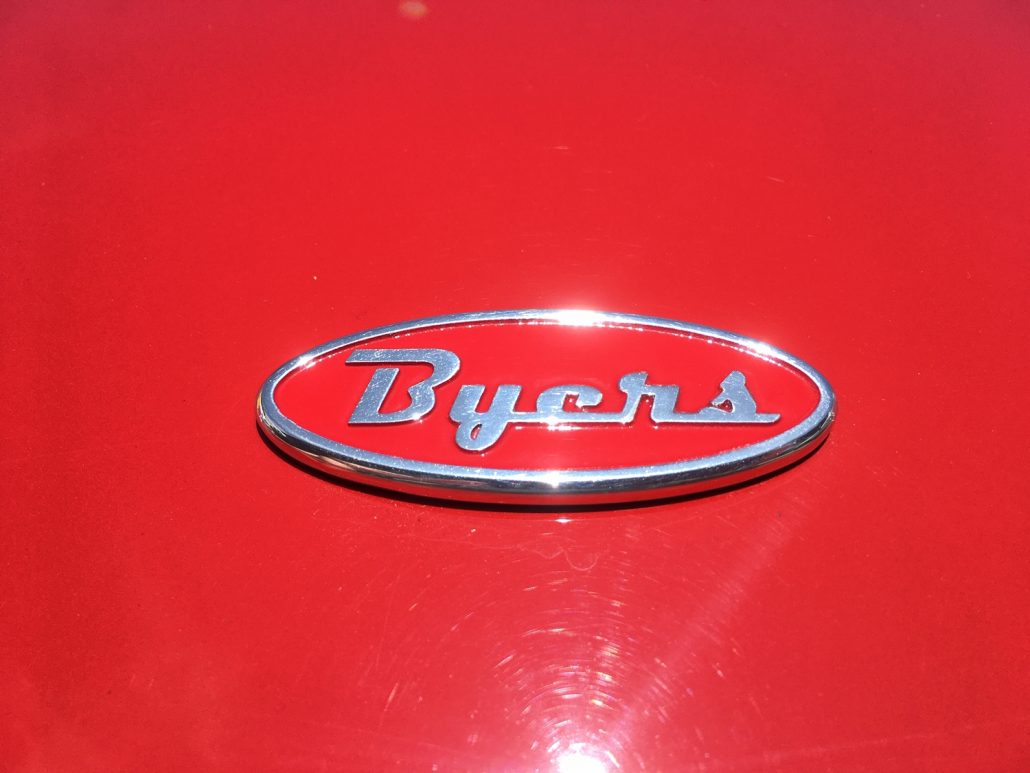 From 1955 though 1968, we estimate that around 35 Byers SR-100 bodies were built by Byers and Kellison.  A fewer number were finished as complete cars and even less remain today.  That makes Jim Scudder’s Byers SR-100 one special car.  For those of you wanting to learn more about Byers Sports Cars, click on the link below:

Byers sports car bodies are rare, but if you want to build one we have good news.  Those of you wanting to learn more about building a Byers SR-100 with one of our new Byers SR-100 bodies, you can explore the link below:

Jim sent in some photos from the Byers debut at the 2019 La Jolla Concours d’Elegance, and we’ll feature those photos soon in another story about his car, so be on the lookout gang.  Hope you enjoyed the story, and remember…