Editor’s Note:  Not a lot of pictures with this story gang – so you’ll have to bear with me.

There’s more fiberglass history to find out there gang.  And it could be in your backyard.  Anyone want to do some sleuthing in New England???

Recently, I began reviewing my collection of early SCCA “Sports Car Magazines” again to see what fiberglass gems I may have missed in my readings of past.  It turns out I had flagged a page for further review, but hadn’t followed up – and what a great story it turned out to be!

I was fueled by my recent discovery that a group of individuals led by Chad Struer of California, successfully negotiated and obtained the approval for sharing all SCCA “Sports Car Magazines” from 1944 thru 1970.  They scanned them, created a DVD/thumb drive, and made them available to the public at a modest fee for all of their effort.  You can learn more about what they accomplished and how to purchase by clicking here.

So…energized by Chad’s efforts and pushed forward by coffee, tea, and sugar frosted flakes, I started perusing my copy and lo and behold, I found an interesting story.  And it occurred at an interesting time – late in 1952.

Here in the bowels of the SCCA magazine was a story with detail about a fiberglass bodied Allard – apparently built by an American company called “Anchorage Plastics” in Warren, Rhode Island.  The article reported on “The Dam Rally” which took place in New England.  Here’s what the relevant pieces of the article had to say: 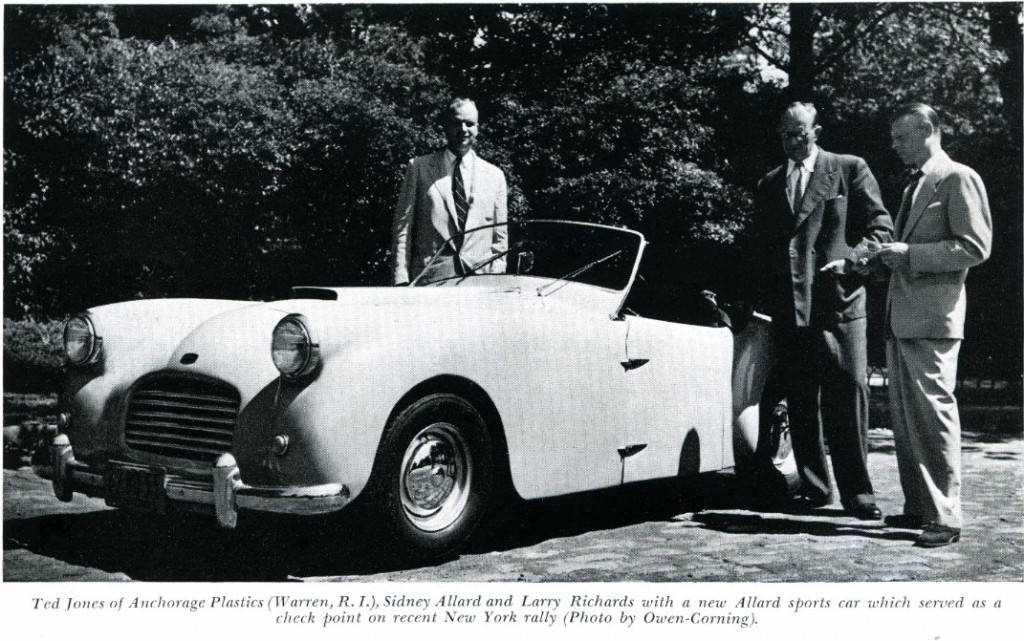 We can’t tell you where the secret check point is located,” said Honorary Starter Sidney Allard and Activities Chairman Brete Hannaway as they smilingly sent off the first car, “but we will give you a clue. It’s something new, something blue, and something very last.”  Thus began “The Dam Rally,” so-called because part of the route skirted Kensico Dam.

We still hadn’t found the secret control, and, as we drove on, we started running out of time. The last minutes of our two hours were ticking away and we were within a mile of the final control before we spied it – something new, something blue, and something very fast. It was the stunning new Allard Sports Car – then a “hush-hush” job.

Genial British car-manufacturer Sidney Allard and his associate, Larry Richards, were in charge of the secret check point and must have been pleased with the reception given their new creation. Painted azure blue, this Fiberglas-bodied car has great eye appeal.  After the end of the Rally, Mr. Richards sent me off for a spin in the new car with Brete Hannaway, and we deliberately took corners very last to see how it would react.

While it is not considered a competition car. this sports machine with tubular chassis hugs corners as if on rails; its acceleration is of the champagne-cork variety; and the three-speed gear box moves up and down the range with equal smoothness and ease. With Allard front suspension and a rear suspension that is almost identical with the Aston-Martin, the passenger has a comfortable yet stiff ride.

The net weight of the car is 1860 pounds, and the wheelbase is 96 inches. This particular car has a Ford Zephyr engine, but the buyer will have his choice of a Zephyr or Consul, and the car’s price should be under $2900. The Consul engine will be sleeved to under 1.5 litres, 1490 cc. The Fiberglas body was made here in the United States. Mr. Allard insists that this prototype is not a competition car, but he says they are making a competition car on the same chassis and fitting a 1490cc. engine that will develop approximately 80 brake horsepower.

Both the sports and competition versions can be ordered with either Fiberglas or aluminum body. Top-speed figures are not being released, but we do know the present car has exceeded 100 miles per hour. Looks as if the competition type will be a class winner!  Most of the 42 rallyites were so fascinated with the new Allard that they forgot about the final control and arrived there late.  Tex Asche, rabid Allard enthusiast, asked on arriving at the final control minutes late, “How can you possibly stop at the secret control and arrive here on time?” 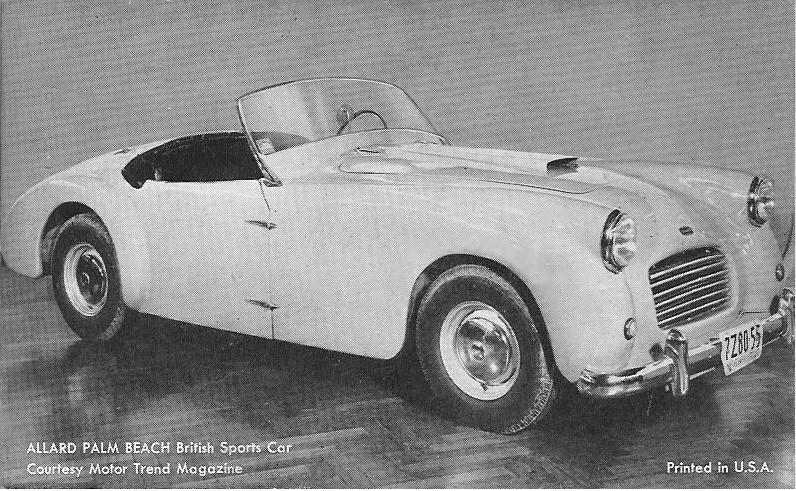 So…. How big was Anchorage Plastics?  Who owned it?  How many fiberglass cars (car bodies) did they build?  And they were in Rhode Island in 1952 doing this???   What cool questions to research!  Let’s see what’s out there.

The first thing I found out was that Anchorage Plastics was one of the “big guns” of fiberglass – just not in California.  They were located in Warren, Rhode Island and produced what was reported in Boston Post Magazine (September 2nd, 1951) as the “First Plastic Yacht Built in Rhode Island.”  That’s darn early in fiberglass, and quite an accomplishment too.

W.J.H. Dyer was president of Anchorage Plastics back then, and I found the information below about the company and its history on the following website: http://www.dmcboats.com/arionBP.html

“During World war II plastic construction of many things came into being and attracted a great deal of attention. At the war’s end boat builders on both the Atlantic and Pacific coasts began experimenting with making small boats and the Anchorage Company started work with it in 1946. The company made its first plastic boat in 1947, in Detroit, and from then on it really concentrated on plastic boats.

The Anchorage Plastics Corporation, as a subsidiary of the Anchorage Company, was formally organized and the construction of plastic boats was transferred to it. It built some 500 reinforced plastic boats, most of them between 9 and 16 feet long. The parent company continues to make wooden boats.”

Investigating a bit further, I located an online book, compliments of Allard Motor Works, titled “A Short History of the Allard Motor Company: 1936-1959.  You can review this online book also by clicking here.  In this book, further information about the fiberglass Allard cars is revealed as follows:

“In 1952 Allard realized that he needed to revamp his product line. The first concern revolved around bringing out an inexpensive sports car. This car, to be called the Palm Beach would be based on Ford of England’s small cars the Zephyr and Consul. Prices would be kept down by utilizing as many parts from these cars as possible. The frame would be tubular steel, manufactured on jigs, and the choice of engines being limited to a 4 (Consul) or a 6 cylinder (Zephyr).

The original body design was to feature disappearing headlights and a familial resemblance to the J-2X Le Mans mentioned earlier. The resulting design raised howls of protest from Allard’s North American distributors and the design was rapidly changed. However there was interest in producing this car as originally designed in the US and Anchorage Plastics of Providence, Rhode Island actually built some bodies in fiberglass to prove the viability of the project.”

Interestingly, the same publication shows Palm Beach model with the following note: “Early Allard Palm Beach, circa 1952. This is the original design, minus the disappearing head-lights. This is also the design used by Anchorage Plastics to build several fiberglass bodies for Palm Beach chassis. At least one survives today.”

So there you have it.  Another firm producing a fiberglass car – and perhaps assembling it on the Allard chassis – back at a time where fiberglass cars were not yet a full year old (introduction occurred at the November 1951 Petersen Motorama).  History indicates more than one was made, and one fiberglass Allard may still exist.  How neat!  Our next job is to figure out where this is and get some pictures too.

There must be a Motor Trend article about this initial fiberglass Allard Palm Beach.  One of the photos I’m using in this story is a postcard from Motor Trend showing this very car.  Time will tell.

Also, it’s interesting to note that the photo that appeared in the SCCA Magazine was credited to Owens Corning.  I’m guessing they were the resin/fiberglass supplier to Anchorage, but that’s yet to be determined.

Finally, I hope to solve one last piece of the puzzle soon.  It turns out that Anchorage Inc – the parent company of Anchorage Plastics – is still around.  You can visit them at the following website:  http://dyerboats.com/home/    It’s my hope they may have some history to share with our group that will be further revealing and relevant to the history of fiberglass sports cars in America.

And one final thought….who owns the fiberglass Allard Palm Beach today?  Maybe there’s more than one around…

Don’t forget… this is not the first time I’ve written about fiberglass and Allards.  Some time ago we covered the three-wheeled Allard Clipper produced in the UK.  Click here to read about the Margaret Wolsey and the Allard Clipper.  I wonder how many more times the “Allard” name and “fiberglass” will rear its head in “Forgotten Fiberglass?”

Thanks again to Chad Struer of http://www.sportscarscan.com/ for making this information available with our group and for digitizing such a large body of work for enthusiasts worldwide.  An impressive endeavor – and accomplishment – in every way. 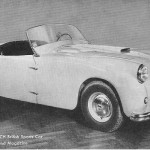 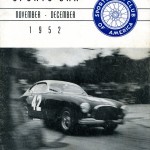 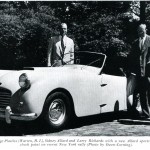 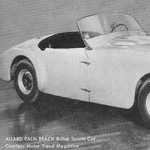