Bill Berry and your Falcon…..where are you???  Read on to learn more….

What a great find this is that we’re sharing today.  I first saw this car in the 1955 Petersen Motorama program (known in 1955 as the 6th Annual International Motor Revue).  Here’s what I saw and what the caption read: 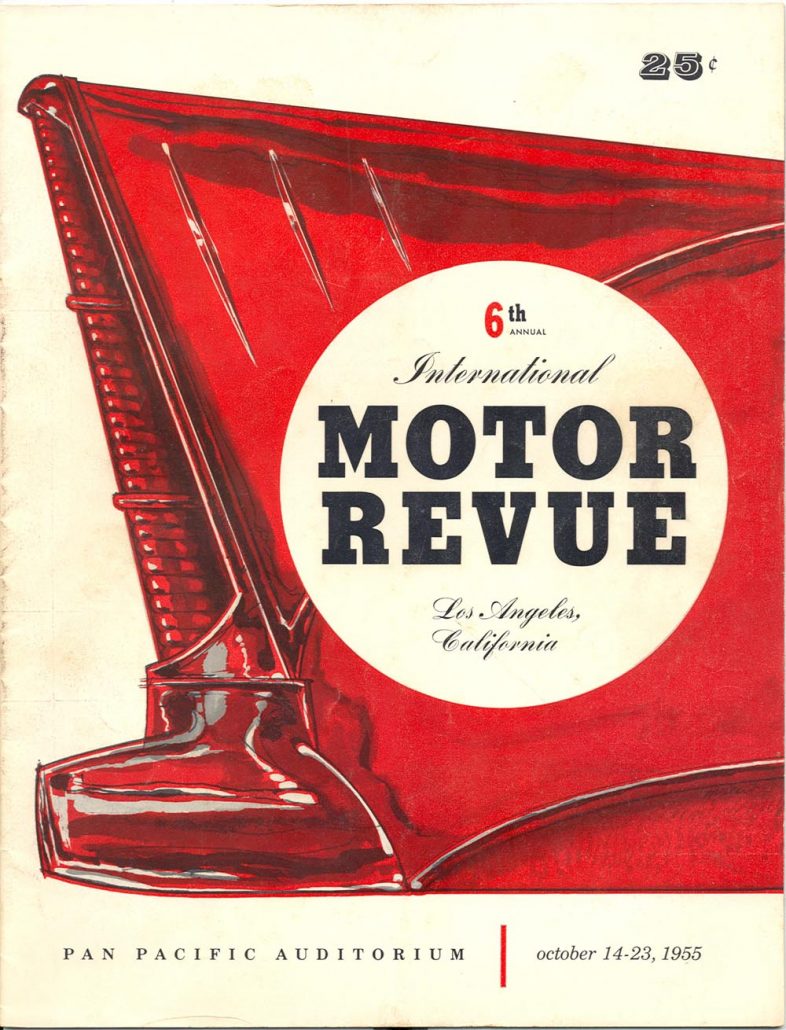 Caption in Program:  Interesting because of its different approach to styling is this fiberglass one of a kind sports car.  Owner:  Robert W. Berry, Fullerton, California. 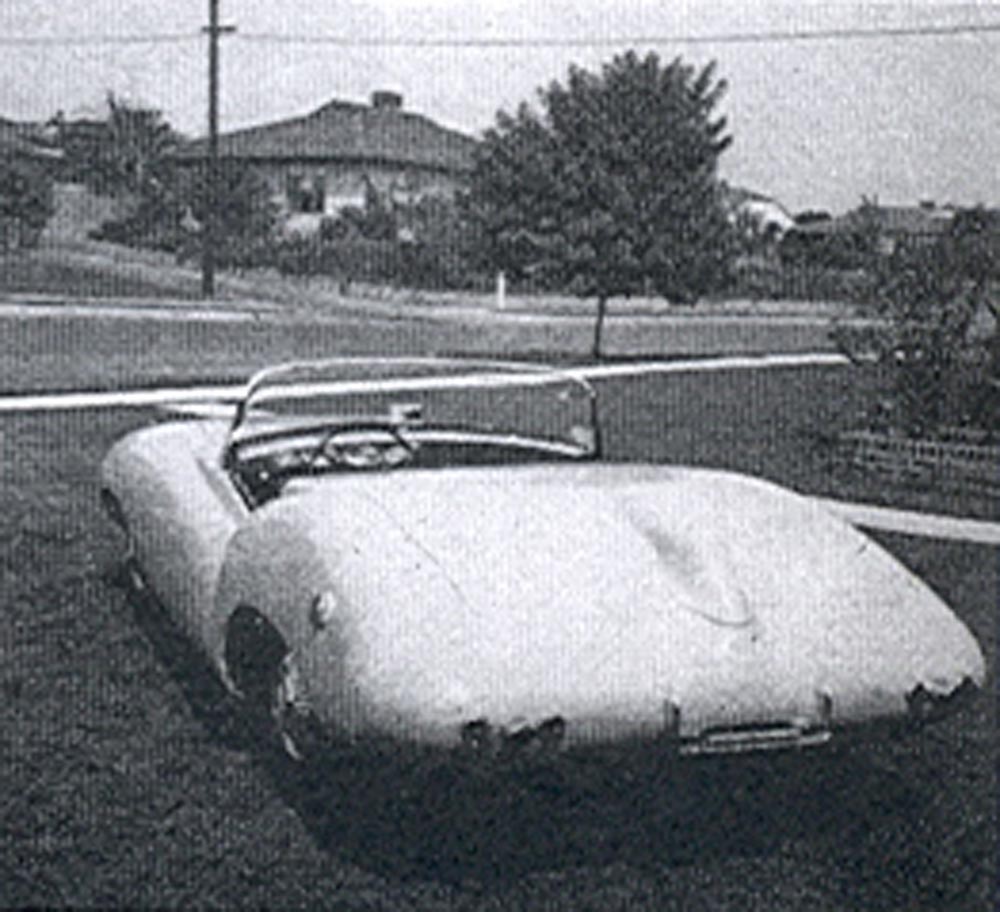 Notice the cool low profile “fin” on the rear of the car?  Pretty cool….

The car had quite distinctive styling and I always thought it had similar lines – and perhaps heritage – to a “Mysterion” we’ve featured before on our Forgotten Fiberglass:

But you know me….I always want to know more.  I looked and looked but to no avail.  Finally, one of our Forgotten Fiberglassateurs came to the rescue – Norman Hawkes from Great Britain.  Way to go Norman!  He contact me last year to start a dialog about this car and shared an article on it – our feature article today – that I had never seen before.   And that’s a hard feat to do these days gang!

Great job Norman, and hats off to you from ‘over the pond.’   This article is dedicated to you and your stellar research efforts 🙂

As you’ll see in the captions of the photos of the article, Robert and Bill Berry called their car the “Falcon.”

Let’s learn in “first-person” what they had to share about building and driving their Falcon back in 1955. 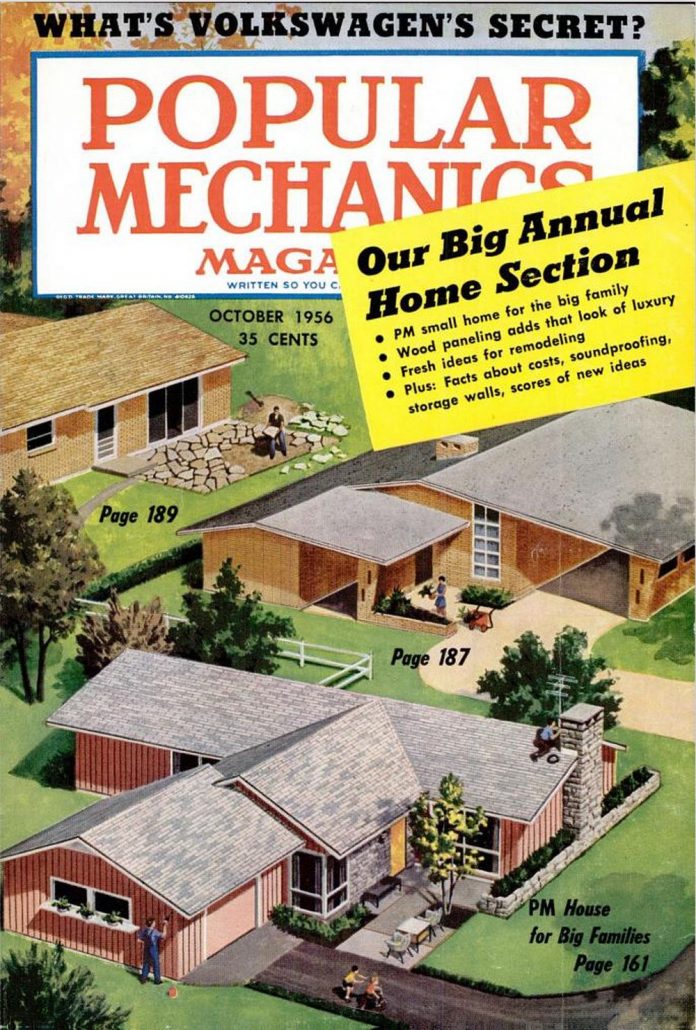 When my son and I decided to build ourselves a sports car of our own design, we didn’t know what we were in for.  It is probably just as well, because an awareness of the many, many late nights and long weekend in the garage might have discouraged us from what has been a most rewarding experience.

Bill, my 16 year old son, and I had some experience building hot rod cars, but to design and build a complete car was something new and challenging.   The car was built from the wheels up in our two car garage.  We used an old frame as raw material for the chassis.  Side rails were tailor-made by cutting and splicing them to the 100 inch wheelbase.

We boxed the rails by welding an additional channel and used tubing and boxed channel for cross members.  We used tubular axles leaf springs, airplane-type shocks and a fast steering ratio to insure the sport car feel.  Three and a half turns from lock to lock give a turn circle with a diameter of 32 feet.  Drive is Hotchkiss and rear-axle ratio is 3.9 to 1. 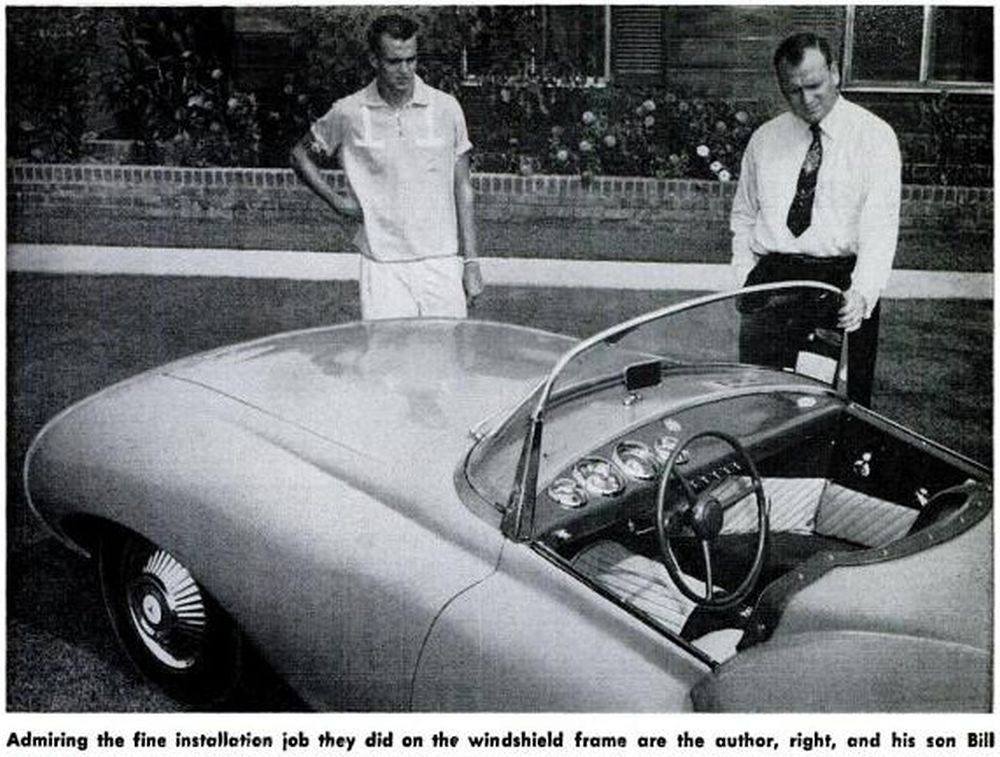 The engine is a Buick V8 of 322 cubic inches, slightly modified to produce about 250 horsepower.  Compression ratio is 9.2 to 1 and a two-inch dual exhaust system is used.  To obtain fore and aft balance, the 12 volt battery is installed at the rear of the frame.  The radiator is slanted to provide the required low hood line.  The wheels are 15 inchers.

Tires are 5.90 in front and 7.60 in rear to provide easy steering plus good traction.  The spare is a compromise of 7.10 for emergency use only.

Styling is our own and expresses a desire to be different without offending.  It has a teardrop nose and a relatively high but flat rear deck to move the low-pressure area behind the car instead of above it.  Cut-down doors give a sports car look to the car and the single tailfin adds a little flash. 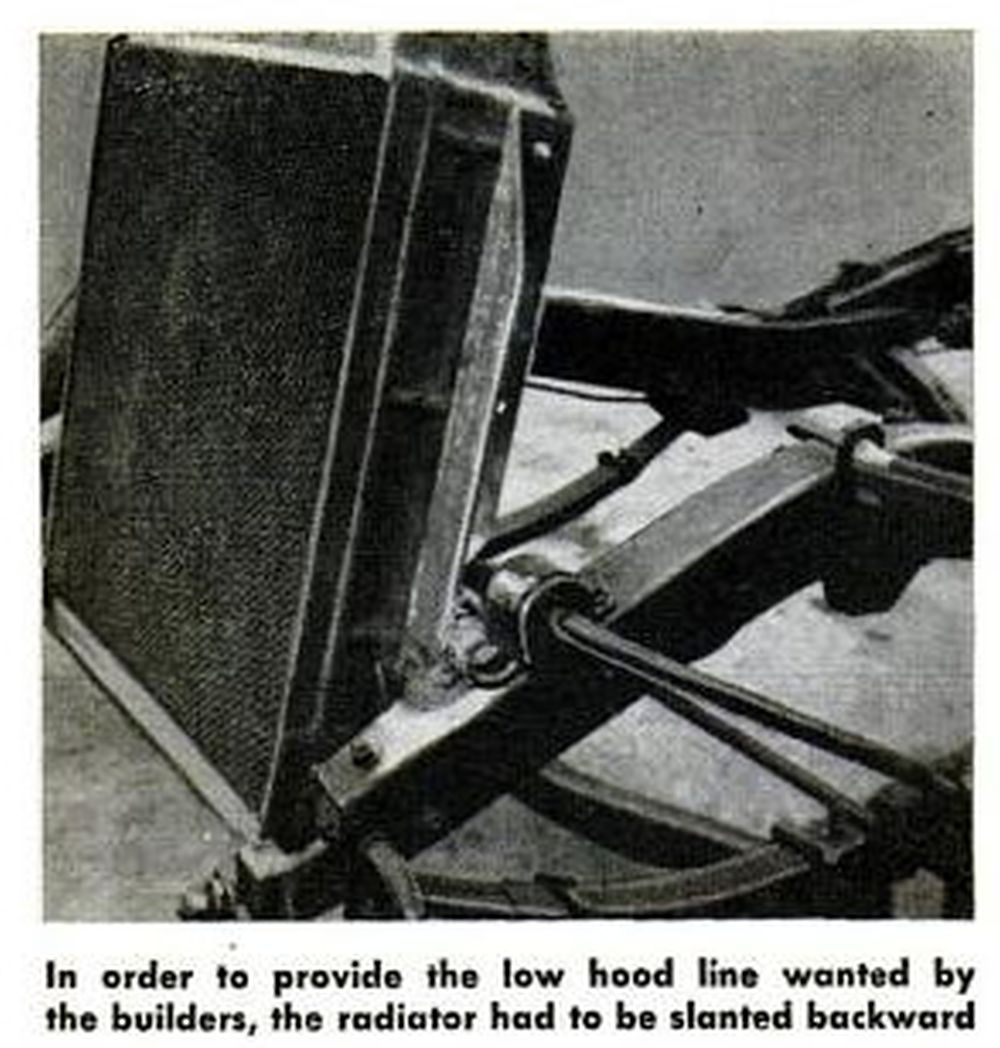 These are individual opinions which you may not agree with but, after all, the real reason for building a car yourself is to create something that you like.  You are not trying to appeal to everybody, just to yourself.

The whole product took us 18 months of spare time.  The rest of the family helped at times and, on occasions, some of our friends pitched in.  The biggest part of the project was the construction of the tooling and molds for the plastic body.  Standard methods were used.  First, we built a full-size master plaster mockup and then made glass-fiber female molds from it.

Originally, of course, we made detailed scale drawings on which we worked out the dimensions.  From this drawing, loft lines were laid out to full size on paper and wood templates made from the lofted lines.  These were assembled into a frame to form the skeleton for the master plaster mockup. 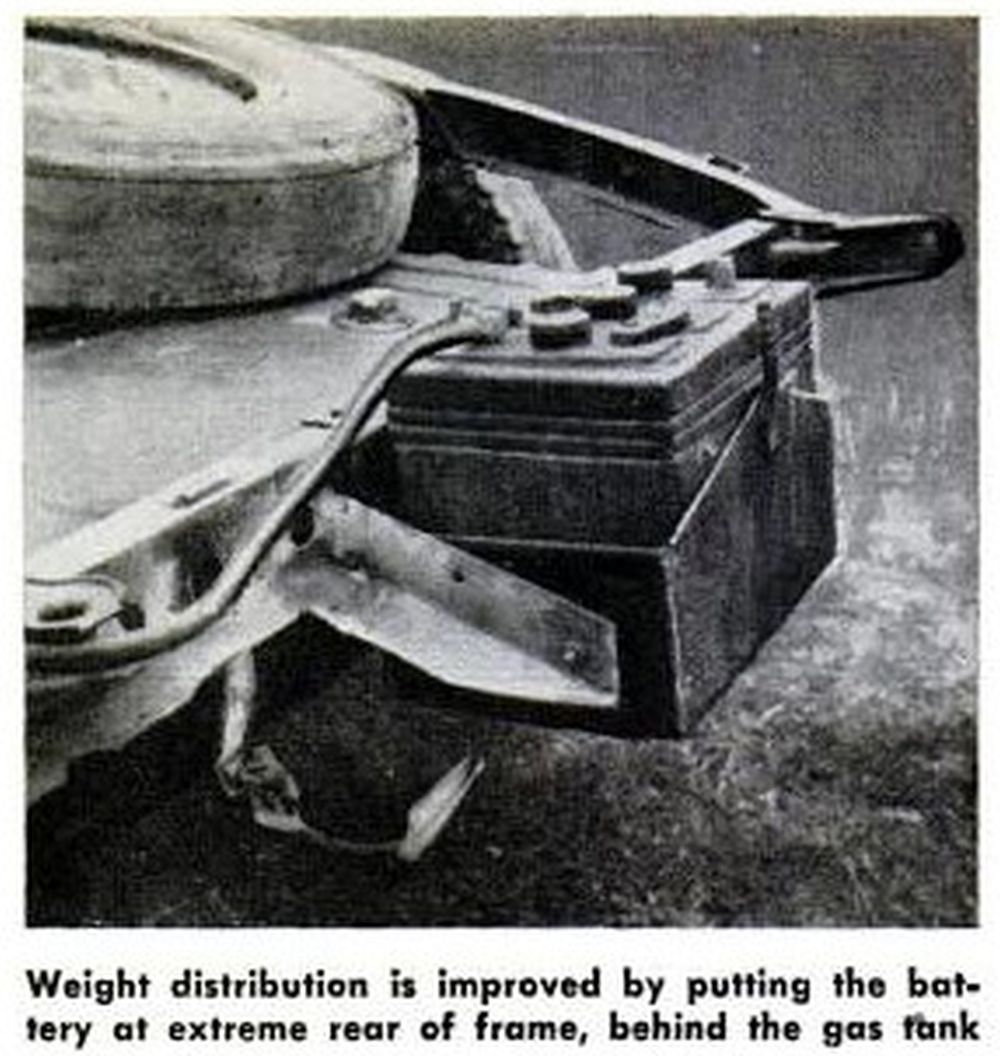 Screening was attached to the templates to support the plaster.  Commercial casting plaster was applied in two coats.  We applied it by hand, but worked it with steel scrapers.  This is the most difficult operation for a novice and the one we found the hardest to do.

The surface of the master must be perfect because it is transferred exactly to the inside of the female mold and then back to the finished part.  Successful work depends upon a well-finished master surface.  To perfect the surface we did much sanding and polishing.  Several months were spent on this operation alone.

In the next step, we molded the glass-fiber female mold over the master plaster.  Tis was made in one large layup and it required fast work by two or three men.  The entire master was covered with glass-fiber mat and cloth, impregnated with polyester resin.  All air bubbles must be worked out as you go along. 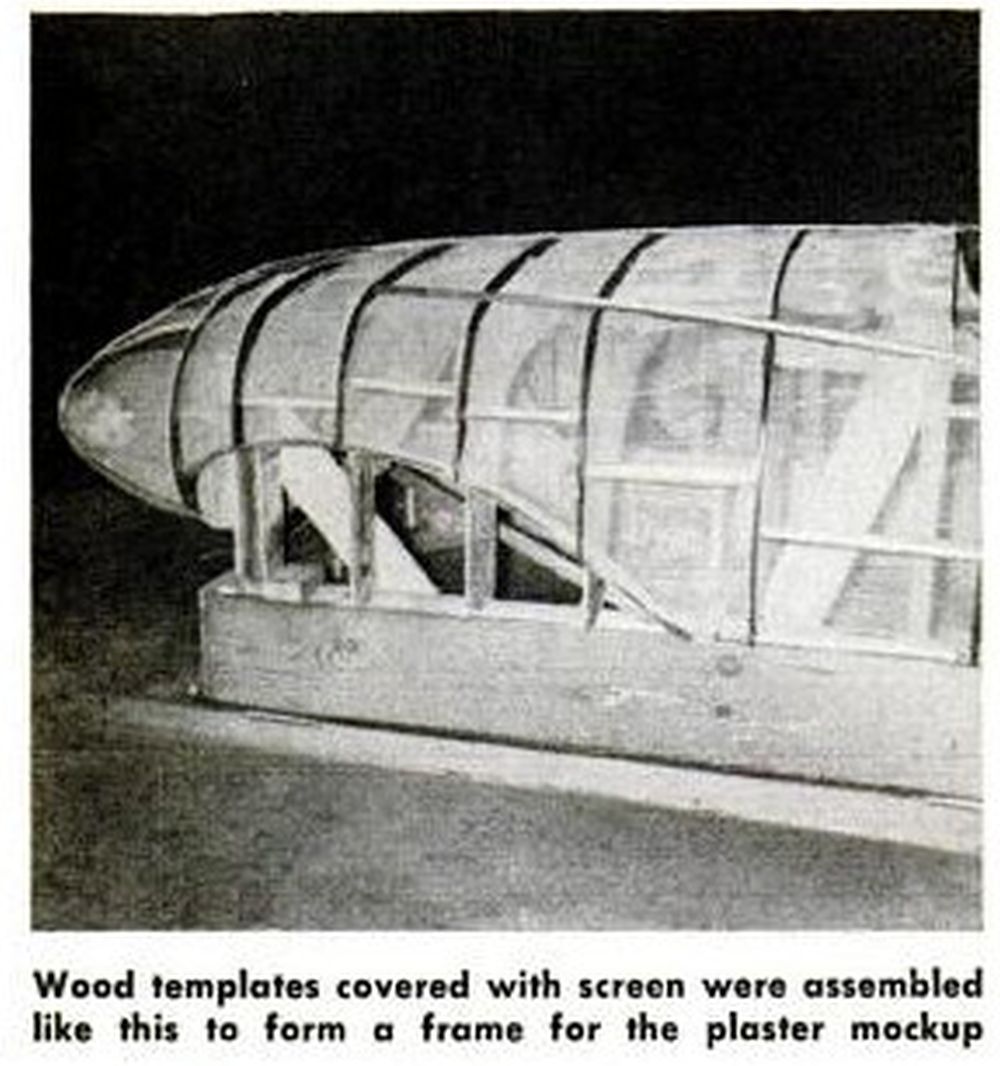 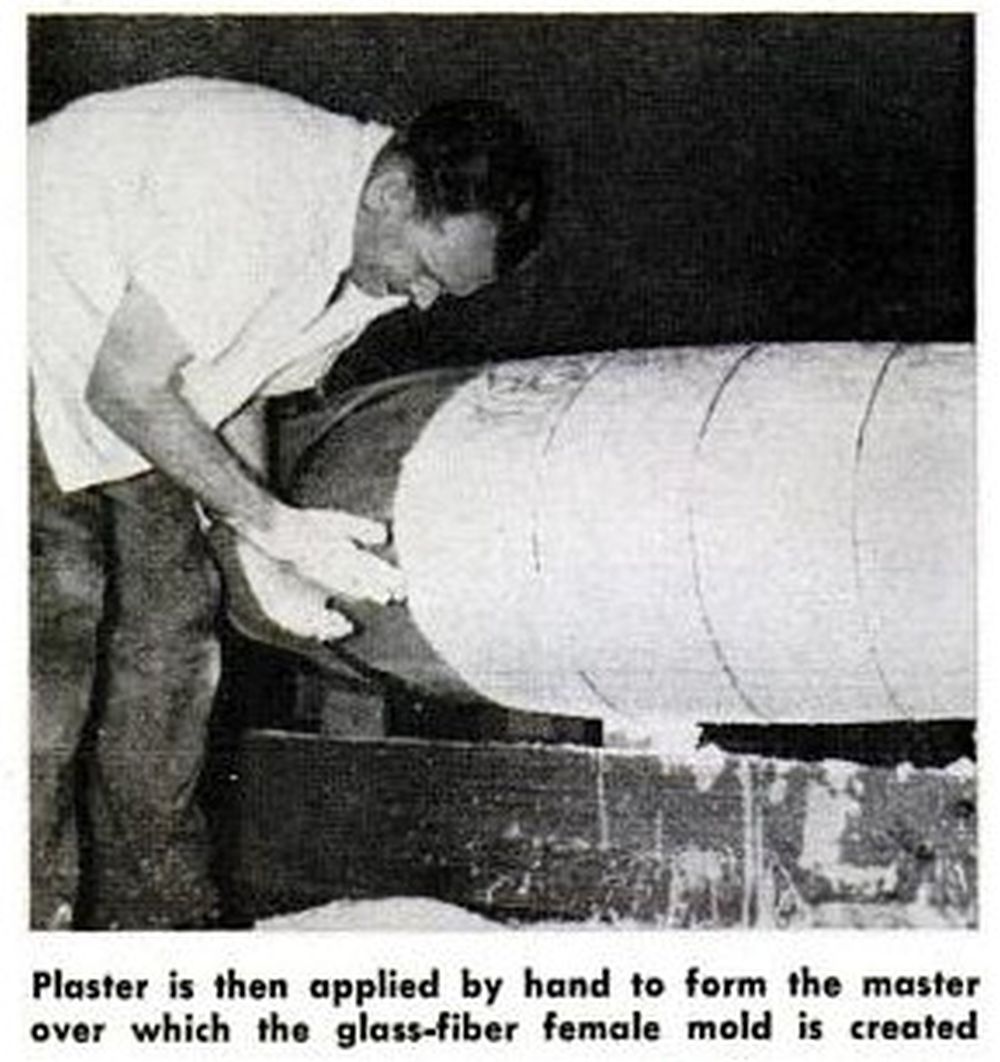 The female mold is flexible and requires support.  A wooden framework is built to the contours of the master and attached to the outside of the female mold.  With the body tooling complete, we used the hand layup cold-set method to make the plastic body panels and sections.  The parts are about 1/8 inch thick, lightweight, and very strong.  Within 24 hours, parts could be removed from the molds and the rough edges trimmed with a saw.

The body consists of nine major plastic sections.  These parts are carefully trimmed and fitted before being bonded together.  Surfacing of the body prepared it for painting.  Careful sanding and filling with body putty were necessary.

The windshield (from a 1955 Pontiac) is held in place by a steel frame which is chrome plated.  We sawed, filed, and formed it by hand.  It is fastened to the steel frame which reinforces the cockpit.  We made the instrument panel of steel sheeting and it holds the chrome-circled dials at an angle looking up at the driver.  The instruments include a tachometer.

Seats are the bucket type and the driver’s seat adjusts fore and aft.  We made the frames by cutting down a set of old two-door sedan seats.  Nothing we could buy would fit the troughs in our floor so we had to build the seats.  The only job we contracted out was the upholstery.

Dry weight of the car is 2500 pounds and this gives an excellent power-weight ratio of 10 pounds per horsepower.  Weight distribution of the car unloaded car is exactly 50-50, front and rear.  Center of gravity is low.  Acceleration is excellent because of the fine traction.

The ride is firm, but softer than on some foreign sports cars.  Cornering is flat and breakaway speed is high.  The engine is very smooth running and, unlike some sports cars, is very quiet.  Being coupled to the Dynaflow transmission, it is a pleasure to drive.

Originally, we were devoted to the old stick-shift gearbox, but after driving the torque converter in our family sedans for many miles decided the automatic transmission is here to stay.  Under the light weight of our plastic car, the Dynaflow just loafs along.

Acceleration in Drive range produces faster acceleration than any stock car we have driven.

First, we have a blow-by-blow record in first person of how long it took to build this car which was nearly two years – not bad!  Back in the day, the average time reported to build a car if you had a body is 2000 hours – 50 weeks of 40 hour weeks and 2 more weeks off for good measure – a full year.  The fact that it took nearly two years fits nicely with what we know since the had to design, build, and fabricate their body too.  These guys spent blood, sweat, and tears to make their dream a reality.   That’s what it took back then to build your own car – an amazing feat to have considered and to have accomplished.  Robert, his son Bill, and friends and family did very well building this car.

The Forgotten Fiberglass Challenge:  The article above notes that Robert’s family was quite large so it should be easy for us to find his family.  Hopefully, the family would have photos of the car being built – originals that would be neat to share.  And they might even still have the car.  What fun that would be to find this car and bring it back into the light of day or help them do it – in every way 🙂

Anyone want to help find the Berry family from Fullerton, California?  Norman Hawkes and I would be mighty proud and we’ll feature what you find here at Forgotten Fiberglass.