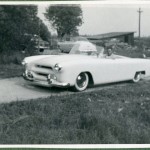 I scream, you scream, we all scream for….fiberglass mysteries.

Or at least newly discovered fiberglass sports cars and their history (I couldn’t find anything that would rhyme with “ice cream.”)

You’ll be hearing more about my good friend Rick Ruth in the coming weeks.  Back about 10 years ago, Rick came across a collection of photos and memorabilia focused on early fiberglass cars and mostly the Chicagoan sports car.  I’ll be sharing these stories over time on our website – each one a tribute to Rick Ruth and his foresight to save such rare and valuable information.  This story’s for you Rick!

Today’s story is about one of the cars he found information on – the Frank Fisher Enterprises special.

In the collection Rick Ruth had found, were three pictures and one short article on a nicely designed early fiberglass sports car.  Here’s what the newspaper article said (undated and unknown paper): 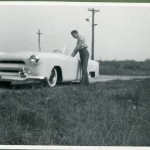 “Chicago Built Custom Fiberglass Sportster being produced by Frank Fisher Enterprises.  This car has a Ford chassis and Lincoln engine.  Seated in car is Frank Fisher; beside it is Miss Martha Gailinas.”

The three pictures Rick Ruth had found show an attractive car for its time that was more typical of fiberglass sports cars designed closer in proximity to Detroit.  Rick D’Louhy and I have noticed that the closer the design and production of a fiberglass sports car gets to Detroit, the more “Detroitish” the car looks.

That is, if a shop were located closer to Detroit than California, the design was nearly always more conventional and less sports car-ish in design.  West coast designs were more sporty in design and perhaps influenced more greatly by European design.  Midwest and east coast fiberglass sports cars had a more conventional and boxy “1950’s” design and that makes sense – they were influenced by Detroit – America’s powerhouse for everything automotive.

So who is Frank Fisher and what/where is his sports car?  Let’s see what we can find.

Without a middle initial, it’s hard to locate a person with a more common name (like Frank Fisher) using tools on the Internet.  But, researching the name of the company he owned – Frank Fisher Enterprises – is a different story.  A web search quickly turned up a relevant brochure posted by our fiberglass boat friends at “Fiberglassics” related to this car.  Click here to visit the Fiberglassics website and explore a bit more. 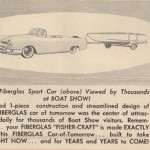 I Wonder What Boat Show The Car and Boat Appeared At? I Always Love Drawings And Sketches Used To Promote Cars Of This Era.

On their website was a brochure from “Fisher Craft Fiberglass Boats” with the slogan “Built by Fisher” and the tell tale signature “Frank Fisher Enterprises, Berwyn, Illinois.”

And on the last page of the brochure, the following information – and picture – was shown:

“Our fiberglass sports car (above) viewed by thousands at boat show!  Molded 1-piece construction and streamlined design of this fiberglass car of tomorrow was the center of attraction daily for thousands of boat show visitors.  Remember…..your fiberglass “Fisher-Craft” is made exactly like this fiberglass “Car-Of-Tomorrow”….built to take it right now….and for years and years to come!”

Sounds pretty cool to me and I’d love to see some pix of this “Car of Tomorrow” at the boat show.  I wonder which show it was at?

Keep in mind that a fiberglass boat company working on developing a car body / sports car was very much the norm back then.  Glasspar did it with their boats and G2 Sports Car.  Hollywood Plastics and the Campbell brothers did it with car bodies and boats as well.  Very common to approach a boat business in this way back then gang.

As for the woman shown in the newspaper picture with Frank and his car, Martha Gailinas, I did locate her, but unfortunately she passed away in 1998 at 84 years of age.  I could not locate any relatives of hers to learn more about what she might have known about Frank Fisher.

The Berwyn Public Library near Chicago shows a “Frank R. Fisher” in Berwyn at the time who would be 98 years old now.  However, if this is the correct person then his wife is Hildred or “Helen” V Fisher and would be 85 years old this year.   Looks like I might find a bit more information if I can push this lead a bit more. 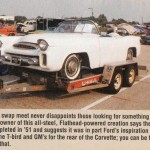 This Car Was Last Seen In 2007. Could It Be Related To The Long Lost Frank Fisher Enterprises Special?

So….you wild fiberglass researchers out there…..here’s the challenge.  The search is still on for Frank and his relatives (wife, children, family), and any additional information about his car.  With some focus, help, and luck, we should be able to find some pictures from the boat show mentioned in the Fisher Craft brochure.  Most likely it was printed in the 1953-1955 time frame – given the style of the car and the date of the materials found by Rick Ruth in his collection.

Marshall Foxworthy may have already found a clue.  Included in the gallery of photos below is a picture of a car which suspiciously looks a bit like the Frank Fisher Enterprises Sports Car.  This car was for sale at the Street Rod Nationals, Louisville Kentucky in 2007 – so it was even in the right area of the country – if it was related to the Frank Fisher car.  Maybe this was an earlier car, later car, or….unrelated car.  Time will tell

So tune up your research skills and hit those fiberglass streets gang.  One of you may unlock the key to learning more about this car and its heritage – and perhaps find a few pictures of it along the way too.  And….thanks again to Rick Ruth for loaning us pictures of the wonderful car he found (in photos). 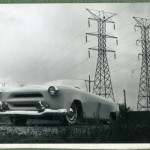 Nice Front 3/4 Picture of The Frank Fisher Enterprises Special – Most Likely Frank Fisher’s At The Wheel. 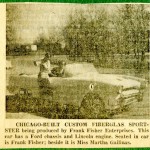 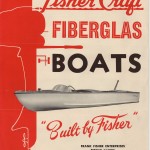 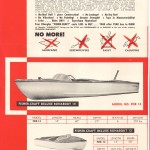 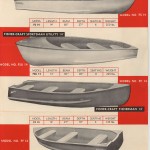 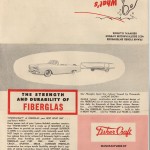 This Car Was Last Seen In 2007. Could It Be Related To The Long Lost Frank Fisher Enterprises Special? 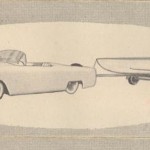 I Wonder What Boat Show The Car and Boat Appeared In? I Always Love Drawings And Sketches Used To Promote Cars of This Era. 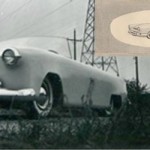