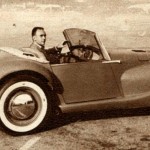 Great Rear 3/4 Shot of Bill Tritt At The Wheel of His First Glasspar Ascot. What a Beautiful Design This Was – And Innovative In Its Construction Too!

It was 1955 and Bill Tritt and Glasspar were getting ready for their next big “splash”.

Tritt fancied the classics – 1920’s and 1930’s cars.  His son Matt tells me that he liked the long hood, excellent weight distribution with the engine far behind the front axle, separate fenders, and the classic lines of the pre-war cars.  So in 1954, he set forth and started designing what would become the first neo-classic sports car of the post-war period.

Perhaps the 1952 Maverick Sportster with its gigantic 127 inch wheelbase could be considered the first postwar “neoclassic.”  I tend to view Tritt’s Ascot as making the grade here, and the reason is “size.”  Most of the postwar neoclassic were small cars – similar to the Ascot which had a wheelbase of just 94 inches.  The tremendous size of the Maverick (the body is very heavy – Rick D’Louhy and I can attest to trying to lift ours more than once.  Whew!) puts the Maverick in a class of its own.  The Maverick was a neoclassic perhaps – but one that wouldn’t be repeated in sheer size until the Excaliber neoclassic appeared in the 1960s.

Let’s take a look at the debut of the Glasspar Ascot – the first article appeared in 1955 in the February issue of Motor Trend.

“All-American is a term that has fallen into disfavor in the automotive products of recent years, largely because of Italian concepts (and general Continental styling) being evident in so many efforts.  But Bill Tritt, producer of the popular Glasspar G2 sports car body, has come up with something that’s wholly original – the “Ascot,” a classic-like body combining the attributes of a new and an old era, yet unlike anything produced in either fiberglass or metal to date. 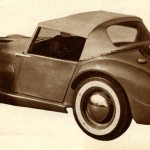 Here’s A Rear 3/4 Shot From The Driver’s Side With Top Up. Matt Tritt Tells Me That Glasspar Was Planning And May Have Built a Fiberglass Hardtop For The Ascot Too.

It was a tall order – to build a fiberglass car without the new envelope-type body, and yet one that had to have the newness that appeals to a prospect.  The car gets sparkling performance from a flathead Studebaker six; it has Studebaker A-frames with a transverse spring in front, and outrigger-mounted quarter-elliptic springs in rear; Houdaille torque-arm-type shocks are used all around.

In completed form, the 1690 pound Ascot has roll-up windows, leather (and extremely comfortable) upholstery, a neat top, “two-suiter” luggage space under the spare tire, and marine-type hardwood trim.  The production model is tentatively set up to use Ford ball-joint suspension and a four-barrel Ford industrial engine of 172 cubic inches.

In its favor saleswise are an attractive initial cost (a rumored figure placed the Ascot in a competitive bracket), its low maintenance cost (stock components throughout, bolt-on fenders and front end) and its fun-to-drive handling characteristics (wheelbase is only 94 inches, height is 48 inches with top up, tread is 54 inches, and weight distribution is an ideal 50-50).”

The Glasspar Ascot debuted at the start of 1955 and would last thru the end of the year.  In early 1956, the project was suddenly cancelled by the Glasspar Board of Directors – much to Bill Tritt’s surprise and dismay.  The “Board” had decided that Glasspar would focus on boats, and that the “car” side of the business was unprofitable and unproductive.

In interviews with Bill Tritt in 2007 and 2008, he detailed his frustration with their decision to me, but Glasspar had “gone public” and although he was a significant part of its operation, Bill could no longer steer the company in the specific direction he wanted.  More about that in future stories. 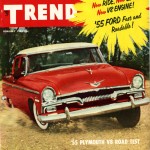 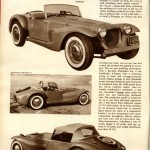 Great Rear 3/4 Shot of Bill Tritt At The Wheel of His First Glasspar Ascot. What a Beautiful Design This Was – And Innovative In Its Construction Too! 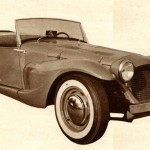 Here’s A Rear 3/4 Shot From The Driver’s Side With Top Up. Matt Tritt Tells Me That Glasspar Was Planning And May Have Built a Fiberglass Hardtop For The Ascot Too. 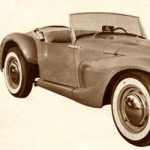