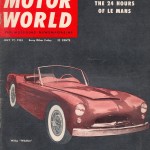 Here’s The First Publication Showing The Newly Designed Woodill Wildfire – Motor World, July 17th, 1953. The Car Was So New – and Exciting – That It Ran Only On The Cover. No Story Or Information Appeared In The Magazine On The Wildfire – It Was Probably Still Too New.

The first Woodill Wildfire debuted during the November 1952 Peterson Motorama in Los Angeles.  It was based on a Glasspar G2 body with 3-4 modifications which included an extended front hood scoop, double-hump dashboard, and tail fins to boot – that’s what differentiated the first Woodills from their Glasspar body and not much more.

By the way, much of this first car was Willys-based such as the drivetrain, front grille, and tailights.  This was to reinforce the possibility that Willys would choose the Woodill Wildfire as their first sports car – which never happened.  But that story’s for another day…

The fact that the first Wildfire was based on a Glasspar body should make sense – Bill Tritt designed it for B. R. “Woody” Woodill and the “need for speed” in getting the car done necessitated making modifications to an existing Glasspar G2 body and adding what would be distinctive Woodill styling – as quickly as possible.

Most likely, Woody was under the gun to get his car in the November 1952 Petersen Motorama where just a year earlier, fiberglass sports cars debuted to thunderous approval for the first time in automotive history.  If he could do this (which he did), no doubt significant publicity would follow (which it did).

Tritt even brought in his trusted friend Harold “Shorty” Post to design and build frames for these early Woodills (now known as Series 1 Woodill Wildfires).  Shorty Post was the perfect choice – he was producing frames for Glasspar cars too, and would continue doing so through March of 1953 when Ted Mangles and Ed Martindale from MAMECO took over and Glasspar started using their frames.

These first Woodill Wildfires (Series 1) were produced in low numbers (approximately 3 were built), and formed the basis of styling which would ultimately lead to a fully fleshed out, newly designed car, and a mid-year 1953 release of what we now know as the Series 2 “Woodill Wildfire.”  In fact, the debut photo of the newly designed Series 2 Woodill Wildfire was on the cover of the July 17th 1953 issue of Motor World.  No earlier picture or mention has been found to date (but research continues).

Let’s take a look at the article.

The Wildfire (By Jim Potter) 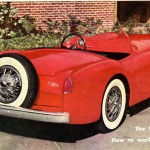 It’s Interesting That Motor Trend Decided To Feature The Back Of The Car On Their Cover. Perhaps It Was Because The Wildfire Had Just Appeared – Front Side Forward – On The Cover of Motor World.

One of the most interesting developments in the American-built sports car scene is the newly designed Fiberglass automobile shown on our cover and on these pages.  B. R. “Woody” Woodill, ex Dodge dealer turned sports car manufacturer, has plunged into a project unique in its conception in that stock Detroit parts are combined with a clean, brand-new sports car body.

The Wildfire, in limited production now for over a year, takes on a saucy continental flair in its second design (for design number one, see December ’52 Motor Trend).  The new car features a smooth contoured front air scoop, a simple grille using Willys parts, and high rear fenders.

Woodill, at a time when most people would have been satisfied with the mounting pile of orders for his original car, shut down his production line and gambled on his new body design.  Original in every respect, the new Wildfire has caught the imagination of the American taste, causing considerable excitement in automotive circles, so Woody’s gamble seems to have been worth the effort.

The new Wildfire frame, designed by Bill Tritt of the Glasspar organization, is constructed of sturdy rectangular steel tubing.  At present, the Wildfire frame is designed to take stock ’39 to ’41 Ford parts without changes as well as stock Willys running gear.  And this brings us up to how you can go about buying this new sports car. 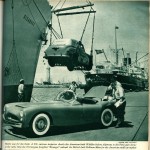 The Wildfire Was Hardly Finished Before An Early Car Was Sent To France For The Paris Auto Show in 1953. That Car Was Recently Found Through The Research Efforts Of Ted and Greg Griffin.

Three distribution methods are in effect at the present time to fill various demands.  The car may be purchased complete from a local dealer or directly from the factory; or it may be purchased in two different kits for home construction.

2: The basic kit, selling for $855, includes the factory-assembled body and all parts needed for installation on the automobile frame.  The under-assembly kit ($125) should be purchased when a Wildfire frame is used.

Is there a market for such a sports car, using stock Detroit running gear?  To be honest, we don’t know, but from the bona fide orders Woodill has stockpiled in his busy plant at Downey, we do believe that the fever has begun, and only time will give the answer to this energetic “independent.”

The date of the article in today’s story was August 1953, and Woody was still promoting his product in July 1955 when the spot on the TV show “You Asked For It” appeared.  For those of you interested, here’s the video again for your review.

In the past few years, Woodill Wildfire historians Bill Tritt and others have identified that about 100 cars and kits were sold from December 1952 thru 1956 when Woodill operations, for all intents and purposes, ceased.  That’s not a bad production run, but that’s approximately 30 cars being sold each full year (1953, 1954 and 1955).  Most likely, sales were greatest early on, but the time span of 3 years and a total run of 100 bodies/cars gives you a feel for the size of their effort.

I look forward to posting more information, brochures, pictures, and articles about Woodill Wildfire cars in the near future, but the “buck” starts here with this article gang. 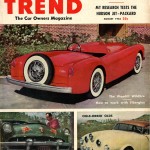 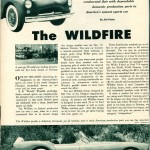 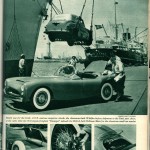 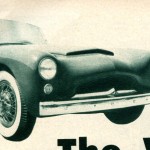 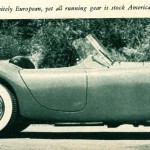 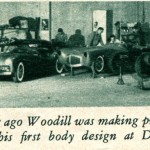 The Wildfire Was Hardly Finished Before An Early Car Was Sent To France For The Paris Auto Show in 1953. That Car Was Recently Found Through The Research Efforts Of Ted and Greg Griffin. 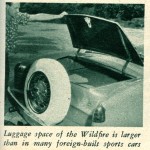 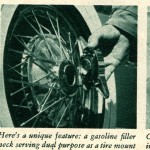 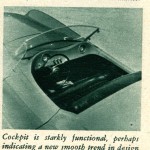 Here’s The First Publication Showing The Newly Designed Woodill Wildfire – Motor World, July 17th, 1953. The Car Was So New – and Exciting – That It Ran Only On The Cover. No Story Or Information Appeared In The Magazine On The Wildfire – It Was Probably Still Too New.

It’s Interesting That Motor Trend Decided To Feature The Back Of The Car Their Cover. Perhaps It Was Because The Wildfire Had Just Appeared – Front Side Forward – On The Cover of Motor World. 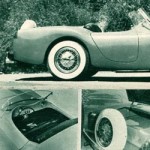