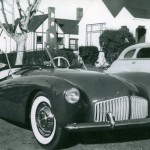 Back in late 2008, I was contacted by one of our fiberglass friends about a mystery car that was published in the October/November 2008 issue of a magazine called “Reminisce.”   It was a beautiful picture of a Glasspar G2 with a note from reader Jim Giberson….”Can Someone Help Me Identify This Car?”  Jim lives in Colorado now, but back in the 1950’s when the picture was taken, he had grown up – along with his friend Doug Nichols – in Burlingame, California (Northern California). 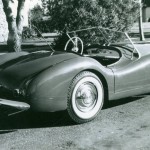 Great Rear Angle of the Nichols G2. This Car Was Certainly Completed With The Highest Degree of Finish.

Jim and I got hooked up back then, and he was kind enough to send me the pictures he had of the car – the two you see here in our story.

Jim was recovering from a hospital stay and his friend, Doug Nichols, came by and took Jim for “one heck of a ride on a new freeway – up to Roseville and back to Burlingame.  He stayed just a few hours, and had to leave.  But he promised to send some pictures of the car back to Jim – which are the pictures you see in this story today.  Jim thinks this was the summer of 1953 or 1954.   These pictures were taken in front of Doug Nichol’s house in Burlingame, California in the mid 1950’s.  Jim thinks the exterior was red and it was upholstered in black – but it was a long time ago, and he’s not perfectly certain of this point.

Since Jim had only ridden and seen the car once, not too many details were shared.  But he does remember that the car did not have a Ford Flathead V8 or a OHV V8.  Instead, it was a six cylinder – perhaps a Kaiser (I’m thinking it might have been a 6 cylinder GMC – which was popular at the time).

In the picture showing the back of the G2, the exhaust exits on the right rear of the car, most likely confirming that it is not a V8.  Most Ford Flathead V8 engines would have dual exhaust – to promote the “sportiness” of the car.  GMC engine exhaust exits on the right side (passenger) of the block.  Not sure if Chevrolet 6 cylinder or Kaiser 6 cylinder exits on right or left side of block, so the exact engine determination is still up in the air.

Jim also recalled that Doug did not build the car – he purchased it.   Maybe from a San Mateo car dealer that had one for sale at the time – Jim’s not sure of the connection there, but it’s possible.

So….we’re still in search of the true heritage of this car, but we have a great story on this part of it’s life. 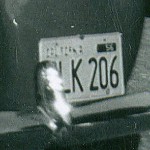 Some of the new equipment I have (along with tricks I’m learning with software) allows close up of pictures that both magnify and sharpen the detail.  Sometimes this helps – sometimes not.

When I magnified the front license plate of the “Nichols Glasspar G2” it showed a 1956 California plate.  The style of California license plate changed in 1956, so it appears the picture was taken in 1956.  I’m just not sure if someone could have bought a 1956 plate in 1955 – or even 1954.  Probably not.  Or these pictures could have been sent to Jim 1-2 years after he had seen the car.  Either is possible.  But the pictures themselves were most likely taken in 1956.

I’ve magnified the dashboard as well.  Pretty interesting dashboard and instrumentation.  Clearly not a Glasspar G2 dashboard – although it might have had one originally, and this could have been an update.  We don’t know at this point.  And…the G2 had a column shift transmission.  Most likely “Three on the Tree”.  This might help us identify the car if it retains some of these features today. 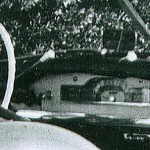 Here’s a Close-up of the Dashboard. Pictures Showing Original Dashboard Configurations Are Like Fingerprints for Vintage Fiberglass Cars. Almost No Two Dashboards Are Exactly The Same, and This Can Help Us Identify The Heritage of Glasspar G2’s Found Today.

Jim never saw the Glasspar G2 Sports Car again – but remembered it with these fine pictures he shared with us today.  Although Jim kept in touch with his friend for years – in fact they grew up together – he lost track of his Doug Nichols some time ago.  Perhaps we’ll find Doug thru this story today – either he will see it or someone will recognize his G2 from years ago, and help us reconnect childhood friends – Doug Nichols and Jim Giberson.  If you’re out there Doug, let us know.  We’re hoping to find you.

Thanks again to Jim Giberson for taking the time to share the pictures and the story.  I hope you enjoyed reading it as much as I did writing it.

Great Rear Angle of the Nichols G2. Thankfully We Can See the Dashboard. Pictures Showing The Original Dashboard Configuration Are Like Fingerprints for Vintage Fiberglass Cars. Almost No Two Dashboards Are Exactly The Same.

When I Magnified the License Plate It Clearly Showed 1956 – This Style of License Plates Was New for 1956 in California.

Here’s a Close-up of the Dashboard. Pictures Showing The Original Dashboard Configuration Are Like Fingerprints for Vintage Fiberglass Cars. Almost No Two Dashboards Are Exactly The Same. 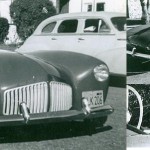