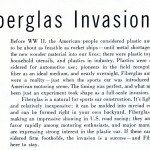 As With Each Petersen Motorama, The 1953 Motorama Showcased Fiberglass Sports Cars Too.

If only we could go back in time….I know exactly where I would go.   To the 1950’s Petersen Motoramas.

Back in 1950, Robert Petersen who started Hot Rod Magazine, Motor Trend, Car Craft, and others saw the unique opportunity to create a powerhouse event – one that would capture the growing excitement and enthusiasm of car guys across the country and that would rival General Motors “Motorama” in every way.

Petersen showcased Hot Rods, Race Cars, Dry Lakes Cars, Custom Cars, Motorcycle, Boats, and most importantly…..fiberglass sports cars too.  It’s for all these reasons that we focus on the Petersen Motorama as a historically significant event for all automobiles – and one that is surprisingly….mostly forgotten today.  We’ll see if we can change that view in the next few years.  In the meantime, let’s dive into the 1953 Petersen Motorama Program and check out the cars they were promoting. 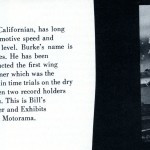 This Was The Fourth Year That Burke Managed Critical Aspects of the Motorama – He Was There From The 1st One in 1950. Quite an Achievement!

I’m going to concentrate on fiberglass sports cars that were at each of the Petersen Motoramas – today the 1953 Motorama.  If you would like to view the entire 1953 Motorama Program and other Programs too, see the link at the bottom of this story.

The 1953 program gives a nice intro to both Robert “Pete” Petersen and Bill Burke.  For those of you Atlas/Allied fans out there, Bill Burke was in the center of Hot Rod, Dry Lakes, and even magazine publishing back then.  Check out how they introduce Burke in the 1953 Motorama Program:

Bill Burke, a native Californian, has long been identified with the automotive speed and power field on an amateur level.  Burke’s name is pre-eminent in hot rod circles.  He has been an innovator, having constructed the first wing tank bodied hot rod streamliner which was the first machine to hit 160 mph in time trials on the dry lakes.  He has built and driven two record holders for Bonneville Nationals.  This is Bill’s fourth year as Floor Manager and Exhibits Director of the International Motorama.

Wow!  This means that Bill Burke started working in an official capacity beginning in the 1950 Petersen Motorama – the first one ever held.  Bill Burke is truly one of the original Hot Rod pioneers in every way. 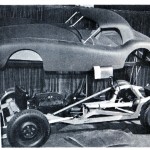 Checkout Great Display By Glasspar of “How to Build a Sports Car” at the 1953 Petersen Motorama.

It’s always interesting to see who was officially at each of the Motoramas.  More “Exhibitors” were most likely there.  For example, Victress isn’t listed in the “Motorama Exhibitors”.  However, we know that Victress was not just there, but Doc Boyce-Smith (Founder) and Bill Quirk (Production Manager) laid up a car body over several days – and displayed a finished Victress S1A on the floor – too.  Here are the key exhibitors in terms of “fiberglass” and some thoughts:

Here’s a bit about each of the fiberglass cars shown in the program.

I’ve included a picture from an ad for Burke’s car – that shows his car at the Motorama – most likely from November 1953.  Checkout the picture and the ad copy – below (and in our story).  In the meantime, here’s what is shown in the 1953 Motorama Program about Burke’s car:

Built along the lines of the finest European sports cars, Bill Burke’s Fiberglass record-holder is the only closed coupe of its kind.  Powered by an Ardun-Mercury, built by C and T Automotive, Burke’s “one-of-a-kind” features Mercedes-like doors cut high into the roof. 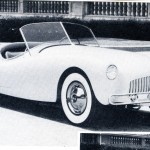 Regal Shot of Karl Hubenthal’s Glasspar G2. If the G2 is Still Around and Has These Bumpers – We Might Be Able to Identify It.

Cartoonist Karl Hubenthal had his own ideas of what a Fiberglass sports car should be, and starting with the popular Glasspar body, proceeded to customize it to his own tastes.  The body was unchanged, but trim, including attractive, hand-formed chromed-tubing bumpers added personality.

For those of you interested in learning more about Karl Hubenthal, here’s a website featuring Karl and his work:

Rodney Packwood is currently contacting the Hubenthal family to determine if they have more pictures of the G2 and can provide any detail or memories from the family.  It certainly would have been memorable having such a nice sports car – probably one of the first American Sports Cars in Southern California at the time.  I’m keeping my fingers crossed that Rodney is successful in locating additional information about this car from the Hubenthal family. 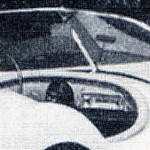 Close-Up of Hubenthal’s Glasspar G2 Dashboard. Remember Gang…Dashboards Are Like Fingerprints When Tracing Down the History of Fiberglass Sports Cars We Find Today.

Here’s what is written about the Wildfire in the 1953 Motorama Program:

The Vibrin plastic-bodied Woodill “Wildfire” designed for late model Willys or ’39-’48 Ford chassis, is considered by many to be one of the most beautiful “home product” sports cars.  A replica of this car can be seen in Danny Kaye’s latest film, “Knock on Wood.”

I hope you’ve enjoyed the short view of the fiberglass cars at this event.  The Petersen Motorama is one of my favorite touchstones and really captures the moment of excitement for building and appreciating these cars back in the day.  In the future, I’ll be writing about each of these Motoramas – held from 1950 thru 1955 so stay tuned.  You’ll be surprised what I’ve found to share.

And for any of you out there who may have pictures from these events (1950-1955), I’d love to see them.  Please contact me and let me know – we’ll share them with all, and perhaps use them in our upcoming book.  Rick D’Louhy and I would be honored to do so. 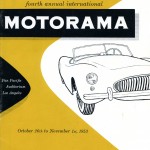 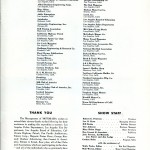 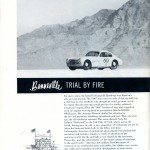 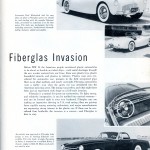 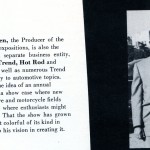 This Was The Fourth Year That Burke Managed Critical Aspects of the Motorama – He Was There From The 1st One in 1950. Quite an Achievement!

As With Each Petersen Motorama, The 1953 Motorama Showcased Fiberglass Sports Cars Too. 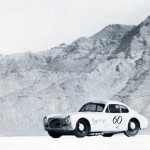 Regal Shot of Karl Hubenthal’s Glasspar G2. If the G2 is Still Around and Has These Bumpers – We Might Be Able to Identify It. 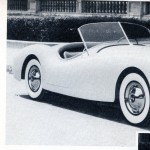 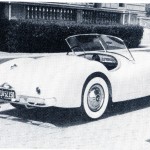 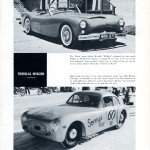 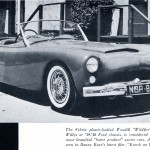 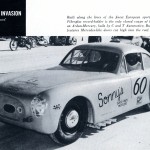 Close-Up of Hubenthal’s Glasspar G2 Dashboard. Remember Gang…Dashboards Are Like Fingerprints When Tracing Down the History of Fiberglass Sports Cars We Find Today. 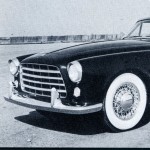 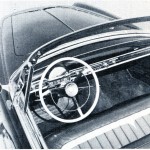 Checkout Great Display By Glasspar of “How to Build a Sports Car” at the 1953 Petersen Motorama. 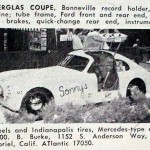 This Ad Appeared in January 1954 Motor Trend – Immediately After the 1953 November Petersen Motorama. Most Likely This Picture was Taken During the 1953 Motorama 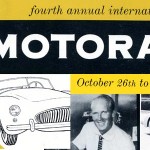