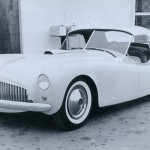 Gorgeous Front 3/4 Shot of the Swan Glasspar G2. This Was Such A Nicely Done Car – I’ll Have To Check the Archives And See if More Articles Feature it.

The best solutions come from teamwork.  That’s how we found the history of this fantastic Glasspar G2.

Jean Poirier started the Glasspar G2 club in the early 1990’s.  He created the first newsletter for Glasspar owners and later combined his efforts with Bill Hoover – an original G2 builder/owner.  These two individuals did a great job securing a foothold for the GlassparG2 in automotive history, and we all owe a debt to each of these individuals for their hard work and determination.  And in the past few years, both Jean Poirier and Pat Hoover (Bill’s son) have helped me get up to speed on Glasspar G2 history.  It’s from the efforts of these two individuals that our story begins.

Part of what Jean Poirier sent to me from his historical research were two nice copies of a beautifully built GlassparG2.  No other information except the address of the building was shown in the picture, but the car showed a hardtop and a hood scoop so I thought….well maybe this showcased the first use of both options, so they took pictures.  I wasn’t sure though…. 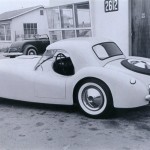 Rear 3/4 Shot Shows This G2 Had All The Options – Hardtop, Rear Mounted Spare – Even the Dashboard at an Extra $18 a Pop!

Next, I visited Bill and Greg Tritt in West Virginia, and they had the same two pictures – not in as good of shape, though.  Hmmmm… Jean didn’t get his pictures from the Tritt family, so I now had two sets of identical pictures from two different collections – and no information on the car.

Last year I was in California, visiting with Erich Schultz and going thru some of his vintage magazine collection.  He had found articles and ads of all different fiberglass cars, and we spent hours reviewing what he had located.  One of these was an ad for a Glasspar G2 for sale – nicely done with a hardtop and built by Clay Smith’s garage – a well-known race car/engine builder from the 1950’s.  The ad was from Road and Track, July 1954.  I didn’t link it to any car I knew…. 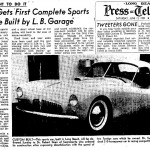 Putting It All Together:

I have been working with a number of libraries (Detroit Public Library, Philadelphia Free Library), and automotive research centers (Benson Ford Research Center, Petersen Automotive Museum, Watkins Glen Racing Library, Kettering Research Archives), and have been able to cull information from as many different sources on these cars as possible.  I feel like sometimes I’m running around a room gathering water vapor and trying to get enough of it to make a glass to drink.  Sometimes I’m lucky.  In this case – definitely.

I came across an article not in any of our “fiberglass friends” archives.  It was from the “Long Beach Press Telegram”, and was published on Saturday June 13th, 1953.  This would have been the heyday of Glasspar G2 automobiles – Bill Tritt’s Glasspar “Works” racecar was still on the track and being piloted by either Warren Gerdes or Bill Pollack – both excellent drivers.

The article tied everything together.  It showed exactly the same picture in the newspaper that both Tritt and Poirier had in their collections, and it matched the car advertised about a year later in the July 1954 issue of Road and Track.  Voila!  We had a history to go with the pictures.  And what a history this will be for the lucky owner of the car, if we can find him or her. 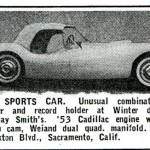 Here’s the Ad From Road and Track, July 1954. It’s Hard For Me to Believe That Someone Could Sell Their “Baby” So Quickly. Of Course My Comparison is my Convertible Shark – I’ve Had Since 1981. The Restoration is Going Nicely On it – Thanks For Asking…*wink*

The car is Cadillac powered – engine and transmission – and built on a Mameco 2×3 frame.   It had leather upholstery, white sidewall tires, and a tinted windshield too.  I’ve included copies of the pictures, the Road and Track ad, and the newspaper article below, but for ease of reading, let me repeat the article and the full text here.

THIS ONE OUGHT TO DO IT:
DENTIST GETS FIRST COMPLETE SPORTS CAR TO BE BUILT BY L.B. (LONG BEACH, CALIFORNIA) GARAGE

Because two foreign sports cars which he owned previously didn’t go fast enough to suit Dr. Robert Swan, there will be driven from the Smith & Jones Garage at 2612 E. Spring St. Sunday a nameless, polar green powerhouse which the designers and builders feel will give the young Sacramento dentist all the speed he wants – and then some.

For two and a half months, Machinist Bruce Thomas of the enterprise owned by Clay Smith and Danny Jones has been at work on this custom-built sports car and this week end it is at last ready for delivery.

Powered by a 210 horsepower 1953 Cadillac engine, Thomas says it is capable of speeds well in excess of 100 miles per hour.  Dr. Swan will put it to the test in sports car racing, and if the sleek monster performs at the standards set for it this may presage an entire new field of activity for the Smith & Jones stable, already widely known for fathering standard racing cars and speed boats. 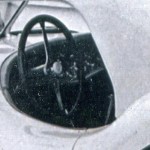 You Can Barely Make Out the Outlines of a Glasspar G2 Optional Dashboard – $18 With Purchase of Glasspar G2 Body and Frame.

This is the first complete sports car built by the firm.

The body for Dr. Swan’s powerhouse was designed and made by Bill Tritt, owner of the Glasspar Company in Costa Mesa, and all remaining work was performed here.  For the automotive minded, these technical details will be of interest:

The car is equipped with a three-speed Cadillac transmission, special racing clutch and four-throat carburetor.  The frame is made of two-by-three inch rectangular steel tubing, and a short wheel base of 110 inches will lend to the ease of maneuverability. Ford front and rear axles have been used, and the rear end gear ratio is 3.54 to 1.  The steering ratio is only two and one-half turns, lock to lock.

Complete with leather upholstery, white sidewall tires, and tinted windshield, the custom-built product will be seen by its owner for the first time Sunday.  Though Dr. Swan’s exact racing plans have not been announced, the car ultimately is destined to be viewed by thousands, while on Spring Street.  They’re ready to start on another any time the right customer comes into view.

Note:  Corrections to the article include an accurate wheelbase of approximately 100 inches – they were off by nearly a foot.

So it was with great surprise that I read the advertisement that Erich Schultz found for Dr. Swan’s Glasspar G2.  It appeared 13 months later in Road and Track and reads as follows:

Wow!  So this baby went to a Concours event – probably Pebble Beach since it was so early, and Sacramento is just 2-3 hours from Pebble Beach.  And…there’s a record time at a drag race to find.  Two more items to research on this car – I guess the research never stops.  And we still have to find the car too!

Another nice confirmation was that the address appeared in the newspaper article – matching the address shown in the picture of the GlassparG2 held by both Tritt and Poirier.  I love putting mysteries to rest.  By the way…an assembled GlassparG2 appears to have cost about $3000 in 1952-1954 for what I’ve read across both articles and ads from back in the day.  I bet this Cadillac powered Clay Smith built G2 was quite a bit more than the typically built G2 from back then – that I’m sure.

I hope you enjoyed the story and thanks to each of the folks involved who made this possible:  Bill, Greg, and Matt Tritt, Jean Poirier, and Erich Schultz.  Without their combined effort, we would not have been able to stitch the story about this G2 together.

Now….if we can just find the car.  Rodney Packwood (our Glasspar G2 Historian)….are you up for another research “adventure”???  Call me and let’s start tomorrow!

Let’s wish Rodney some luck on finding the car and..

Gorgeous Front 3/4 Shot of the Swan Glasspar G2. This Was Such A Nicely Done Car – I’ll Have To Check the Archives And See if More Articles Feature it.

Rear 3/4 Shot Shows This G2 Had All The Options – Hardtop, Rear Mounted Spare – Even the Dashboard at an Extra $18 a Pop! 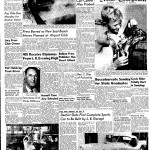 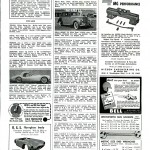 Here’s the Ad From Road and Track, July 1954. It’s Hard For Me to Believe That Someone Could Sell Their “Baby” So Quickly. Of Course My Comparison is my Convertible Shark – I’ve Had Since 1981. The Restoration is Going Nicely On it – Thanks For Asking…*wink*

You Can Barely Make Out the Outlines of a Glasspar G2 Optional Dashboard – $18 With Purchase of Glasspar G2 Body and Frame. 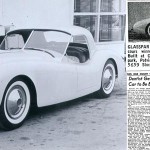