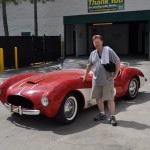 Here’s My Brother Jon With The Victress S1 – Just After We Retrieved It From The Garage.

I always remember a quote that helps me measure the strength of friendships I have.  It goes like this:

Fiberglass bodies I mean – what did you think?

For those of you who forgot…..we began our “moving day” about a week before.  Click on this link to catch up to where we are today.  Day 2 of our “moving” went well – and I pressed my brother Jon and good friend Ben back into action.

Today would only take about 5 hours.  Of course that’s in June in the heat of Florida summer.  I swear that one or two more of these darn “moving days” and Guy Dirkin (my coach and friend for getting in shape and losing weight) will start worrying about too much weight loss for me.  I’ll just be a stick figure of a guy – getting my nourishment from the air – like a supermodel. 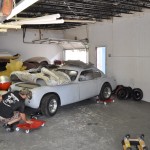 Ben Gets The Allied Swallow Up On Skates – These Are Great “Skates” But Much More Expensive Than The Ones Our Friend Scott Miller Found At Harbor Freight.

Just remember….if you love hot weather, no breeze, and near 100% humidity – Florida is the place to be in June – and moving fiberglass bodies and cars that don’t run, of course, is a great activity to plan for that time of year.  I’ve never been the sharpest tool in the shed, so to say.

Moving Cars And Bodies At “The Fiber-Glass Menagerie”

So off to our garage – affectionately called “the Fiber-Glass Menagerie.”  The first car emerges – our Victress S1A on a Henry J chassis.  This wasn’t too bad, because we had created some extra moving space the day before when we took the first Victress S1A out of the garage.   I haven’t started this Victress in years, so today won’t be the day.  Instead, like everything else, we get to push.  And push.  And prod.  And pull.

Just so I don’t forget….any and all of you are welcome to join in on moving day any time you come to Florida.  Heck…if two of you show up at once we’ll probably schedule an impromptu “moving day” in honor of your arrival.  We’ll put you to work, take lots of photos and you’ll earn a free trip to Skyline Chili – the best darn place to eat south of Cincinnati.  Thank god they have one down here for the occasional trek for sustenance.

Back to the cars.  Next we decided to attack the Atlas Swallow.  This car had originally come from Washington state, and thankfully is small – it has a 94 inch wheelbase.  But Ben had an idea.  He pointed out that the car was small enough, maybe we could tuck it into the front corner and avoid moving it outside – and then back in. 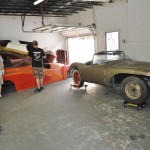 Here We Had Just Moved The Ray Palicki Bangert Out Of The Way. Jon And Ben Are Eyeing The Next Three Bodies To Move.

Ben embodies the concept of “working smarter –  not harder.”  I’m lucky to have him as part of our team.  So….we loaded the car on the “skates” we had bought at Harbor Freight and pushed the car across the garage as quick as could be.  Actually, it was so easy to move, we could have played shuffleboard with it – and Florida would have been the perfect place to try.  Next stop – the Ray Palicki Bangert Manta Ray.

Ben suggested the same with this car – put it on skates and keep it in the garage.  God I’m lucky to have Ben.  We did that and we tried out new skates under the front wheels – $7.99 furniture carts on sale at Harbor Freight.  What a deal!  They’re cheap and they hold 1000 pounds each.  Heck, a fiberglass sports car from the 1950’s weighs about 2200 lbs wet – 4 skates from Harbor Freight are cheap and hold 4000 pounds.  Sign me up – we have a new plan for the other cars from here on in.   Cheap “skates” from Harbor Freight.

Se we pushed the Bangert out of the way and finally revealed what we wanted – the Bohada Special body and the pristine Maverick Sportster body we had acquired disassembled from Wisconsin about 2 years ago.  Since that fateful day Rick and I hauled the Maverick (a car Rick and I affectionately call “The Big Orange Moose”) back from Wisconsin, we’ve assembled the 1953 Cadillac chassis and are now ready to fit the Maverick body to the Cadillac chassis.  If you ever wondered…. we’re never bored here at Forgotten Fiberglass Central.   Lots to do in every direction you look.

So we got ready.  We pushed the rear end of the Grantham Stardust against the wall and cleared a path for us to streamline the Maverick body out of the garage.  Ben, again, suggested we use skates to move the body and we did just that with great success. 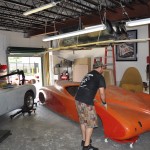 Ben’s Got The Maverick On Skates – It Glides Smoothly By The Allied Falcon And Underneath The Front End Of The Grantham Stardust.

As we pulled the Maverick out of its slot, we swung the Bangert into the spot (it’s so easy pushing the cars on skates….I don’t know why I didn’t think of this earlier).  So, we got the Maverick body out – along with the Bohada body.  Next, we traveled home to get the car trailer – and the other Bangert Manta Ray that was loaded up on it.

We returned to the “Fiber-Glass Menagerie” with car in tow.  Ben and I then unloaded the Elwood Caufmann Bangert Manta Ray and moved it into the garage.  It was the first time that two Bangert Manta Rays would ever be together – as far as Rick and I can tell – since they were built at Noel Bangert’s facilities.  We observed a few minutes of silence to reflect on the significance of the moment and moved on.

Next, we loaded the Bohada body up to take it home to meet and greet the other lost fiberglass cars at my house – at least temporarily.  I’m sure it was happy to meet new friends.  My brother Jon stood watch over the cars as Ben and I traveled back to drop off the Bohada.

We “beat feet” and got back to the garage, this time with the Chicagoan in tow.  Ben, Jon, and I then proceeded to unload the Chicagoan and pack it, too, in the garage.  On “skates,” of course.  Then, with Jon’s help, we loaded the Maverick body on the trailer, and moved the Victress back into the garage.  Successfully, we returned home – the 3 of us – triumphant that the move was almost done for the day. 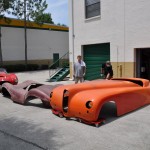 A Quiet Moment Of Solitude – And We’re About Half-Way Completed With Day 2 Of Our Move.

Dear god (I often think to myself) what have I gotten myself into???

Two “moving days” down and just one more to go – and Day 3 would turn out to be the easiest of all – and perhaps the most interesting to you for it would take us to the legendary “Lost Treasure of Fiberglass Farms.”  More about that story in the near future.

I believe you can see why I chose the aptly descriptive title “Forgotten Fiberglass Saves Marriages Across The World.”  After I published the “Moving Day Part 1” story, I had a few guys call and tell me they already feel they’re out of the doghouse – and that’s after showing just “day 1” of the move to their wives.   “For the betterment of mankind”….I suppose…..I move on. 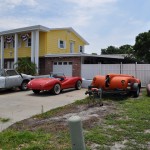 Day 2 Ends: My Neighbors Are Relieved. Now All I Have In Front Of The House Is The Cheetah Transporter, The Victress S1A, Maverick, Car Trailer, Bohada Special, And Byers SR100. It’s Great To Clean Up The Front Yard! (*wink*)

Here’s My Brother Jon With The Victress S1 – Just After We Retrieved It From The Garage.

Ben Gets The Allied Swallow Up On Skates – These Are Great “Skates” But Much More Expensive Than The Ones Our Friend Scott Miller Found At Harbor Freight. 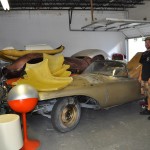 Here We Had Just Moved The Ray Palicki Bangert Out Of The Way. Jon And Ben Are Eyeing The Next Three Bodies To Move. 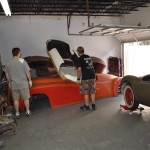 Ben’s Got The Maverick On Skates – It Glides Smoothly By The Allied Falcon And Underneath The Front End Of The Grantham Stardust.

A Quiet Moment Of Solitude – And We’re About Half-Way Completed With Day 2 Of Our Move. 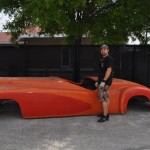 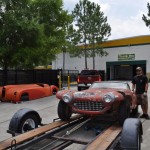 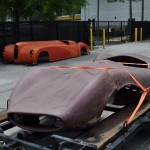 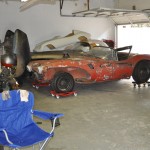 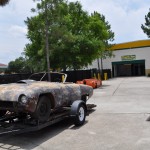 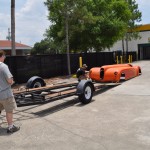 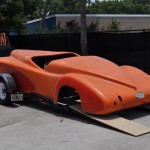 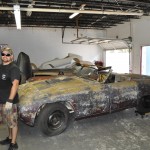 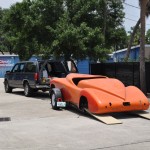 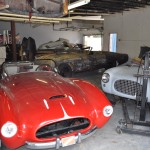 Day 2 Ends: My Neighbors Are Relieved. Now All I Have In Front Of The House Is The Cheetah Transporter, The Victress S1A, Maverick, Car Trailer, Bohada Special, And Byers SR100. It’s Great To Clean Up The Front Yard! (*wink*) 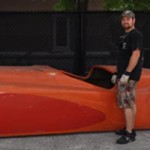