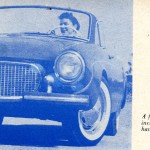 Howard “Dutch” Darrin was a designer bar none.  He’s remembered for styles he penned and cars he designed from the 1930’s thru our favorite age of cars – the 1950’s.  But what was the last car he designed that was built?  I did a bit of checking on Darrin and learned he was born in 1897 and passed away in 1982 – not that long ago.  So when did he put pencil to paper last in terms of a car?

Best I can tell was the 1957 Darrin designed DKW Flintridge – a car which met with much promise.  Dutch was a man who was innovative in terms of styling – and in terms of his choice of materials.  Back in 1946 he designed and built the Darrin roadster – one of the first fiberglass cars ever built.  And in 1952, he built the “Darrin Competition Sports Car” that ultimately became the “Kaiser Darrin Sports Car” in 1953 and 1954.

So what did he build next?  And what did he build last?  The DKW Flintridge, of course.  Flintridge was (and is) an upscale community just north of Los Angeles.  Specifically, it’s north and west of Pasadena, California.  Choosing this name was meant to evoke an upscale image for the sportscar.  And with a name like “Darrin” associated with the car, the sky was the limit.

Oh….by the way….guess who built the bodies?  Woodill Fiber Glass Body Corporation.  Sound familiar?   By 1957, Woody Woodill was not selling many (or any) of his Wildfires.  The DKW Flintridge was introduced to an admiring public in 1957.  Let’s take a look at what Road & Track had to say about its debut. 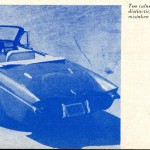 Another company – this time an American corporation – has initiated production of a custom line of cars based on the DKW.  The line at Flintridge Motors Manufacturing Corporation of California (1220 Glendon Avenue, Los Angeles 24, California) is now in production after nearly $75,000 was spent to develop the prototypes.

The four-passenger sports car is produced by cutting the roof and removing the fenders from a standard DKW coupe.  Over the remaining sheet metal is placed a reinforced fiberglass shell.  Flintridge Motors was organized for the production of cars and is licensed by the State of California as an automobile manufacturer.  The German DKW factory guarantees the Flintridge products in the same manner as it guarantees all DKW cars.

For the present, only franchised DKW dealers will sell the Flintridge.  It may also be offered at a later date to independent dealers.  Retailing at $3195 F.O.B. Los Angeles (a comparable DKW hardtop coupe is about $2275), the car will be shipped directly to dealers from the local factory.  Floor stocking is expected to begin with two months.  The sports car s a full five seater almost as long as a Thunderbird, but 350 pounds lighter than the DKW hardtop from which it is produced. 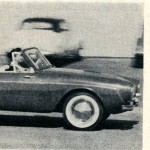 Actual manufacturing is handled by the Woodill Fiber Glass Body Corporation of Santa Ana, California.  DKW coupes are delivered directly from the Port of Entry at San Pedro to the Woodill factory.  There, all interior upholstery is removed, and the top, doors, fenders, and instruments taken from the car.

The cowl section is moved backward 6 inches and lowered 4, while a new metal frame member is installed to retain the stiffness of the original assembly.  Then, fiberglass shells are attached to the car, creating an envelope body.  The original DKW doors are altered slightly, then covered with fiberglass, so that the completed car has roll-up windows and all the conveniences of a hardtop coupe.

New interior trim is intended to go with the exterior finishes.  These will be iridescent colors, known by jewel terms such as Sapphire Blue, Ruby Red, and, alas, Forever Amber.  A removable fiberglass hard top weighs less than 40 pounds.  Production started July 15th and is expected to reach 200 units monthly by October 1st (1957).

I did a bit more digging into the history of the car and Dutch Darrin and came up with the following details.  Historian Jim Sitz remembers photographing the car in 1955 for John Bond of Road & Track.  We’re trying to put the exact timeline from concept to prototype to production for this car, so its origins may be a bit earlier than the magazine article suggests.

I also had a chance to speak with historian and car designer Raffi Minasian about his memory and knowledge of Dutch Darrin.  He’s aware of designs that Darrin did for Rolls-Royce and others thru the 1960’s and 1970’s – even a few clay smaller scale cars too.  So, Darrin’s work with automobiles didn’t stop with the DKW Flintridge – but perhaps it represents the last full-scale build of a car he designed.  Time will tell more as our research continues.

For those of you wishing to learn more about Darrin and his history of automobile design, click on the following two links:

Click here to read an comprehensive review of Dutch Darrin and the cars he designed and built from Coachbuilt.com 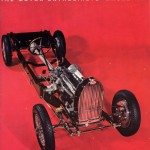 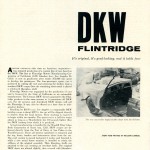 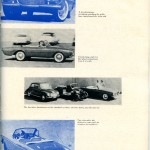 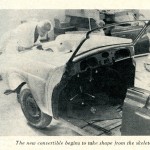 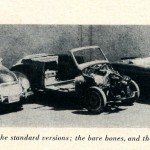 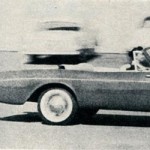