Investigating modern “finds” of Glasspar G2s and Woodill Wildfires means knowing the “lay of the land” for who built what, where, when and why.  And magazines aren’t the only clue to some of the lost history of years gone by.  Racing programs from the ‘50s also provide a wealth of information.

Take today’s program from the 1954 Torrey Pines Race on the coast of California.  While this race featured some excellent specials on the track, it also featured two “specials” in the program – a Glasspar and a Woodill.  Both interesting stories that remain to be fully told.  Click here to review more information on who and what was in the race. 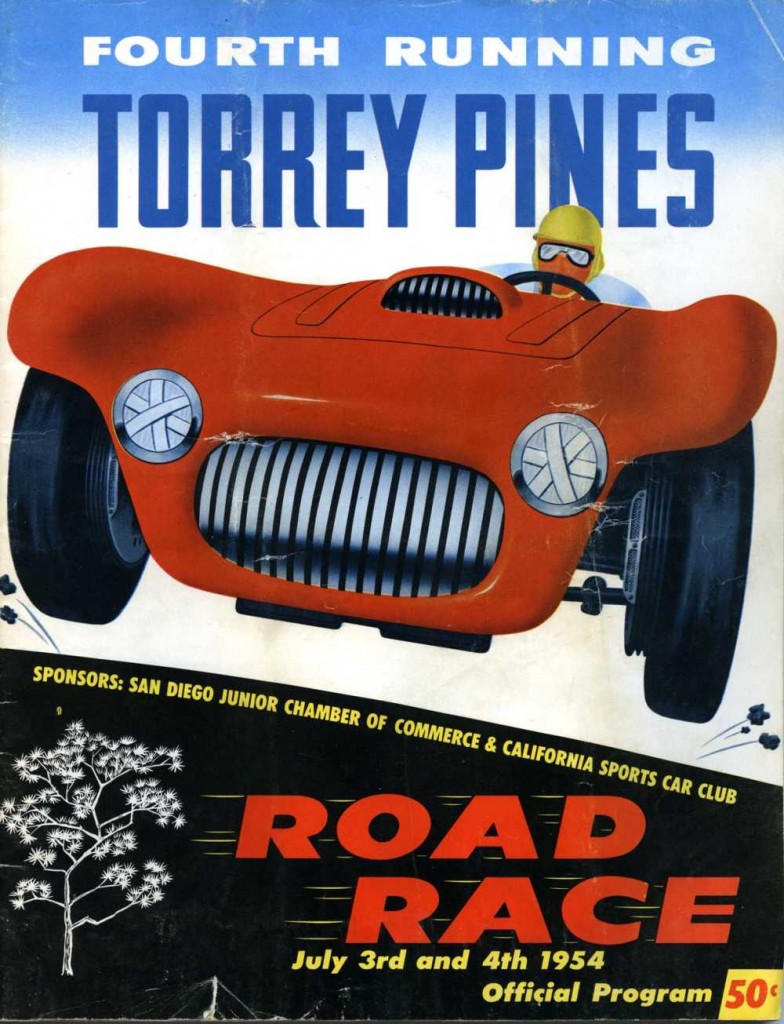 This ad does not feature a car for sale – instead – it’s an investment opportunity.  Woody Woodill was an excellent promoter and here he placed an ad to reach potential investors.  The Johnny Dark Movie was already in the can and about to be released in July/August 1954 and those “in the know” may have already caught wind of this.  The Woodill Wildfire was getting seen, and was about to become more famous.

This ad placed in the summer of ’54 would have reached those people and more.  It shows Woody standing by the driver’s door and Danny Kaye, the famed actor, at the wheel.  This photo was taken during the filming of the movie “Knock on Wood.”  Again I say….Woody Woodill was an excellent promoter.

In the summer of 1954, the Woodill Wildfire sports car was nearly a year old, and the timing was right.  Investment was key and this was one of the ways in which he did it effectively.   Let’s check out the page of the program and the ad itself: 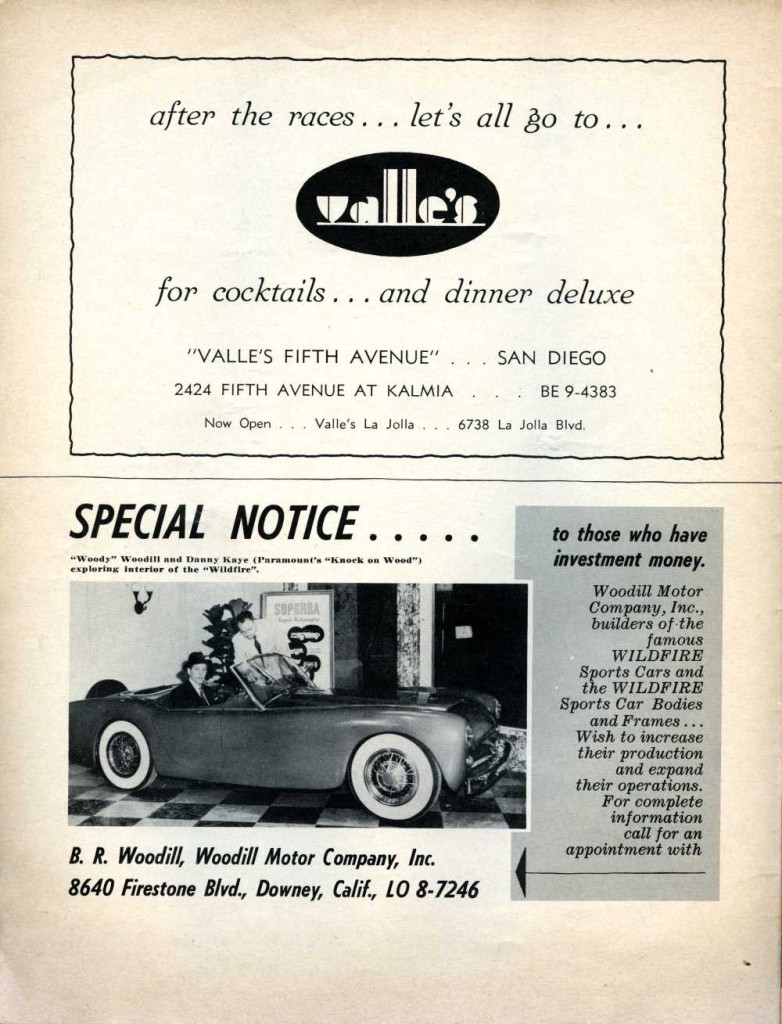 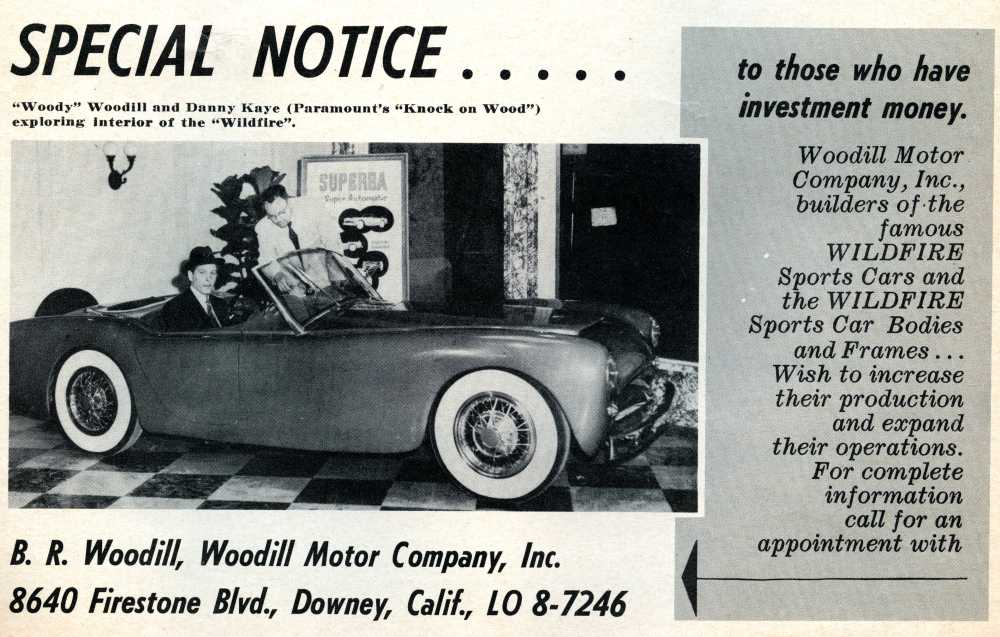 This is a very interesting Glasspar G2 (below).  I’m not sure all the modifications work for me, but still it seems quite compelling to see a nicely built car with tremendous power.  This Glasspar has a non standard windshield, custom large hood scoop, single-bump dashboard, wire wheels (Chrysler?) leather interior, and Nash grille.  And the drivetrain appears to be a Chrysler hemi – 235 horsepower.  Not bad……not bad at all.

I’ve not seen this G2 written up in any vintage magazines, so this is all we know at the time.  And, if this car is still around with few changes, it will be easy to make the ID.  Rodney Packwood – want to help?  (actually, he sent me the pages of this program some time ago).

Let’s have a look at the page of the program and the ad itself: 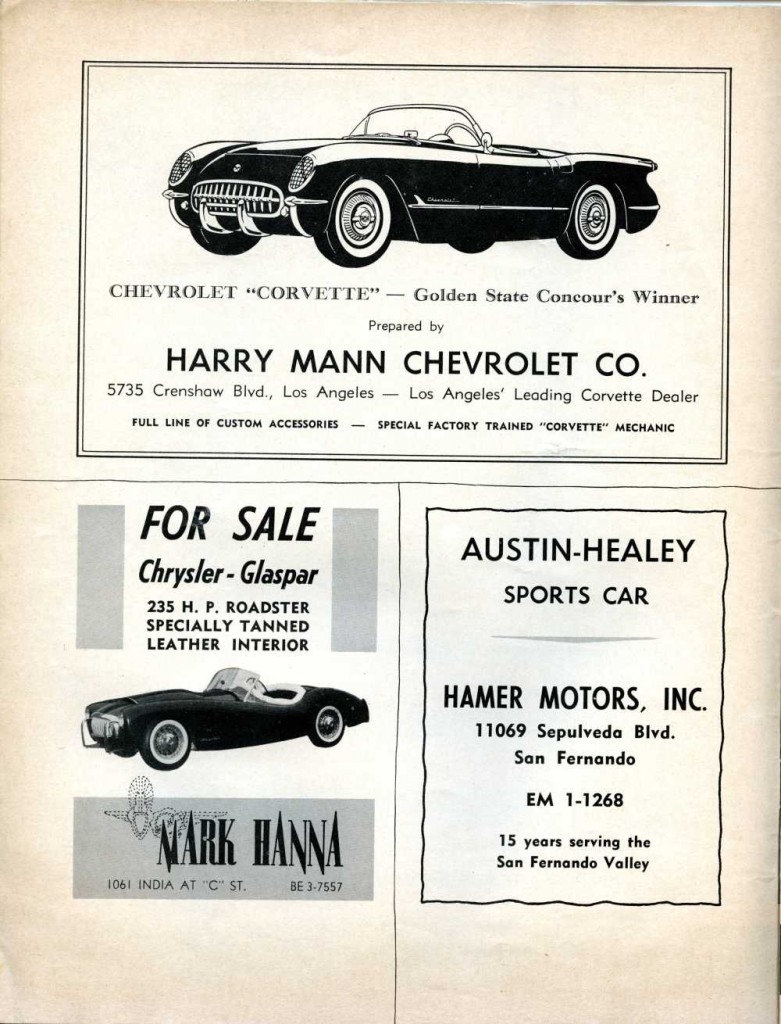 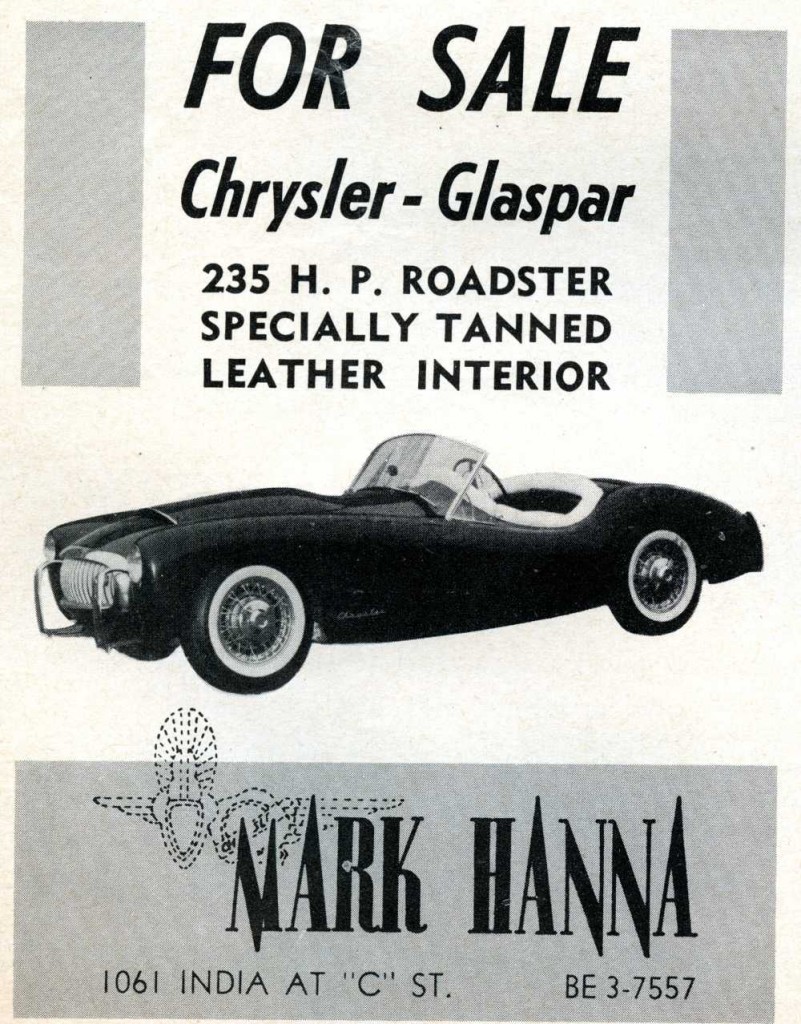 So…where are these cars today?  The Woodill shown in the ad is the movie car and was recently found needing a full restoration.  Hopefully this car will be brought back to the shape it was in the movie.  Here are some photos taken from the movie “Knock on Wood:” 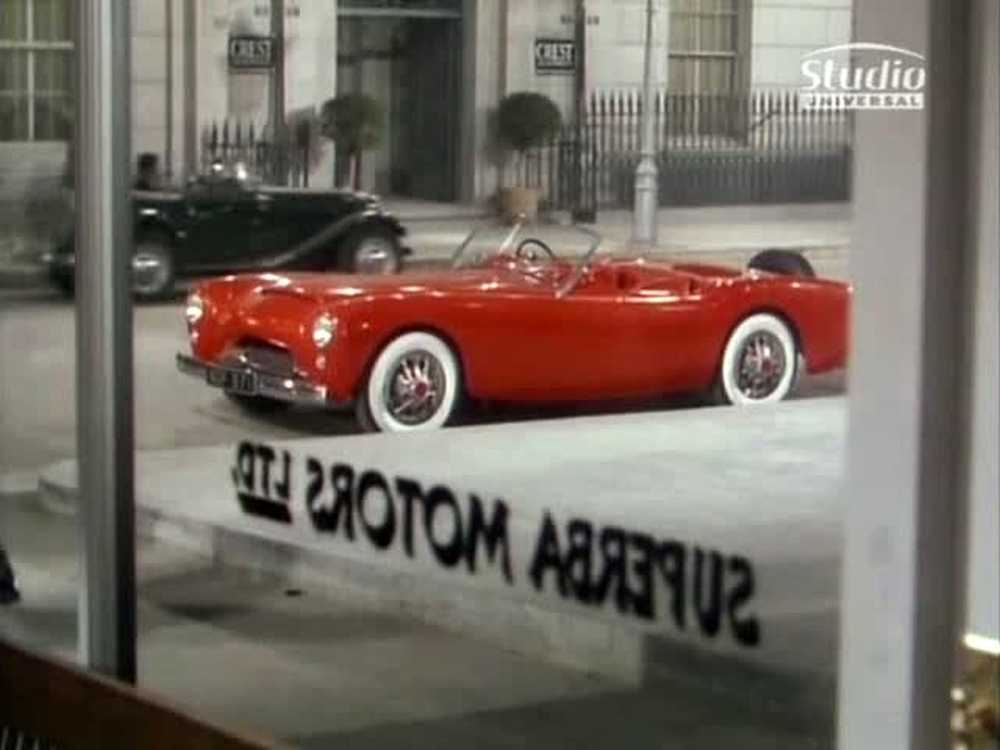 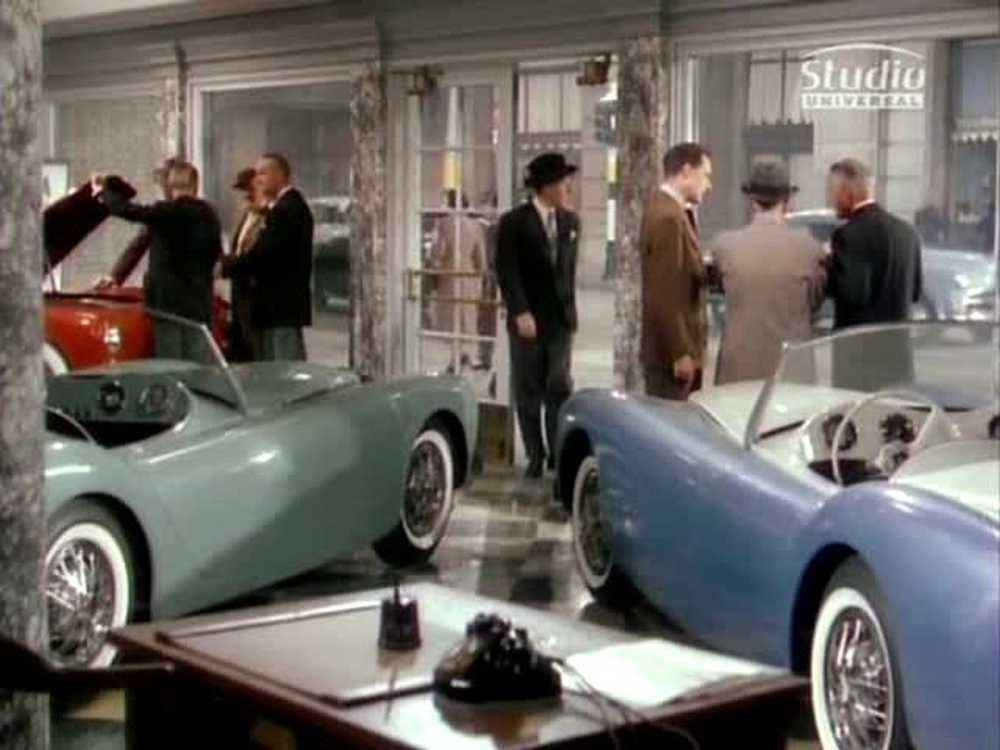 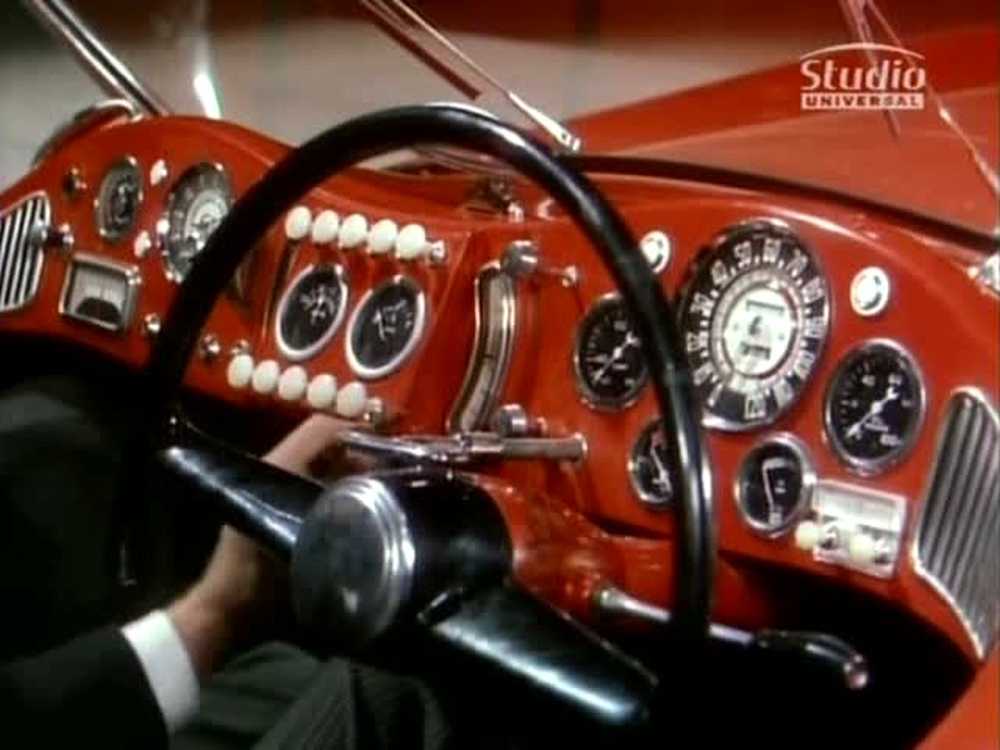 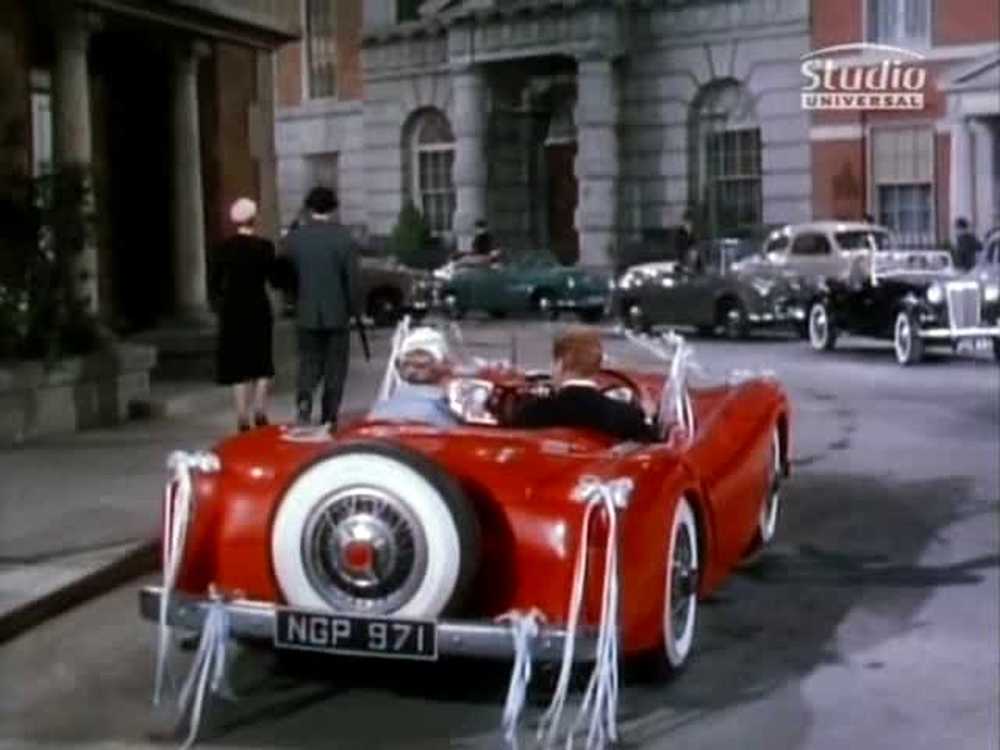 As for the Glasspar, Rodney Packwood and I have found 70 existing cars, but nothing with a hood scoop like this and/or a hump on the driver’s side dash.  So…this car may be gone or could be out there, so start looking gang and remember what Rick D’Louhy and I say when we begin our search for lost automobiles:

“The harder you work, the luckier you get…”