We’ve seen electric powered cars in the ‘50s use some of the fiberglass bodies as the “finish” to their car.  When I think “electric”, the LaSaetta comes to mind.  The Banning Electric car used a Glasspar G2 body, and the Alken was used for the Nik-L-Silver electric cars too.  We’ve even talked about “air-powered” fiberglass cars with a recent article by Will Silk.

So why not steam power!

Glenn Brummer is working on one or more articles on the steam cars produced by a company called Williams using Victress S4 bodies (or later LaDawri Cavalier bodies – we’re still researching).  However, I thought it might be fun to “jump-start” this series of articles, and share with you a brochure on the ’63 Keen Steam car – the “Steamliner.”

The brochure contains a reprint of an article published by “Light Steam Power” in the U.K. This was a magazine that focused on both modern and vintage steam cars as well as steam powered boats.

Let’s see what the brochure had to say back in the early ‘60s.

Here is a magnificent bright red, very sleek sports car of rakish design, losing nothing by comparison with the most expensive and illustrious of that ilk.  The exterior has twelve coats of rubbed down lacquer, and has beautiful magnesium wheels.

Interior décor is in black and gold, the commodious cockpit having plenty of leg room and clean swept space.  The impressive dashboard has a long array of gauges to inform the driver of what is going on with the reversing lever at the left.  It desired a foot pedal could be substituted for this lever. 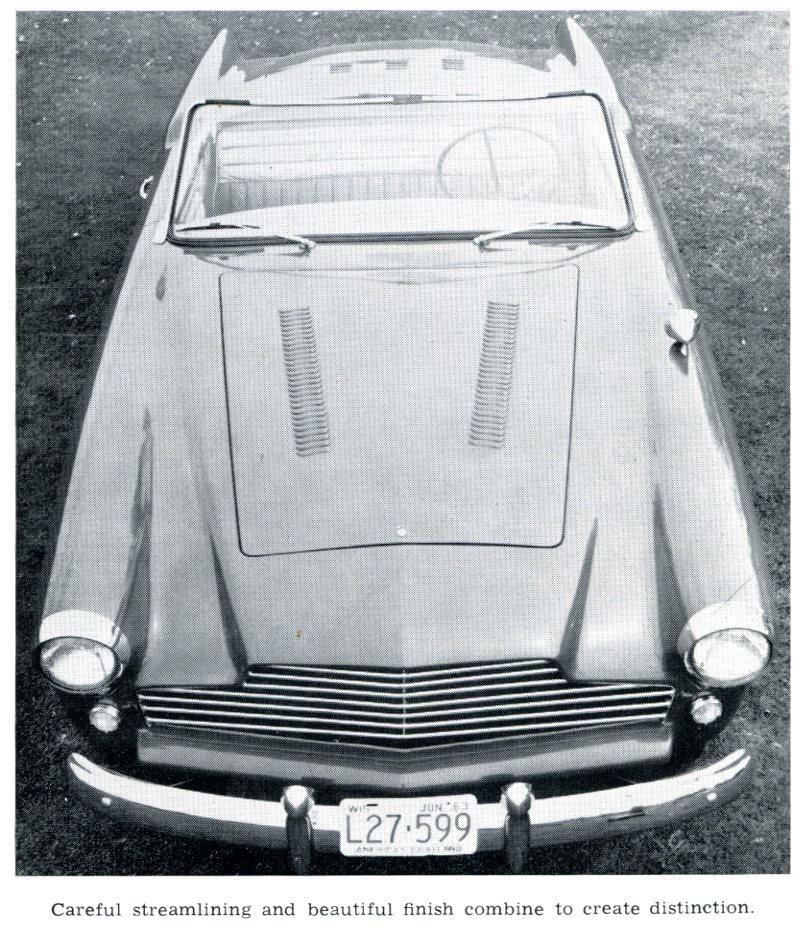 A turn of the switch and the burner ignites with a slight puff.  No smell and no smoke from oil fuel – lovely combustion.  By my watch timing, steam pressure was raised and we moved away in just over one minute with full power available.  When the power unit is warm, steam raising is practically instantaneous.  We threaded our way through heavy city traffic and then out on to the open road. 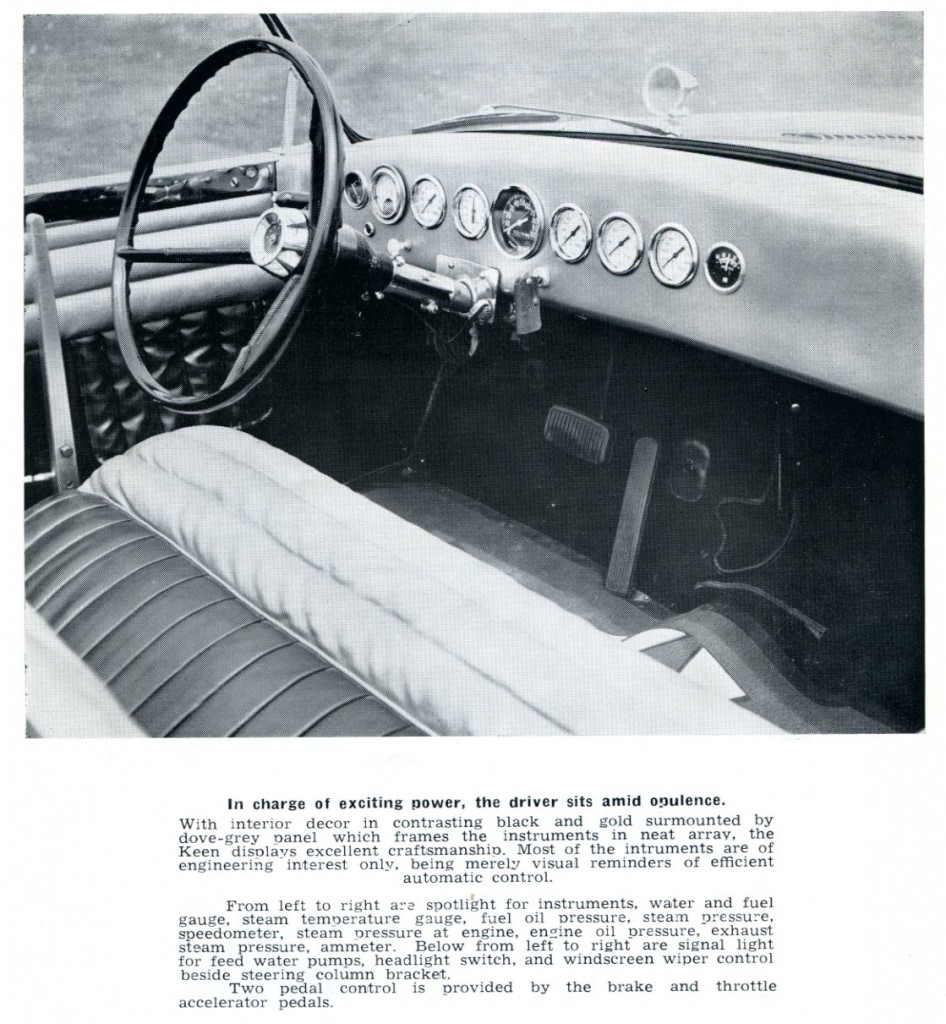 Owner-driver, designer Charles F. Keen let her out and we rolled at sixty and then at seventy, which was all traffic conditions would allow.  No fuss and no trouble.  The monotube steam generator and automatic controls provide the steam when the engine requires it, all the driver has to do in normal running is use the accelerator pedal and footbrake.

To reverse, the engine rotation is reversed.  There is no clutch or gearbox.  Acceleration is brilliant, being best described by the remark, “…at average stop lights I am across the intersection before most cars get started.”

On a spurt, pressure once dropped to 800, but promptly came back and the rest of the time remained quite steady at 1000 to 1200.  This type of steam generator, being inherently safe from all fear of explosion is not subject to insurance cover or inspection.

At 45-50 mph, the burner was frequently automatically switched off due to excess steam pressure, very rarely due to excess steam temperature, which proves the worth of the automatic control system.  There are two power settings – a low fire position which gives about 85 mph top speed and the high fire with about 100 mph available.

Cheap paraffin (kerosene) or furnace oil gives an economical 12-18 mpg (10-15 mpg American), depending on driving conditions, with improved economy envisaged for the future.  Ordinary tap water is used and, with the steam condensed for re-use, the water tank need be only rarely filled.

The engine and pumps are extremely quiet, comparing favorably with a perfectly tuned internal combustion engine. On a sudden hard pull, one is aware of a slight pulsation, but it is not very noticeable unless one is told to watch for it. 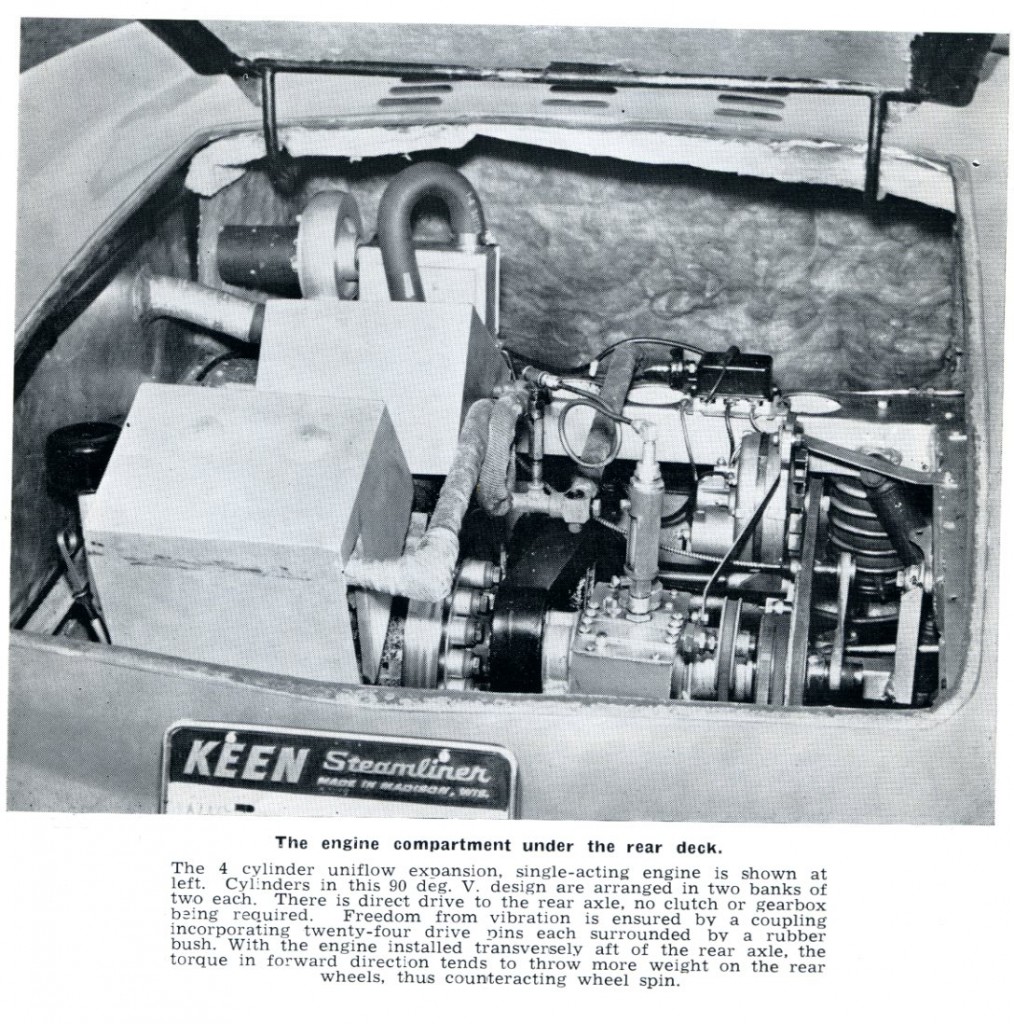 There are several positions for variation of cut-off (which is the fraction of the piston’s stroke during which steam is admitted to the cylinder).

Engine drive coupling contains 24 drive pins each surrounded by a rubber bush to give smooth, silent transmission.  When riding along at 25-30 mph, it is impossible to know whether the burner is on or off.

With four cylinders – the equivalent in power impulses of an eight cylinder internal combustion engine and 100 cubic inches (1639cc) capacity, the compact V4 design gives 130 horsepower, which can be increased if needed.

Steam distribution in the cylinders is on the uniflow principle, in which steam enters through a valve and exhausts through ports cut in the cylinder walls near the end of the stroke.  Very high torque is available at very low rpm, so high that there was a danger of excessive wheel slip during acceleration. 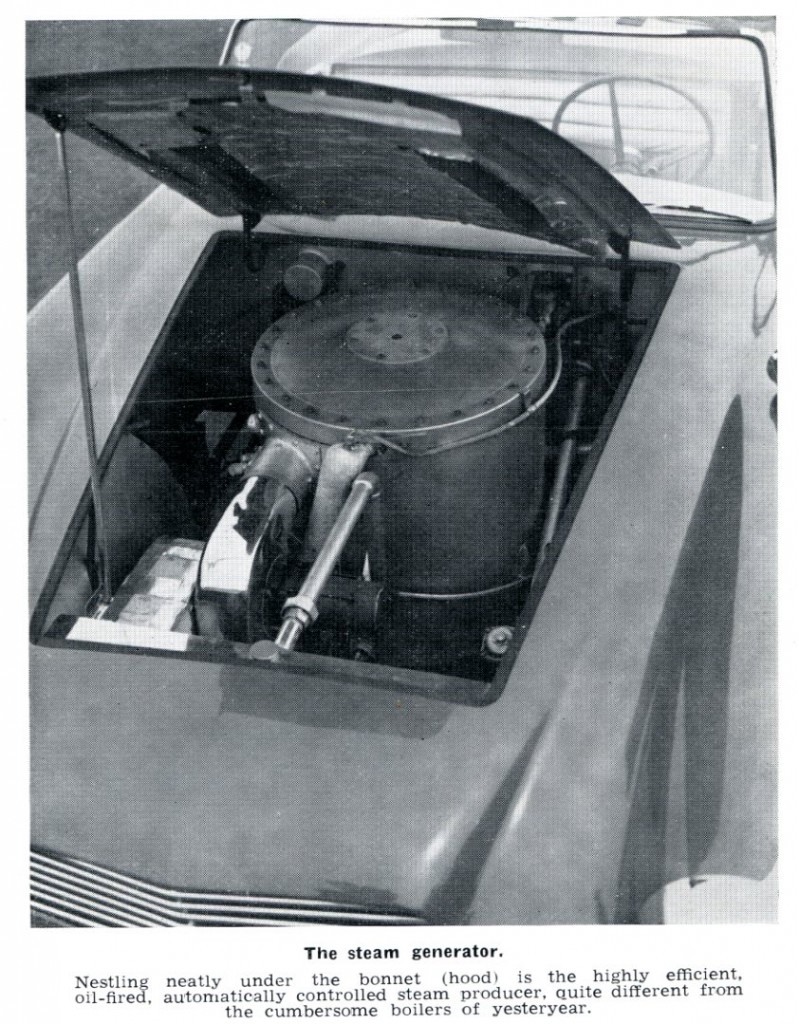 For this reason, the engine is placed transversely behind the rear axle so that when power is applied going forward it throws more weight on the rear wheels, thus avoiding wheel spin.  Also when the throttle (accelerator) is tromped on, the car hugs the road rather than creating a tendency for the front wheels to lift.

That this arrangement is of great practical use is made evident by the ease with which the rear wheels can be made to spin when reversing.

Gone are the days of the bucket of coal, belching smoke, and greasy rag.  Steam is generated automatically, without noise, smoke or troublesome fumes.  Combustion is so good that there is none of the noxious odor associated with the diesel and, to the lesser extent, with the petrol (gas) engine.

Air and oil spray are blown into a totally enclosed combustion chamber at the top of the steam generator, and the hot gases give their heat to closely wound coils of immensely strong tube before being allowed to escape from an exhaust duct beneath the body of the car.

Water is pumped into the coils of tube, turning to steam therein, which is admitted to the engine via a throttle valve operated by the accelerator pedal.

Steam pressure is automatically controlled at a maximum of 1200 lbs. per square inch by the action of a pressurestat, which switches the fire on and off to suit the engine’s demand for steam, as controlled by the throttle. 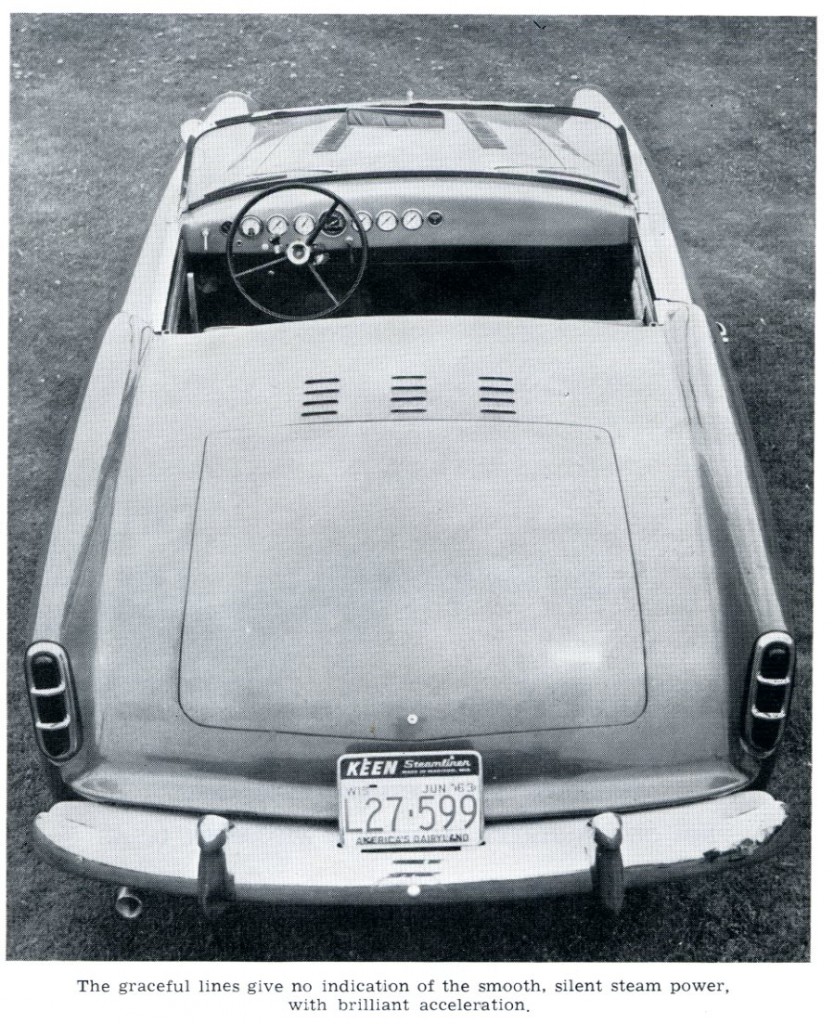 The normalizer allows a small spray of water to be admitted into the hot or superheated section of the coiled tube, cooling the steam before its exit to the engine and enabling the thermostat to maintain a steady steam temperature.

The whole nestles unobtrusively under the bonnet (hood).  This is a very light-weight, compact steam producer, not to be confused with a heavy, cumbersome boiler.  Starting is even more simple and reliable than an internal combustion car.  You just turn a switch.  There is no need to wait for the engine to fire.

Within the minute, stored power is available to make the car accelerate right up to the maximum speed as fast as the tires will allow, without a pause for gear changing.  A familiar car in Madison, Wisconsin, USA, is the Keen Steamliner, but nevertheless one which rarely fails to merit excited comment.  Preliminary arrangements for eventual manufacture on a commercial scale are being made.

Enquiries should be directed to:

It’s also interesting that the car only had a passenger door.  This was much more indicative of early ‘50s sports cars, and not later ones.  Perhaps the engineering of the car required this space where the driver’s door would be to be used for an alternative purpose.  I’m sure Glenn Brummer will address this issue in his future write up on this car.

And good news is that both this car and another steam car using a Victress S4 body have survived.  Glenn will share with us more detail as his story nears completion, so keep your fiberglass channels tuned to Forgotten Fiberglass! 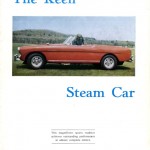 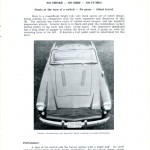 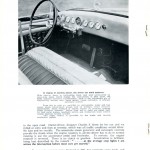 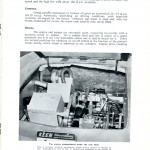 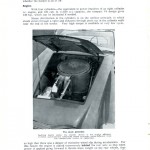 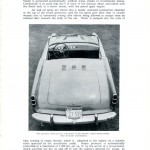 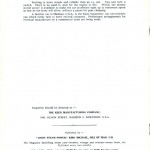 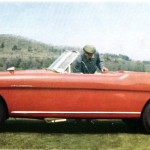 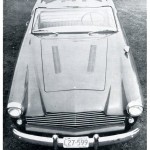 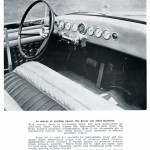 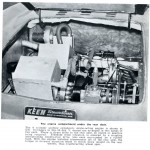 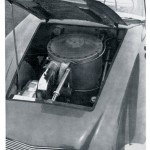 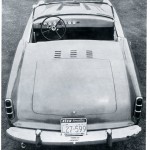 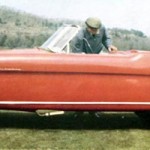