I have been searching for the original copy of this ad for 5+ years.  And one of our Forgotten Fiberglass Fanatics delivered it once again.  I work with the greatest gang of car guys in the world 🙂

The ad first appeared during research that Jon Greuel was conducting, and we never could trace its original source – until now.  Richard Lewis – original Allied Swallow Coupe builder and owner – sent this in from his collection late last year.

And how did he come across this copy?  He belonged to the 500cc Club of America and received their monthly bulletins back in the ’50s and early ’60s.

Wow!  Today’s newsletter even has his name and address on it.

As I say time and time again….”I’d rather be lucky than good.”  It will be my epitaph.

Meantime, there’s lots of fiberglass research to keep me busy!

So let’s have a look at the ad: 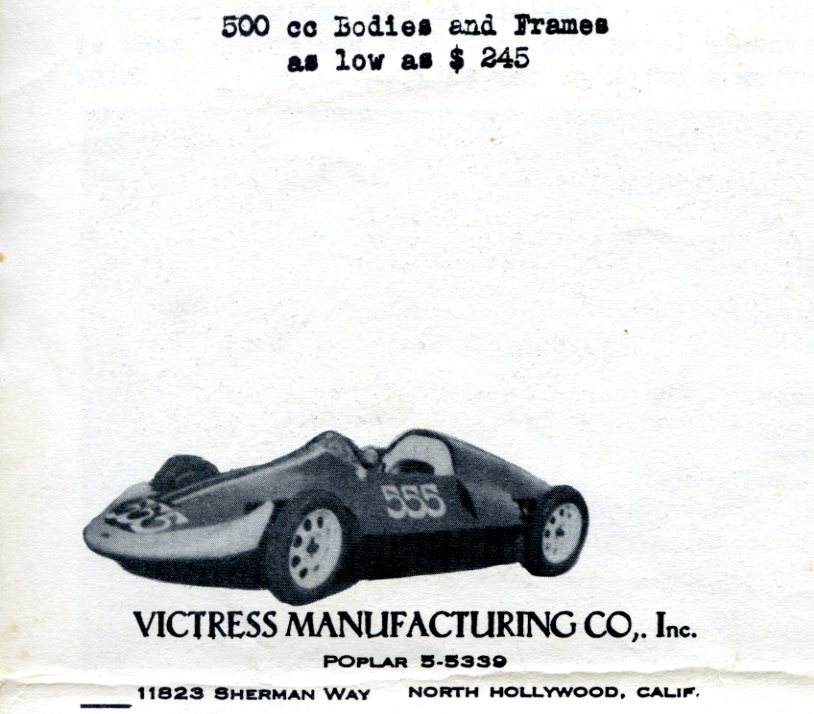 And…let’s look at the page that it appeared on (front and back). 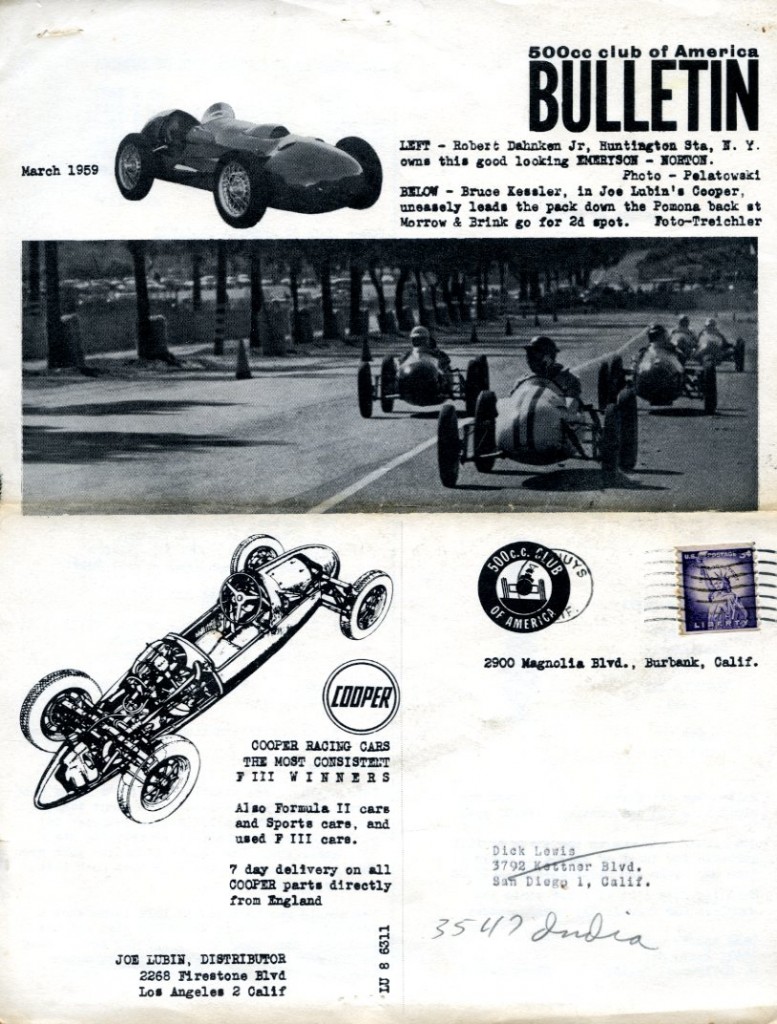 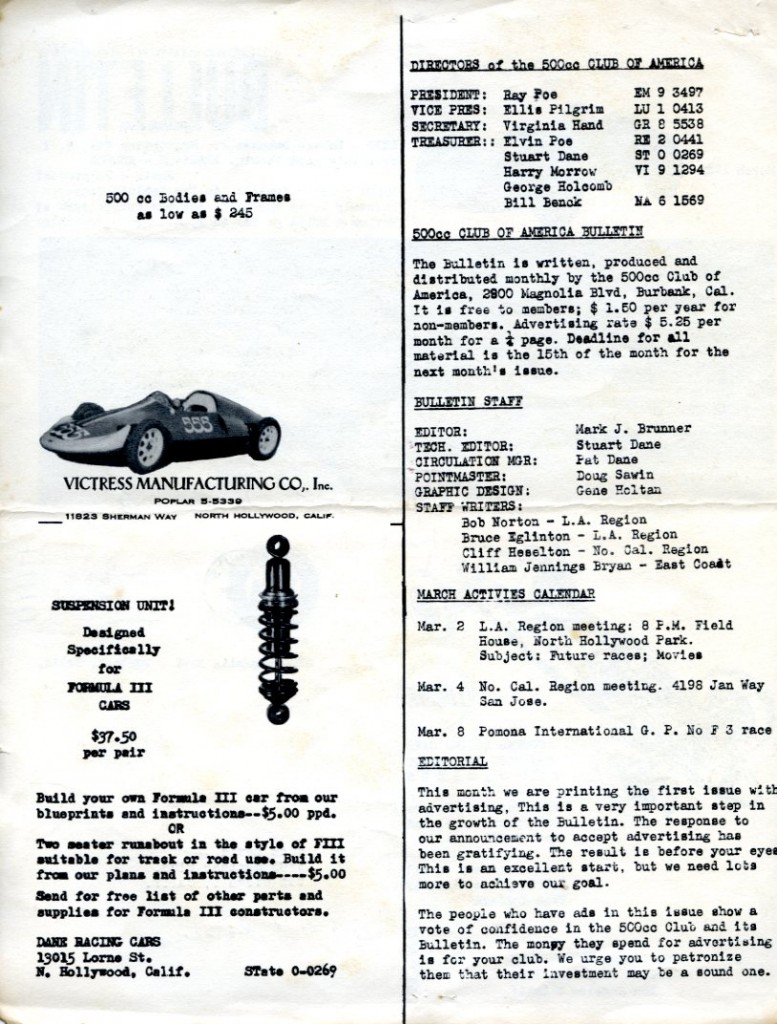 Thoughts on the Ad:

I’ve never found reference to these bodies built by Victress before.  Merrill Powell, Vice-President of Victres Manufacturing from ’53-’61 was just as surprised to see the Victress ad as I was.  However, he did share with me the following detail:

When the quarter-midget phenomenon starting expanding across Southern California, Victress produced a number of different quarter midget bodies in fiberglass.  We did this for several companies located near us in North Hollywood, who had molds for their small bodies.  They would bring them to us and we would make one or more fiberglass bodies for them depending on their needs.  Then, they would collect their bodies and molds, pay for their merchandise, and be on their way.

We even designed and built a quarter midget “by Victress”, based on the Grand Prix car called a Squallow.   Now renowned designer – but Art Center Student then – Chuck Pelly designed it for us.  We never advertised the quarter midget Squallow – as best I remember.  The project was short-lived, but we did sell a few bodies.  In fact, I think your friend Rick D’Louhy has one.

I don’t remember the body shown in the ad for the 500cc race car.  But if someone had a mold for the race car shown in the ad, we would have popped a body out for them and worked with them to sell it – or as the manufacturer of those bodies for them.

Thanks goes out to Merrill Powell for taking the time to outline his recollections.  Merrill…if you have more thoughts on this subject, please let us know in the “comments” section below 🙂

I noticed one more interesting piece on this newsletter page.  Here’s what I saw: 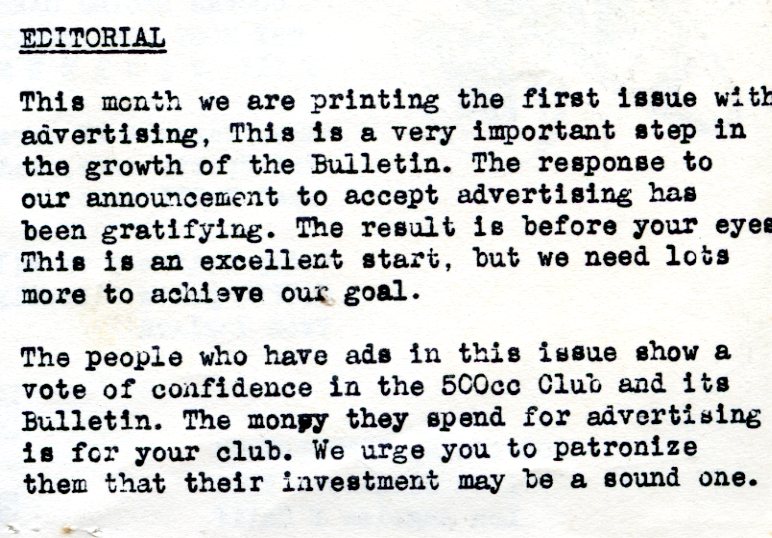 This appears to be the first issue with advertising for the 500cc Club of America.

So…the ad for the Victress 500cc bodies and frames may have been a paid ad that Victress was doing for “research.”  It wouldn’t be the first time that a company tested the waters to gauge the interest in a product – one that they could quickly fill if a need was identified.

Richard Lewis had only retained the first page of this 500cc Club of America Bulletin so I don’t know how comprehensive this newsletter was each month.  I’m currently researching where additional copies of this newsletter may exist – it sounds like just the kind of research project that I like.

Wish me luck, and we’ll see what we find over time.

Thanks again to Richard Lewis for keeping this ad all these years (50+ years as of today).  I wait with bated breath each day to see what Richard will find in his collection for us next.

He never ceases to amaze me.

And thanks again to Merrill Powell for his constant support of our research here at Forgotten Fiberglass.