Working with good friend Darren Swanson, we’ve gone from a mysterion (mystery car), to a one-off Kaiser concept sports car, to a limited production sports car with up to ten bodies and sports cars being completed.  Not a bad adventure!

What a great end to a mystery and the beginning of a new story – a man and his dream where creativity meets design and perseverance – the story of William Papineau and his 1955 Cougar Sports Car.

Let’s hear from the primary historian for this car and now leader of the “William Papineau’s Cougar Owner’s Group” (WPCOG) – Darren Swanson.  Take it away Darren 🙂 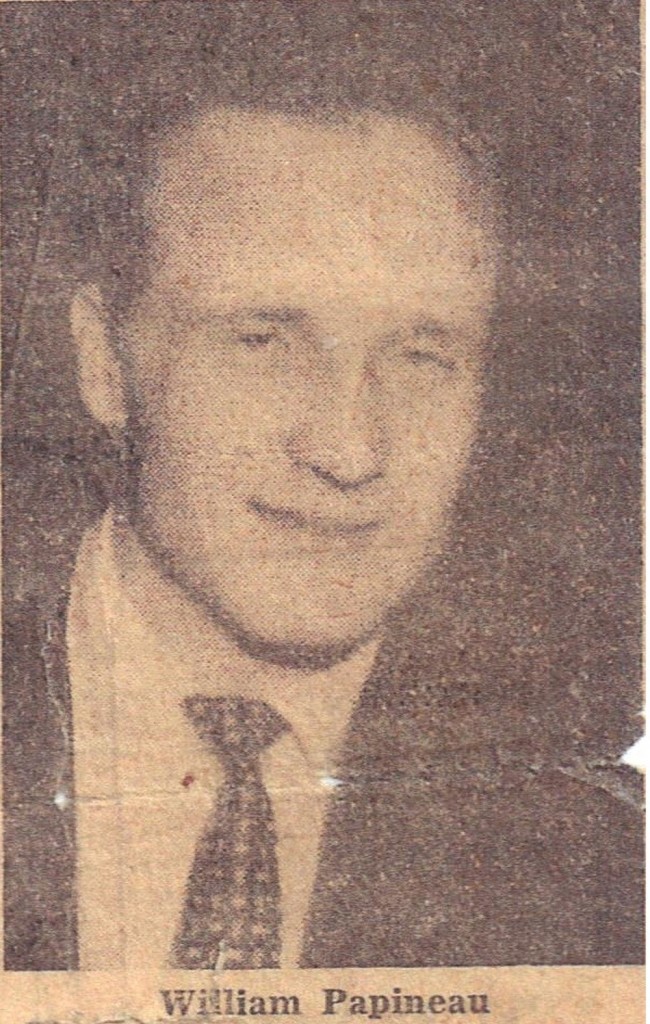 In late 2008, I purchased the Kaiser Mysterion and began researching the origins of the car.  From the beginning I had two goals:

I wanted them to receive the credit and recognition that they deserve.  Searching for answers and facts on any research project can be very difficult, and much like hunting for a Cougar or a Snipe – they are very elusive.

Recently I received an email from Geoff Hacker with the brief message: “I found who made your car.”  It was April 1, 2013 (April Fools Day), and Geoff was well aware that I was close,  however I had been missing a few key pieces for some time. 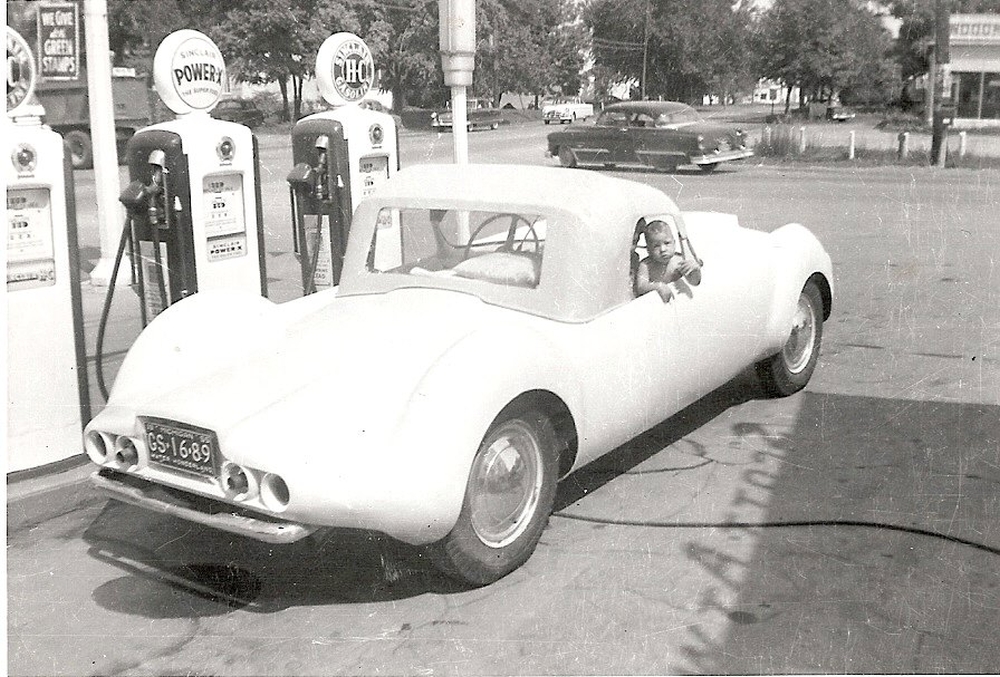 I immediately assumed that he was playing a prank on me.  Still, I called.  As soon as I told Geoff who I was, he laughed and said, “I wondered how long it would take you to call.”  I was certain at this point that he was playing a joke on me.  As we talked, he told me that he had a press photo of a car that looked just like mine, and it contained some information on the back.  He emailed copies of the front and back of the photo.

The car in the photo had the same body as mine, but this one was complete.  The back of the photo had two dates in March of 1955, a name and address, and referenced the car as Cougar.  Thus began my search for William Papineau and his family.

A couple of evenings later I was able to make contact with one of William’s granddaughters, and then her father, Robert.  We traded some information via email and then by phone. 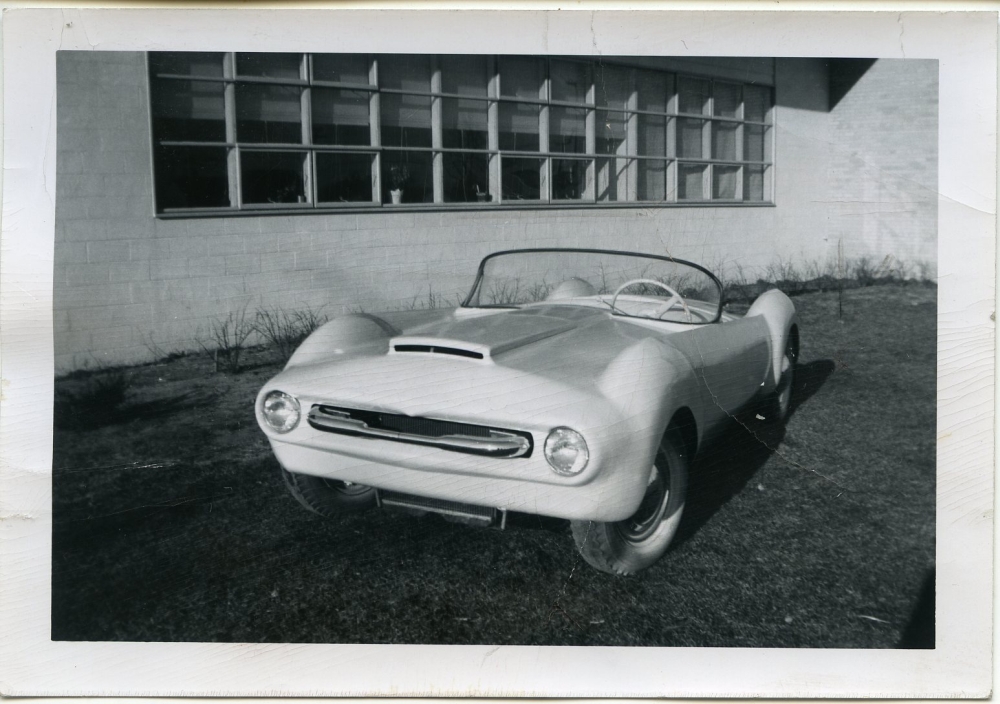 The conversation I had with Robert was wonderful and very informative.  He told me about William, what he knew about the cars, and some of the other things that William has done through the years.   As noted on the back of the photo that Geoff shared with me, William called the car the “Cougar”, and at least two newspaper articles were printed about the car.

One of my first questions was why he decided to build a car from scratch, and why from fiberglass?  The answer I received was very interesting.   William wanted to create a car that didn’t fit the traditional mold and he was intrigued by this new material.  His goal wasn’t to create a company to make and sell bodies, nor was it to propose the design to one of the major manufacturers, as we had previously thought.  Originally he intended to build just one car.  However it drew so much attention that he created several. 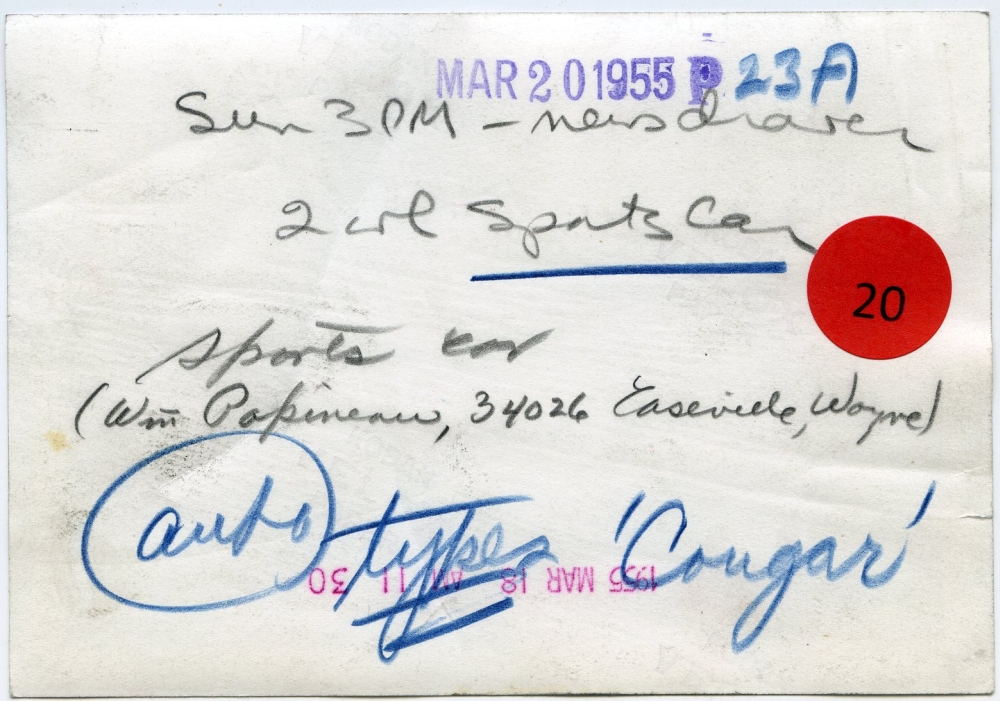 William, like many young men, was drafted and served in Korea during the early 1950s.  It was during his deployment there with the 45th Division that he began to design the car.  He wanted to create a design that was sporty, aerodynamically sound, and most importantly wasn’t like traditional cars that were overloaded with unnecessary chrome, trim, and accessories.

Simply put, he wanted a car that was purely functional and fun to drive.

After returning from Korea, he began his quest to turn his idea into a 3 dimensional object.  Like many of the other cars we’ve read about on Forgotten Fiberglass, William’s car started out with some preliminary sketches, and then more formal sketches with dimensions and notes, followed by a clay model and then a full size model of wood and plaster.  During the sketching phase, he even took the time to create two versions of the car so that it could fit almost any chassis. 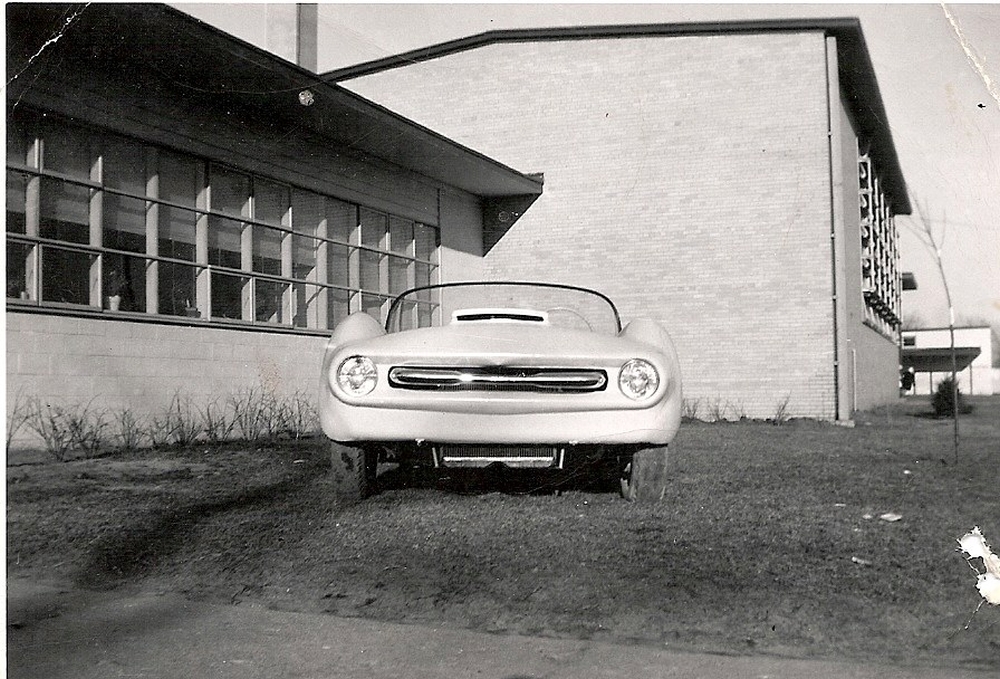 We aren’t certain if this was because he still needed a chassis, or simply to see his vision in several forms.  After the full scale wood and plaster model was built, William created a mold which was then used to create the first Cougar body.  The first car was built on a Ford chassis (we believe it to have been a 1940 Ford), and was powered by a Ford V8 engine.  Later, bodies were fitted to Studebaker and other chassis.  The example in the press photo, and the unfinished example that I own, are both the shorter wheelbase version and sit on Henry J chassis.

Most of William’s automotive experience was working for the Kaiser-Frazer Company prior to being drafted.  At Kaiser, he was a “Release Guy.”   “Release Guys” were talented men who could learn multiple roles quickly, easily, and showed skills in leadership.  Many times these men were group or line leads.  Frequently they were pulled from one area of the plant to another to fill in for employees that had quit, were sick or absent, or where the production line was getting behind and needed help catching up.

The project took him a little over a year to complete, which is very impressive when you consider the following:  He wasn’t formally trained in the design/build/mold making process. While building the Cougar, he was raising a young family and teaching at Bentley High School as a Social Studies teacher. 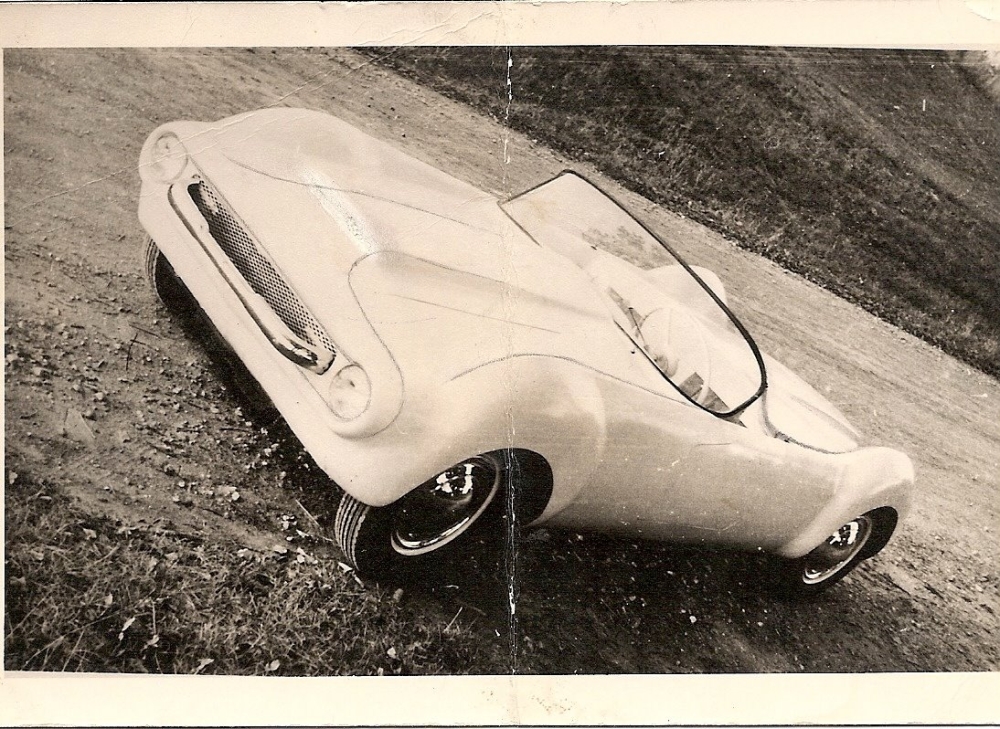 His new car drew a lot of attention and questions from others asking how they could get or create their own cars.  Between 1953 and 1955, William created between 7 and 10 car bodies.  Most were completed cars fitted to various chassis provided by the owners, or ones that William could obtain, but several like mine and one that was intended for use as a Pikes Peak Hill Climb Car, were sold as bare and unfinished bodies.

As I wrapped up my interview with Robert, I asked one final question.  “What happened to the cars and molds, and do you know where they are now”?  Robert wasn’t sure, but said that his dad didn’t keep any of the cars himself and sold the molds when he finished with the project.  He gave me a general geographic area of the last know location of the molds (20 years ago) and said that his father saw one, somewhere in Tennessee, about 30 years ago,  when they were traveling and stopped somewhere.

We know from talking with the Over The Hill Gang (Pikes Peak Hill Climb Club) that a Cougar was supposed to run at Pikes Peak in 1956 but it never arrived.  They also have no records that show who registered the car.  We know that one was built on a Ford chassis, one on a Studebaker chassis, two on Henry J’s, and one of the cars was light blue in color (either the first one or the one in the press photo). 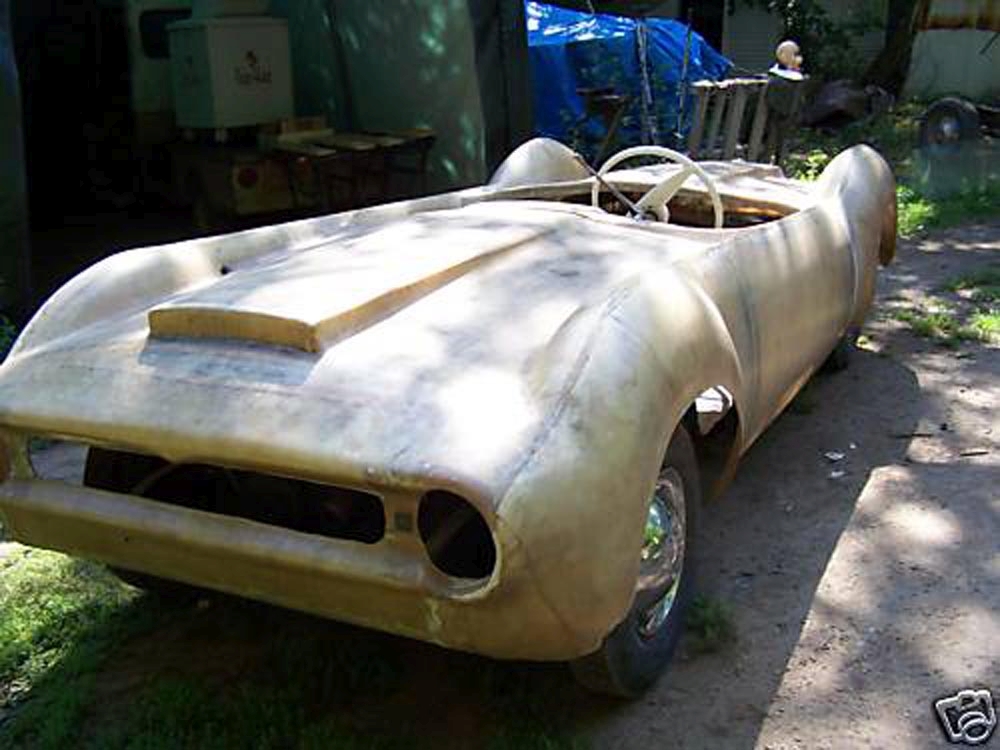 Here’s Darren’s 1955 Cougar – And What A Great Story He’s Uncovered Of It.

One of the things that Robert mentioned to me during our conversation was his desire to give his dad a ride in one of the cars.  Mine is far from complete and driveable, however I’m hoping that we can reach out to the car community and locate one or more of these cars to help arrange for that wish to come true.

I would like to give special thanks to Rik Hoving, Bob Cunningham, and David Greenles for spotting and pointing the photo out to Geoff.  Without knowing it, they pointed us to the missing piece, the key I’ve been hunting for.  I also want to thank Geoff for his help, encouragement, and the many emails and phone calls that we’ve traded throughout the research process (1572 days, but who’s counting).  Without all of their help, and the support of others, I’m certain that the Cougar may have forever remained a mystery.

So…where does this leave us with story?  So much new information and a great addition to the history of designing and building your own sports car in the American postwar years.  But wait fiber-gang….there’s more!

First.…we have at least one newspaper article to share with you in future stories here at Forgotten Fiberglass.  Darren…can you help write it up?

Second….who wants to help find those missing nine cougar sports cars/bodies out there?  While most may be gone, I hardly think that Darren has found the last one left. Is there one for you?

So much to do and so many of you out there to help do it 🙂  I look forward to writing up your own fiber-adventures in search of other versions of this special sports car – William Papineau’s 1955 Cougar Sports Car.