Tracking back the history of the cars we have today is always exciting, and today’s story is no exception.  Les Zoller contacted me recently and shared with me that he had owned and restored Allied Kurtis KK500 chassis #43 and asked if I want to learn more.  You betcha – and away we go.

In the late 1970s, Les lived in Huntington Beach, California and on his way to work each day he saw an intriguing shape of a car under a cover.  It sat there for about a year never moving but one day part of the cover was off and he decided to go investigate the car and talk to the owner.

So he drove to Long Beach, and introduced himself to the owner – Russell Brandt.  Russell said, “It’s a 1955 Kurtis and do you want to buy it”.  Not a simple proposition.  Les asked about the history of the car, but nothing was known other than Russell had bought the car from a person in Anaheim Hills, California.  This was the first time that Les had ever heard of the Kurtis name, but he was interested.  Initially the asking price was quite high for this car in 1979, but after quite a bit of time negotiating he got the price down to a reasonable number for a car of that era.

In May, 1979, the Allied Kurtis Blackhawk Coupe met its new owner – Les Zoller – and Les trailered it back to where he lived and starting making his restoration plans.

What Did He Have?

The car had been painted a metallic blue, and overall it was in nice physical shape.  Photos below were taken soon after Les acquired the Allied. 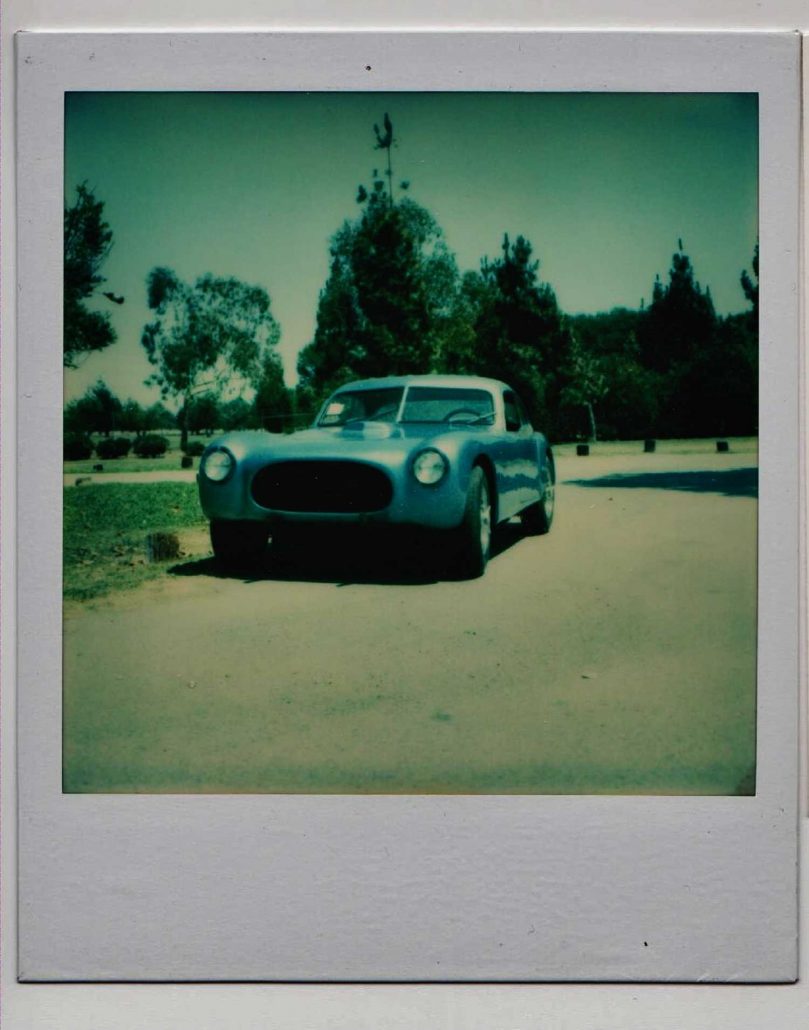 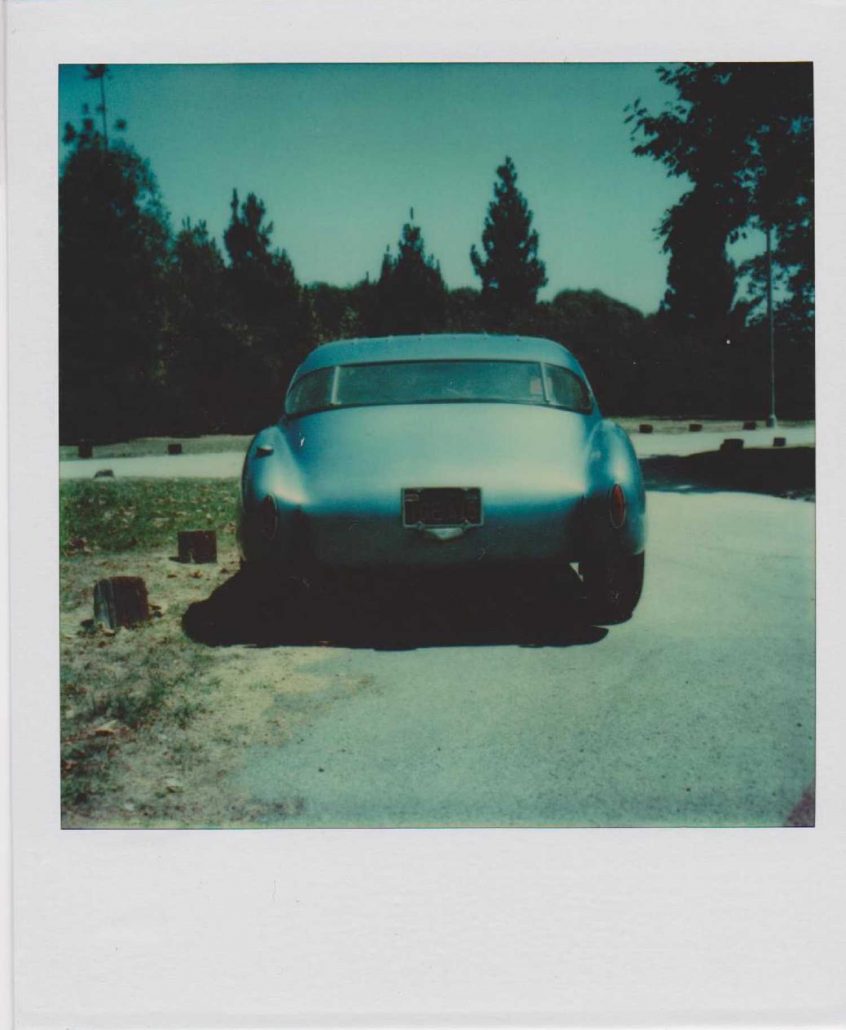 Getting the car to roll didn’t look like it would be so hard.  The tires were under inflated and it looked like it would roll just fine.  It almost would.  It turns out that the big Lincoln engine had a big production oil pan and skid plate.  The weight of the front of the car was on this skid plate.  The Allied didn’t run, but a bit of air in the tires would do the trick and it would roll fine.  But that oil pan and skid plate – so close to the ground – would have to be addressed – later.

When Les bought the Allied Kurtis it didn’t run.  He worked on the car a bit and found that it hadn’t run for years – gas tank, brake lines…all needed to be repaired and/or replaced.  Nothing unexpected.  Les recounted the specifics of his car and what was in it when he found it:

Plans were to begin the restoration which started in the summer of 1982.  Photos below show the Allied in front of the workshop were it would be restored and in very nice shape – still wearing the 1955 Buick wire wheels that were found on the car when acquired by Les.  These black and white photos show the nice outward condition of the car at that time.  What a great place to start the restoration from. 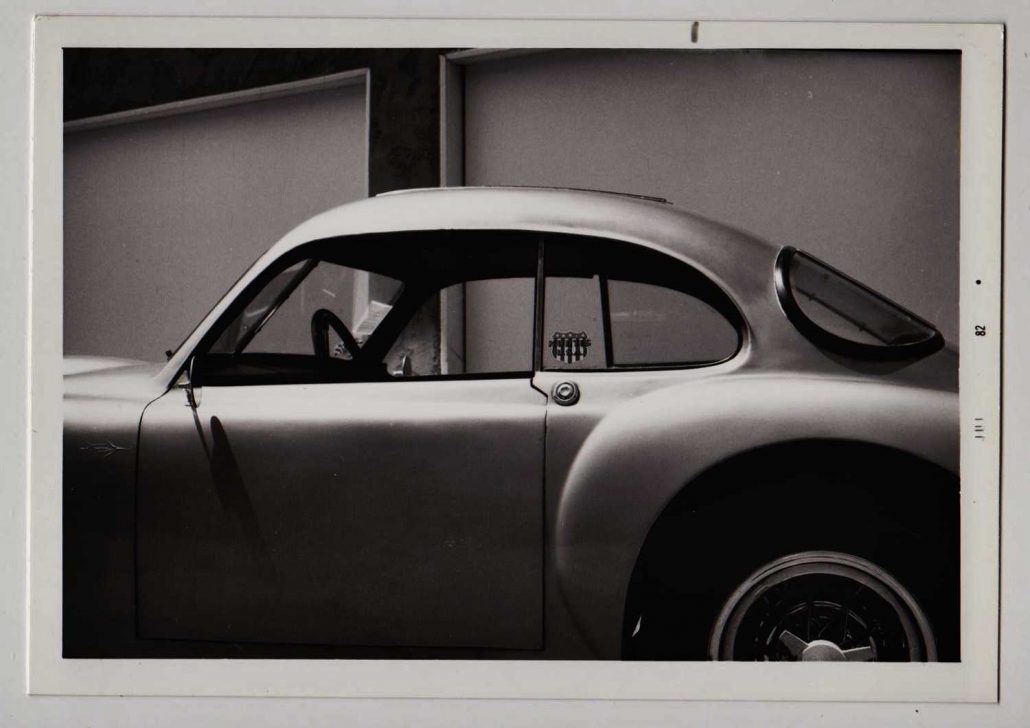 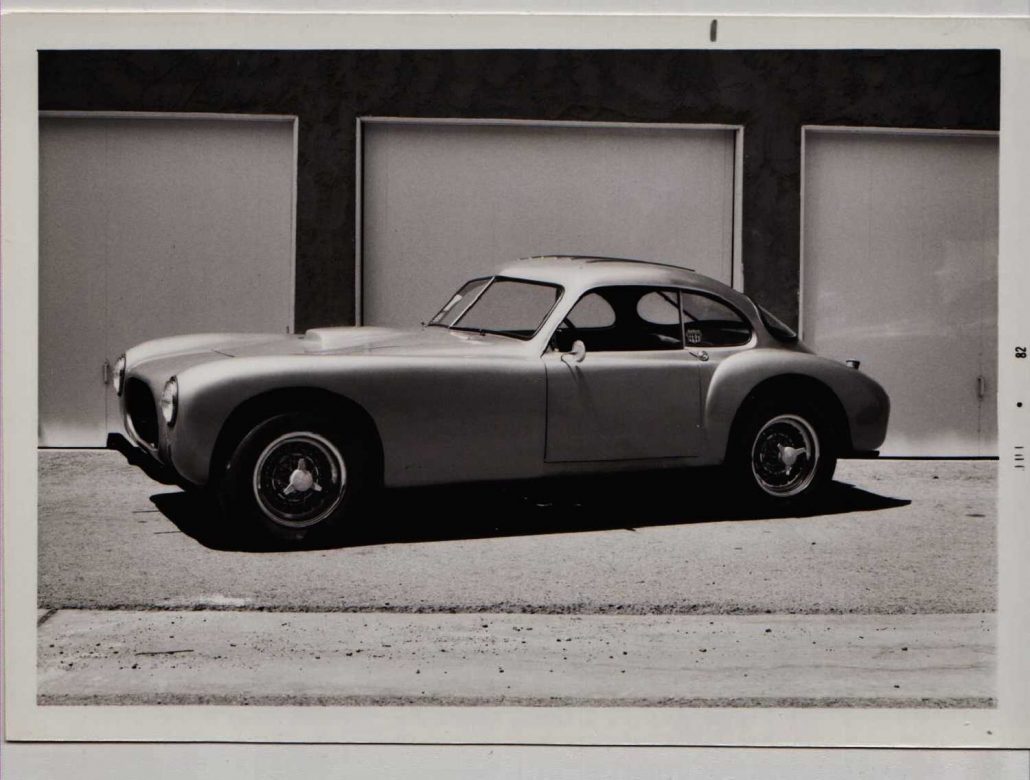 Plans were to restore the car for vintage racing – becoming quite popular in the 1980s.  Restoration was planned to keep it as close to the 1955 era as possible.  Les started by testing the engine and got it running for a few seconds at a time.  Just enough to make sure the engine was usable.  Then he started taking the car apart – first separating the body from the frame. 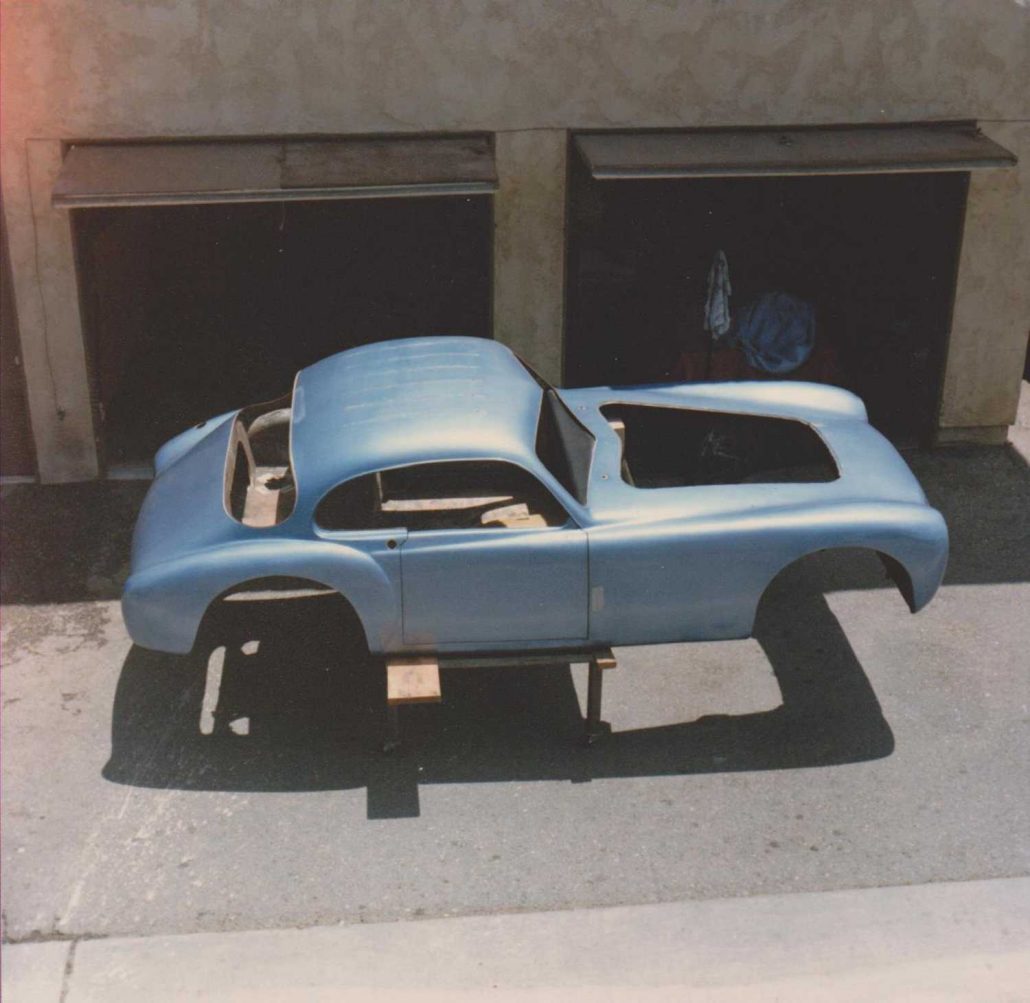 When body work began, Les shared with me,

“The car was metallic blue when I bought it and when it was sanded down it had a white, probably , gel coat.” 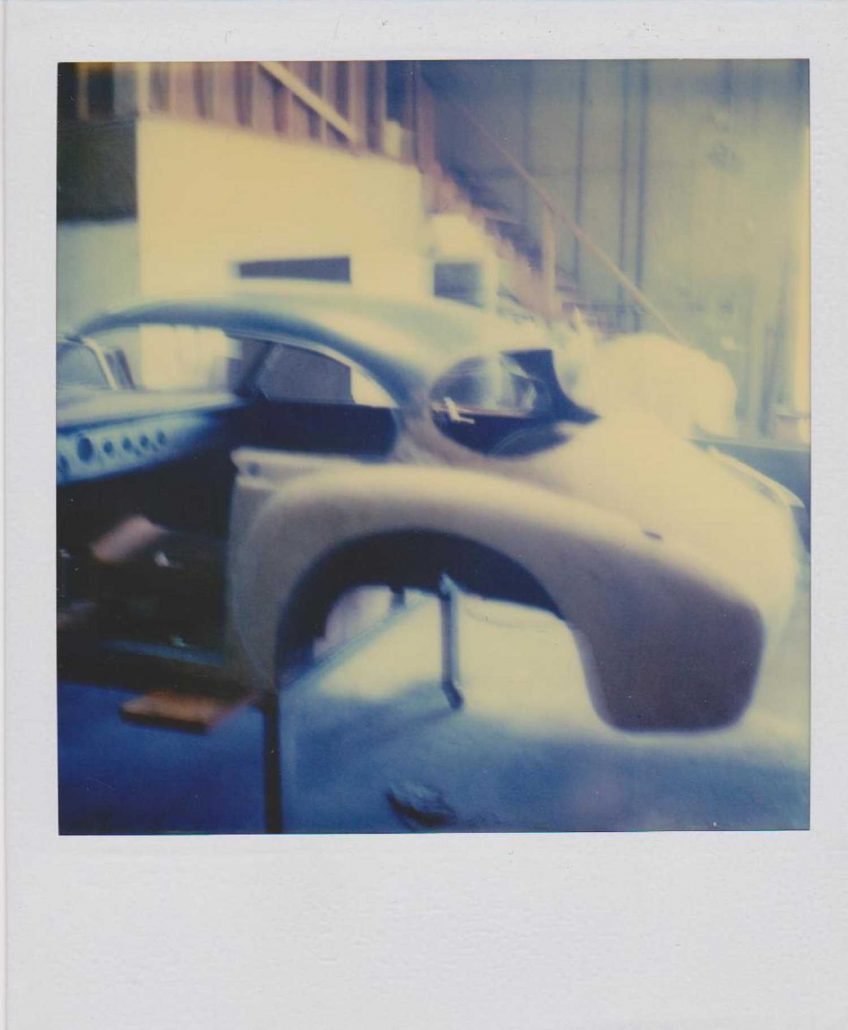 Next focus was restoration of the frame.  Let’s take a look at two photos of the Kurtis chassis after restoration had begun. 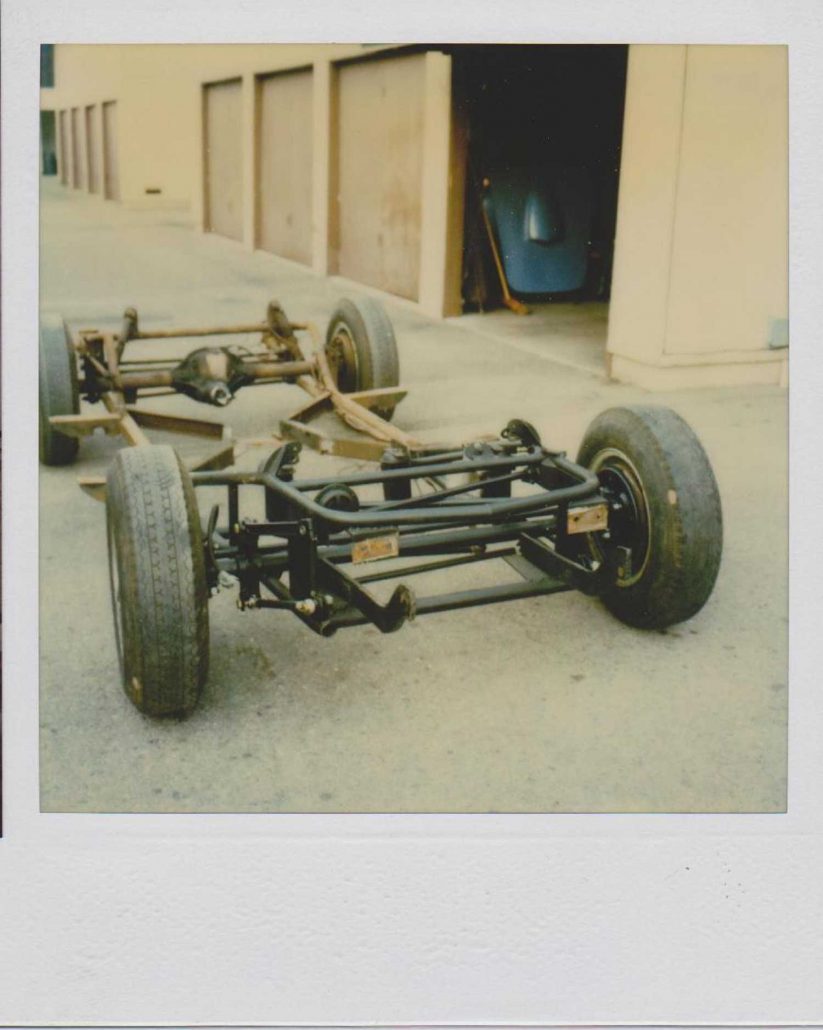 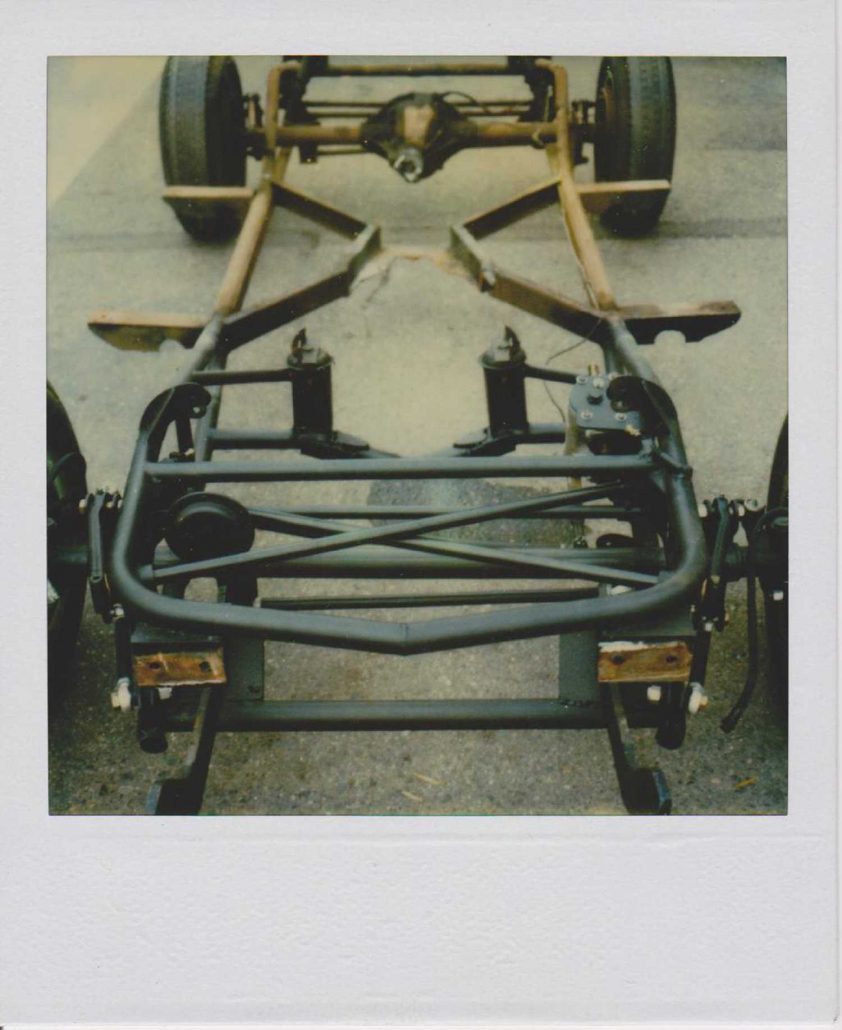 Les shared his memories concerning the frame and its restoration:

“After an inspection of the frame I decided to take it apart to repair all of the extensive cracks.  We had a friend who was foreman of the weld shop at McDonald Douglas in Long Beach. He worked on it for three days, 6 hours for each the first two days and 5 hours the third, seventeen total hours.   During the time he worked on it the only break he took was to ask for more” rod”.  Amos LaFont was a very intense and skilled welder, without him that car would probably have gone in a ditch somewhere and been  destroyed.  After that the frame, differential and miscellaneous pieces went to the powder coater.”

As for the body and paint, Les continued:

“The body went to a painter named “Stoney” at Randy’s Rainbow in Huntington Beach, California,  I never knew his full name, to prep and paint.  He worked on it for about a month, he painted it Ferrari Charuso Red. ” Cherry Red”.  It was gorgeous. I believe it still has the paint on it that Stoney used in the 80’s.”

Let’s take a look at Les and his crew fitting the body to the chassis back 30+ years ago: 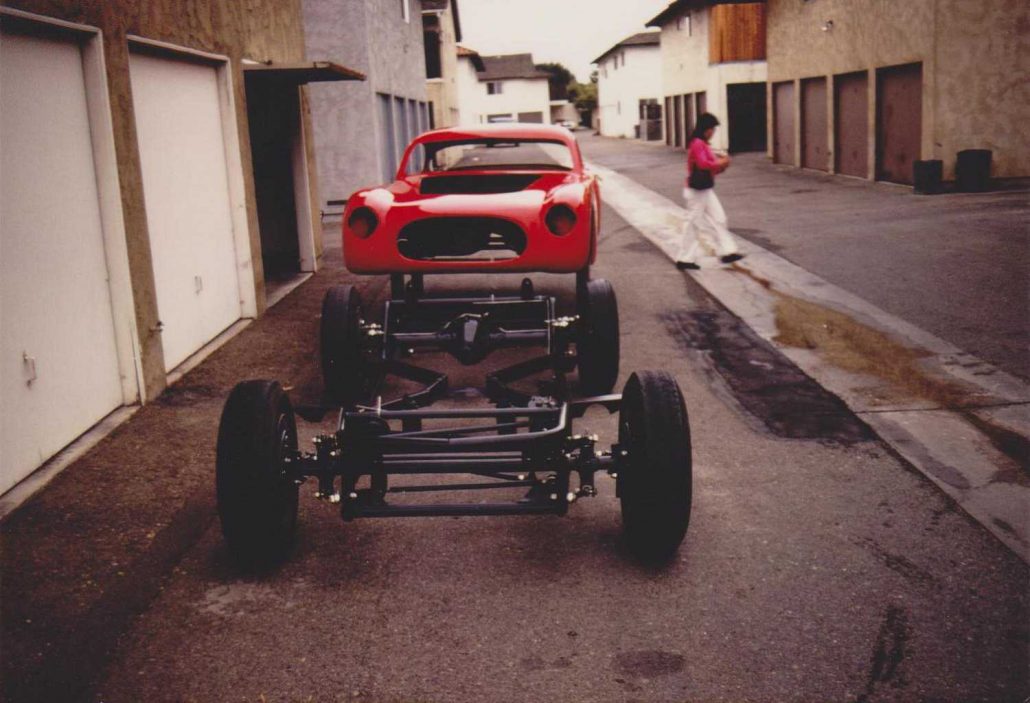 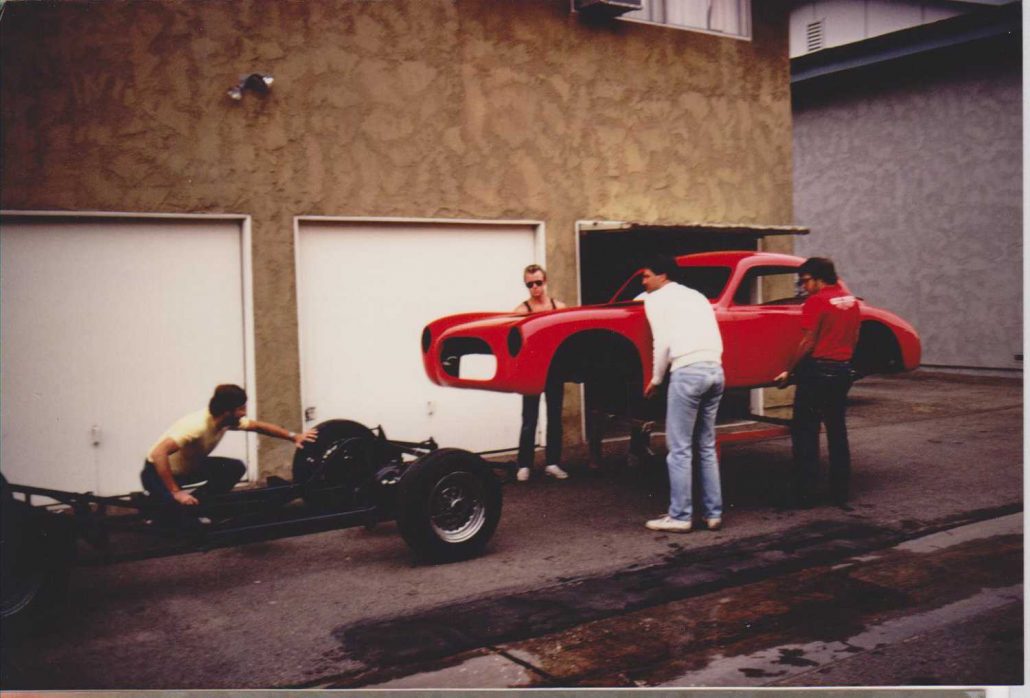 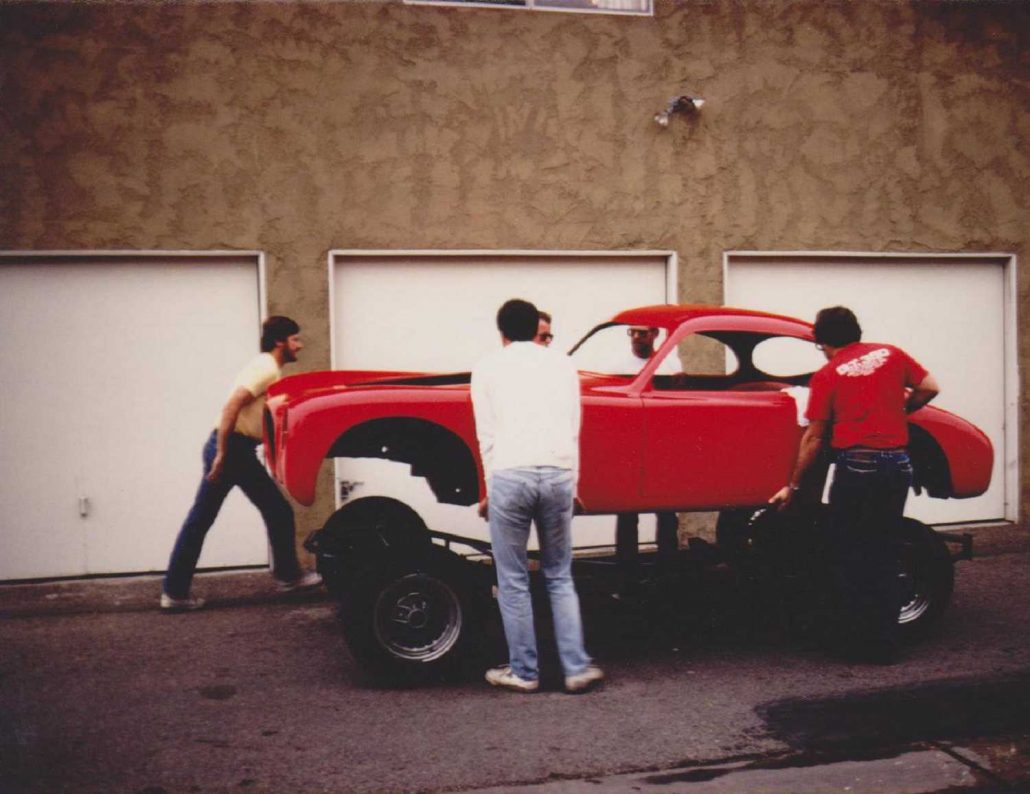 And some chassis photos too. 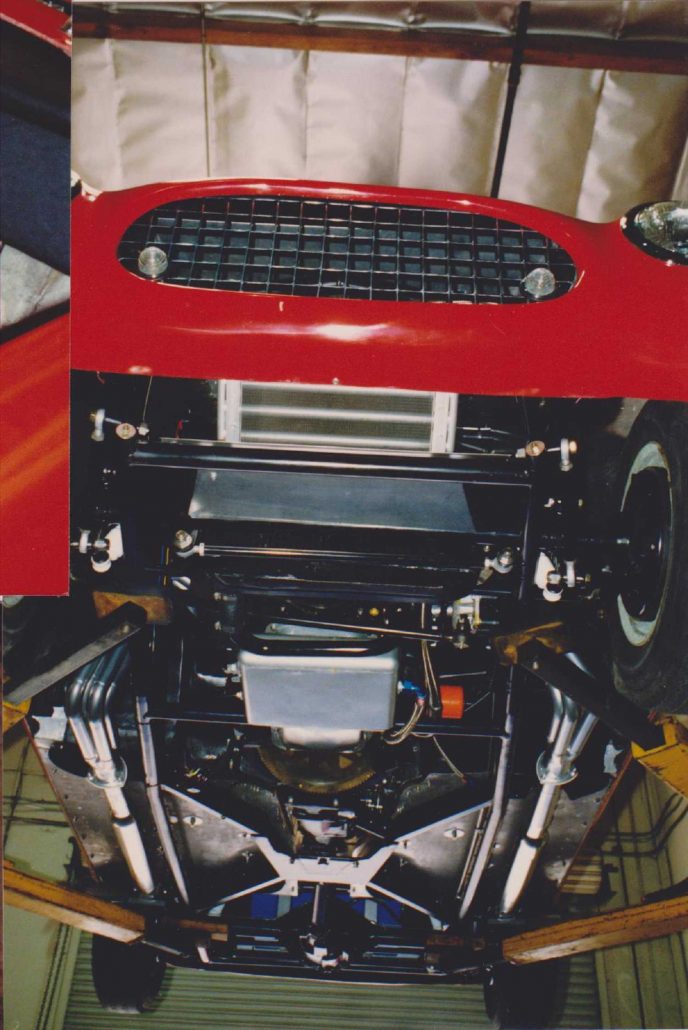 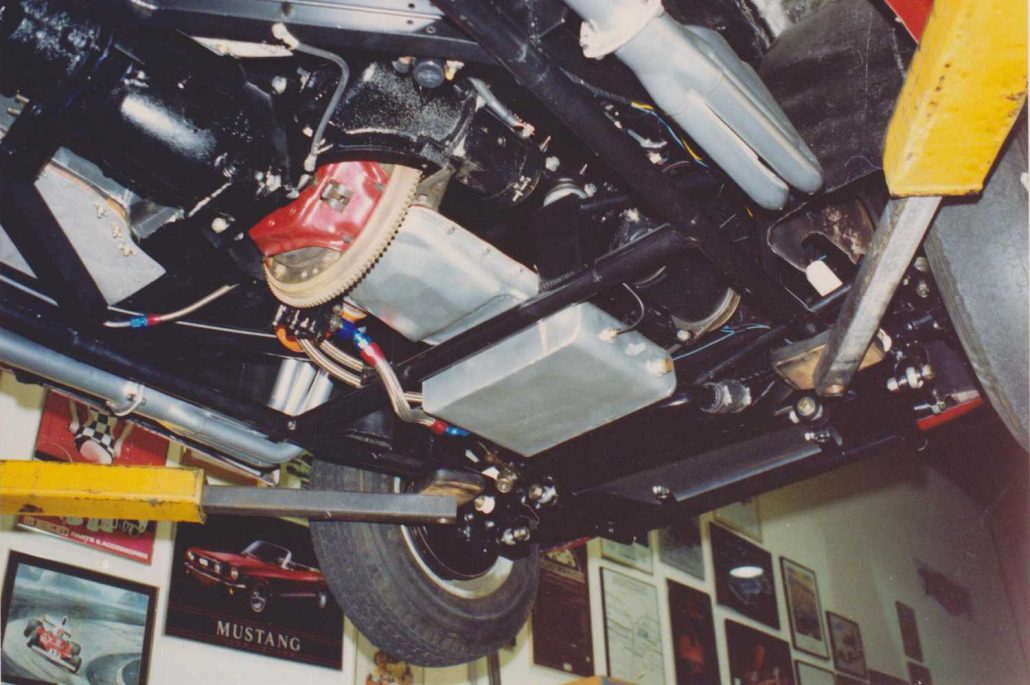 During the time Les was restoring his car, he continued with research too.  He visited Frank Kurtis and learned quite a bit about the Kurtis chassis and how it was used on his type of car.  Ht took copious notes during his visit with Frank and shared them with us too, but was disappointed with the results.  Les shared that Frank “kniew nothing about KK43 except that it had a Kurtis chassis.”

Les also became friends with Bill Stroppe who gave him advice on specific parts to use.  Les shared:

“I worked on it to restore it for a solid year almost everyday. I wanted to vintage race it and keep it as close to original as I could.  I used the original drum brakes, 2 inch Chevys on the front and 2 1/2 inch Cadillac on the rear, all with a set of linings from Italy that Bill Stroppe insisted I get, the same as the ones on his Kurtis.

I did ventilate the drums and added an air horn to cool the front.  I believe that at this point the drums are gone, along with the original steering wheel, Hurst shifter, Edmunds aluminum duel four barrel intake, two 1955 Buick down draft four barrel carburetors and 1955 Buick wire wheels just to mention a few.”

Les continued with his restoration of the Allied and noted some of the following changes he made:

Here are photos shared by Les that show the newly fabricated aluminum transmission tunnel, the Triumph TR3 parking lights installed in the grille, and the restored dual quad setup the engine still had in place when he owned the Allied Kurtis Blackhawk. 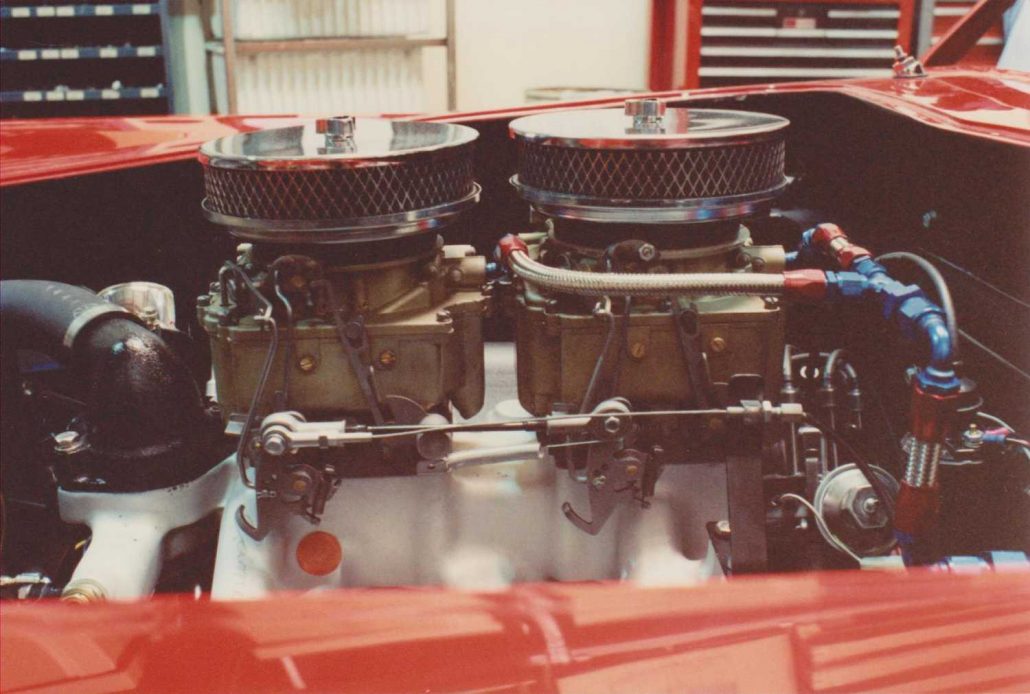 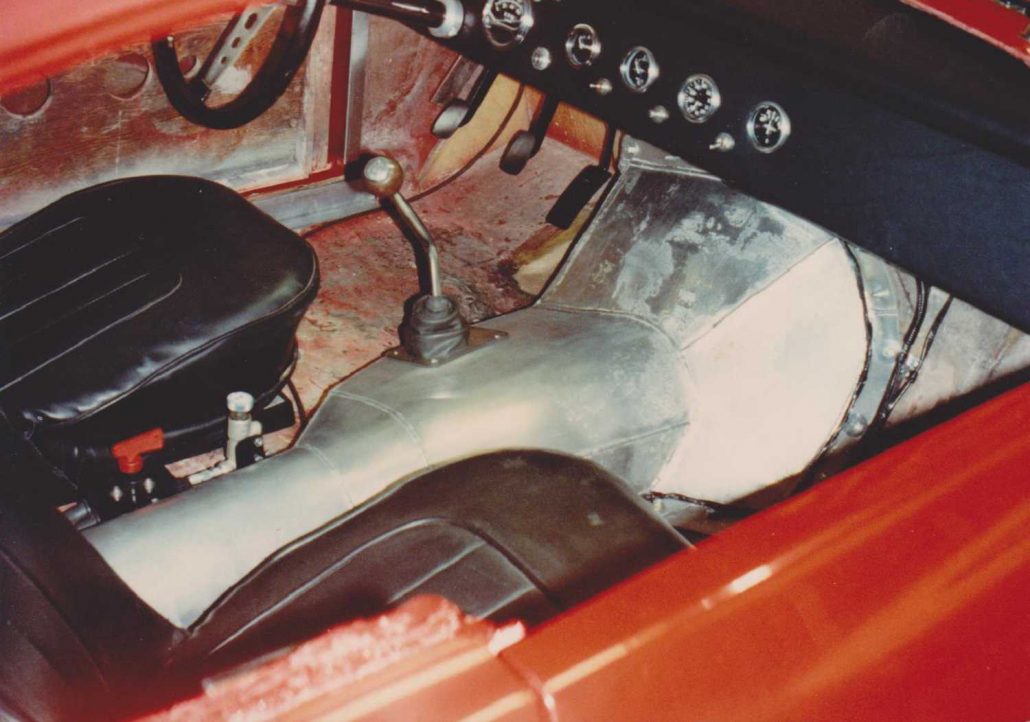 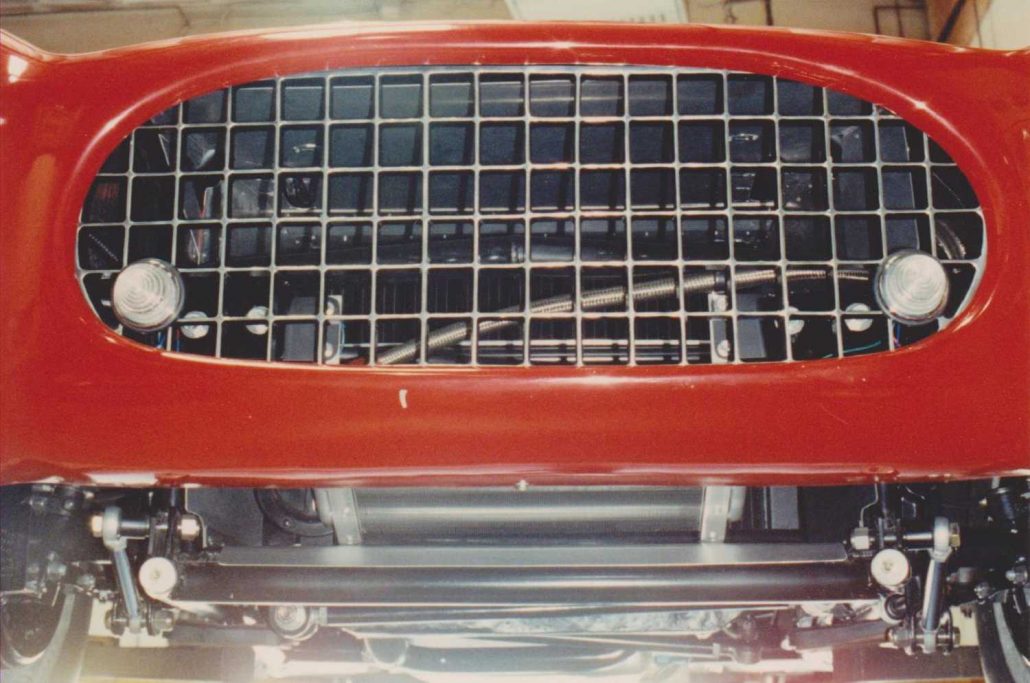 Les visited Frank Kurtis, Bill Stroppe, Bill Burke, Max Balchowski, Harold Daigh (Chuck’s brother), Joe Reath and many other people who were still around in the 1980s and knowledgeable about 50s racing history learning about his car and the history about it.  None could provide any information or any stories of Mickey and his building an Allied Kurtis race car.

I asked Les why he didn’t go to the source – Mickey Thompson himself.  Les said that Mickey was a pretty big name at the time and that he was a bit intimidated to track him down and talk to him about it.  I would have loved to hear directly what Mickey would have said about Allied and Atlas too.

And while Mickey Thompson’s name sometimes appeared with the name of the company “Allied and Atlas,” Les found no evidence and no history on his car or in talking with others which would indicate that Mickey Thompson specifically built his Allied Kurtis Blackhawk.  For those of you new to Allied and Atlas cars, click on the following article to learn more about the history of Atlas and Allied:

Les did find others who owned Allieds – several people shared that their car was built by Mickey Thompson.  Here’s one of these cars below.  Les shares,

“This is the car I saw north of Los Angeles – somewhere.  They claimed it had been Mickey’s car.  It had a flathead Ford and crisscross rail chassis.” 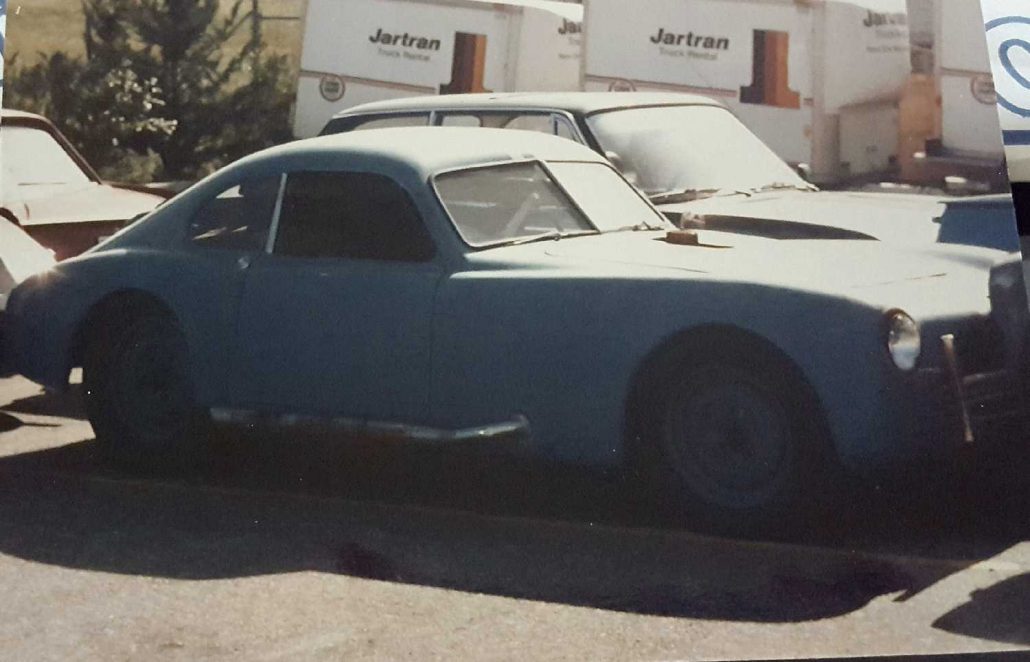 Les only drove the car two times during the 10 years he owned it.  He had nearly finished the restoration with just the windows needing installation and the final sorting needed to ensure the car was driving correctly.  Les continued to share:

It turned out that Les said that Robert had also bought another Allied Blackhawk with Kurtis chassis, and so this made “two” in Robert’s collection.  However, Les knew the previous owner of this second car, Stewart Wilson, had built this Allied with a “found” Kurtis chassis and an Allied Blackhawk body that had not been built into a car.  Stewart sold it to a person named Michael Sheehan who sold it to Robert Lamplough – as recounted by Les Zoller.

Les has a great memory of the car and his attention to details of what the car was and how he restored it is extraordinary.   As for the Allied Kurtis Blackhawk, he retained a few things of interest that I can share with you via photos below.  First, here’s the registration that he had for his Kurtis showing the date of registration (shortly after purchase) and the KK #43 too. 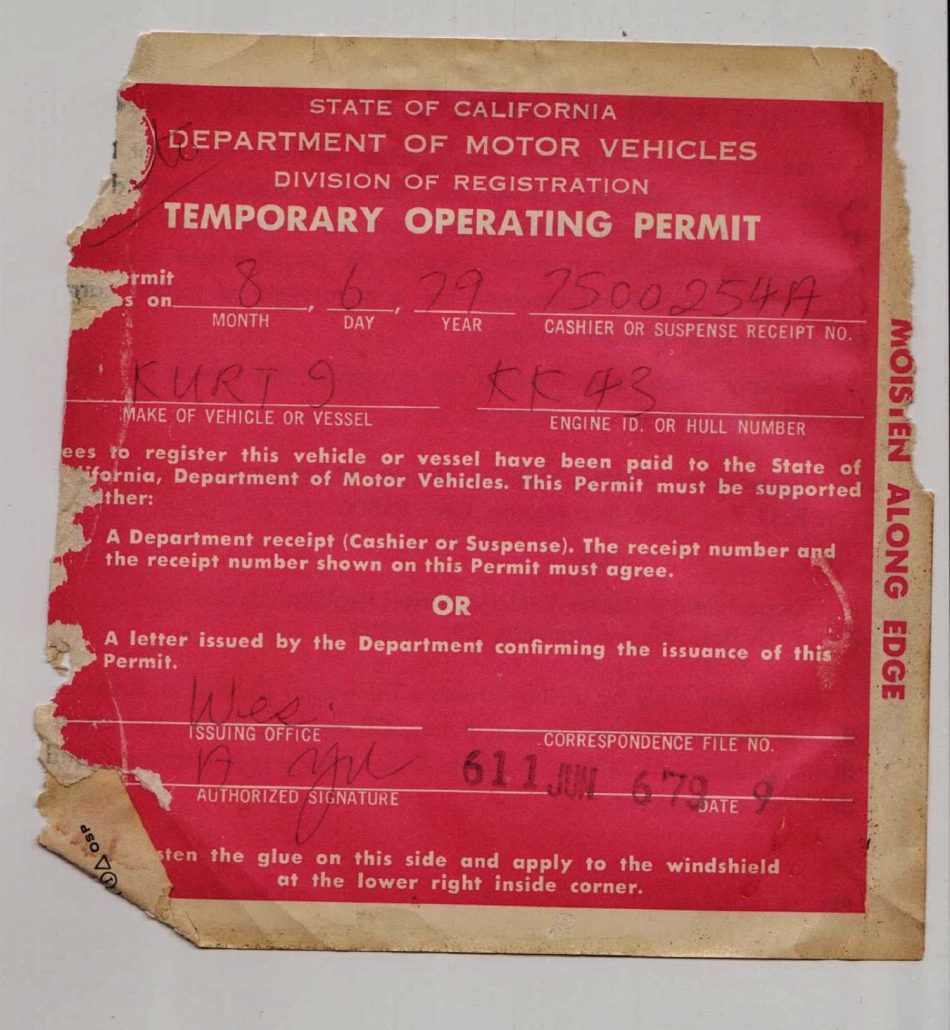 Les still has original Kurtis badges that he replaced with new ones purchased from Arlen Kurtis, and as you can see in the photos below, one of the posts is broken off just as he recounted in his story. 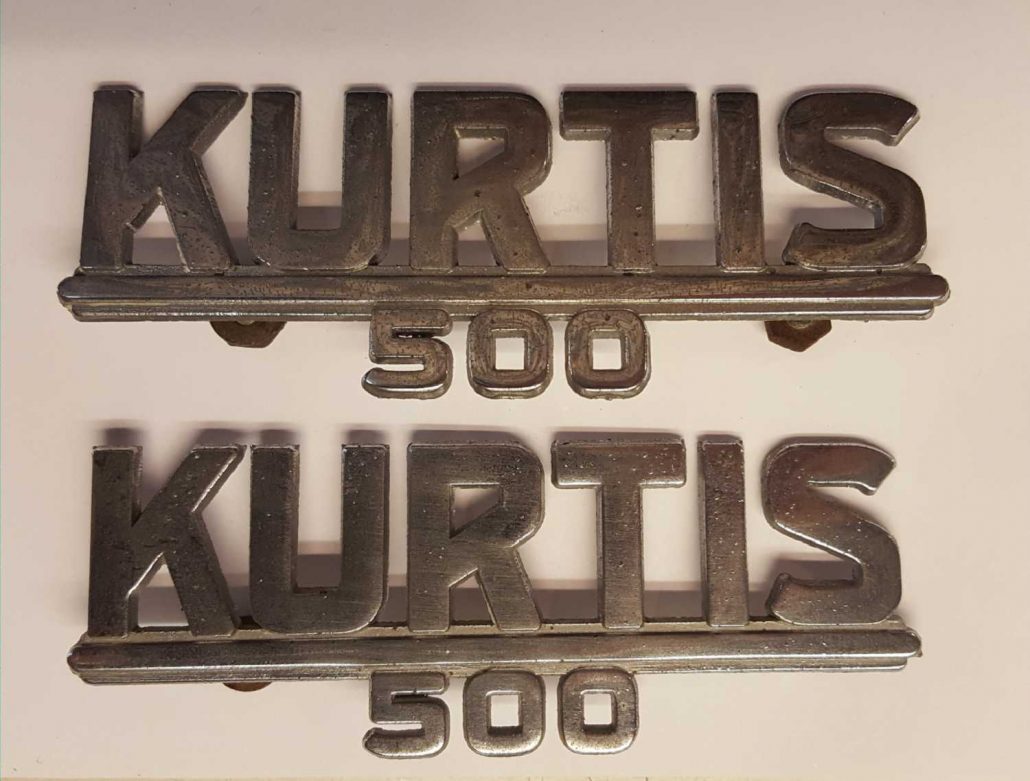 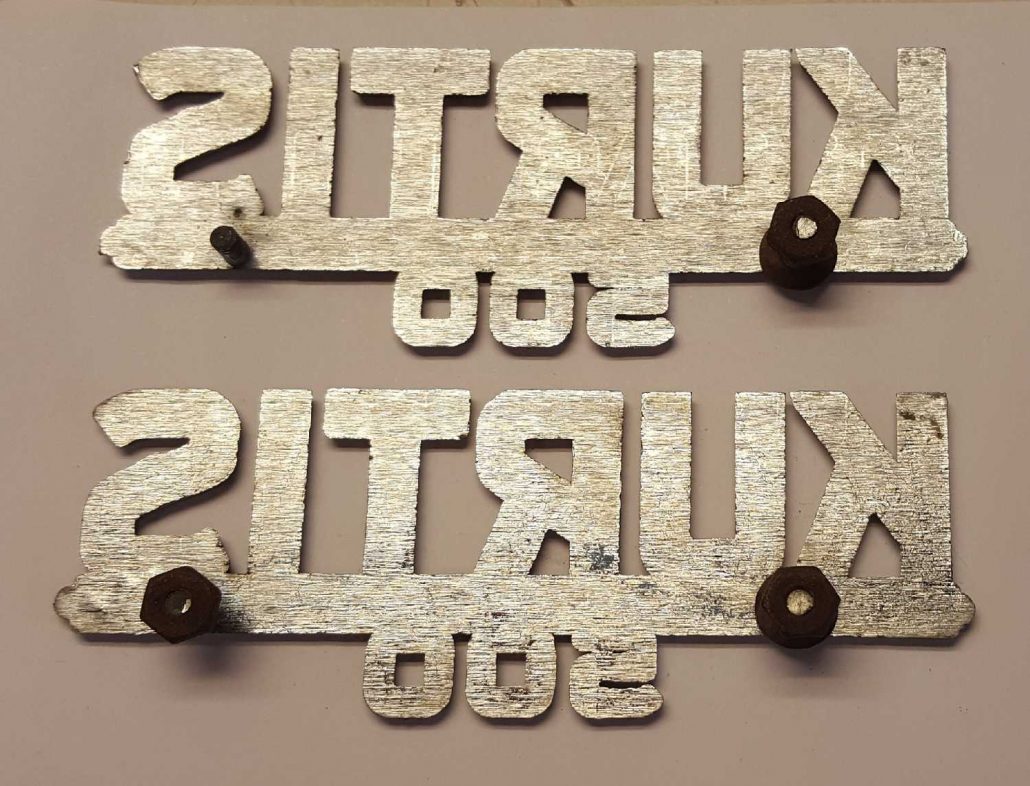 And finally Les retained the driver’s side rear window with its Kurtis sticker proudly displayed.  You can see this window in place in some of the vintage photos Les shared with us at the beginning of this story. 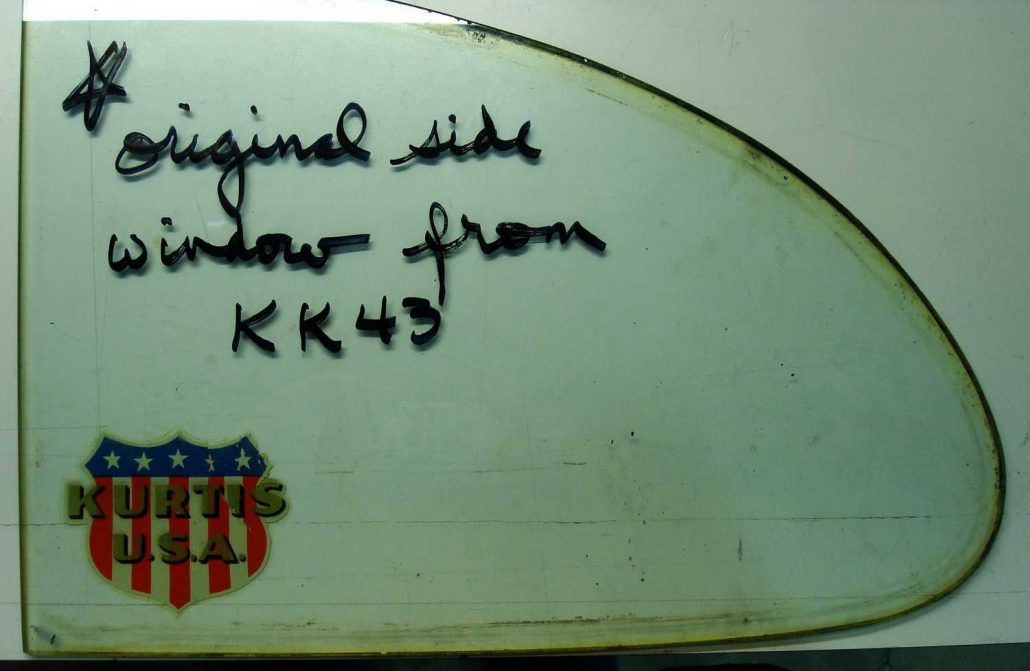 So what is 73 year old Les Zoller doing today?  He still lives in California and he’s now getting to the restoration of a car he has had since 1972 – a Shelby Mustang GT500KR – “King of the Road.”  Will wonders never cease.  Les sure has an excellent taste in sports cars.  Go get ’em Les!