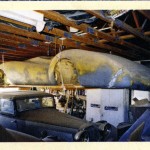 Here’s How Steve Originally Found The Victress S1A Body – It Was In Pristine Shape Even Though 50+ Years Old.

The new issue of “Hemmings Muscle Machines” for May 2011 is on the newsstands and I think every one of you fiberglass fanatics out there should run out and buy it.  Author and historian Daniel Strohl of Hemmings has done a superb job with the article, which talks about the history of Victress, Steve Steers, his family, and cars.

I’ve covered a bit about Steve’s car before on our website.  Click on the link below for additional information:

And Daniel Strohl also discussed additional detail about Steve, his father, and their cars in the following story on the Hemmings Blog:

Be sure to review both links above for additional information.  It will be worth your while 🙂 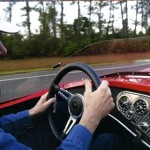 Here’s Steve At The Wheel Of His Victress S1A – A Man, His Car, and A Dream…

For today’s story, Daniel Strohl and Hemmings are allowing us to publish the first two pages of this six page article on Steve Steers and his Victress.  This is the most substantial story published about Victress and an S1A in over 50 years.

For those of you who can’t run out to the closest bookstore and purchase a copy of the magazine, you can click on the link below to visit website for “Hemmings Muscle Machines” and order a copy online:

I know that Daniel and Hemmings would appreciate the support in every way.

And…if you like the article, let Hemmings know.  The more they are aware of the growing interest in fiberglass sports cars, the more they will happily fulfill the wishes of their readers and publish more articles.  The time you take in letting them know will be appreciated by all.

So… without delay, here’s the first part of the Hemmings article: 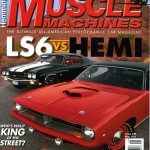 Today’s Article Appears in its Entirety in the May 2011 Issue of Hemmings “Muscule Machines” Magazine.

Hemmings Muscle Machines: (May, 2011)
The 58th Variety
By Daniel Strohl

On a simple frame of two-by-fours hung from the rafters of the Texas garage sat the fiberglass body he had come all the way from Illinois to see.  Apparently, nobody had ever finished it in the nearly fifty years since it popped from the mold.  One of the doors and the trunk lid even remained intact, uncut from the one-piece body.  This was as close a starting point as he could share with his father, his inspiration and motivation.

“Because of Pop, I always knew about fiberglass-bodied sports cars growing up, and I’ve always been enamored and interested in them,” Steve said.  John Steers, like many backyard tinkerers and builders of the 1950s who were both in love with the European sports cars streaming into the United States and frustrated at the lack of a decent response from Detroit, believed he could build a car that could outperform them all without breaking the bank.

His first attempt, in the  late 1940s, used the basic chassis of a Ford Model A, but with the seat just behind the front axle, the engine in the back and a body made of doped fabric.  In 1954, he began work on a second car with a homebuilt tube frame that mounted 1937 Ford running gear, a flathead Ford 8 engine and a custom-molded fiberglass body.  He built a Mercury flathead V8 powered Glasspar G2 that proved successful in SCCA C/Modified racing in Northern California.

Steve recalls that his father liked to race the Glasspar with the number 57, alluding to Heinz’s “57 Varieties” slogan and the parts from nearly as many cars that went into the construction of the Glasspar.

Be sure to read “the rest of the story” in the May 2011 Hemmings “Muscle Machines” Magazine.

Thanks again to Daniel Strohl and Hemmings Magazine for allowing us to share a part of their article this month – be sure to pick up a copy on the newstand today.

Today’s Article Appears in its Entirety in the May 2011 Issue of Hemmings “Muscule Machines” Magazine. 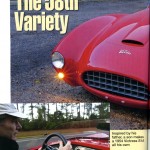 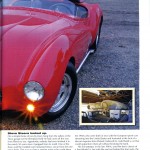 Here’s Steve At The Wheel Of His Victress S1A – A Man, His Car, and A Dream…

Here’s How Steve Originally Found The Victress S1A Body – It Was In Pristine Shape Even Though 50+ Years Old. 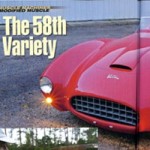