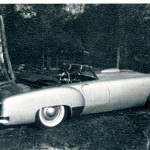 This Car Was Built By Theodore A. Ongena of Lapeer, Michigan. This Is One Beautiful Design. I Wonder Where The Car Is Today?

I’m a voracious reader.  Or collector of magazines.  Maybe both.

I love the old Road and Track Magazines, Hot Rod, and even the obscure ones like “Hop Up” and “Auto Speed and Sport.”  That’s where the cool articles are found.

So…it shouldn’t surprise you that I’ve been on the hunt for even more rare magazines and one of the stashes of magazines I was recently able to purchase was a large collection of “Ford Times” from 1950-1955.  Boy did I hit the jackpot!  Not only was the original article about the “Gazelle Sports Car” there, but so were 3 new Glasspar G2’s and another car called a US Mark II.

Ford Times started back in the 1930’s, but was officially launched (perhaps again) in 1944.  I’ve been collecting issues of this magazine for years, and this was the Ford “in-house” magazine for their dealers and subscribers.  GM had a similar magazine called “GM Folks,” and I believe Oldsmobile and other marques (Lincoln Mercury, for example) had their own too.  I’m still researching and collecting, so I’ll hopefully have the answer in the next few years. 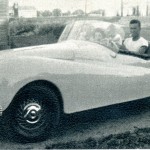 I Like This Car Too – Built By Curtis W. Thomas of Arlington, South Dakota. If You Look Closely, You Can See His Wife (Assumed) And Two Kids In The Car.

Since the 1940’s, Ford Times often contained a section called “Custom Conversions.”  These were wonderful short articles about nicely built cars that used Ford components.  In a way, Ford Times captured the early history of custom car and sports car building like no one else.  Or at least differently than everyone else.

Today’s article shows just one picture and a bit of detail about a Glasspar G2 built in St. Joseph, Missouri.  Perhaps one of you Glasspar owners out there can match some of the characteristics of your car to this one (hint hint Alan Mortlock, Dennis Gerdes, Tom Chandler, and others of you who found your Glasspar G2’s out in the Midwest.

You never know what research will reveal.

Dealers Building Their Own Sports Cars??? 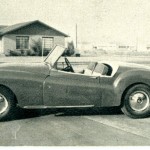 This Sports Car Was Built By Garner Jones of Lamesa, Texas. Nicely Designed and Built Too.

Although the article in Ford Times is very short, it points out an interesting facet to building your own sports car in the early 1950’s.  It wasn’t just being done by the enthusiasts.  It was also completed by full-blown race car shops, and even several new car dealerships.  As you’ll find out in more stories on the Gazelle / Navajo Sports Car, this was a car being promoted from two owners of a Ford dealership in New York City.

So was the first Glasspar G2 bodied “Morgensen Special” built by Arizona Dealer Dick Morgensen.  And other dealers built their own sports cars too.  Remember Woody Woodill?  His father had a Dodge dealership, and he owned a Willys dealership.  Kjell Qvale of BMC Motors is another, so this was not a rare thing to see.  This was something that smart entrepreneurs of the day were trying, and they wanted to be part of the burgeoning sports car revolution in America.

So….it’s with interest today, that I present to you another Glasspar G2 sports car built by a Ford Dealership.  This one was built by “Modern Motors” of St. Joseph, Missouri.  I checked and it seems this dealership is no longer around, but that doesn’t mean that it wasn’t merged with an existing dealership.  Perhaps one of you in the St.  Joseph, Missouri area might do a bit of scouting around the dealerships there.  You never know…. you might find the original build pictures and the history of the Glasspar G2 shown in this story.  Maybe the car itself.

That’s how Rick D’Louhy and I have found some pretty neat things gang.  And we welcome and encourage all the research each of you might do.   Keep us posted on what you find 🙂

“Do It Yourself” Boys Build Roadsters
By Burgess H. Scott 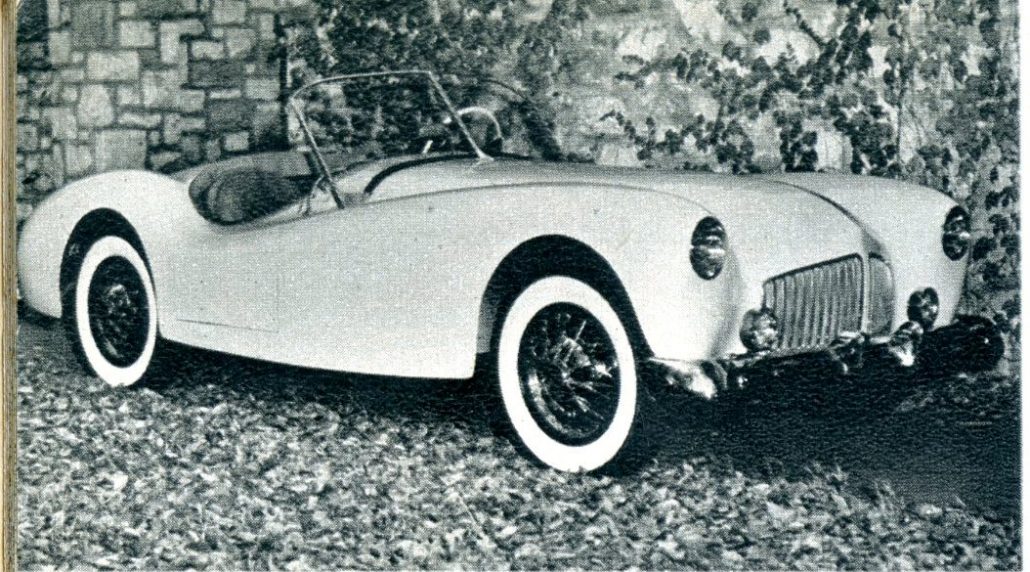 Here’s The Glasspar G2 Built By Modern Motors of St. Joseph, Missouri. I Like The Added Fog Lights Up Front – A Nice Detail. Where This Is Beauty Today???

The growing popularity of roadsters and sports cars is reflected in the examples of amateur car restyling that come to the attention of this department.  These photographs show four cars from as many widely separated states that exhibit this trend.

The car above (Glasspar G2) was assembled at Modern Motors, the Ford dealership in St. Joseph, Missouri, from standard Ford or Mercury parts with the exception of the glass fiber body which was supplied by a California firm.  The Mercury engine is speed equipped; wheelbase is 101 inches with an overall length of 159 inches, and top speed is estimated at 140 mph.

Since the articles that appear in Ford Times are fairly short, I think it might be fun to start including all the text and pictures so you can see the context of the entire article.  I’ll also create a new category in our website called “Ford Times” so you can easily pull up all these cool “Custom Conversion” articles at one time.  So…as promised….the article continues:

Theodore A. Onegena of Lapeer, Michigan built the car at lower left on a 1939 Ford chassis, using parts from eleven different makes in its construction.  The engine is a 1946 Ford re-bored to .080 with 8 to 1 compression ratio heads.  Cowl height is 36 inches and the highest point with top up is 40 inches.

Curtis W. Thomas built the car above in Arlington, South Dakota, from a 1940 Ford convertible.  The chassis and engine are stock and the fender fairing and additional body panels were hand-formed from 18 gauge sheet steel.  The car is upholstered in gray and red leatherette.

A wrecked 1951 Ford with overdrive was the basis for the car below, built by Garner Jones of Lamesa, Texas.  The wheelbase was shortened to 100 inches and the body was built from parts of several makes of cars.  The top lets down behind the seats. 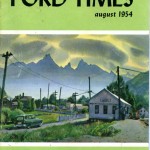 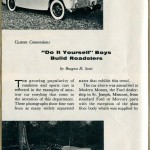 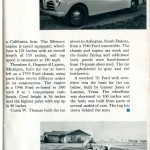 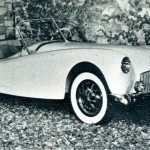 This Car Was Built By Theodore A. Ongena of Lapeer, Michigan. This Is One Beautiful Design. I Wonder Where The Car Is Today?

I Like This Car Too – Built By Curtis W. Thomas of Arlington, South Dakota. If You Look Closely, You Can See His Wife (Assumed) And Two Kids In The Car.

This Sports Car Was Built By Garner Jones of Lamesa, Texas. Nicely Designed and Built Too. 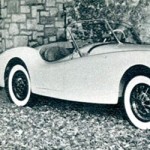