When’s the last time you visited a Smorgasbord?  I grew up in the ‘60s and it became a word our family used quite a bit.  These were the first “buffets” that I can remember and this is exactly what the article is today as titled when it accurately described the 1952 Petersen Motorama – an “Automotive Smorgasbord.”

We’re still compiling a full list of cars that appeared at the show, but in this article alone are shown the ’52 “Darrin Sports car” – before it was called the “Kaiser Darrin.”  Also appearing were Vale Wright’s “Vale Sports Car” and Lloyd Templeton’s “Saturn Sports Custom” – and a host of other fiberglass sports cars.  After all, 1952-1953 was the sweet spot of vintage fiberglass car creation – the golden era that launched of our “favorite forgotten fiberglass fantastic fabrications.”

Let’s have a look what Auto Sport Review had to say about the Petersen Motorama which was held in November 1952:

That gigantic automotive smorgasbord, the third International Motorama, has been displayed again in Los Angeles with all its bewildering array of hot rods, custom cars, track models, American, British, German and Italian luxury creations, “experimental” vehicles and potent sports and road-racing cars from all over the world.

And served up with this, of course, was a tempting battery of side-dishes: automotive accessories, driving aids, “customizing” equipment, carburetors, wheels, tires, speed equipment – and a whole rainbow of special paint jobs.

The usual multi-thousands of spectators eddied slowly through this glittering confusion for the seven days the show was open (November 10 through 16, 1952) and, at times, you literally couldn’t see the cars for the customers. 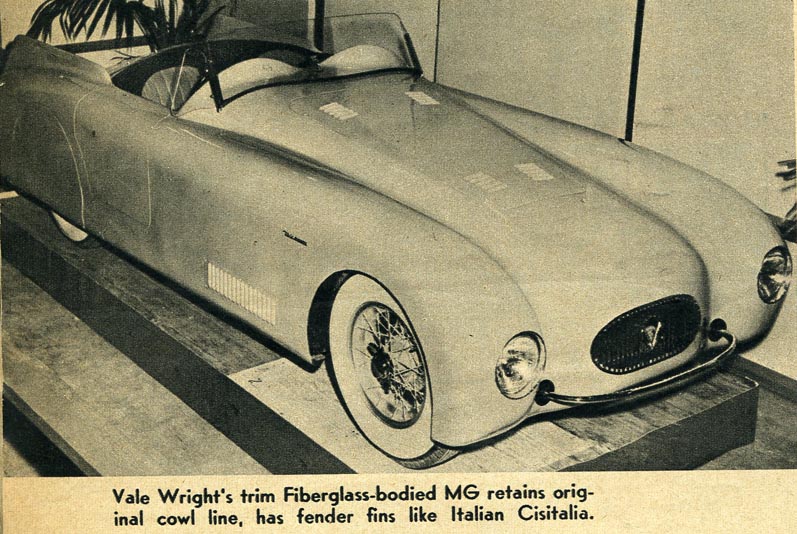 The hot rod section was dominated by such entries as the Hill and Davis “City of Burbank” streamliner, international Class C record-holder at 229 mph, and the Brown and Hooper Class C Lakester.  This car, claimed to be the fastest open-wheeled job in the world at 197.88 mph average, has an aircraft belly tank body, modified Ford running gear and is powered by a new Chrysler V8 engine.

This engine has been destroked and sleeved down from its stock 331 cubic inches to 304 cubic inches so as to qualify for Class C.  A widely-discussed roadster entry in the Motorama featured a 425 cubic inch supercharged Ranger aircraft engine.  The supercharger is mounted ahead of the engine and has four carburetors.

This car, owned by Taylor and Horne, clocked 142.57 mph at Bonneville Salt Flats last September and has done 112.53 in the standing quarter mile.  The featured automobile of the show was the Packard “Pan American.”  This car bears a strong family resemblance to the stock Packards in grille and hood treatment but the fittings and appointments are far superior to the production line products and, of course, it is longer than the Queen Mary.

The body work, by Henney, is a fine example of why that firm gets most of Packard’s special assignments.  Though not a true sports car in any sense of the word, the “Pan-American” does have wire wheels, though not of the knock-off variety, and their sparkling chrome spokes add a certain Continental flair.

A top entry in the custom sports car array was the Darrin K-FXP (which apparently translates as the “Kaiser-Frazer Experimental”).  It is a beautiful automobile and has a fiberglass body on a stock Henry J chassis, with stock Henry J engine, and weighs some 200 pounds.

One detail on this vehicle was a real crowd-stopper: its sliding doors.  The doors slide forward into the front fender wells, not only permitting easy and unobstructed entry, but also allowing the designer to set the windshield post closer to the cockpit.

This is The 1952 Darrin Sports Car – It Debuted At The ’52 Petersen Motorama.

The custom cars illustrated the amazing styling differences existing between the east and west here in the United States.  The eastern cars favored extremely futuristic body contours and their lavish use of chrome trim was reminiscent of the extravagant French styling of Saouchik.

The westerners, on the other hand, seemed to favor smooth contours and little or no chrome, reminding one of the Italian school of simplicity in styling.  Race cars present at Motorama were the Cummins Diesel Special that qualified at 138.010 mph to take the pole at the 1952 Indianapolis race and the 4 and ½ litre Grand Prix Ferrari brought to the country by Gerry Grant.

Sports cars of many types were represented;  The British Allard, Jaguar, Alvis, Singer, MG and others (plus such dignified carriages as Rolls Royce and Bentley); the Italian Ferrari, Osca, Siata, Cisitalia and Fiat, and the  German Mercedes-Benz and Porsche.

There was even a Russian example – a Pobeda.  Very “American” in appearance, like most Russian domestic cars, it didn’t seem at all out of place – in fact, it seemed to follow the Detroit “line” in every contour.

To be a fly on the wall with a modern video camera at the Pan Pacific Auditorium back in 1952….if only that were possible.  For those of you interested, check out other stories here on Forgotten Fiberglass on the Petersen Motorama by clicking on the links below. 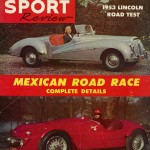 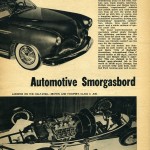 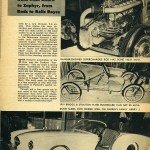 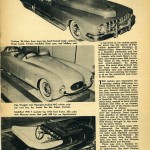 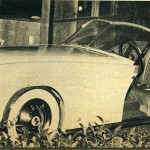 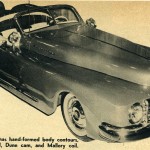 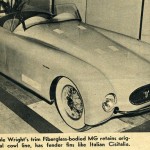 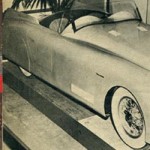