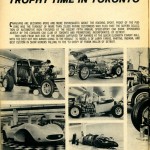 What a Surprise When I Saw The Article Tony St. Clair Posted in our Forgotten Fiberglass Forums. Thanks to Erich Schultz For Pointing Out What I Missed. I Need to Update My Eyeglass Prescription!

Note: 4/3/2011:  Great news gang.  One of the folks who built this car – Mike Budniewski of Buffalo, New York, contacted me recently and gave me additional detail concerning this car.  He was 14 years old when his teacher, Henry Martin Steiger (this is the correct spelling vs the spelling in the article and magazine below) of Buffalo New York, built two bodies and two cars.  One was Volvo powered and one was Austin powered.   I’m in the process of locating the original family in hopes of learning more about this car(s), how they were built, and honoring the person (people) who built it – Henry Steiger.  Stay tuned for more detail.  Geoff

Lots of people are involved in the story of this car – just no sign of the owner or builder yet.  Perhaps that will change with this article.  You never know….

Guy Dirkin is no stranger to rare and unusual cars.  After all, he has restored his Byers SR100 and a beautiful Kellison sports car too.  Now…. he’s knee deep into the restoration of his Victress – the Lost Motor Trend Victress Special.  Click on the following links to read more about Guy’s cars (note to Guy:  We need to do a story on your Kellison!):

So….I wasn’t surprised to hear from Guy several years ago when he found another mystery car – a small one that would have originally been bodied on an 88” wheelbase car.  Pretty neat.  He sent Jon Greuel and me pictures, and we posted them on our website, but no one could identify the intriguing little car.  It even had an early 1960’s license plate so it must have seen some drive time in the past.

It was a very stylish little special.  But what could it be?  Enter Tony St. Clair. 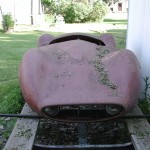 What A Nicely Designed Body. And it Won First Place in the Speed-Sport Show in Toronto, Canada in 1964.

Tony is a researcher and scholar in terms of how he approaches history.  He shares my passion for old automotive magazines and I think half of my collection probably was purchased over the years from him and his significant other, Kate.  He’s the “Go-To” guy in terms of documented history – and the restoration of vintage dashboard gauges too.  But that’s another story.

Back on April 18th, 2010 Tony posted the following article in our “Fiberglass Forums” under “Mystery Cars”:

In an e-mail to me in late 2010, Erich pointed out Tony’s post above and said, “Isn’t that the car Guy found, Geoff?”

I hope this happens more often 🙂 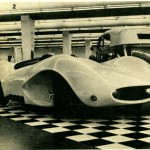 Here’s a Close-Up Of the Picture Shown in the August 1964 Issue of Cars Magazine.

According to the article, this was quite a big show in Toronto, Canada at the time.  Here’s how the article opened:

“Canadians are becoming more and more enthusiastic about the rodding sport.  Proof of the pudding was the turnout of more than 25,000 paying customers who filed past the superb collection of automotive iron featured at the recent Fifth Annual Speed-Sport Car Show, sponsored by the Corsairs Car Club of Toronto and Promotions, Incorporated of Detroit.”

The article provided a bit of information about the car.  Here’s what it said:

Ok….I’m intrigued.  It’s a bit newer than I’m used to – 1964 – but it most likely was started in earlier years.  It’s attractive in design and unusual in terms of choice of chassis and drivetrain.  So what else is known about this car?  Additional details are apparent as you inspect the picture in the magazine.  It had some interesting knock-off wheels – that’s the strange object that appears in the wheel well in the center of the tire (I couldn’t figure it out at first).

And there might be some type of “side-pipe” on the passenger side – I’m still not sure what this is, and the state of the current body doesn’t reveal new information either.  There are “snaps” around the cockpit of the body currently – suggesting a tonneau cover.  This certainly was a driver sometime in the distant past.

Also, there is another possibility.  The car Guy found may be another body from the same mold.  No doubt it’s the same body style – but perhaps they made more than one.  That’s the fun thing, I guess, about mysteries….  So far….nothing more that I can find.  But what Tony found and Eric identified was a great start. 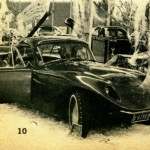 I Like the Front End of This Car That Appeared in the Same Show Too. It Was Called the “Bandito” – a 1958 MGA Rebuilt From a Total Wreck by Sven Krauman of Coubourg Canada. It Had a Custom Fiberglass Front End.

H.M. Striger of Buffalo New York – Where Are You?

I’m currently on the trail of the “Speed Sports Show” in Canada.  I’ve found a show of the same name in Canada that has a 35+ year history – but it is several hundred miles from Toronto, Canada.  I hope to be able to locate more precise information soon.  As for the “Corsairs Car Club (CDN),” it appears to be no more.

I have a lead on “Promotions, Inc” of Detroit.  I believe that may be Bob Larivee who founded and has run some of the most significant car shows since the late 1950’s.  I’ve worked with Bob before on researching the history of the Petersen Motoramas, and he’s quite the gentleman in terms of assistance.  I hope to find out more – in the next few days.

But the biggest mystery is where is H. M. Striger?  I’ve tried looking for this name in and around Buffalo New York and expanding across the country – no luck.  I’ve tried variations of this name like “Stringer” – still no luck.  So….some of you aficionados out there might have known him – especially if he were a sports car guy in and around Buffalo New York.  Any takers out there gang?  Time will tell.

So…. hopefully we’ll find someone who knows more about this car, H. M. Striger, or both.  And maybe I’ll find some key information from the Speed-Sport Team or Bob Larivee.  Anyway, this has been a fun road to travel, and I have many people to thank along the way on this journey which includes Guy Dirkin, Tony St. Clair, and Erich Schultz.

Thanks guys for a wild ride.  Let’s see where this story takes us!  It’s the journey right? 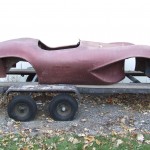 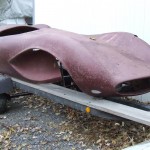 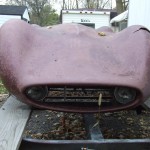 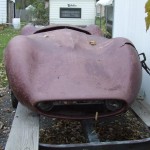 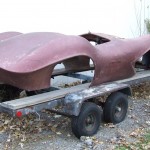 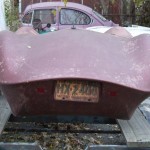 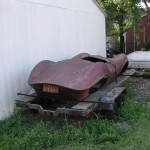 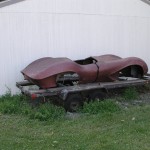 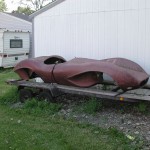 What A Nicely Designed Body. And it Won First Place in the Speed-Sport Show in Toronto, Canada in 1964. 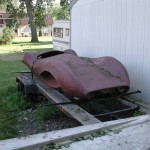 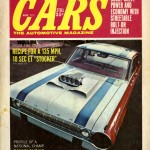 What a Surprise When I Saw The Article Tony St. Clair Posted in our Forgotten Fiberglass Forums. Thanks to Erich Schultz For Pointing Out What I Missed. I Need to Update My Eyeglass Prescription! 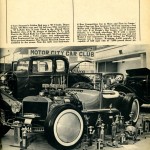 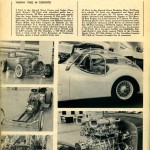 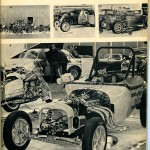 Here’s a Close-Up Of the Picture Shown in the August 1964 Issue of Cars Magazine.

I Like the Front End of This Car That Appeared in the Same Show Too. It Was Called the “Bandito” – a 1958 MGA Rebuilt From a Total Wreck by Sven Krauman of Coubourg Canada. It Had a Custom Fiberglass Front End. 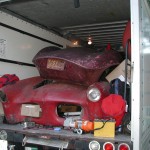 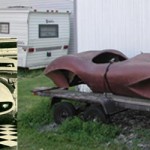