This car has always fascinated me for the history on why it was built, who designed it, and the fact it was actually finished and is now restored.  It’s an amazing story of two people – Reverend Alfred Juliano who designed and built it and Andy Saunders of the UK who found it and restored it – my kind of people!

The article talks about its debut as a “work in progress” and how people reacted to it back in 1956 when it was first seen.  In future stories here at Forgotten Fiberglass, we’ll feature the Aurora in its finished form too.

When a Catholic priest enrolls at Yale University, that’s not too surprising.  But when the same priest designs and builds a production model dream car, that’s news!  Yet this is just what the Reverend Alfred A. Juliano, of the Holy Ghost Fathers in Connecticut, has recently done.  His car is called the Aurora, which means “the dawn,” and it may be the dawn of a new era of custom automobiles.

The Aurora is full-scale, 18 foot automobile, built out of fiberglass, with a 360 degree clear top.  The buyer takes his pick of engines and interior appointments, but he gets an awful lot of new innovations as standard equipment.  Built in air-conditioning, retractable shock-absorbing bumpers, telescoping steering column, front-mounted spare tire, built-in hydraulic jacks – all these are engineered into the car’s basic design.

Only just put into production, the Aurora is first being supplied to various individuals who ordered it after the model’s first showing at the Hartford Armory.  But anybody else will soon be able to buy one – anyone with a minimum of $12,000, that is.

Only one Aurora was ever built (shown restored above) and the story on how it was found and restored is for another day here at Forgotten Fiberglass. 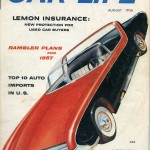 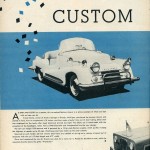 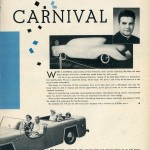 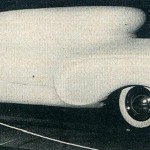 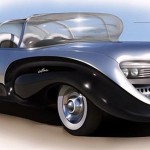