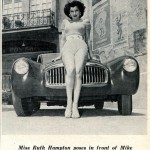 We’re getting “two-for-one” with this article today.  At first, I thought it was just a great article about the building of Mike Ricker’s Nash “grilled” Glasspar G2.  But then….I read started reading it.  Instead, what I found was an early history of fiberglass cars in California – in additon the Ricker G2 story.  And….look who wrote the article and took the pictures – Dean Moon – the guy who started “Mooneyes” or “Moon Speed Parts.”

Like I’ve said many times gang….these were famous cars back then.  Written about by famous people.  Driven by famous drivers, and built by famous fabricators.  Fiberglass sports cars were the “Rock Stars” of their era.  And few people today realize this.  It’s simply amazing to me that such a special story has been virtually forgotten in today’s times.  We aim to change that together here at Forgotten Fiberglass – right gang???

So…let’s see why I was so excited to share this article today.  And now for the story….

Shortly after the cessation of World War II, word began going around praising the qualities of fiberglass and its adaptability to practically any shape or size.  Racing boat owners discovered that the stuff, when properly applied to a hull, added strength without a great deal of unnecessary weight. 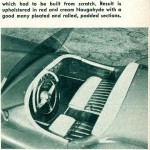 Hull bottoms, especially, take such a pounding that the wood screws often work loose with, sometimes, nasty results.  A few layers of glass cloth stopped all of this.  Auto enthusiasts, often taking a dim view of anyone who would associate with water sports, were quick to realize the possibilities of this light, yet strong, material.

Experimentation began and soon strange appearing cars were emerging from home workshops and from behind the closed doors of garages, basements, and so forth.

The race for quantity production was on and it was deemed only a matter of time before one or more of our auto manufacturers would announce a successful plastic bodied car.  As we all know, it took time before the Big Three stated publicly that they were interested in spun glass and Chevrolet ultimately beat the field with their announcement of the Corvette in the 1953 Motorama.

Going back a few years preceding the introduction of the Corvette, we all remember seeing announcement after announcement that so and so was soon to have fiberglass bodies for quantity sales.  How few  actually reached ultimate success is proof of the difficulties involved in construction.

The Glasspar Company of Southern California was one of the first firms to attain an output of any volume.  Their familiar style is becoming known in all parts of the country as they scoot hither and yon, still causing raised eyebrows and envious stares – a tribute to the clean styling and advanced design.

Mike Ricker, of Whittier, California, had his eye on Glasspar bodies for a long time before he seriously considered buying one.  Being the owner of a Nash agency, Ricker pondered the plausibility of using Nash-built components for the chassis.  To further complicate matters, he convinced himself that the finished project must bear certain Nash styling traits – a difficult problem since Glasspar bodies are built to only one size and shape. 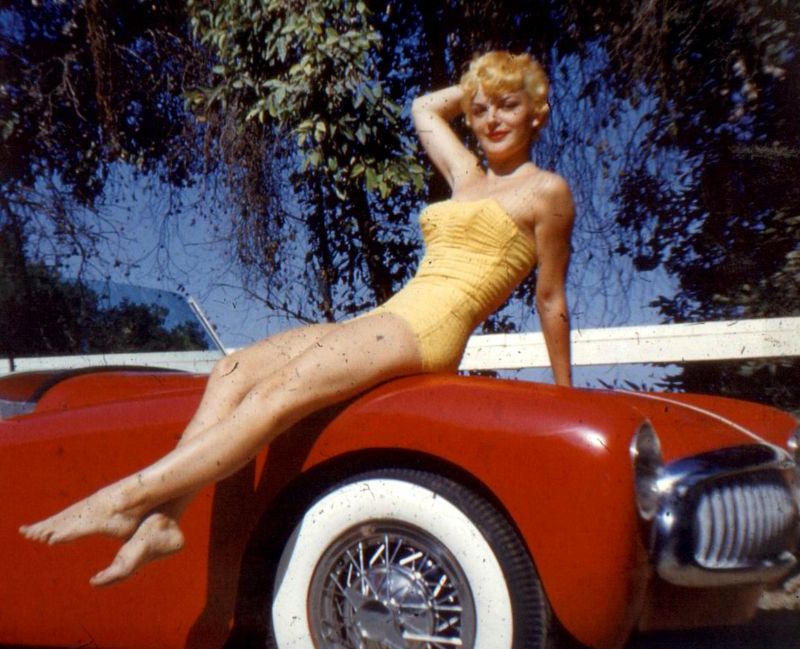 At last he settled for a ’51 Nash grille and asked the Glasspar people if this was easily adaptable to their frontal styling.  The answer was, fortunately, yes, and Ricker found himself the proud owner of a Fiberglass body complete with the necessary fittings.

As soon as the body had been delivered to the agency, Ricker began scouting around for chassis parts.  His used car lot offered a possible solution.  Someone had traded a wrecked Ford for a new Nash and the agency had eventually decided that there was little to be gained from rebuilding the old ’41 model.

Unhappy at the prospect of using Ford parts for his sports car-to-be, Ricker nevertheless arranged to have the junker disassembled.  Still determined to have Nash parts in the car, Ricker ordered a Nash Healey engine.  Work began in earnest and Ricker toiled long and hard mounting the suspension units onto the special frame he purchased from the Post Body Works in Orange, California, and transferring measurements from the body to the chassis. 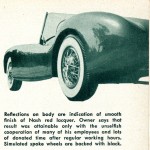 Employees of the agency were a long time getting used to having such an industrious employer working among them, and it took them longer still to become accustomed to seeing disassembled Ford parts scattered around the establishment.

One day, Ricker received an anonymous tip from the agency’s suggestion box.  It suggested the use of a particular part on the car instead of the one Ricker had planned.  The unsigned note was obviously from an interested individual who was apparently a little dubious about joining in the building process but who, however, had some worthwhile ideas.

Soon another not appeared, then they began arriving in a steady flow.  At last Ricker decided to hold a special employees meeting to find out what was going on.  This he did, and suggested anyone interested in the project would be welcome to lend their talents – providing such donated time was after regular business hours.

A few accepted the offer and within a short time many others followed suit until the agency was teeming with as much activity in the evening as it was during the regular working day.

And so goes the story.  Ricker and his helpers designed, built, welded, cut and installed all of the special components needed to unite the various segments of the car.  As yet, the back ordered engine had not arrived so Ricker sheepishly installed a Mercury – temporarily, you understand. 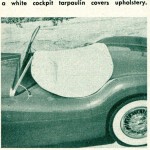 When the time came to mount the body, Ricker was as happy as a kid with a new toy.  Four men easily lifted the body and carefully set it onto the chassis.   As expected, everything aligned according to plan and all that remained now was to wind up the detail work – painting, upholster, etc.

The painting was left up to the agency’s paint department, naturally with the job being carefully supervised by the boss himself.  The color chosen was Nash’s popular red.  John’s Auto Tops of East Los Angeles was responsible for the building of the seats and all of the upholstery including a white cockpit tarpaulin.

The upholstery is red and cream Naugahyde with a profusion of rolls and pleats for a distinctive touch.  The group-built car is a tribute to the men who worked on it and Ricker boastfully states that the project made for more amicable relations between his men and himself, thus setting an example which many other people under similar circumstances would do well to follow.

So….based on this story it looks like we may have identified the first Glasspar G2 to have used a ’51 Nash grille.  The details of the story suggest that Tritt reworked a mold for the front of the G2 so that the body could accomodate a Nash grille if requested.  Apparently this was done specifically for Mike Ricker.  And we’ve found several G2s with Nash grilles, so many more than “1” were made.  It remains for Rodney Packwood and I to see if we can locate the Ricker G2 and identify its serial number.  If all G2s with Nash grilles have a serial number which follows after the “Ricker G2,” then we have our smoking gun.  That is, the Ricker Glasspar G2 with Nash grille would be the “first” Glasspar G2 with such a grille.

Matt Tritt also told me that Glasspar employee/manager Otto Bayer’s favorite car was a Nash.  In fact, you can see Otto’s personal car – a Nash – in the background of several early pictures showing Glasspar HQ – including some of the photos from the Life Magazine photo shoot.  Matt has always theorized that Otto’s love and passion for the Nash car (he was a Nash enthusiast all the way) led in some way to the design and use of the Nash grille in the Glasspar G2.

Bill Tritt had told me that the use of the Nash grille was serendipity.  A Nash grille was on the wall of his shop area in Glasspar and someone noticed that it might fit the contours of the G2 front nicely.  Bill said they decided to see if it would work and….history was born – and probably 4-8 cars with this Nash grille too.  Rodney and I have already found at least 5 cars – some of which may have had their original G2 grille damaged beyond repair, and a substitute ’51 Nash grill and fiberglass fabrication up front completed to accomodate it. 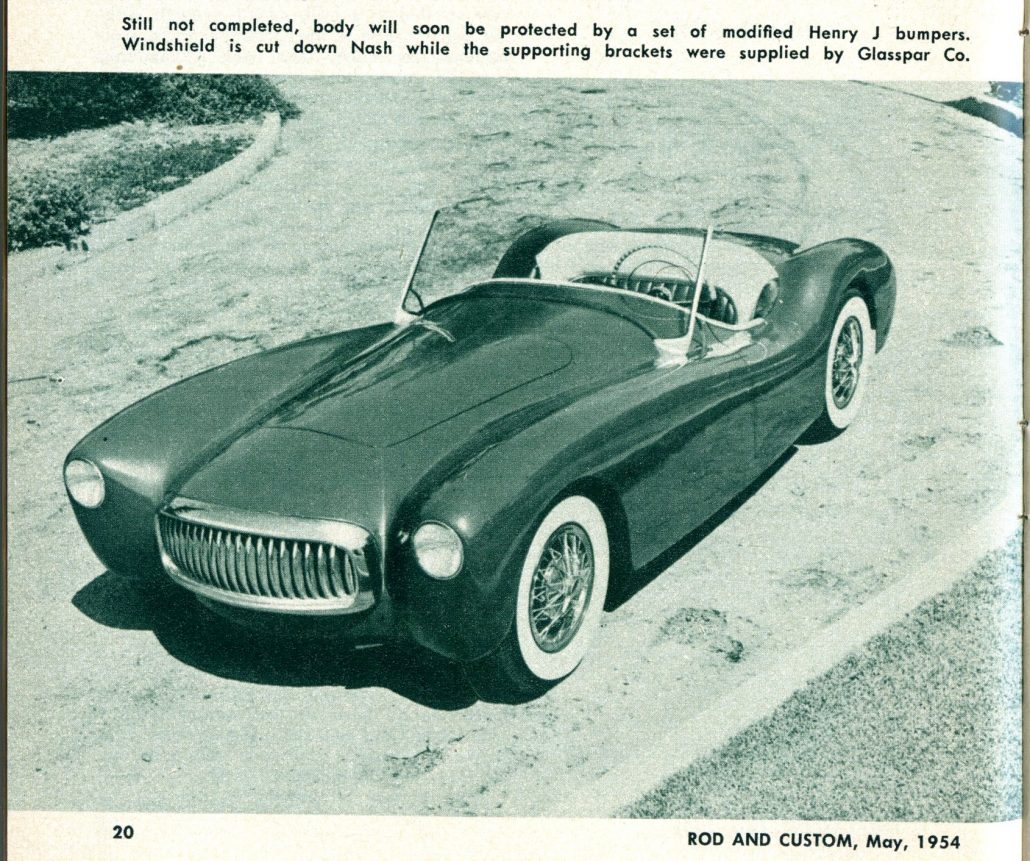 What a great story here gang.  Two for one!  First, a story about the history of fiberglass and how it was used in cars – by Dean Moon, no less.  Then…a story about what I consider to be one of the most interesting Glasspar G2’s built – with all the right stuff and an incredible level of “build.”

And….Ricker’s Glasspar G2 was used in Motor Life Magazine in August of 1954 for a “Johnny Dark” publicity shot – one of the most memorable of all ‘glass car photos of the period.  And…color photos of it exist as shown in our story.  And…the Ricker family has more photos and will hopefully make those available in the near future.  The car was built with the first commercially available frame for a Glasspar G2, built by the renowned Shorty Post of Post Body Works in Orange, California.  And it was built by an auto dealership with the skills and knowledge to build the sports car correctly. 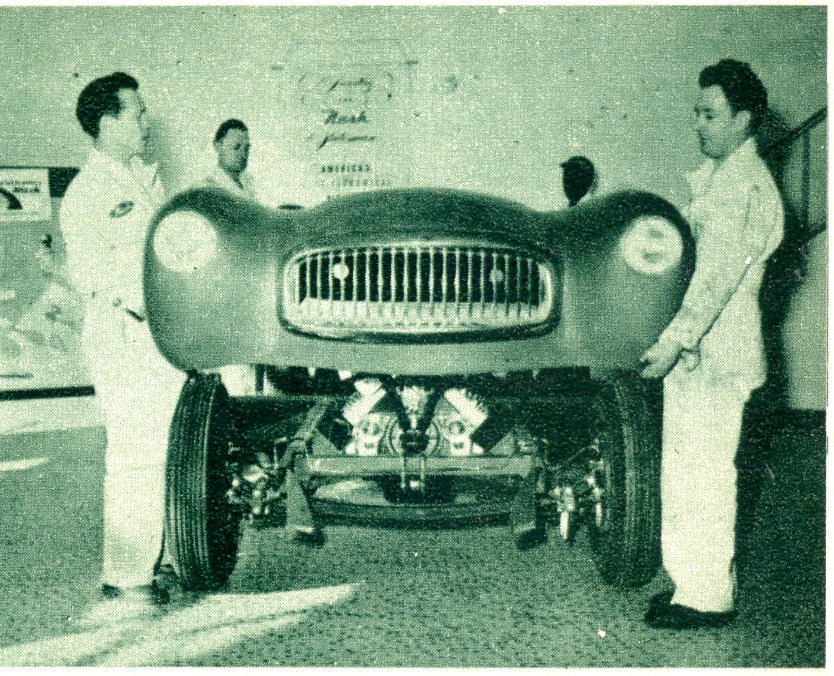 And….it was drag raced at Santa Ana – and we have pictures too.   And did I say the story above was written by Dean Moon?  I guess I did 🙂

No one knows.  Although several Glasspar G2s have been found with ’51 Nash grilles (and other Nash grilles too), this particular car has never surfaced.  But maybe that’s because we didn’t have the detail shared in the story today.

So…go forth and ye shall find.  See what’s out there gang and for those of you with Glasspar G2s that have a Nash grille….you may be one lucky ‘glass car guy.

If you find it – let us know.  We’ll feature the story here at Forgotten Fiberglass, of course! 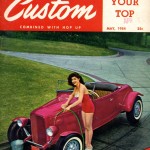 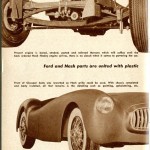 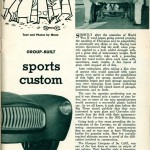 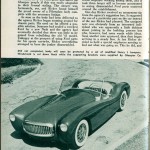 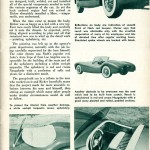 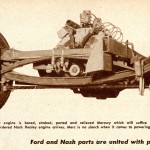 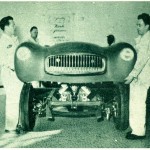 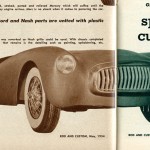 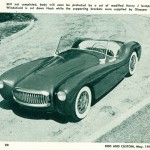 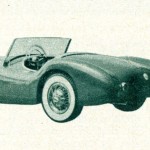 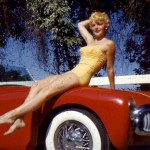 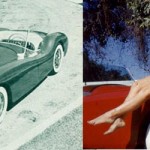