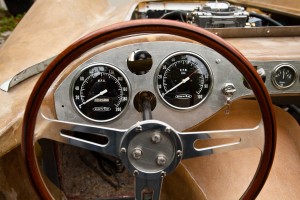 I recently heard from Jim Collins – he was referred to our website by Phil Fleming who is a Devin owner and “sports specials” enthusiast.  Click here to read more about Phil’s Devin Sports Car.  Phil had seen some pictures of Jim’s car in the process of being built and was duly impressed.  When Phil speaks, I listen, so when Jim contacted me I was very interested to see what had peaked Phil’s interest so intensely.

I now know why.

What I was confronted with was a beautiful build of a car – in progress.  The car had been started most likely in the 1960’s and had been in a continuous state of “build” ever since.  Jim was determined to bring this “build” to its completion, and began immediately.

But Jim’s not a newbie to specials.  Some of you may have seen the Byers MG based CR90 special he built many years ago.  A very impressive “build” and car.  He’s also owned some other cars that you’ll be intrigued by in his story below.

Let’s allow Jim to tell the story about his car and interest in his own words. 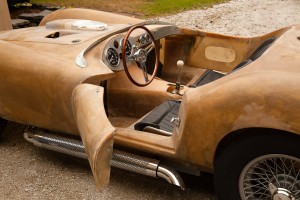 My name is Jim Collins and I have a wonderful Devin SS Jaguar Special that I have been working on for about 2 years now. But before I tell you about the Devin. Let me tell you about myself.

I have been interested in Sports cars for over 40 years, restoring them, vintage racing them and buying / selling, cars, parts, books and anything that has to do with the vintage sports car hobby I have been into. I even wrote book reviews for a national car magazine.

The Devin came to me about two years ago. It was only a body, frame and running gear with gauges and badge. I got the car from Calif. and was told that the car was built some time ago and they did not know the build date or the frame constructor. I have had some experts in Devin cars look at the body and it is a early original Devin SS body with the lower headlight nose and thin fiberglass construction.

I have been working on the car nonstop until a few months ago. I started by inviting a few of my chassis building friends look it over and they all loved the chassis, but we did add a few extra frame members for greater strength and that was all it needed.  Besides replaced the rusted out Jaguar front frame members that needed replacing.  Everything on the frame cleaned up beautifully. The frame was well throughout and well welded. The rear cage (which is Jaguar XKE) was bolted directly on to the frame. The front frame mounting points are set up to bolt directly to the XKE subframe on the outer rails and the inner connections are welded in place.

I have a new Chevrolet 350cc 290hp V8 create motor installed, that bolts to a cross member brace at the front like they did in the 50’s. The rear engine mounts are on the sides of the bellhousing like used in many of the 50’s trunks. At the back is a normal transmission mount in the center. The engine is mated to a Richmond T10 4speed which has been rebuilt.

The jaguar XKE front suspension was completely disassembled and rebuilt. All new brakes, bushings, rubbers, shocks, wheel bearings, tie rods, ball joints everything. I installed a large 3″ wide Alum. radiator at the front along with a 14″ electric fan.

The rear end also was removed and totally rebuilt. New shocks,springs, brakes, rotors, bushings, bearings, and the list goes on and on.  The drive shaft was made along with new joints. Above the rear I mounted a 20gal Alum. fuel cell and electric fuel pump.

Next was the body. When I received the car, it had the typical Devin double hump on the dash (to have left and right hand drive ability) but I took the liberty to remove the one on the passenger side.( I still have it) Then I made an alum. dash to fit my instruments into. After that I needed an inlet for the gas (the car came without any gas filler hole)

I placed a large aluminum gas cap like used on Devin’s in the middle of the back over the fuel cell. Everything else on the body was retained as original. For front headlights I used the Ranger Driving lights made by Lucas. They look great and give excellent illumination. All of the other lights are correct for the Devin SS (Corvette lens at the rear and Impala lens at the front). 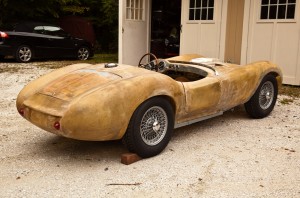 The grille is hand made from 1″x1/8″ aluminum welded at the back, the seats are aluminum with black leather custom fitted. The steering wheel was custom made for me by a professional wheel maker and I custom made the windshield frame.

This car has a beautiful shape, Bill Devin really got it right.

What a great story and a significant build in every way. 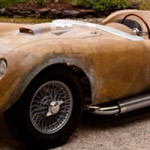 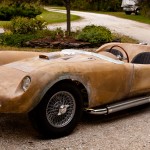 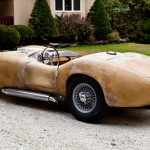 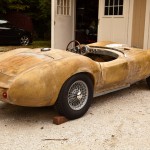 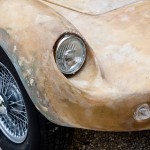 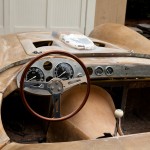 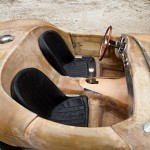 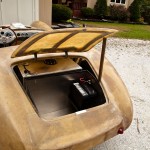 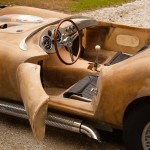 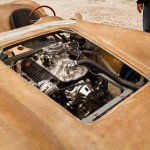 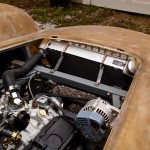 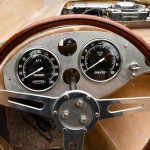